After a short hour’s flight I landed in Cusco the old Inca capital. It’s 3400m above sea level and so altitude sickness can be a problem for some. Who it affects is random. They often suggest tablets before setting off and though I did purchase all the medications to survive it I decided to risk not taking anything. I was ok generally. I felt a little light headed and Olga said don’t go out trying to do anything even small but to rest for two days to allow the body to adjust. 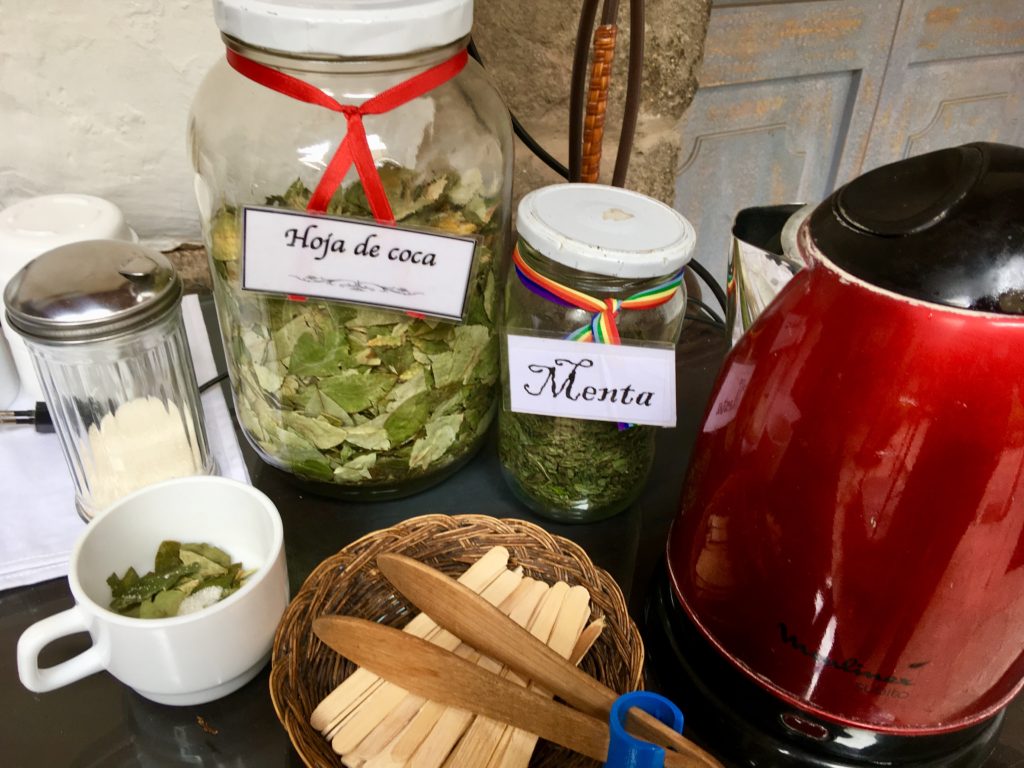 The hotel provides coca tea to help with the altitude. Made from the leaves of the plant that is harvested to extract cocaine it is a light green tissand. It doesn’t have the same affects as cocaine as an alkaline substance is needed to extract that from the leaf. The bundles of coca leaves that are chewed are made up with an alkaline powder wrapped inside them but I’m sticking with the tea and the coca sweets and toffees. 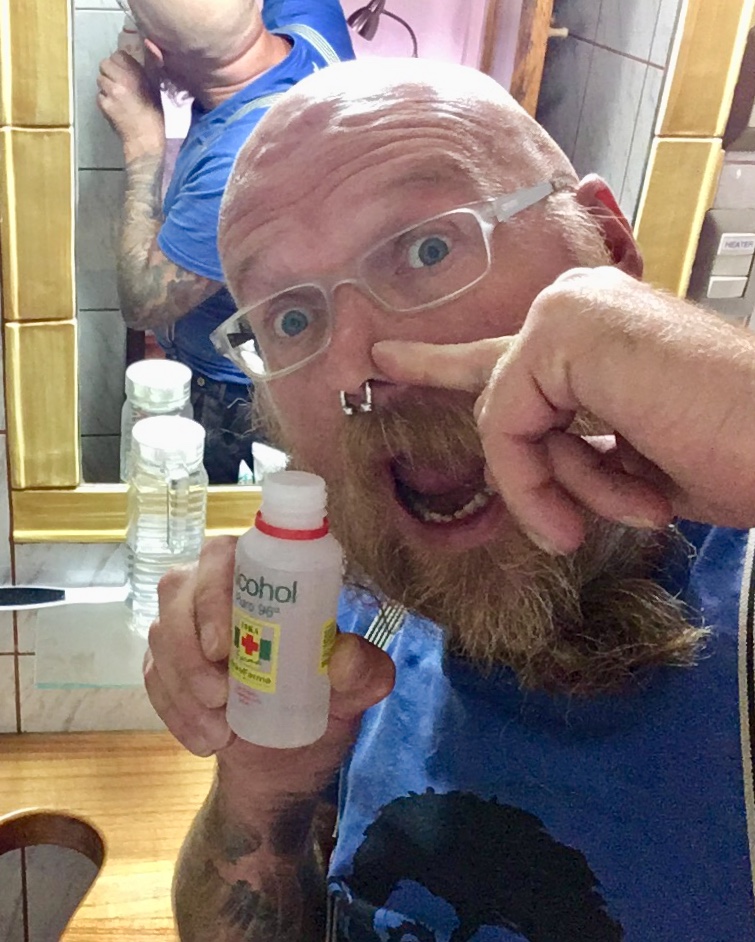 Oh and the neat alcohol that I’ve been told to snort. It’s feeling a lot like bad poppers in a wonky gay club up here in the Andes. As I’m here for nine nightstand need to acclimatise, I decide to put off Machu Picchu until later in the week to give myself time to adjust properly. 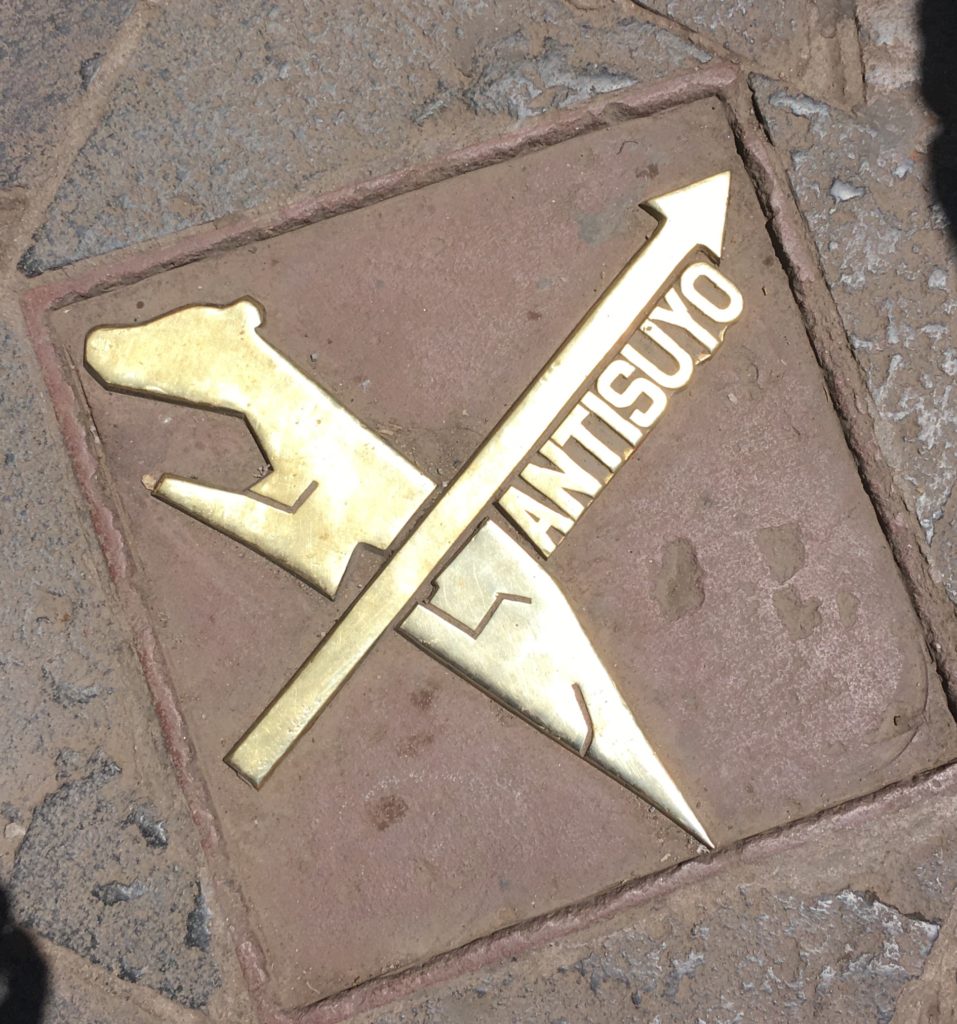 Cusco is a very colonial city and is full of Spanish buildings that were built directly over the remains of the Inca town. I notice there are a series of gold designs in the pavement all around here. Antisuyo is a representation of the puma and was so integral to the Inca world that much like the Nazca Lines the old city was designed around this shape though it remained unfinished by the time the empire fell. 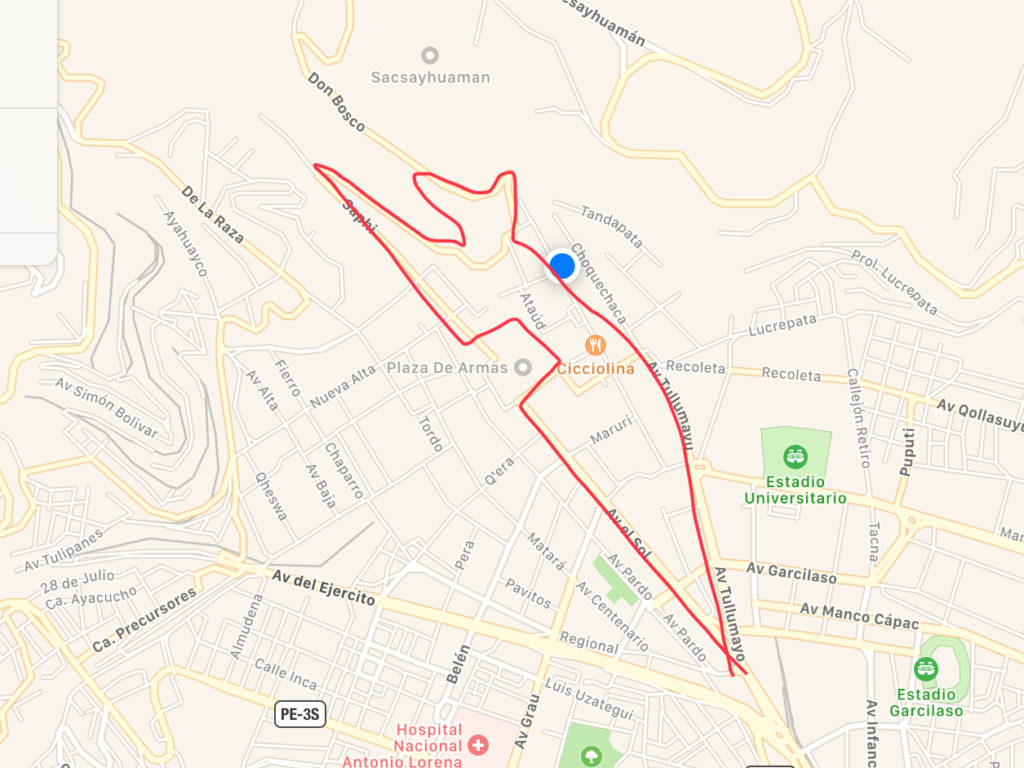 It’s easy to spot the original Inca walls as they were all built in the famous snug fitting huge blocks that were slotted together with no gaps and no mortar. 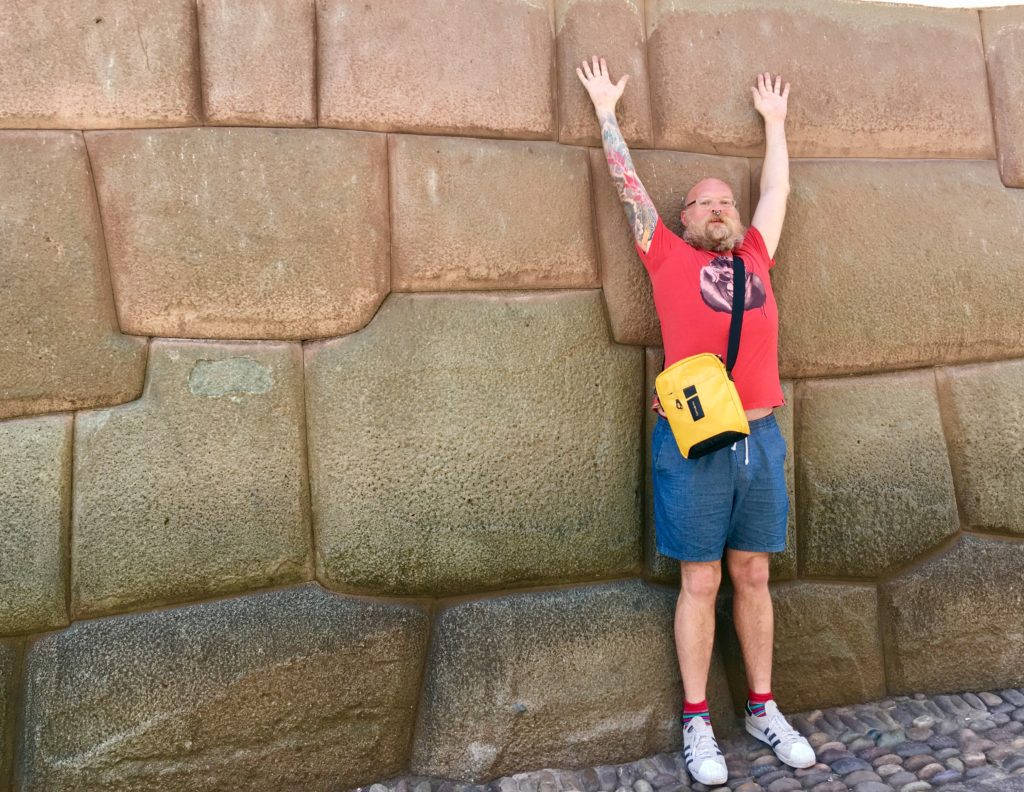 Some of the stones are so famous that they are known as the 12 sided stones as they are perfectly hugged with their 12 uneven edges into the surrounding stones. Genius stone work. 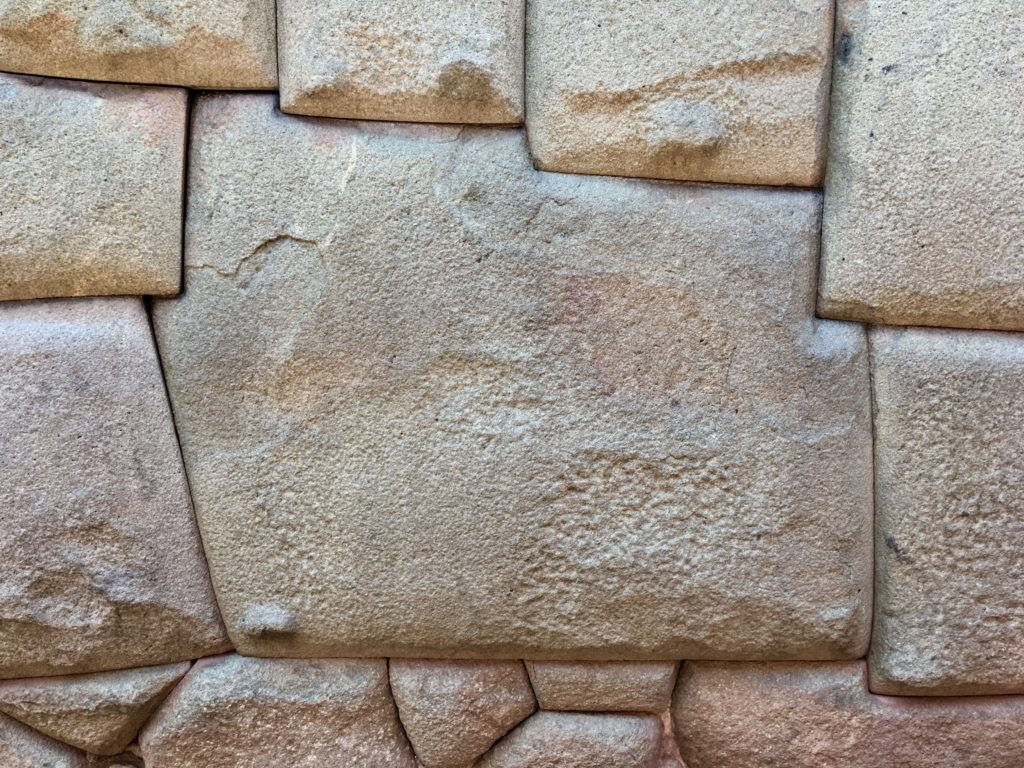 So skilled were the Inca stone masons that the Spanish found it almost impossible to break apart. The colonial additions to the Inca walls are easy to distinguish as they are cemented together with think mortar. 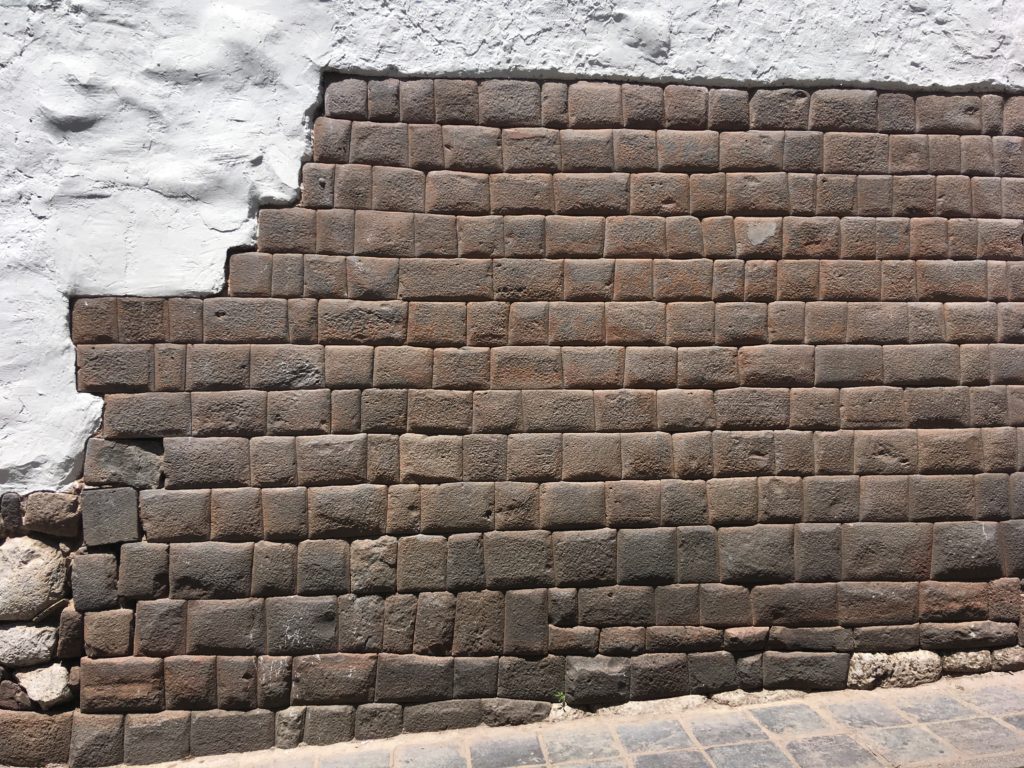 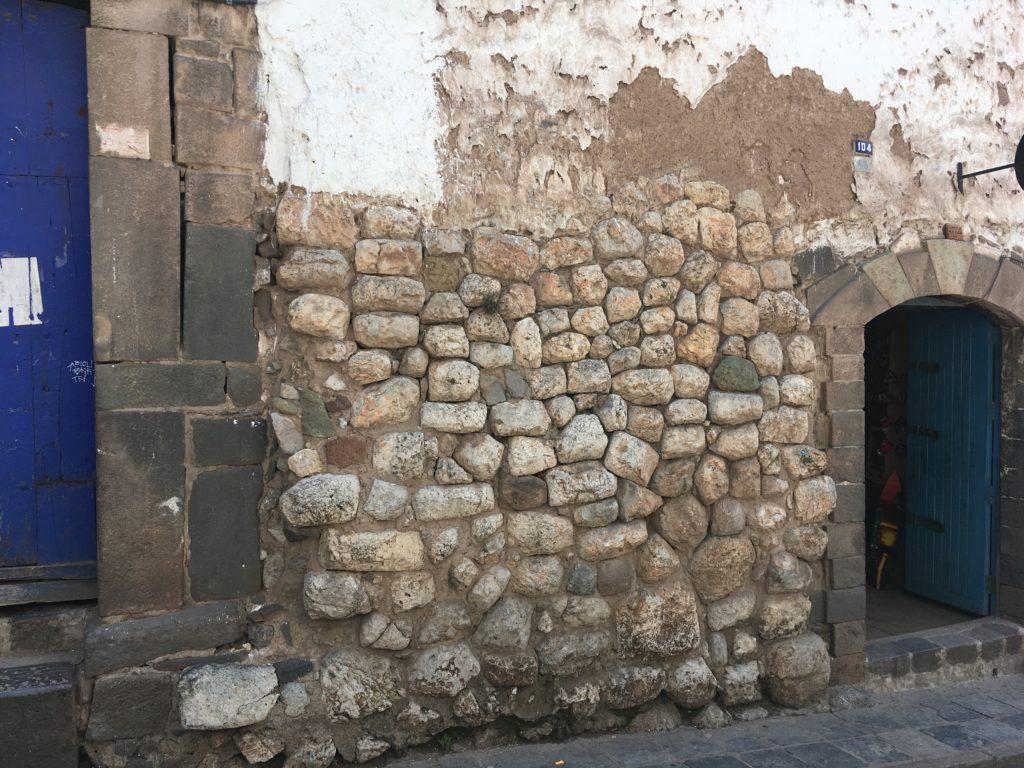 These Spanish halls and houses are decorated with beautiful wooden balconies that jut out from the white plaster constructions. With the half pipe tiling on the roofs and the overhanging edges there is a reminiscence of the forbidden city in Beijing. Especially when seen from high above. 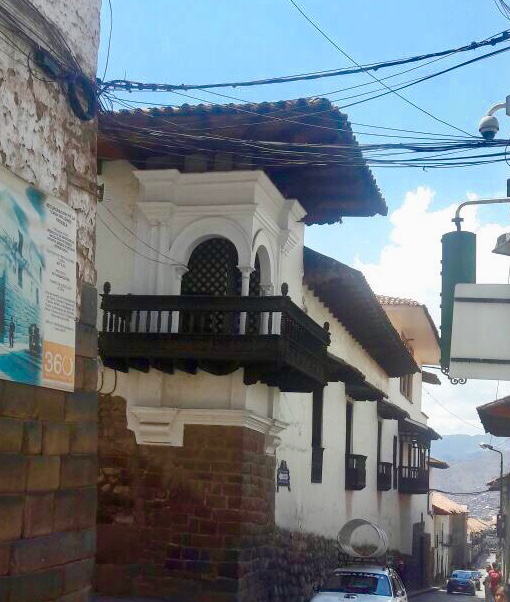 The first day I venture out for a short breathless walk I visit the ruins of an Inca palace close to my hotel. It is totally free and helped me to begin to understand the Inca world and the themes of its architecture. 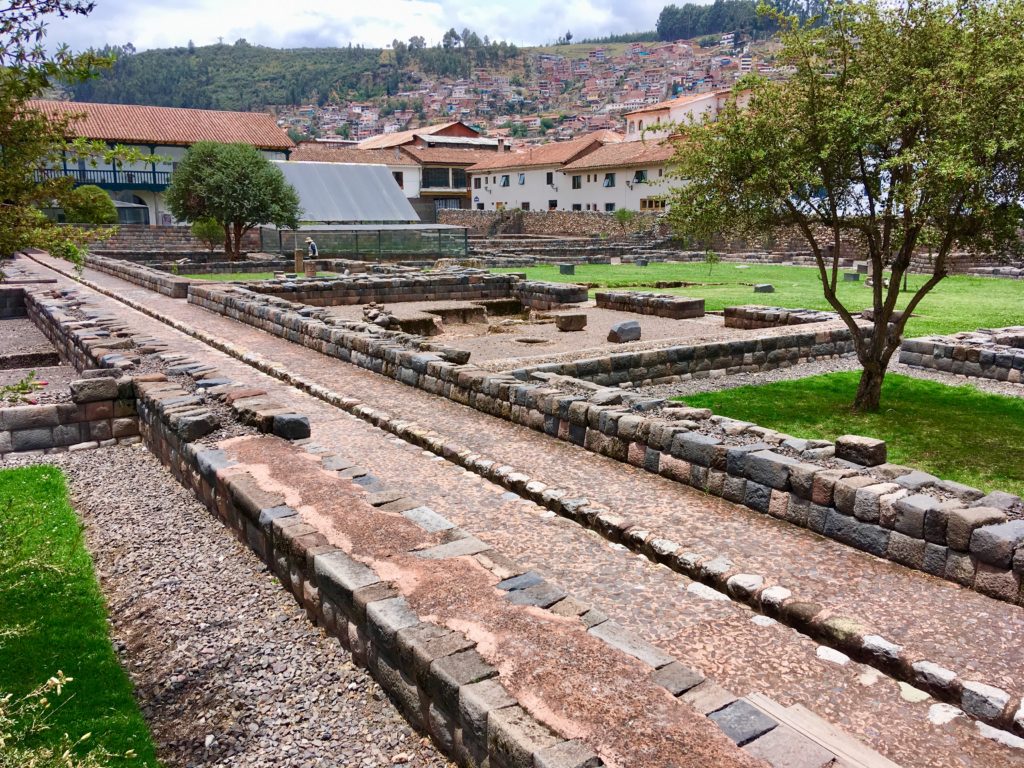 Walls slope backwards as they get higher and the trapezoid shape is used for doorways and windows. 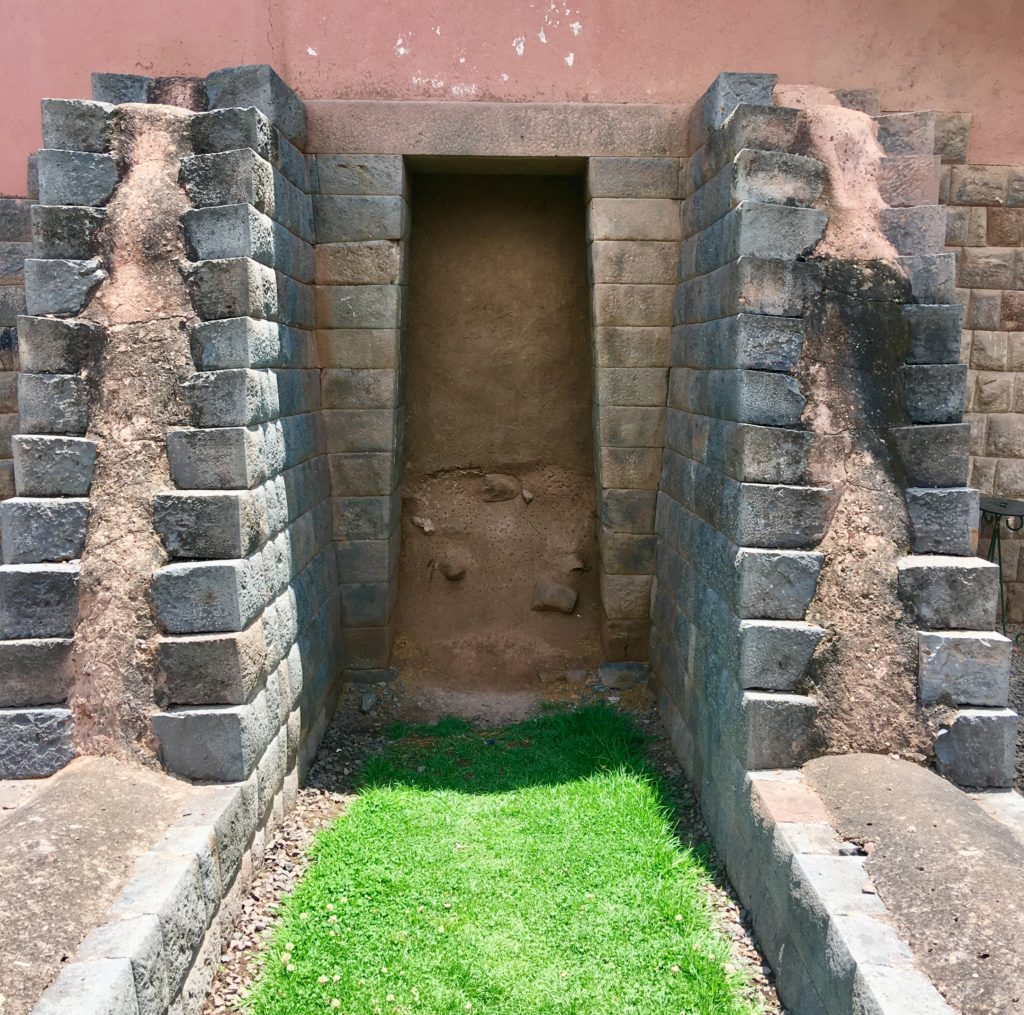 The other amazing thing is the small channels that run along the centre of roads to carry water. It’s an open plumbing network that links up the city and many are still present in the streets today. Not just in the ruins. 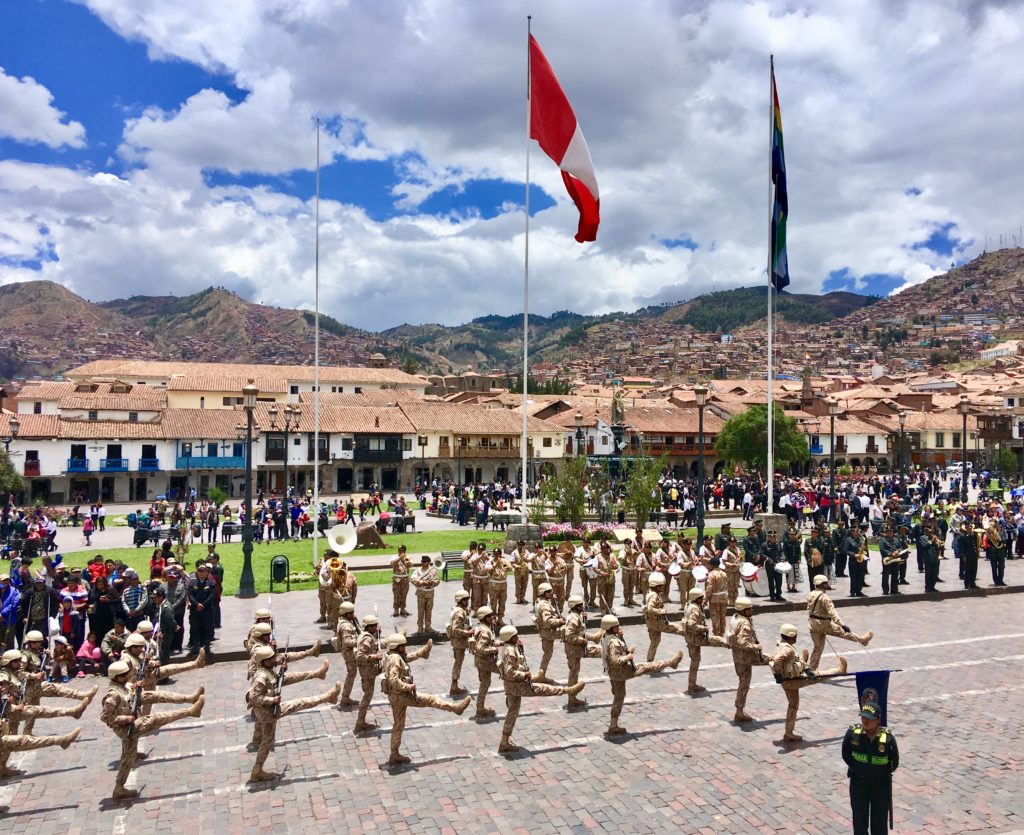 In the main square, Plaza De Armas on Sunday I get to see a military parade complete with goose stepping. At high altitude this seems quite a remarkable feat and yet as the band played on they all lifted their legs to waist height in perfect timing. What this had to do with the theme of the parade for Mary and the orphans I found a little hard to understand with all the machine guns on display but it was fun to watch. 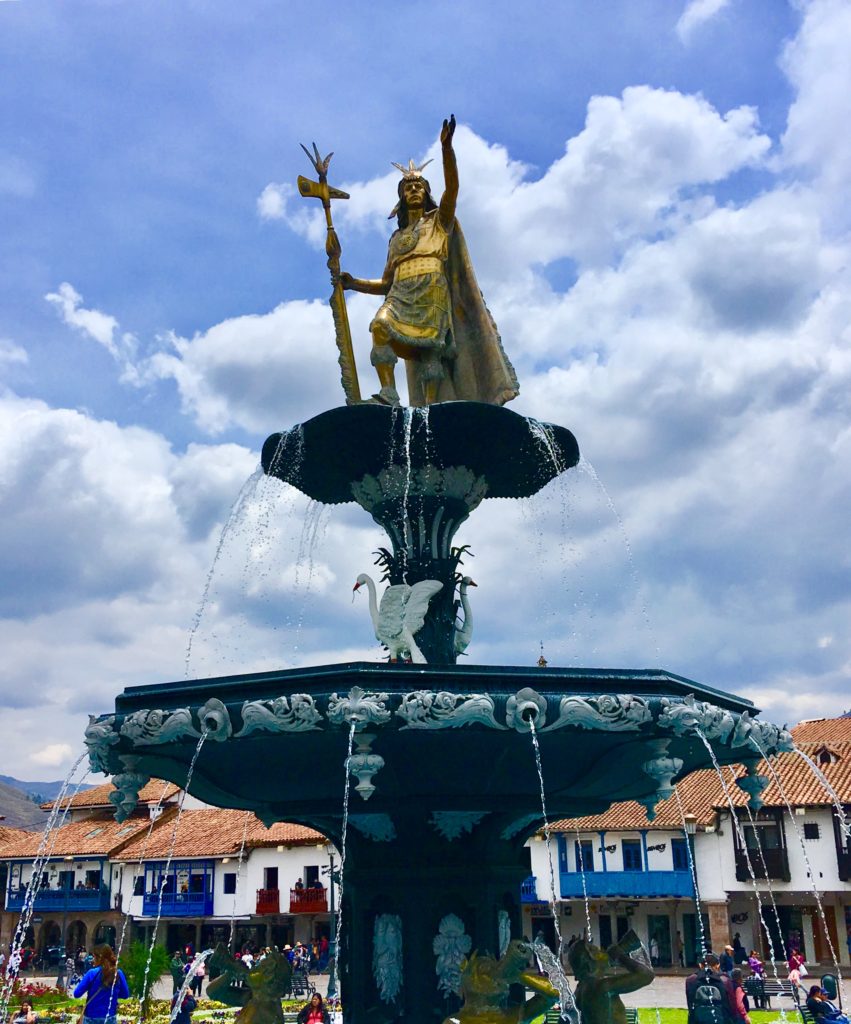 In the centre of the square is a fountain featuring the Inca warrior King Pachacuteq 1438-1471/2. His name means he who overturns space and time in Quechua. He turned the hamlet of Cusco into an empire so powerful and vast that he overthrew the Chimú and his empire stretched across almost the whole of western South America. 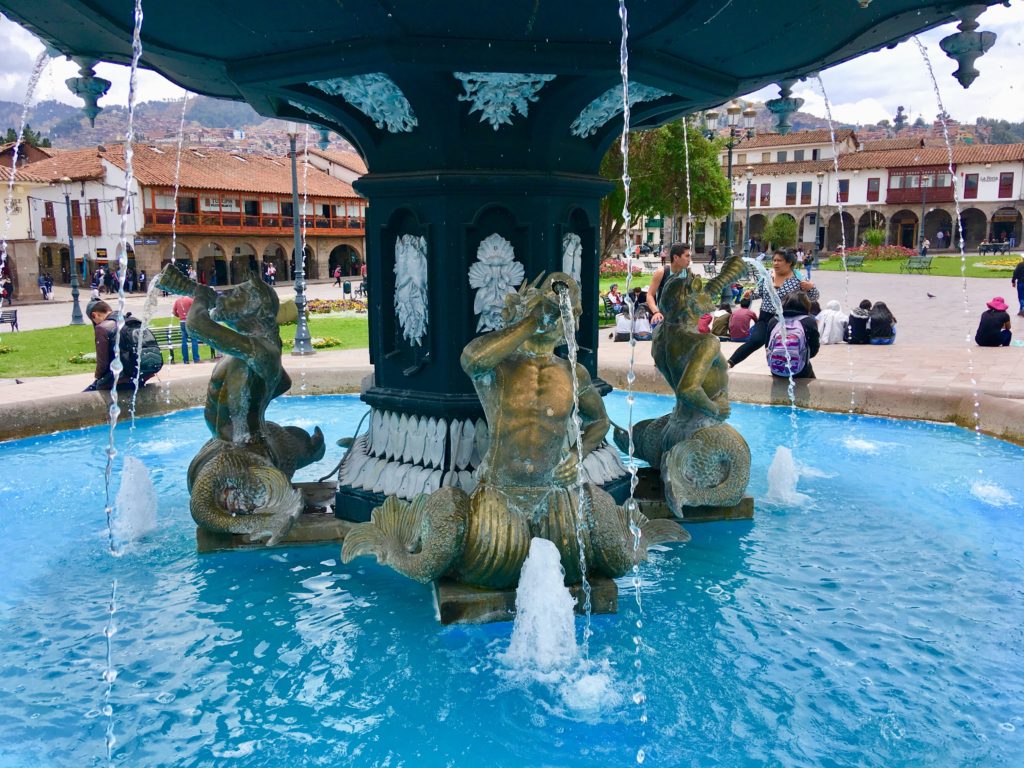 The fountain was covered up and then King Pachacuteq’s fibre glass figure was unveiled in 2011. During the unveiling a faux stone Inca platform covered the fountain so that Pachacuteq seemed to rising from the bubbling water. Eventually the fake plinth was removed and he remains in the upper basin of the old colonial fountain. Previously a statue of a Native American Complete with bow and arrow stood there though this too was not originally meant for the fountain. There was and is still much controversy surrounding this golden king. There are those who regard the placing of the Inca monarch as having been put there illegally in this UNESCO heritage square. Whereas other feel it is time to rescue the Inca past wiped out by the colonialists. 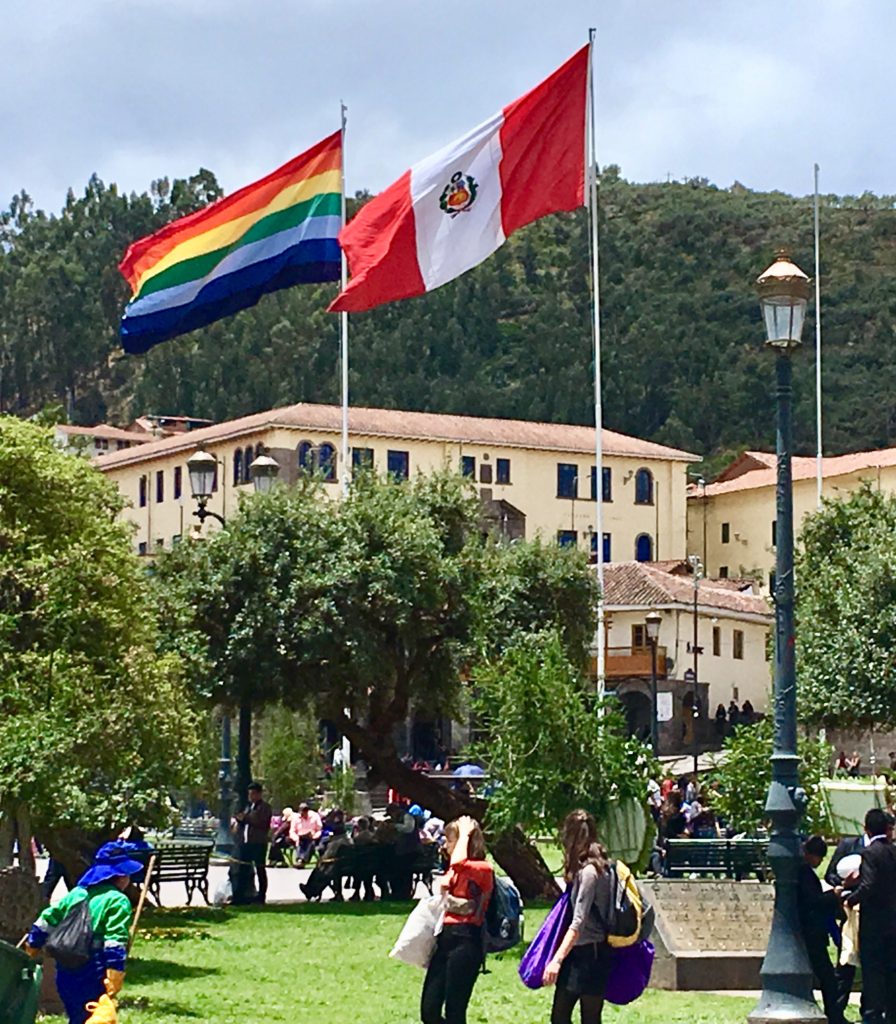 The flag of Cusco too that flutters high in the square is also a tad controversial. It was created by a radio host in the 1970s and looks very much like the Gay Rainbow flag but with extra colours. This flag is flown above many buildings and hotels throughout the town. Indeed it makes the place look the most gay friendly city ever. This flag is not quite recognised by the state as holding true origins. Though said to be based of the cultures of the Inca and Andes it is worth noting that these old cultures had no concept of flags at all. 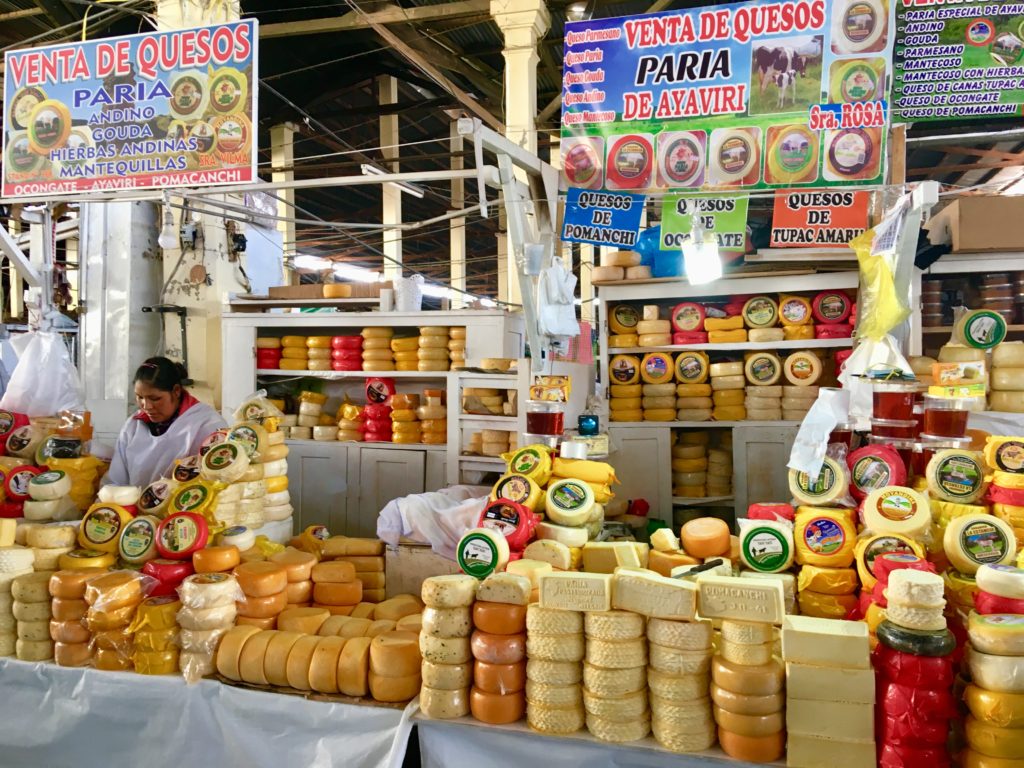 And so to the most important place in any city or town, the old San Pedro Market. Here in Cusco the market is huge and indoors and it is packed to the rafters with all kinds of foods, caterers and pedlars of everything you could ever need. 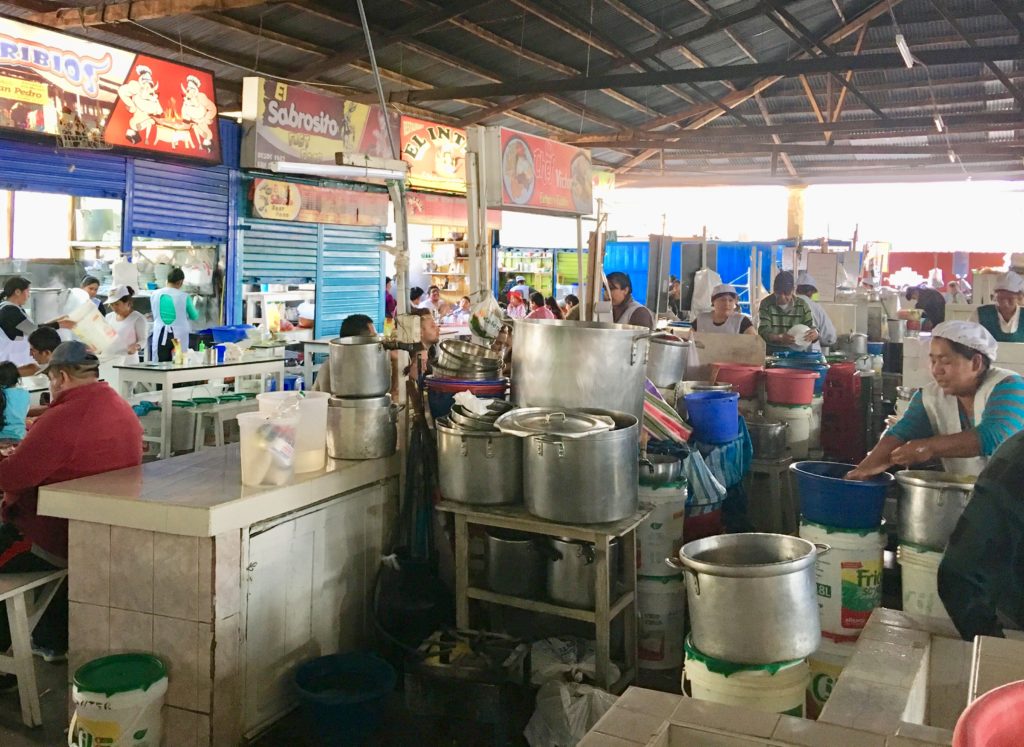 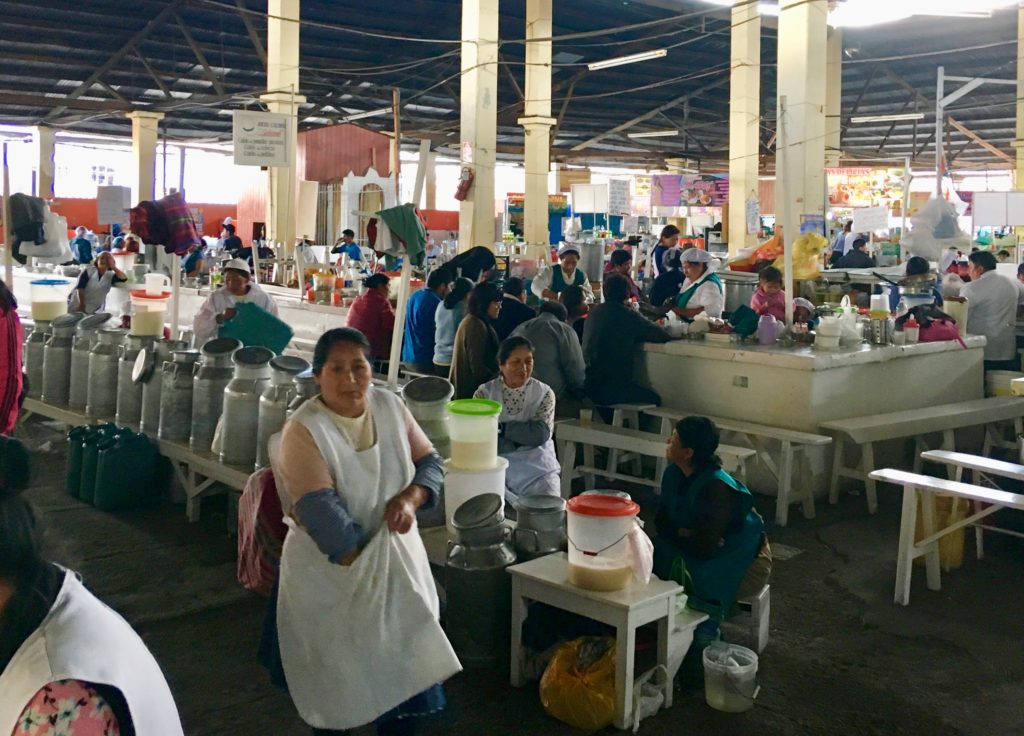 They are in rows in which the stalls side by side seem to sell identical items, or juice the same fruits and vegetables. They all call after you as you wander the isles just trying to feast your peepers on the vast varieties of things on sale. 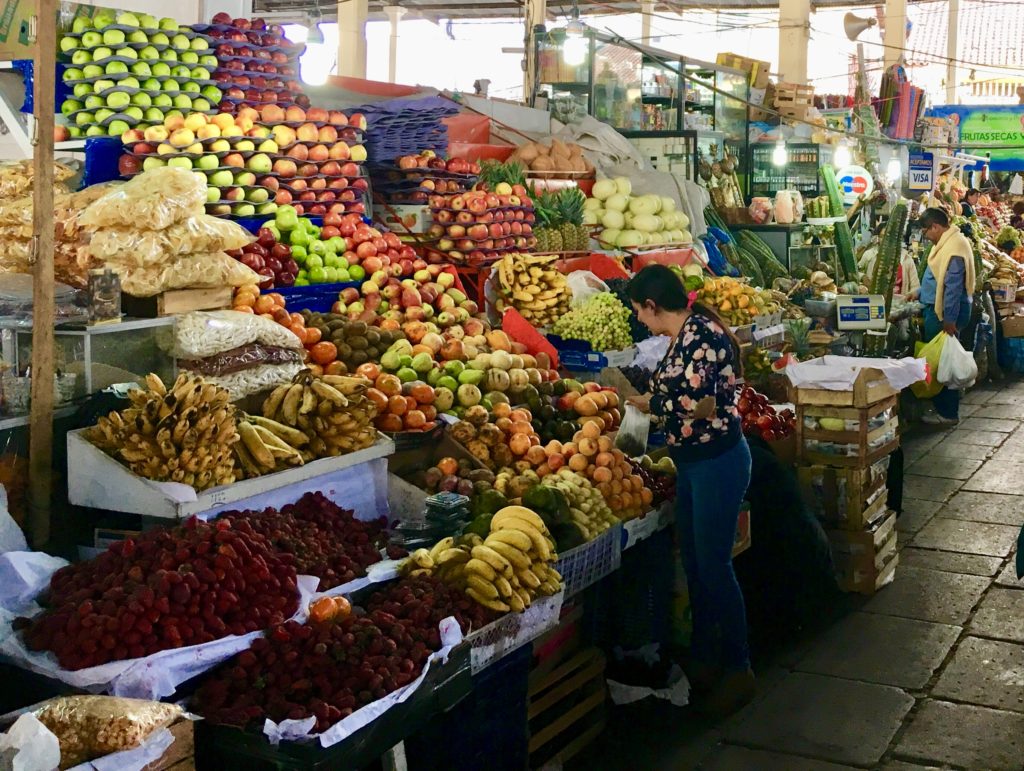 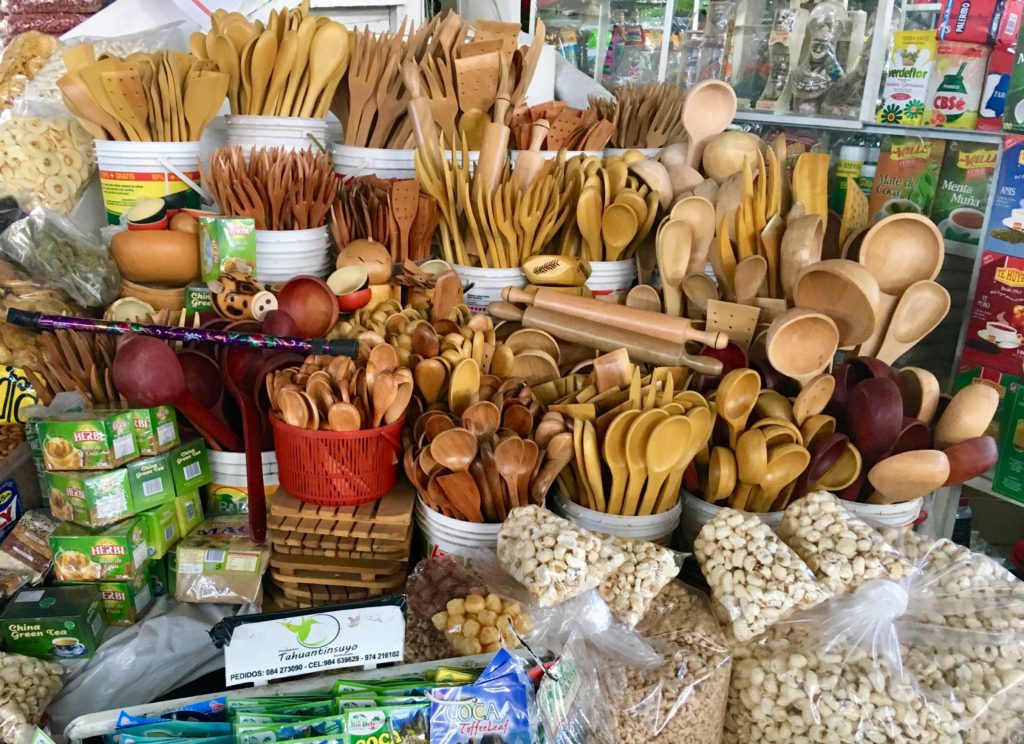 I try giant maize that is boiling away in metal vats over gas burners with soft Peruvian cheese. What a great snack. On the street you can see many sellers of fruits but most of these are ready peeled and chopped. I prefer my fruits a little fresher and so I stop to try tuna. Not the fish but the colourful fruit of a cactus. The vendor grabs a fruit from her wheelbarrow and peels it in a flash. Tastes like melon and soft berries. 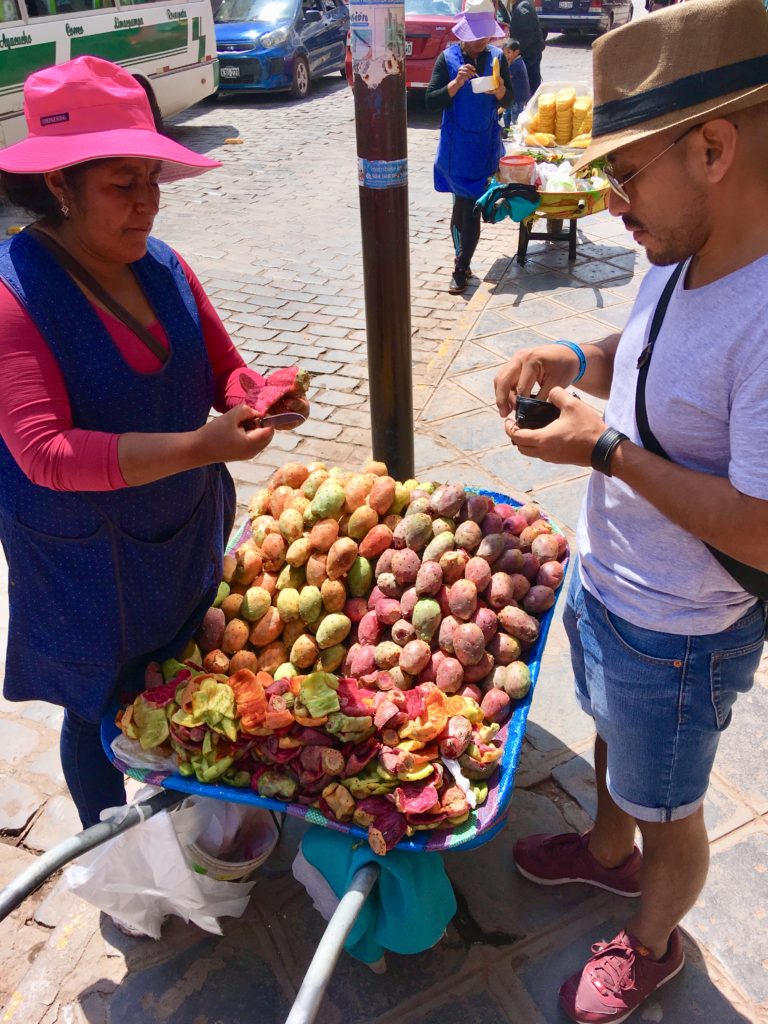 Before I go any further I must issue a WARNING TO ALL TALL PEOPLE – Peruvians are quite small and as such so are their doorways. Ive just opened a gash on the top of my head that will need protection from the sun. So I’m introducing my new blue hat. Say hi to my hat. 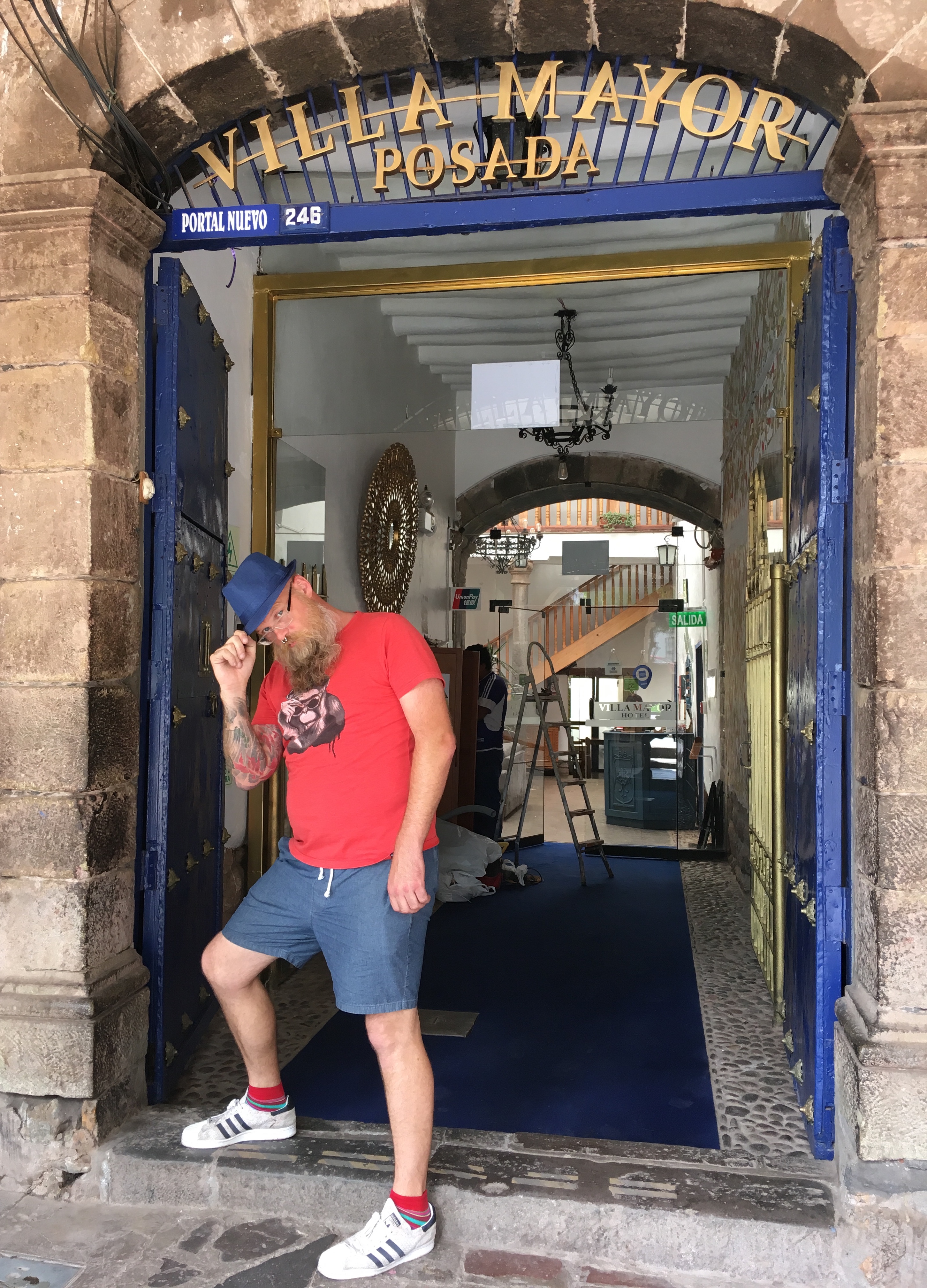