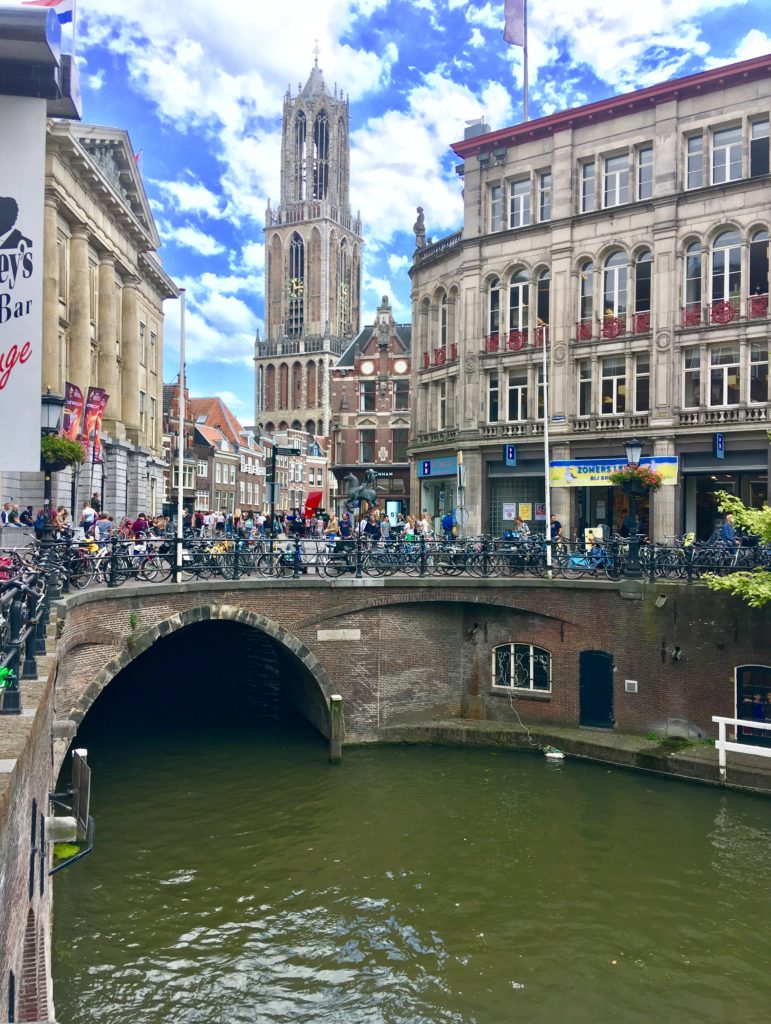 To the tune of Alicia Keys New York:

Utrecht, Dutch-brick jungle where dreams are made of
There’s nothing you can’t do
Now you’re in Utrecht
These streets will make you feel brand new
Canals will inspire you
Hear it for Utrecht, Utrecht, Utrecht! 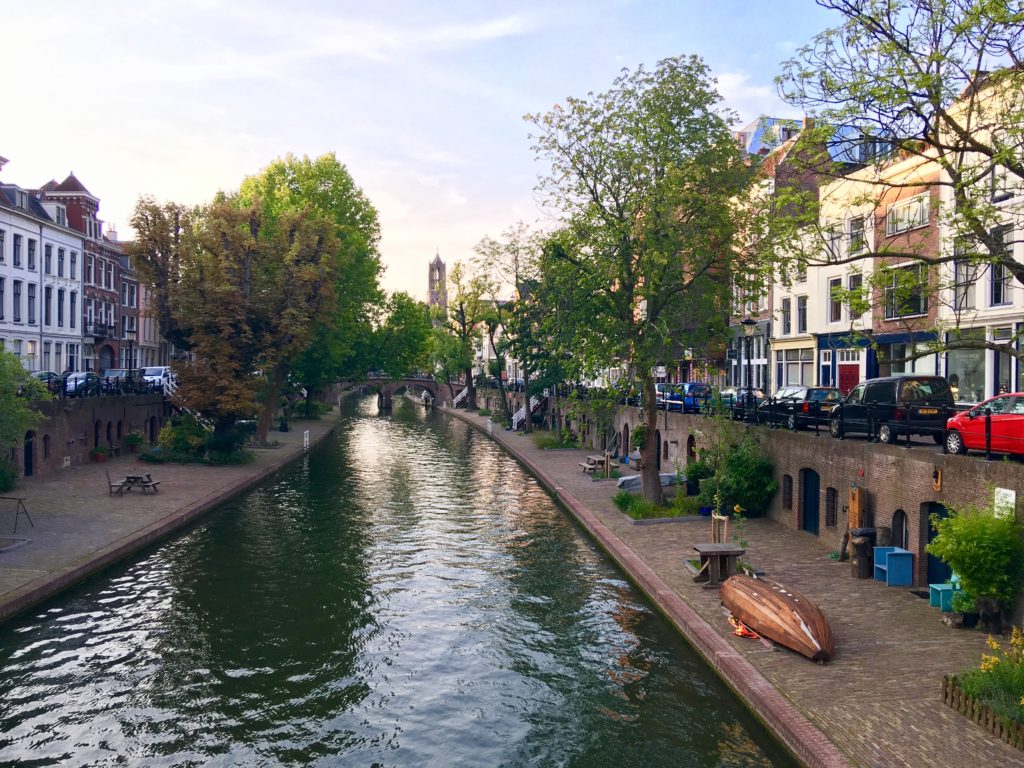 So I roll up in Utrecht and at once begin a love affair with this city like never before. I’ve booked an 800 year old cargo cellar cave on the Oudegracht for me and Utrecht to get to know each other much better. My fantastic accommodation I found on Airbnb and belongs to the wonderful Nan & Marco. A former sculpting studio it is now a superb flat in the very heart of Utrecht. Please stay there too if you want the best place in Utrecht. Marco & Nan are also the kindest most helpful hosts, so book now to avoid disappointment. 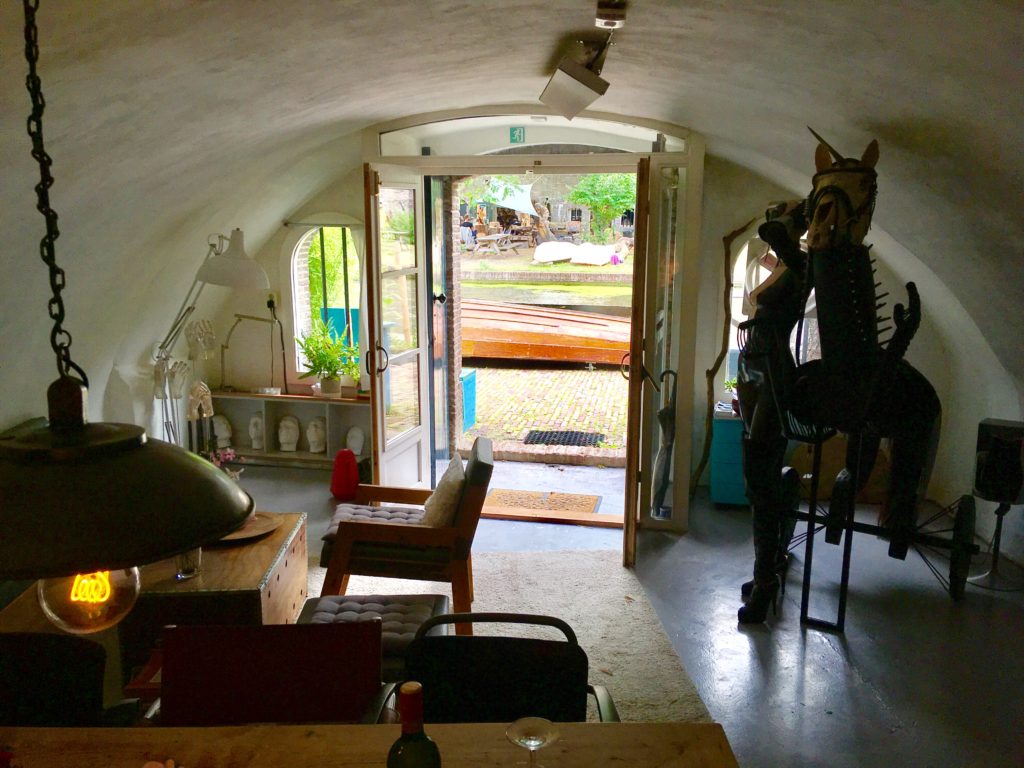 Situated on the Oudegracht or old canal it has a unique feature. The canal is built below street level and contains a series of cargo stores along its length. These medieval structures allow goods to be dropped off directly into storage. They run deep underneath the streets and join up with the houses and shops above. So goods were unloaded and then were taken directly up to the shops above. All the amenities you could require are a stone’s throw from the apartment. Including my much loved Albert Heijn supermarket just at the top of the steps from the canal. 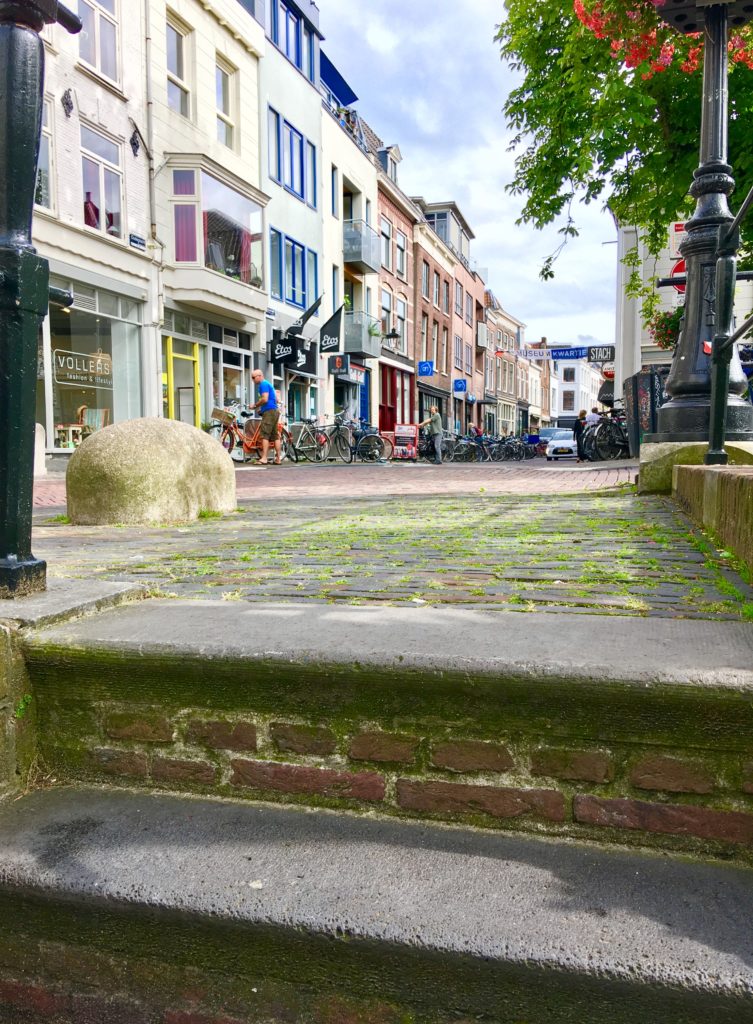 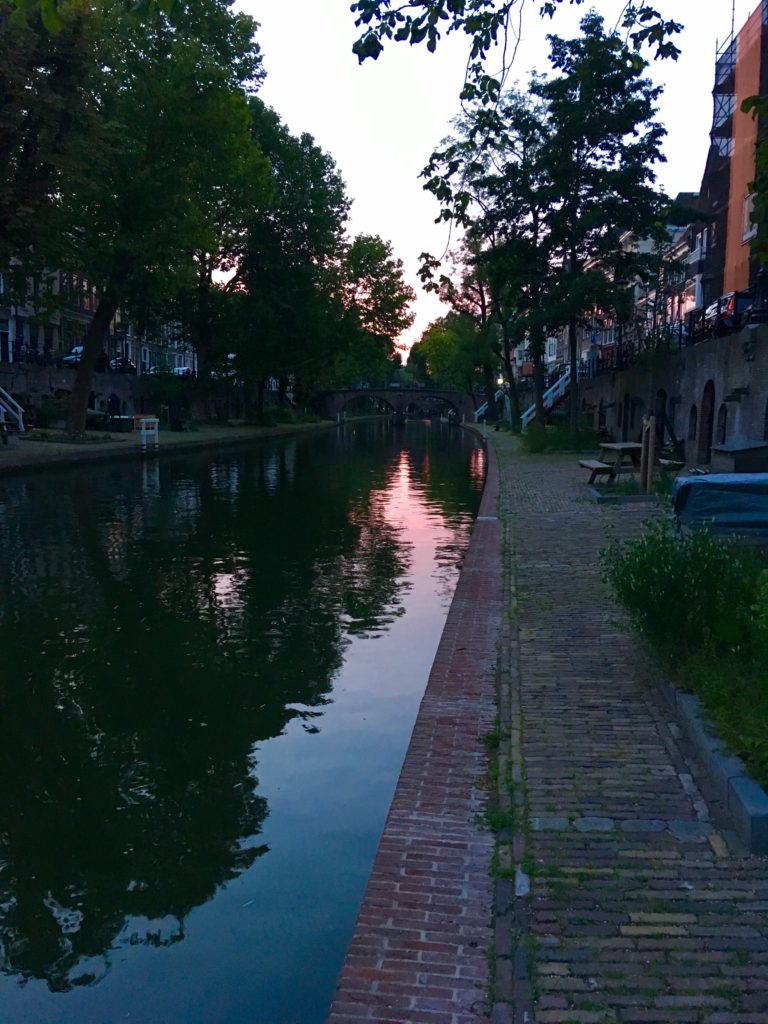 On arrival I feel instantly welcome and embraced. This is a city of such immense beauty and history that I am at first over stimulated by it all. The creativity floating up and down the canals is inside every brick. Each tiny part of Utrecht seems to be alive and fizzing with tales and ideas and the intensity of this is so loud and clanging in my head that I immediately write a poem. My first in years but that’s the power of creativity here in Utrecht. I then try hard to sleep as stories and ideas swirl around inside my very full head making me over excited. 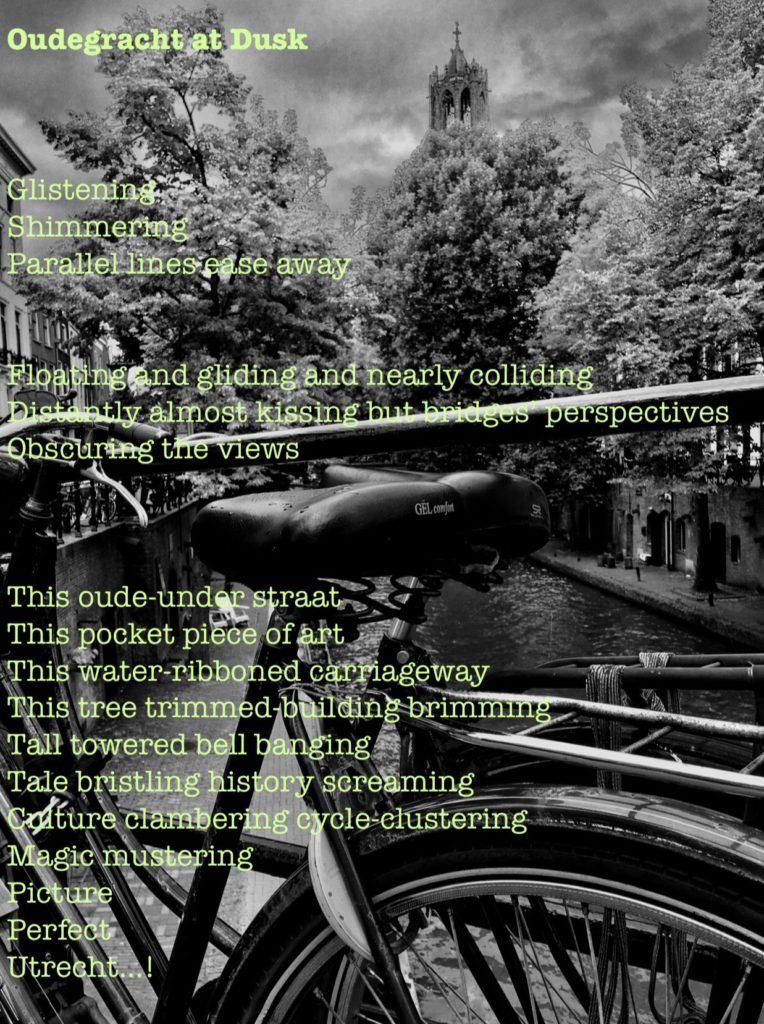 Utrecht began life as a Roman fort called Traiectum. As it grew the area outside the fort was known in old Dutch as ‘uut’ Traiectum, or outside Traiectum. Parts of the original wall city are now marked with a wonderful modern artwork that has been inserted into the roads and pavements. This brass boundary has an old roman road map running along it with Latin names of towns, cities and countries cast along it. There is a small gap from which steam rises at regular intervals. In fact it is cool atomised water and for weary feet in flip-flops on a warm day it acts as a refreshing tonic as you step across it. But that’s not its only trick. At night the boundary crack glows green and colours the clouds of mist rising from within the earth. Such an effective means to demonstrate the ancient history of a city. 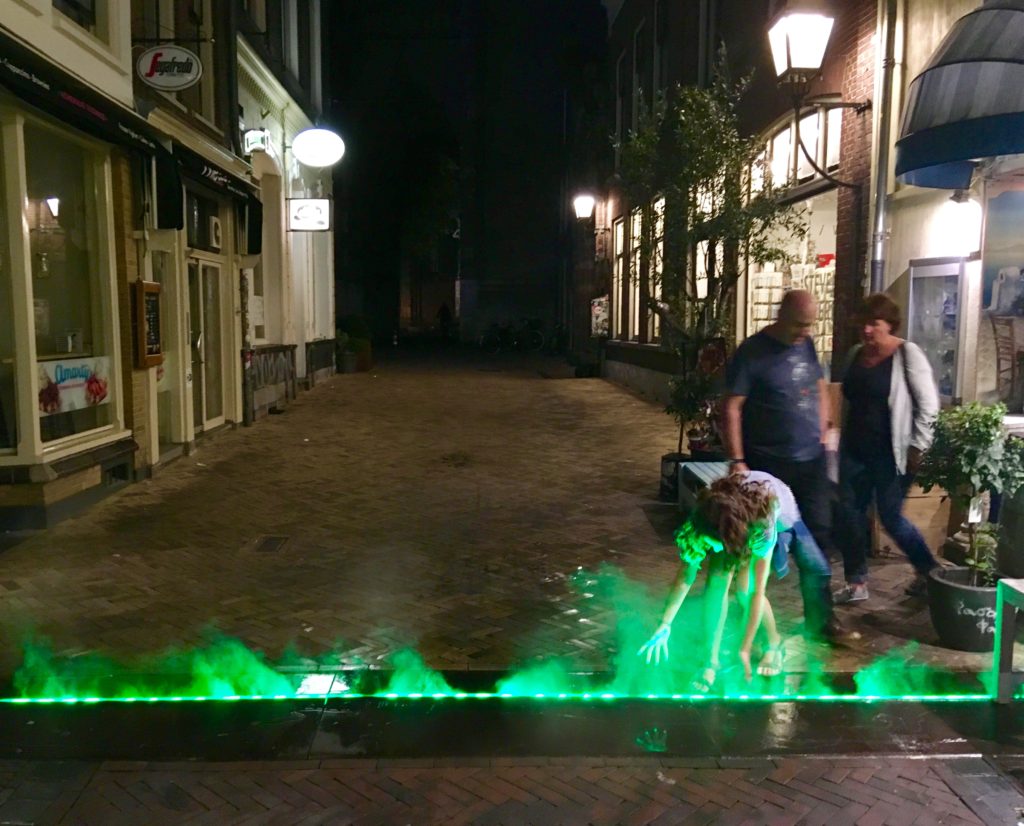 On the 2nd of June 2012 a poem was begun hewn of stone cobbles. Each Saturday at 1pm the next stone is added to this endless poem known as the Letters of Utrecht. What a fantastic artwork and surely demonstrates why words and poetry are in the very soul of this creatively rich city. 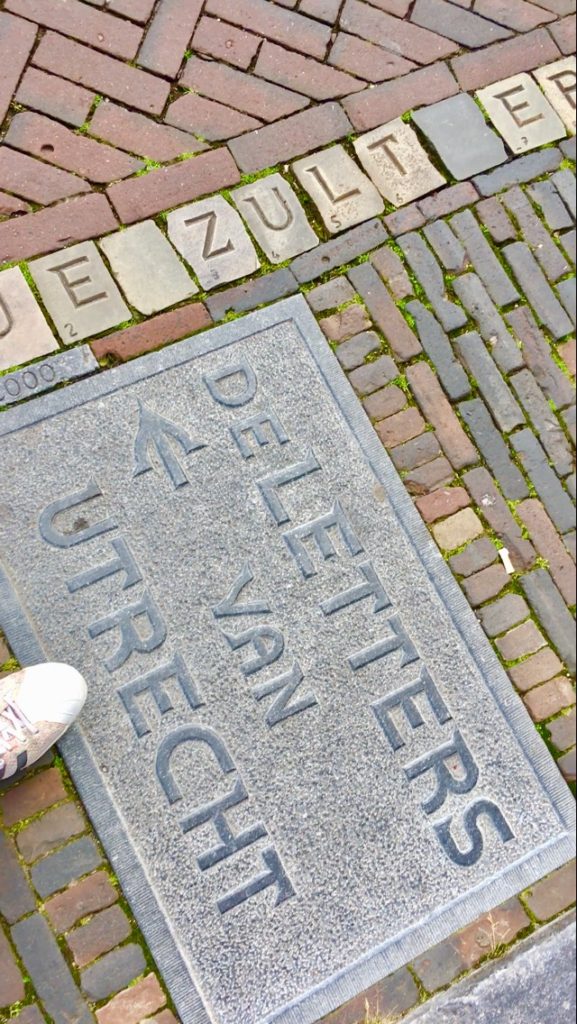 So I was inspired to write a further poem to my new lover, the city of Utrecht. What is happening to me? I’ve a creativity coursing though me that I can’t turn off. I’m not saying it’s at genius level or that my execution of poetry is great but it had to be expelled from my head. Oh Utrecht I love you, you magical place. 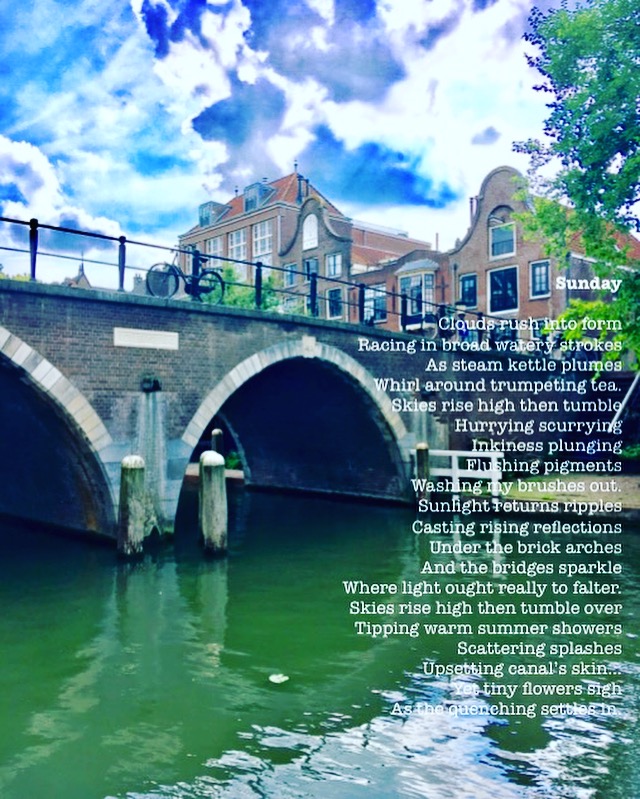 So as I relax on the canal edge outside my temporary home I watch as the entirety of Utrecht seems to drift by on the canal. The slow pace of the waterways seems to inform all life here. Nothing is rushed. Cars, bikes and people seem contented and happy. After all that boating about at the weekends the citizens of Utrecht seem to treat Mondays as their Sunday. Many shops open late or not at all. Folk roll in late to work and I say why not!

Yes Utrecht is becoming more and more popular with tourists but when you sit by the Oudegracht it is mainly local people that sail by in their boats. And they wave at you like you are local and have always been there at the side of their canal. Oh whoops… a third poem. I promise that’s all of them. I’ll focus more on Utrecht in the next blog. 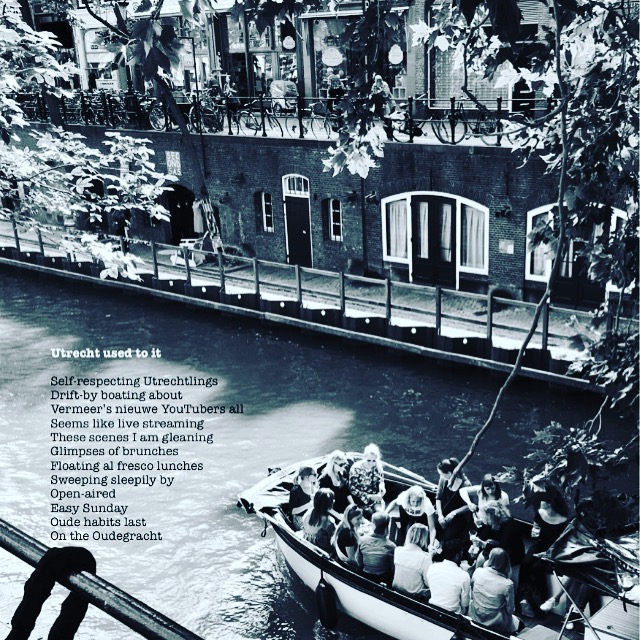