Perú is changing and rebirthing at such a rate that it even surprises its own residents. All around Lima you see new building springing up and replacing the old rather charming but run down dwellings of the last two hundred years. When Olga returned from London she said that hardly recognised Miraflores as the number of shiny new tower blocks that have risen all over this area made it feel quite unrecognisable to her. 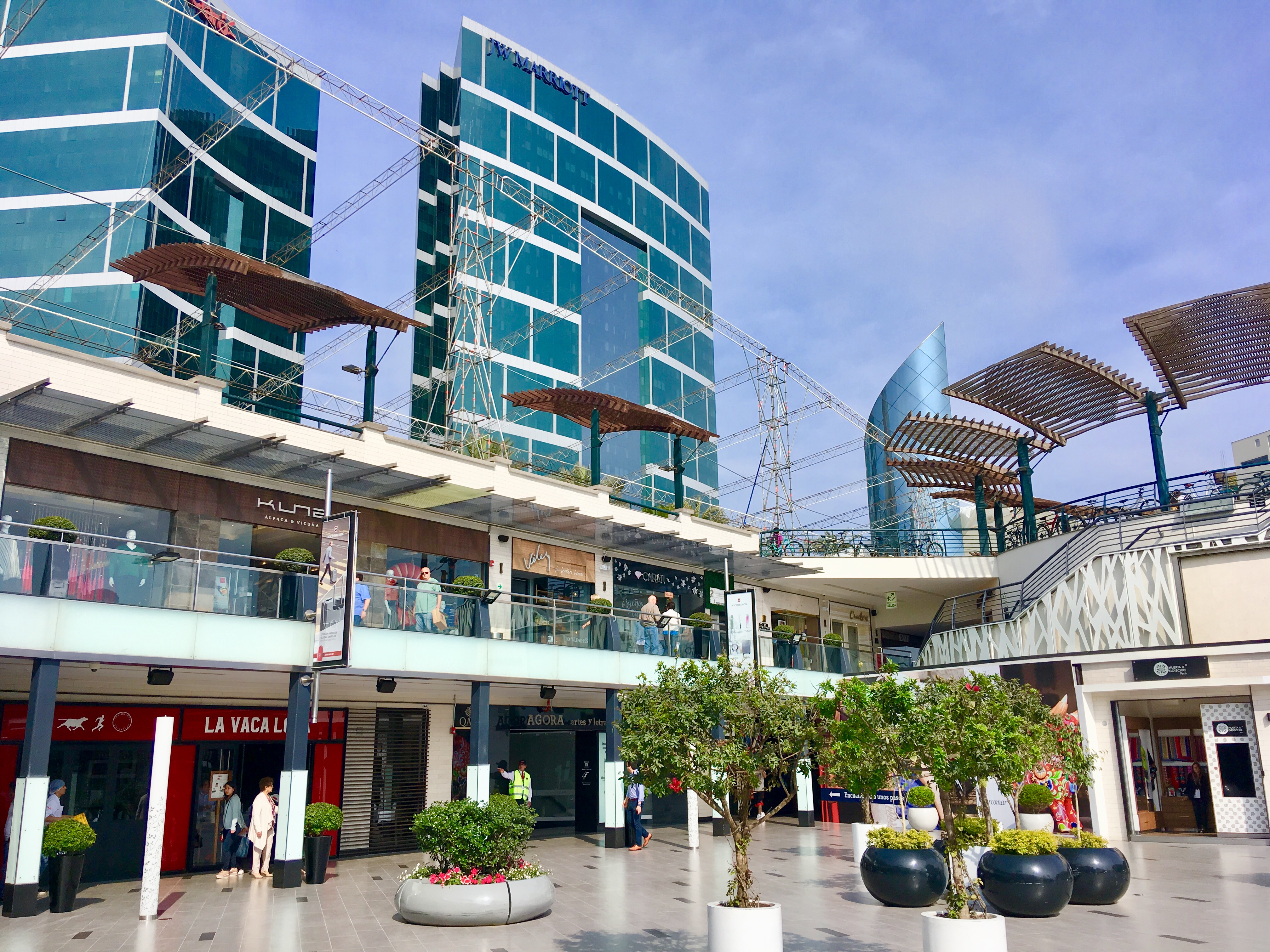 Lima is a city built on a dessert which is why it has little annual rain. It is one of the driest capital cities in the world. As you can see here from Callao, South America’s largest and busiest port just at the northern tip of Lima. 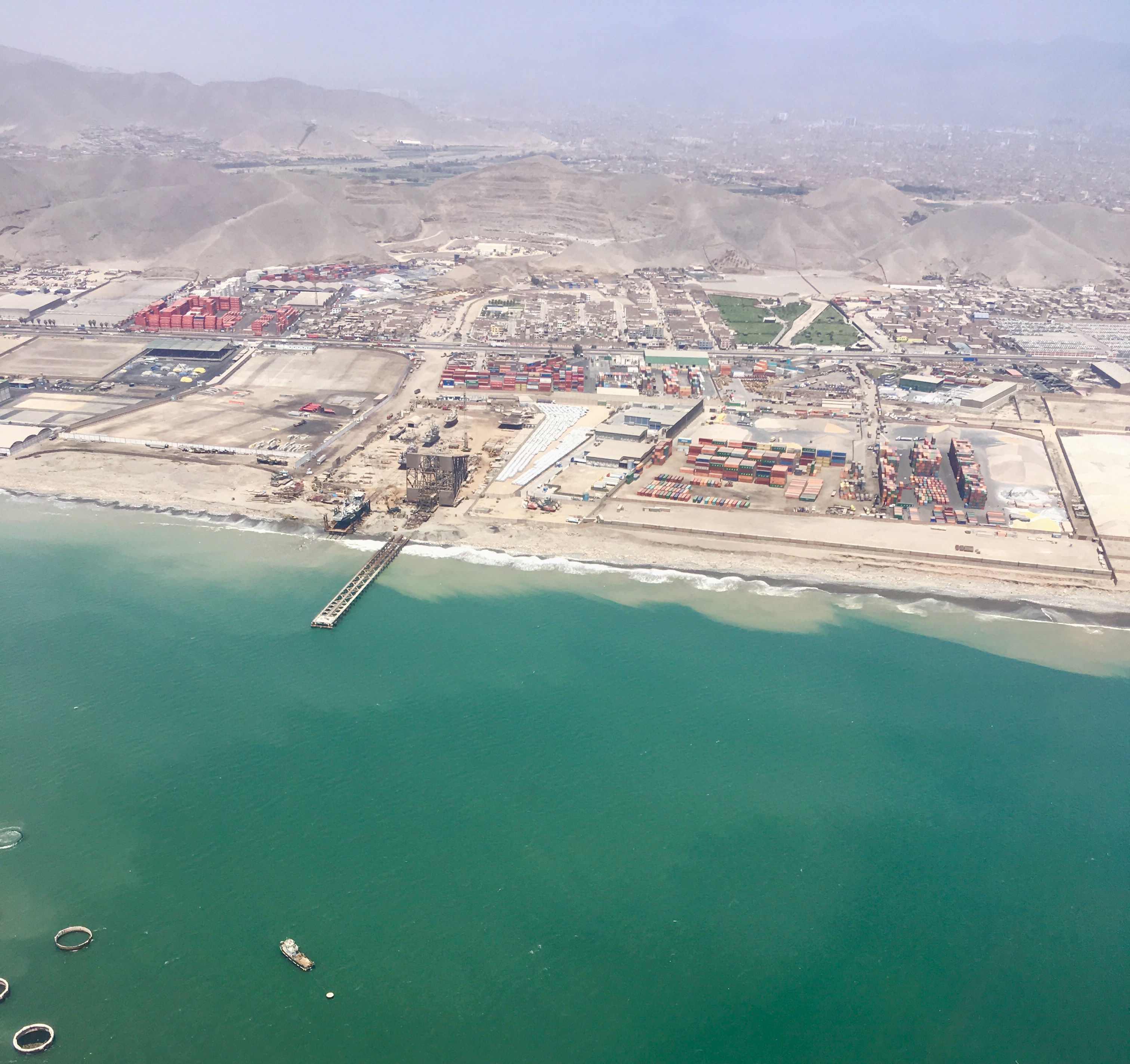 All the parklands and squares in the residential districts are very green but are watered by hand almost daily. The wealthier districts demonstrate their wealth by being able to afford to use the non-potable “drinking” water to saturate the mini parks in their boroughs. Many of which were created by the local residents rather than the Boroughs themselves who now maintain them. In this park outside where Olga lives her father replanted palm trees that were growing too big for their own garden. 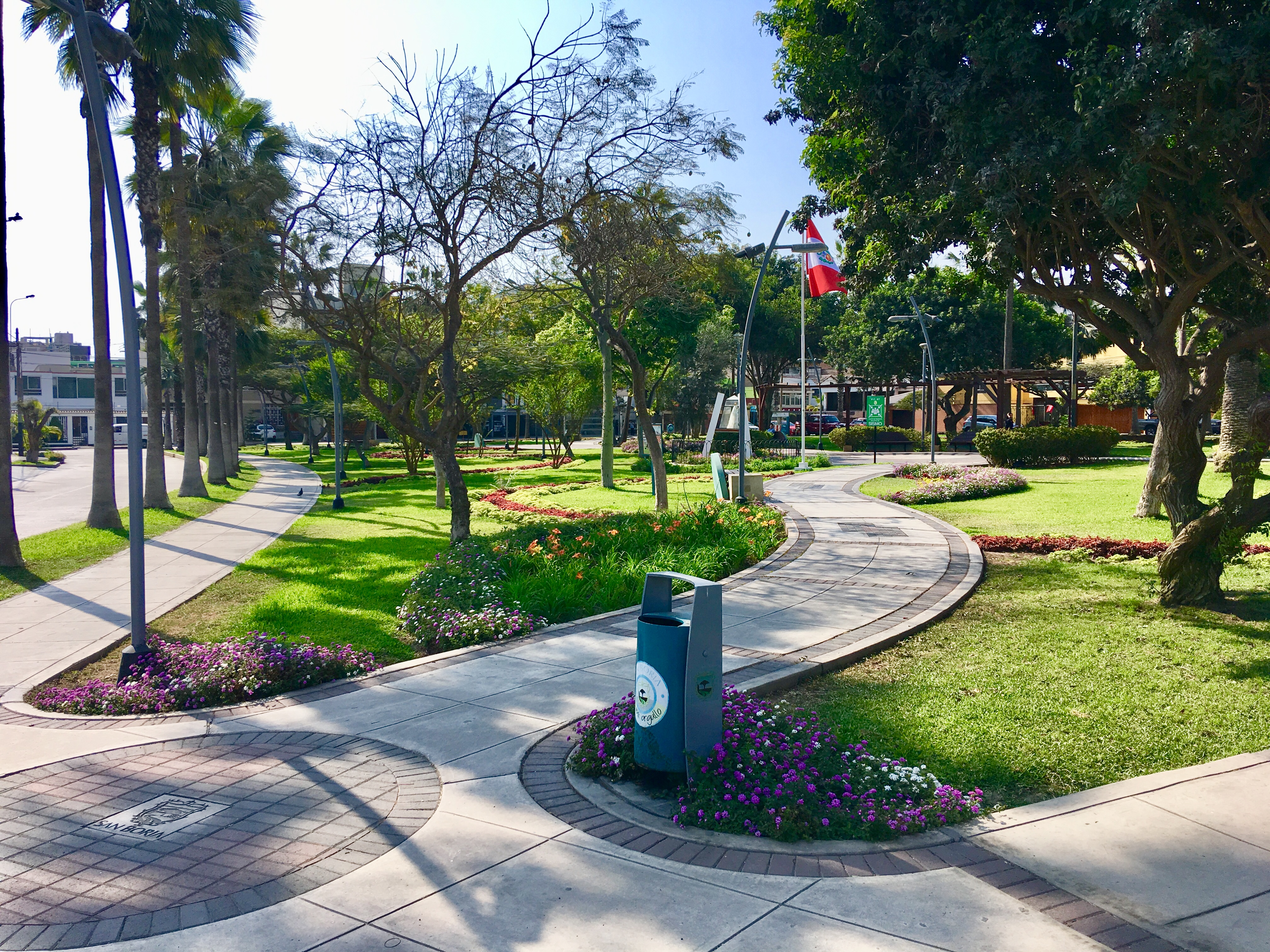 Poorer areas are dusty, dry and bleakly barren but this is no different to other major cities. London went through a building revolution that began in the economic boom of the 80s and is now suffering with theausterity of banking arrogance. So welcome to Perú… 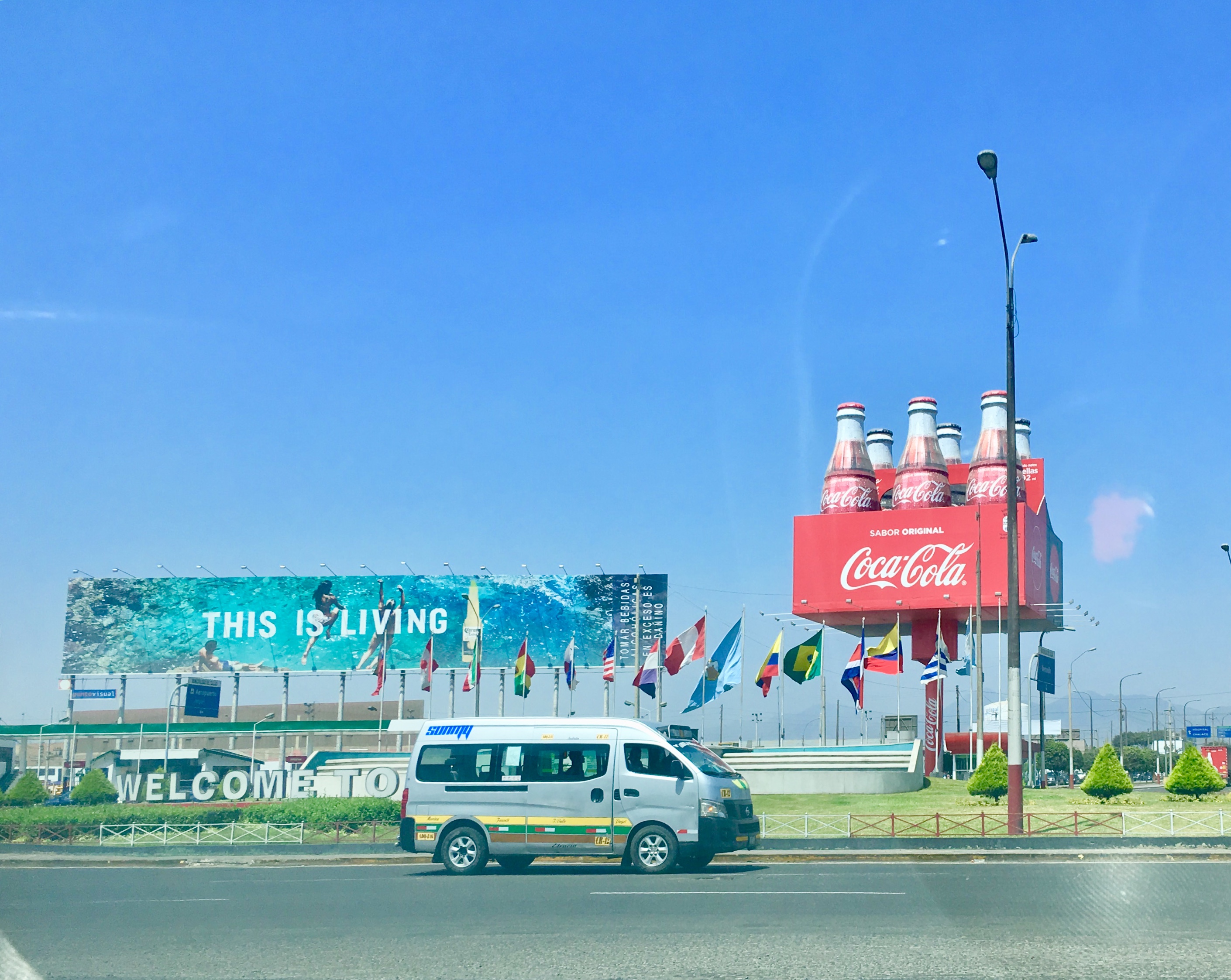 It seems to me that right now Perú has much to look forward to. They won their place in the World Cup Football next year in Russia. First time in 36 years. The match was in Lima and the entire city went crazy. The level of overwhelming joy was extreme with everyone driving around honking their horns, people screaming and crying from their balconies and drunken revellers roaming the streets all around as fire works exploded in the city sky. Due to the win the government declared the following day a national holiday. Now I’m not much of a football fan, actually I don’t follow football at all, ever. I do however see here that football and the immense confidence in ending that long drought will bring Perú an important boost to their confidence in the world and lift their economy. Perú is already undergoing huge developments in building, tourism, gastronomy, art and culture. This is merely more wind in those sails to sweep them forward. 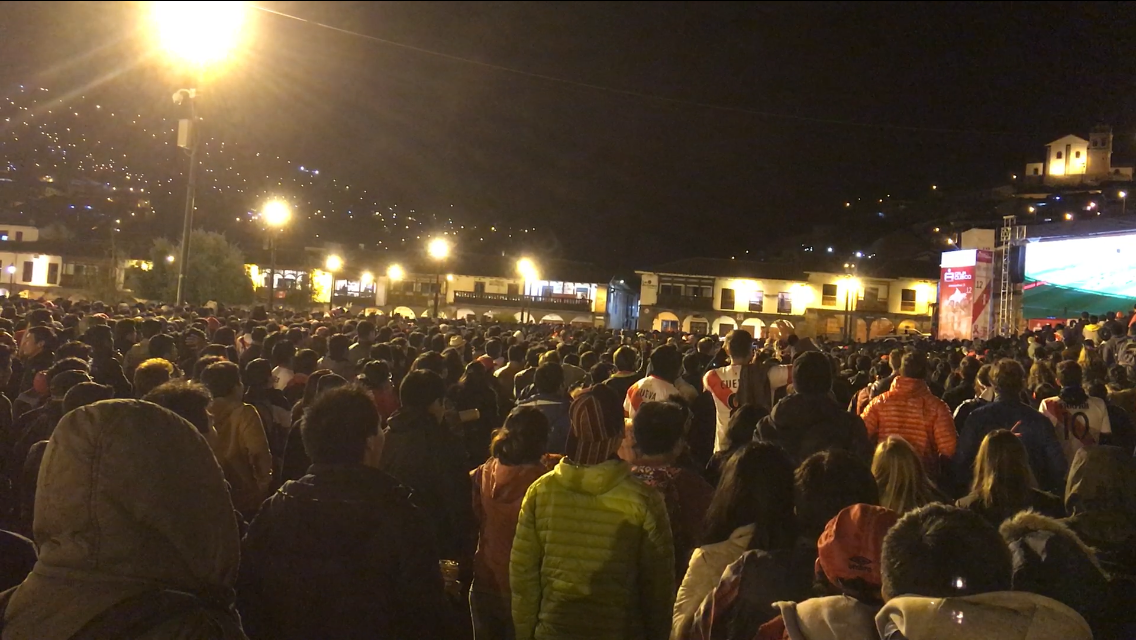 I watched the first match on the big screen in Cusco. All over Cusco they are immensely proud of their rainbow flag. The flag that can cause some friction among Peruvians was not present in the square for the match. The red and white colours of the national flag were everywhere. Everyone wore the squad shirt or had red and white ribbons or painted their faces red and white. Everyone was excited and were one nation under one flag. Back in the 1980s Andean terrorists  were bombing Lima to demand better representation. When they held many government officials hostage the police response was to wipe out the terrorists. Many people also went missing during this time too but for me three decades on though this ‘beautiful game’ that I loath  I see the power of healing.

Tourism is certainly changing the face of Perú but Lima needs to achieve much to gain more tourism. Many tourists fly into Lima and transfer directly to other destinations. This is not that the city doesn’t have so very much to offer it is packed with things to do and see. Partly it is the poor public transport network but they are currently extending two train lines. Tourists have to rely on taxis and the crazy driving here that puts many off exploring far from their hotels. But perhaps the bigger problem is that the most famous places of interest for tourists are in other parts of the country. Visitors I speak to say they know little of the wealth of amazing places to visit as Machu Picchu and the Sacred Valley near Cusco steal all the limelight. Some decent PR on the many many fantastic places from the Ministry of Culture wouldn’t go amiss (give me a call, I’d be more than willing to act as a consultant for you, I’m brimming with ideas to help your beautiful country). 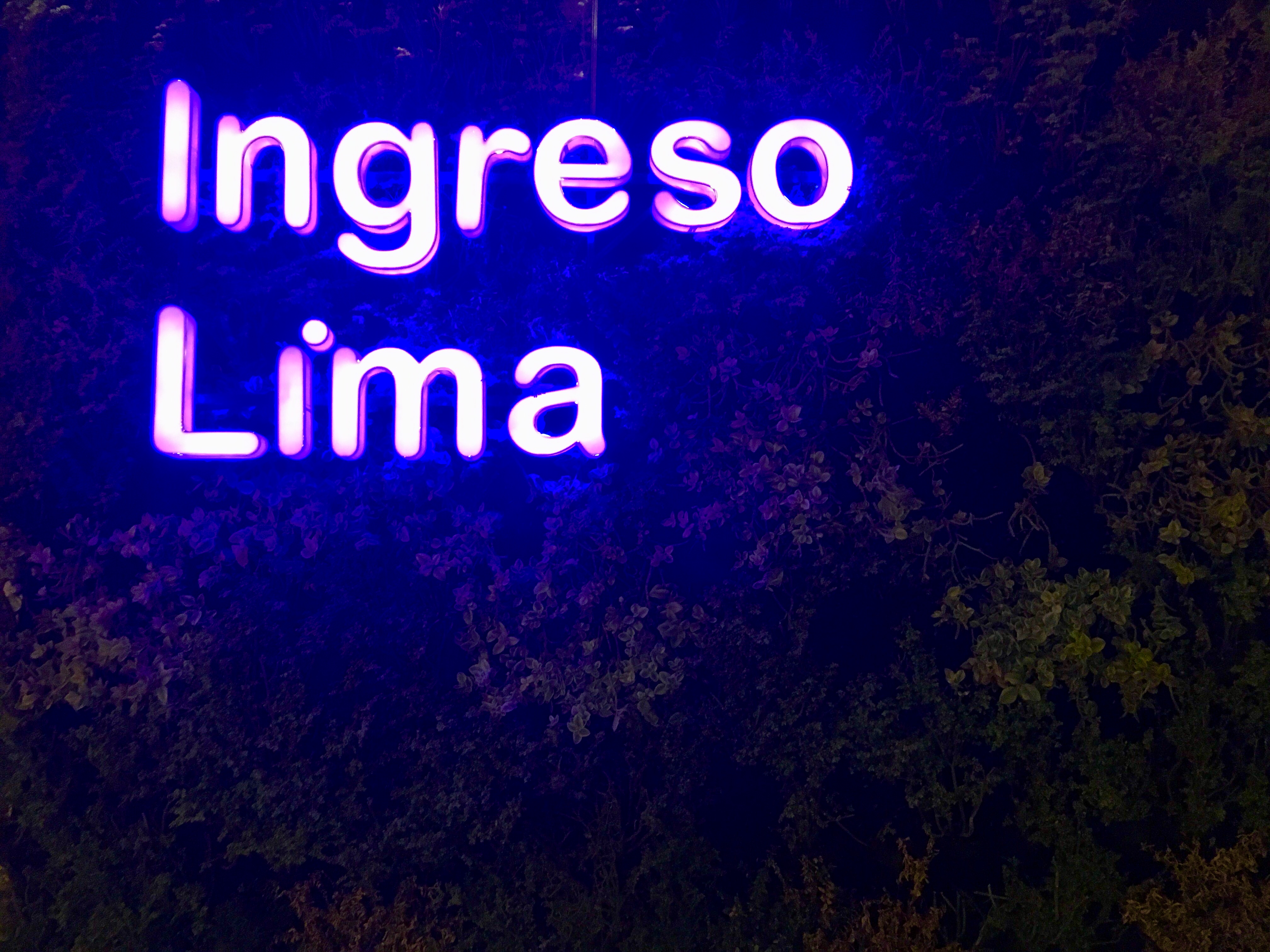 Cusco is now the most expensive place to buy a property in Perú. This is because of the tourism in the town. Once the crown in the Inca Empire (other pre-Columbian cultures are available) now the jewel of the tourism industry. Here the wealthy and the backpackers gather to visit all the magnificent ruins. I could have spent five weeks here and still not seen all that Cusco has to offer. You need time to acclimatise to the altitude so doing too much in one go leaves you rather worn out and tired. But just means there’s an excuse to return and see more. I did however have plenty of time to try the many amazing restaurants. The food here is often a fusion of global cuisines and Peruvian touches. Everything is beautifully presented and the big trend currently is edible flowers with everything. 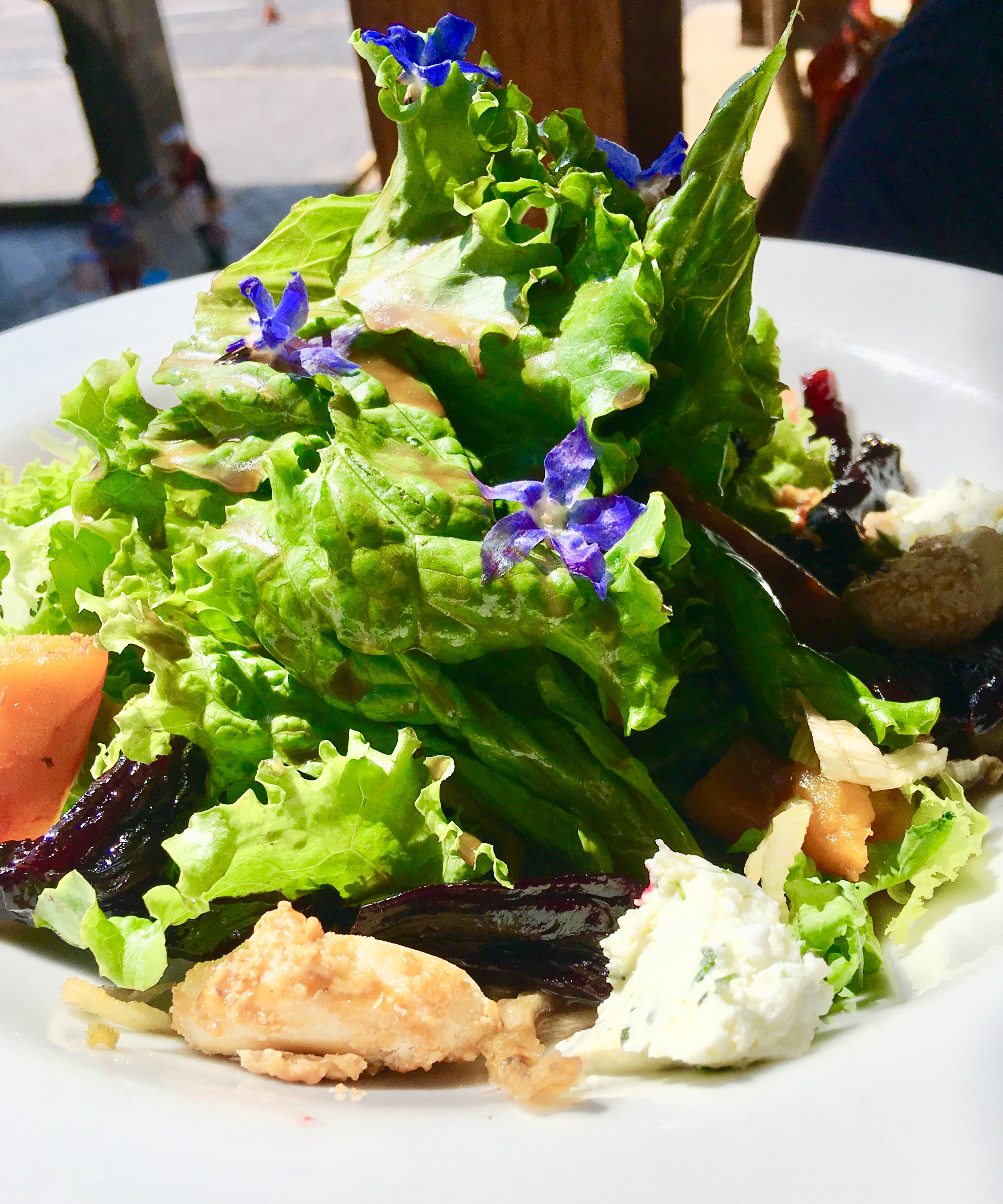 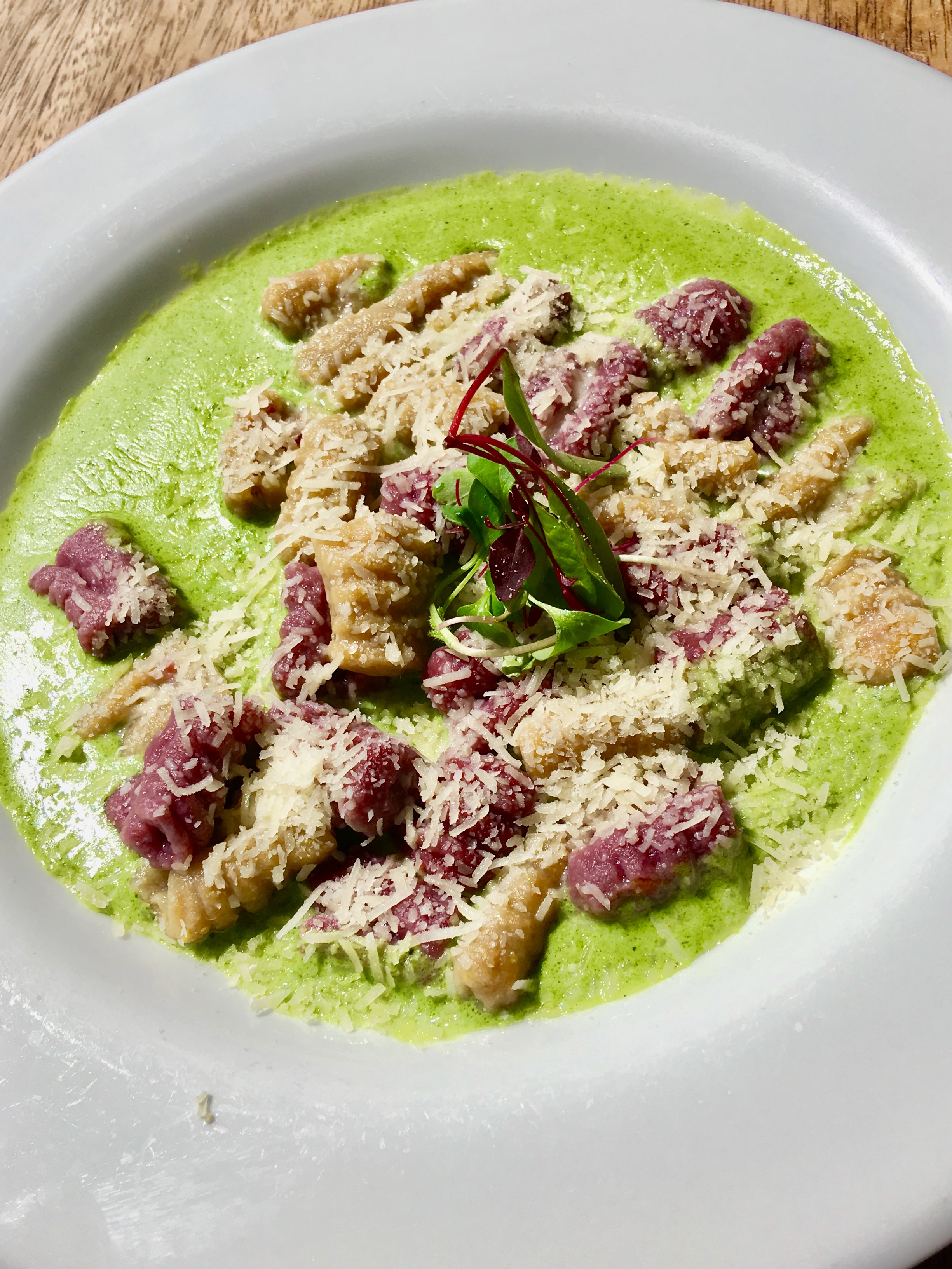 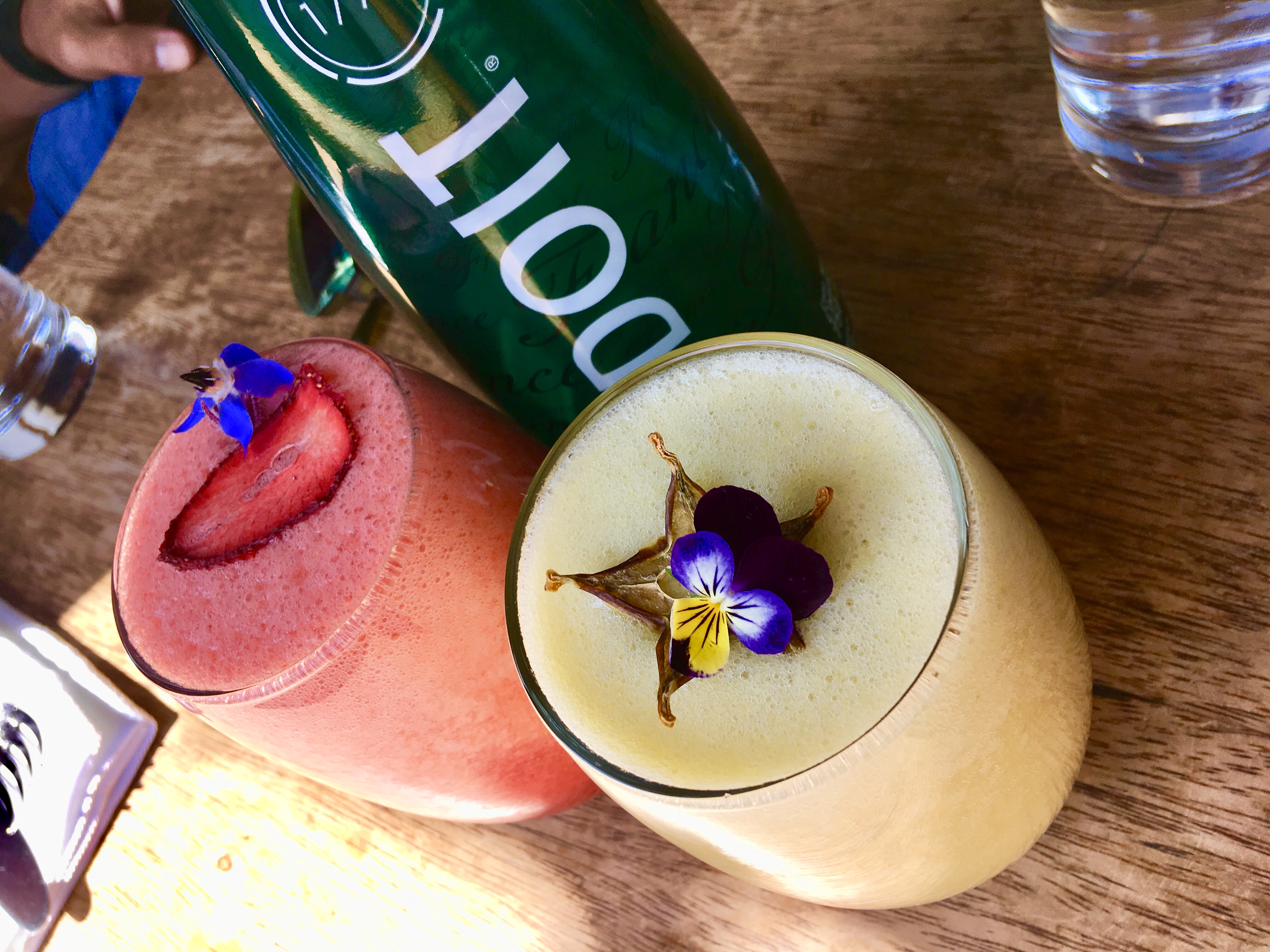 Many fruits here obviously grow locally so the taste of them in desserts or drinks is so much fresher. But then so too is the coffee here. Not the Starbucks coffee – though this is the go-to place for many tourists seeking a WiFi connection, as they use UHT milk and seem to forget to put any actual coffee in the coffee. I’m talking about fantastic places such as Museo del Caffe just off the main square in Cusco. 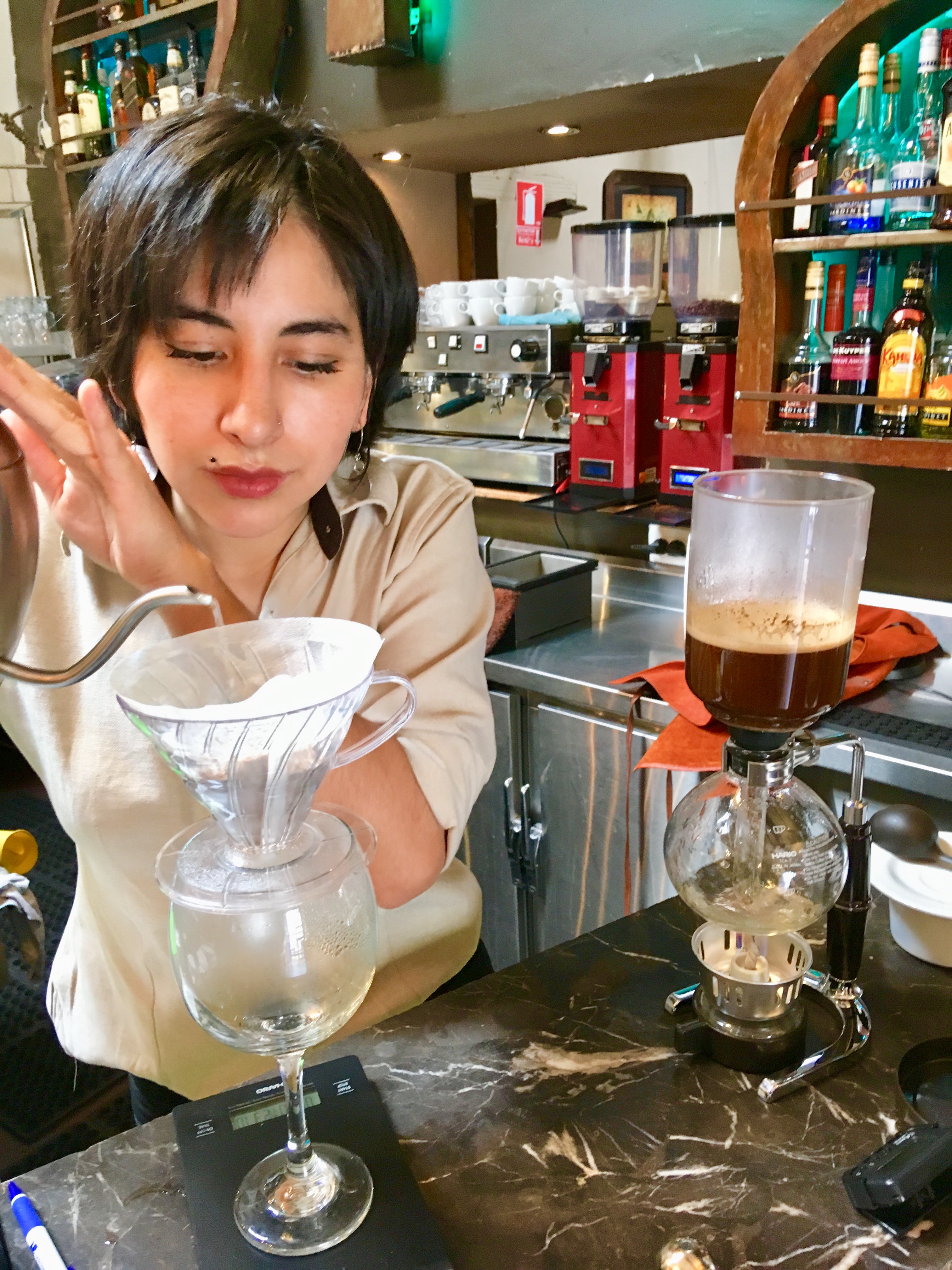 Here they grow their own coffee at high altitudes, grade it and roast it and then offer to brew it in as many styles as imaginable. Here we tried Japanese syphon method and a drip filter. Kayla, the undisputed Queen of coffee educates her patrons as she brews the finest coffees in town. 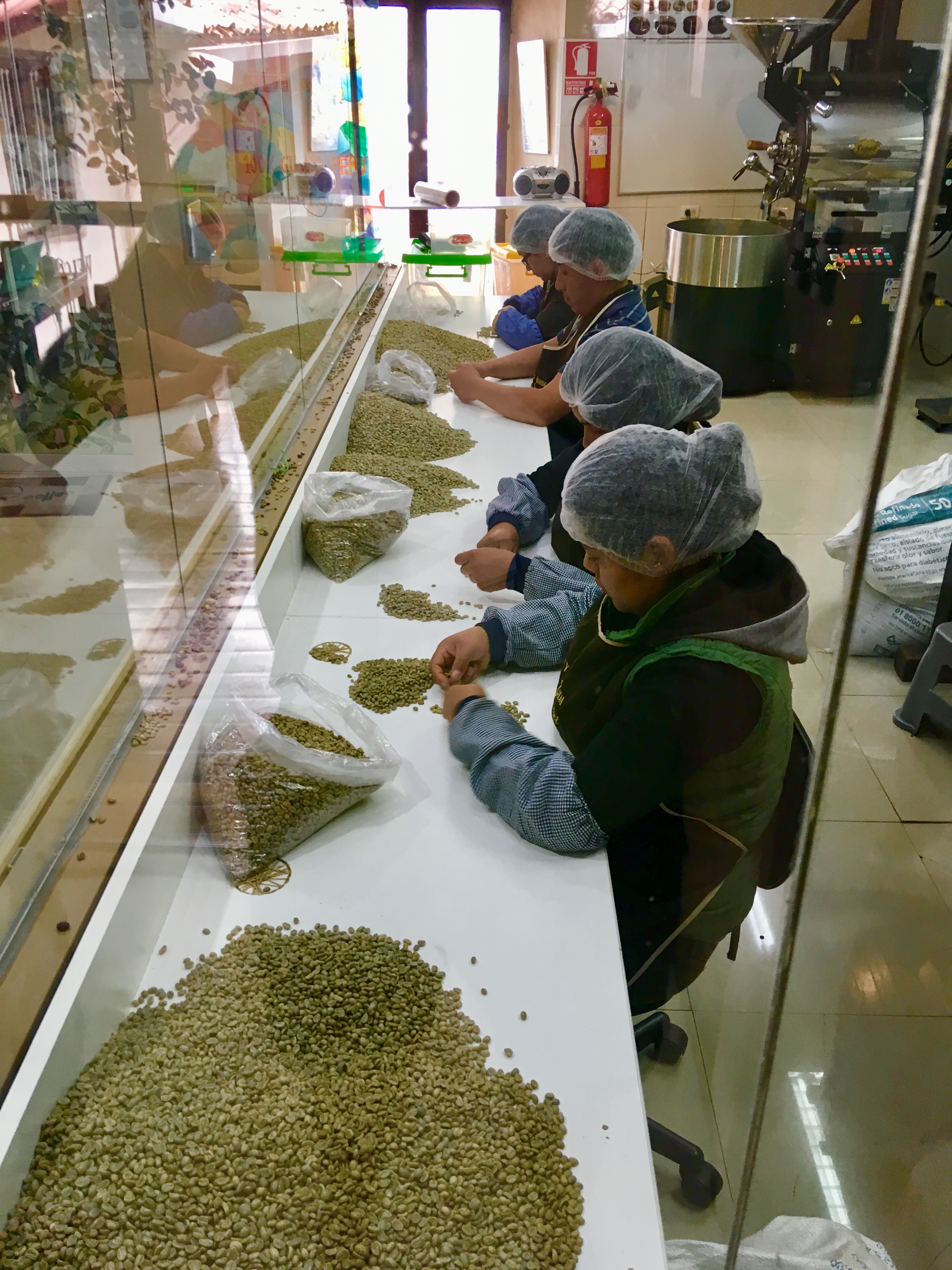 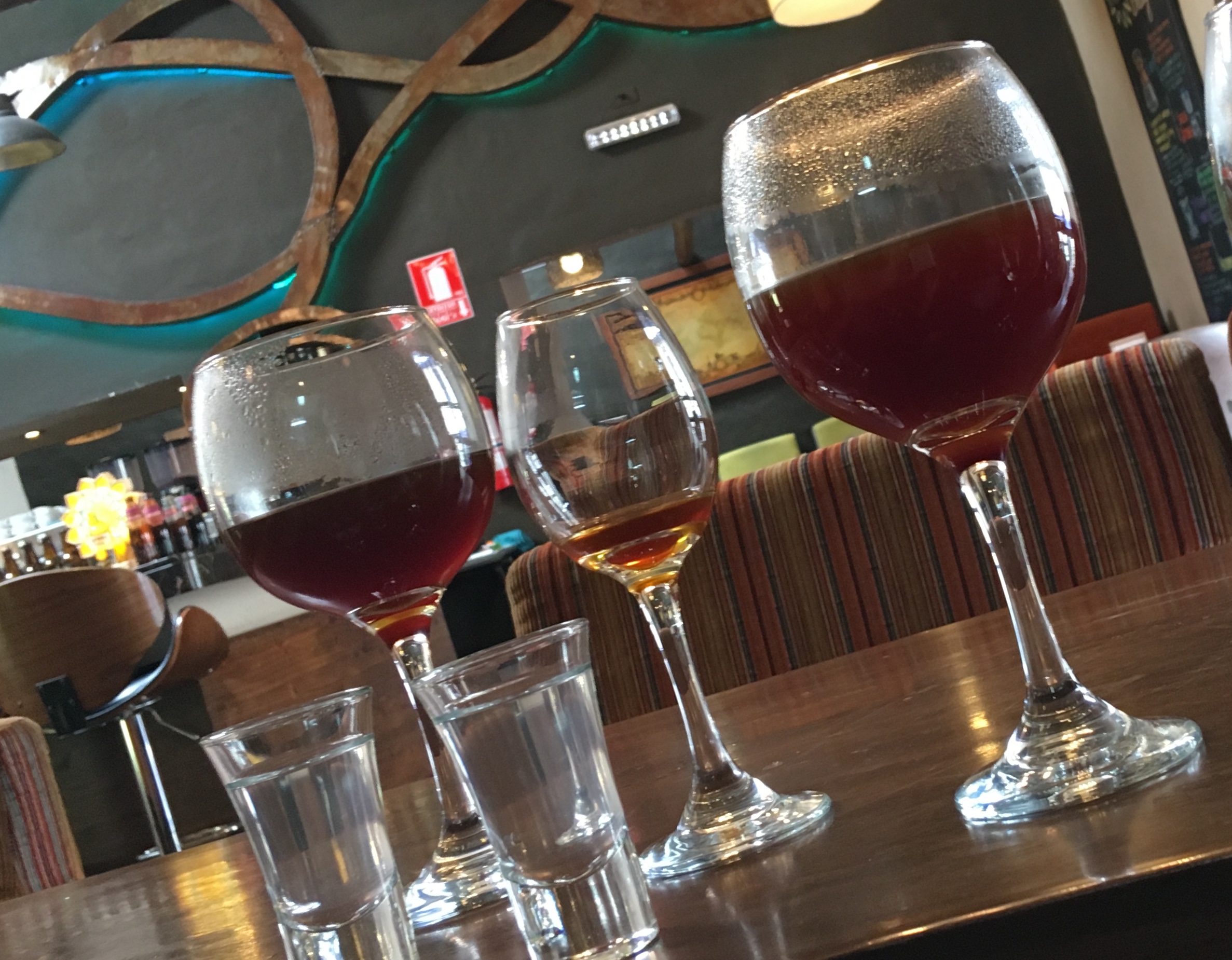 But it isn’t just about learning to appreciate the myriad of tastes each brewing method brings but also about indulging in exquisite dining there too. 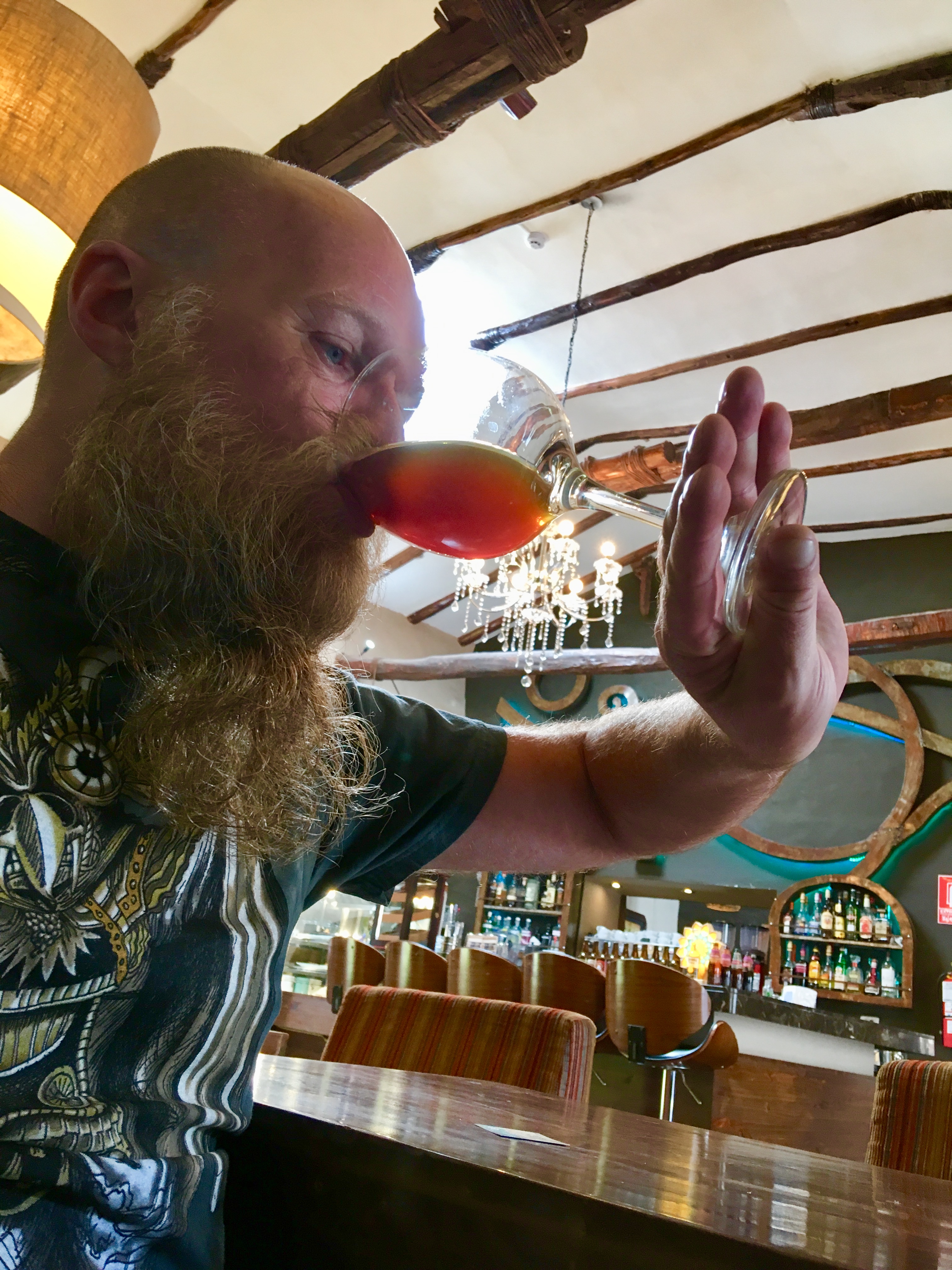 Plus there is a museum attached too where you can learn about the history of coffee and its relatively modern cultivation in Peru. Like chocolate cultivation here, the mountainous regions here are producing some of the finest coffee beans too. This place with all the friendly staff was packed with locals and tourists. They really do fantastic food. Checkout the cute falafel starters in mini flatbreads. 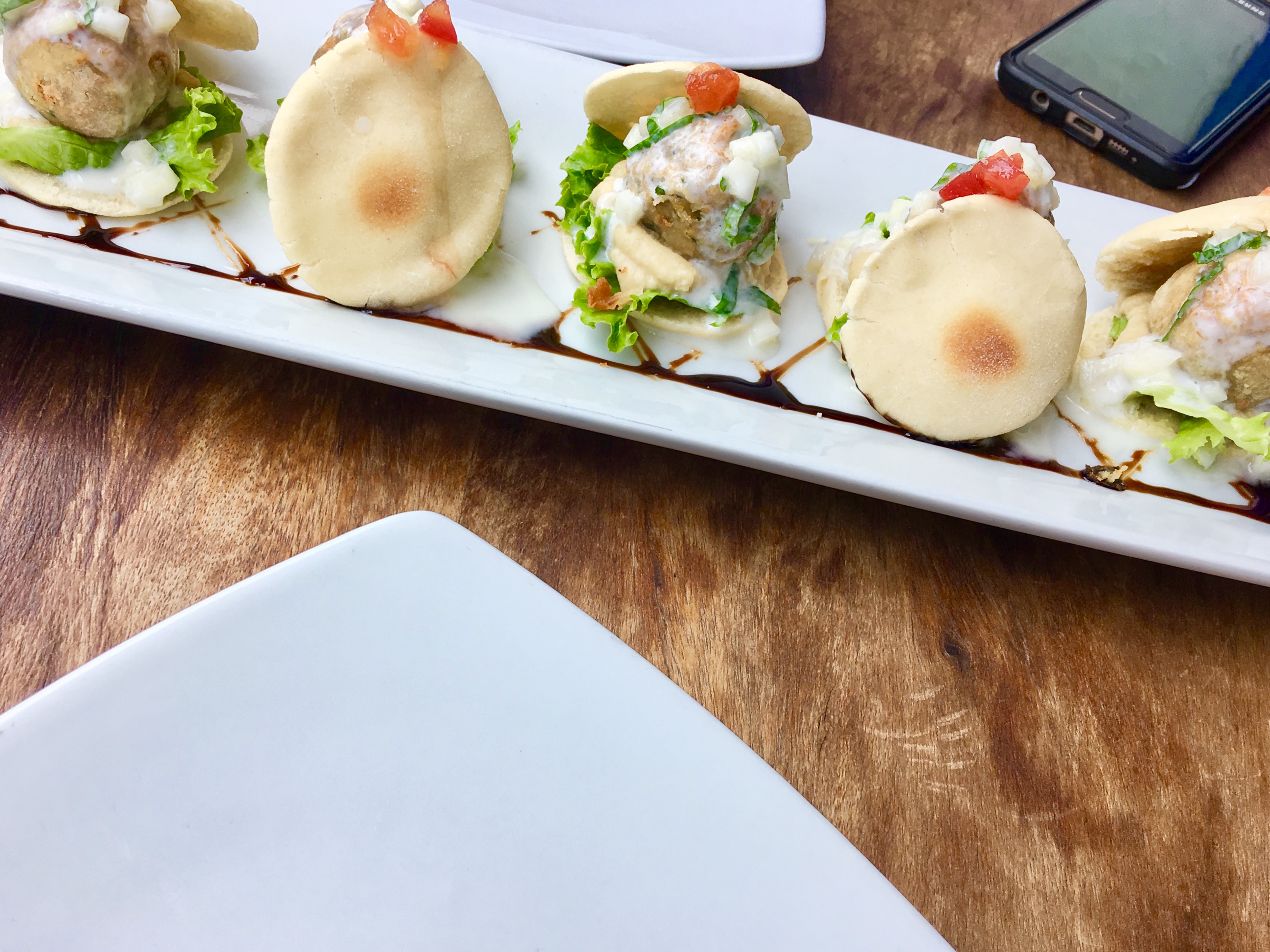 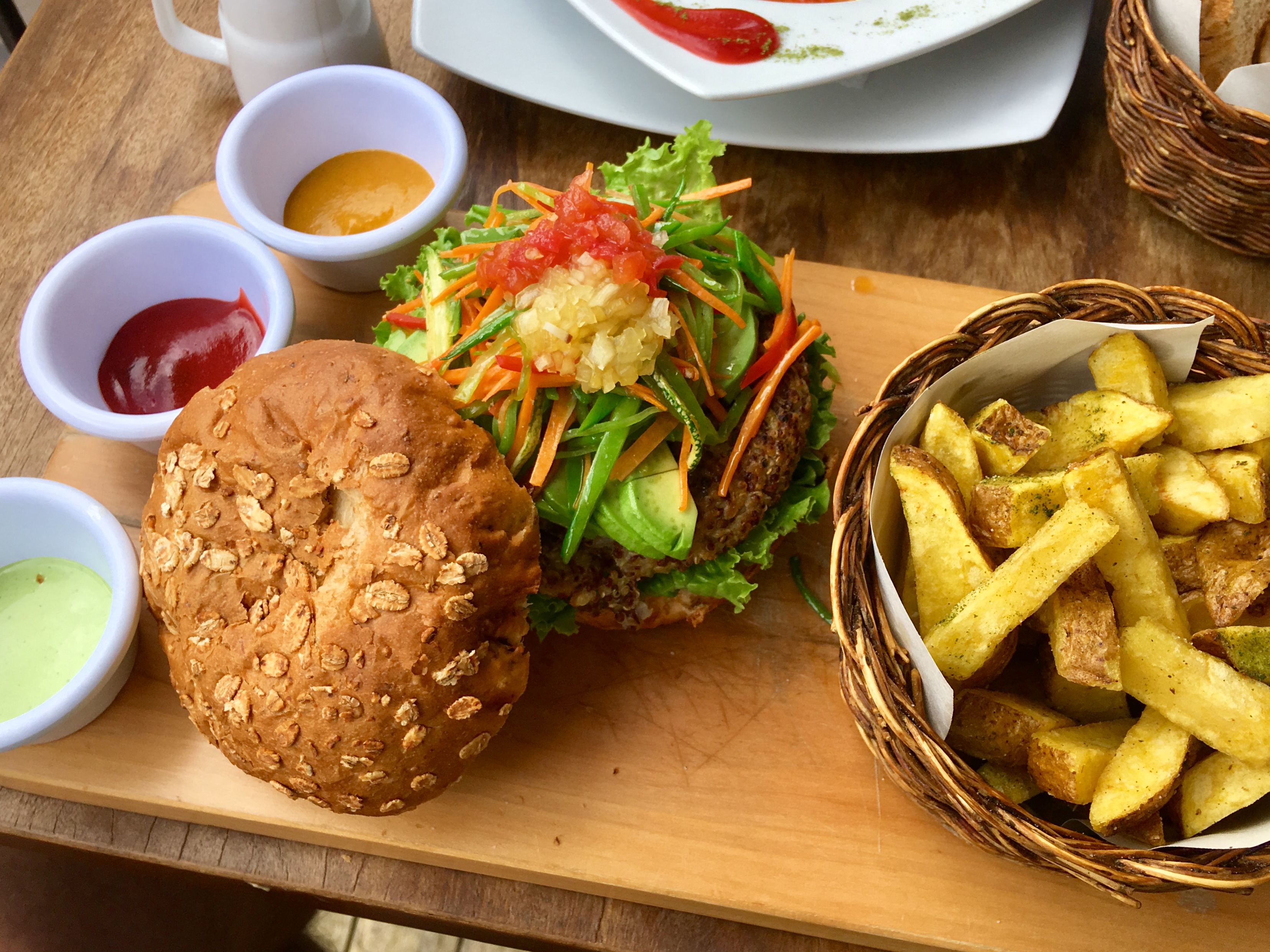 The most wonder quinoa burger with the freshest avocados and carrots and green beans shredded so finely it almost seemed impossible. All served alongside yellow Andean chips which give our UK ones a run for their money. 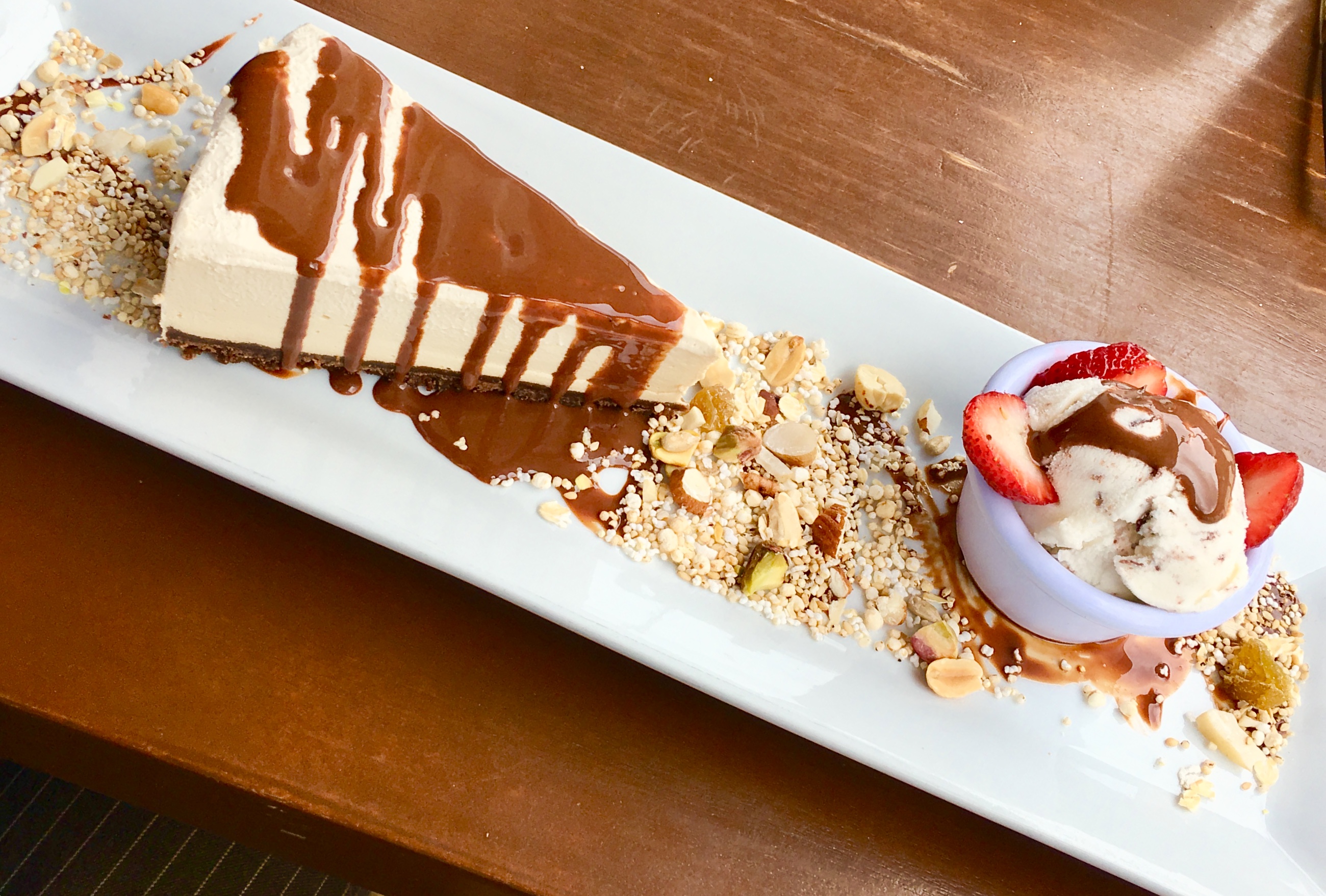 Mokachino cheese cake and ice-cream with puffed local grains. Chased down with bear cortado coffee! Made with love, not Peruvian flirting from the waiters. I wished hehe. So many handsome guys here. 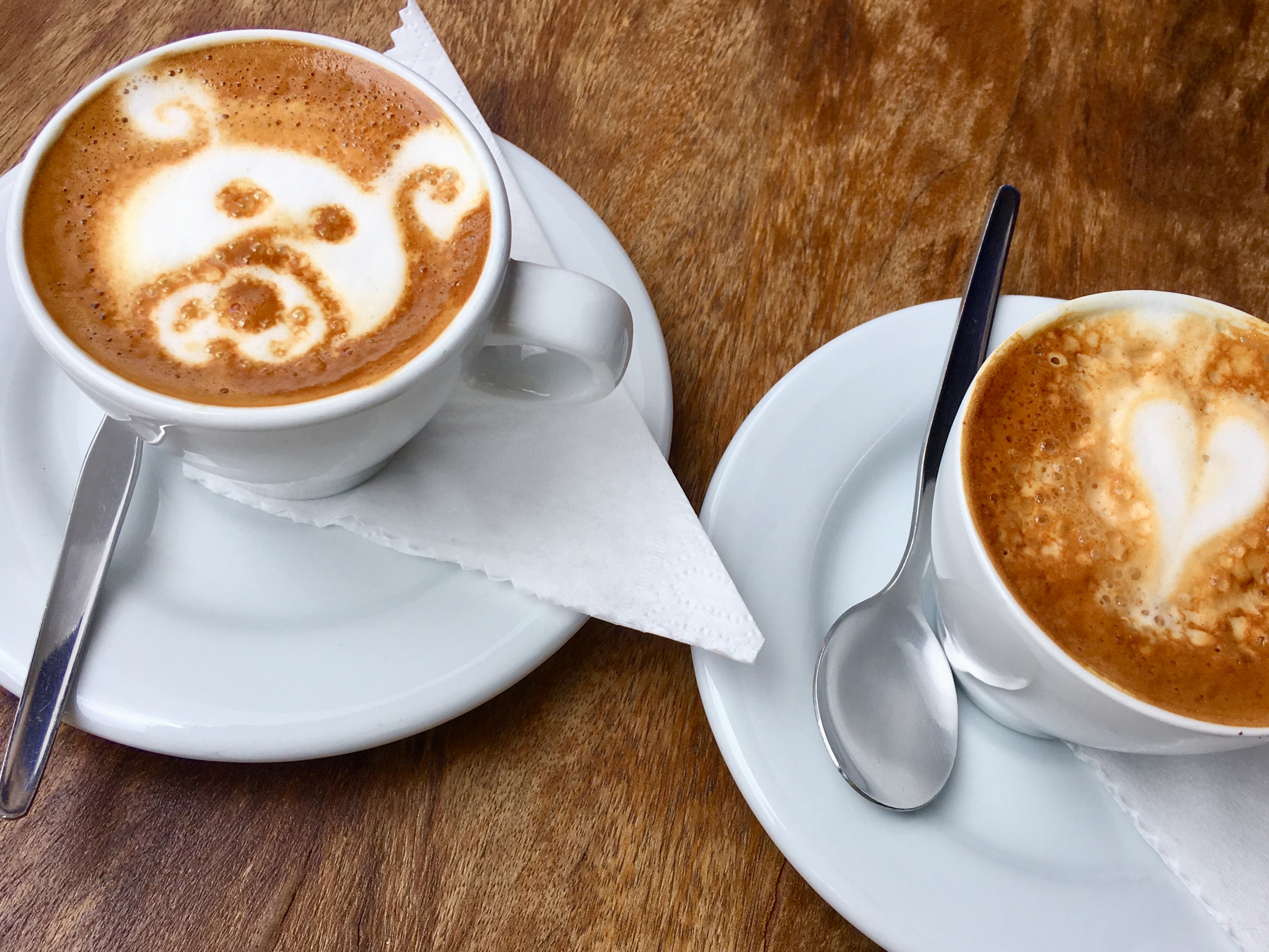 I’m not saying Lima doesn’t also have some amazing dining experiences it does. It also has some amazing locations too in which to eat. 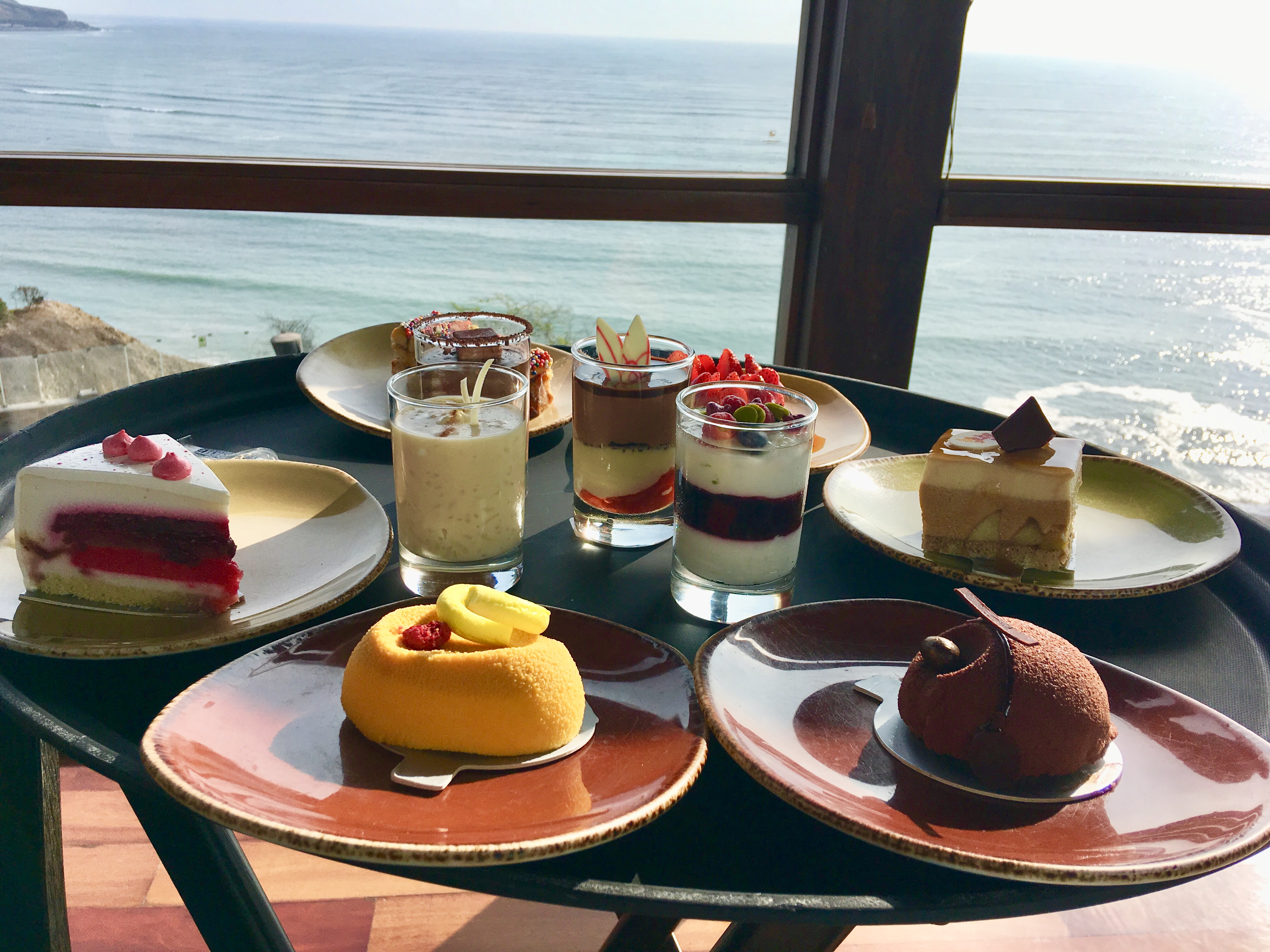 Dessert trolly anyone? Yes please to all of them. The Larcomar shopping centre hugs the cliffs and offers unparalleled views across the pacific ocean. Shopping on three floors and views beyond compare. Also a lower level gym with all equipment looking out to sea. I read a while back that exercising while facing the sea made people push harder and achieve more. 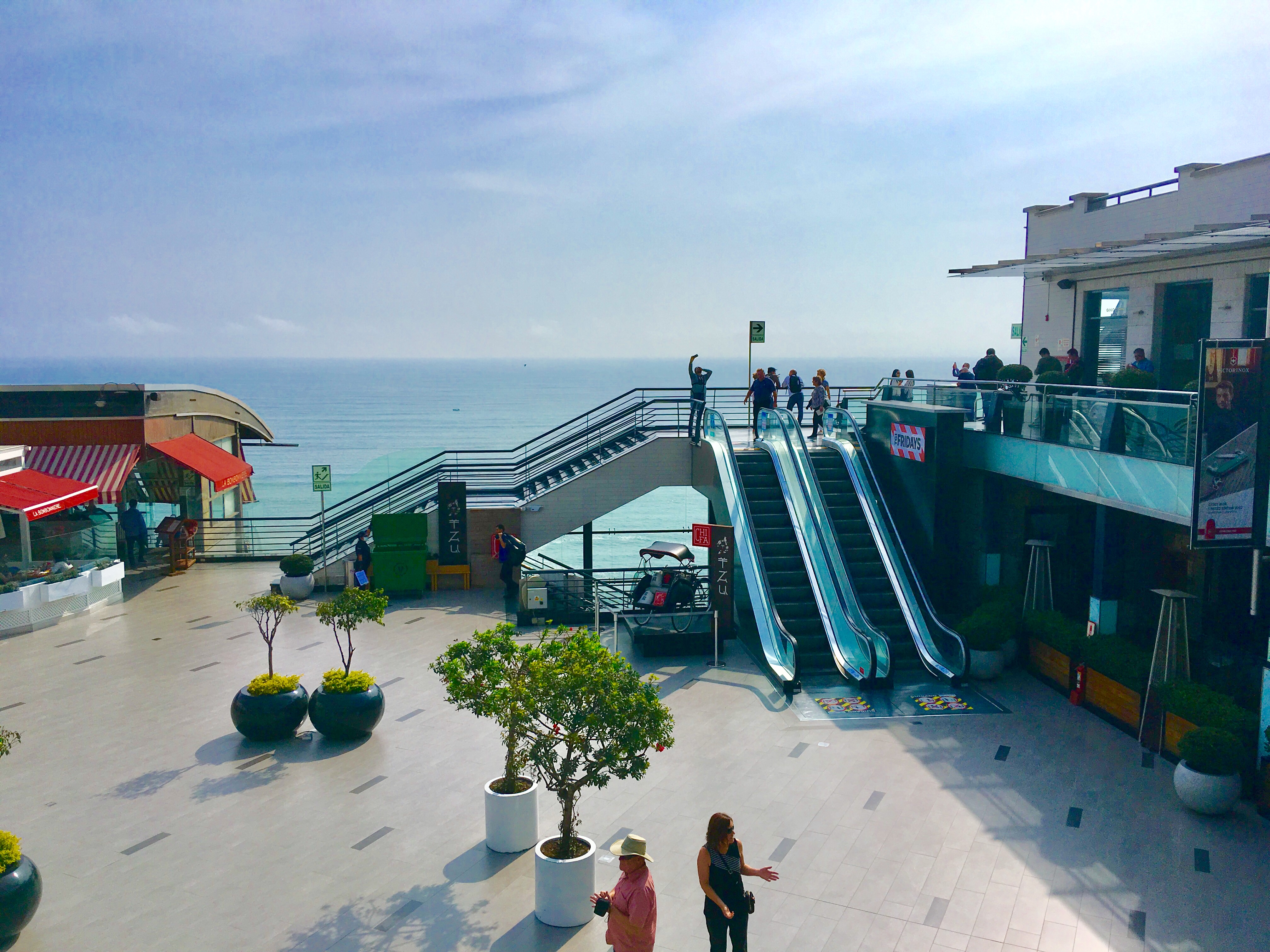 Many of the big global chains are here in the shopping centre built for the wealthy and the tourists but the location is everything. It is also a fine example of the modern side of Peru. In many areas locals who have lived in houses all their lives are selling to developers who will replace two story dwellings with tall towers. This is creating new wealth for many in Lima. And this in turn feeds back into the economy. 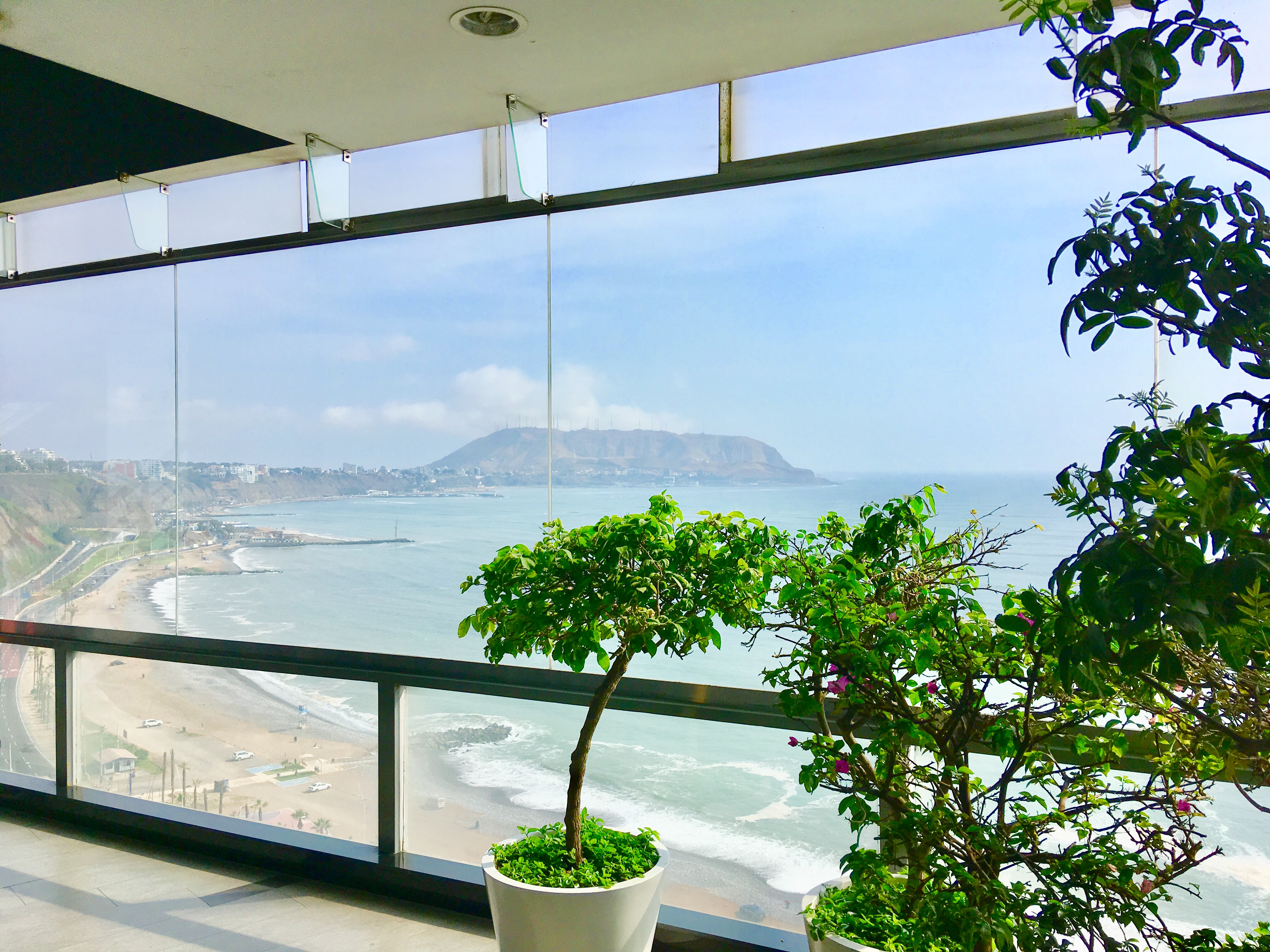 Culture, arts and crafts are also a massive contributor to the economy here in Perú from the weaving of cloth and knitting and crocheting in the Andes to the many museums crammed with treasures and the modern galleries showcasing the latest artists and their works. In Cusco I was taken to see Museo Maximo Laura where the tradition of male carpet making is being taken to a whole new level of design. 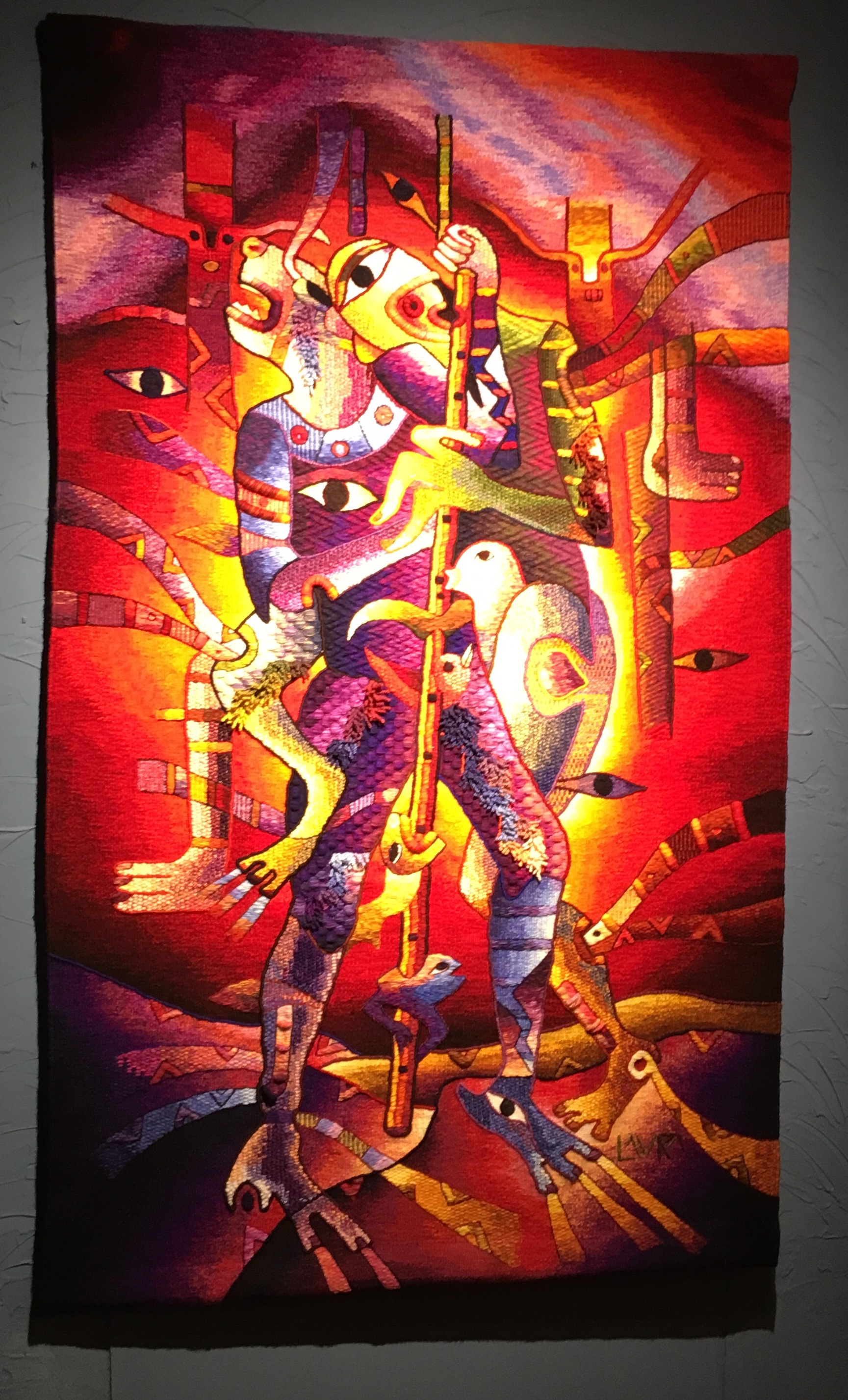 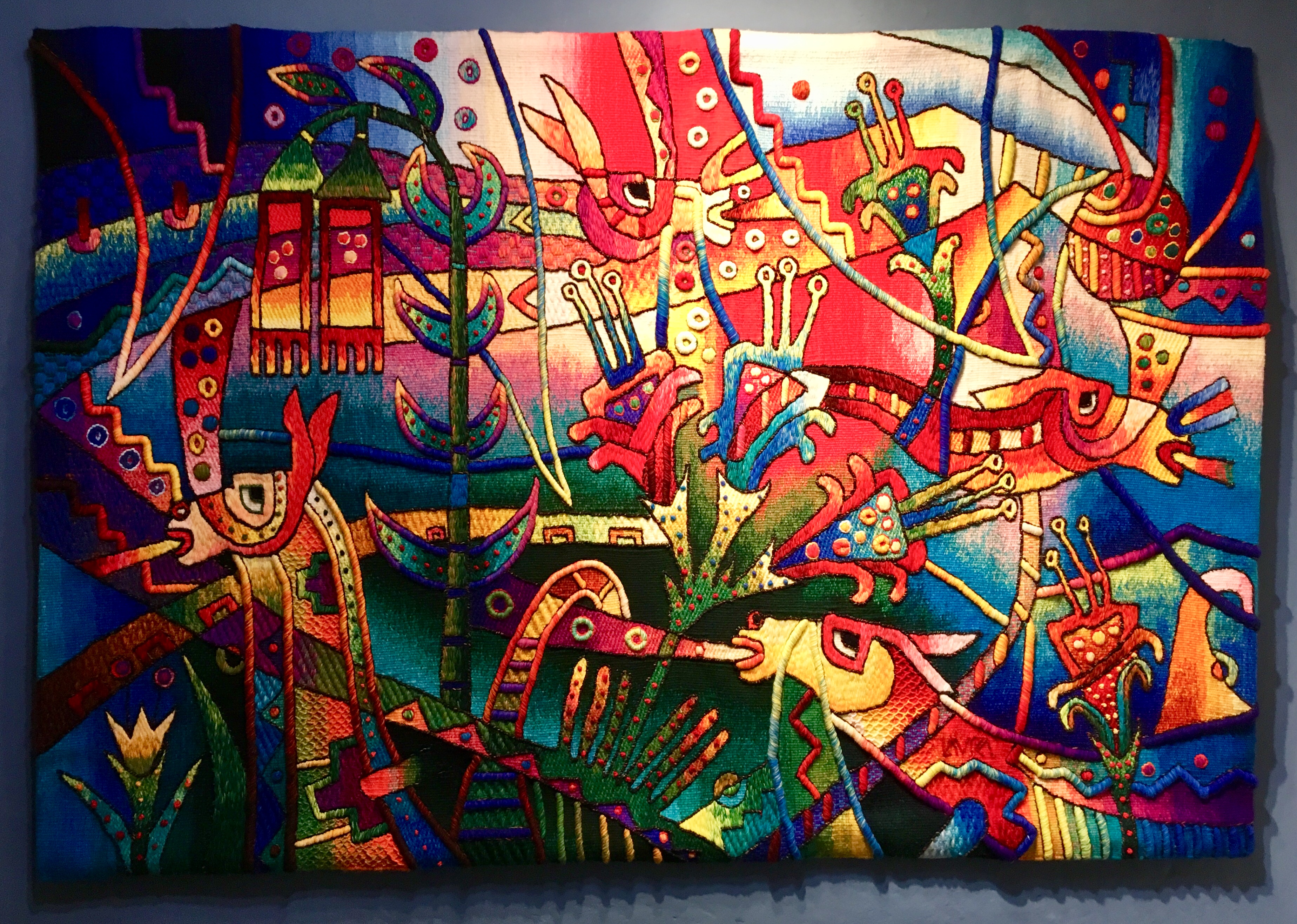 I was so in awe of these rugs. The designs, the colours and the various techniques. Upstairs there was a guy who was weaving a new design and I suddenly wanted to stay in Cusco to become a rug maker. 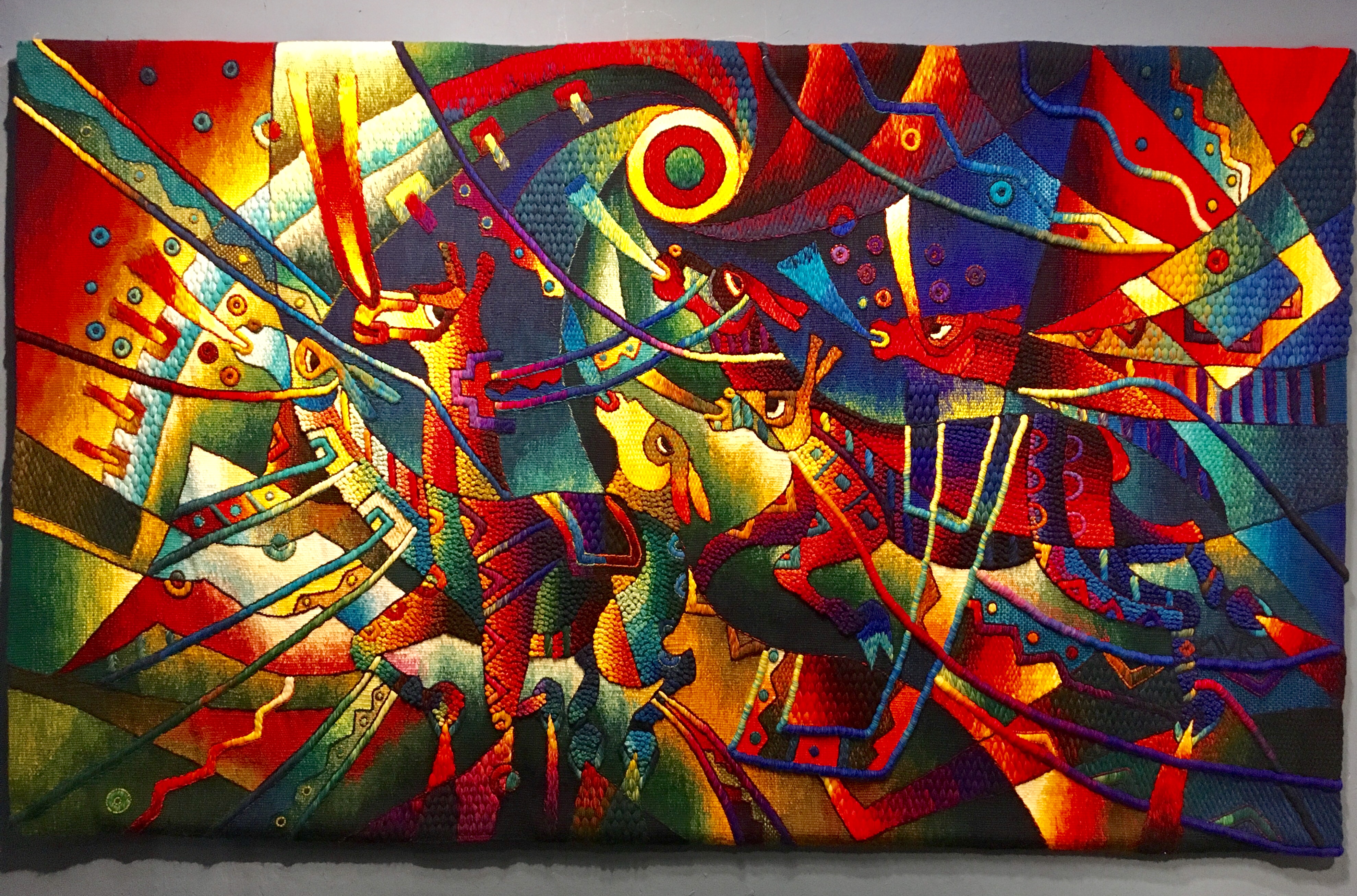 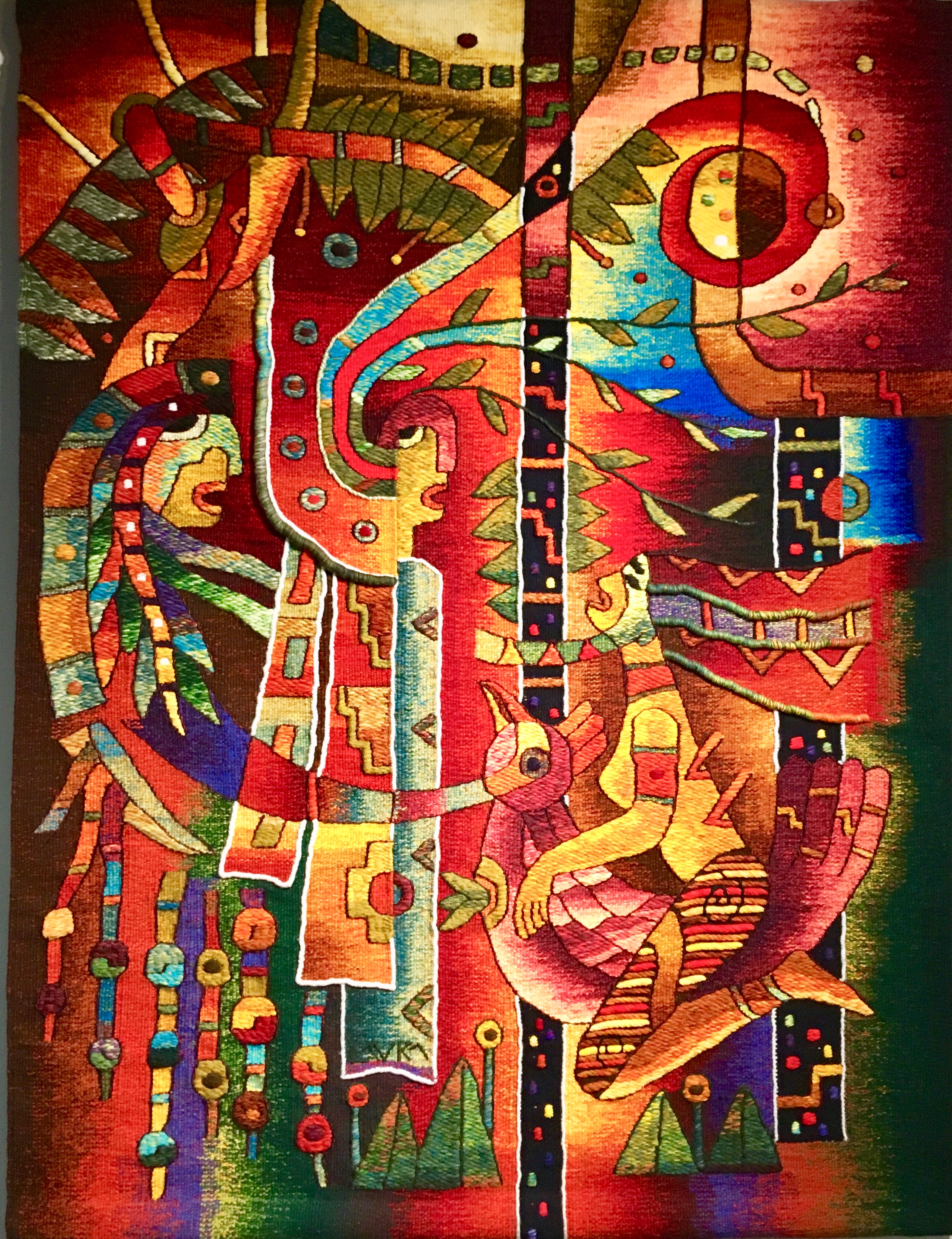 Not knowing a great deal about Peruvian art I am definitely a very willing pupil. And so very late on Thursday Olga and I decided to attend the 80th birthday party of Perú’s greatest living artist Gerardo Chavez. Only problem was that the dress code was masks. Obviously I couldn’t wear my rubber pig mask I travel with so we had to think of something else. Olga had been making traditional Peruvian Tamales all day. Maize or chickpeas with chillies, peanuts, onions, cheese and olives that are wrapped in maize leaves and tied with string and then boiled again to finish them off. 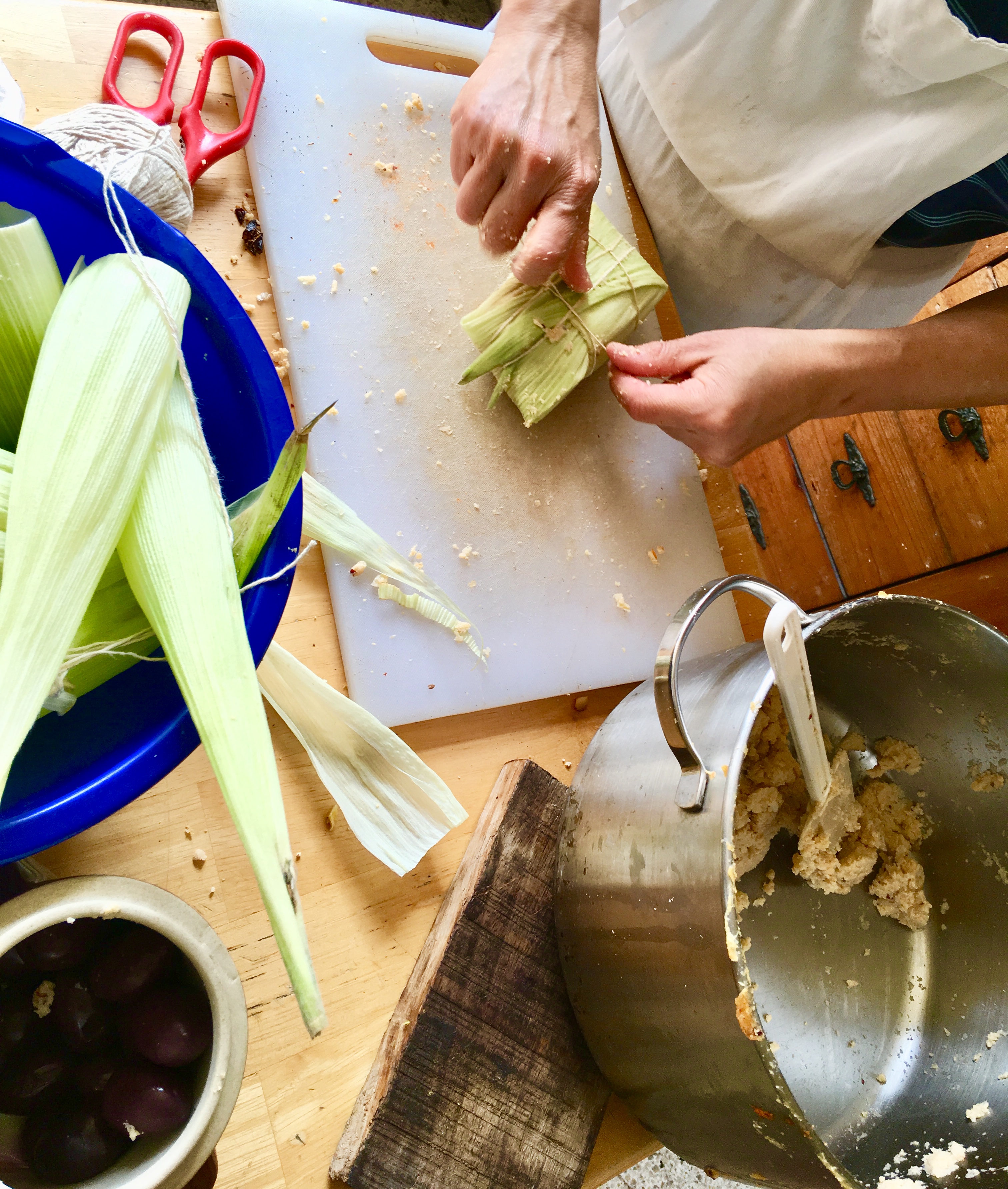 As we had maize leaves left over we decided to make use of local produce to create something to wear against the clock. We rushed around stringing chuño and sweet macaroni to make jewellery and local flowers to make eyes and breast plates. Using Inca flour sacks costumes were run up and leaves and lemon grass were stapled to wire to create our look for the party. I did have to be persuaded that wearing no trousers might be a little too much for the other guests so I compromised with a half cloth skirt and just one bare leg. Haha we had fun posing for all the cameras and I managed to accidentally knock the elderly artist twice as I couldn’t see where I was going and the mask was quite large! But he chose the theme so can’t complain. 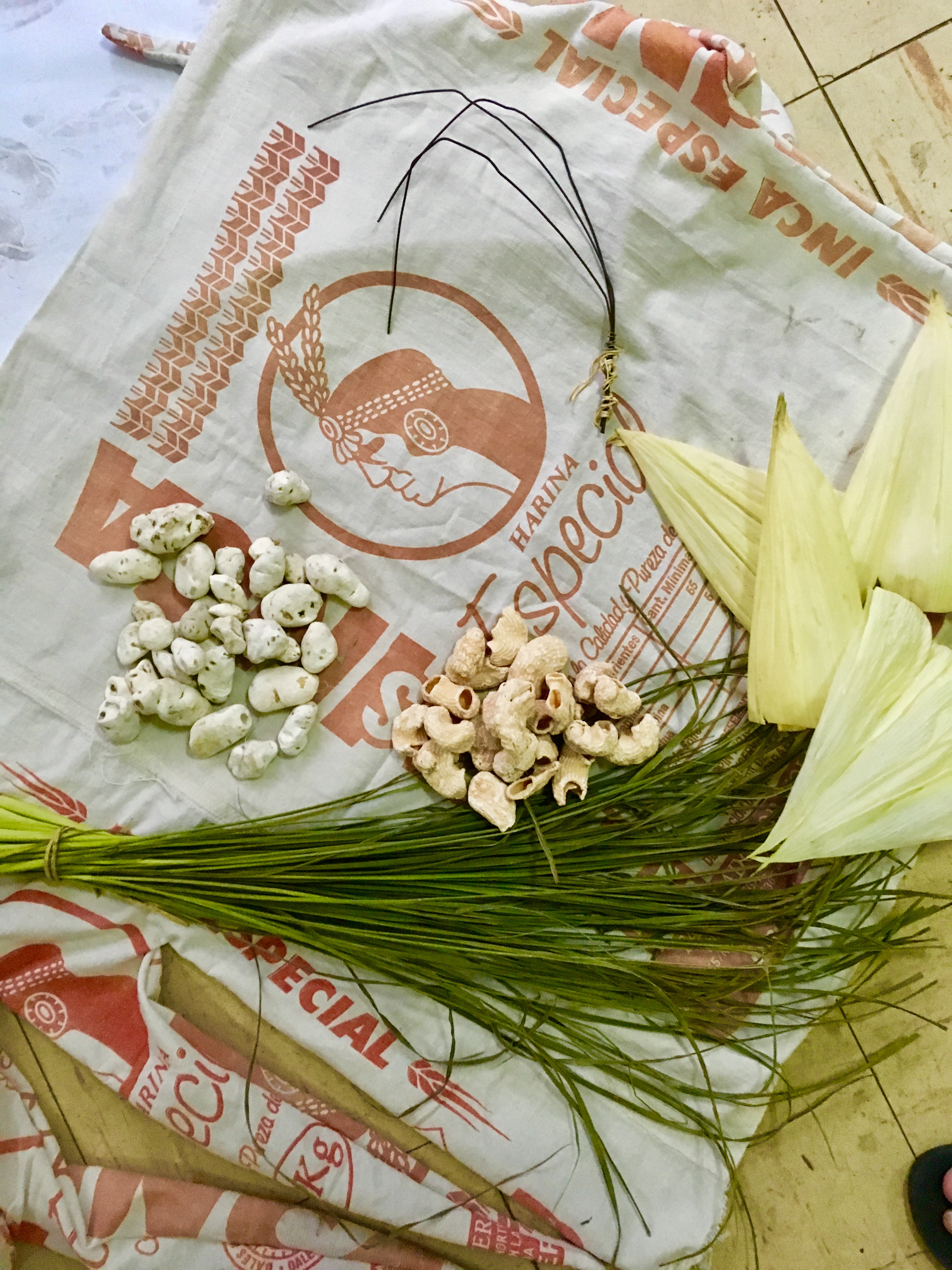 My only surprise that I didn’t notice in the rush to get ready was that we actually look a little blood splattered and scary. Ah well… we were at least artistic and challenging. 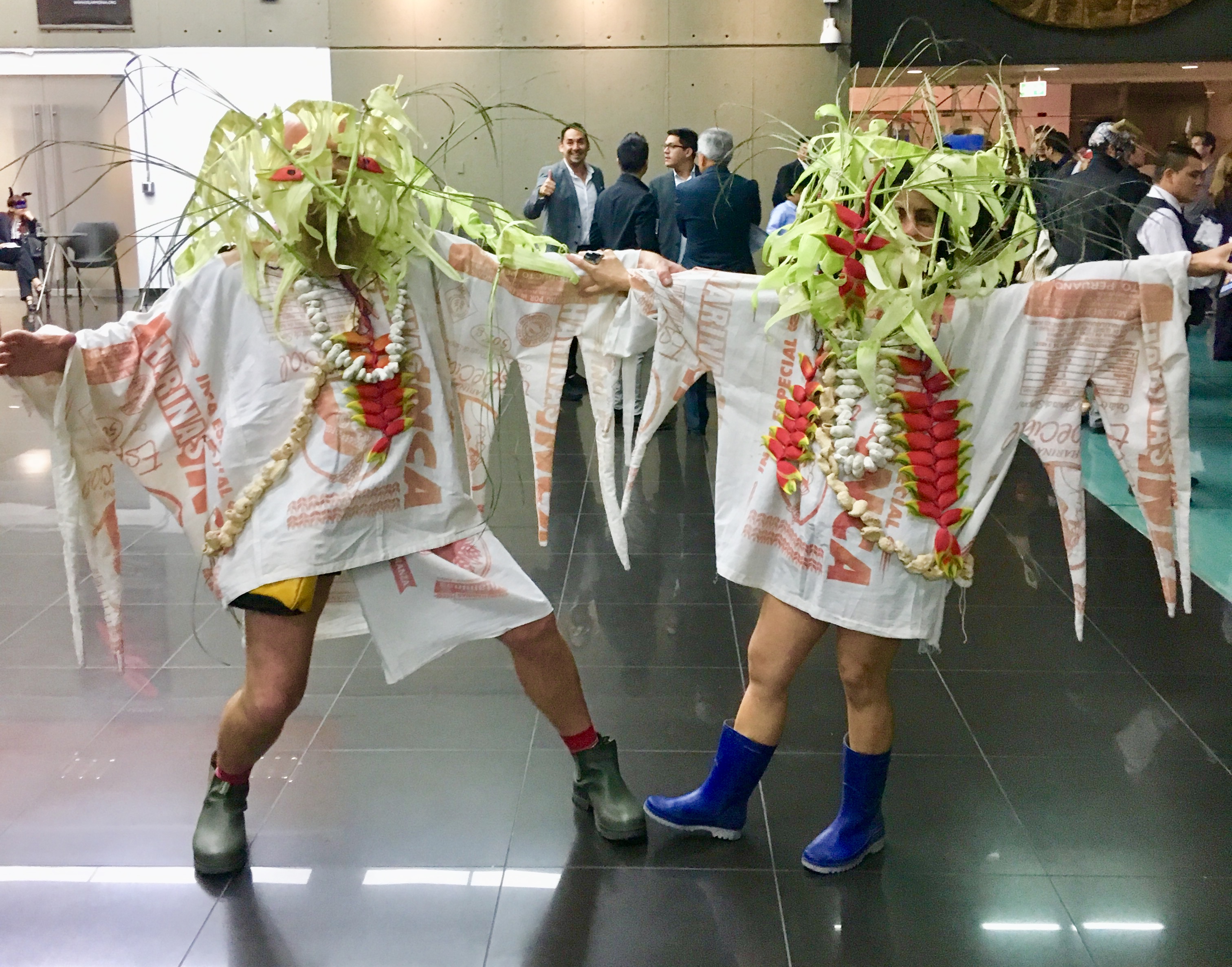