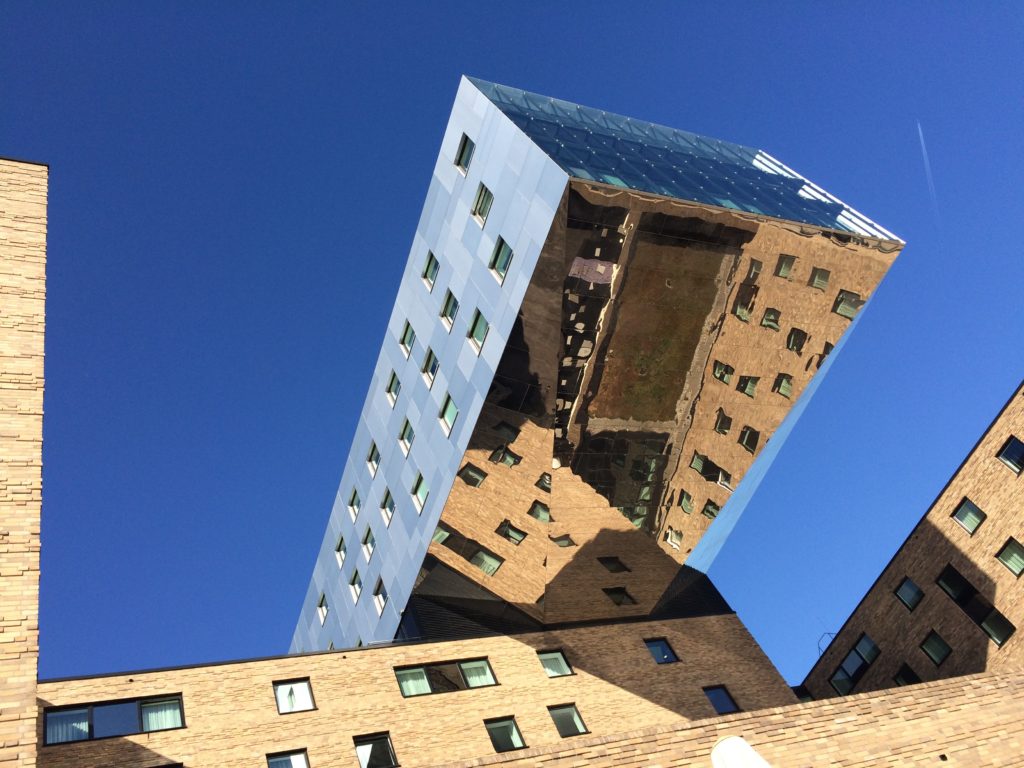 Buildings jostle along huge tracts of the river. Mostly new and mostly daring. Glossy sleek blocks with mirrored bottoms thrust out towards the river. Standing below and looking up was a dizzying experience. Bright colours punch out next to sleek modern retro Deco buildings. It took my breath away seeing it all.

So Berlin became the capital once more. Bonn was gone and Berlin bounced back. But with the installation of Government came a tempering of the city’s wild nature. As politicians arrived, their entourages brought a sobering sense of responsibility. The West had freed the East and it was assumed that all would continue to rejoice as history started a new chapter. Some Berliners I met who were born and bred in the DDR speak of life with quite happy memories. Not all broken lives, just different lives. They feel that their lives and their own families’ history are viewed as somehow wrong. Though they say they are glad to have the freedoms of unification they find it hard psychologically to balance everything still. Berlin is bursting with forward minded vision. Onward ever onward but with its recent history walking along side it, hand in hand. 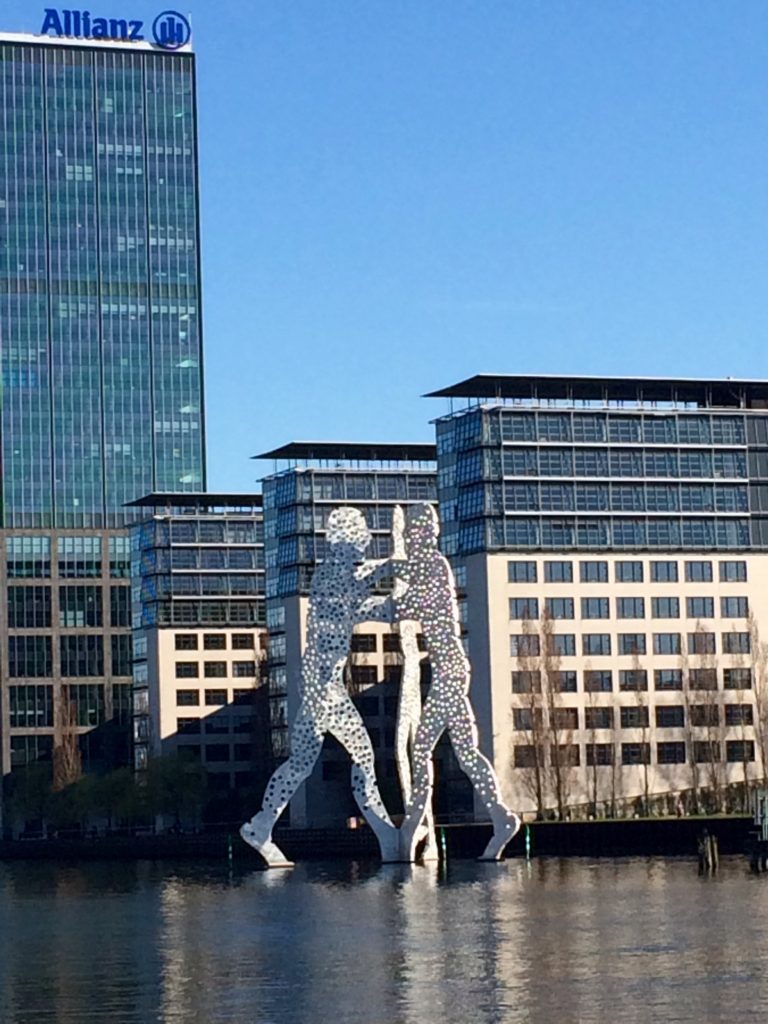 At the meeting point of three districts stands this enormous Molecule Man artwork of three hole-filled men joyfully supporting each other. Or are they hugging? 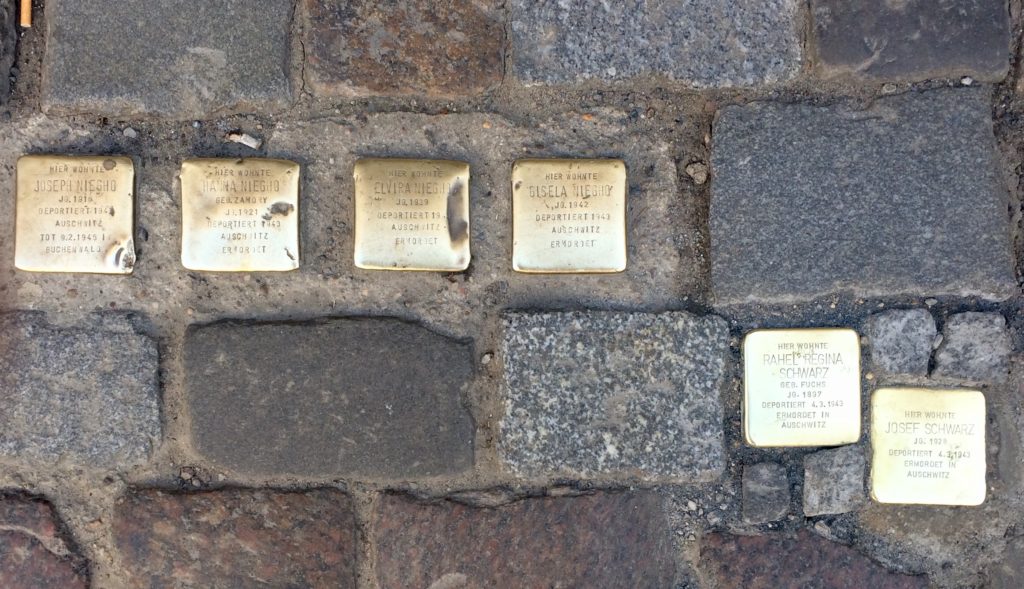 The past for Berlin is full of ghosts of both wars and the wall and The Prussian Empire. There are dotted all over the city small memorial plaques on the pavement at the doors to shops and houses marking where Jewish people were taken to be deported to concentration camps and murdered. And then in the areas where the wall once stood are different plaques which mark the spots where East Berliners were shot and killed trying to flee to the West. The moment the wall went up was very sudden. Barbed wire was laid almost overnight and the wall building began that day and mostly finished that week. Families found themselves on opposing sides. West Berlin was an island suddenly encircled by the New Democratic Republic.

Alexander Platz. The DDR World Clock with world time showing the destinations you could not visit. The body’s inside rotates to show world time through illumination. It’s fabulous old school Soviet modernism. The solar system on the top rotates every minute. The Rassel (TV orb) is behind the clock and not part of it. It means babies rattle I’ve since learned. 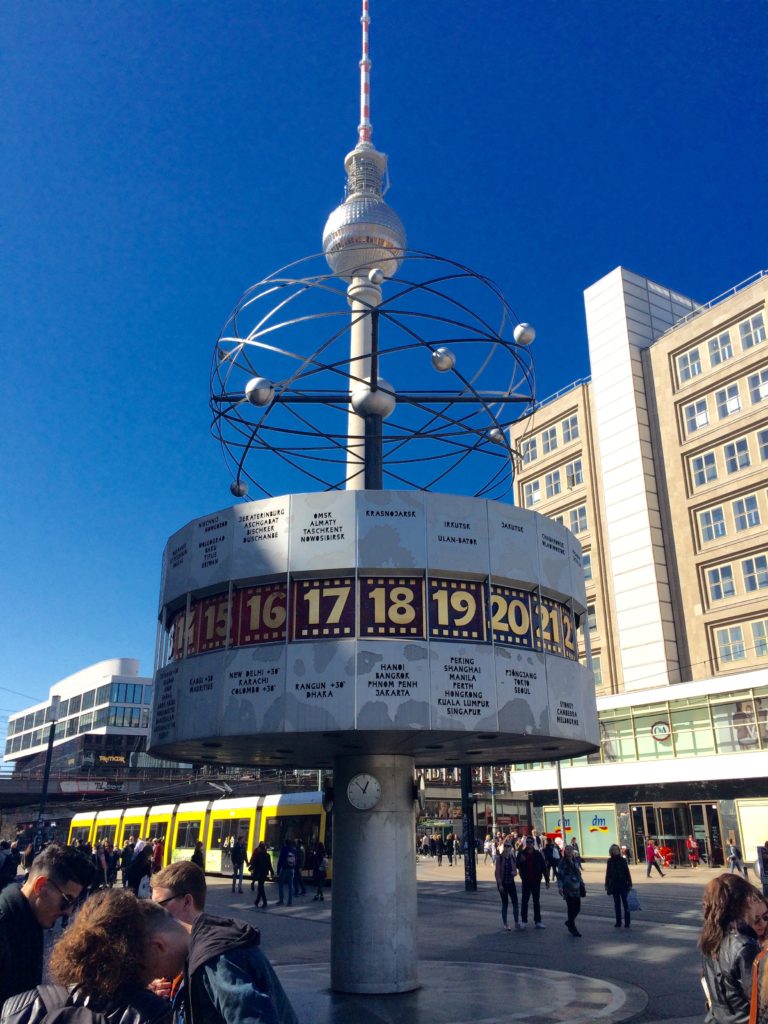 Alexander Platz underground station. A truly beautiful colour and still gleamingly modern. During the divided years these lines stopped running between the two parts of the city. In this station a doorway was covered over a paper thin sheet painted to mimic the tiles and the escape route became invisible and cut off from public eyes. 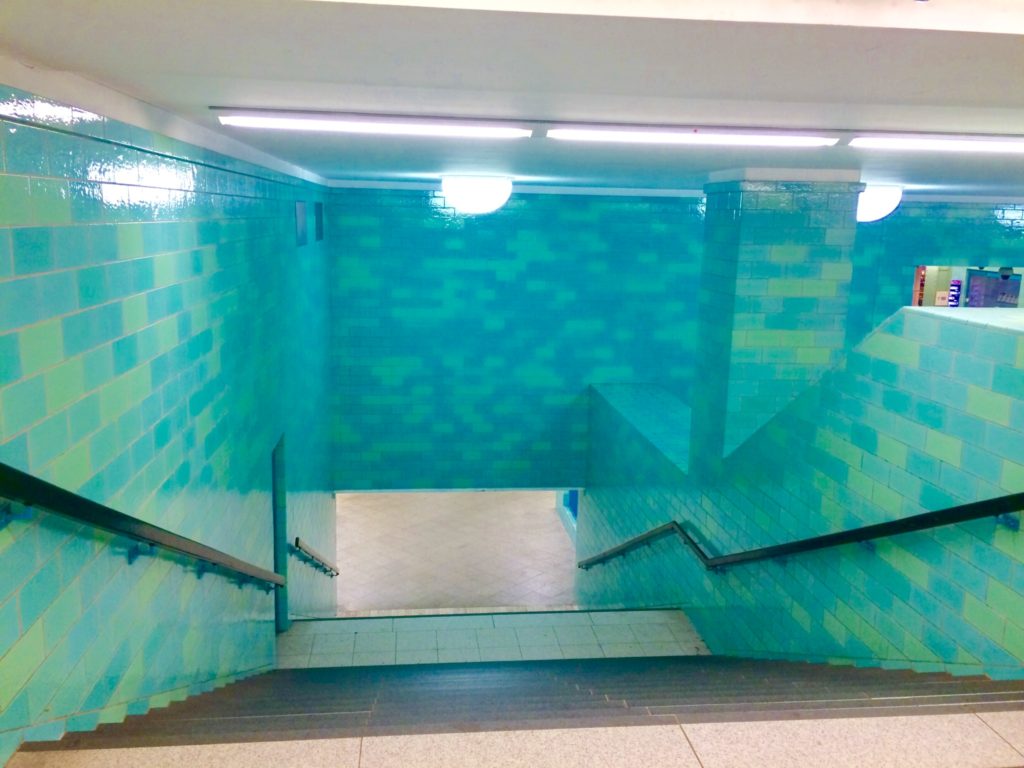 Along Frankfurter Allee they built giant expensive accommodation for party favourites. These ran the entire length of the parade street. Their architecture is however rather confused. It’s got elements of Greece, the 30s and the 60s. 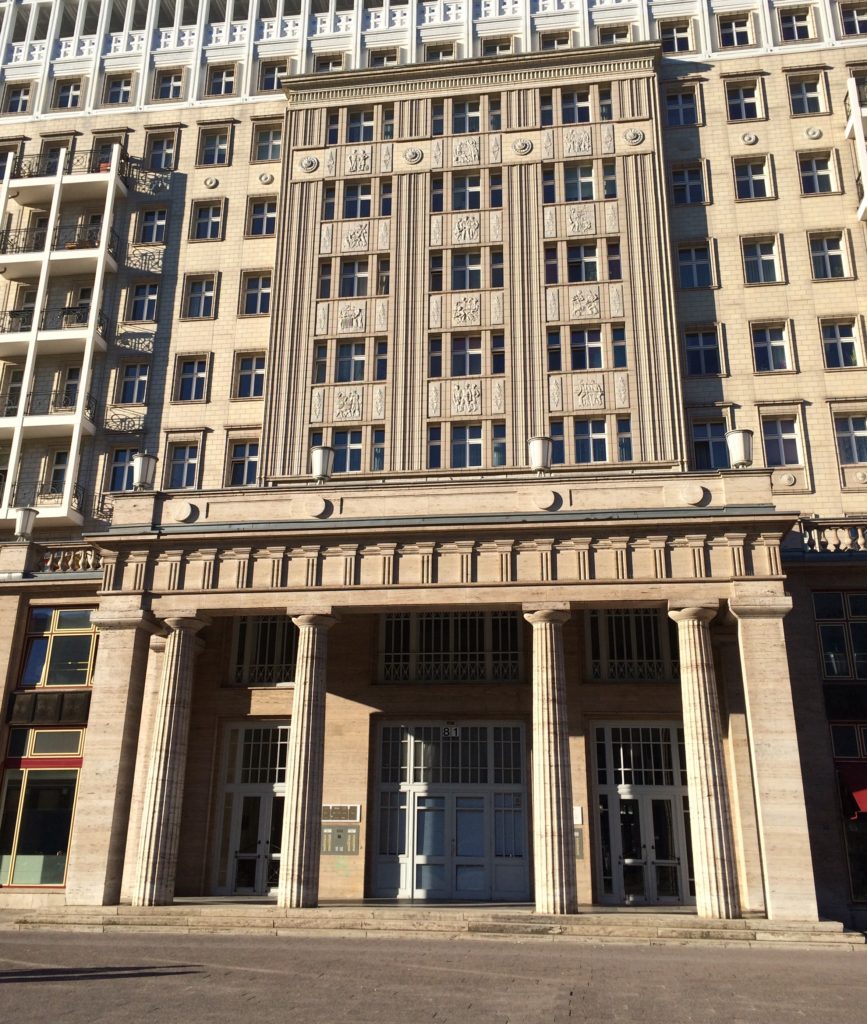 Spare me the Spa 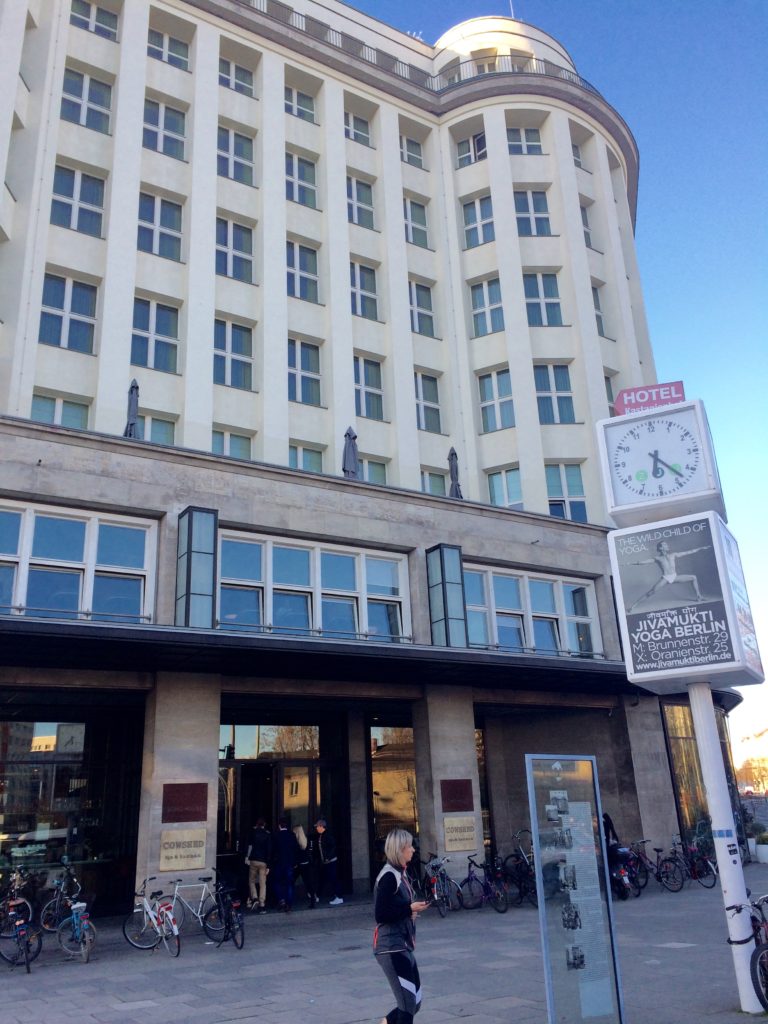 I had fancied a spa or as Anette suggested I could get a Hamam in this gorgeous former department store that’s the hip hotel, Soho House. I was sold on the idea. Then I stopped outside to read the history behind the glass next to the clock.

During the Second World War this building became the head quarters of the “Reich Youth”. Then when Berlin divided it became the initial seat of power for the DDR leadership. Purges and death sentences took place inside. I suddenly felt this was the wrong vibe for the restful sauna experience I had planned.

Much of Berlin has at times been destroyed or flattened through wars. Quite a lot of what represented former East Berlin has now gone. From the Democratic People’s Palace to old DDR residential buildings. However one small change recently may be literally signalling a change in the West’s attitude. The pedestrian traffic lights, stop and walk figures are East German. And plans to standardise them was objected to by many in Berlin. They love their quirky green & red men. They have shops devoted to them printing them on everything, Ampelmann online.