Every place has a spirit of its own. A way to welcome and embrace you. Its unique means to pull you into its society. Yet it seemed that Brussels and I were not off to a good start. Maybe I was now associating it with Brussels Sprouts the rhyming taunt from my childhood that followed me a once hung like the proverbial dust cloud after consuming too many of those aforementioned bitter balls. But that is so far in the past that it didn’t even enter my head as I boarded the Eurostar. Brussels just didn’t seem to take pleasure at my being here and didn’t want me hanging around its very busy hood. I was pretty miffed at first. But it never takes me long to laugh about these things. It took me months to get on with Paris after all. So you must take a place as you find it regardless. Get out and look about and enjoy the lives being lived all around you. 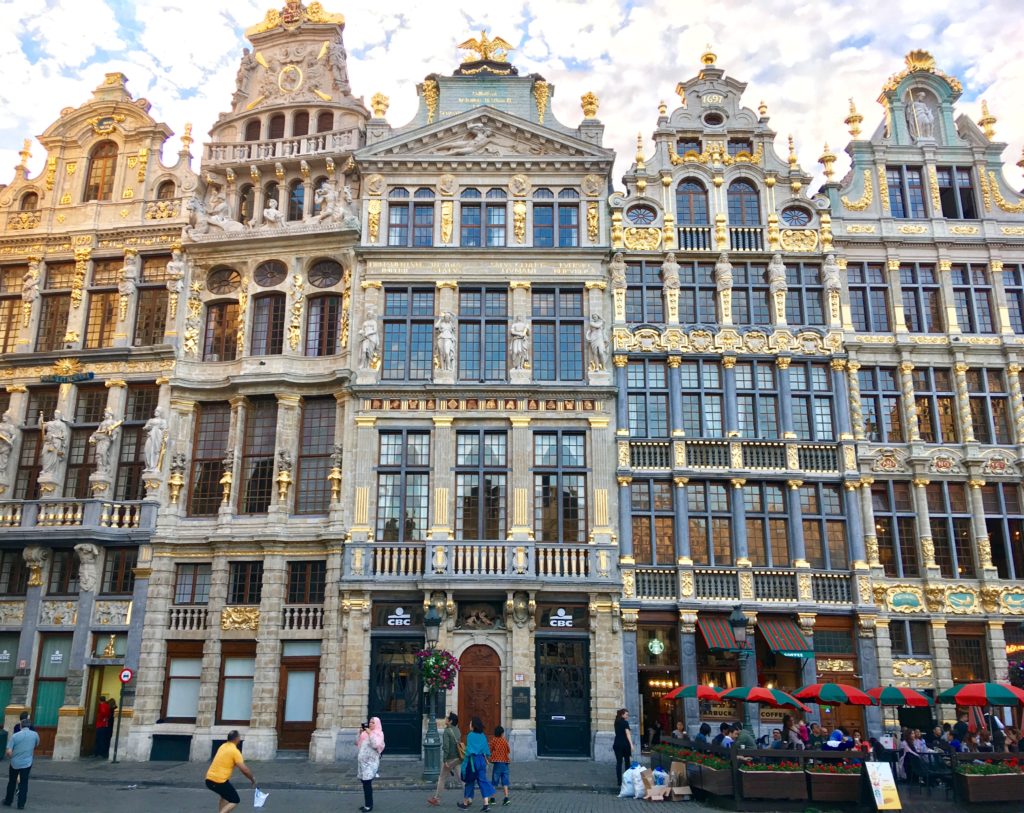 Grand Place or Grote Markt is an architectural cultural melee, or perhaps an Entente Cordiale of true magnificence. It looks like all of Europe in one historic square. French gothic meets the Dutch guilds and sheets of gold leaf wrapped everything. That includes that most famous Belgian export. Chocolates! Yes Belgian Chocolates.

Stop there for a moment and consider a very great dilemma afflicting all around the Grand Place. Narrow streets of immense handsomeness run away from the Grote Markt and these tall alleyways are crammed, one after the other with chocolatiers and Salons et Maisons du Chocolat. I know, the levels of deep silky chocolate dustings in the air are nothing to the diabetes inducing levels of sugar, clanging from every showpiece window display. 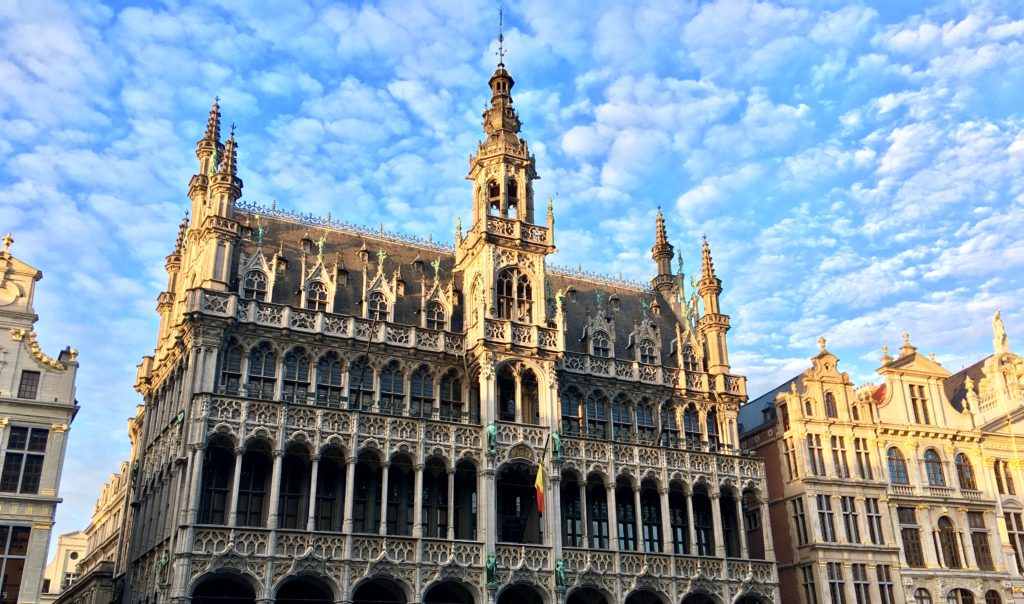 Somehow you are meant to just select one shop before you begin selecting from their sumptuous selections. My head was hurting from the choices and the selections and I just needed to step away from the fug of indulgence. I randomly approached one particular Huis, Neuhaus (Brussels 1857) and got totally greedy for every kind of coffee flavoured chocolate they had available. They had so many different coffee chocolates that my high was getting higher. I paid and hurried away from the wicked streets after I stopped for the softest Macarons and some marrons glacés on offer in other windows. Well… wouldn’t you!?! As I type this I’ve had to go and get the box of chocolates out to check the name. And eat some more of the most creamy dreamy smooth coffee creations to ever amuse-bouches.

There is a crisis mode built into Brussels culturally and historically. I had not realised that French speaking Bruxelles sits surrounded by Flemish region of northern Belgium. While Brussels is the official capital of Flanders, it not only has an independent regional government but it also the administrative centre of the European Union. This tension among different regions seems to be a significant thread throughout the area’s long and complex history too. But all places, always change and adapt to new challenges. The place remains and we merely weave stories around them as we pass though. 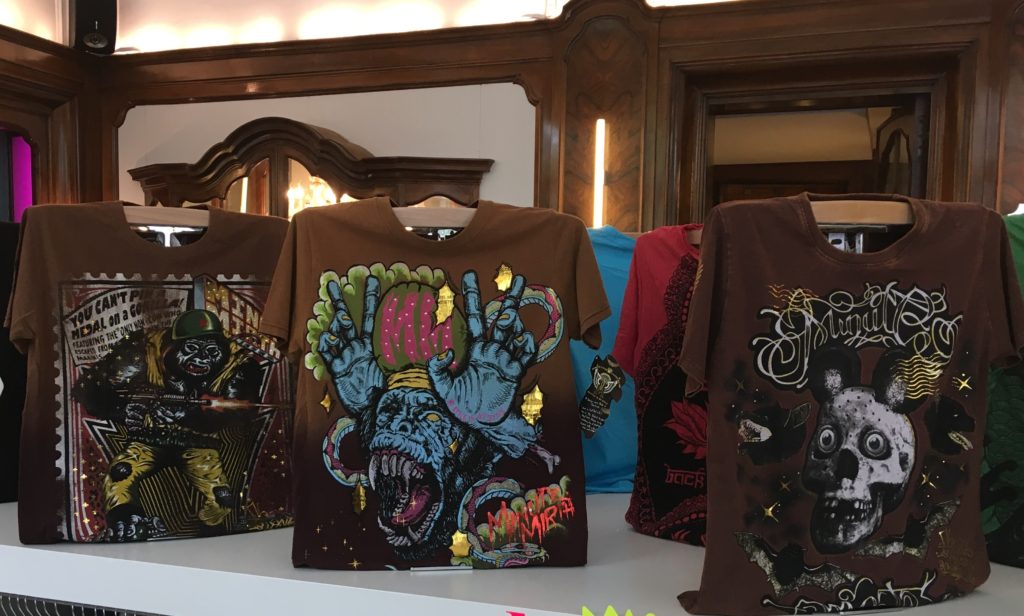 Up early and time to go get some great coffee. I set off to find a highly recommended coffeeshop and walked some distance only to find that it is shut until 4th September.I then walked about parched for too long until I settled for an Eco organic place. I ordered a double espresso with a little milk. The milk was a small plastic throw away UHT milk! Not very organic or eco.  Found the coolest t-shirts only to be told that they are only in small and medium sizes. Great shop though Mystical Bodies. And so my day continued with nothing at all working out in my favour. However, no matter what the obstacles Brussels placed in my path I never lost my gaiety for this city. It sure is a flirty place. 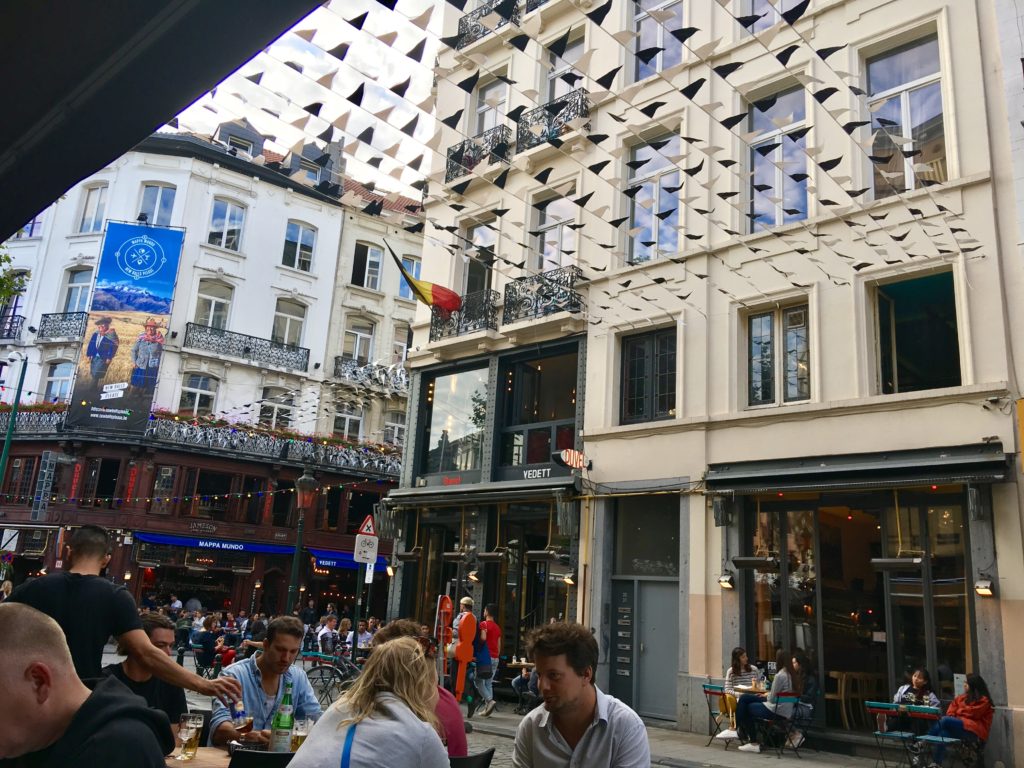 With kind help I was sent to eat Thai food in the street that seemed to be only Thai restaurants. Every single shop was a Thai place. I chose Fanny Thai obviously, though other eateries are available.They did a super starter of satay tofu sticks. They were a bit floppy and wide but who doesn’t like getting sauce all round their chops? Look away there’s nothing to see here. Yes that’s a beard smeared with peanut sauce but there’s nothing to see really. Absolutely no cameras allowed. Just keep walking and stop staring. OK… I’ll wipe my beard. I must remember to stop eating like a viking abroad. 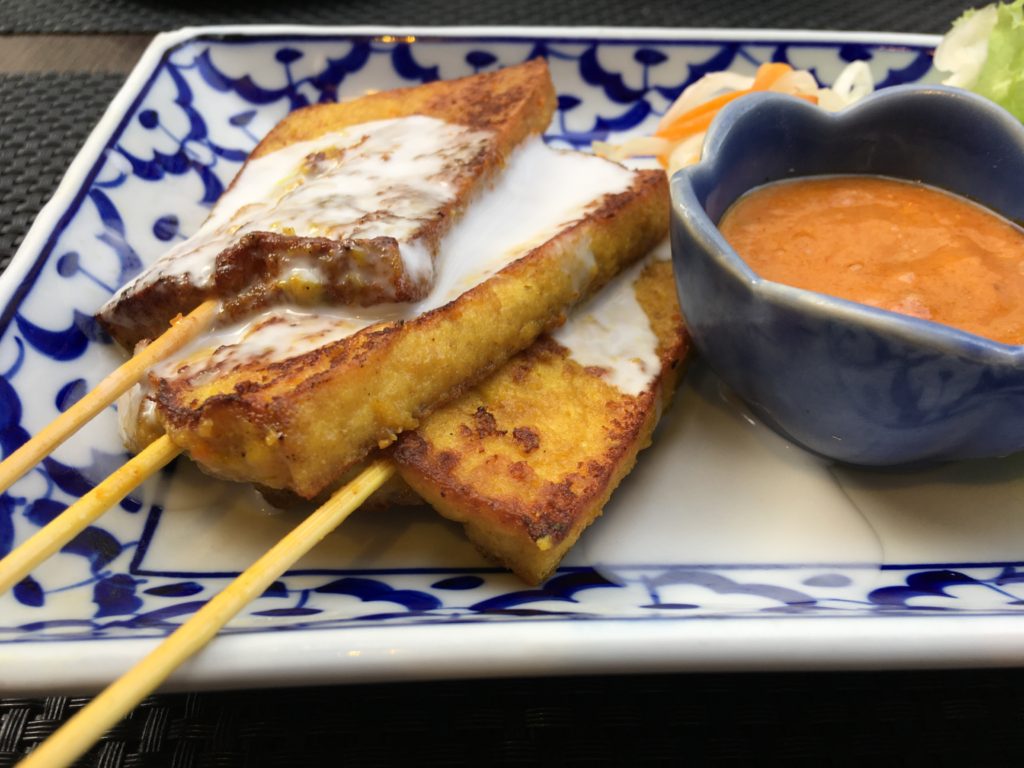 Through conversations with various people I began to sense a great deal of tension in this city. I wasn’t convinced that it was feeling confident just now. All this Brexit stuff is beginning to catch up with people both here and in the UK. Much of the wealth of Brussels is dependent on the EU and these negotiations that we in Britain think is all about us breaking away is also about the EU’s future too. How that break is resolved matters to everyone not just the UK. It will determine the future pathways here in Europe but especially in Brussels. We don’t need any trip hazards. 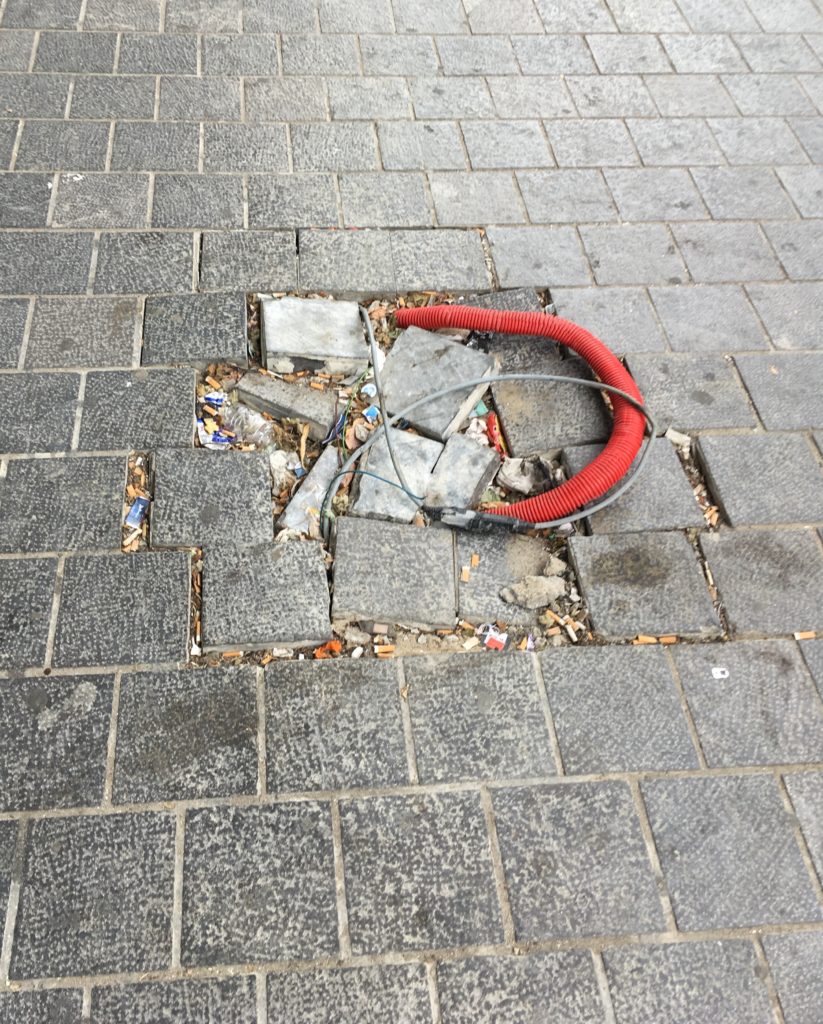 In the UK we are always being told that we have to do things a certain way because of Health & Safety rules “imposed by Brussels” which I’m guessing is a bit of a uk.gov fib as they don’t seem to be slavishly enforcing many rules here themselves.  This piece of paving is so dangerous it must be an art installation with cameras recording hapless trippers. How we laughed when I broke my coccyx. Get some signage!

Brussels really did gang up on me mind you. I paid extra for a nicer room and was offed the standard one with bonus leaking taps, drip, drip, dripping. After an hour I squeezed an alternative room from them but it was under immense duress. Finally by half midnight I was in my room when I was plunged, suddenly into darkness. Power cut. They said it was maintenance but I just didn’t believe them. With no power large heavy doors had closed and locked and I felt trapped. I always search out fire escapes on arrival and check they are not locked. So I had noticed that the emergency stairs here were just a blank white door with no sign or sticker other than a small one hanging from the ceiling. This would quickly be hidden if there were smoke in the corridor. I waited but nobody else seemed to be staying on my floor at all. So to escape I had to telephone for someone to collect me with his torch and take me out of the sealed wing. I certainly couldn’t sleep in here so I waited outside the hotel for the power to return before I did. I was told that all customers were sent letters to explain that this power cut was scheduled yearly. Yet as I stood outside I heard him tell all the arriving guests about this planned maintenance and them all not receiving the letter either. However a passerby told me the power always goes off. In Brussels? That’s what you get for standing outside in the middle of a power cut that seems to be affecting  your hotel only and I saw no maintenance crews anywhere. Do they just turn it off in the naughty awkward wing?