I’ve popped up to ‘ye olde smoke’ for a few days over Easter. I’ve plumped to stay in the City of London for a change and go in search of its Roman past. Also a good choice as all of the city is shut over Easter. And by shut I really mean shut. Coffee shops, restaurants, shops, places of interest the lot, all shut. But the peace and quiet is wonderful. No arrogant suits bustling about. It’s truly a fabulous time to visit the square mile.

So my journey begins with a walking guide, Roads to Rome provided by the City of London Archaeological Trust. A rather splendid pamphlet with a short walking tour that leads you to the many Roman remains still in the City. Londinium was founded in the middle of the first century CE. On the north bank of the river Thames at the lowest point where a bridge could be built that was still easily accessible from the sea. This bridge was of course London Bridge.

On the northern side running into the Thames were two other rivers that now flow beneath the city, the Fleet and the Walbrook next to which my first point of interest was built. When Bloomberg set about constructing a new European HQ work was halted after they discovered remains of a previously excavated Roman temple to the god Mithras. The original find was back in 1952-54 in a chance discovery on a WW2 bomb site. The temple and its artefacts were moved piece by piece and placed on the top of a carpark! Crazy.

Yes seriously. With more of the original site being uncovered the architects were asked to incorporate the space into the new Bloomberg HQ as a visitor attraction. Opened last year as the London Mithraeum this free exhibition is truly wonderful. 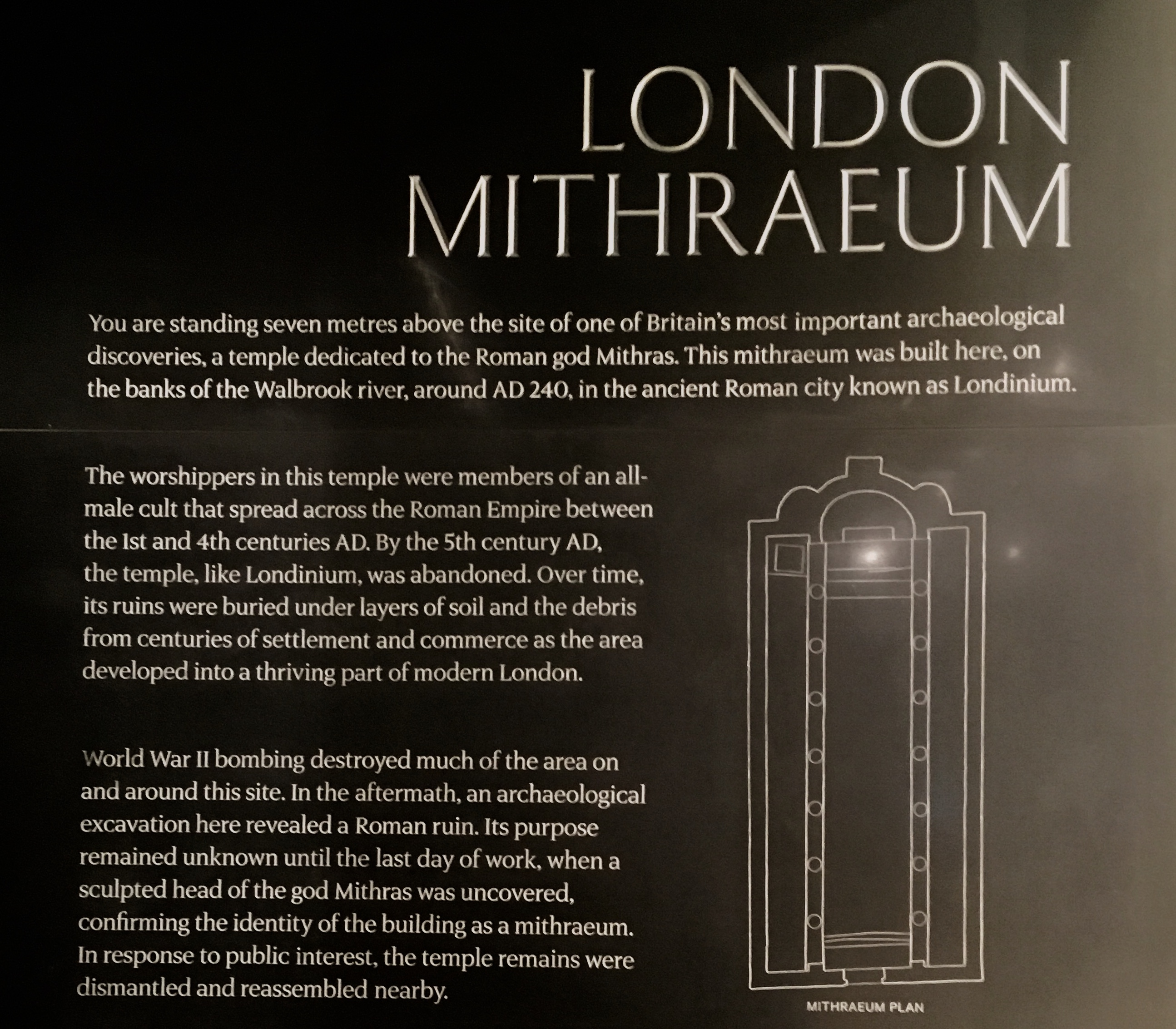 If you haven’t been, then go now. Stop working immediately and head over to see this amazing, mysterious and secretive Roman temple to the Architect God, Mithras. Little is known about this cult however this allows us to project our own ideas into the space and run wild with our rampant imaginings. To me this private male only cult is either early Masonic or a gay playhouse.

Mithras is often depicted riding the back of a bull and possibly plunging a knife into its neck. This made me wonder if the cult had played a major role in Roman Spain but that’s pure speculation on my part.

The first room of the exhibition has a vast carpet by Dublin based artist Isabel Nolan. A bright 19.45 metre long work exploring the many incarnations of the area since the dawn of time to the far future: The Barely Perceptible Vibration of Everything. This first gallery will showcase the best of contemporary art and this installation is the first of many.

A wall of artefacts found around the temple is cleverly connected to the free wifi and has an online copy of the wall that you can access on your phone or tablet detailing each of the items on display. There is ever a tiny tablet on which the earliest know London debt is scribed. Who knew that the City of London.

You enter the exhibition at ground level and descend to the two lower halls through the historic strata levels of the city that has grown upwards over the last two millennia. On the sides of the stairs down the black shiny stone walls are carved with the layers and their relevant histories at the levels at to which the city had reached at that point. This is such a beautiful and simple way to explain this ground level rise.

In the 2nd lower level space there are three transparent resin  sculptures, copies of actual finds from the temple (the actual sculptures are in the Museum of London that we will get to later). These are mounted above touch screens that allow further exploration of the history.

While around the walls are video projections of the heavens and the zodiac constellations all easily explaining the little that is known about the cult of Mithras by Joanna Lumley. Once you have absorbed all the information here you descend to the lowest space and into the actual ruins of the temple itself.

This is a marvellous immersive experience. You enter in almost darkness and sound of Roman male worshippers are heard as clever LED curtains of light create the boundary walls and columns all aided by a small amount of theatrical smoke that crates the 3D illusion of the temple’s form.

It really is magnificent. As the lighting grows in intensity a huge fan sucks away the light fog and the ruins proper are revealed. During this immersive moment you are free to wander around the walkway to see the space from every angle.

It really is so brilliant. I wish more spaces could be brought to life in such a way. This really is a must see place. You must see it now. Right now.

A quick trot up Queen and then King Street takes you directly to the Guildhall and Guildhall Art Gallery. This rather old-fashioned type of gallery display where every inch of wall space is crammed full of paintings holds a wonderful secret subterranean splendour. Here on this very site back in Roman times was the Londinium Amphitheatre. Yes the gladiatorial Colosseum of Roman London. The outline of which is marked in black on the floor of the square between the Guildhall and the art gallery.

I know… you knew it was there? Well lots of you did. But I will show my ignorance of this as an ex-Londoner of a couple of decades and say that I really had no idea. Partly this is because the City of London is usually so full of folk I just don’t find fun. But also the Corporation of London clearly doesn’t do a good job advertising the wonders of the City that could be visited. Come on all you Guilds and Aldermen, shout about these fantastic places to visit.

The great thing about this gallery is that it is free to visit. It being Good Friday it seemed as though few people were out and about so perfect for me. 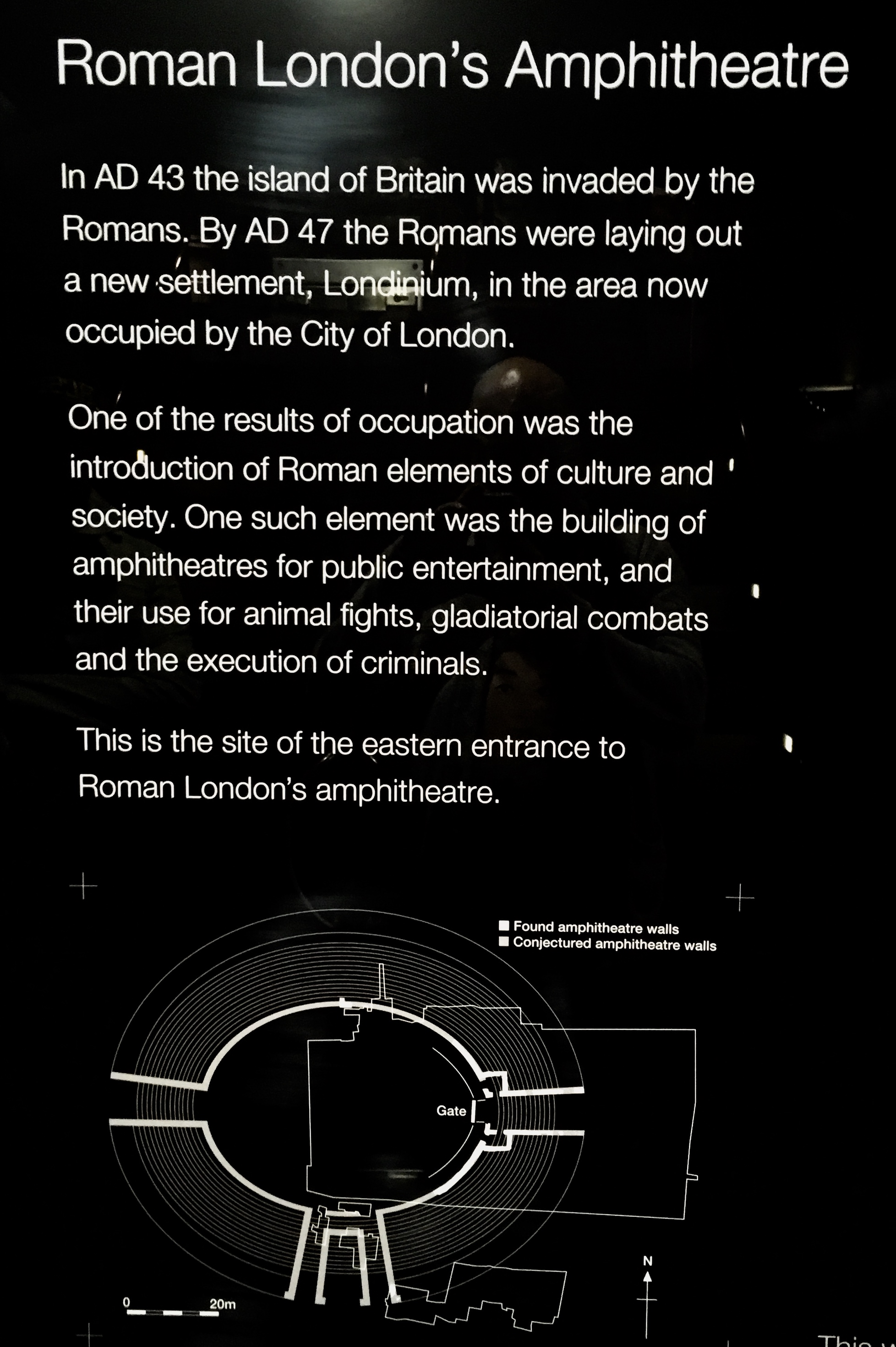 The space contains the bits of the amphitheater that have been found during excavations and the remaining space and the gladiatorial combatants are created with neon green outlines.

This is also an amazing space but I would just ask that the creators of the immersive Mithraeum should be called in to make this a sister experience. It could be so much more exciting. A few young families came in and left very quickly.

The immersive experience would deliver a greater understanding along with a longer hold of visitors. You could do this so easily sp please get going on making this site far more informative and amazing. Pretty please.

Next a short hop to the Museum of London situated by the remains of the Roman London Wall. This area is very familiar to me from my studies at Junior Guildhall School where I began my voice and composition studies decades ago.

But how much do I love the Barbican complex? So very very much. And nestled among these vast blocks and aerial walkways and vast waterways are the edges of the Roman Walls that were built up in later centuries to keep the city defended.

Inside the Museum of London I headed to the Roman Galleries to see the artefacts from the Mithraeum. 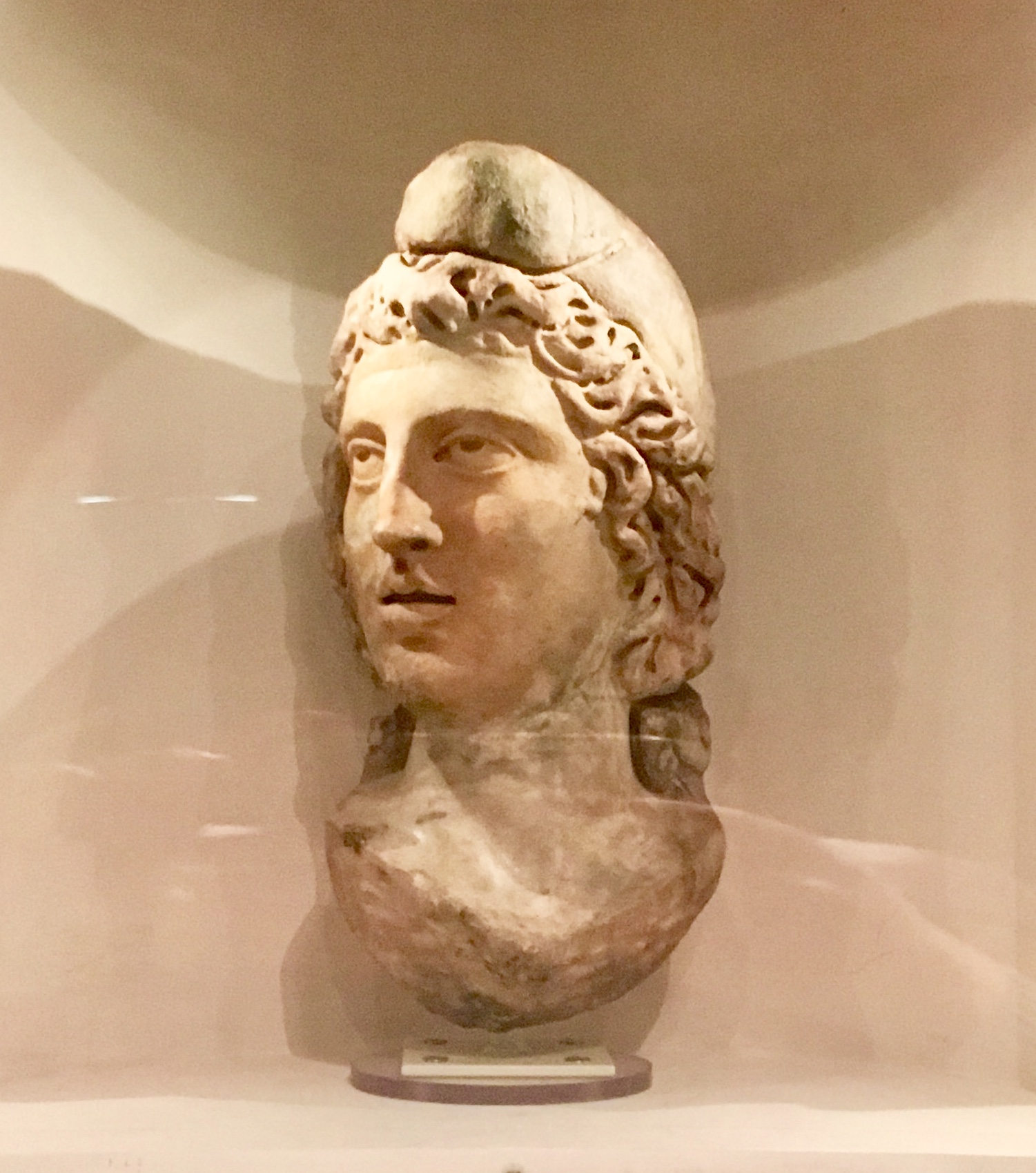 There are some very nice models of Roman areas of London to see in the museum. I have always enjoyed a good miniature of buildings or villages so these were a real treat.

There were also a series of rooms laid out in full size to show how Romans lived and decorated their homes. And not just those of the wealthy but the poor too. Social history is always more real and immediate to me.

The museum is rather overly lit with modern LEDs all around the building. Especially the FTSE style lights around the café that were so over stimulating that I had to leave quite quickly from the over sensory inputs all around. 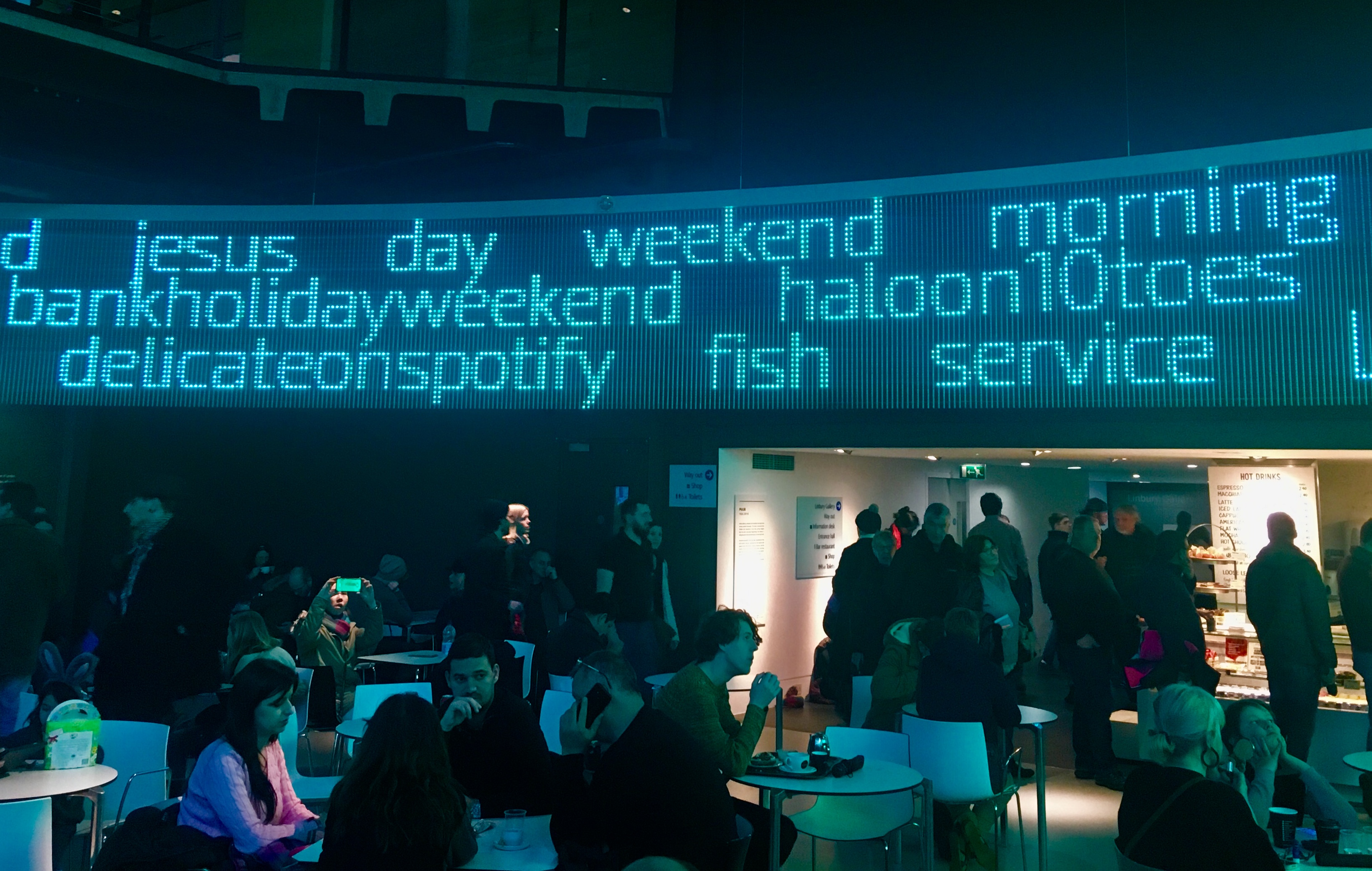 I wanted to visit the Billingsgate Roman Bathhouse but as with so many things these days if you don’t book online and print your own tickets you just can’t visit. While this is great for many there are people I know who have no access to either a computer or a printer. This rules them out from ever making a visit. While it is great to offer online booking you really ought to hold on to some tickets that can be purchased at the door. Not achieving entrance to the bathhouse, I know… a gay man refused entry to a bathhouse! Totally shaming!

But it gave me time to whizz to the British Museum which as ever disappointed and frustrated me. I want to love it but every time I visit it is a strain. From the long long queue to get through security to the sheer volume of people inside.

You can hardly see any exhibits. Also finding Roman artefacts seem quite tricky among the Greek galleries. However there were some nice mosaics up the staircase but it is not possible to stop on the stairs to enjoy them.

The one thing that always brings a smile to my face however when I visit the British Museum is the address. It always reaffirms that I am great and that is… great! 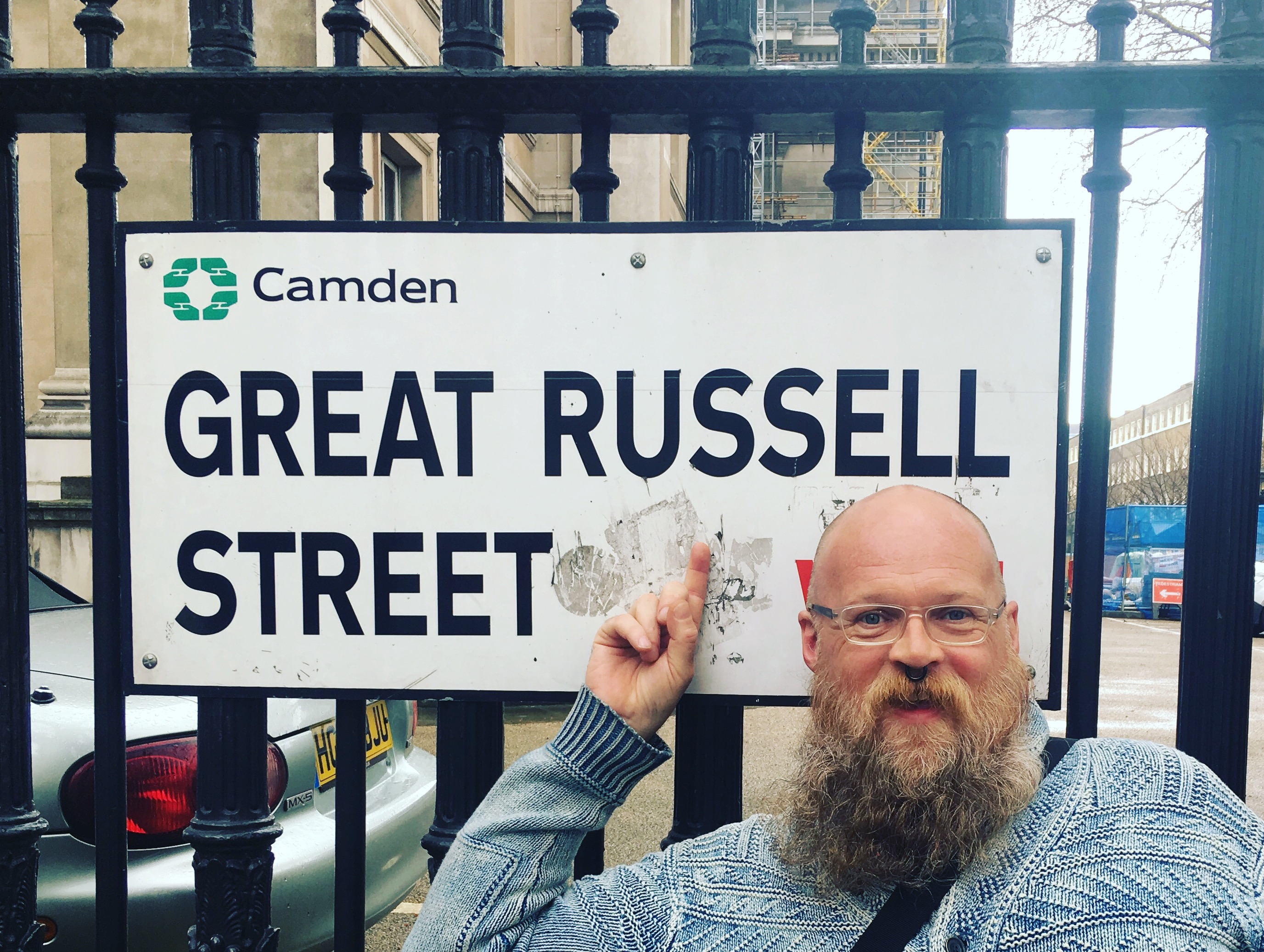