Everyone told me that you can’t visit Rome without seeing the Vatican. But I will admit to having an unnatural fear of religions. But the point of my journeying about has always been to over come any fears and to do things I don’t feel comfortable with. To push myself to do things I won’t enjoy and so I set off for Vatican City. 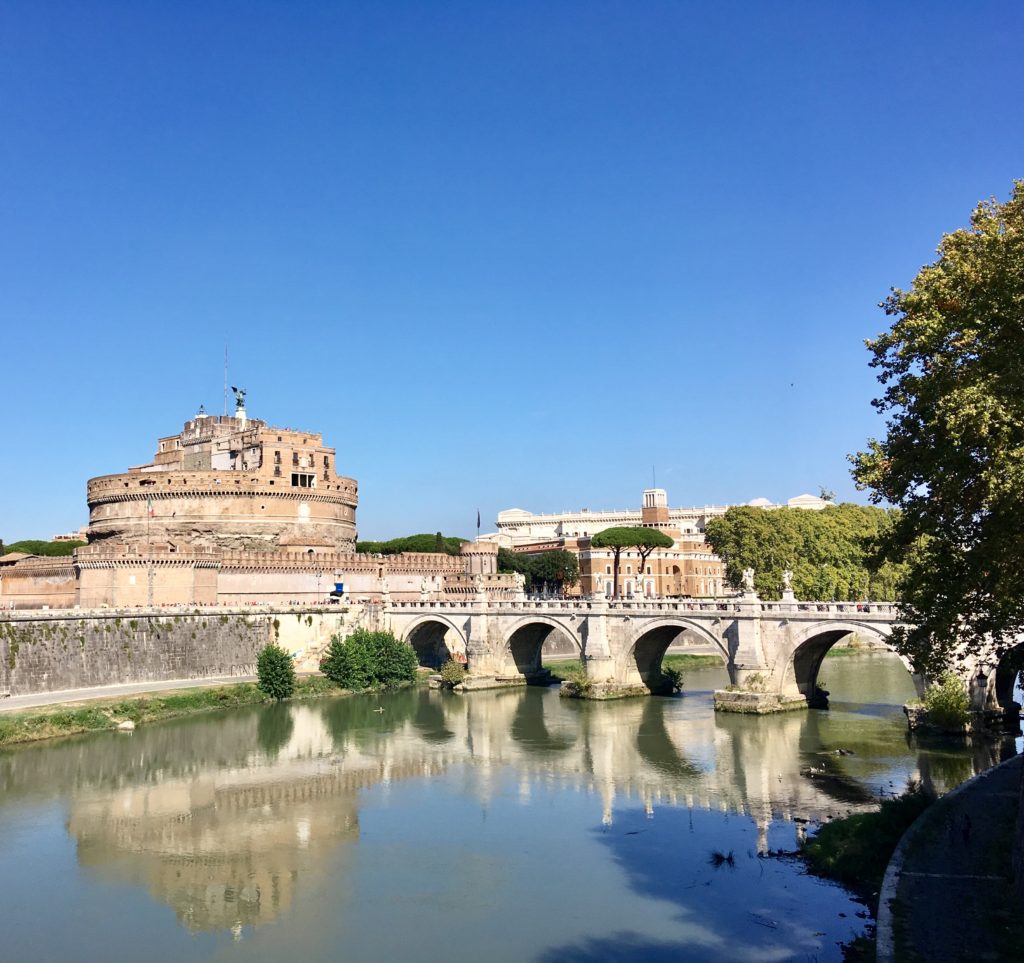 As I approached the Tiber the Castillo San Angelo came into view. The castle is in fact the Mausoleum built by Hadrian for himself, the gay emperor and was used for the interment of his ashes and of subsequent Emperors. It was also used as a fortress by several Popes. My initial surprise was how low down the Tiber river is in relation to the level of the modern city and did assume that this was a clear demonstration of how over time cities rise but I was later informed that this is because the river can flood and so the height of the city keeps it safe during rising waters. 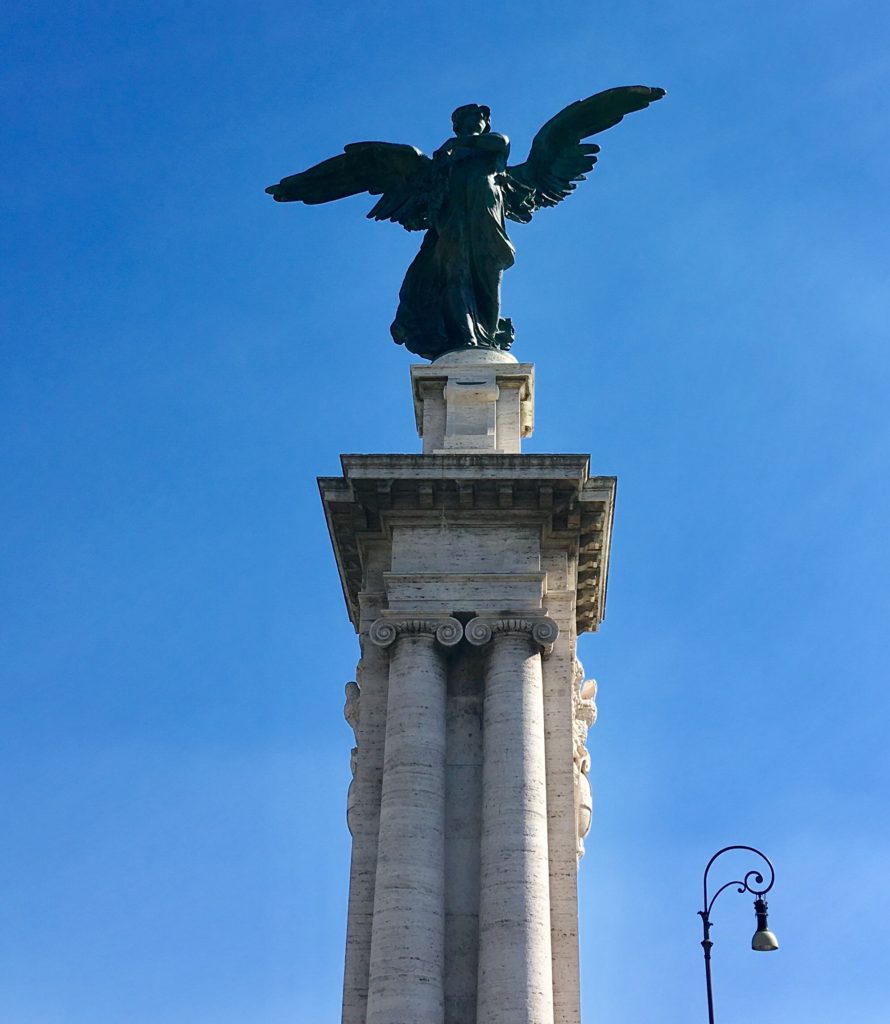 I crossed the river on the Ponte Vittorio Emanuele II. The bridge has four bronze winged Victories on high socles or pedestals in two pairs at the start of each side of the bridge. Victory has long been a beloved symbol of the Romans. There were many temples to Victory in Ancient Rome. She stands aloft the top of the Altera della Patri that I visited in my last blog. It’s seems telling that she is the highest figure on a tomb to the Patriarchs. Much like the way Mary seems venerated higher than Christ in the Catholic Church. The sides of the bridge are flanked by grand travertine limestone sculptures of figures caught in eternal struggles. 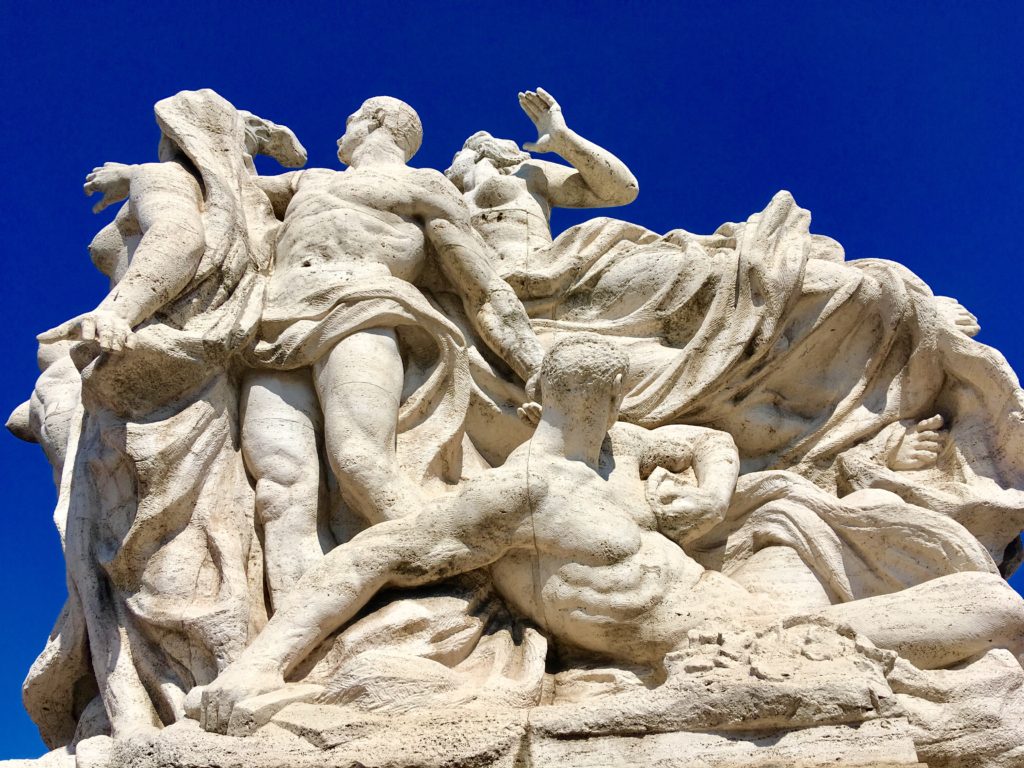 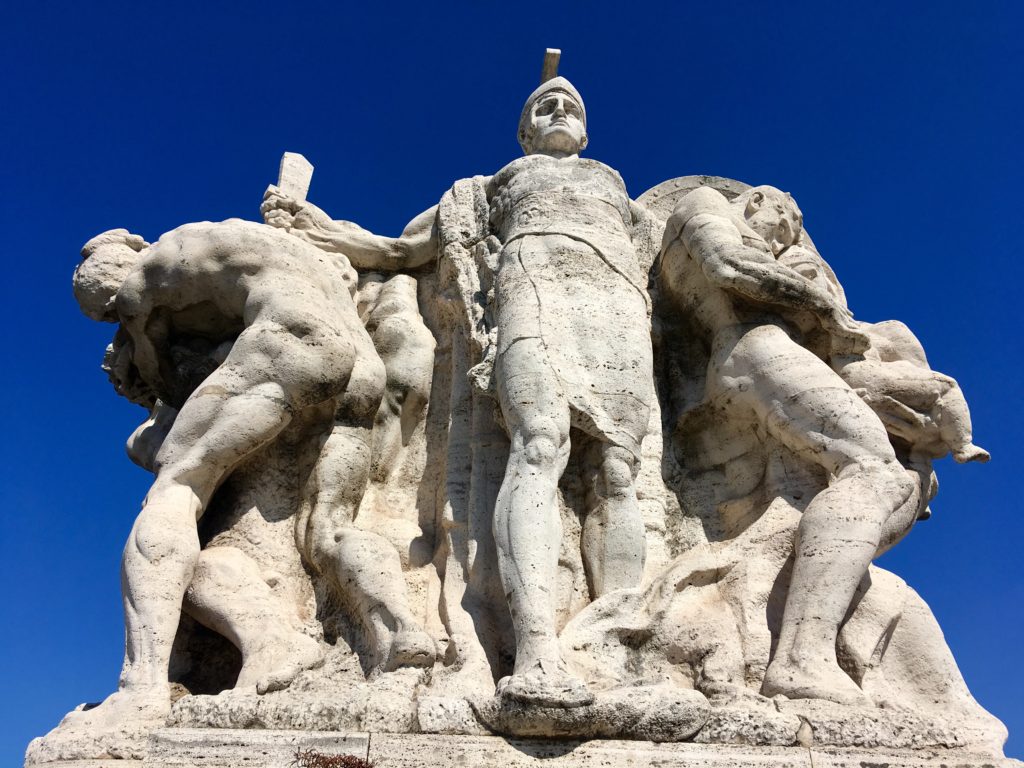 Just across the bridge I reach the wide boulevard of Via della Conciliazione that leads to Vatican City. The entire vista was created to draw your eye to the magnificence of St Peter’s Church at the end of this great road. 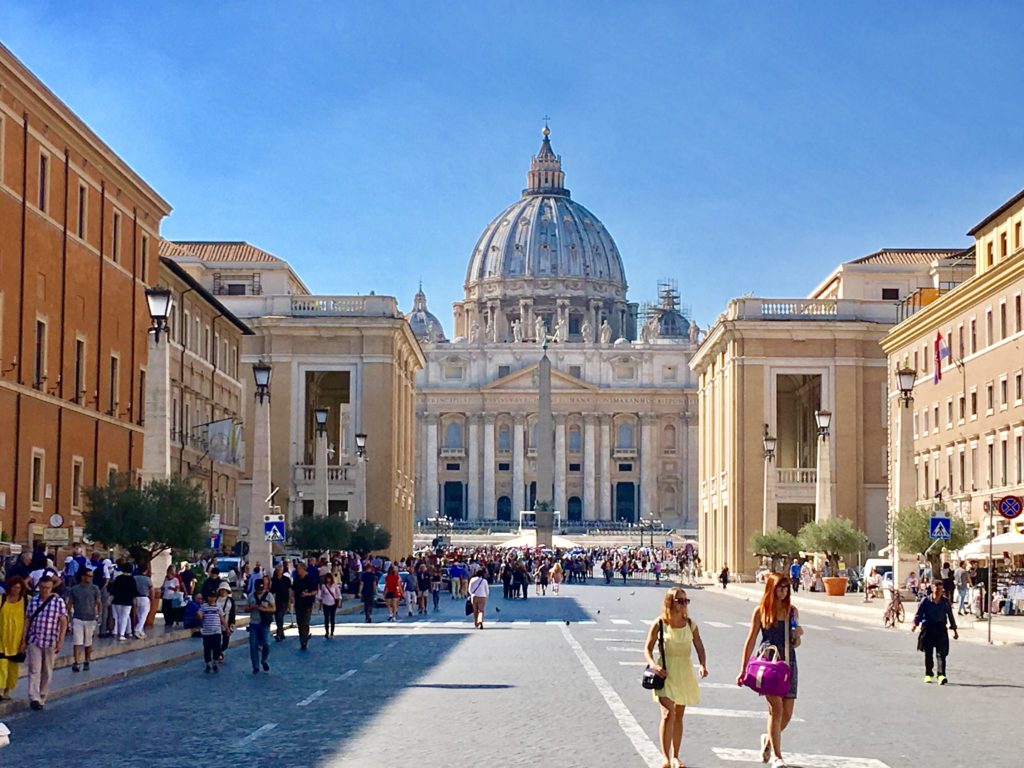 I love the way the perspective moves and transforms as you stroll ever closer. With each step I seem to shrink as the buildings and the dome grow ever larger. 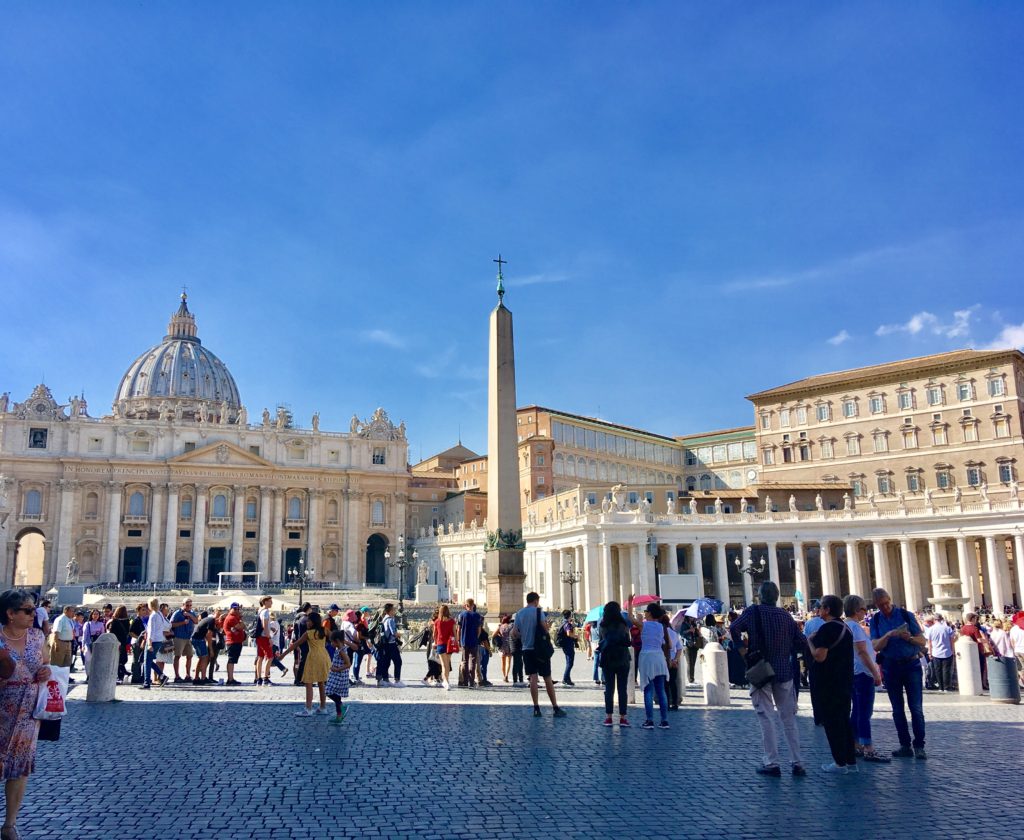 Finally I reach St. Peter’s Square and the crowds that mill about like tiny ants among the spectacular buildings. I had every intention of visiting inside but with all the guys on Segways pedalling tickets I suddenly realise that I cannot pay to enter this State with a State. It seems to have too many echoes of the den of thieves when Jesus cast out the money lenders in the Temple. I understand that money is needed for maintenance but as I was not going there to worship or pray I decided I could not to enter this time. No offence is intended either. I would love to see the great artistic endeavours that have made this place so breathtakingly stunning. But we must all be allowed to make our own decisions. I would have been a great deal happier with an official ticket office rather than the robots-on-wheels touts and their up-selling aggression.

Instead I decide that a trip to a barbershop and spa would suit me better. My feet were aching from walking around 20km every day visiting all the amazing places and I found a little haven in the vicinity. Wonderful Wonderfool is a barbershop with spa treatments. What a gem to find a place geared up to offering men a space to get spruced up and to have the stresses and aches pounded out. I started with an hour’s work on my feet. They were tidied up and scraped and polished. My toenails were buffed to a shine too. 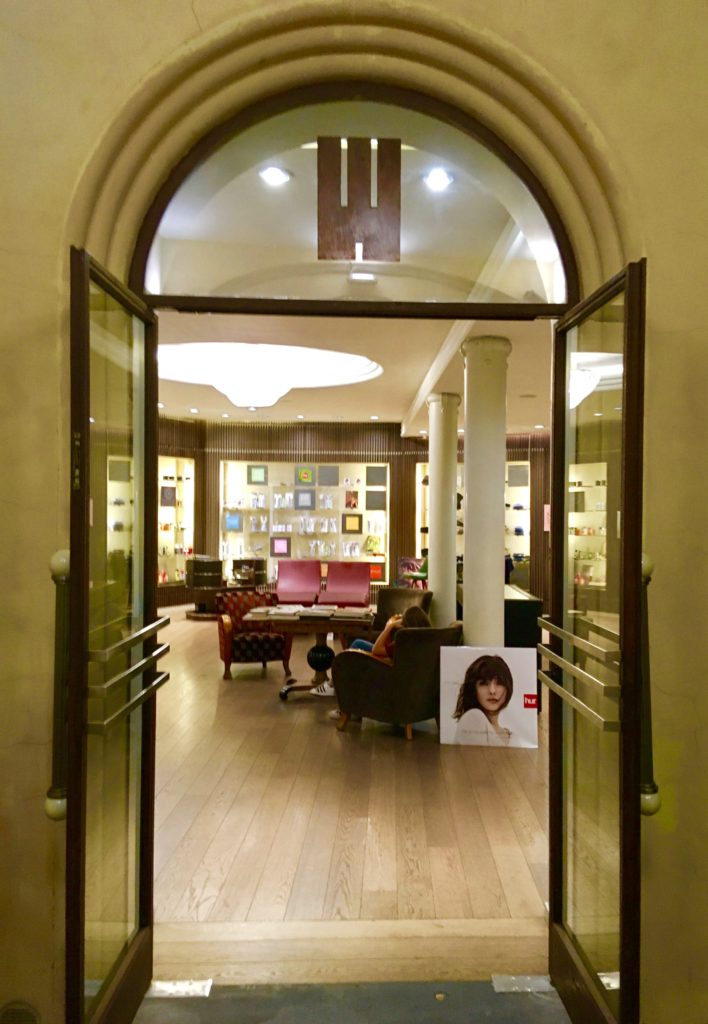 Then to the barber for a head shave and a beard trim. Finally I had a 90 minute massage. This was the best massage I’ve ever experienced. I showered and was led to a beautiful grey stone room. My masseur started with me lying on my back not my front. At first I thought this strange. My legs were kneaded along with my arms, chest shoulders and stomach. Only after all this was I turned over and my spine was treated. This was so clever as by this point I was totally relaxed and it allowed the masseur to unlock the tension in my spine. Pop and crack went my back. Joy and delight followed. I had intended to get a taxi home to my apartment but I felt so elated that I walked. The prices here were also much more honest than most spas. It wasn’t about mud or clay or seaweed extract. I was oiled up head to toe and all the aches were totally eradicated. Seriously, anyone visiting Rome should visit here. It has become popular with female clients too as the service is so Wonderful at Wonderfool. 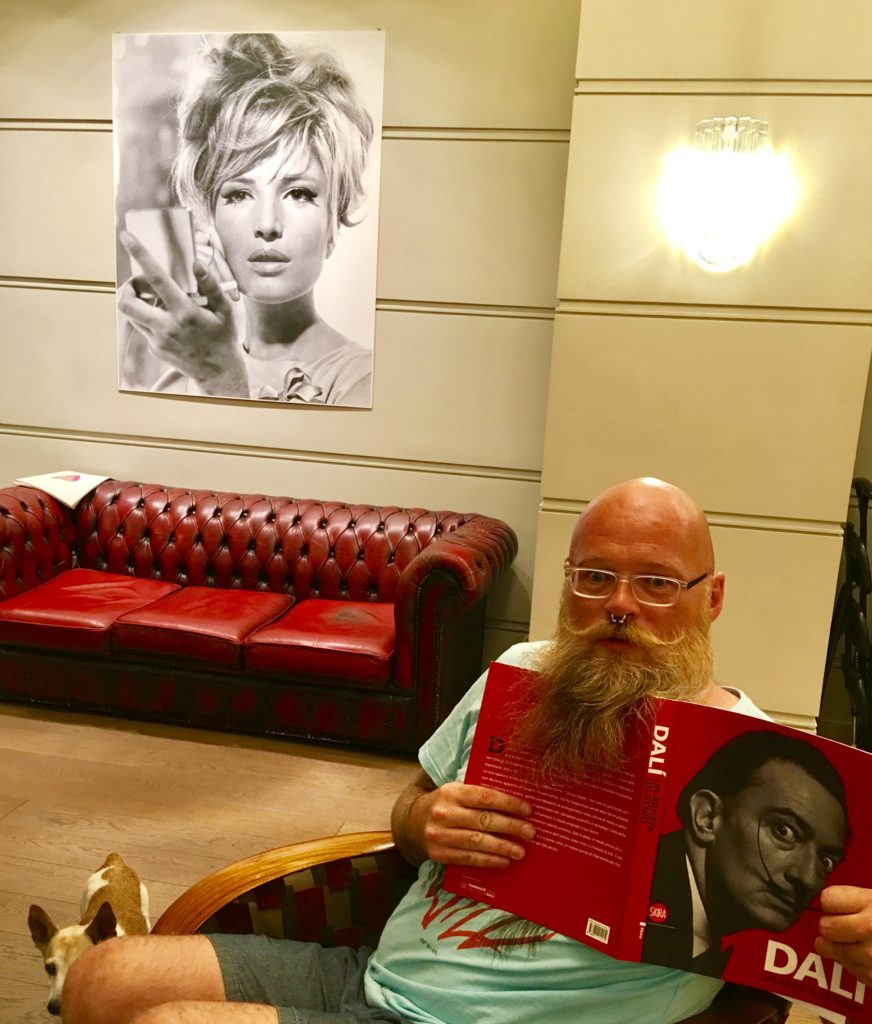 I ate a light dinner of arancini from Mondo Aracini just round the corner from my flat. The Sicilian specialty of risotto rice balls stuffed with spinach or porcini mushrooms and coated in breadcrumbs and deep fried. Mmm I could commit murder for these magic balls of tastiness. 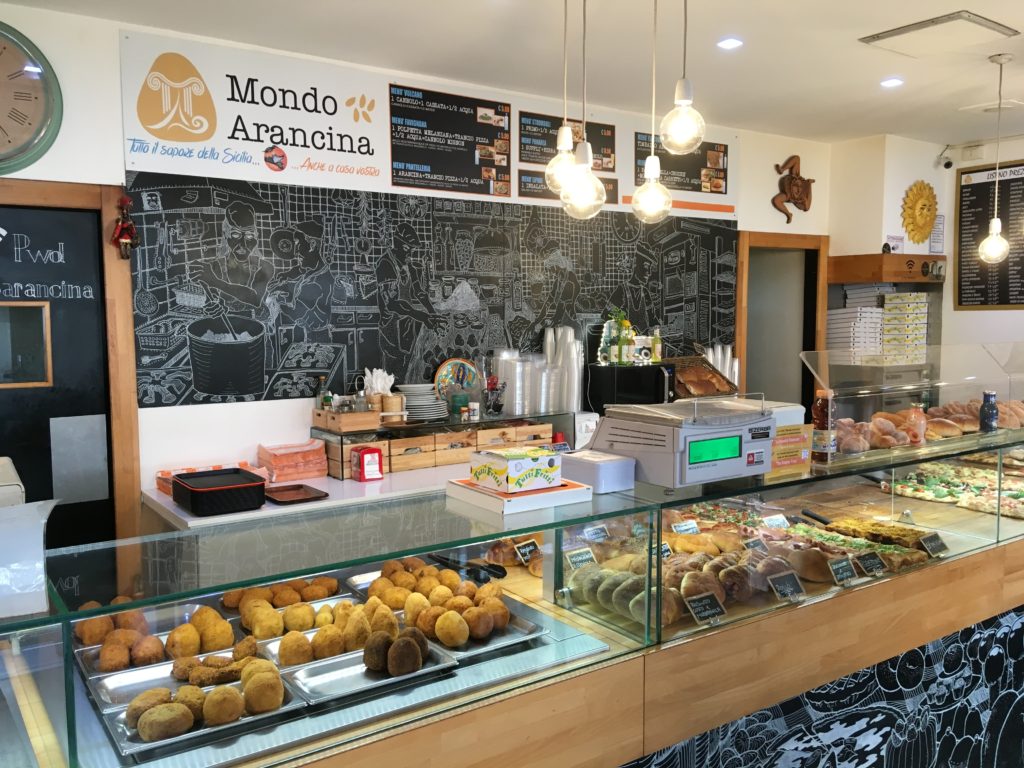 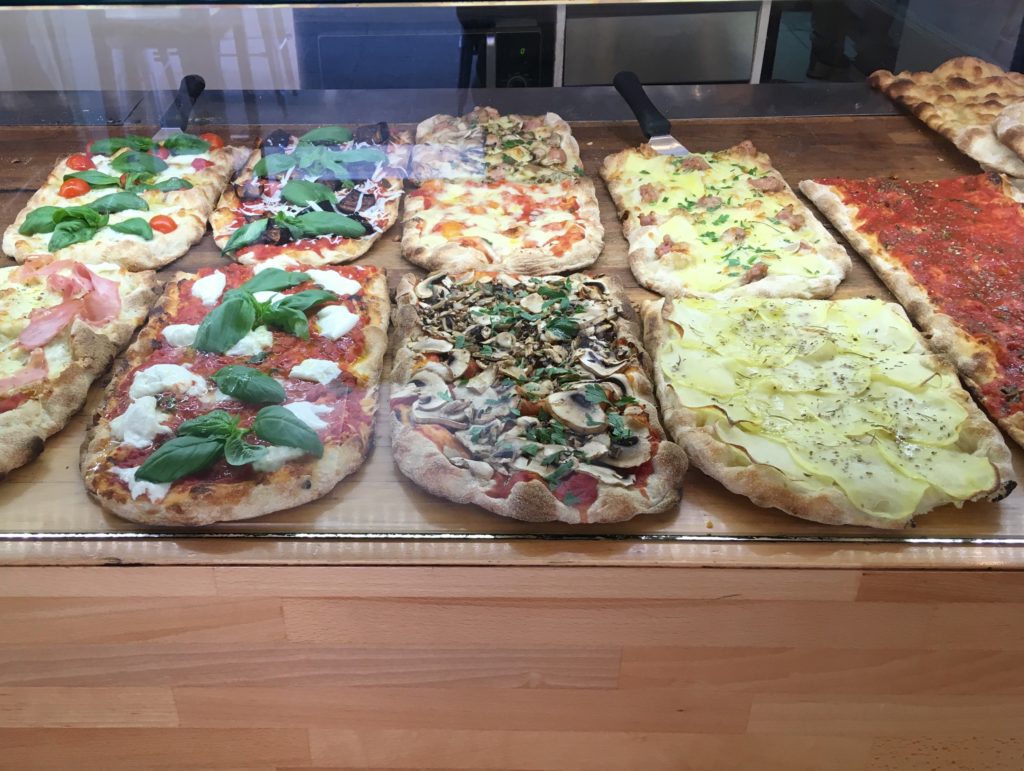 Then I set off to see the thing I was most excited about visiting here. The Trevi Fountain. I was full of apprehension. Since every fountain on my travels so far had been switched off except in Berlin I was so worried that this would be the case here too. Especially after reading that the Pope had switched off fountains during this summer’s drought for the first time ever. Please please please be working. 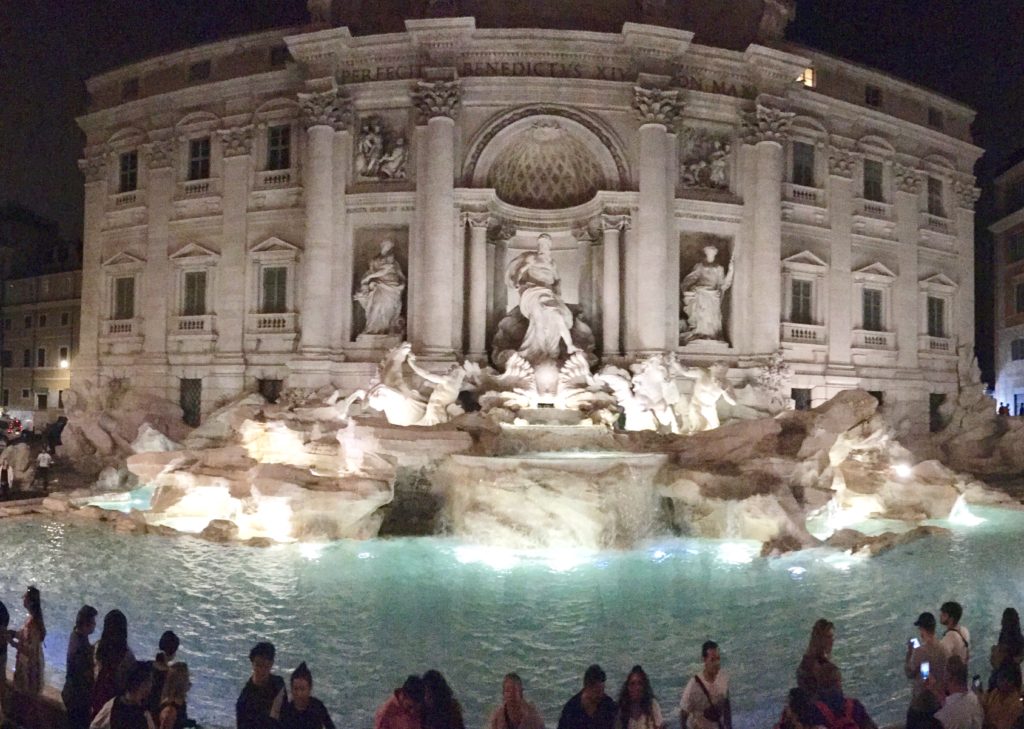 Cue the Respighi and the symphonic poem, the Fountains of Rome. Ok so the third section is the ‘Trevi Fountains at Noon’ and I was there at midnight but they were on. They were illuminated. And they were resplendent. 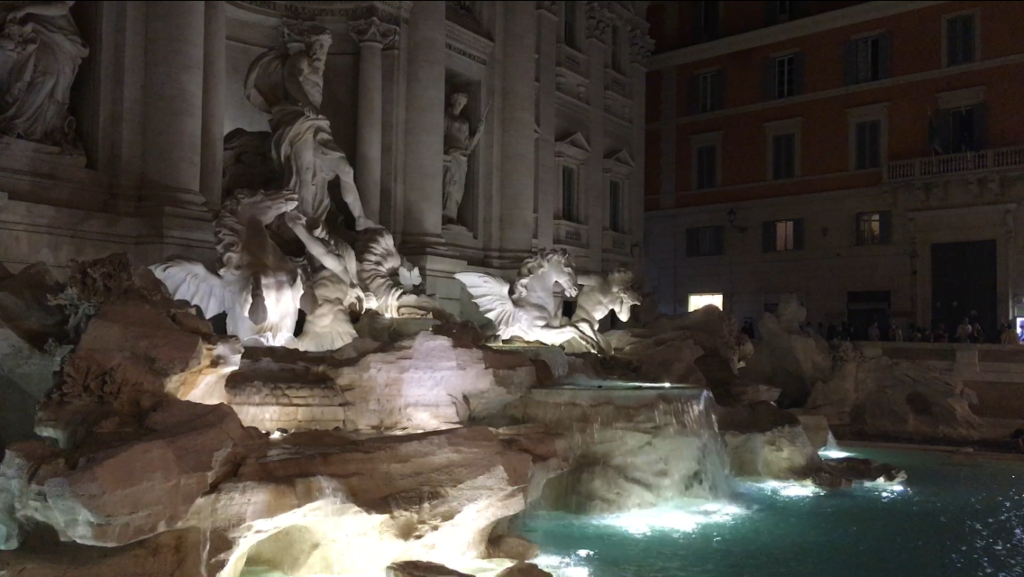 Designed by Nicola Salvi and completed by Pietro Bracci they stand 26 metres high and 49 metres wide and are built where three roads join and at the end of the modern water course, the Acqua Vergine that revived the Aqua Virgo one of the aqueducts that fed water to Ancient Rome. The legend is that with the help of a virgin Roman technicians located a source of pure water 13km from the city and designed an aqueduct to deliver the water to the city as well as the baths of Agrippa. This was in use for 400 years and the old fountain depicted the legend. 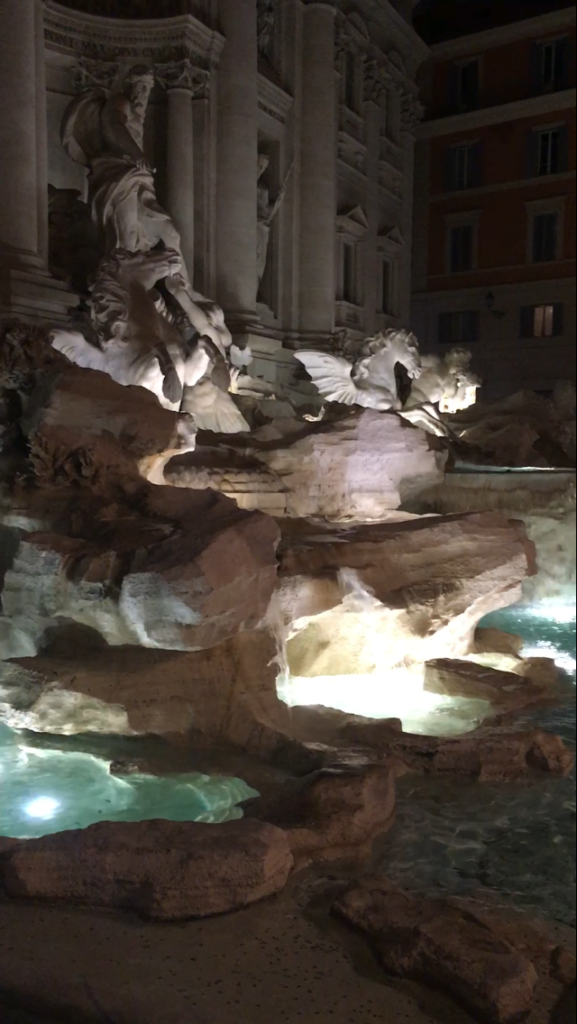 In 1629 Pope Urban VIII decided that the fountain was insufficiently dramatic and so commissioned Gian Lorenzo Bernini to sketch possible renovations. But the pope died. So instead a competition was created and Salvi lost to a Florentine. 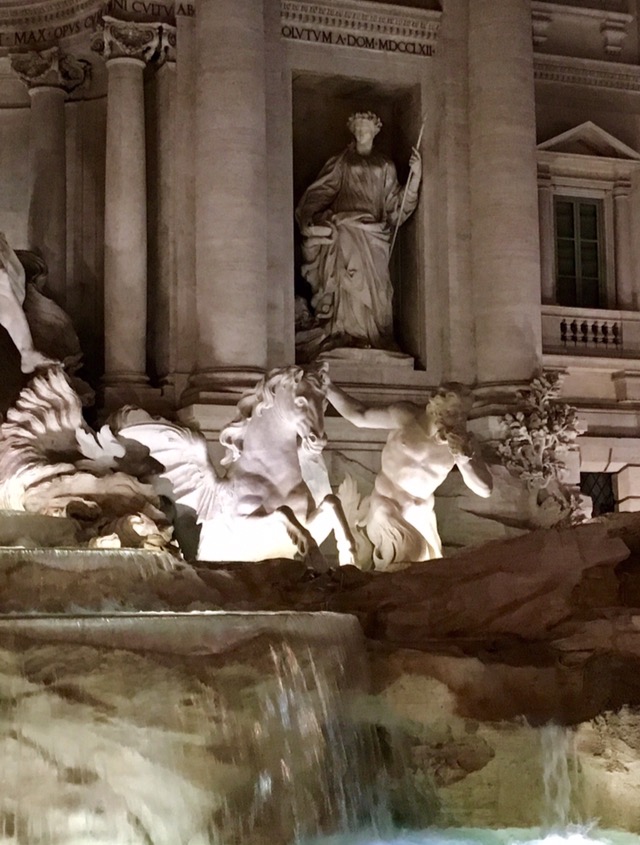 There was a public outcry and Salvi was given the commission instead and began work in 1732. But before he could finish it Salvi also died in 1751 so Giuseppe Pannini took over and the fountain was finished in 1762 when Bracci’s central figure of Oceanus was finally inserted. 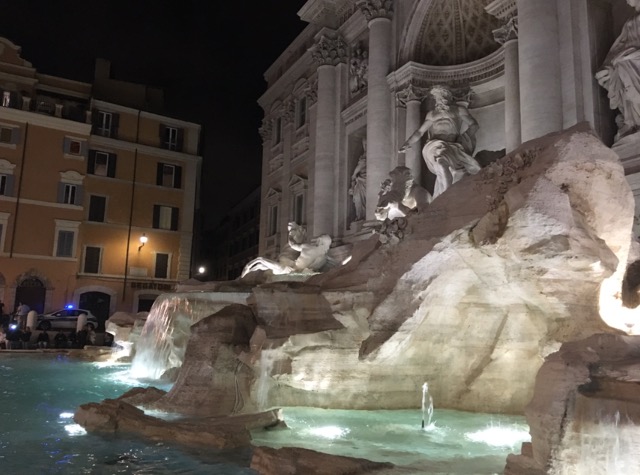 Pannini changed the planned sculptures of Agrippa and the virgin for the allegories Abundance, spilling water from her urn and Salubrity holding a cup from which a snake drinks. 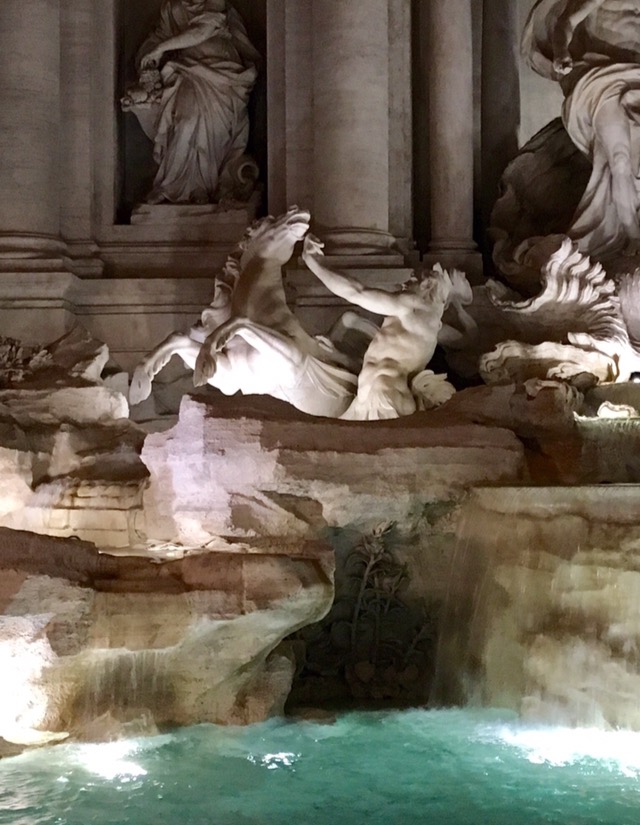 The tritons and horses are there to add drama and symmetrical balance. The tradition of throwing coins into the fountain has allowed the subsidising a supermarket for the needy but was not something I could do. I worry about damage to the fountain. It is so marvellously special. I love a fountain and I really loved the Trevi. I had to do the Trevi dance. Check out my Instagram feed for it. Sorry for the blurry photos. It was at night and it was still crowded and it’s just my phone I’m using. But if you want to see it clearer… book a weekend break here.

There are so many more fountains all over Rome not just meagre trickles, big sculptural buggers by Baroque and Rococo big wigs. 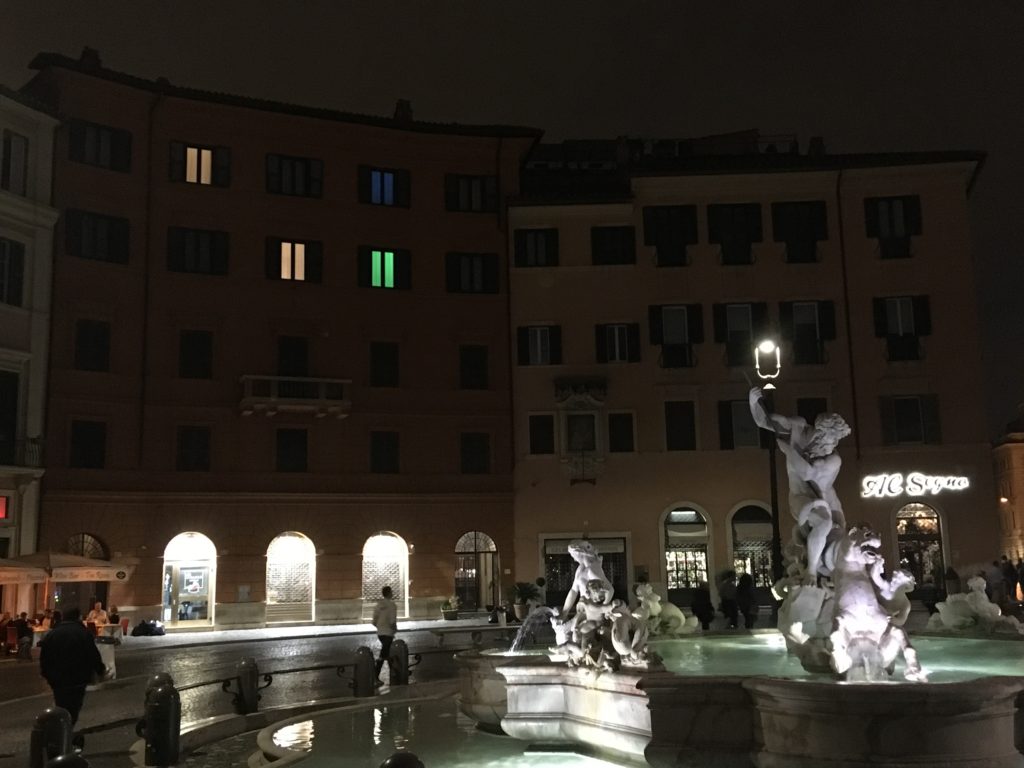 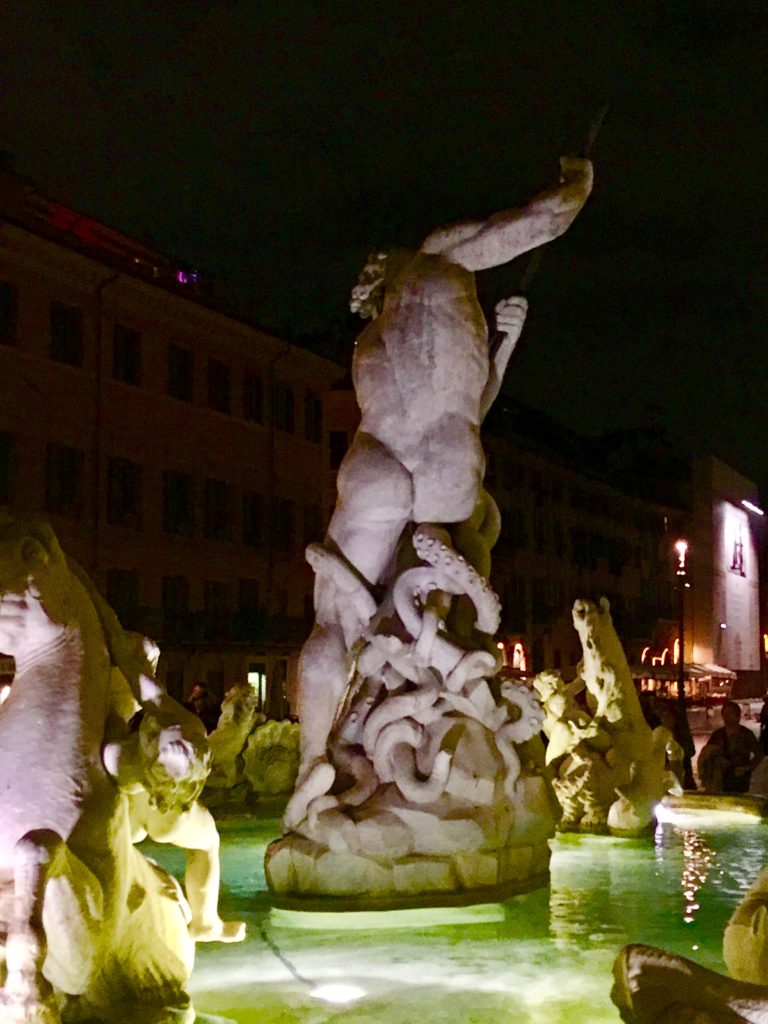 Mind where you stick that octopus arm!

One fountain by Bernini, Fontana dei Quattro Fiumi depicts four great rivers in human form. It was being restored and cleaned when I visited so no water was gushing around the figures. 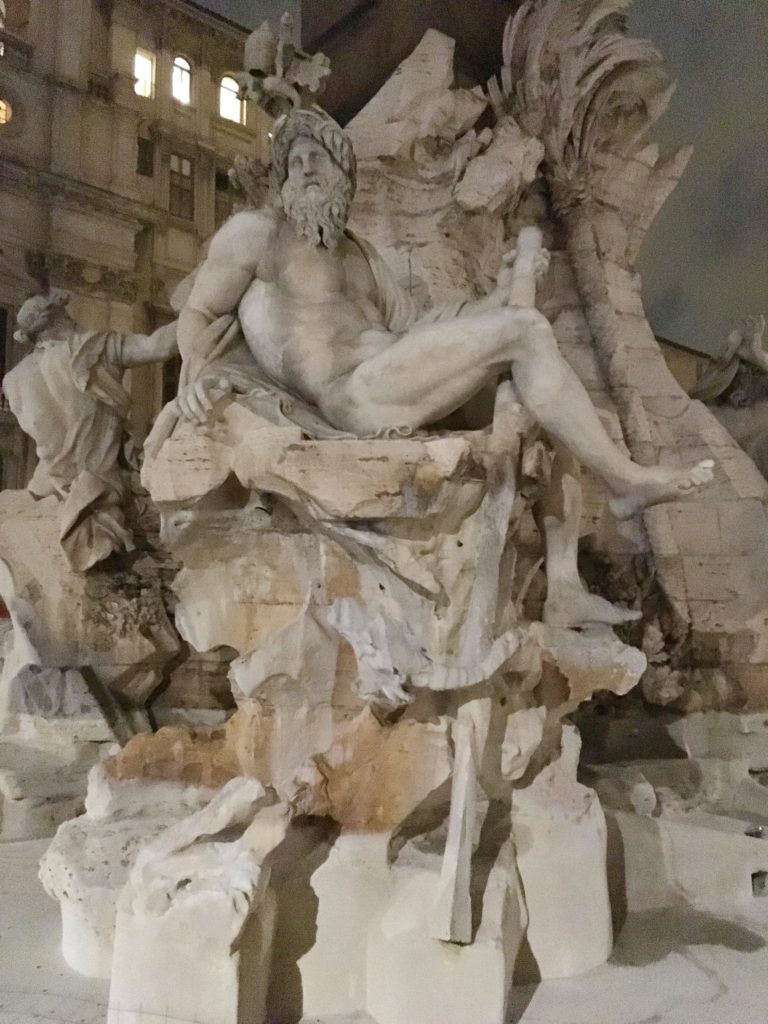 The god of the Rio de la Plata River shields his face from the vile and overly ornate Rococo facade of the church of Sant’Agnese built by Bernini’s arch rival but the fountain was completed quite a few years before Borromini began work on the church, but myth is stronger than the truth sometimes.

Sometimes it’s just fun to pretend to be the sculptures around the fountain. Here’s me being silly at the Fountain of the Naiads in Piazza della Repubblica. 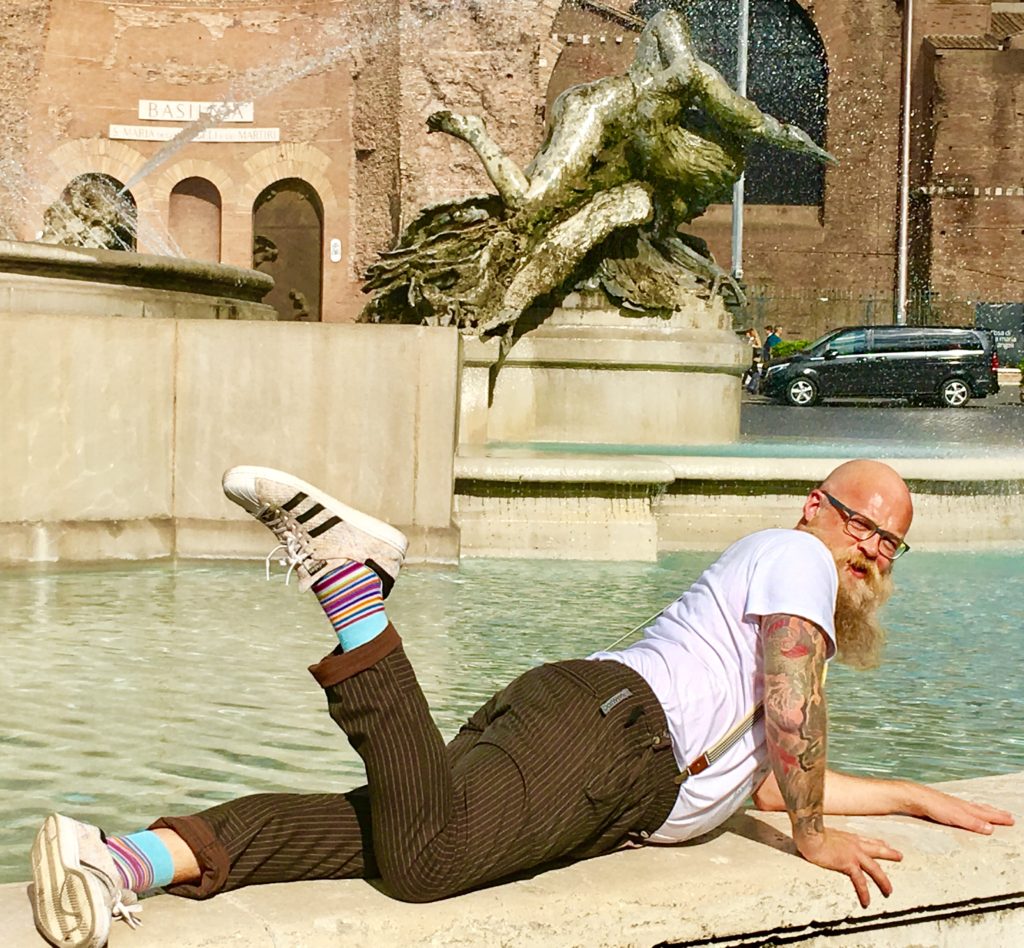 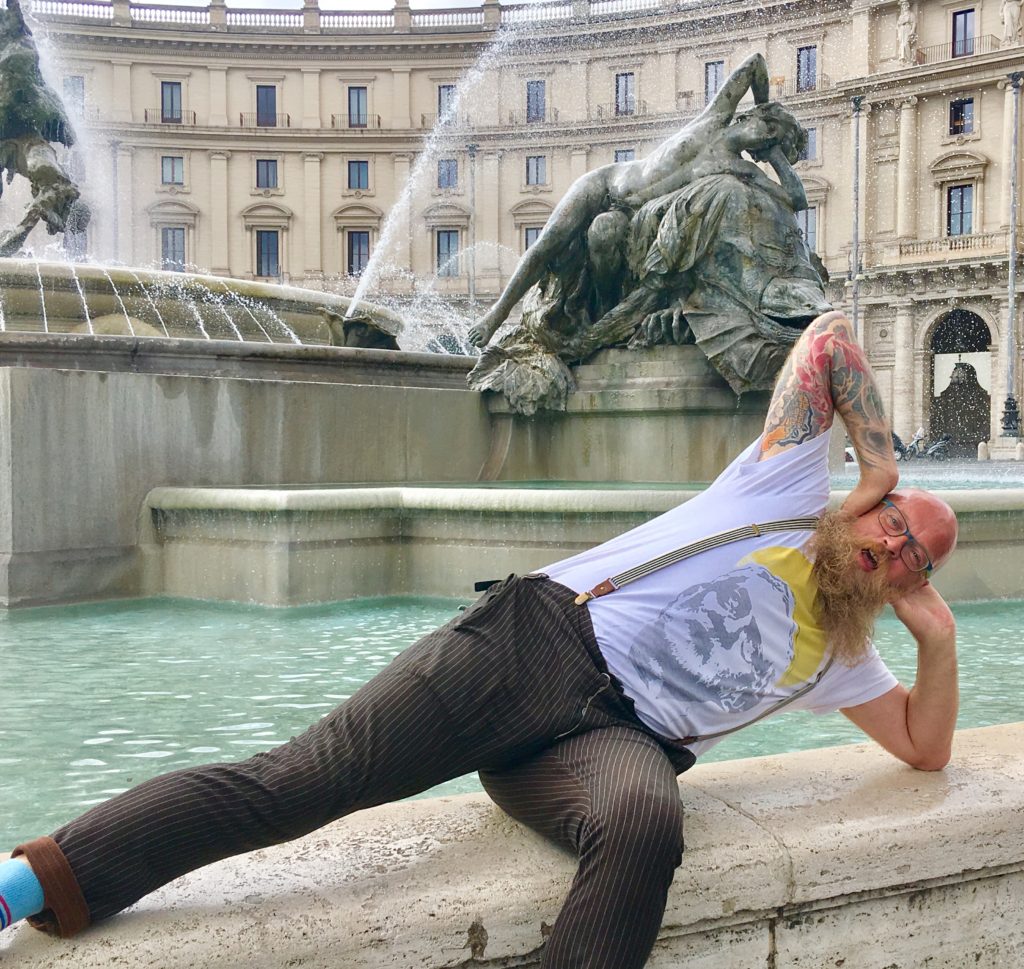 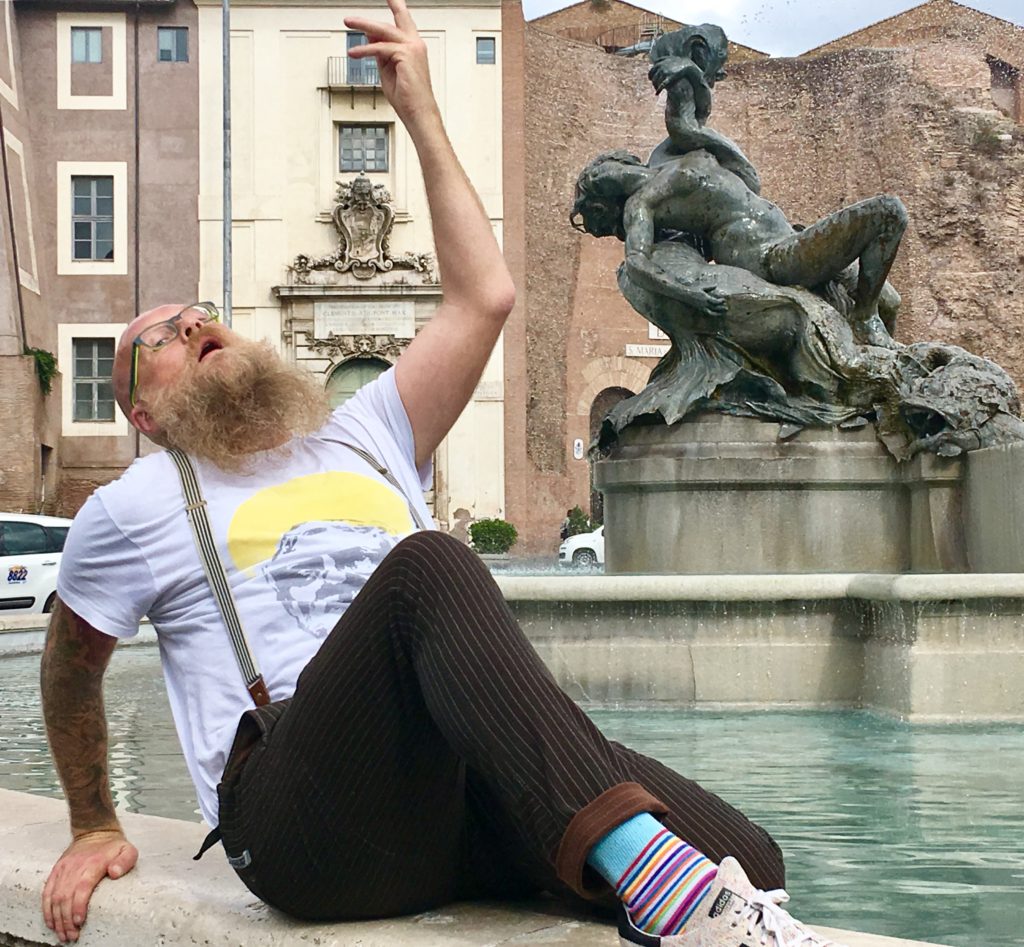 I just read about a group of drunk British architects who were fined for cavorting in the fountain so I would advise caution when being silly round public monuments.