What do you get when an effete flute playing poofter becomes king of all Prussia? Exquisite palaces and the flourishing of the Age of Enlightenment. Go Friedrich.

So your dad’s the soldier King who suffers with bouts of porphyria making him aggressive and unhinged. You play the flute and adore the arts. Dad wants you to have the education of a French peasant. You buy a secret library of 3000 poetry books. You fall in love with a guy in your maths class. Decide to run away to Britain to live with your uncle, the British King and your dad finds out and makes you watch as he beheads your lover. Ah Prussia. 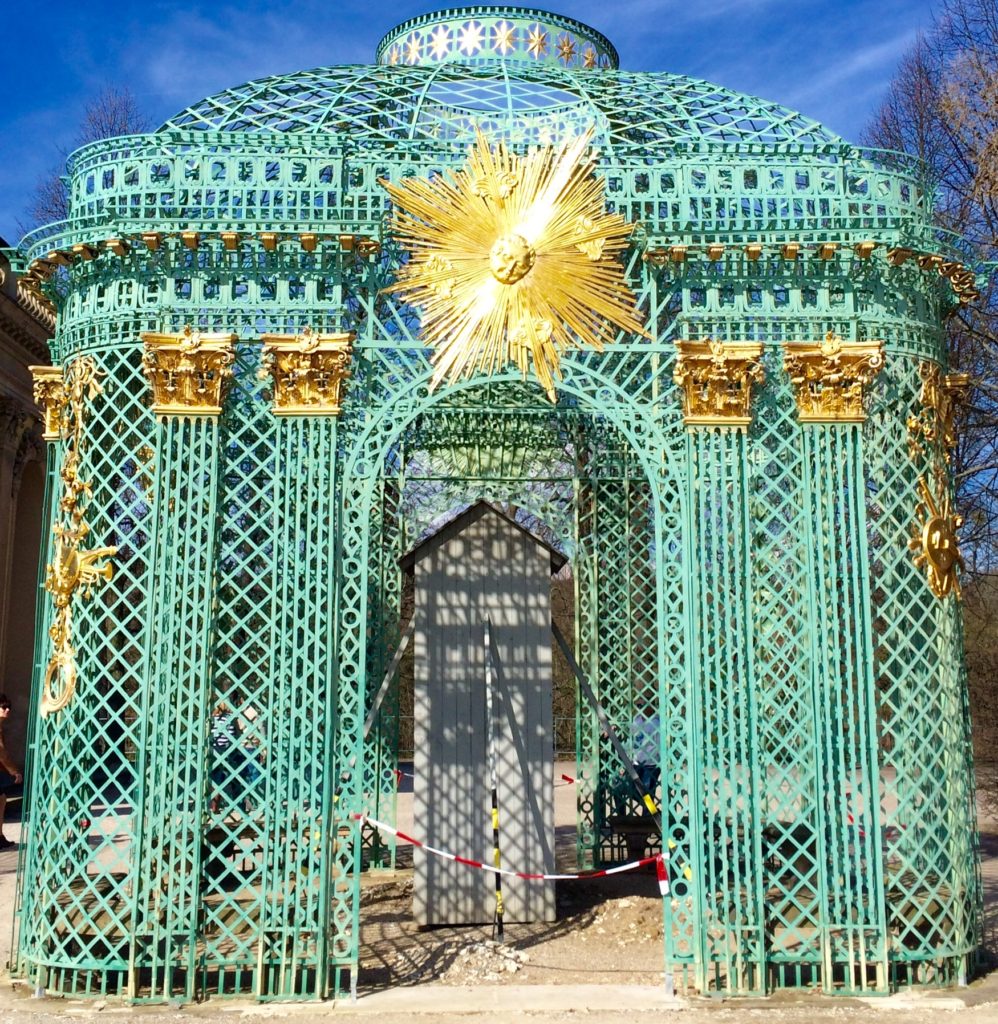 If you’ve hundreds of statues then some will need grand elaborate homes.

A Mrs Trellis of North Wales wrote to say “Dear Mr Titchmarsh, never let them tell you that size isn’t important. My bachelor son told me that after he erected a rotunda in his back alley.”

I went before the protective boxes were removed. I’ve no idea of the splendour beneath but it at least means I’ll return to see Sanssouci soon. 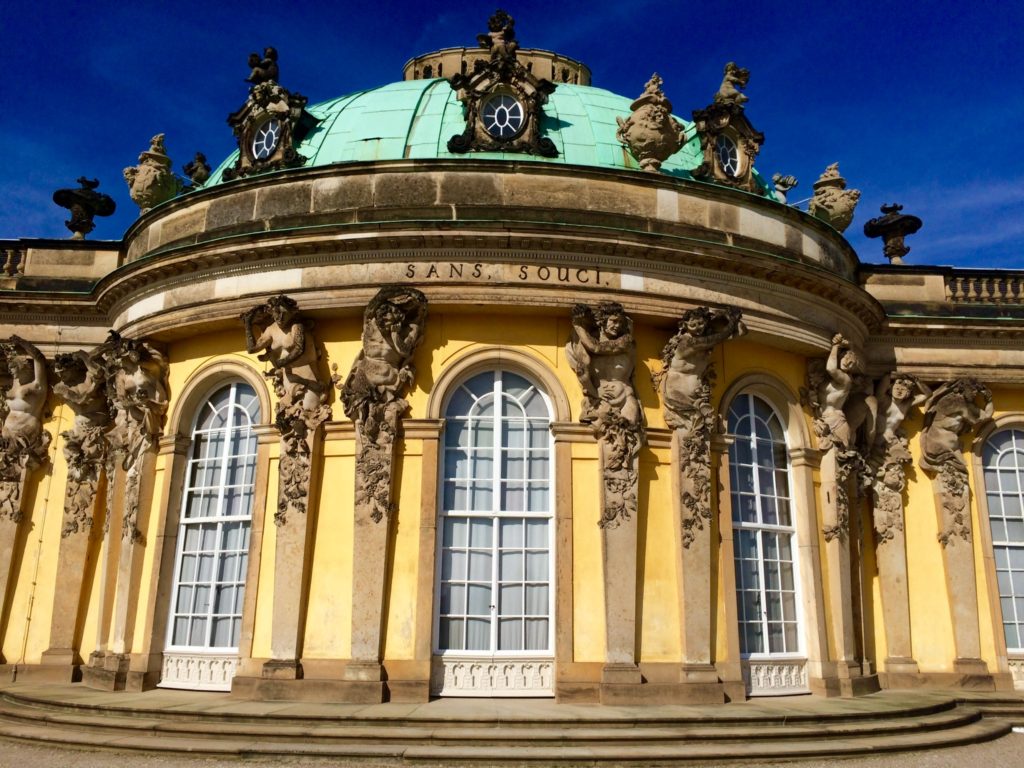 Everyone needs a place to party so why not build a palace and call it Sanssourci, No Sorrows. Friedrich went on to become one of the most impressive leaders and led his troops himself into many campaigns. I’m pretty sure losing your lover would make you less scared to face death in battle. It is said that he never spoke about the tragedy again. With that trauma he was quite likely a cold, bold and fearless General to fear.

Sweeping up to the palace are banks of gated rose bushes. Not yet in flower but it allowed us to see the construction that supports the summer’s sea of flora. 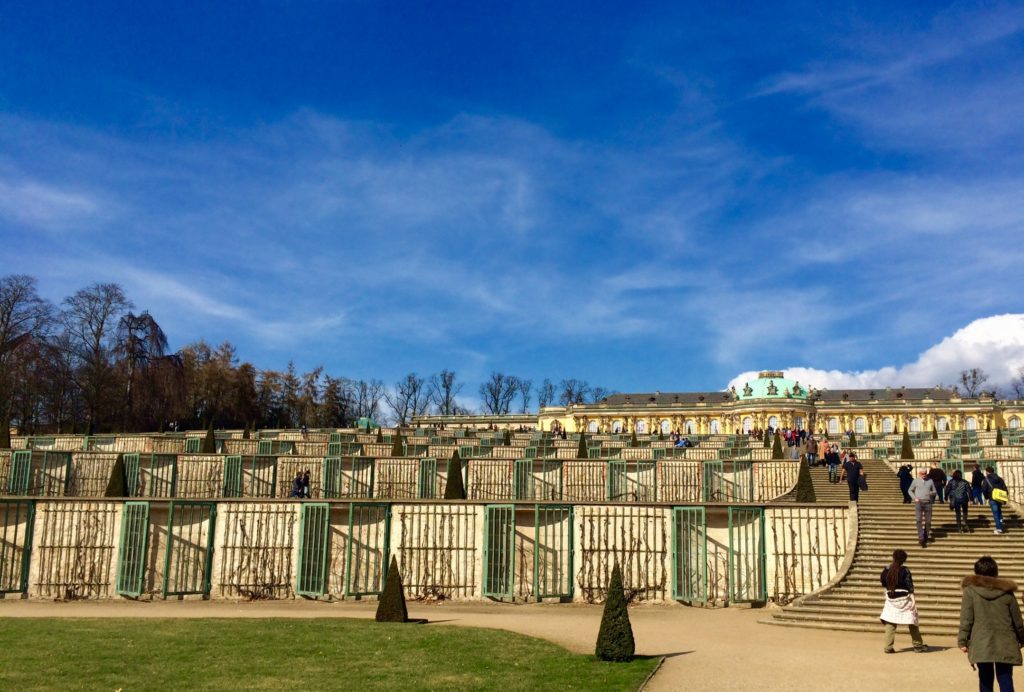 The gardens are full of places for pleasure and regiments of statues. Lamps, fountains, gardens, churches, even a golden Chinese tea house and pretend farms for your wife, Elisabeth Christine, who though I’m sure you adored you never slept with. On his father’s death he became king and separated from Elisabeth Christine. Gays with cash eh?

Angels with trumpets are everywhere too. Trumpets are more military than flutes and fifes are for boy soldiers. The sheer number of statues is mad but also the ones of men together or the largish genitals. Not very Greek! The cocks not the homoeroticism. Though they often go hand in hand. 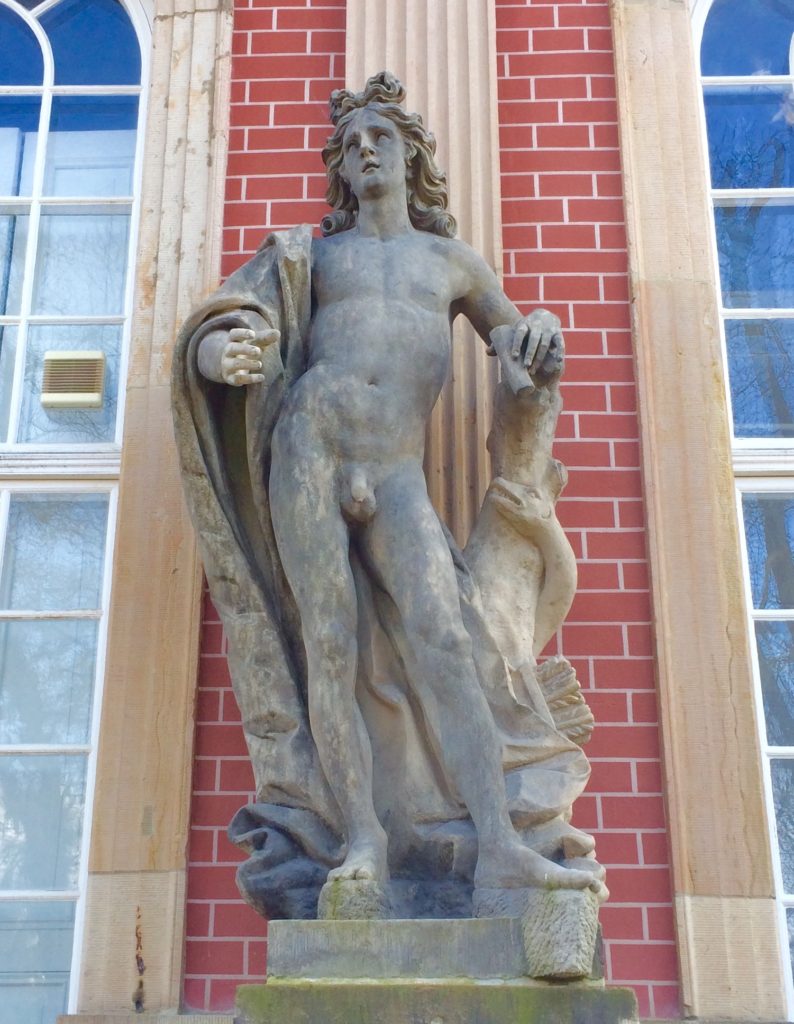 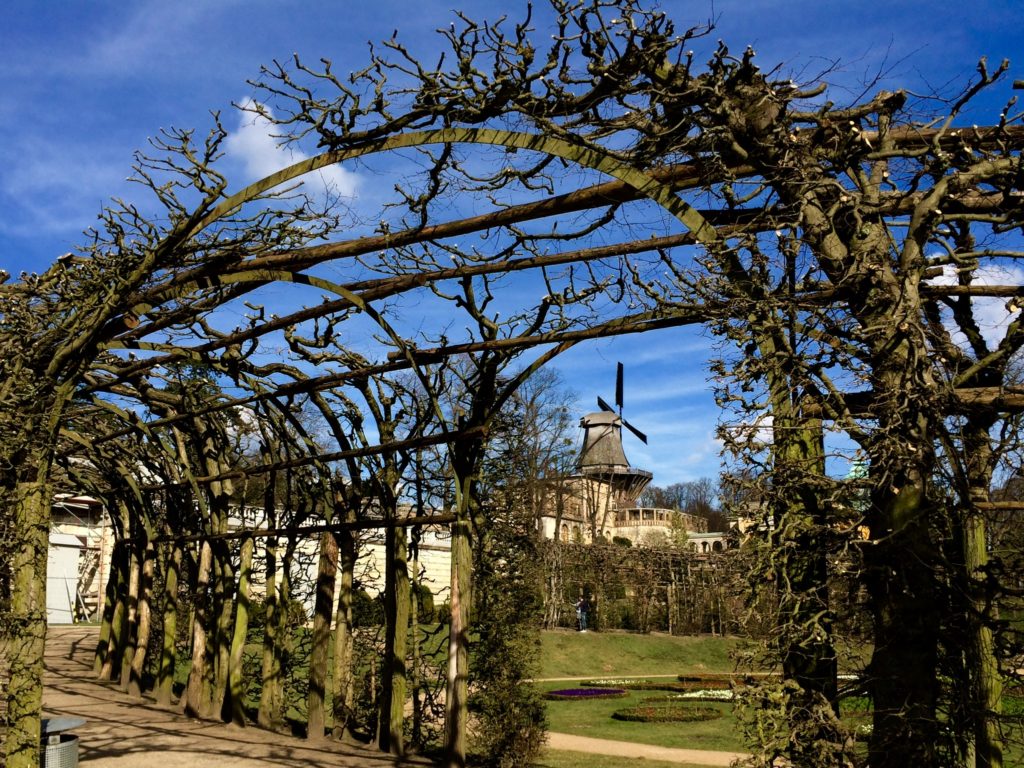 Everywhere you walk the avenues lead the eye to vistas of pure pleasure. From the rear of Sanssourci there is on the horizon in the far distance a totally fake fallen Greek ruin. Maybe this is the origin of that wonderful German word that describes the joy felt when looking at such a ruin – Ruinenlust. 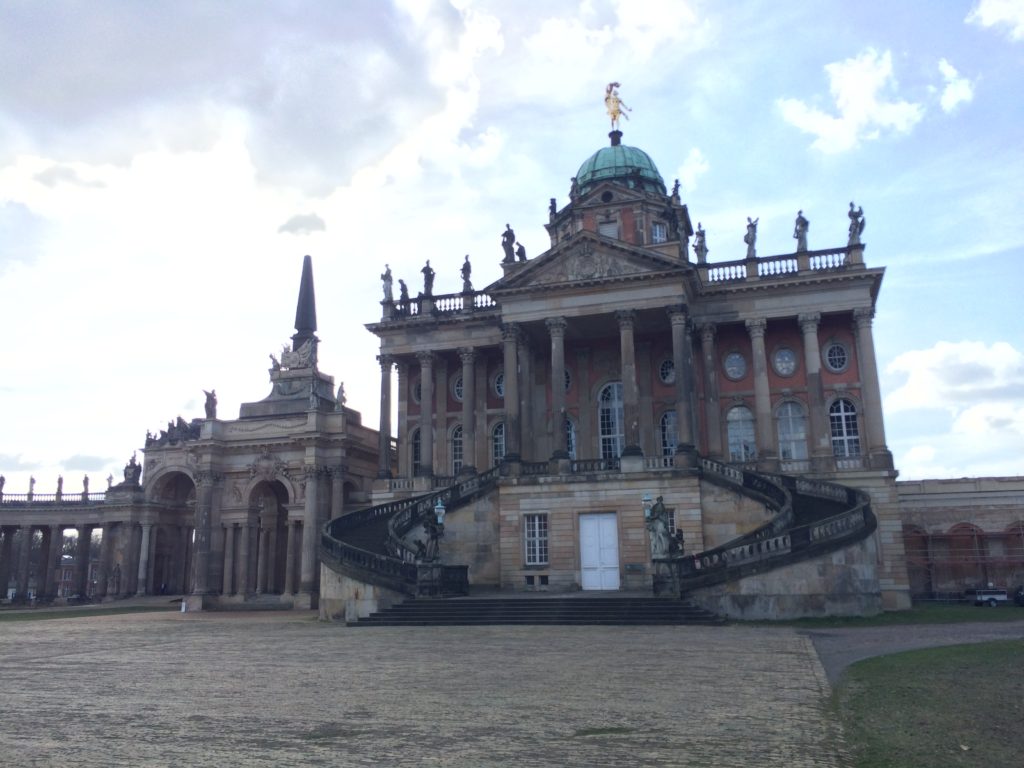 This symmetrical palace is mirrored by an identical palace to the left. Just two of many palaces. All are massive and ornate. Oh Potsdam how I’ve wanted to visit since first hearing Das Berliner Requiem by Kurt Weill and Bertold Brecht. I’ve had ‘Zu Potsdam’ in my head for days. Can I recommend listening to it on head phones as you walk about. It’s much better than singing it out loud all day. Must find a new ear worm.

The other Brandenburg gate 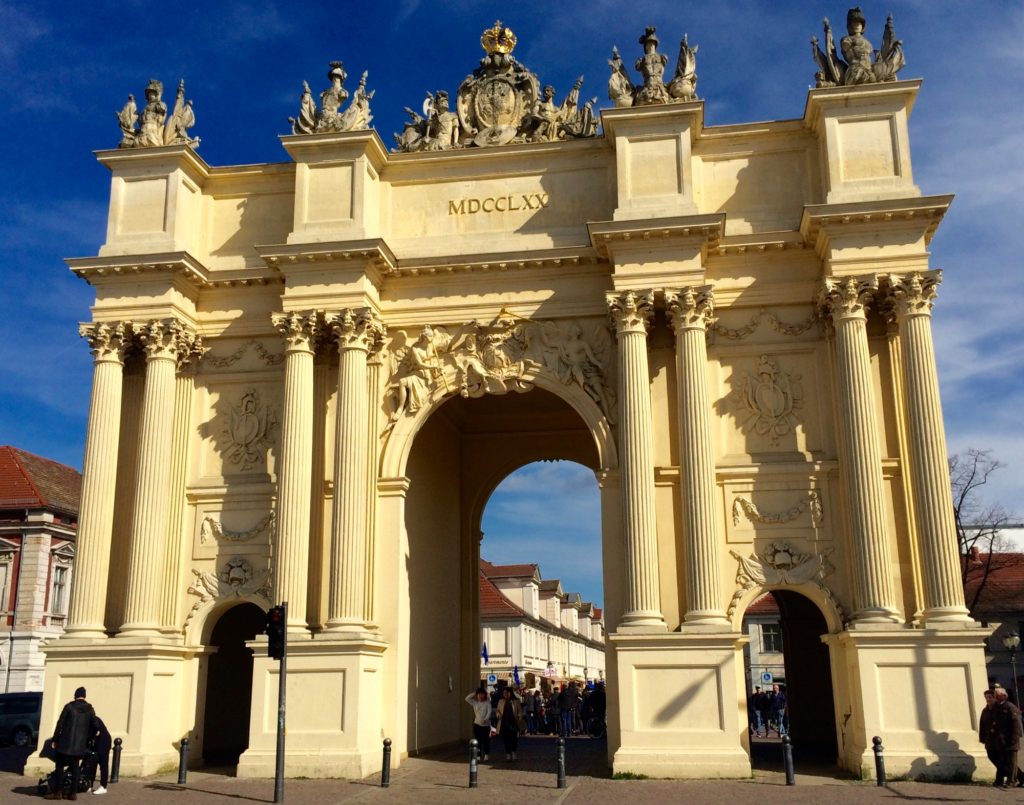 And so at last I understand my confusion when looking at maps of Berlin. There are two Brandenburg Gates. This is smaller Brandenburg Gate and on the edge of Potsdam town just before the palace gardens. There are gates everywhere. One, the Grünes Gitter is famously light green and consequently the town seems to become a bit over eager to use the colour on windows, fences,  buildings, lamps, and most static civic objects. I’ve named it Potsdam green and it goes exceedingly well with Prussian blue. 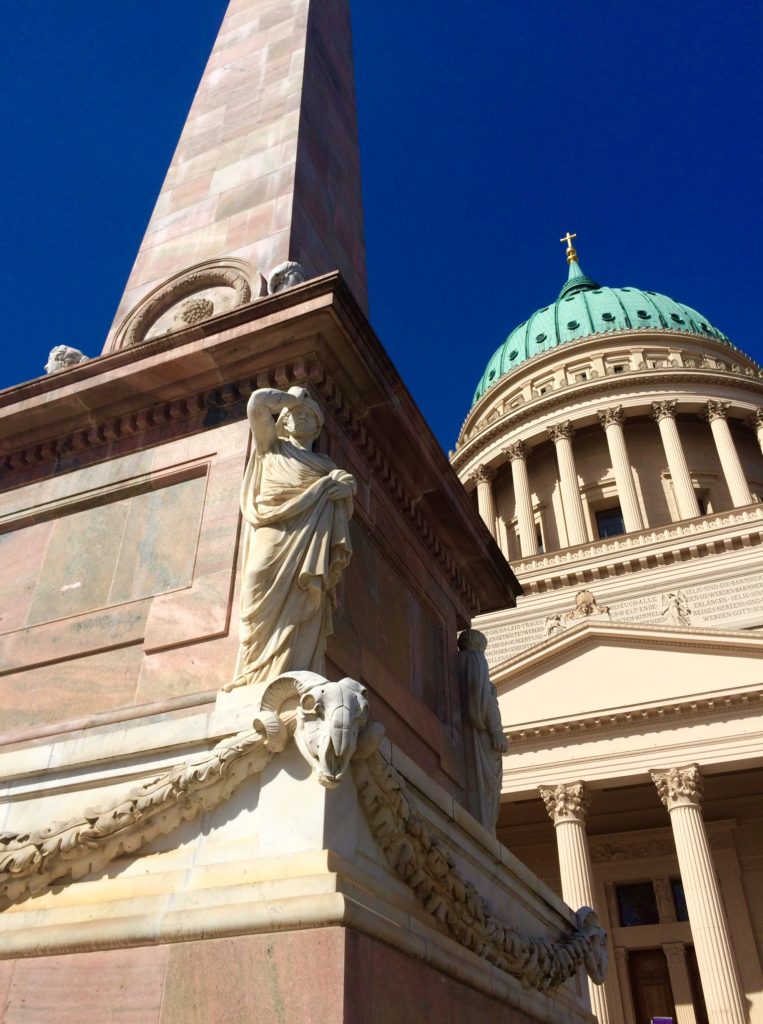 Friedrich’s grandmother was Sophia Charlotte of Hanover and there is a district here called Charlottesberg. This could easily have been the name of Berlin. But as we know it didn’t work out for Charlotte. Ah well. That’s Berlin.

One of the last major squats still in Potsdam. Painted on the door is a note to the police saying instead of breaking the door down if they just knocked residents would willingly let them in! Nothing to hide. 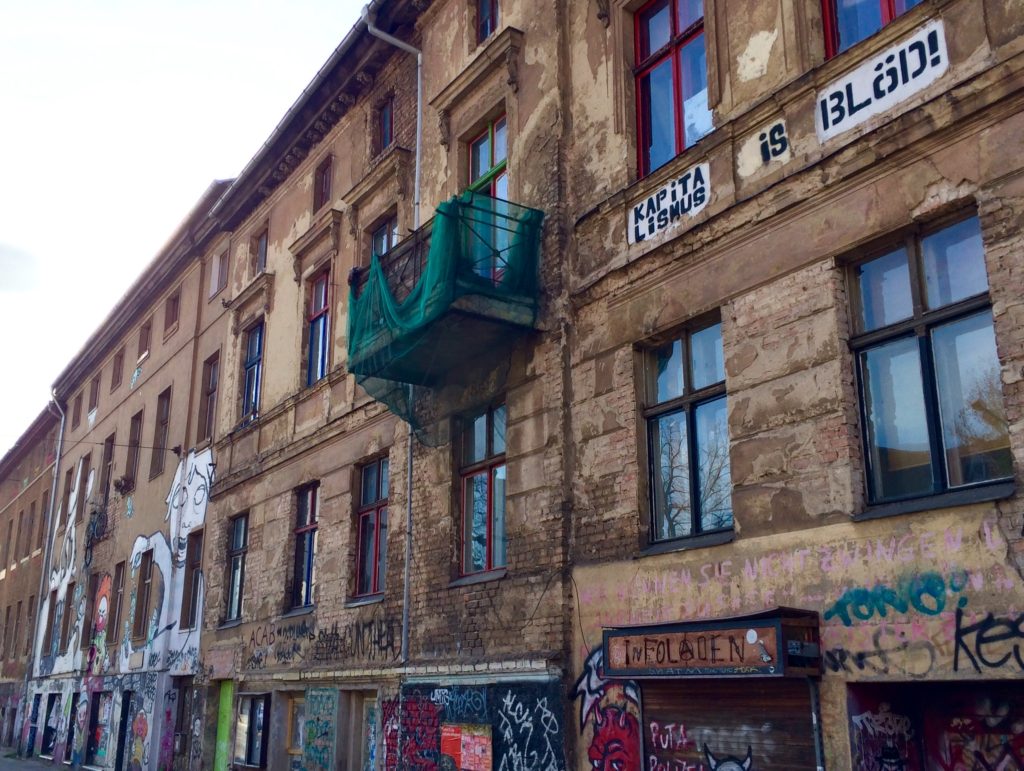