Thanks to a rather unique geological climate while most of Perú experiences a wide variety of weather Lima suffers from a condition featuring a mostly perpetual greyish white sky. Known locally as the ‘panza de burro’ or ‘belly of the donkey’ unbroken dullness is often complicated further by seasonal mists and fogs that roll in and forget to roll out. Lima only has two seasons – summer and winter and when winter is finally kicked aside so too is the donkey’s belly and the locals go beach crazy and surfing is a must. They say surfing began here in Perú with fishermen on reed-tied boats riding the waves but that was long before tinned fish and brand names that seem unfortunately funny. 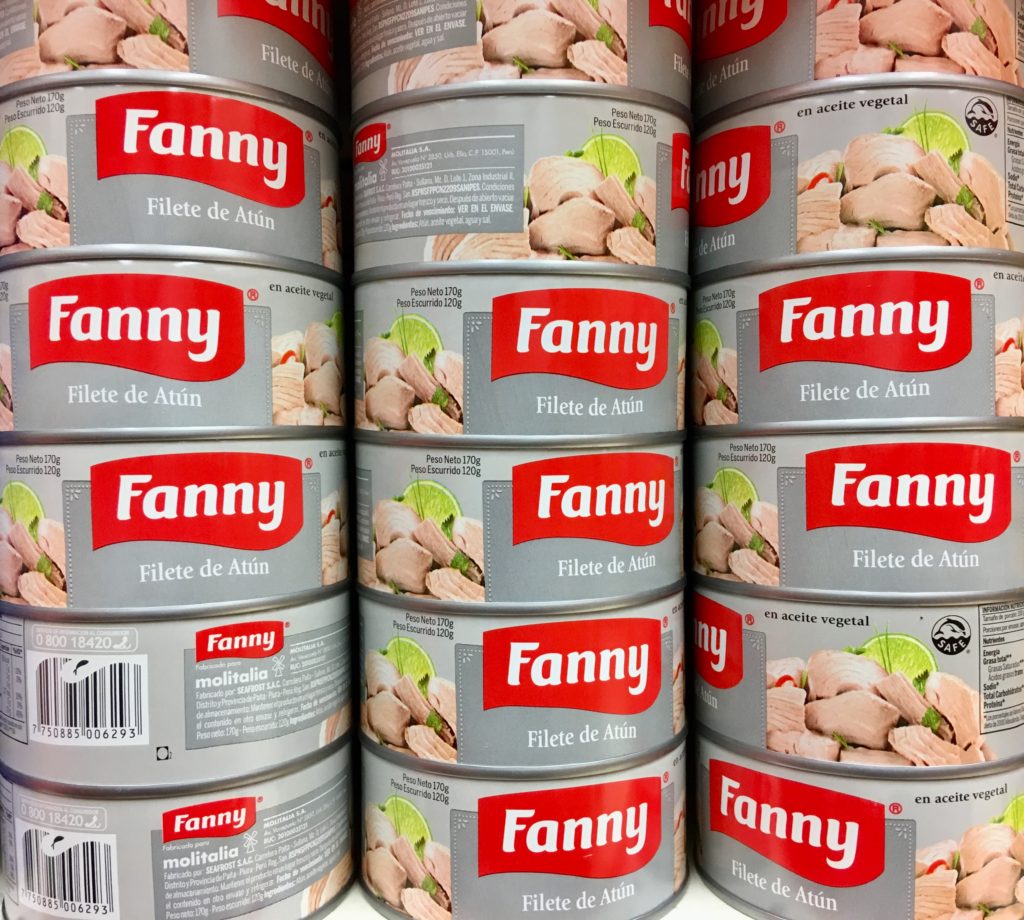 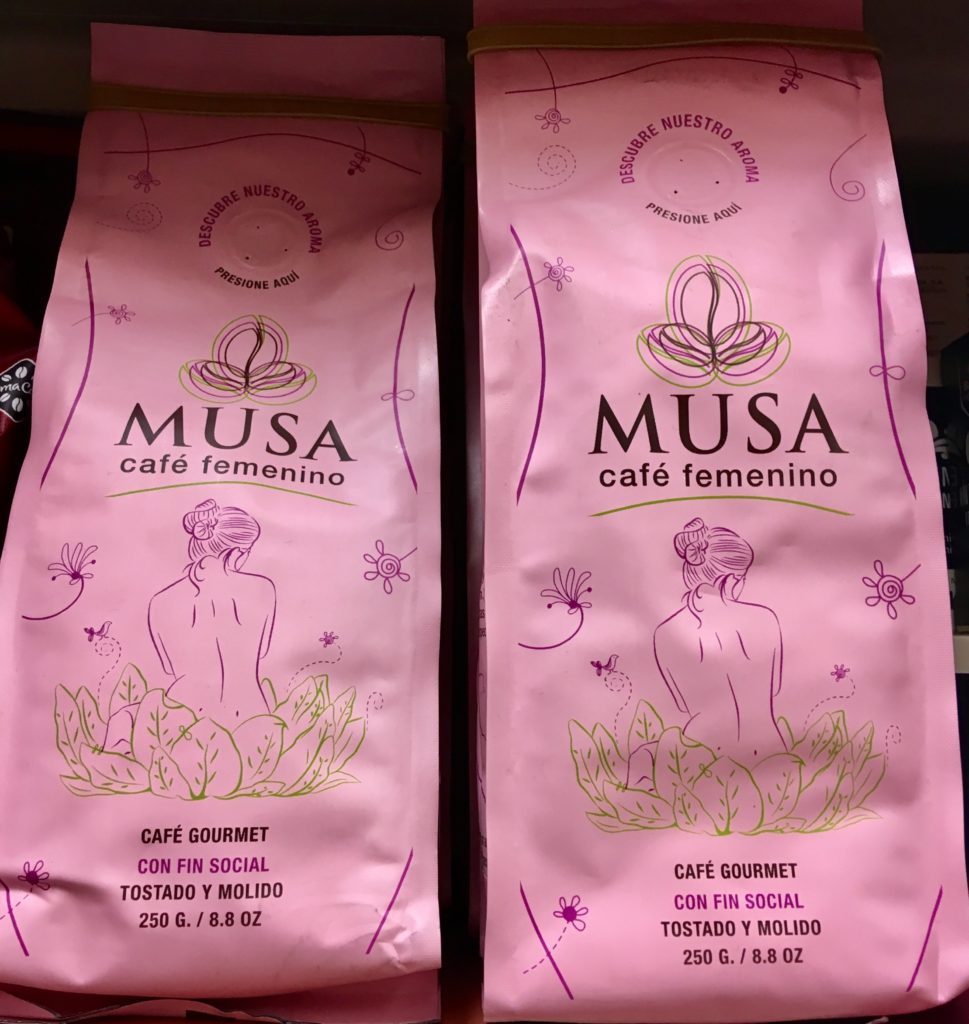 I do love a supermarket but most of all I love an overseas one. With all their alternative branding of familiar items. Here in Perú the items themselves are also totally unique. Fruits and vegetables that would go down a storm in the UK just aren’t being exported. Yet especially important to the UK industry ought to be the potato as we love them. Perú is after all the birthplace of the potato and they have so many varieties we would love but more importantly Lima is the home of the Potato Institute. I am still hoping to visit it. 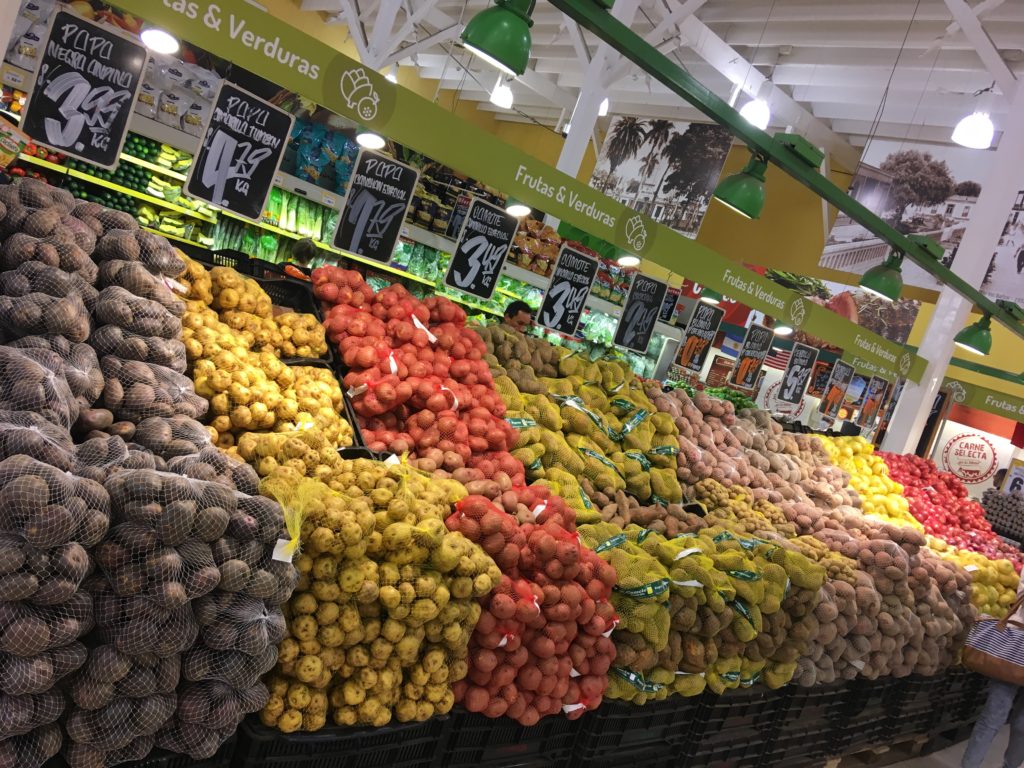 A favorite tuber related to the potato here is the ollucos which has a waxy texture reminiscent of beetroot. 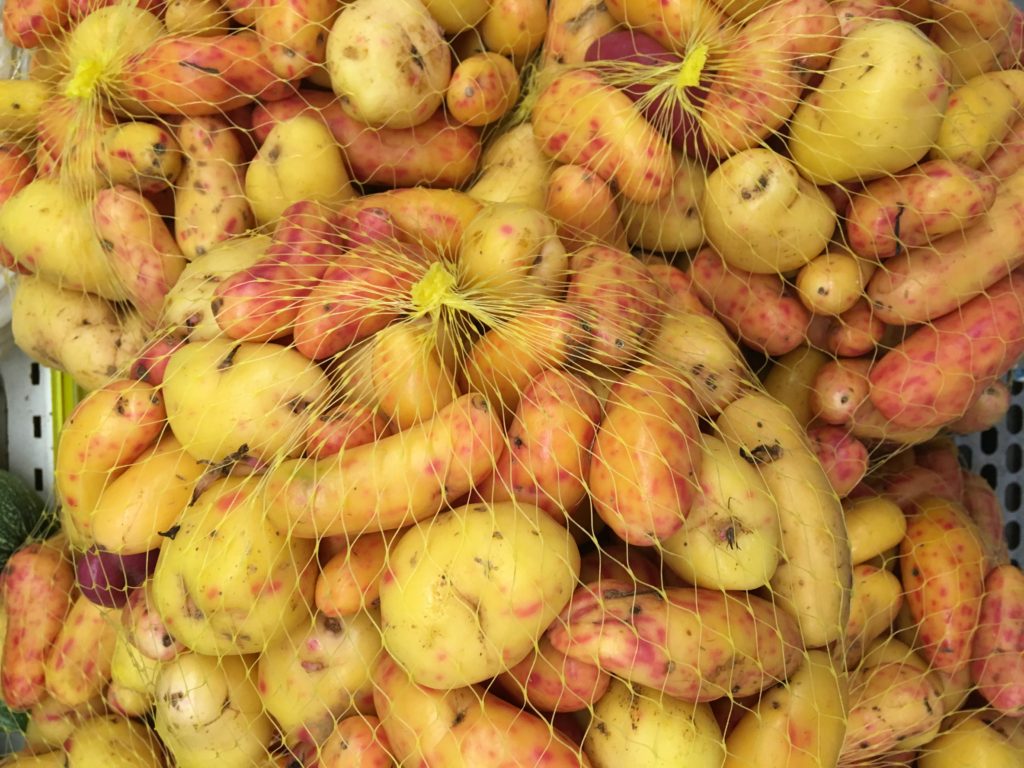 There is also the very popular yellow sandy textured potato called the yellow potato but in Spanish obviously. Then there’s the yellow and pink tinged one called Papas Nativas, or Nativity Potato like a swaddled baby Jesus. I fib, it means native potato but you can work religion into everything here if you just apply some creative thinking. There are around 3800 different potatoes in Perú I’m told but until I can gain access to that Institute I cannot confirm this. 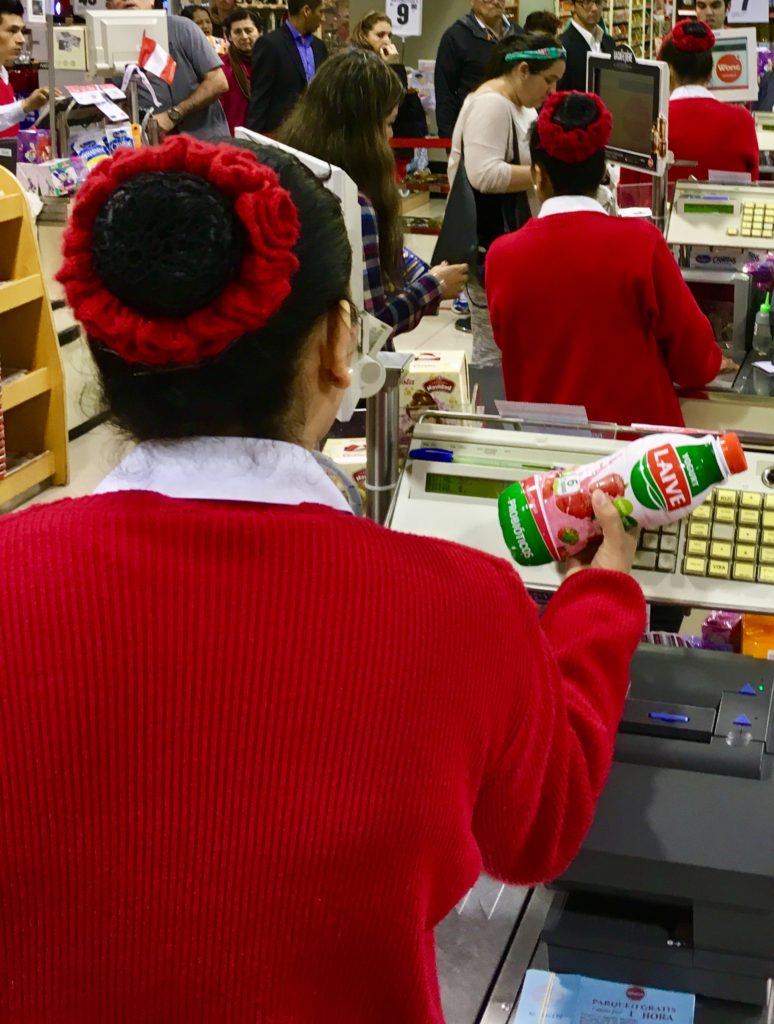 One of the big chains of supermarket here is Wong that started out as a chain owned by a Chinese family that’s since been sold to a Chilean group. In the branches the men wear easy to slip-on hats whereas the women have to spend hours everyday setting their hair into neat buns that they then crown with a ring of red fluff. Female supervisors wear grey fluff and have different collars on their shirts too. I’m not saying I find that a little sexist but I do. 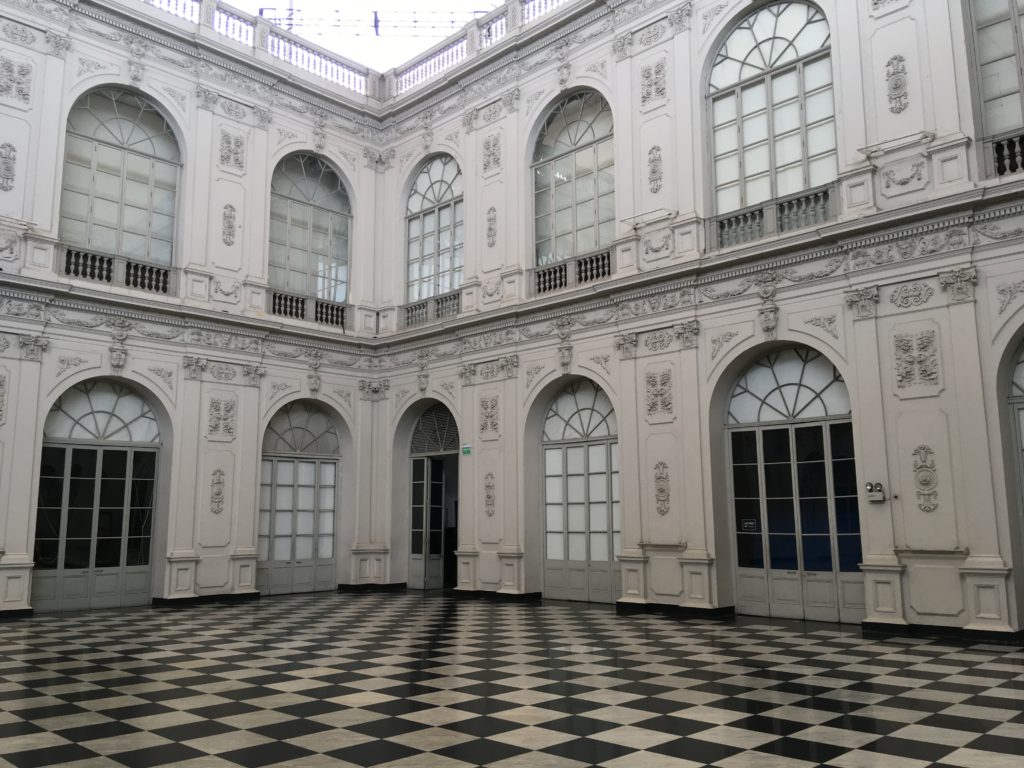 Back again to that ole chestnut, religion. While visiting the Museo Mali to see more pre-Columbian artefacts especially the wonderfully preserved textiles I enter a surprising Colonial gallery where Jesus is depicted in many odd ways. Well to my eyes they seem strange. 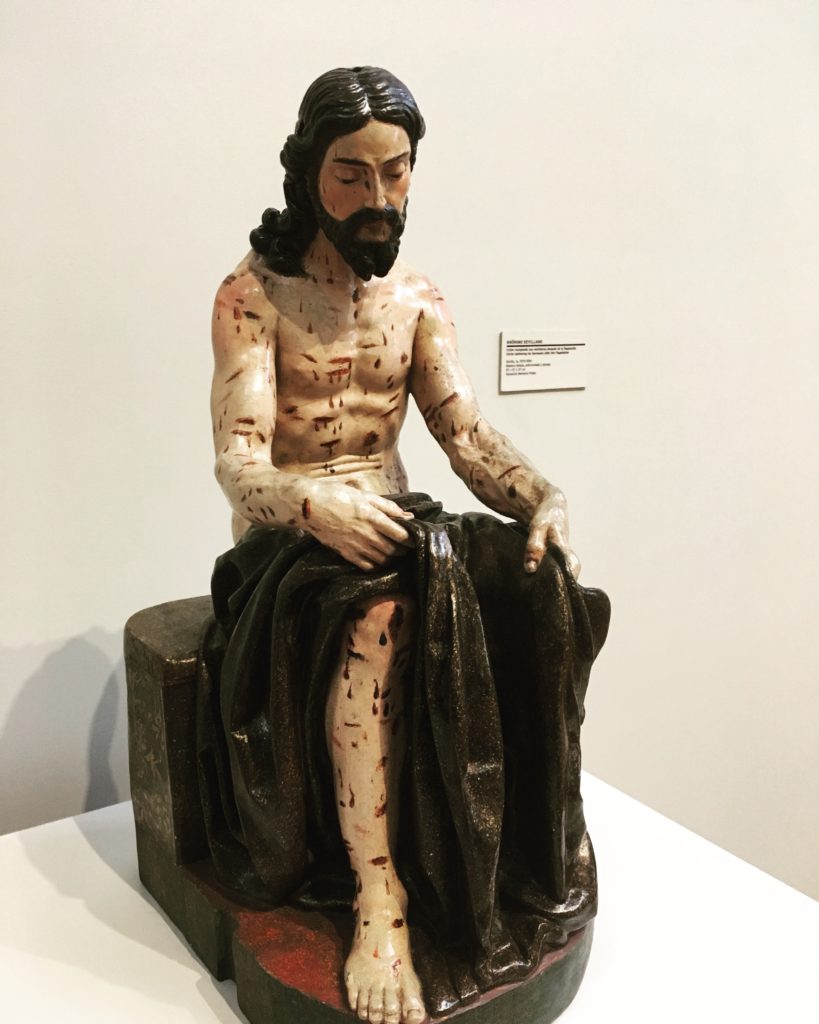 I especially liked this statue of Christ lifting his robes to show all the whipping scars on his body.  It’s known as the gathering of the garments. Now at first I think this very old school catholic. Europe has had a long tradition of self harm as a religious rite but seeing a display case full of bejewelled whip handles made me wonder if it was also a symbol of colonial dominance. 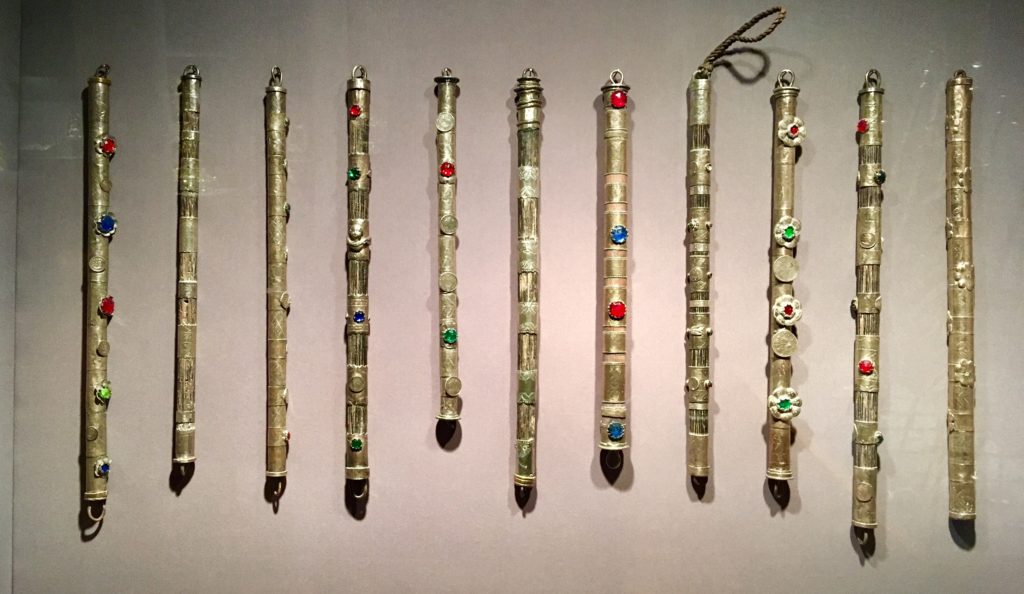 How else do you impose your belief system on those you have conquered? Yet an earlier artefact section shows that ceremonial whips were used by many ancient cultures in their costumed dance traditions. How wrong was my initial assumption!

Olga took me to a gallery where a friend of hers has an exhibition in a side room but the main space was religious art where I was introduced to this concept of triangle Trinity Mary. A very uniquely colonial Peruvian way of depicting the Virgin Mary and very common here.

It speaks of the Andes and the triangular mountains all over Perú. The rigid three sided shape that also echoes the Trinity becomes so very stiff that it’s almost two dimensional. Some statues of Mary were also dressed in similar robes and some paintings were given real jewellery to ornament them and add back some of the lost 3D elements of the art. There were so many Marys like this on display here that we were taken aback at first when we beheld the transgender Mary with a beard. 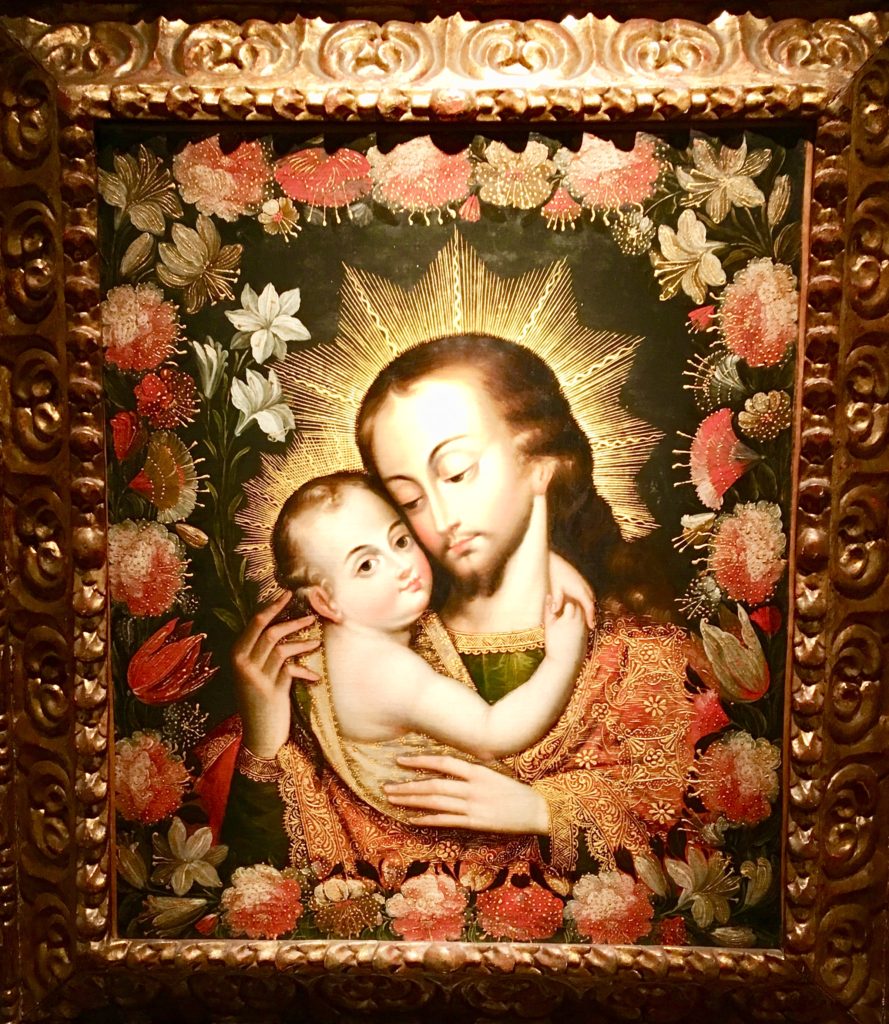 Well actually it’s Joseph but I’ve not really seen him in that kind of Madonna with Christ setting before and with a halo too. A holy stepfather so to speak.

I did however adore the Chantilly lace Christs though. I would have said it was a naive poorly executed loin cloth but it’s another representation that’s oh so Peruvian. Many of the street alters which are cared for by locals are still adorned with lace. 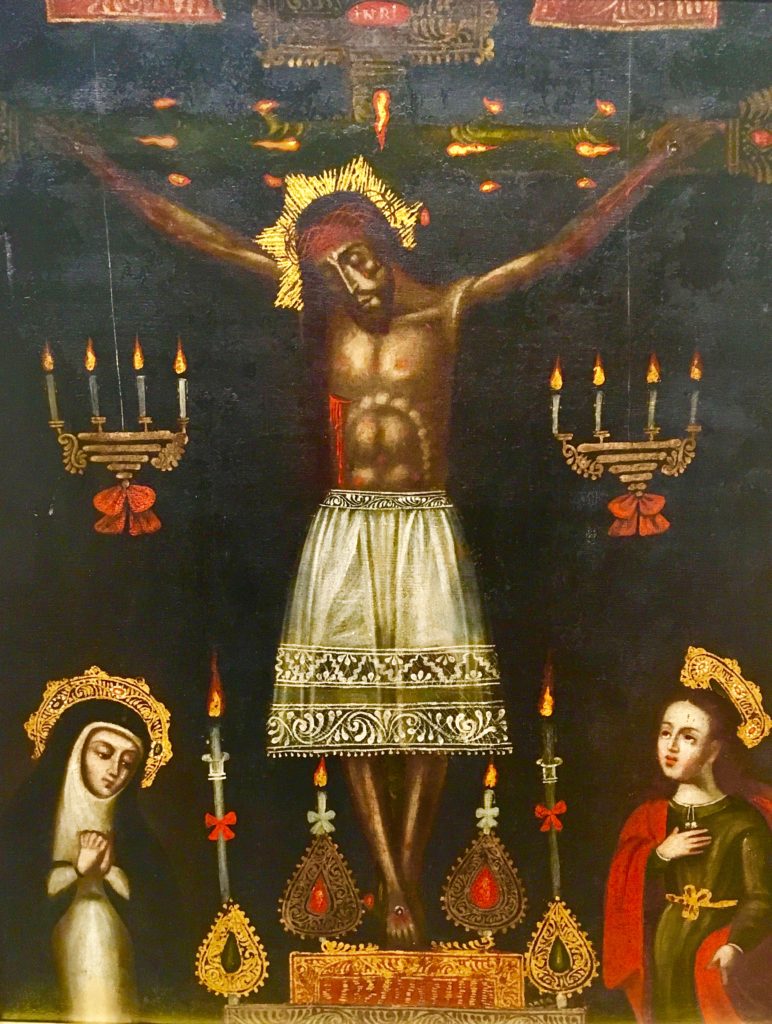 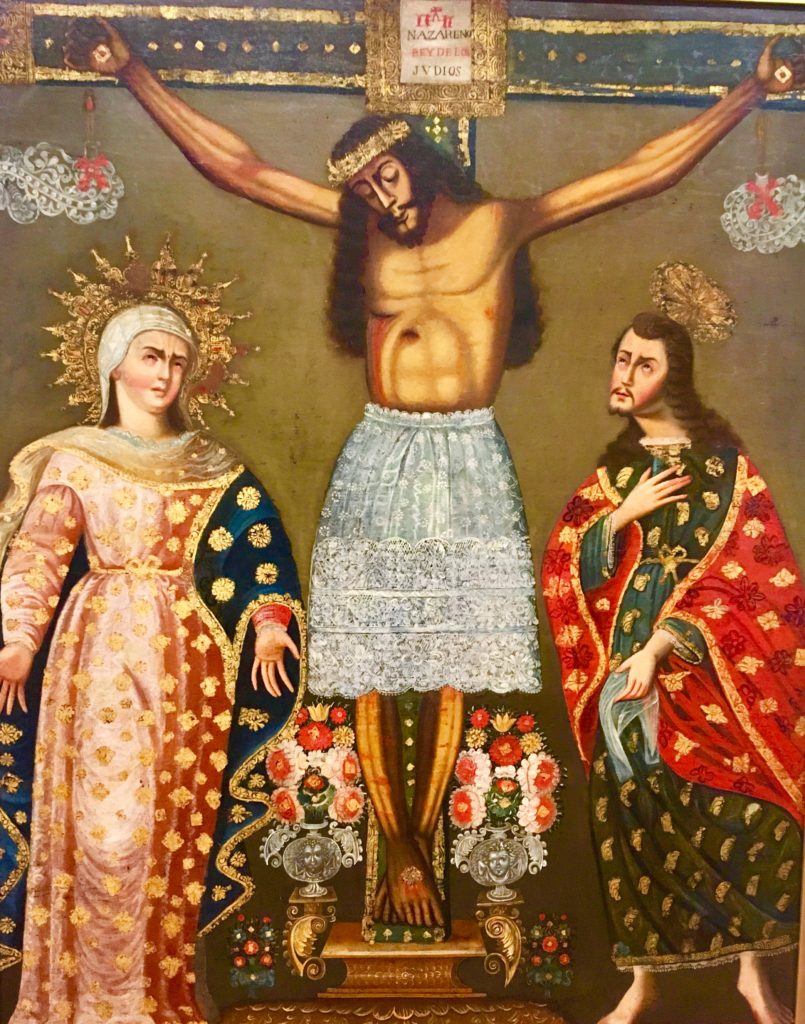 Christ is a through line in much of the art of Perú and yet I noticed that his physical presence in more recent art is less clear. His clarity within the culture almost seems to weaken as the centuries move on and the cult of money takes over as the principal regional of the masses. This wonderful painting by Sérvulo Gutiérrez Alarcón has Jesus drawn in only black and his face seems so hidden that you can almost see more than one profile staring out from the canvas. 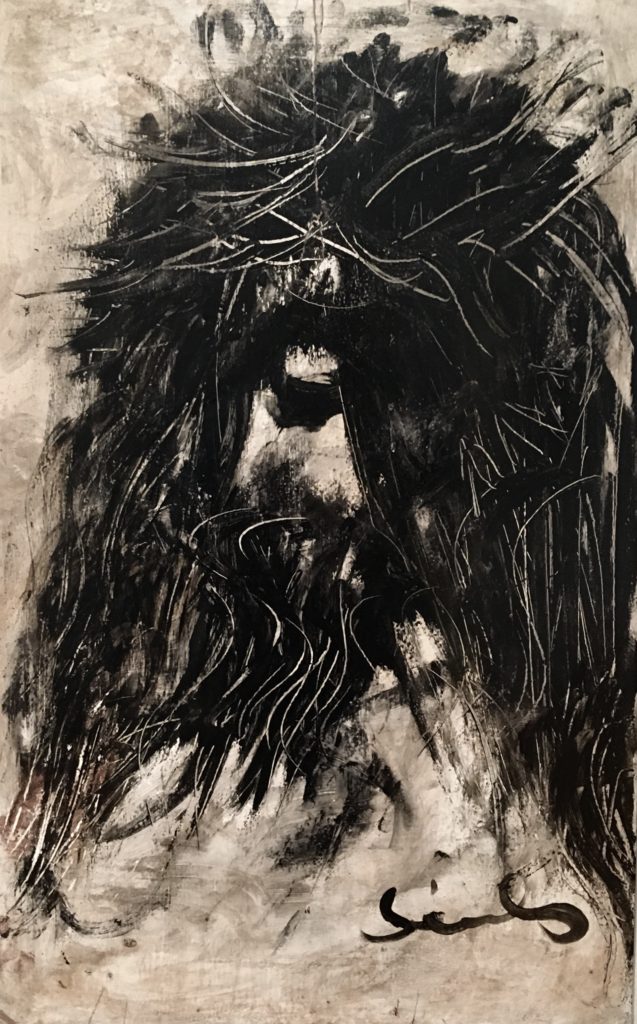 And by the time he painted this next image of Christ we can barely see him at all on the canvas at all like he’s becoming invisible. 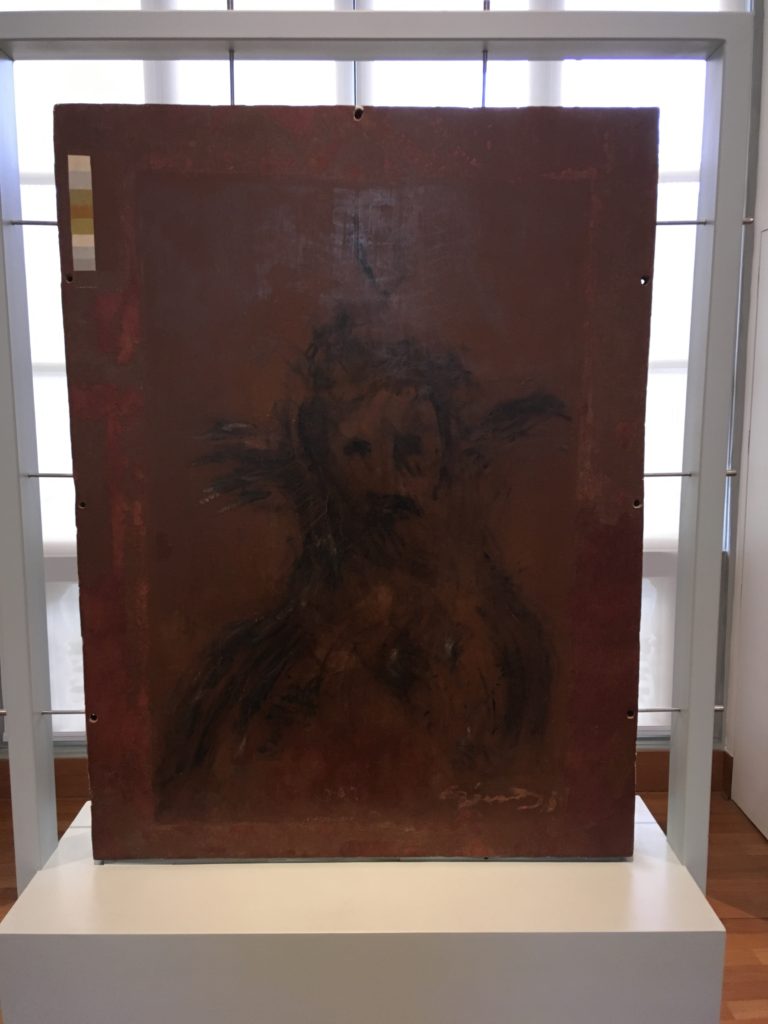 I always get inspired seeing art to become art myself. I encourage others to do the same and to send them to me here. Me and my beard bro. 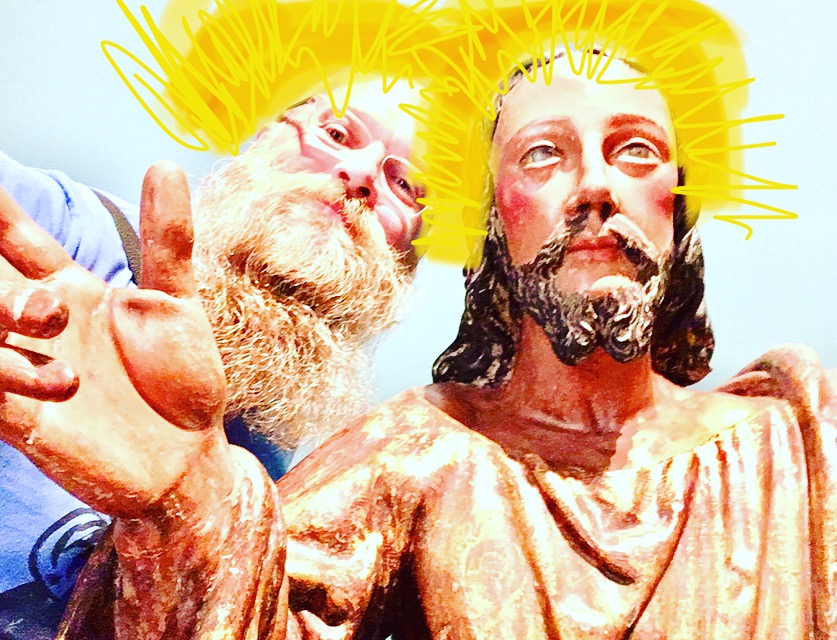 However my playfulness today was borderline god complex. After joining with Jesus I visited a water park the Circuito Magico del Agua and thought I was Oceanus, god of the water again. I must keep myself in check. 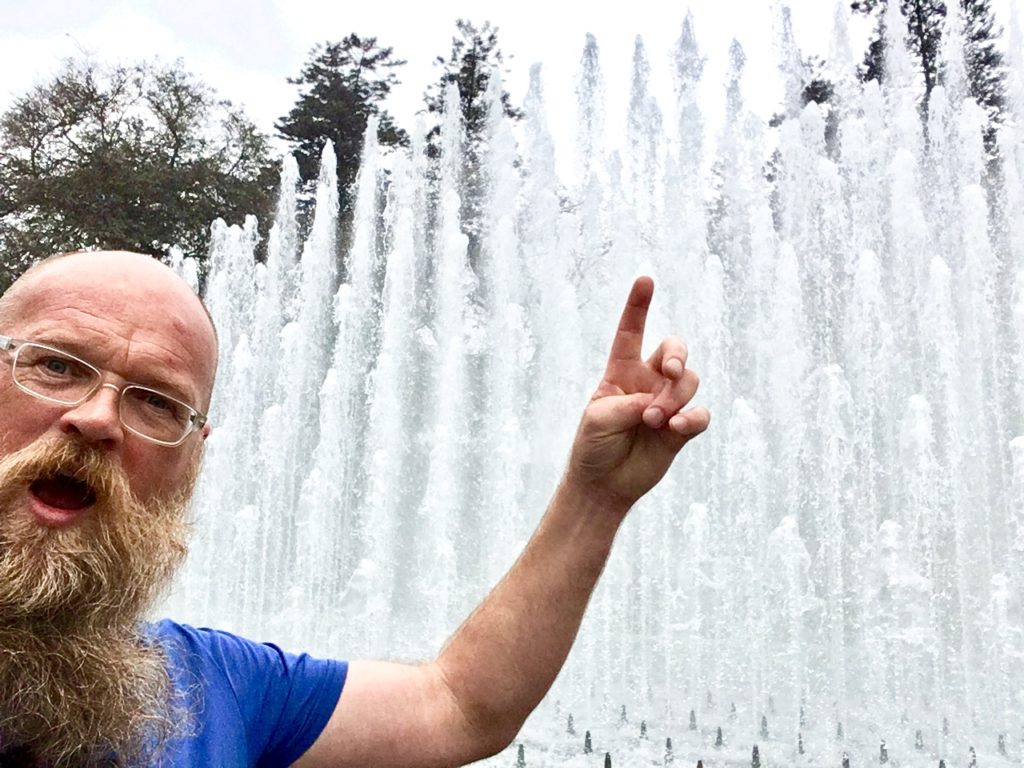 Olga told me that modern art in Perú has always struggled to find a voice of its own especially  in the late 19th and early 20th Century when European movements in art dominated the scene. Many artists here were caught up trying to explore these movements in their own way but were overshadowed by those we now call the greats. One artist who was clearly very talented but seemed to suffer from being an excellent chameleon of almost every artist and every movement that came out of France was Carlos Baca-Flor. 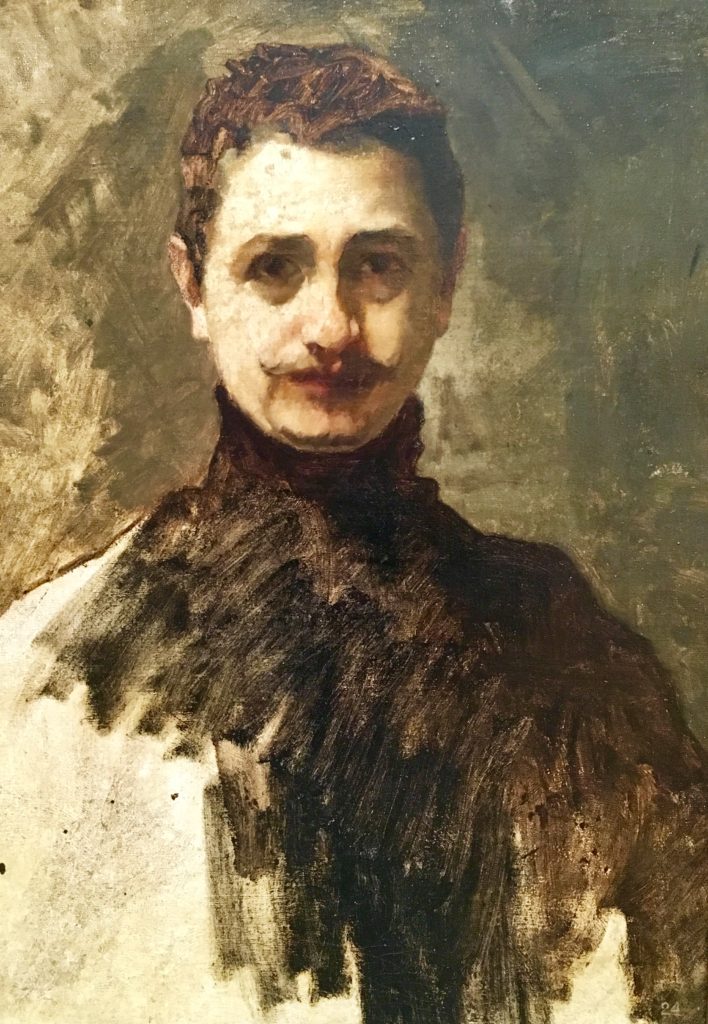 Born in the white stone city of Arequipa in southern Perú his father died when he was 12 and he moved to Santiago in Chile with his mother who adopted 12 poor children. Carlos excelled at art and won numerous prizes at art school. His contemporaries found him to be hyper critical of their works and not popular as a consequence. So great was his young talent that he was offered a special prize for winning so many others. However to claim this prize he had to become a naturalised citizen of Chile. He refused to turn his back of his homeland and headed to France instead to explore his talents in Europe. It is here that we see his playful mimicry of the French greats Degas, Cézanne, Monet, Manet and Van Gogh. 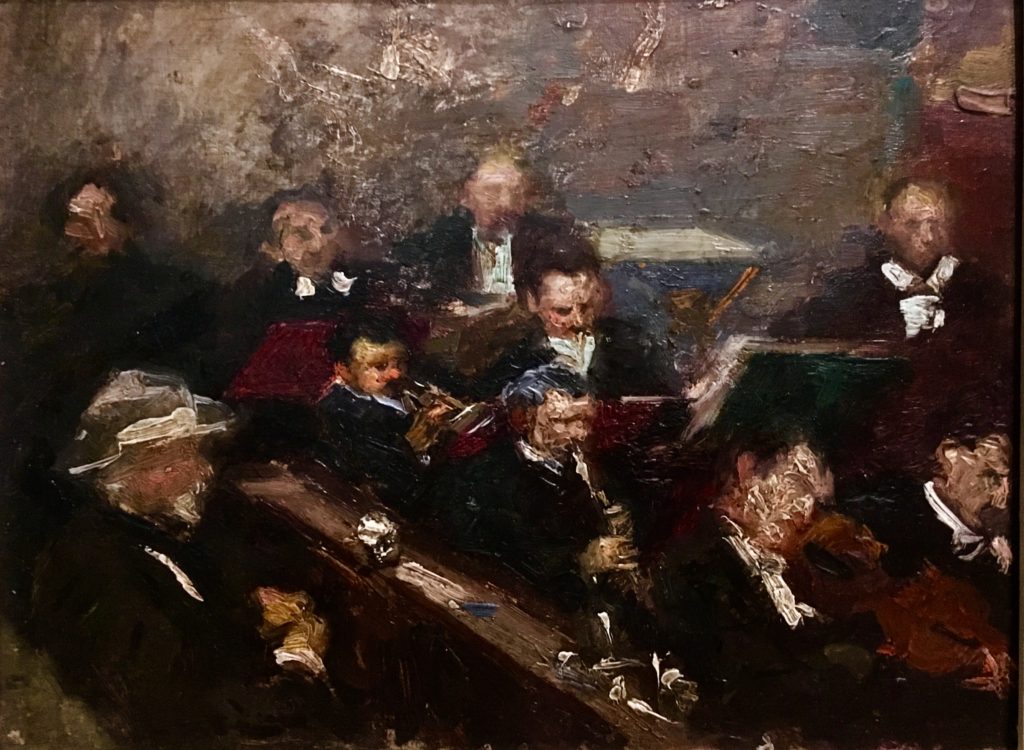 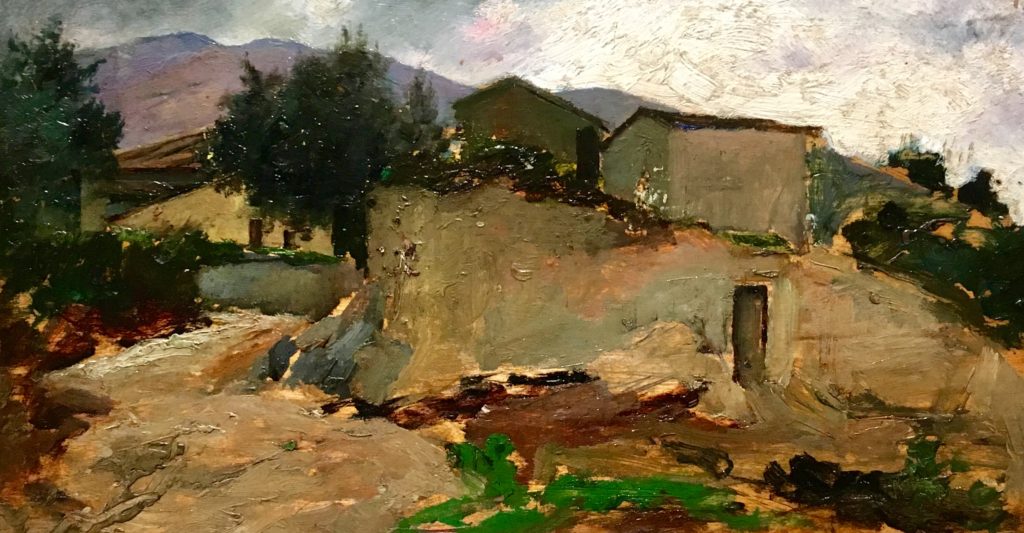 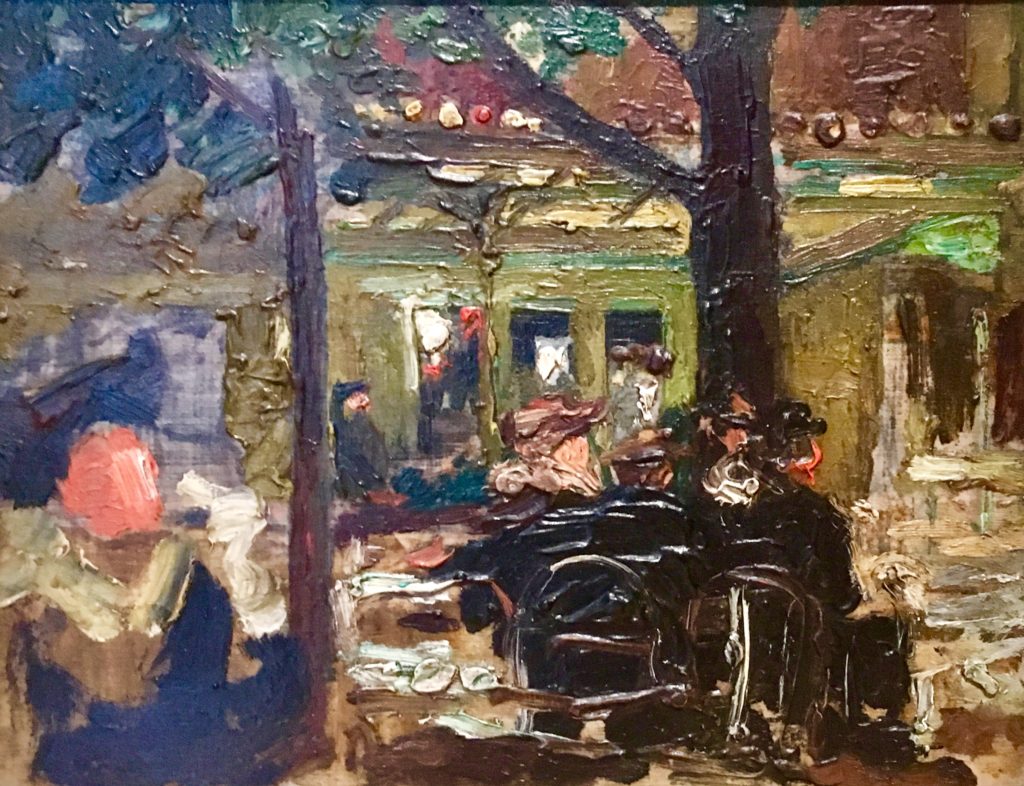 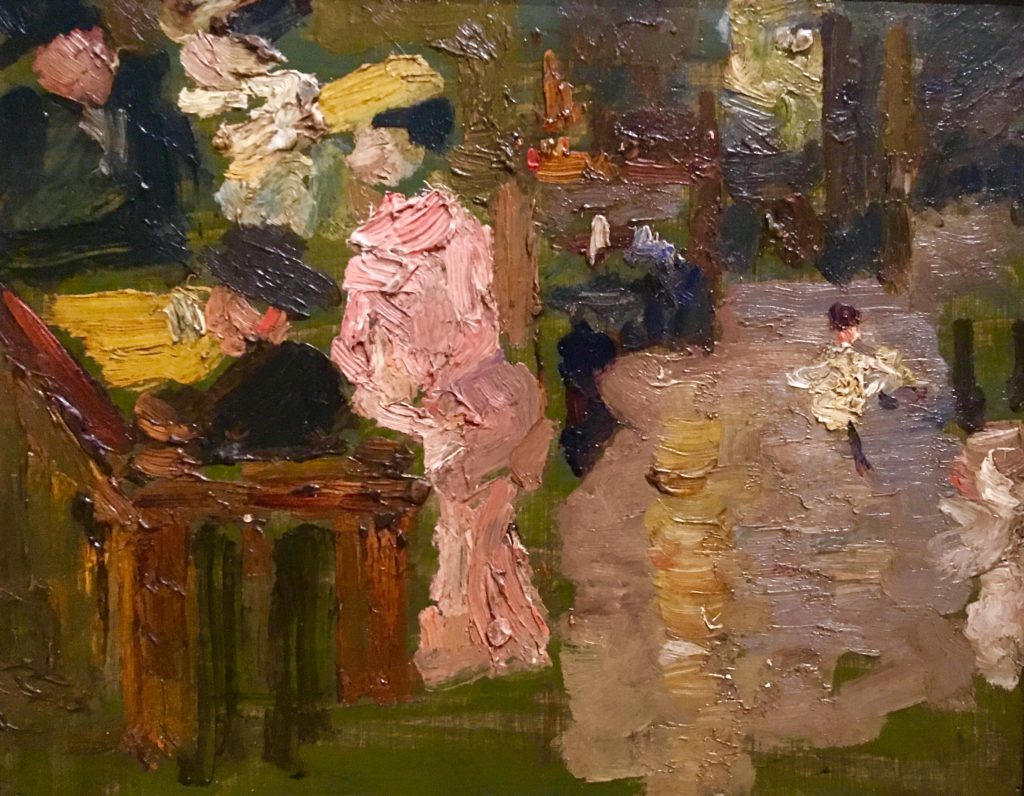 Not always pastiches but often a playfulness with techniques they used too. Though he died a successful artist in France, I still think from the works on display here in Perú that he didn’t settle on a true voice of his own. I’m no expert and these are my only paintings by him I’ve seen so I shouldn’t rush to be so critical but as I mentioned earlier he was always hyper critical. I should go and see the collection of his works in the Museu de Terrassa, near Barcelona? I do however appreciate his immense talent. 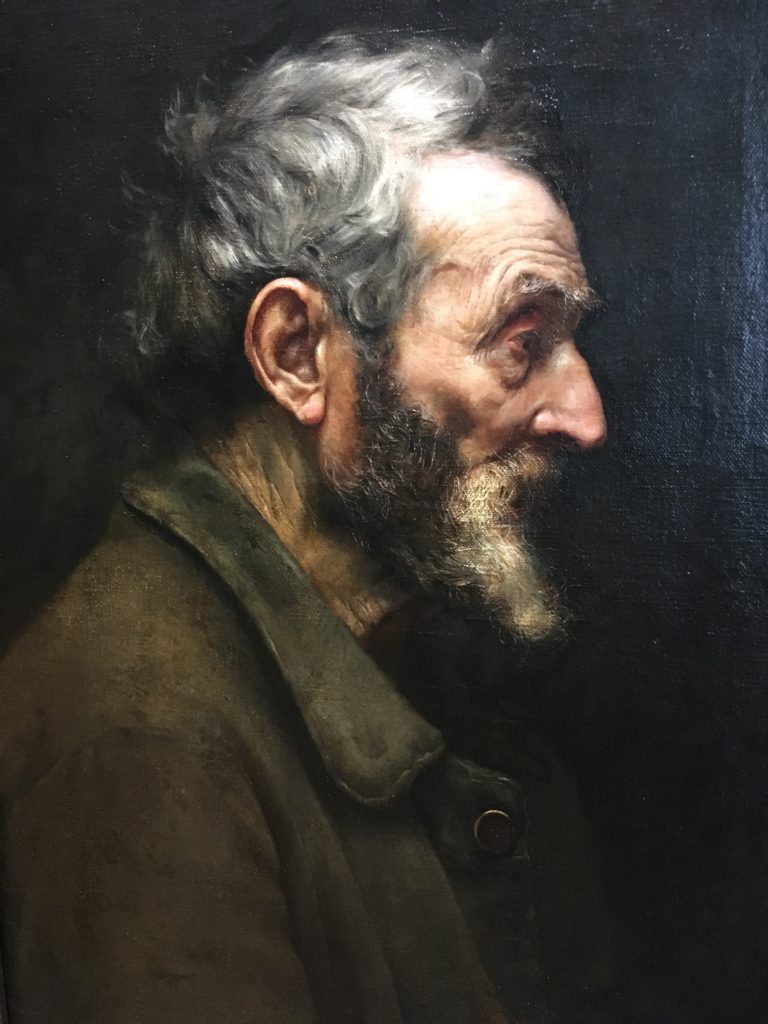 The other burning question I’m left with about Carlos is his personal life. I want to know if he was gay. Its just some of his loveliest works are of men, semi naked or nude. 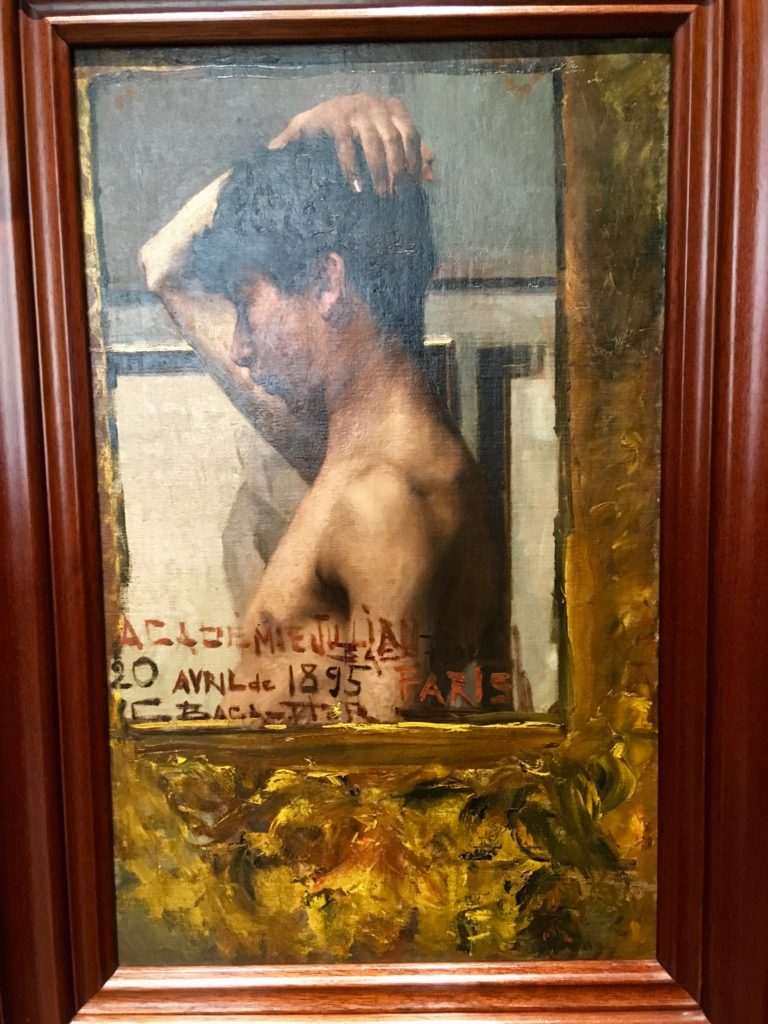 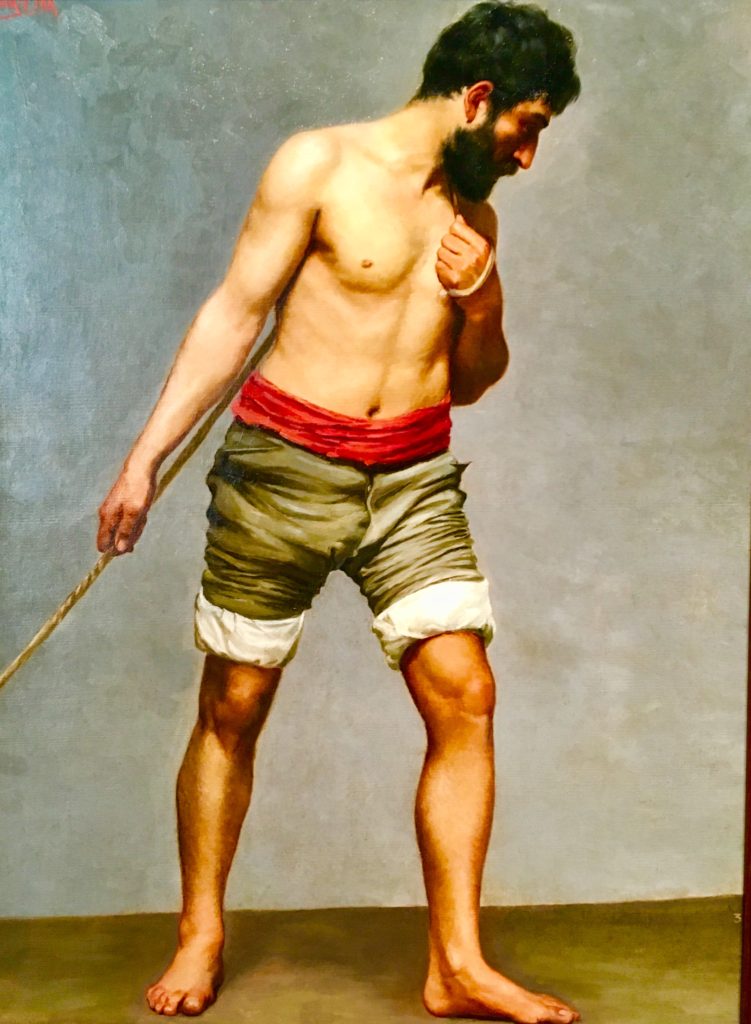 Did Carlos have more than just a ‘friendship’ with US banking magnate John Pierpont Morgan? That’s often been a euphemism for a gay relationship. I will try to find out. If anyone out there knows please leave any gossip in the comments section below. I love that Lima has opened new avenues of learning and pure nosiness for me. Gotta stay alert in life. Or if you’re bored, check your Instagram account. Or check mine. 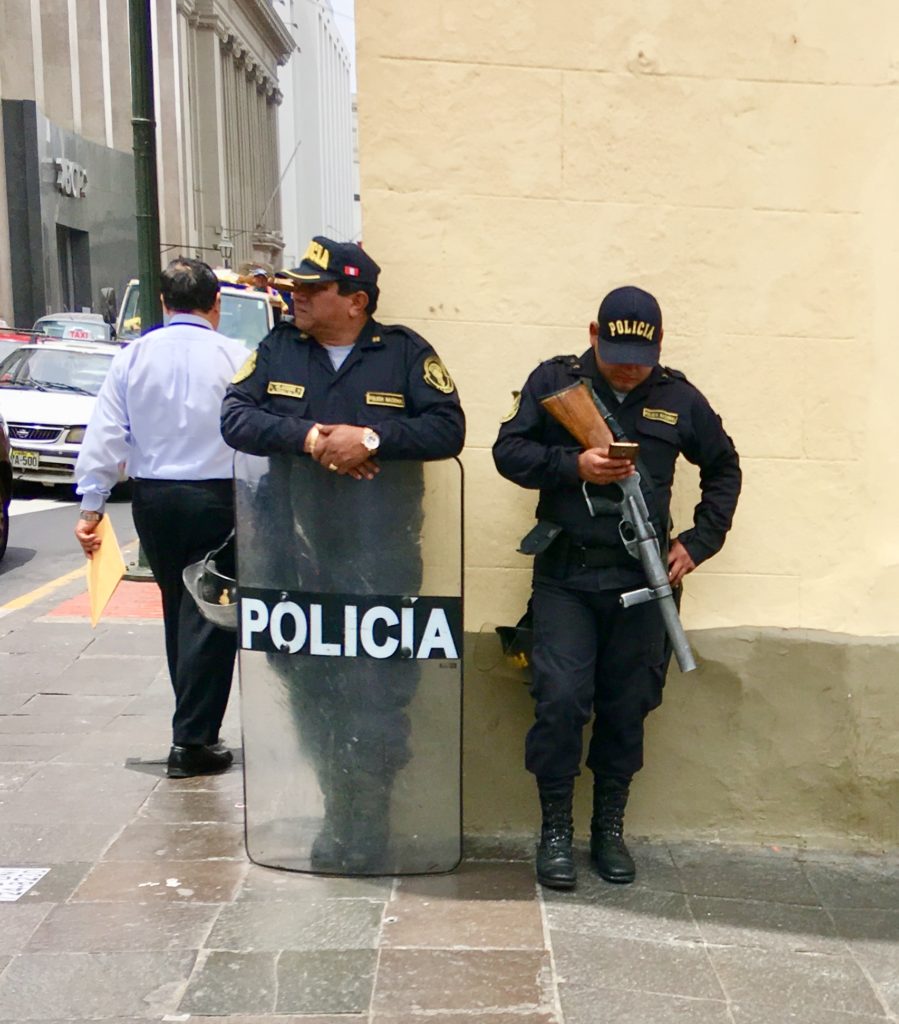 This Lima blog was a tough write. At first I couldn’t seem to pin down a proper theme. It’s all very erratic but in truth that is the very essence of Lima. Lima is a very crazy place of opposing ideas and clashes of cultures all side by side. Wealthy districts with their watered park squares sit alongside poorer districts where most residents are too scared to walk. Lima is unique in Perú and many of the people I meet just laugh everything off and say “That’s Lima!” So from the donkey’s belly I leave you with the theatre of the colon. Like you give a shit. 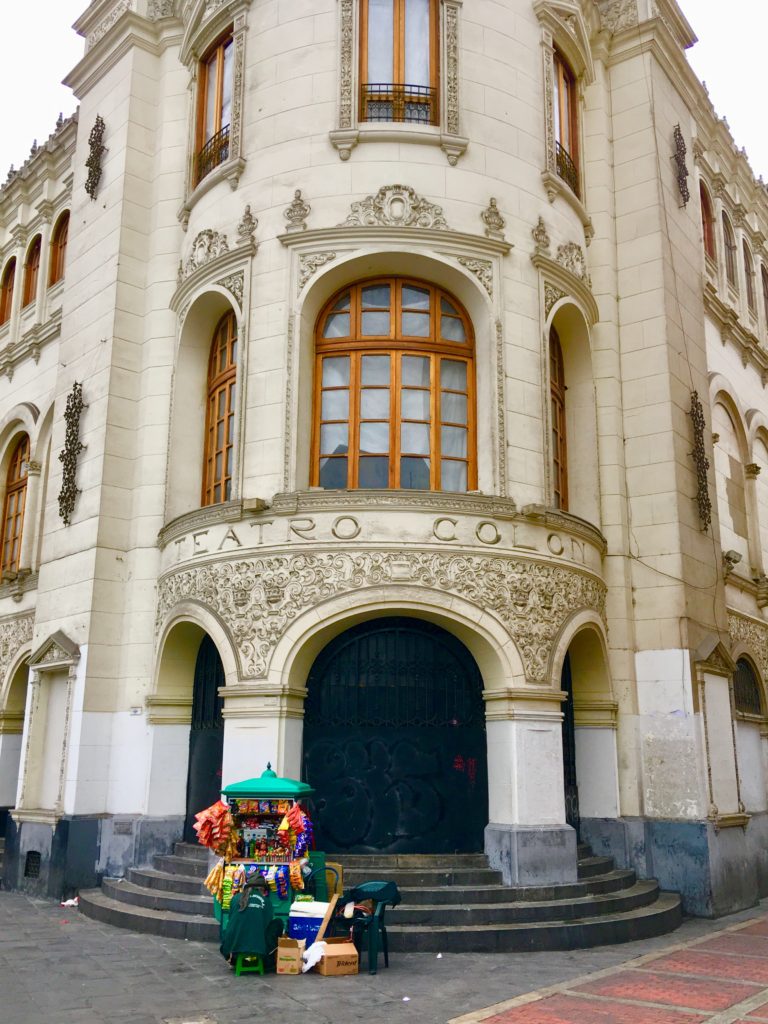 2 Replies to “more tales from the belly of the donkey”