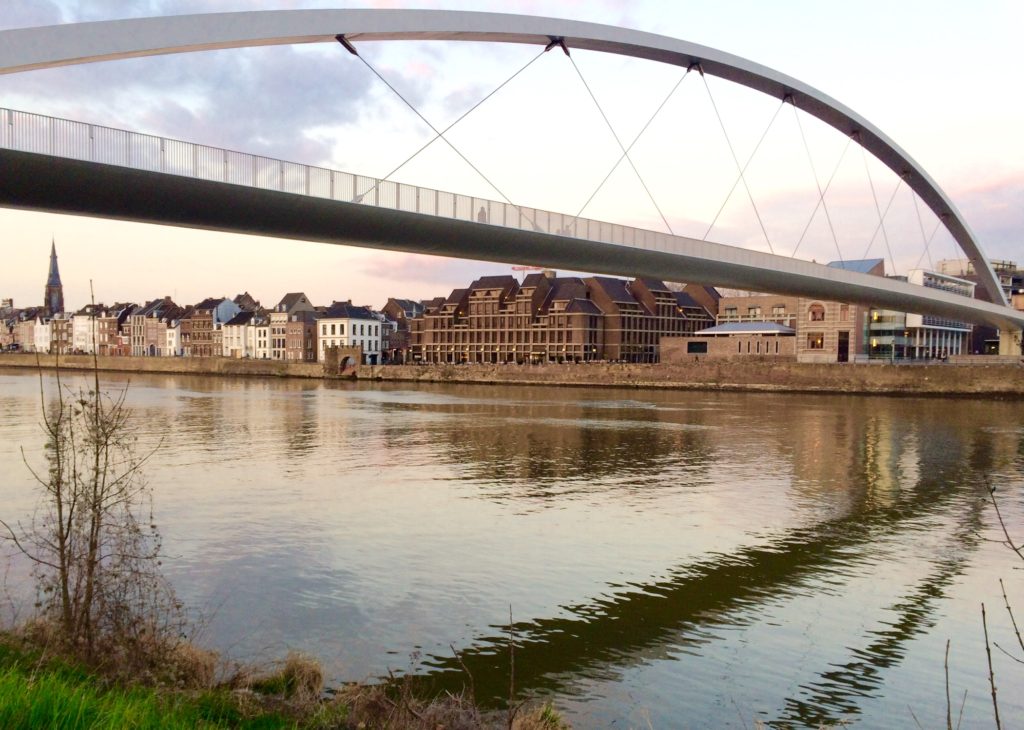 The plan was to get a feel for the General Election today. So I leapt up and shot out to get my beard trimmed and my head shaved. I asked the barber where the nearest polling station was and headed to the railway station. There was a white tent in the corner of the entrance hall like they were a forgotten stall in a church jumble sale. And there were just two people voting. I discretely took a photo in case it was illegal to photograph any voters. It was so dull I didn’t included it. When I asked locals what they thought about the Maastricht Treaty they didn’t seem to care much about it. Unlike in the UK where we wear it like a mill stone, they couldn’t remember when it was signed in their town. Newsflash people… Europe Calling! 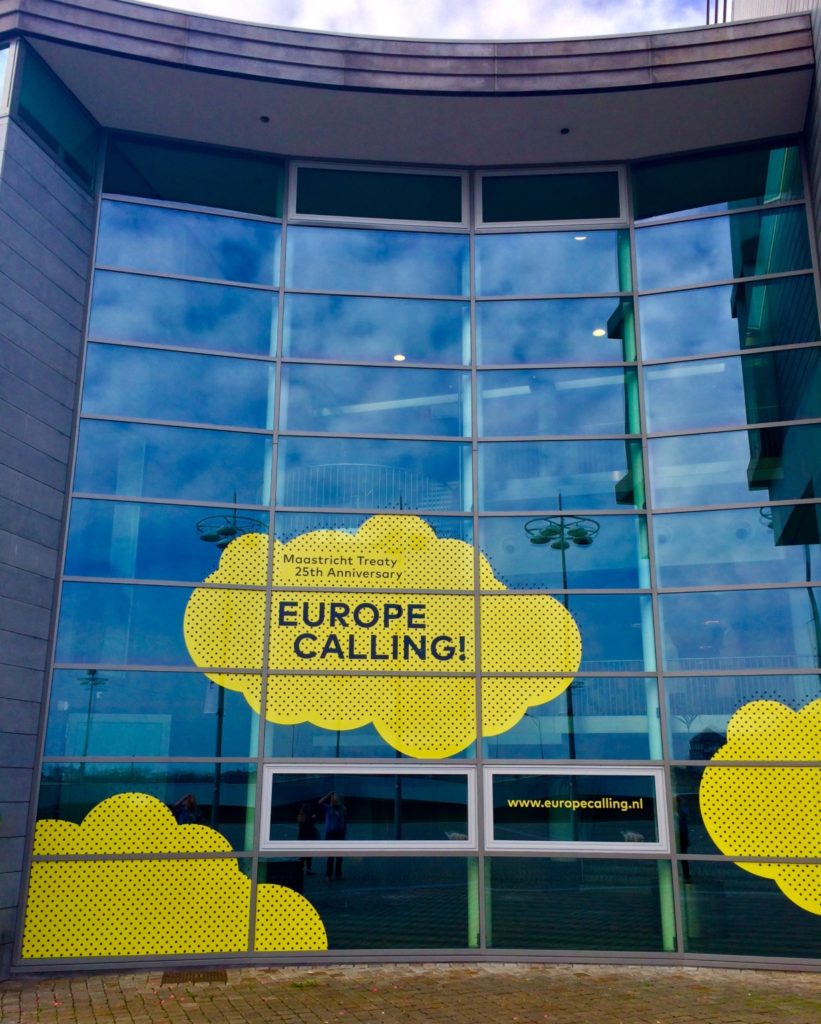 It’s the 25th anniversary of the Maastricht Treaty this year

I set off to weave the shopping lanes of medieval Maastricht. And so it is that I have to finally admit that I am having the best time not seeing all the things they suggest in guide books. For me it really is the people watching. And the environment of their towns and cities. You hear conversations drifting towards you and it sounds like it’s English until a phlegmy “g” rasps out and you realise it was Dutch. The kinship of the early Saxon language is remarkable and leads to some howlers. As you might know Crinkle Cut Crisps is Dutch for Wrinkly Vagina Crisps, so here the crisps are ‘Ribbled’. Do I just have a Hastings Seaside Postcard kind of eye? Yes I do and it amuses me no end. 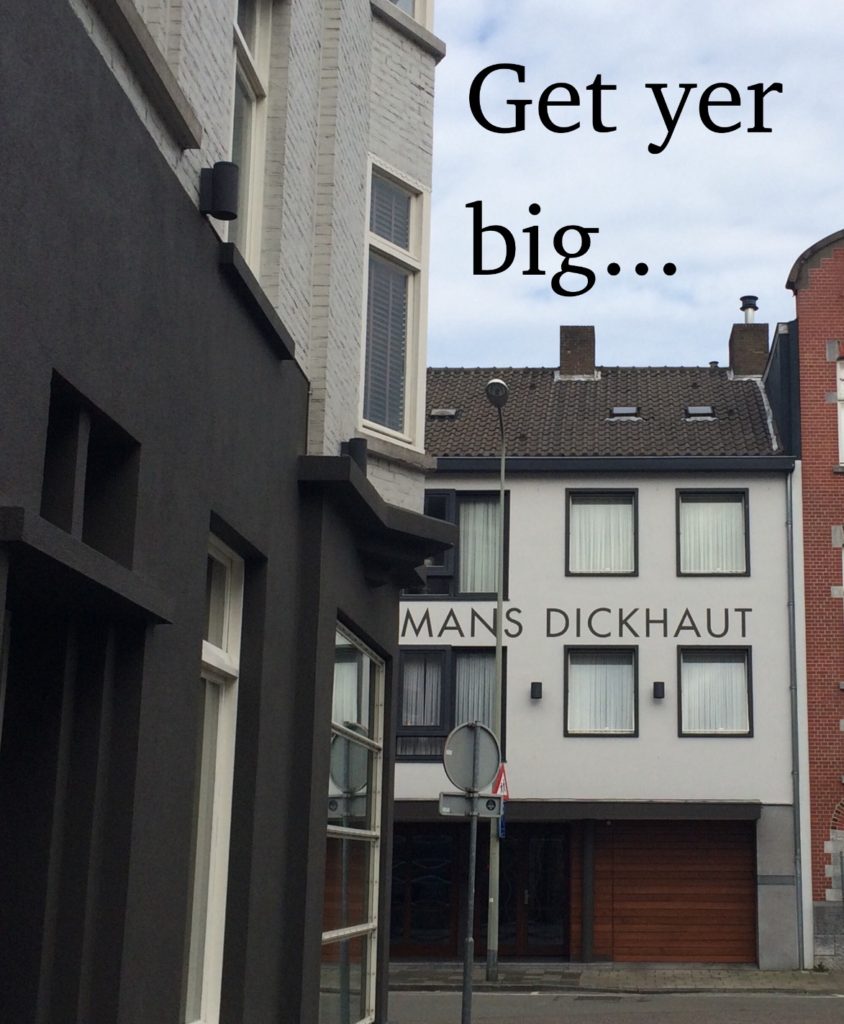 Shops With Silly Names it is then!

The shops just keep coming too. If it’s not their names it’s the slightly odd slogans. This morning I found a restaurant and even though  the slogan was well meant it didn’t seem to come across right

‘guests walk in, friends walk out!’ What are they implying? 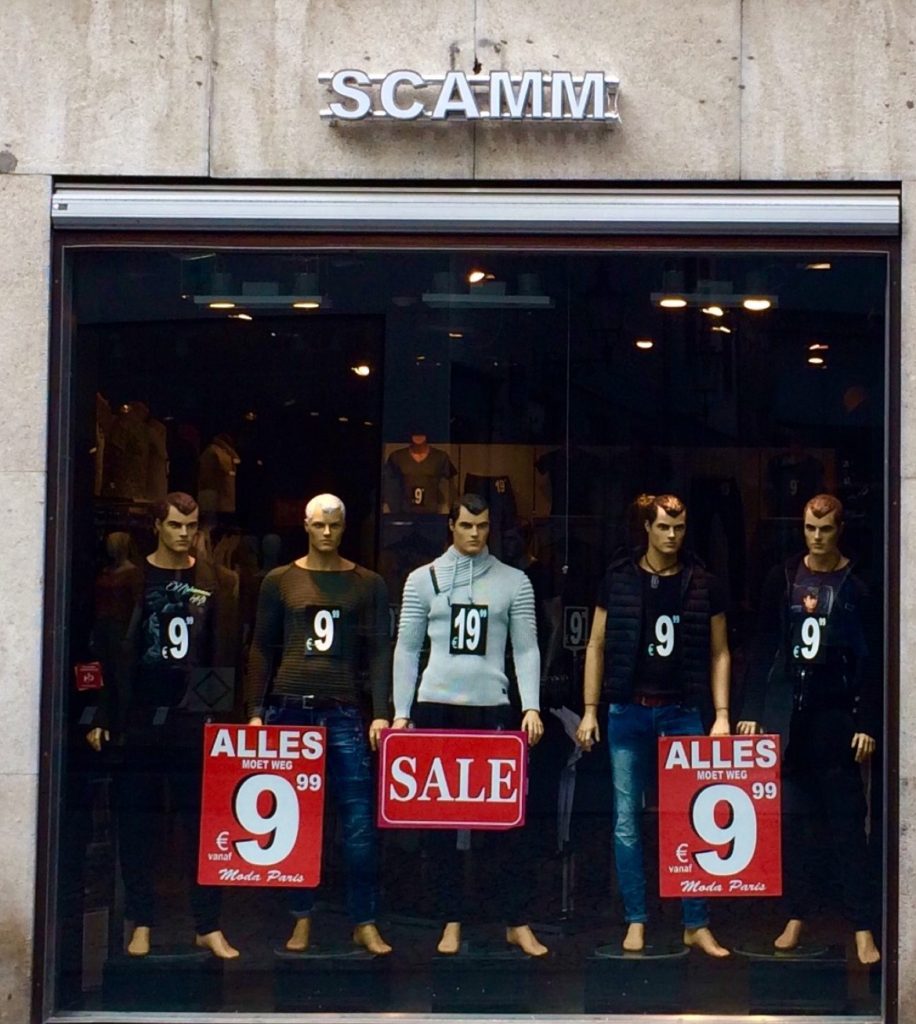 Yes Scamm. With all the über expensive shops throughout the town this shop must be nefarious in some way. And I saw a Turkish Restaurant in Amsterdam two nights ago offering Sham Deals.

The whole Comedy Shops concept thing is on another level in  Maastricht!

Wonderful large market squares seem to exist in all Dutch towns. They all contain churches (with obligatory bells), shops and eateries with sprawling outside seating areas and flanked with trees. 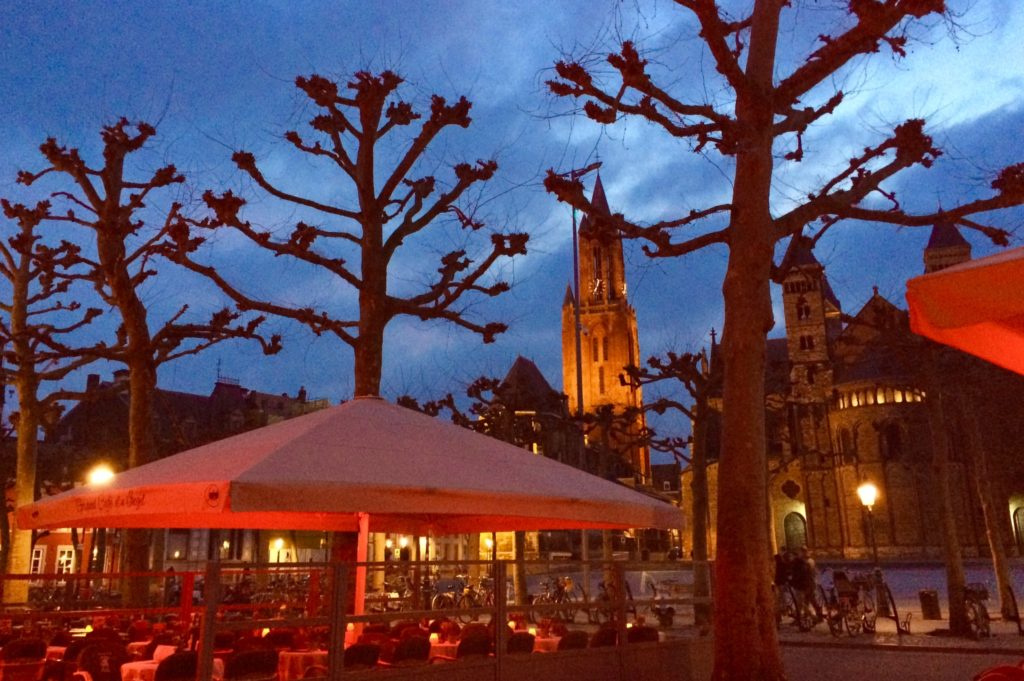 Churches and cathedrals everywhere you look

I was told that with the drop in religious worship just now churches would fall into ruin if they couldn’t be turned into something say like a bookshop. I know. A bookshop!! As you can see it’s not working out at all well. You’d hate it Val. I know books in beautiful settings that serve refreshments is not top of your list of happy places. The café in the knave looks especially rotten so don’t worry! Haha! What an amazing place Boekhandel Dominicanen is. 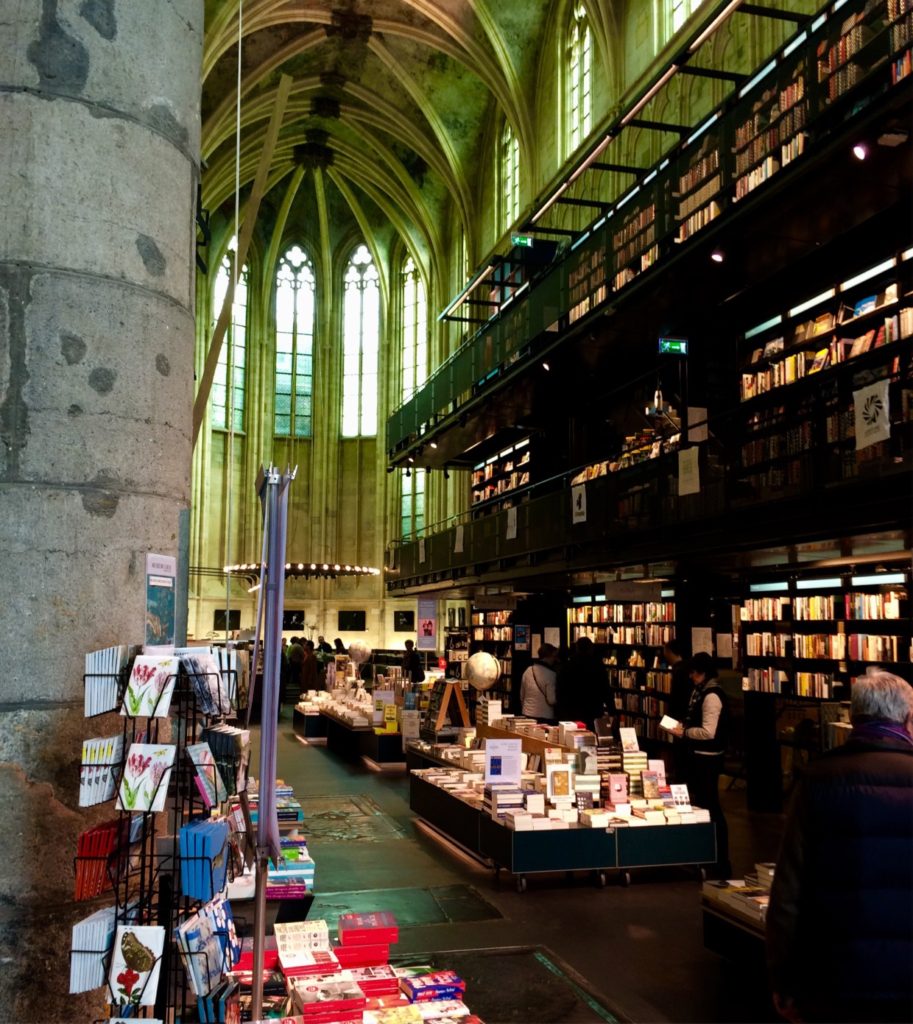 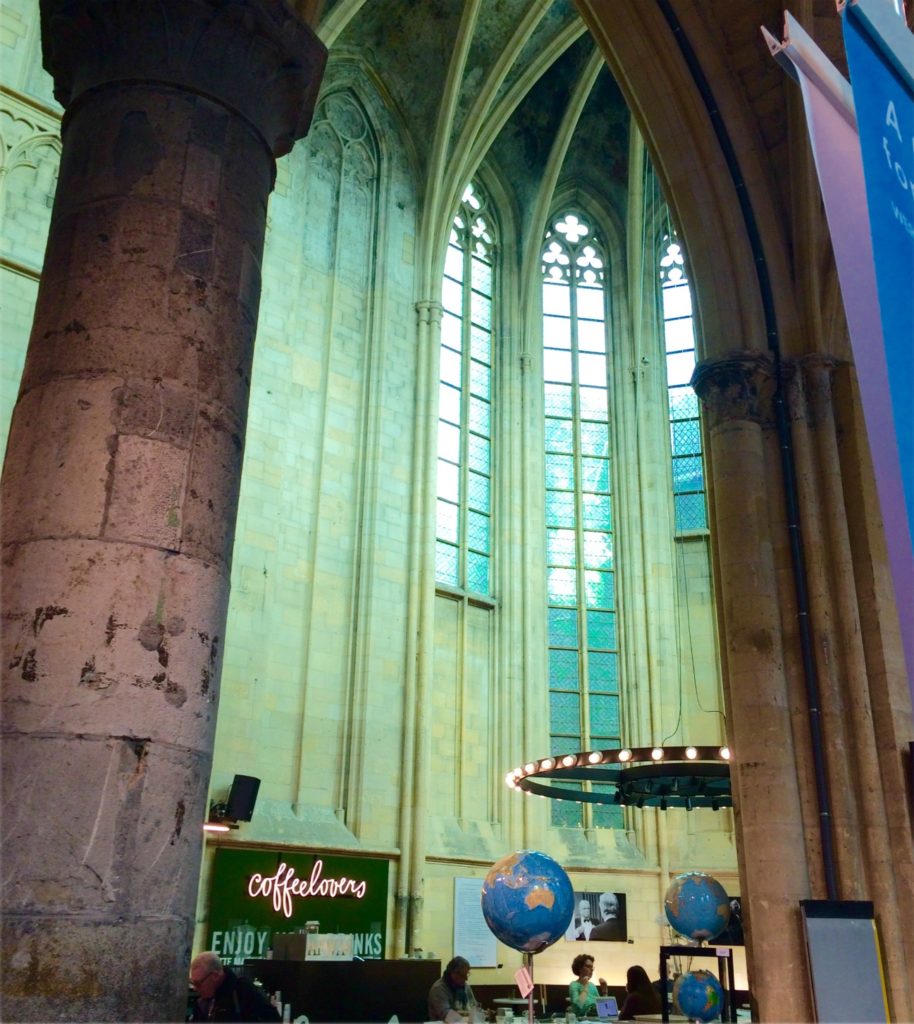 When language is too cute

The Dutch for ‘to hire’ is Te Huur but to buy a wee love nest is ‘Te Koop’. 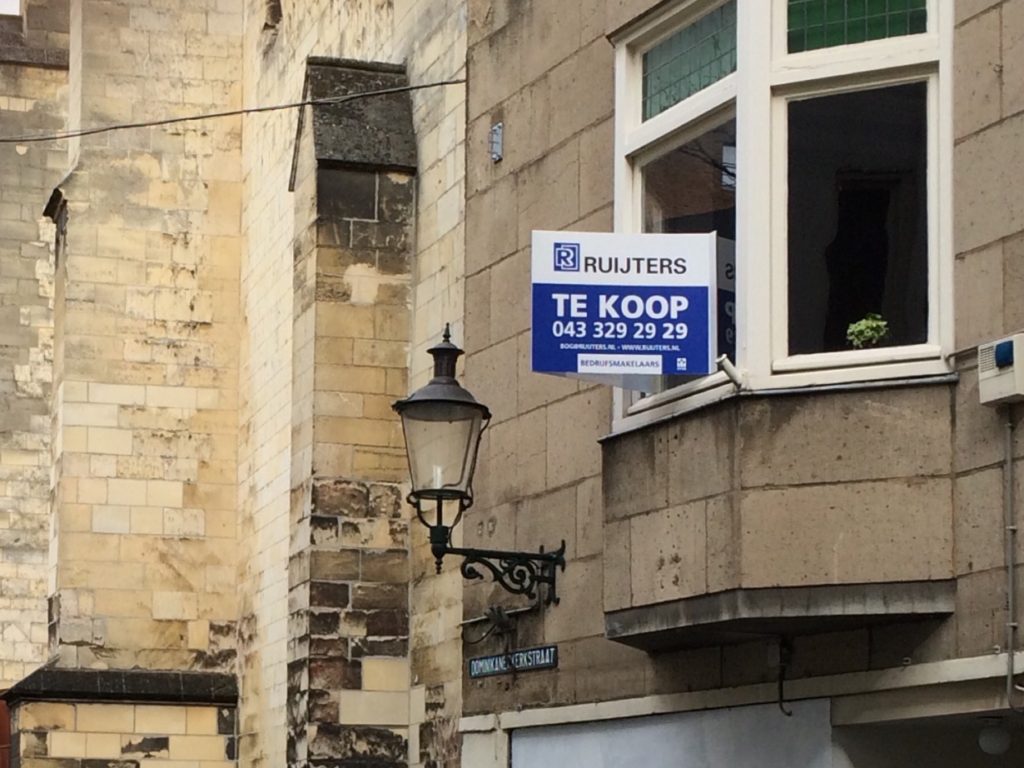