The river Arno flows through the heart of Florence though many of the locals say that the south side is the real heart of the city as this is where the locals hang out avoiding the tourists like myself. Yet they all advise us to visit there spoiling their little local secret. It seems strange to me that even in EM Forster‘s novel ‘A Room with a View’ Eleanor Lavish and Mr. Eager often complain about tourists spoiling Florence. Indeed Miss Lavish believes that every copy of the tourist guide Baedeker should be flung into the Arno. And still today the cry of too many tourists echoes all round Florence. My trick to encountering less of the likes of myself and my kind of view killers is to venture out after dark or very early. 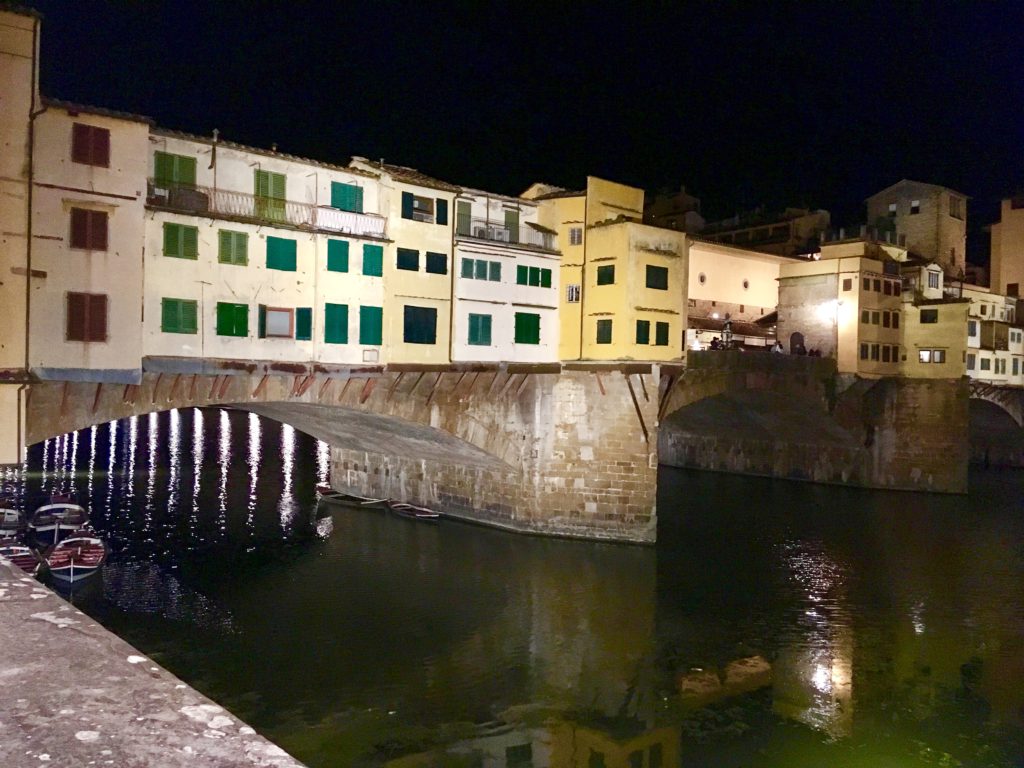 The famous Ponte Vecchio bridge is a medieval stone structure that still houses shops along both sides. This is a wonderful sight to behold as the old London Bridge I dreamed of as a child used to be the same, covered in Tudor structures as did many other bridges in Paris and other great cities. Here in Florence it remains and all the shops were once butchers and I imagine the waters of the Arno often ran blood red like the cover of Baedeker. It also brings to my mind the lyrics of Lauretta’s Aria from Puccini’s Gianni Schicchi, used as the opening theme in ‘A Room with a View’. It is a one act comic opera in which the servant of a dead wealthy man dresses up and pretends to his deceased master to change his will. The dead man’s family are horrified that all his wealth will go to a monastery so force the servant to commit perjury. However the servant double crosses them in favour of his own daughter so that she might marry the man she loves. In the aria ‘O bio babbino caro’ tells her beloved father of her love for the handsome Rinuccio a nephew from this wealthy greedy family. If she cannot go to Porta Rossa to buy a wedding ring soon she will go to the Ponte Vecchio and throw herself into the Arno. Romantic or psychotic? You decide. These days she could buy the ring on the bridge itself as all the shops now sell only jewellery. But the shutters above the glittering gold filled shopfronts still bear the signs of the old butchery, with the many metal hooks presumably similar to the ones used for hanging carcasses on? 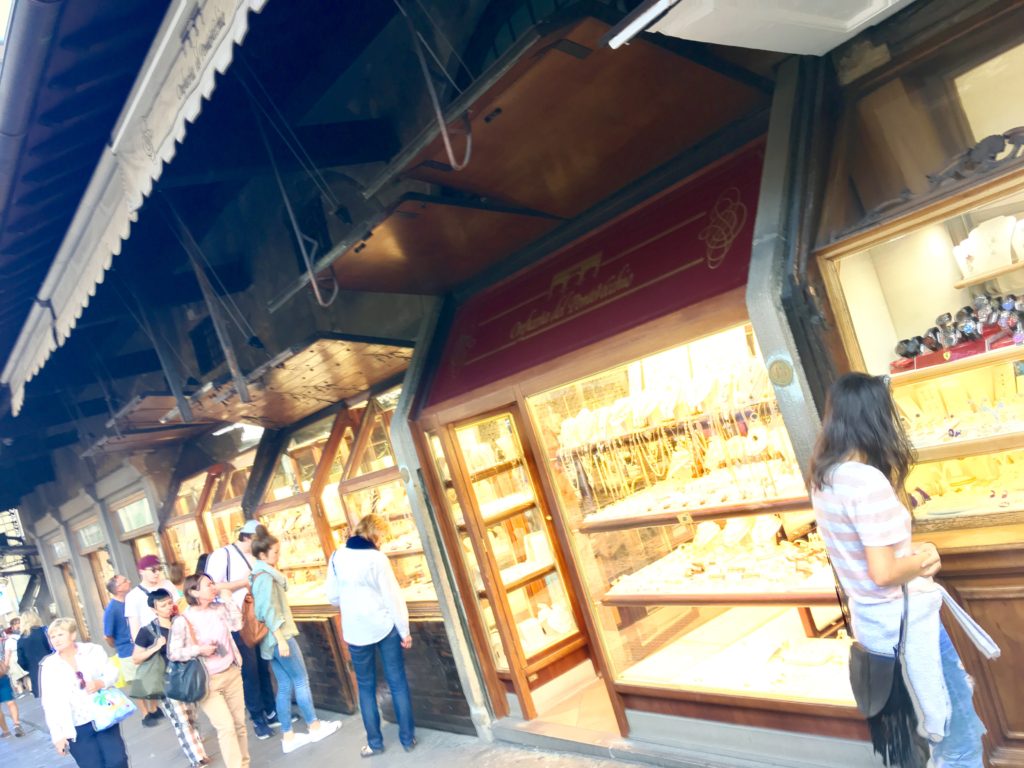 I rise early to head south of the Arno to visit the Bardini Garden. A lush green rising hillside that offers spectacular views over the City. This Renaissance garden was only recently opened to the public and is little known and relatively tourist free. Especially first thing in the morning. A great Baroque flight of steps fringed with spring irises rises up a steep green grassy hillside. 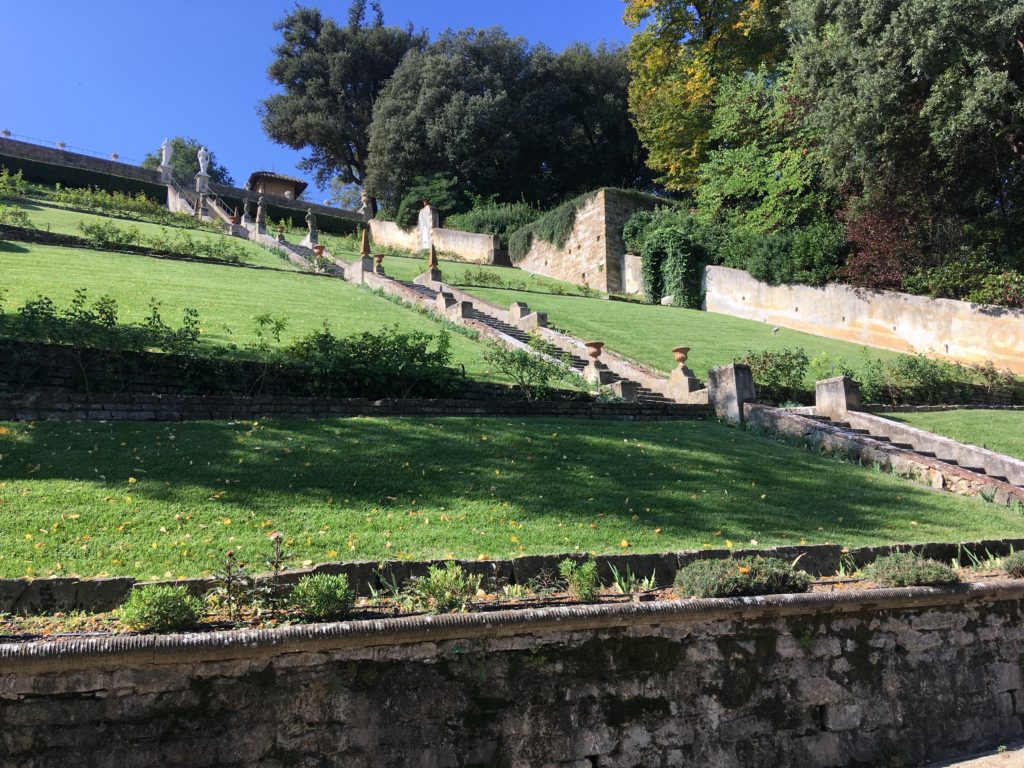 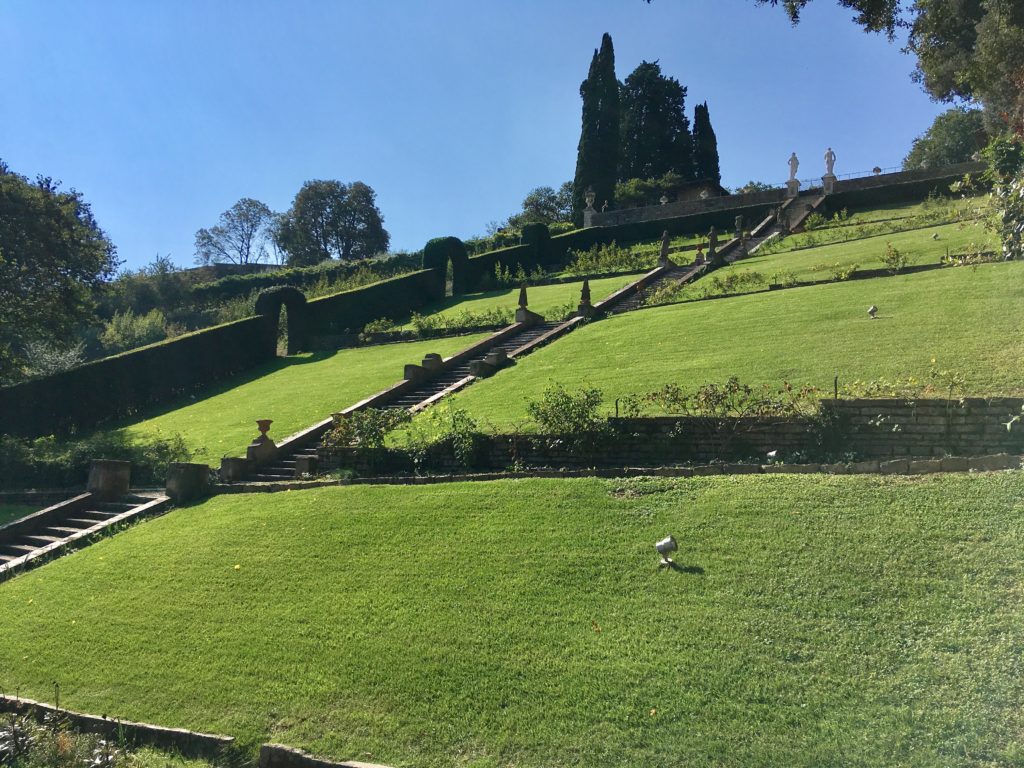 With the steps being too fragile for the heavy footed trudging public there is a winding series of paths leading to the Belvedere at the top. As you climb ever upwards, the trees part and reveal wondrous leafy framed views of the city. 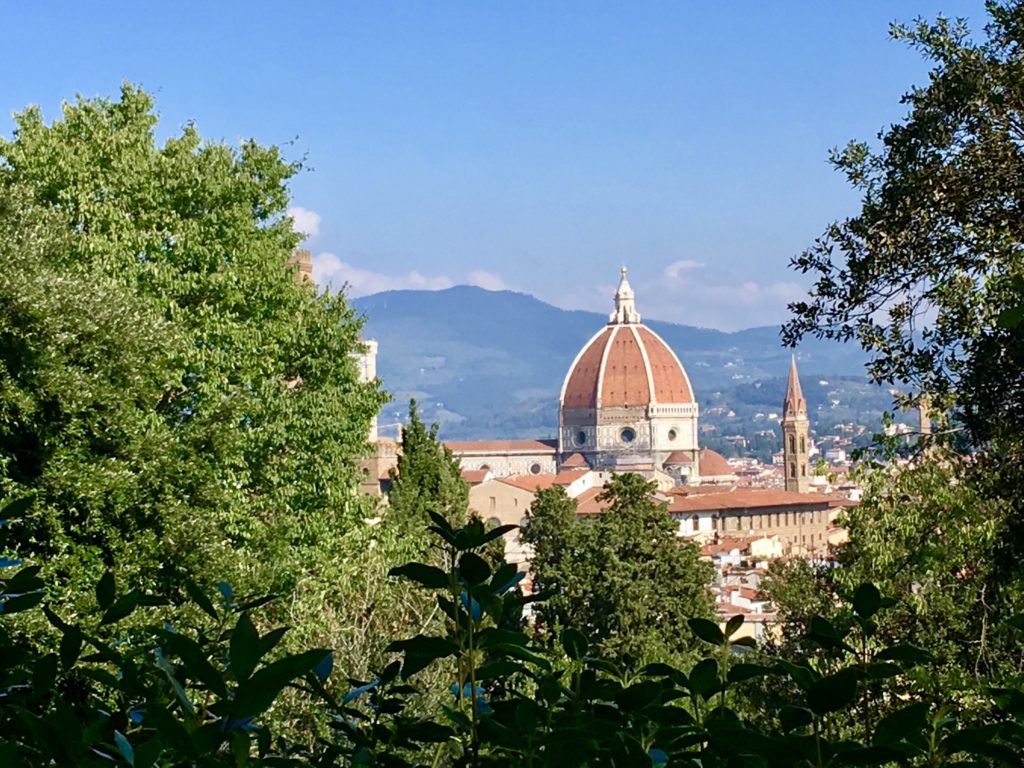 Higher and higher you weave and more areas of the garden reveal themselves along with more and more views. Medieval-esque terraces of olive trees. Pockets of kitchen gardens bursting with swollen pumpkins and squashes and this covered walkway of wisteria. In spring the scent must be so intense as the warmth of the spring sunshine dapples through the leaves and blossoms. 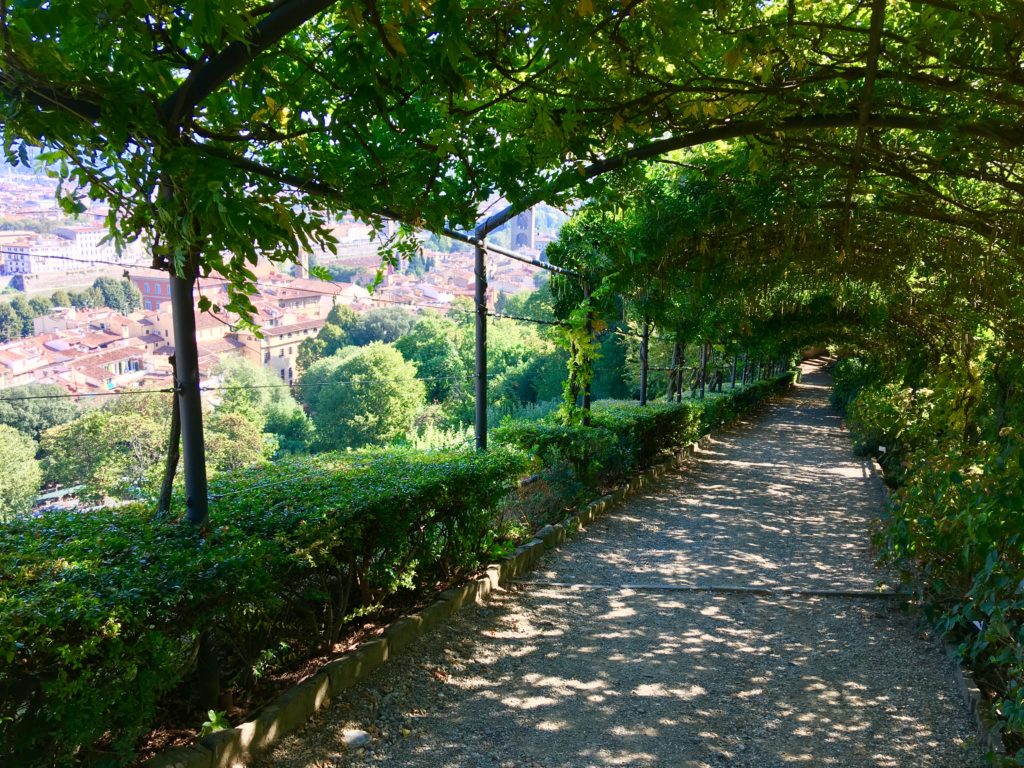 At the summit there is an open arcade where refreshments are served in the cool shade with Florence laid bare and the Tuscan hills rolling away in the distance like a pale blue dreamscape. 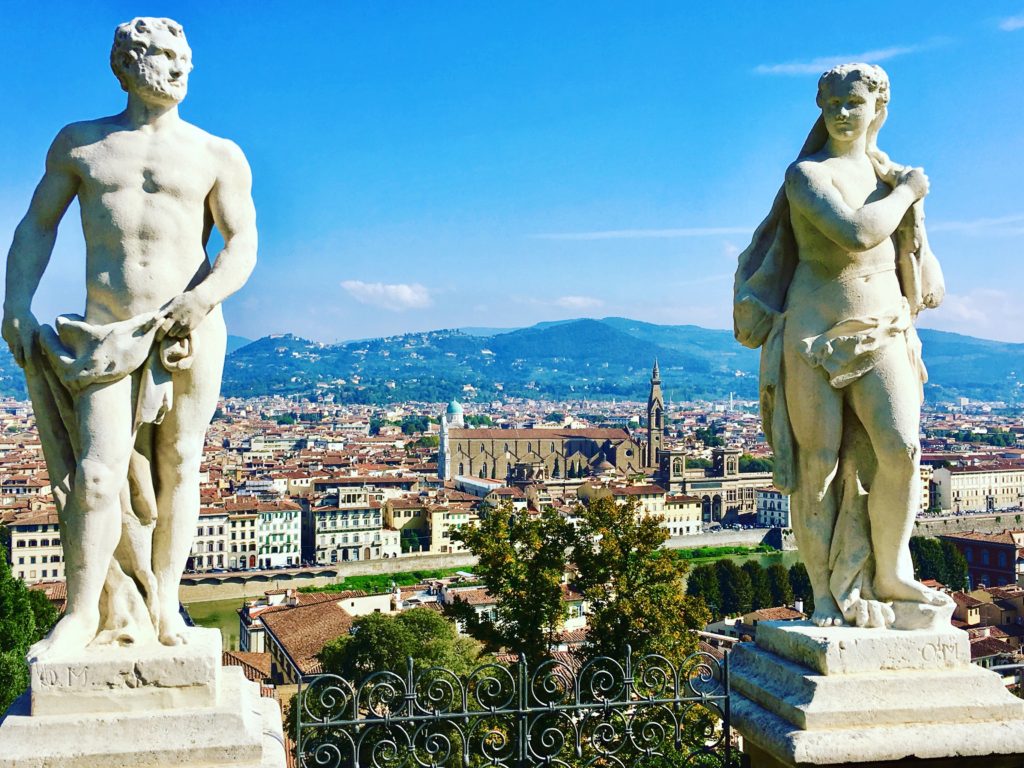 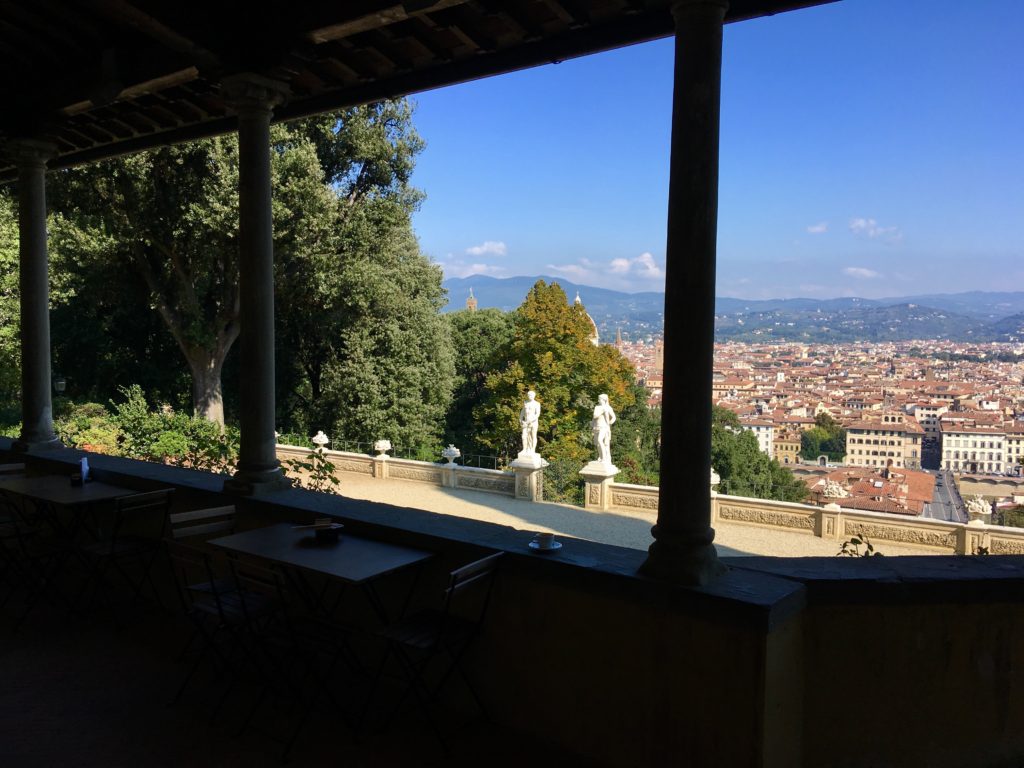 Architecture here in Florence is definitely fortress like. Buildings are solid and vast and in the Romanesque style but often in Tuscany with a greater artistic influence. Buildings seem impregnable with high window and great wooden shutters to snap shut. 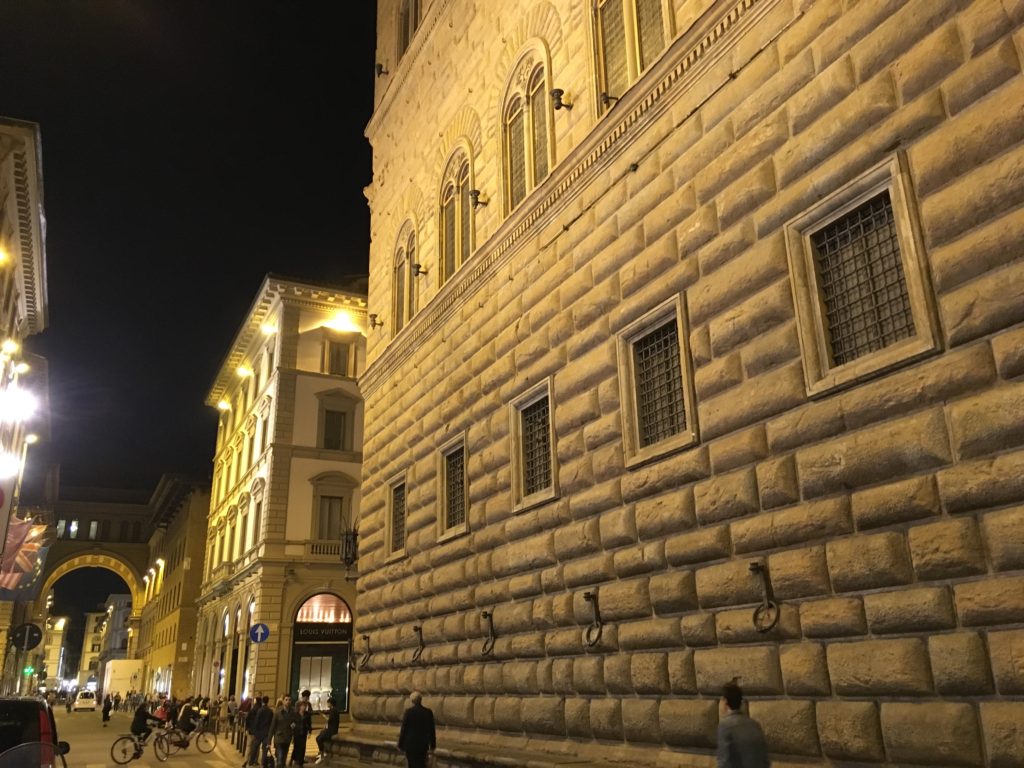 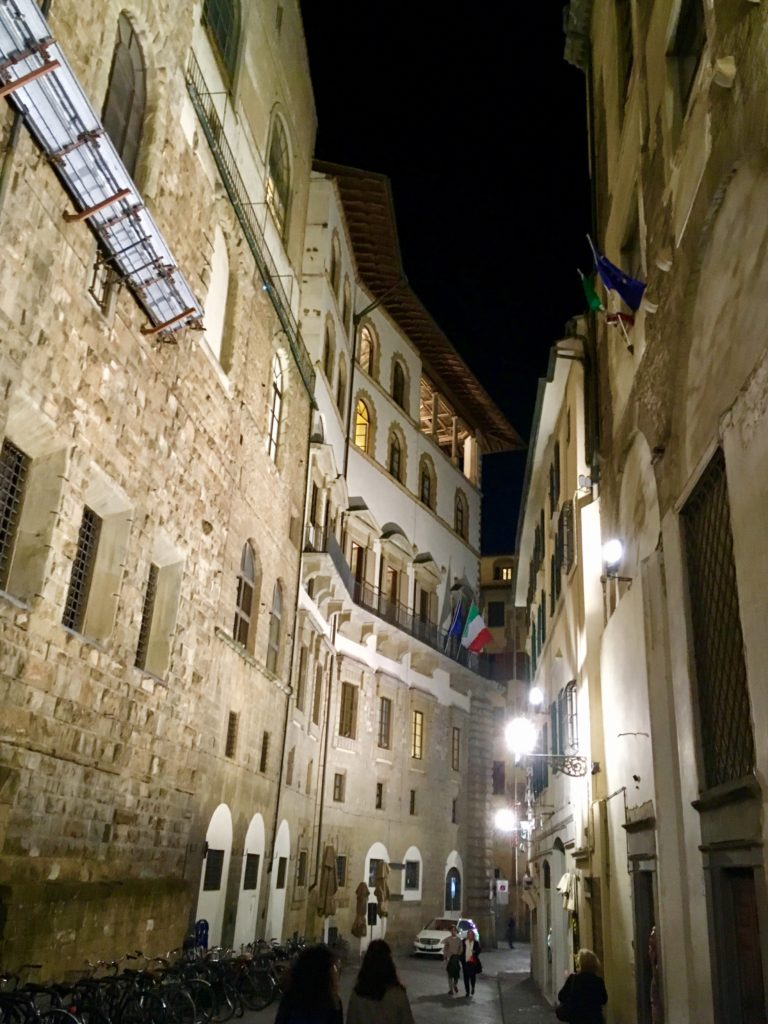 It was here that wooden fire risk roofs were replaced with brick and tile groined vaulted ones. These heavy ceilings and roofs often buckled the sides of structures under the pressure. This inspired the later use of flying buttresses in Gothic architecture that followed. 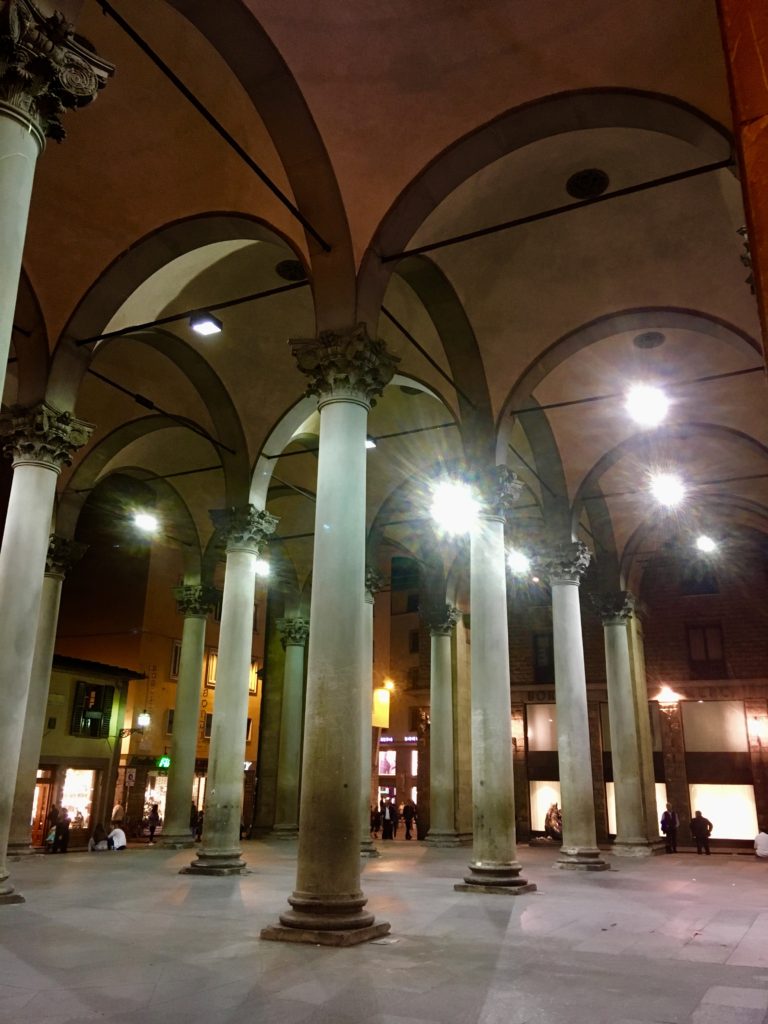 These vaulted ceilings are found all over Florence and here a wonderful market place sits below with a bronze masterpiece from 1634. The statue of Il Porcellino or Cinghiale. Piglet or Boar. 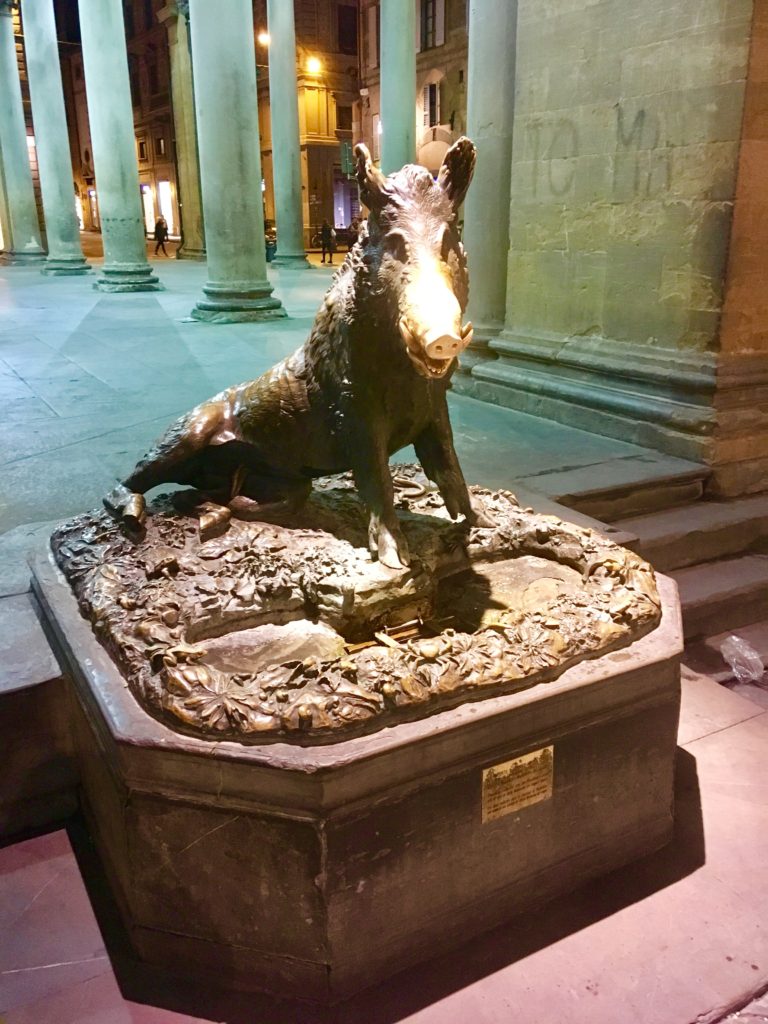 Sculpted by Pietro Tacca this pig replaced an earlier marble statue associated with the Calydonian Boar of Greek legend. The marble one was taken from Rome by the Medici family, yes them again. Nothing historic happened here without their fingers in the pie. Visitors place a coin in the pig’s mouth and rub his nose to be certain to return to Florence one day. This traditional offering of coin and nose buffing goes back a very long way. Scottish literary traveller Tobias Smollett noted it in 1766. If you’ve never read Smollett might I suggest you give him a try? He is so funny. From the shiny nosed pig of legend to the grimy sticky bearded pig of greed. 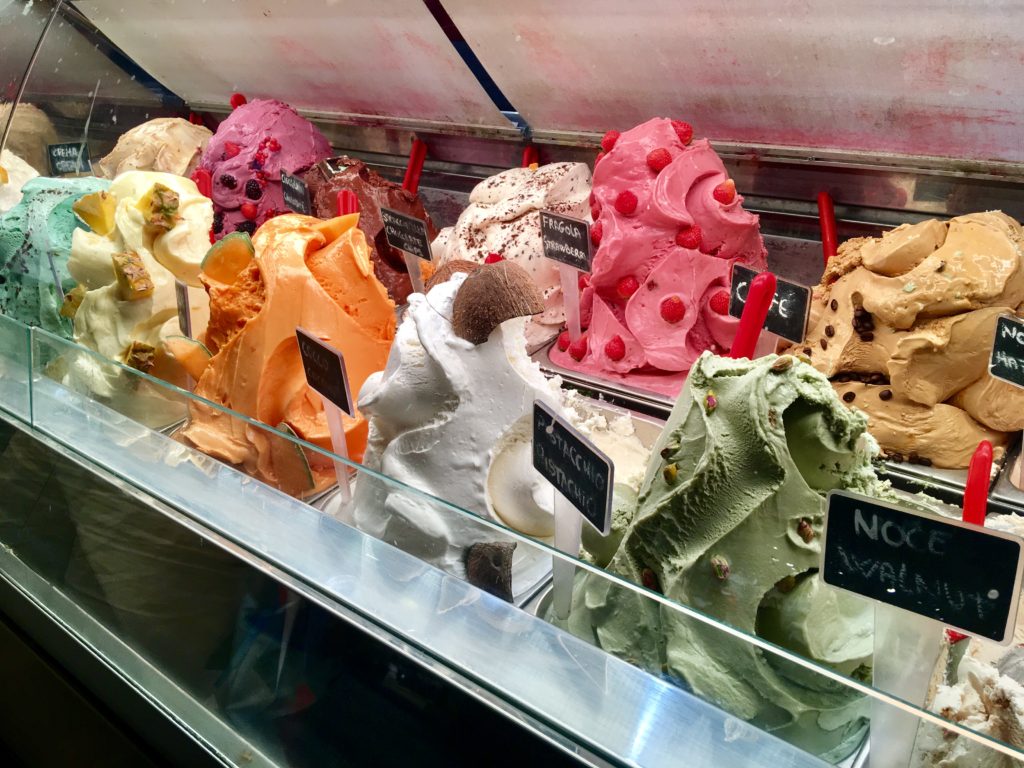 You cannot move in this city for gelato. There’s ice cream on sale almost every third shop. Here  at the Queen Victoria Restaurant the gelato is displayed in mountainous vast piles that attract crowds and crowds of piggy eyed greed filled customers like myself! 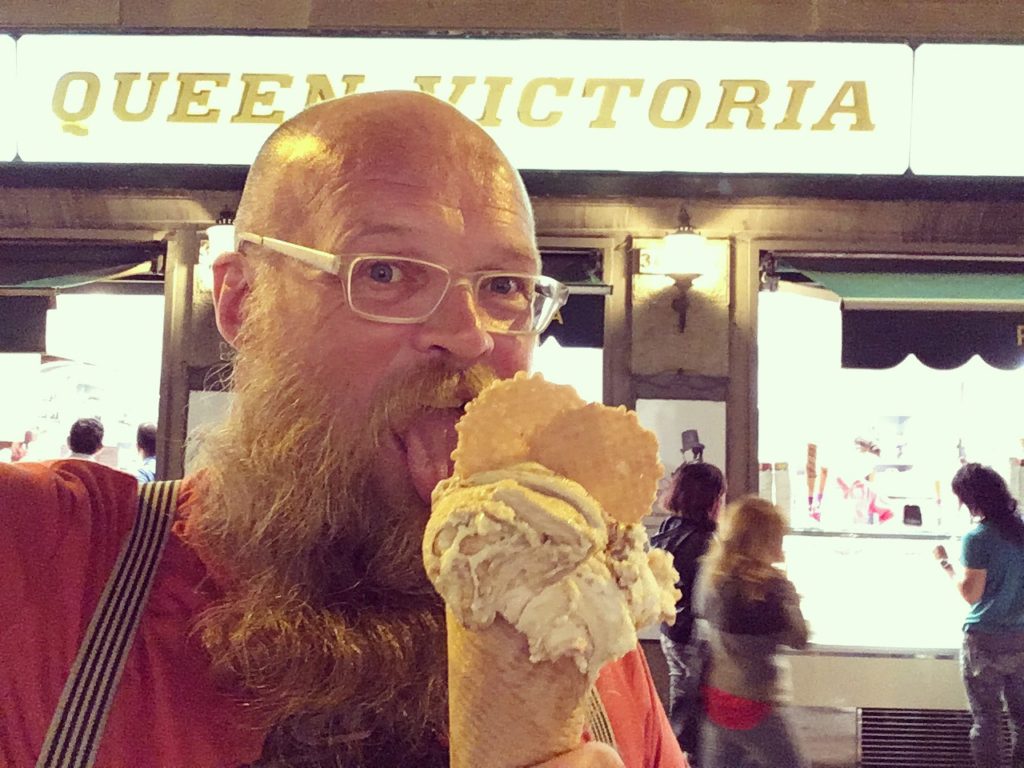 With diabetes now stalking me round the city I have to run in fear as I spot and wall of liquid chocolate at Venchi. It wants to take me down. 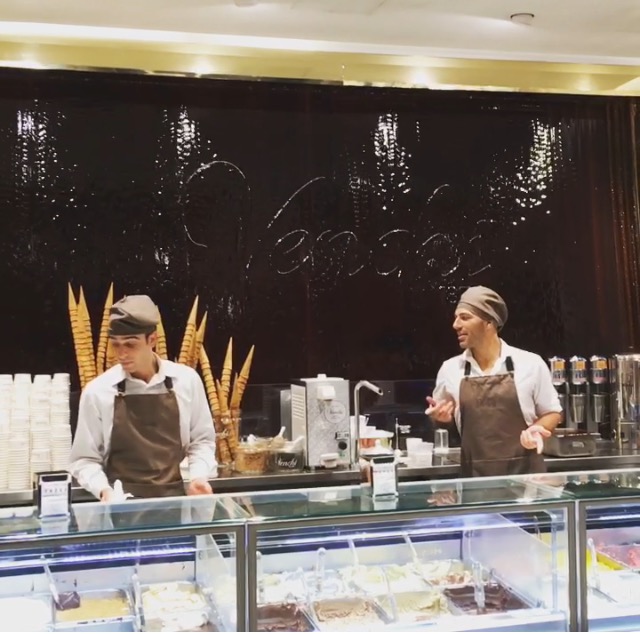 It honestly never takes me long to dig out a little of the coarser underbelly that every place has. I was highly amused by these places and they satisfy me that ordinary folk love a naughty joke. I just like to run them together to make things cruder. Naughty boy spoiling all the art around me with my childish crude observations. 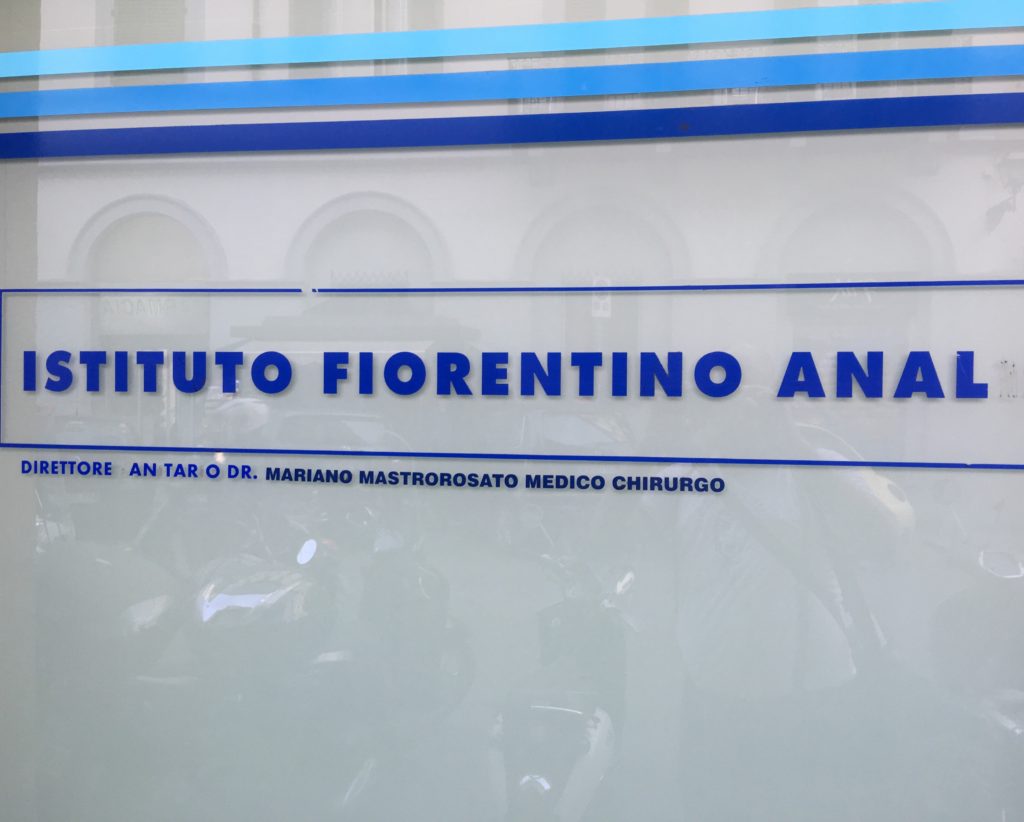 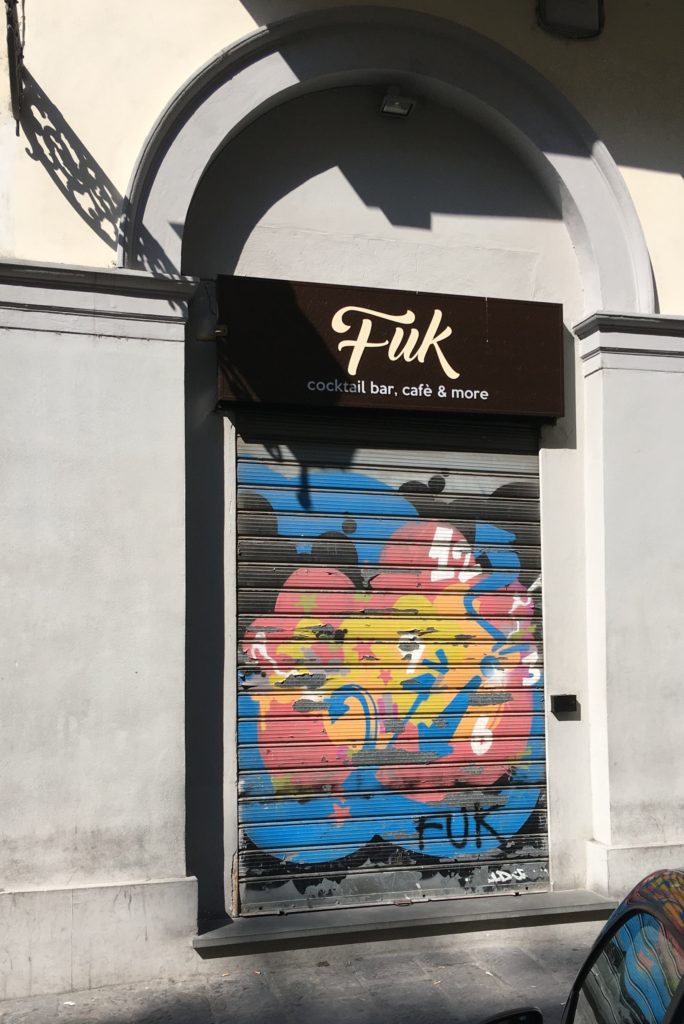 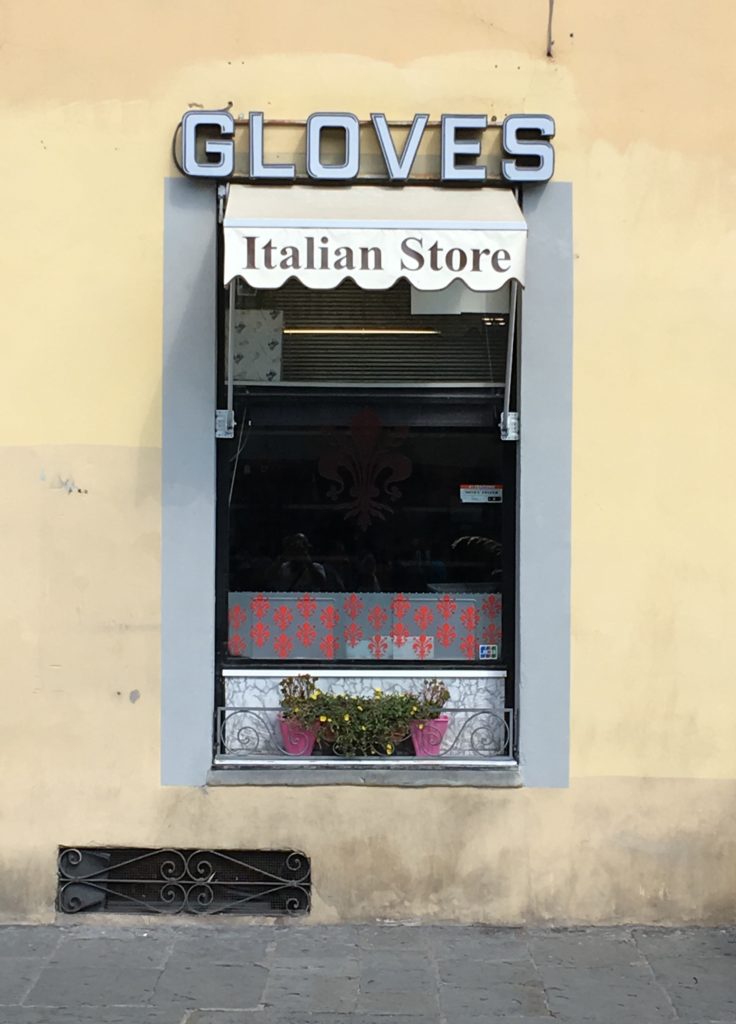 I’m so sorry Florence but I just can’t stop myself. You are a beautiful place and I have a bad saucy seaside mind. You didn’t deserve that.

2 Replies to “from nice dreamy hills to ice creamy thrills”