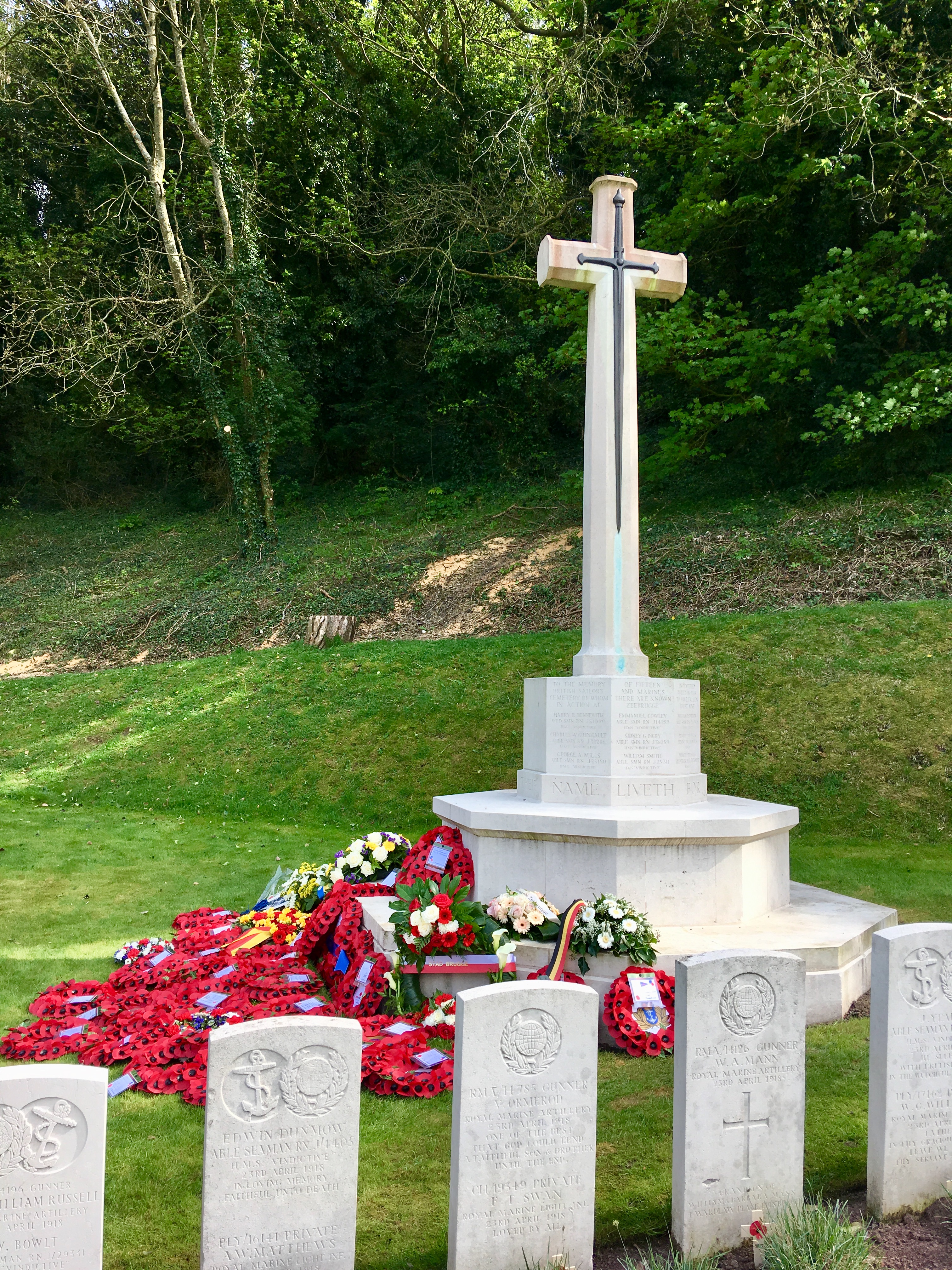 On 23rd April 1918 the Royal Navy attempted to block the Belgian port of Zeebrugge. The plan was to sink old ships in the entrance to the port to block German vessels, especially U-boats from leaving. For over a year the Allied troops had been attempting to gain control of the English Channel and southern North Sea. All attempts at bombardment had so far failed. An earlier attempt of the 2nd of April was called off after the wind changed direction. So the date was moved and plans to attack Ostend and Zeebrugge were mounted. The old cruiser Vindictive and two Mersey ferries, the Daffodil and the Iris III and two old submarines filled with explosives were to be sailed into the narrowest part of the port and exploded and sunk. The Vindictive was to land 200 sailors and a battalion of Royal Marines to destroy the Imperial German Navy guns. Sadly as they reached their target the wind again changed direction and the smokescreen meant to hide them cleared. The loss of Allied lives was large. 400 were wounded and 200 killed compared to just 8 German losses and just 16 wounded. British propaganda hailed the attempt a victory but after a few days the Germans were able to continue using the port. Though with a change of tactics the Germans stopped using the port so perhaps there was some truth to the victory. 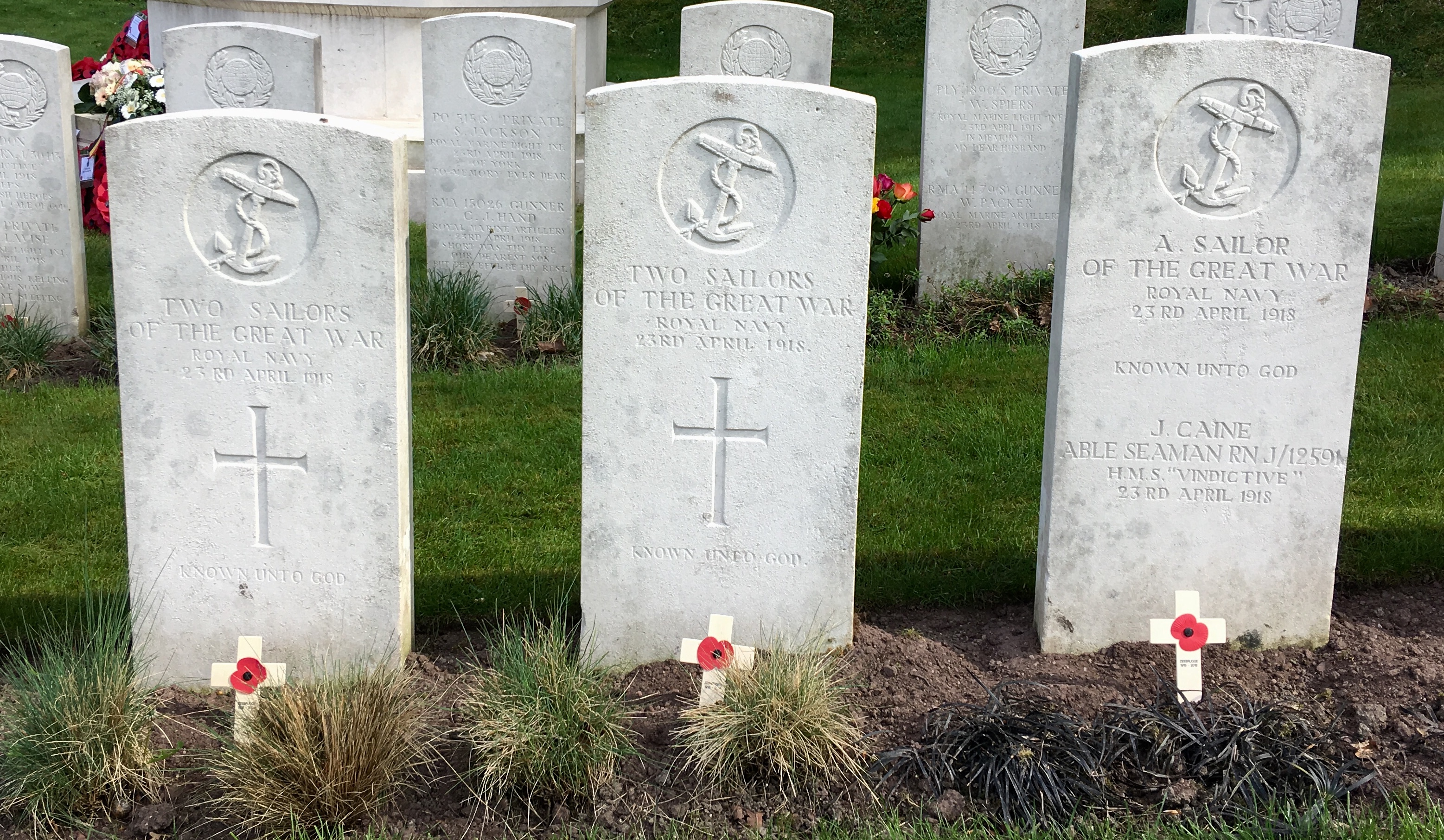 Many of the dead including 9 unnamed servicemen are buried in St. James’ cemetery in Dover. Here are three of the ‘known unto God’ graves. This year marks the 100th anniversary of the tragic event in which so many died. 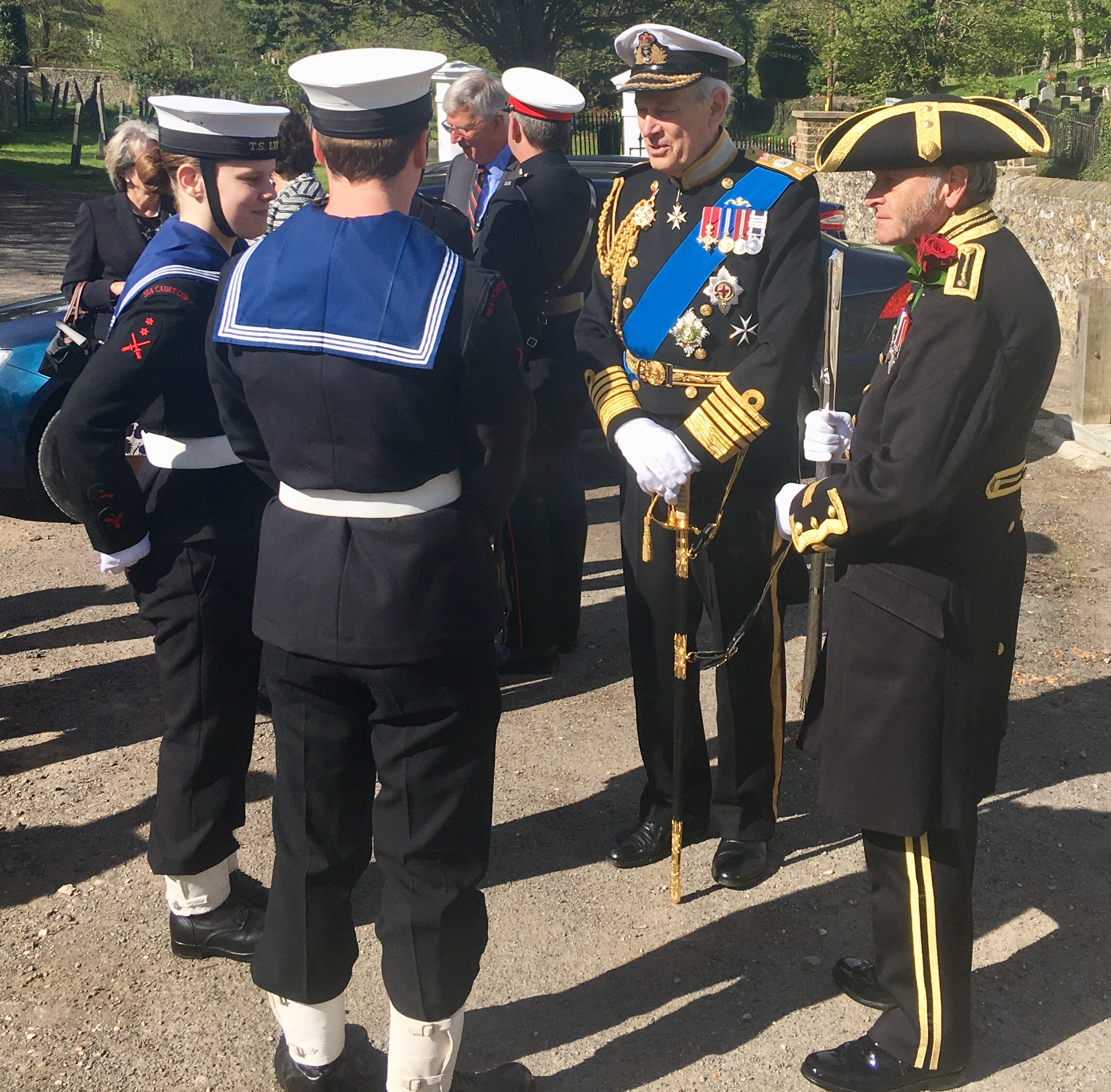 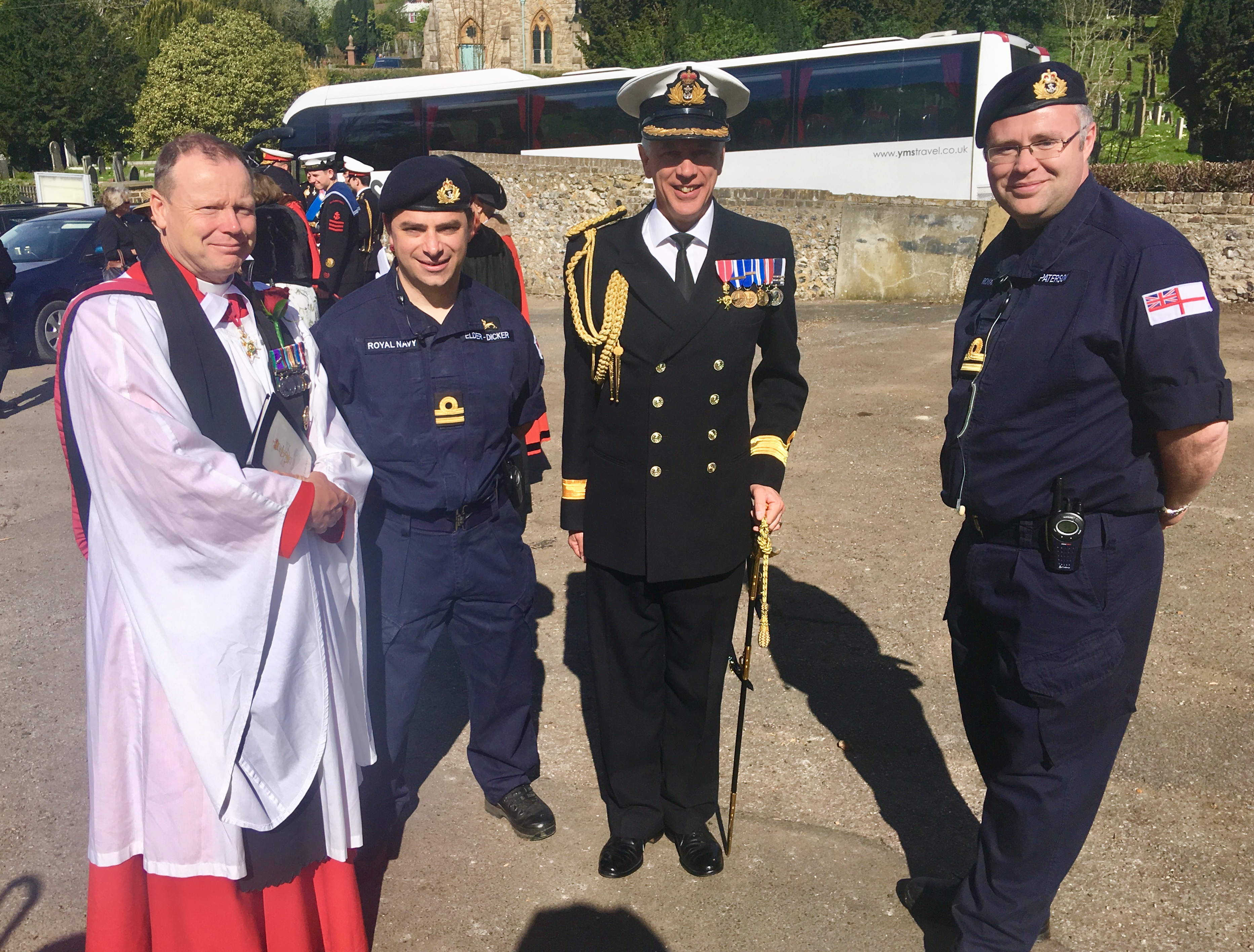 All morning members of the Navy have been gathering along with the clergy, judiciary and mayors both past and present to pay their respects at the cross marking the graves of the fallen at Zeebrugge. 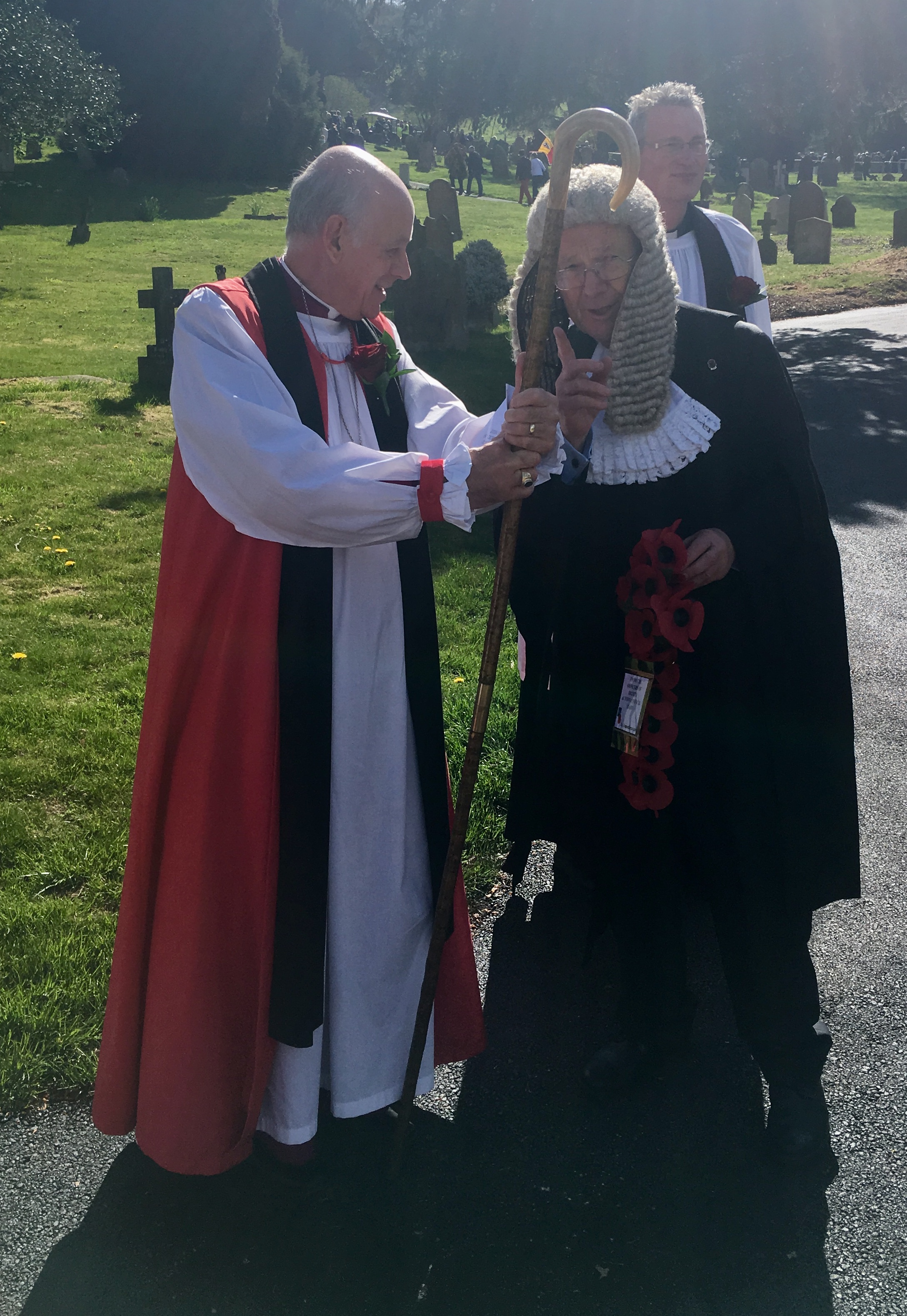 The wonderful former female mayors were great to chat with. Especially as there was more than just one of them. All day I saw much female representation in what 100 years ago was  a male only arena. 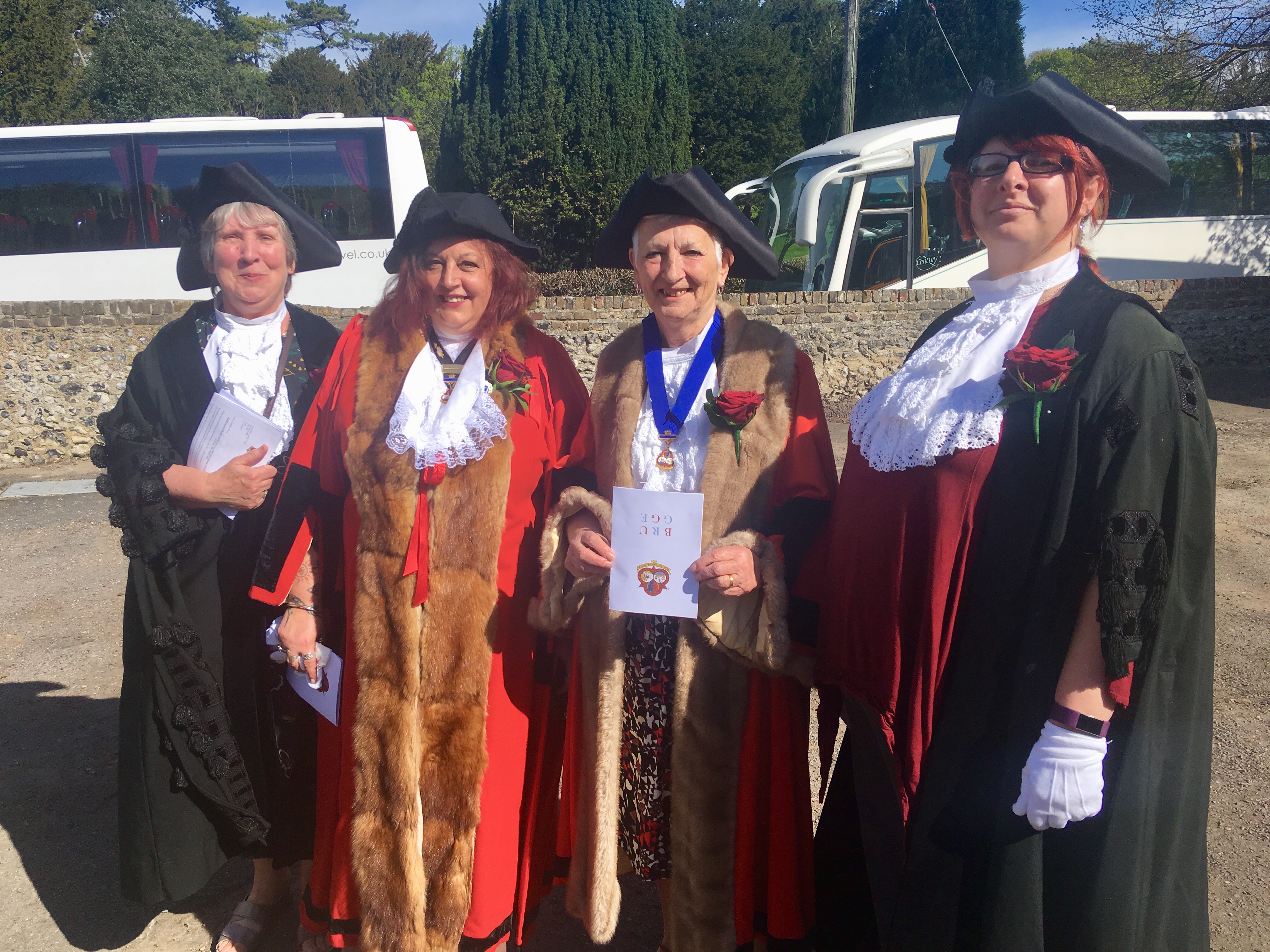 Then the standard bearers began to also gather. They are not flags! I did make that ignorant error but the kind bearers sweetly corrected me and since I love learning I was happy to be gently scalded. 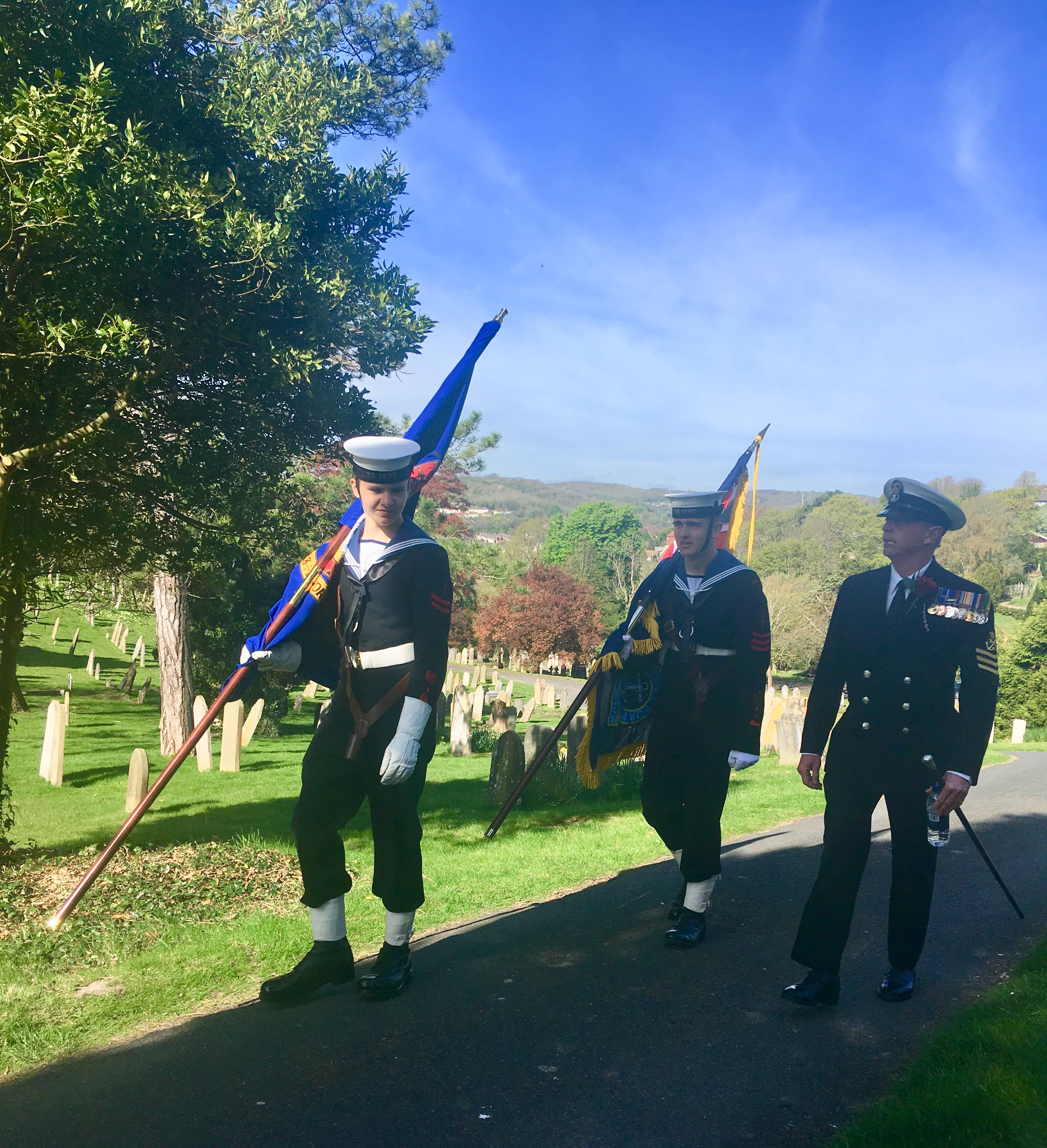 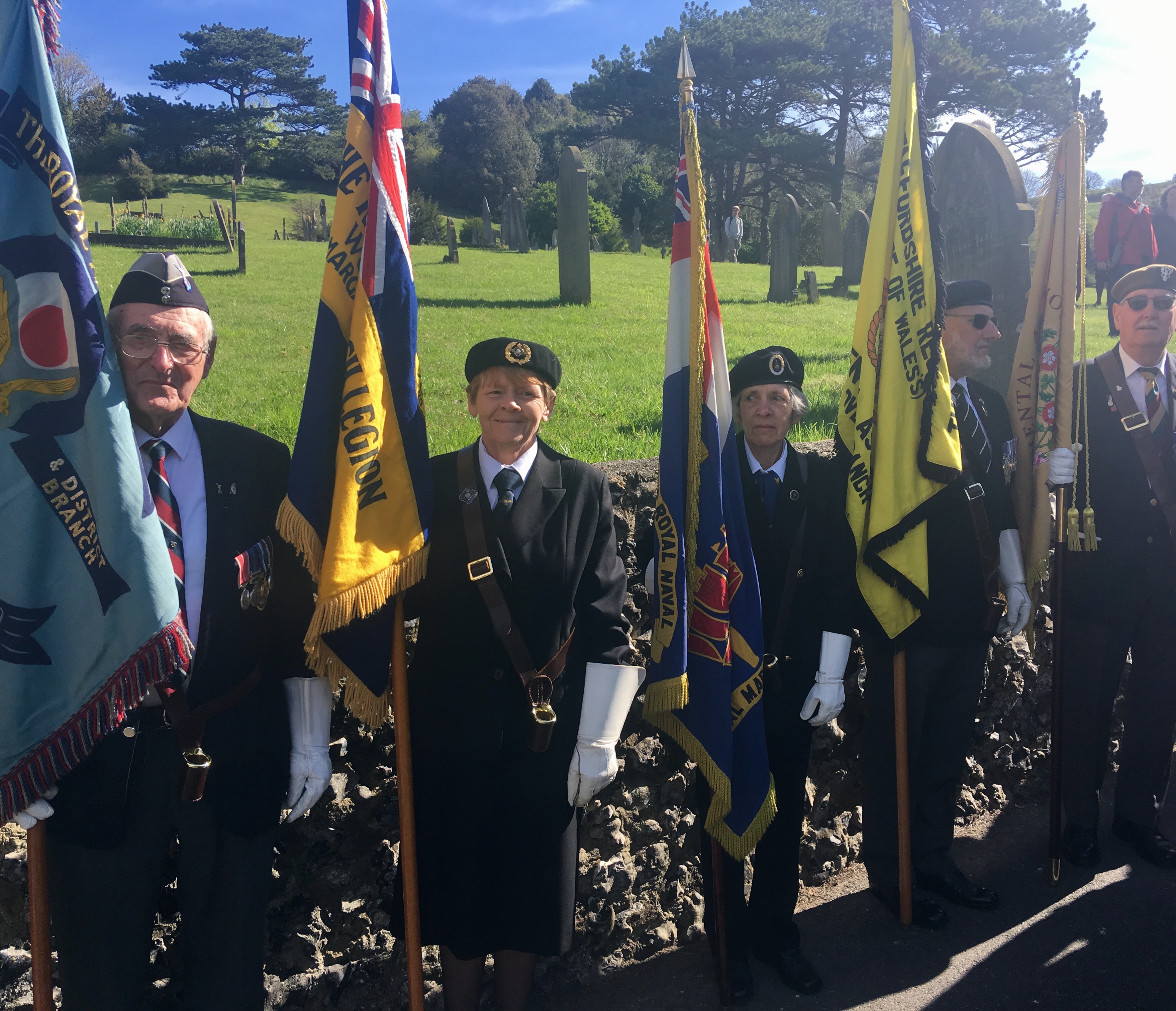 This service began and poppies and flowers were laid in honour of the dead. The Band of the  Marines provided music and hymns for the proceedings. Then it was onto waiting coaches to head to Market Square for a parade up the High Street to the Maison Dieu, Dover Town Hall. 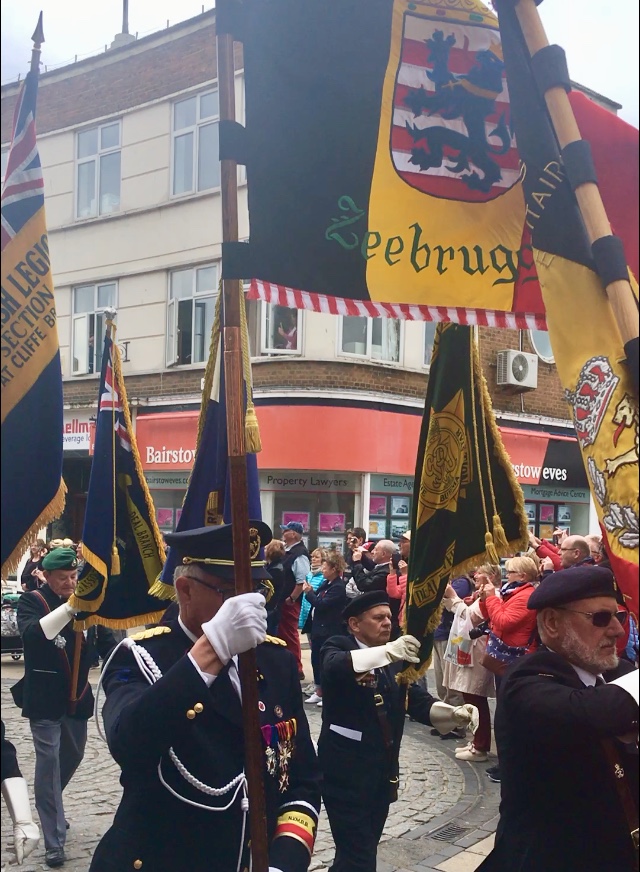 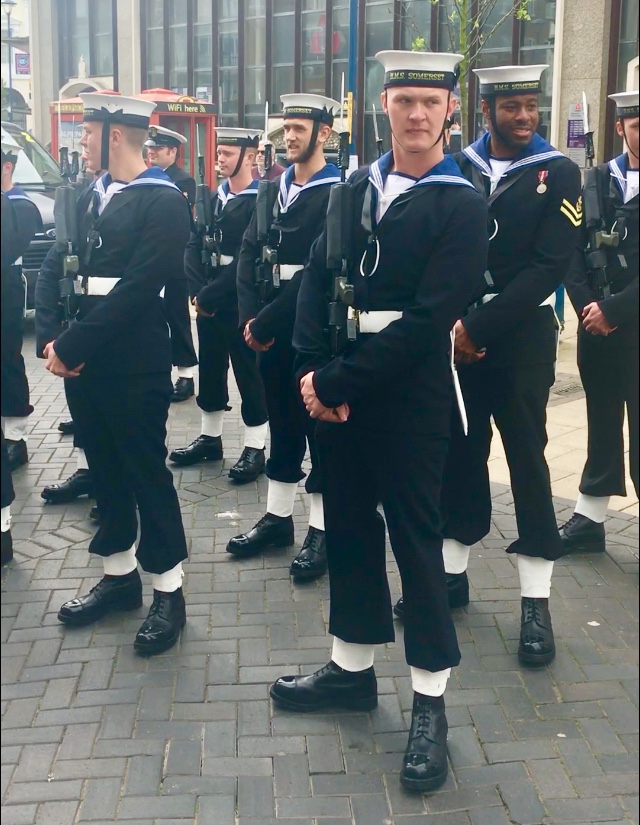 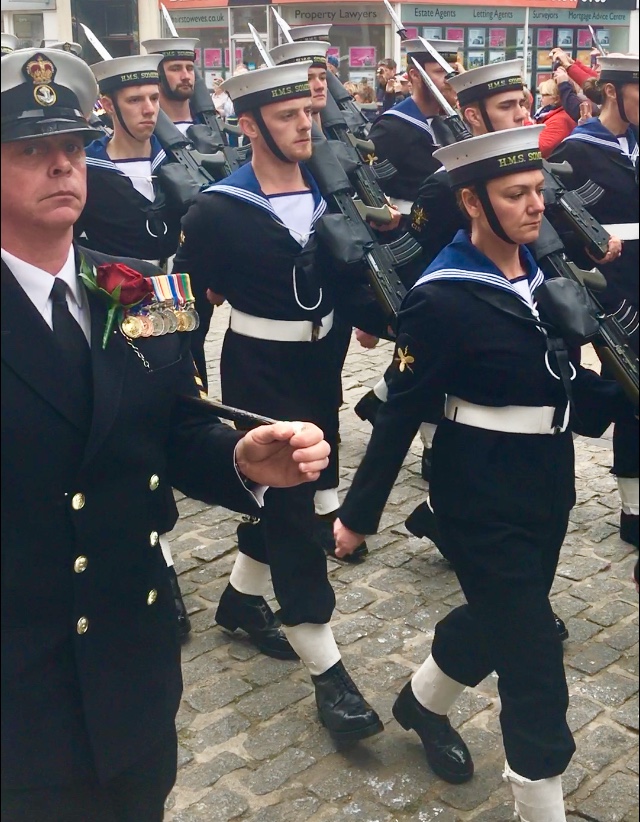 Look at the women on parade too now. 100 years since some women were allowed to vote and not only are women in the forces but they have medals too. 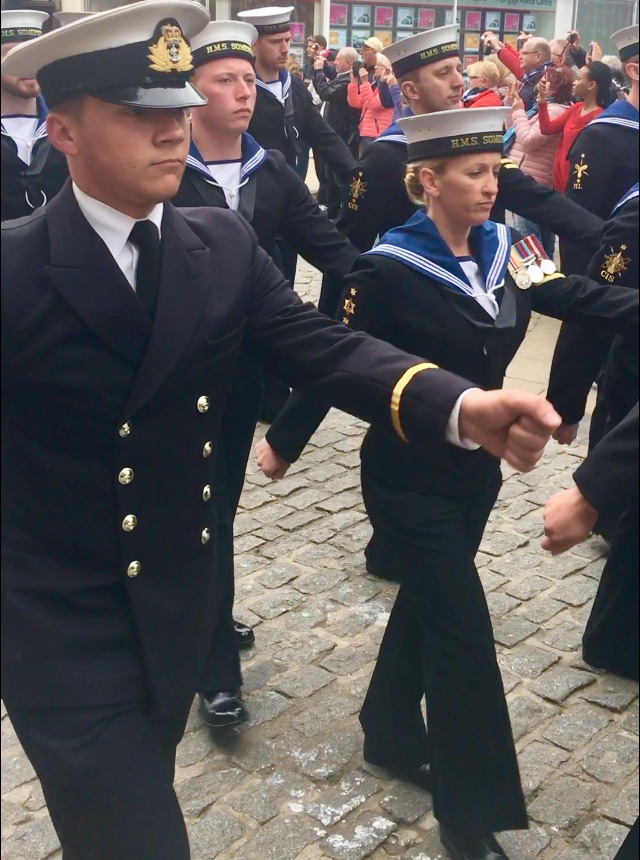 Many roads are closed for the parade and all litter bins are sealed to protect the parade. I guess the bombing in 1989 of Deal Barracks casts a long shadow still. I remember this very well as my music teacher at school wanted me to join the Marines and I always remember thinking that I would have been there with friends who were involved. 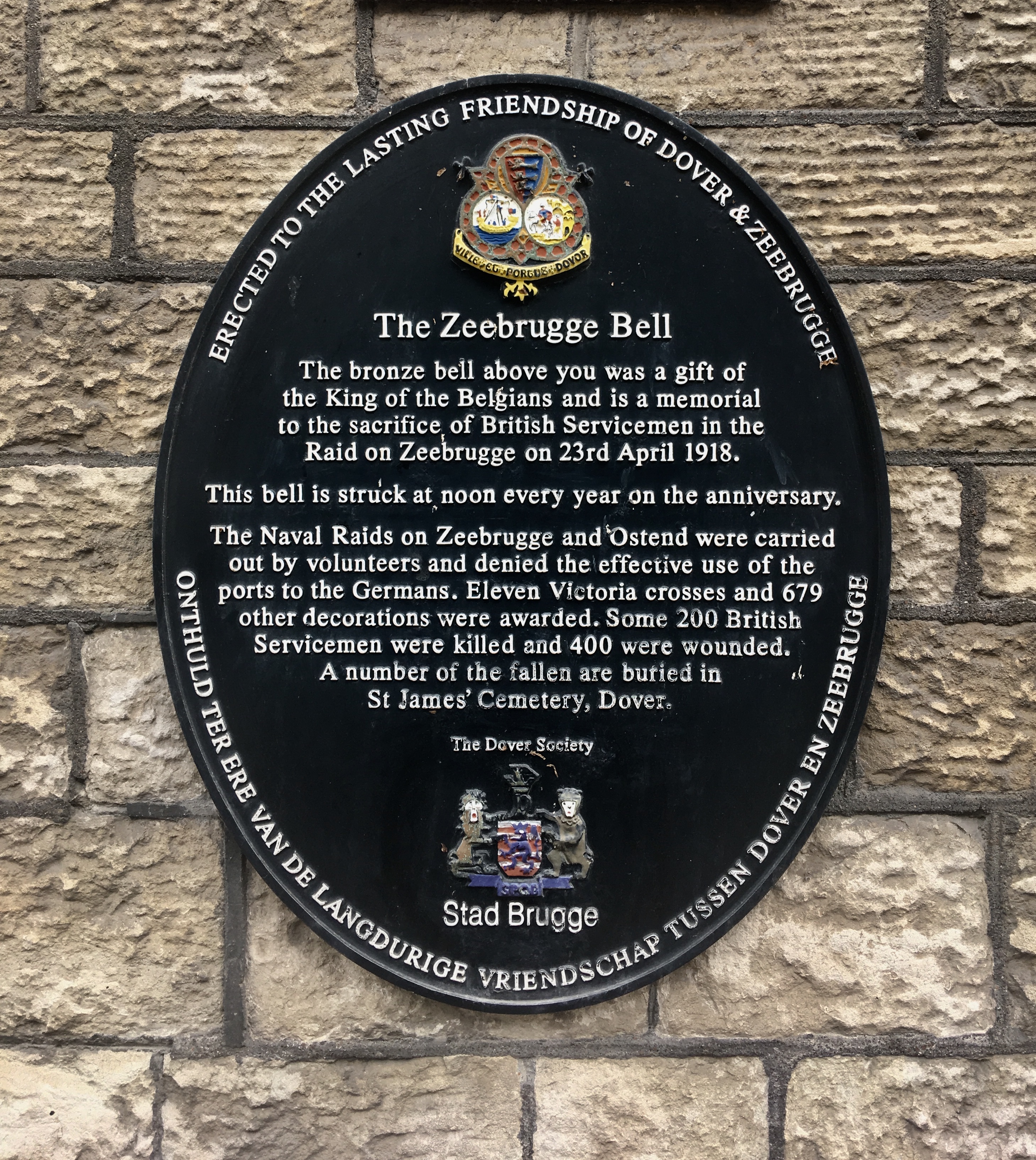 The King of Belgium gifted Dover with a bell which is rung 8 times on the anniversary of the raid each year. And as the crowds gather and a service is spoken from the large balcony it is brought to an end with a solo trumpet sounding the Last Post. 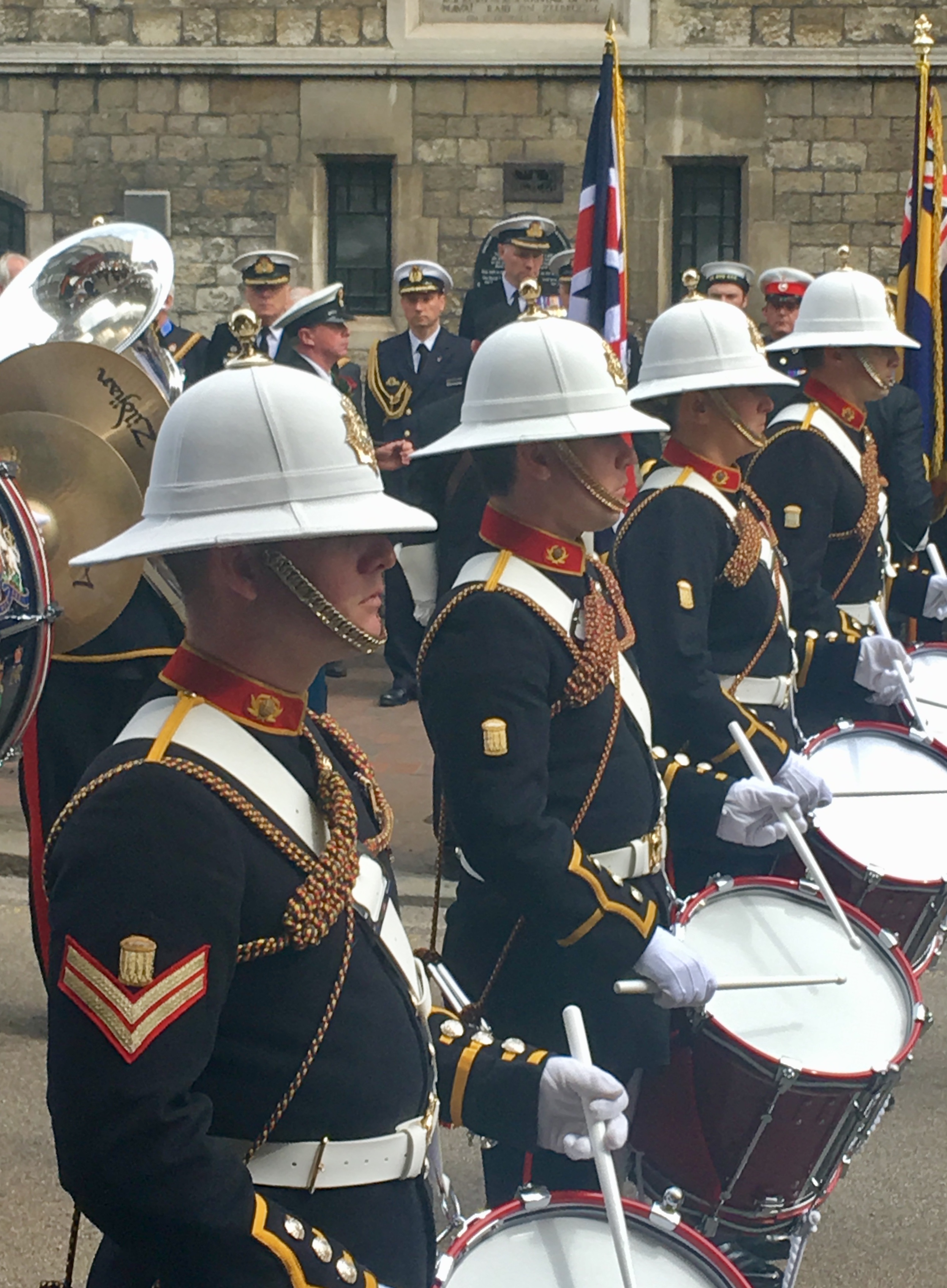 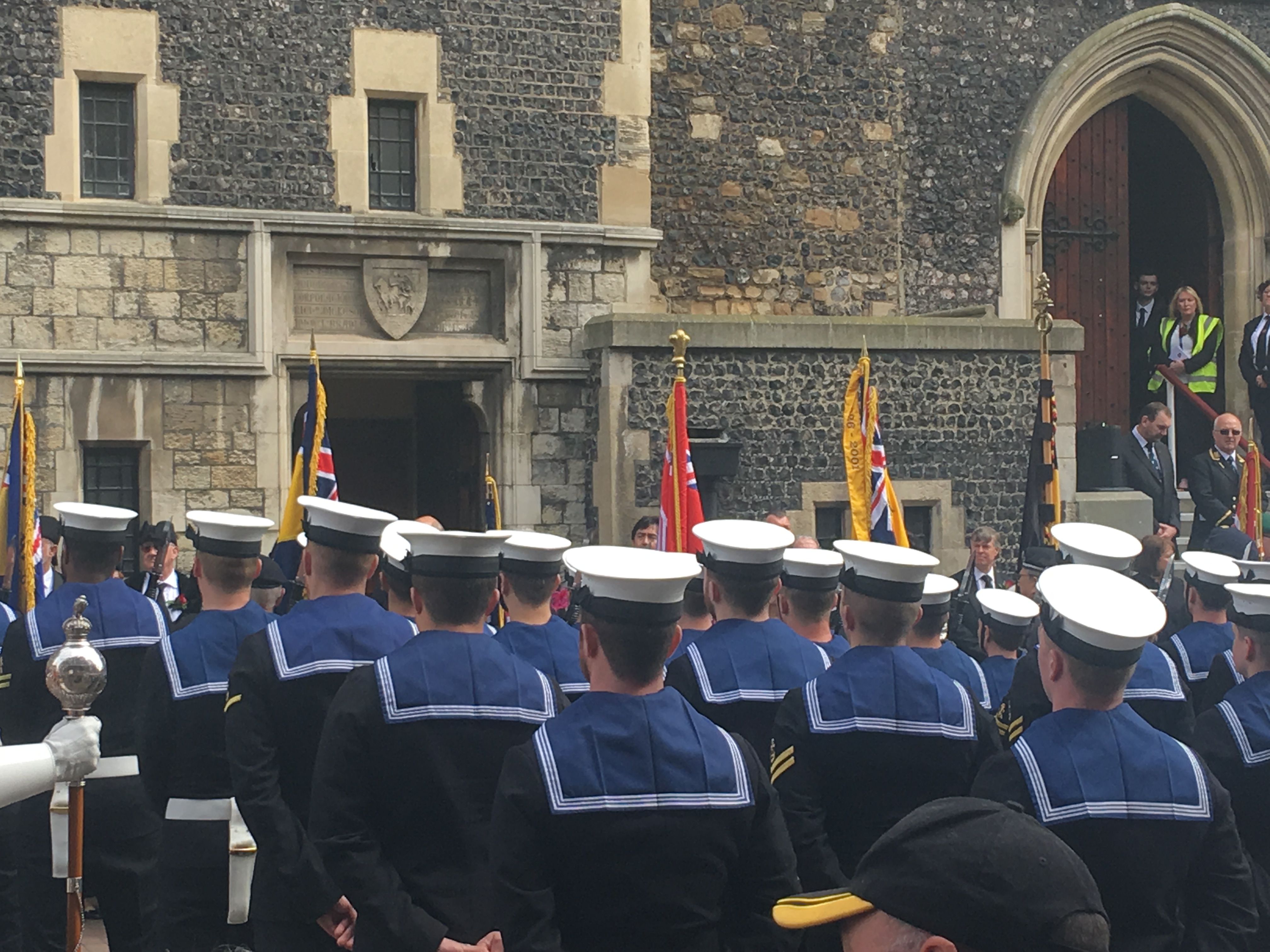 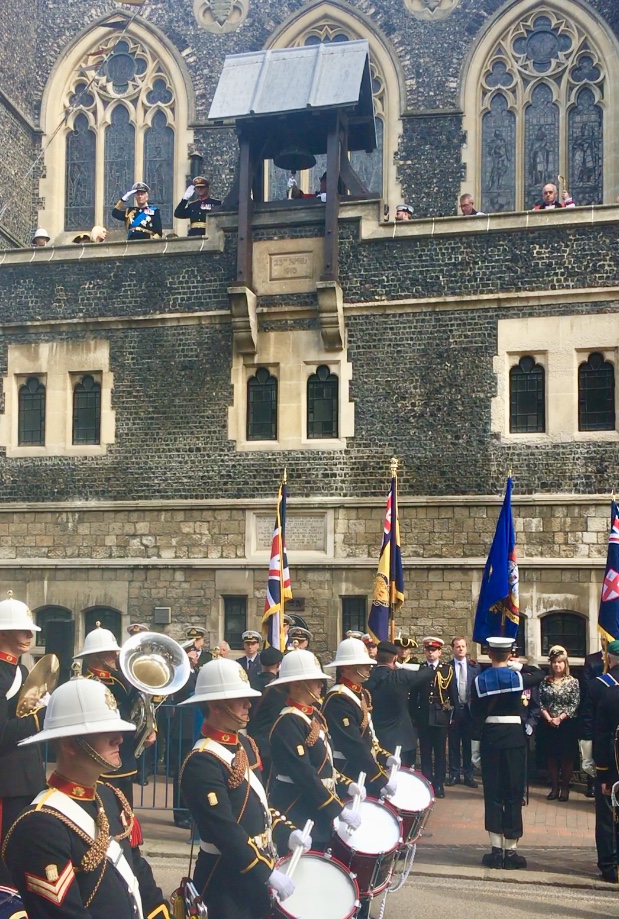 Since I was very young I always avoided knowledge of the two World Wars. When we first had to learn about it in junior school aged about 7, I was horrified. To my eternal shame I remember thinking that if the Nazis came back I would be ok as I had blond hair and blue eyes. What children do to comfort themselves from frightening information is truly bizarre. I remained horrified by this history lesson for many months. Then I spent my life trying to avoid learning about either war. When the UK went to war over the Falklands I was ashamed to be British. I grew up believing that wars were over and that I was part of a future peaceful generation. How wrong I was. We continue to meddle and warmonger. We sell arms to create division and tensions among nations and when it suits our politicians we attack and bomb nations to suit our own ends. Live is precious and I wish we could all remember this and strive to live in peace. 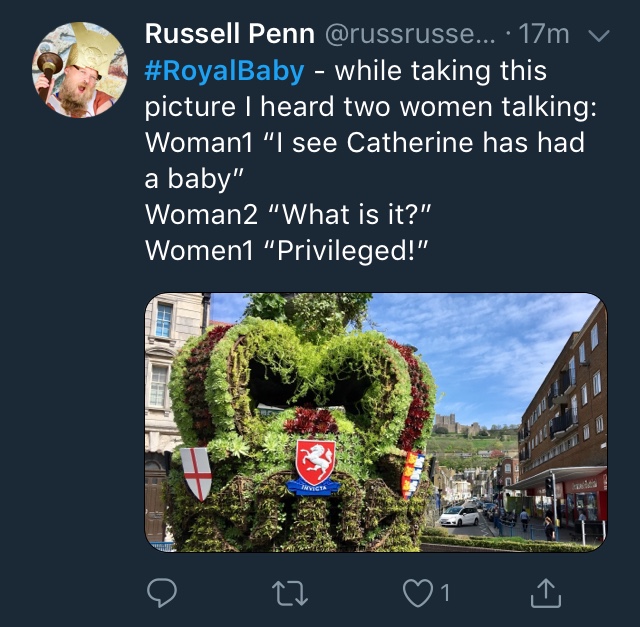 I include this tweet of a conversation I heard while taking a photo in the Market Square as it made me laugh. It was great to follow this memorial today. It was also good to stop and learn about the raid on Zeebrugge. My one issue that I have with this today is nothing to do with the parade or the Navy but our Government. The constant cuts to funding throughout the UK and here in Dover meant that while there was time to rightly honour the dead they do little to honour the living. Directly behind me lay a homeless man who was trying to sleep in a doorway but people wandering around to watch the parade kept stepping on him. Dover needs funding. Britain needs funding. We need social housing. So today, St. George’s Day please let’s try and help those less able than ourselves. Let’s build a better world for all. 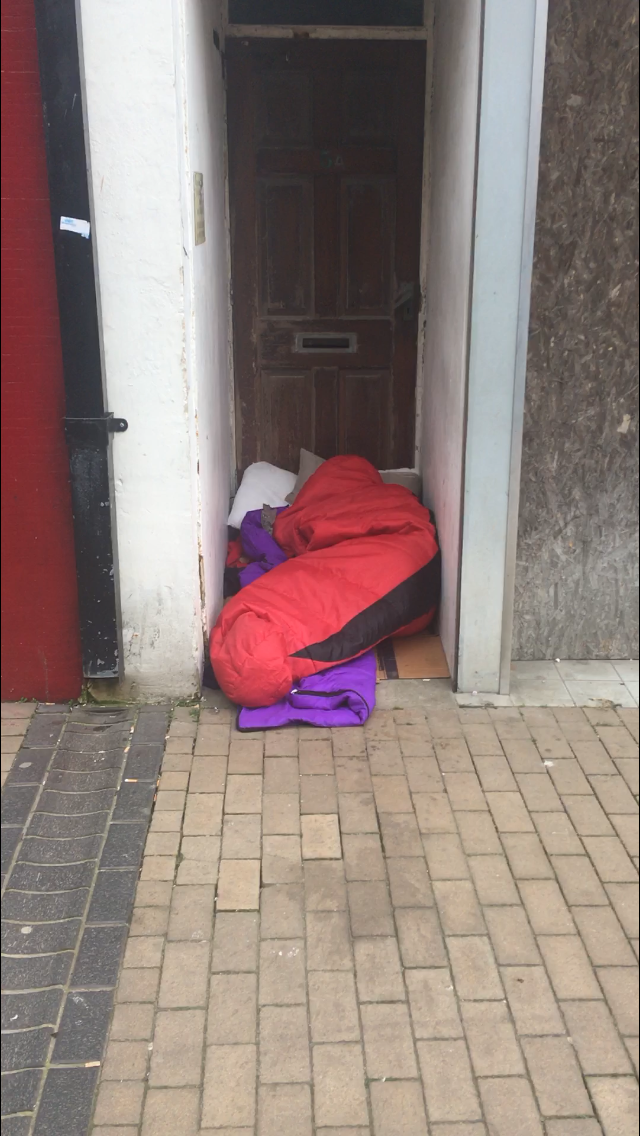 Apologies for the oil on my camera lens. It’s left a sheen on many photos.