I’ve rocked up in Lyon to visit La Fête des Lumières. I’ve never been to Lyon before but I know a couple of things about it already. It has a Festival of Lights in December and it is considered the gastronomical capitol of the world. Well not that I like to debunk things but I do like to be a little rational when it comes to gold claims. I’m pretty certain that there are many countries all over the world with totally excellent but also totally different cuisines who might argue that their food is better. So supposing we reduce the claim to Europe I still think that Spain or Italy might want to argue with the claim of being the best. So I think it would be better to say according to the French it is the “capital gourmande”. This claim comes entirely from the Chef Paul Bocuse. The 91 year old Lyon based god like chef of nouvelle cuisine which is less rich and calorific than the cuisine classique. He claims that the term was first used to describe the food prepared for the maiden flight of Concorde in 1969 . 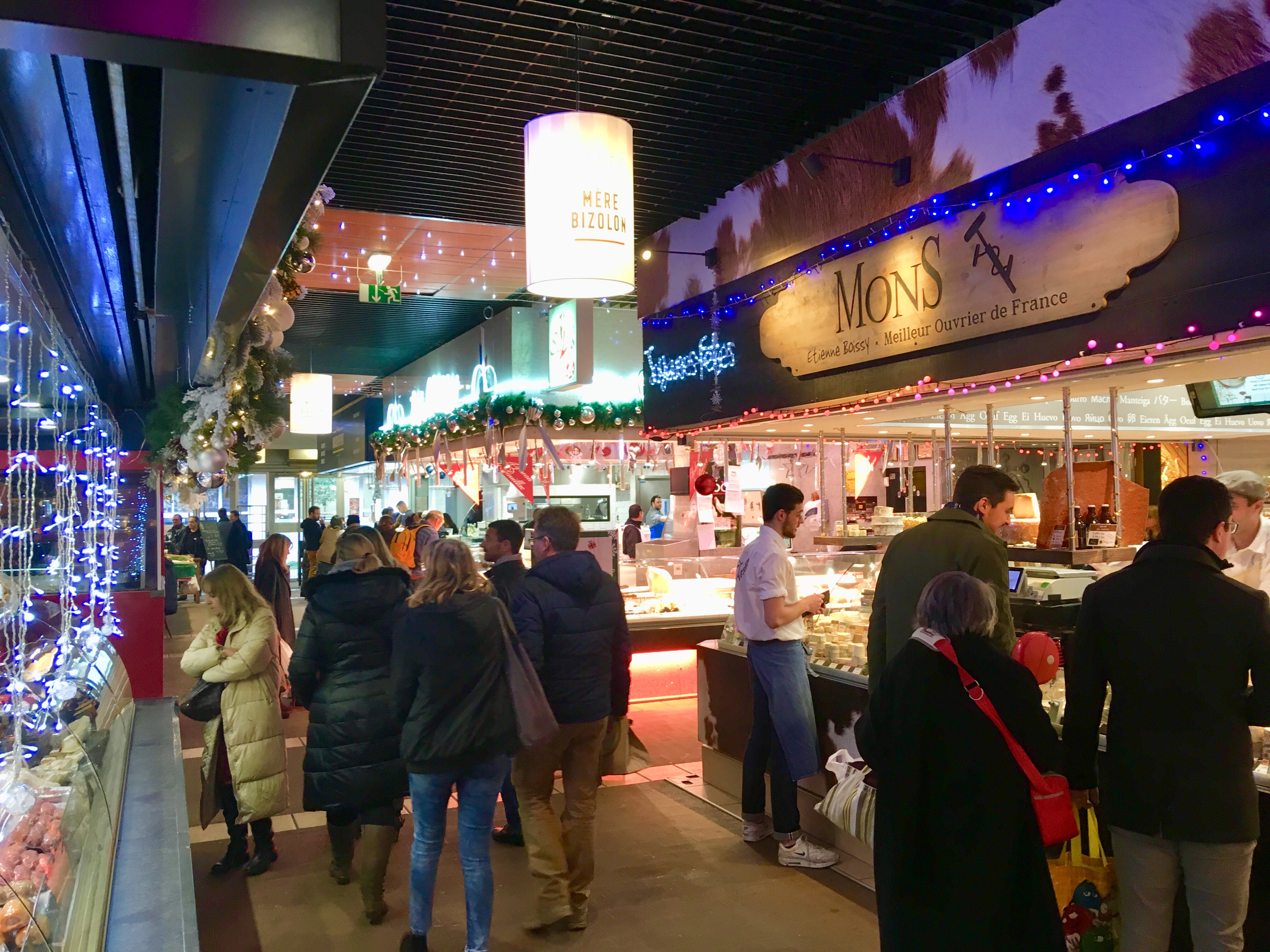 His very famous food-hall in Lyon, Les Halles de Lyon Paul Bocuse uses his name to guarantee the customers keep coming and are justified in paying the very high prices. But it must be said everything inside really is of the highest quality and the place is awash with Local Lyonesses toasting each other’s good health and swallowing back mountains of fresh oysters served on special circular mounted high silver platters of ice and lemon wedges. 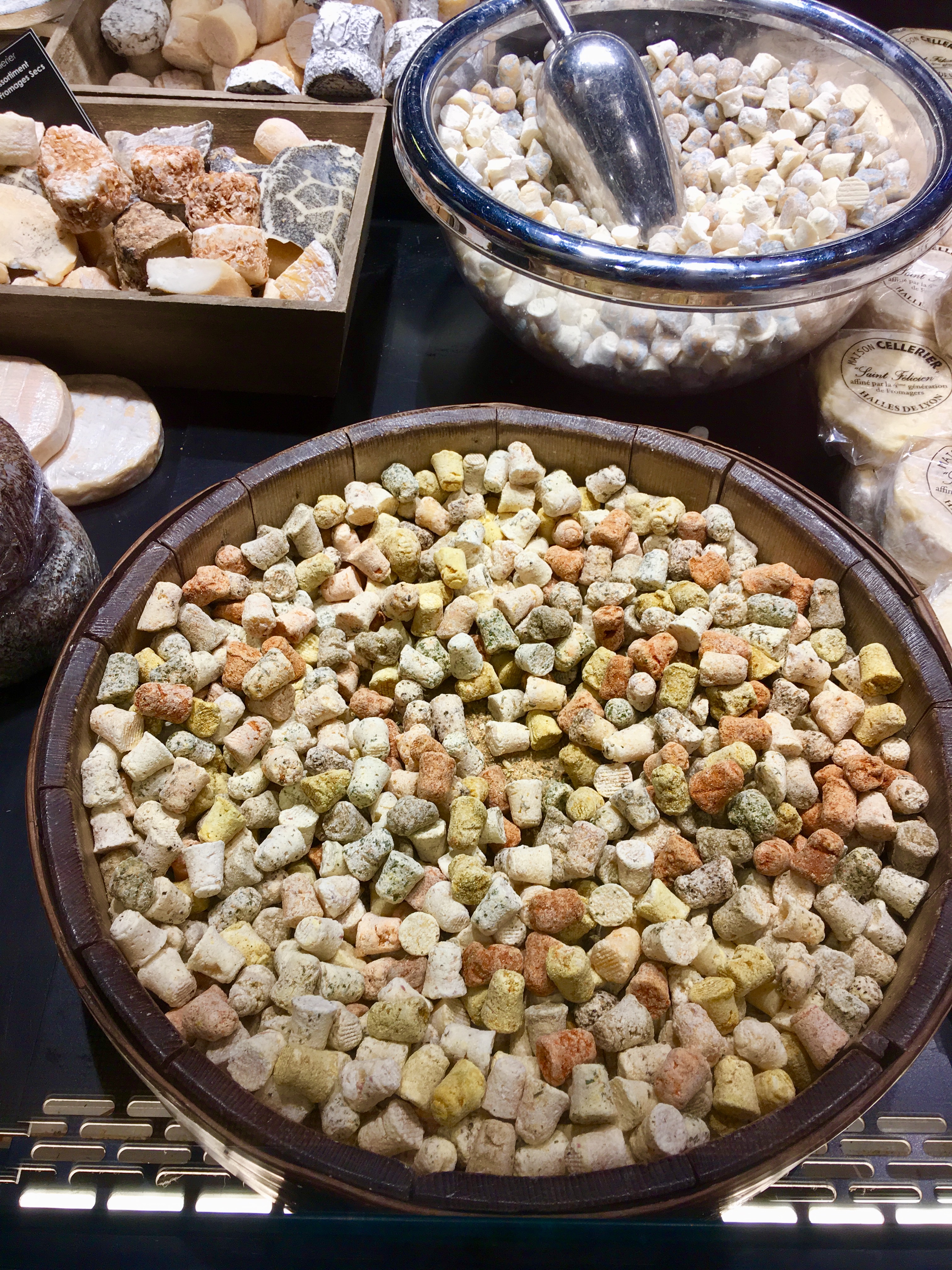 I was here for cheese, cheese and more cheese. So I settled on Maison Cellerier as they sold a rather unique cheese that I wanted to try. Buttons of cheese to nibble with an aperitifand a choice of vache ou chèvre. Cow or goat. This led to the discovery of the many rows of tiny local cheeses that were all different In shapes and productions, milk origins and storage and ripening. 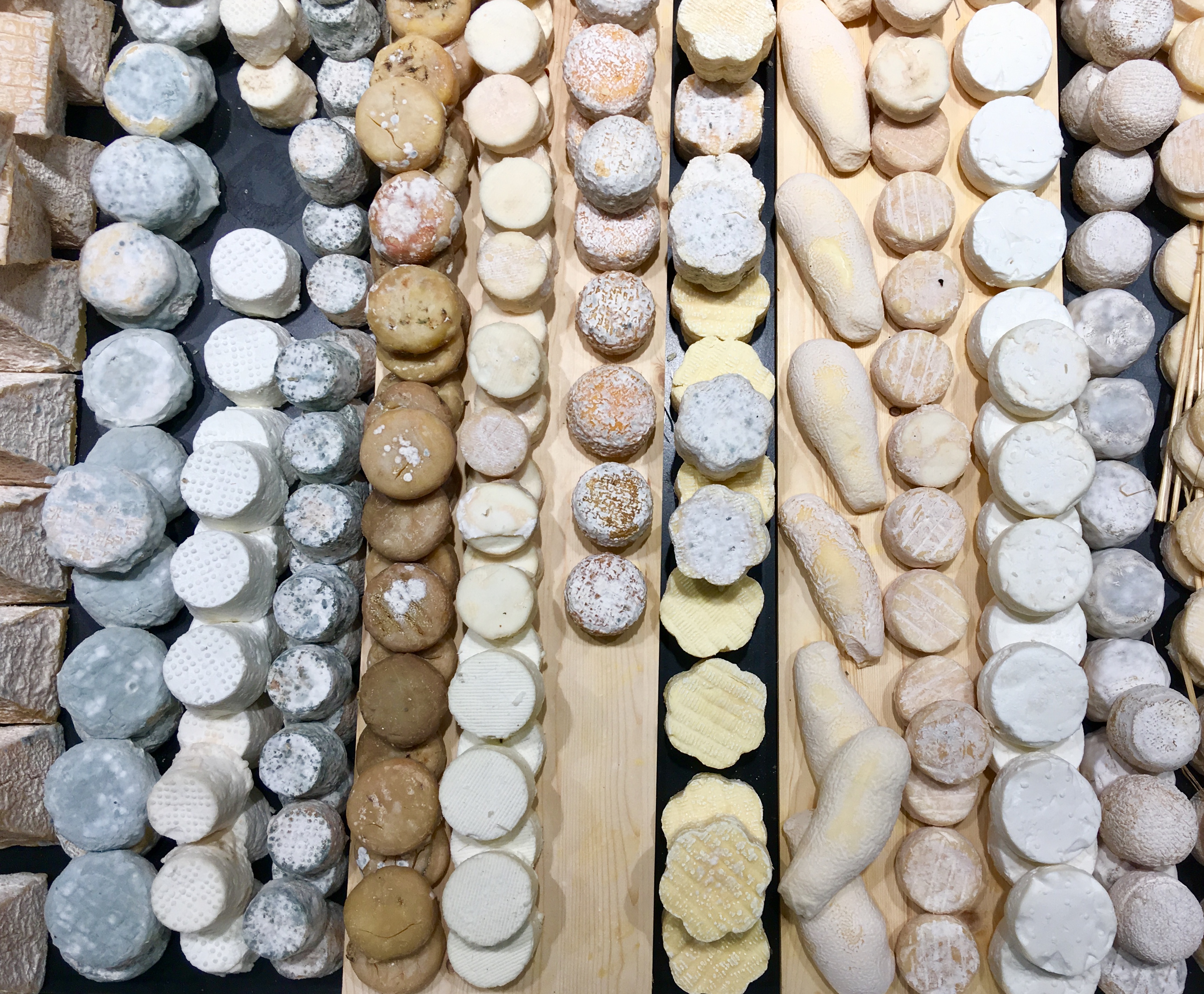 A poor knowledge of French ‘ahem!’ does not serve you well in this place of specialised knowledge. However a little light swooning and flirting with the dashing grey haired owner/manager certainly helps to make the experience a total joy for me. The only problem with having a fluttering pulse might be the observing of plate glass doors! Bomp!! Ouch. I would love to return to go out for a meal with him.  Le Roi de Fromage would certainly know some mighty fine places to eat. I’d also like to learn more about the secrets  of cheese making. I always wish as part of my blogging that I could go visit places where the finest foods are produced and see how they create the magic. 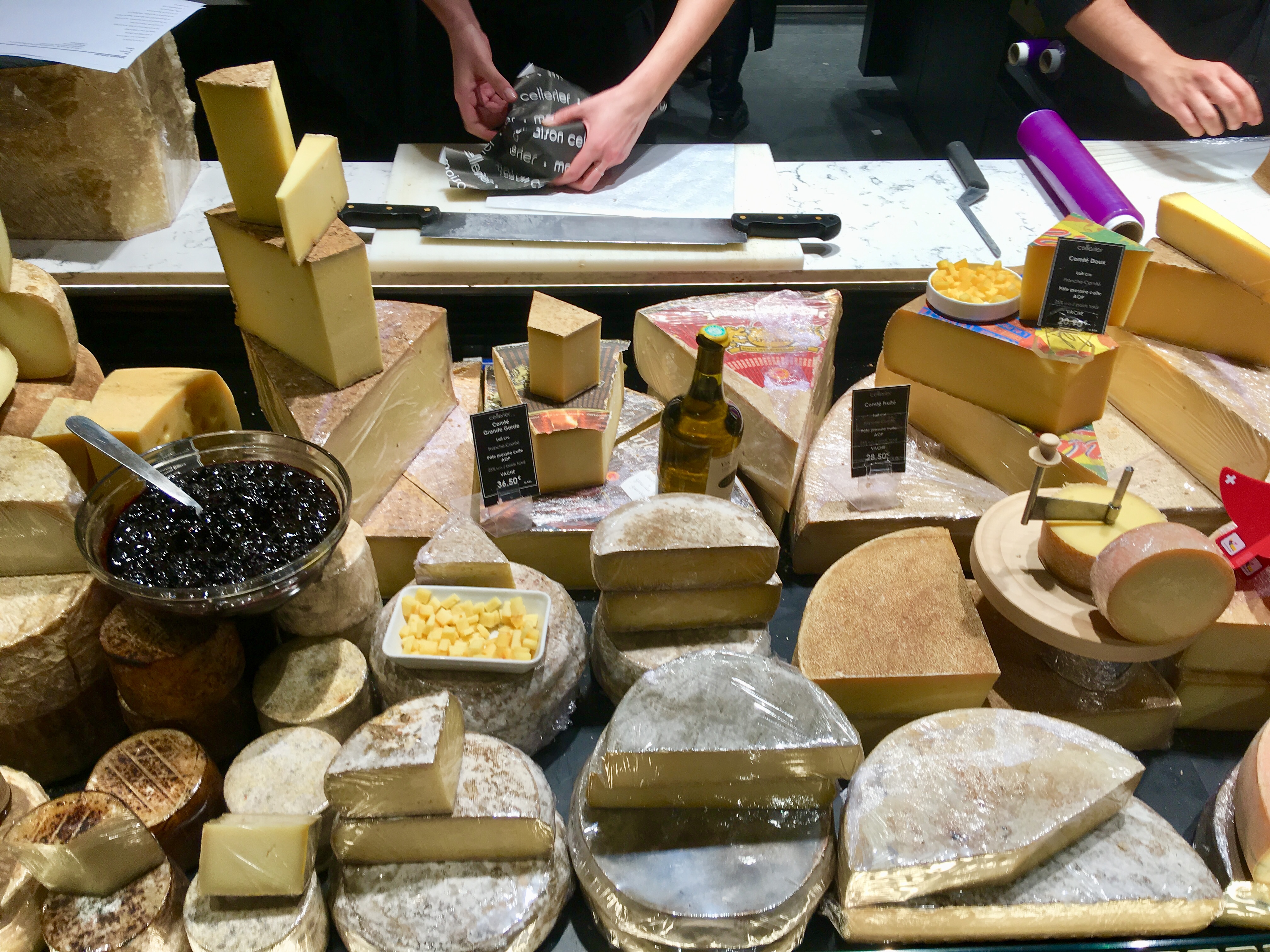 Ever the ambassador for British cheese I showed him the Alsop and Walker website, my personal favourite UK cheese makers from Sussex. Obviously I couldn’t leave here without Macarons and Marrons Glacée too. 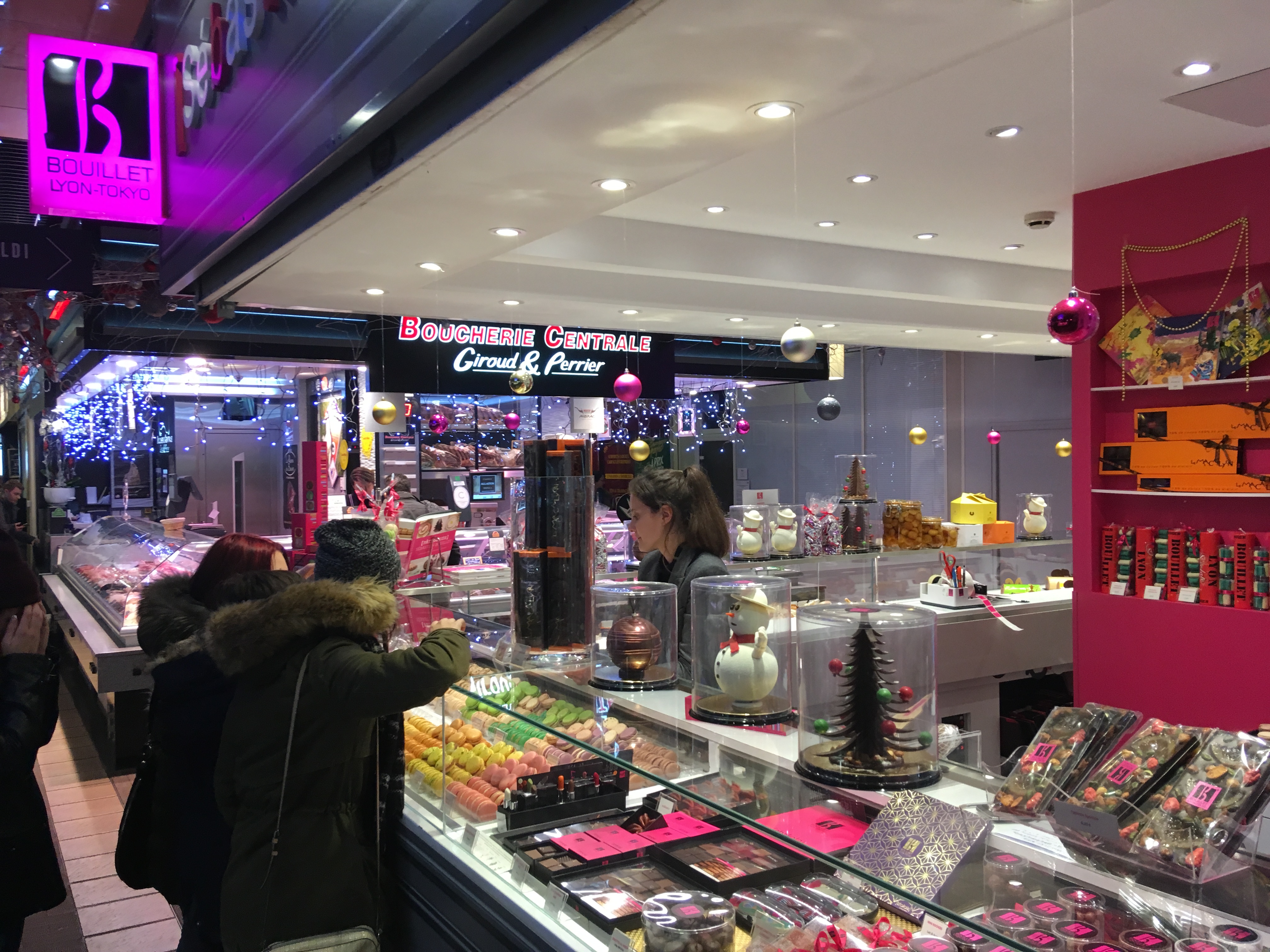 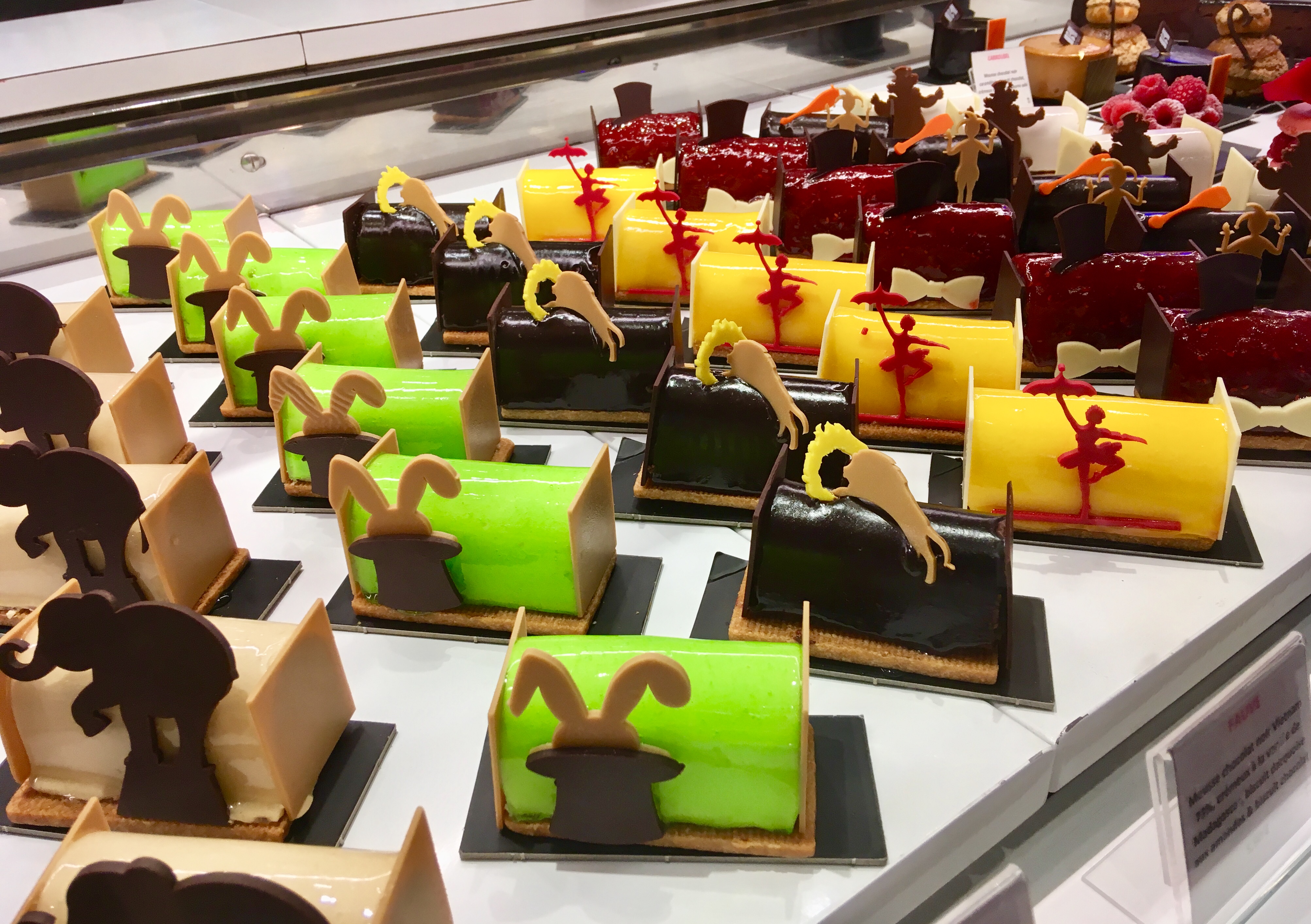 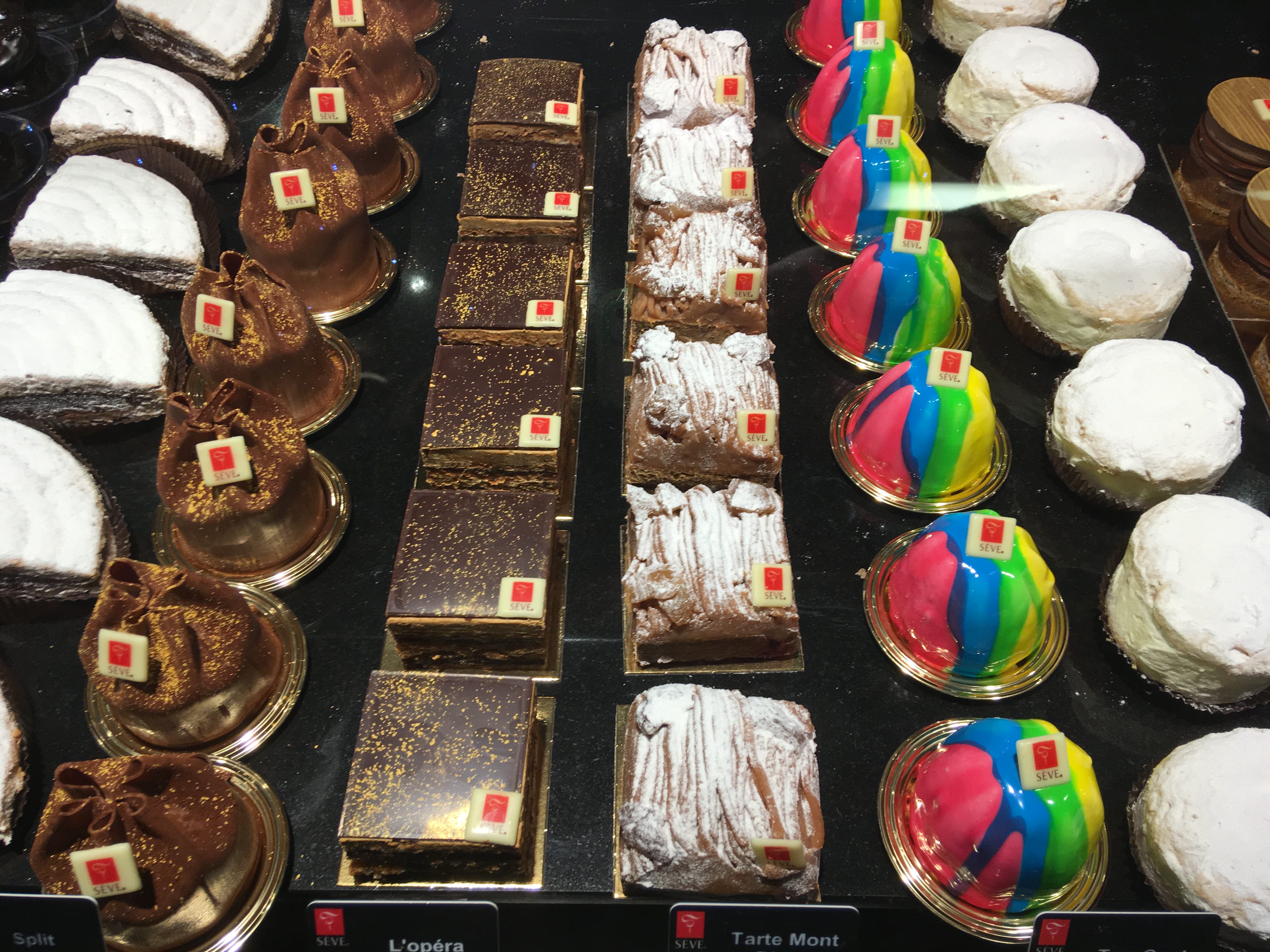 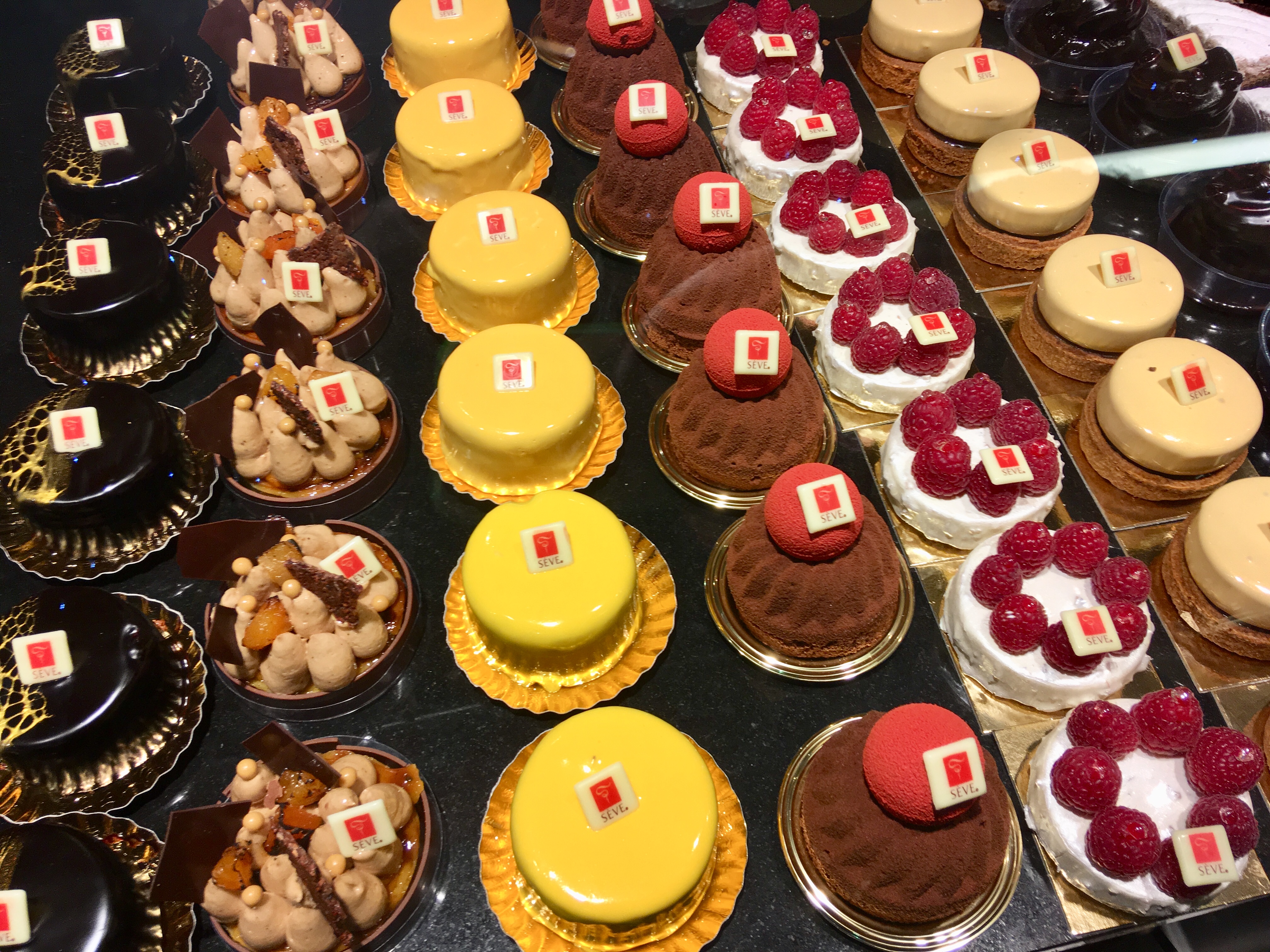 And so the sun began to slide away, heralding the start of the darkness that was for the next four days to be punctuated by over 50 light installations or projections. My excitement was growing and my energy levels were starting to rocket from the mountain of sugary puds I was being tempted by. I would say I’ve been a naughty boy but the thing they don’t tell you about Lyon ever. Anywhere! Is how bloody hilly the place is. It’s a double valley with two rivers, the Rhône and the Saône and is the point at which they once met. But clever boffins from the past engineered an island between them and this became a wealthy city thanks to the hard work and huge profiteering off the back of the silk industry here. More about that in the next blog. Do you see how I’m blog baiting you just then. Read on and read more. 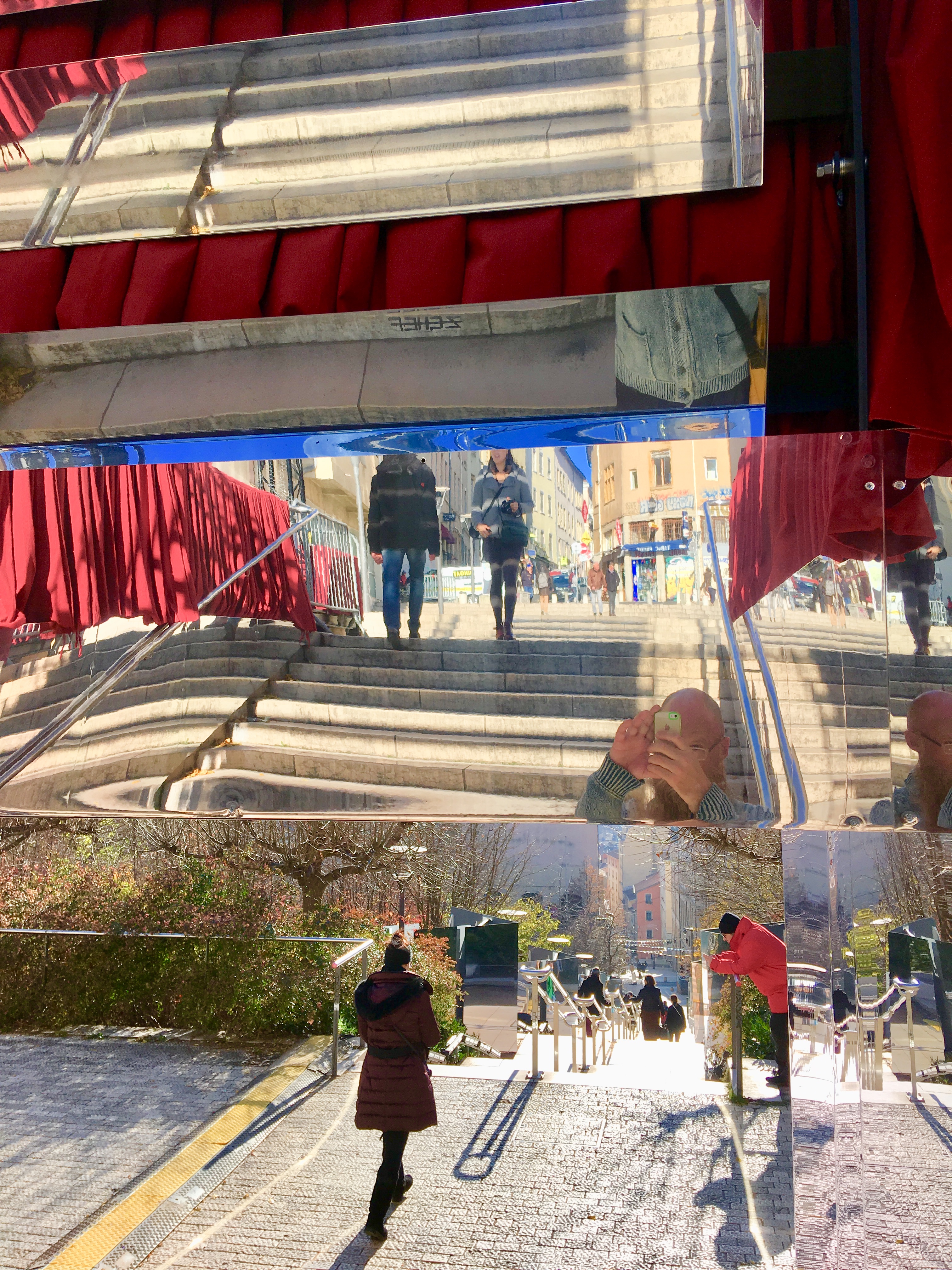 I take a short walk from my Airbnb in Croix-Rousse to Rue des Pierres Plantées. This slope leads to Montée de la Grande-Côte, the oldest steepest thoroughfare from the hill down to the old city. It was so steep centuries ago that to stop horse and carts from attempting to go down it, large rocks or stones were planted all across the top and sides to stop any foolhardiness. So Peter the Rocks or Pierres Plantees. Oh how I love these little tales of town names. 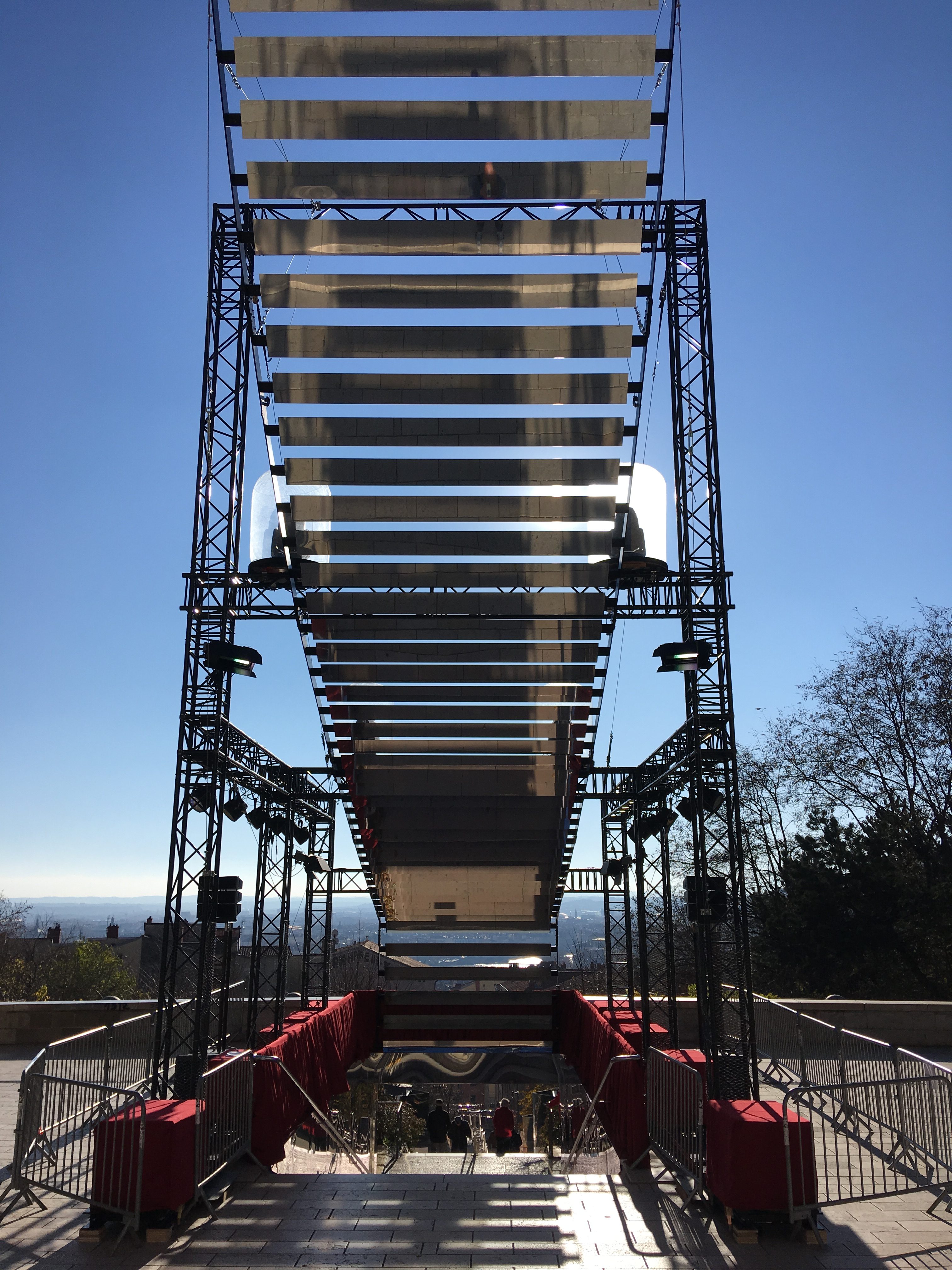 Genius Scala – Ilex begins at the city viewpoint. at the start of the steps there is a grand sweeping curved arc of mirrors and red cinema style curtaining. All the way down the steps there are sheets of shiny metal bright as mirrors and cornered in four sections creating the illusion of spaces full of the city panorama and steps that don’t actually exist. The garden is bathed in pinkish light close in hue to ultra violet. 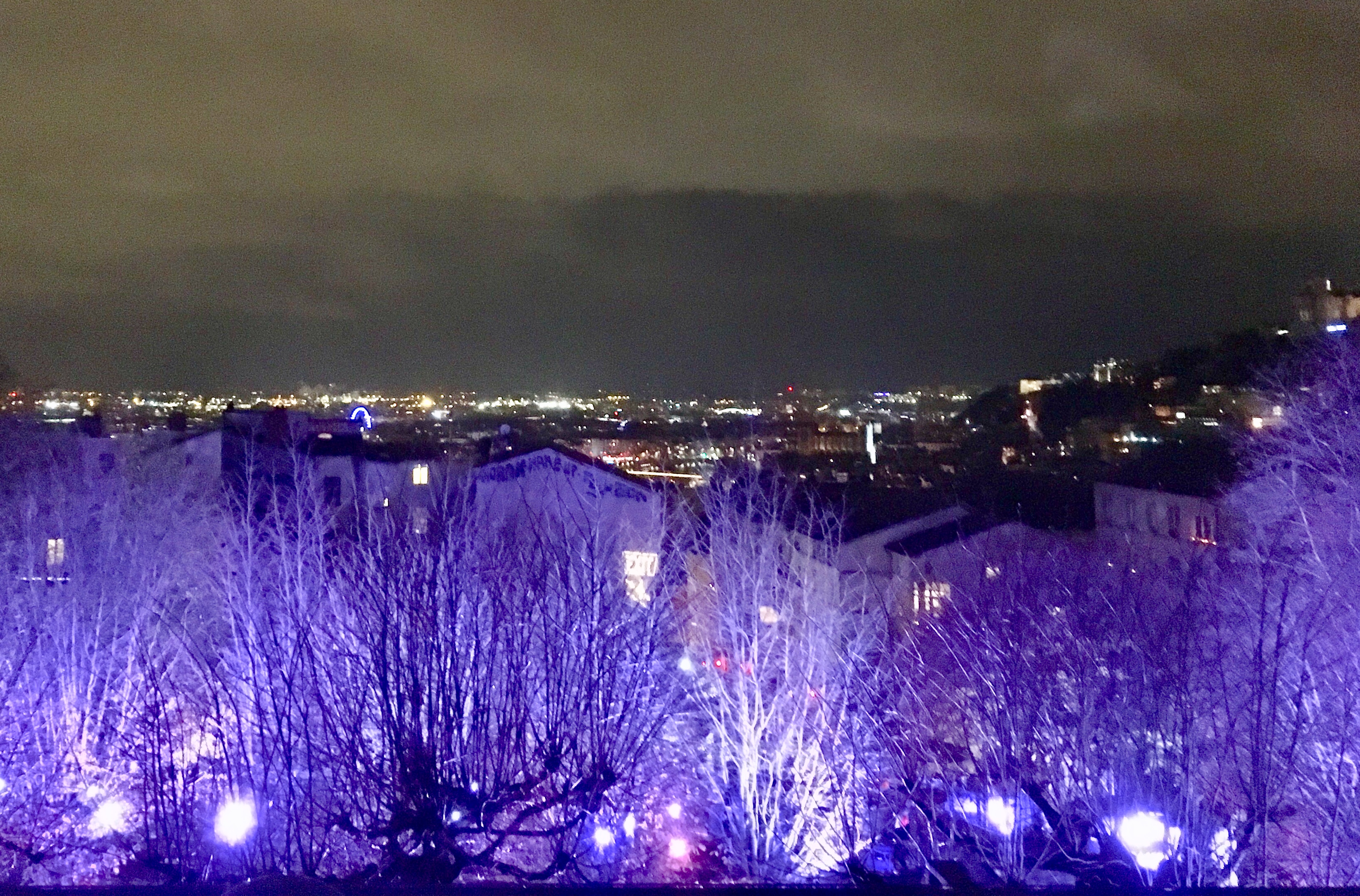 Film and TV music blares out of the bank of speakers and sharp white beams cut high into the night sky. Jurassic Park morphs into the theme from Rocky which immediately has the queues of visitors, waiting to descend, jogging from one foot to the next and shadow boxing with large grins. This fun is then oddly swallowed up entirely by a moment of extreme darkness. Folk grab handrails and the descent slows to a halt as people fear tripping over and tumbling down the vast stone staircase. All this fear as rather bizarrely, Yackety Sax, from the Benny Hill show begins to play. Unlike the previous tunes, this is extremely quiet and rather apologetic considering it’s crude cheeky use in the TV show. It was however a cover version and  covers and copies are all the rage here. One evening the radio station we were listening to played about 20 versions, one after another of the classic standard “Cry Me a River”. Went on a bit long but we knew all the words by the end. And became extremely judgemental about the performances. 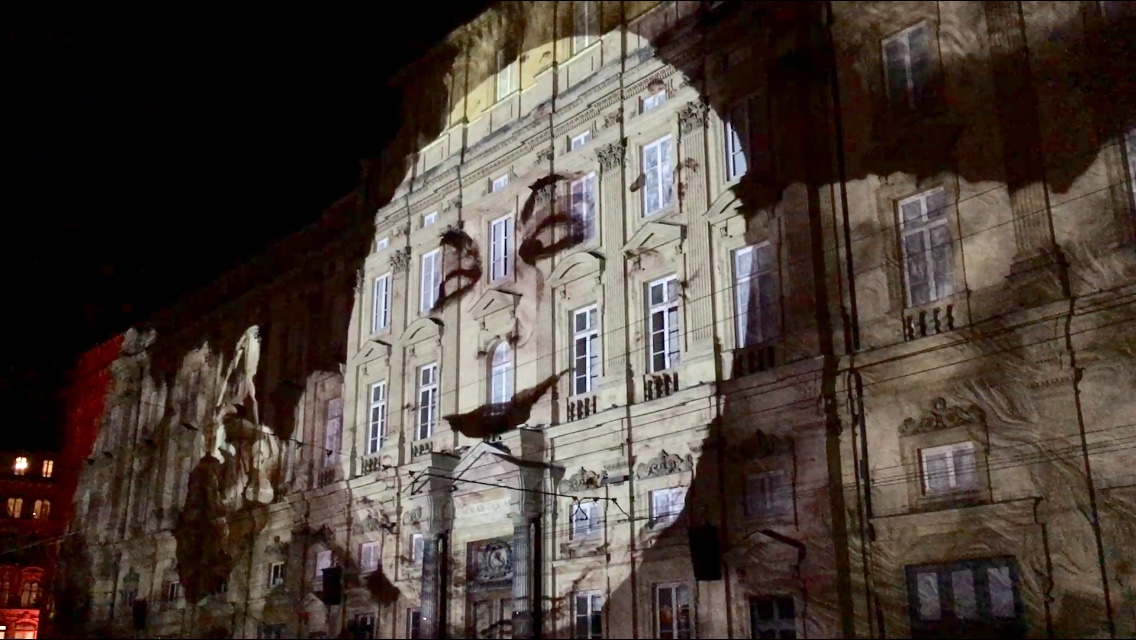 In the main square, Place des Terreaux, the events kick off properly with the town’s carillonneur playing film them tunes on his bells. I have to say that they were rather quiet and many of the townsfolk talked over the performance sadly. They, were waiting for the main event, an animation across the the Hôtel de Ville and the Musée des Beaux-Arts, with big loud body shaking woofer speakers. It involved a girl, Enoha and her cat and their intrusion into several famous film scenes. This short film projected the museum building back onto itself in a variety of rotating, crashing, twisting bricks and parts of the facade. 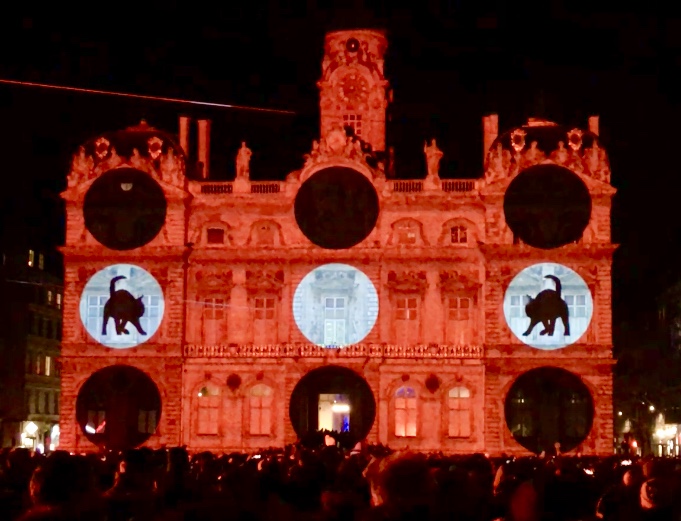 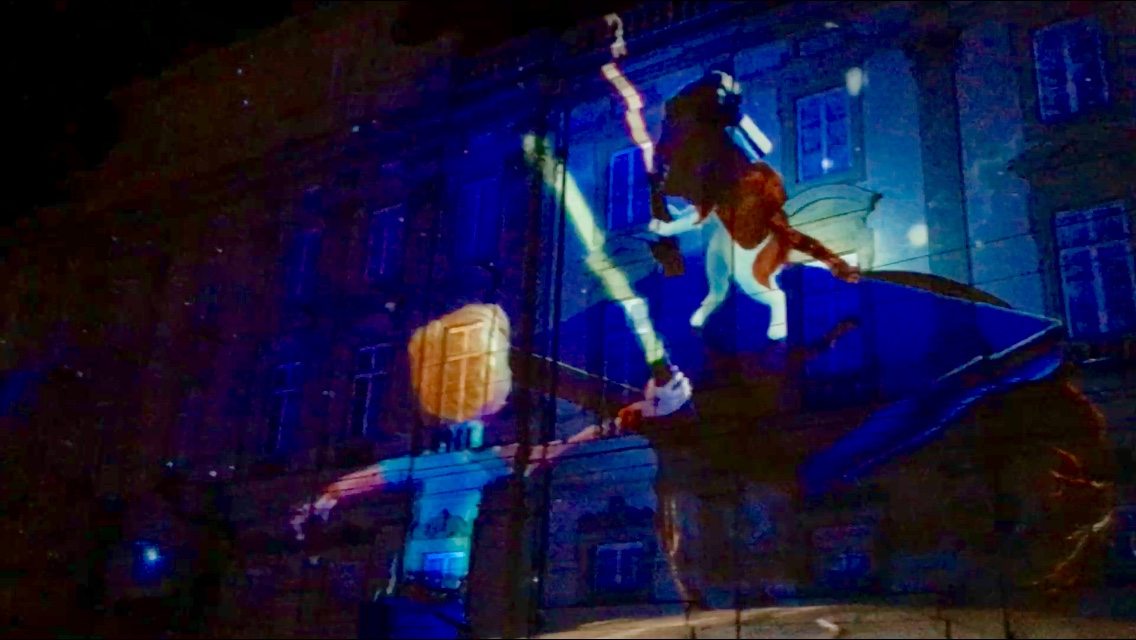 This climaxed with Star Wars and cat Darth Vader in a light sabre fight to the theme tune from 2001 – Richard Strauss’ ‘Also Sprach Zarathustra’. Then the thousands of viewers in the square were directed to leave to the right to head off in search of the other installations as a new group of thousands were let in to Place des Terreaux to watch the animation we just enjoyed. And repeat for four days. 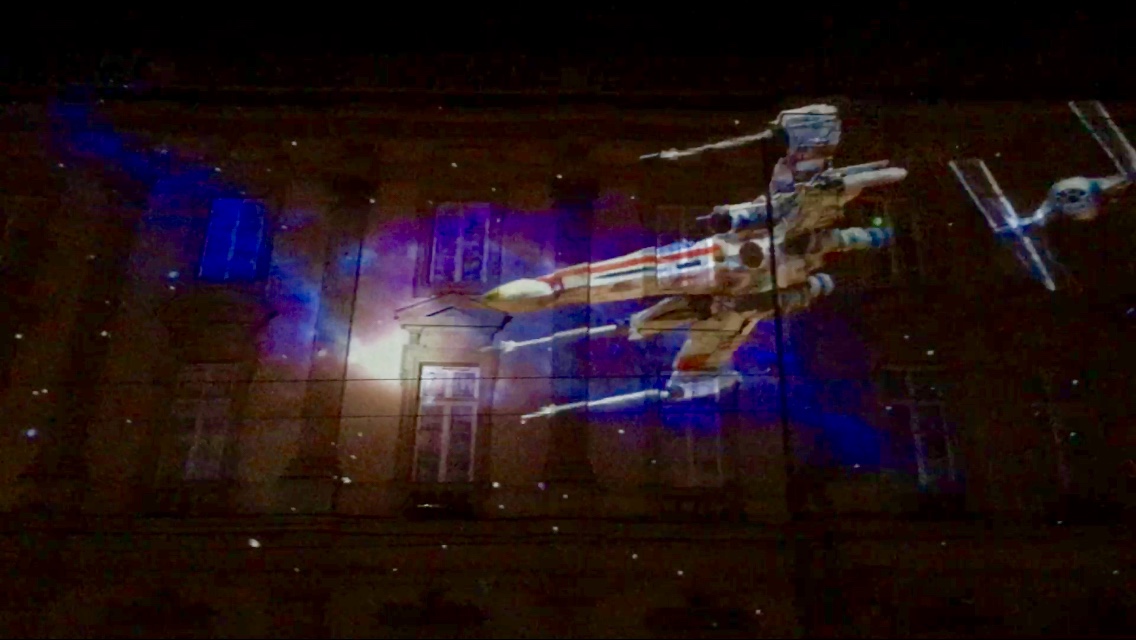 Touring the streets were the most marvellous Fête regulars “Lucinoctes”. These inflatable moving acid coloured oddballs were accompanied by strange childlike nursery music with the puppeteers singing live into headsets. This was charming and fun like a parade from some childhood nightmare. Totally adorable. 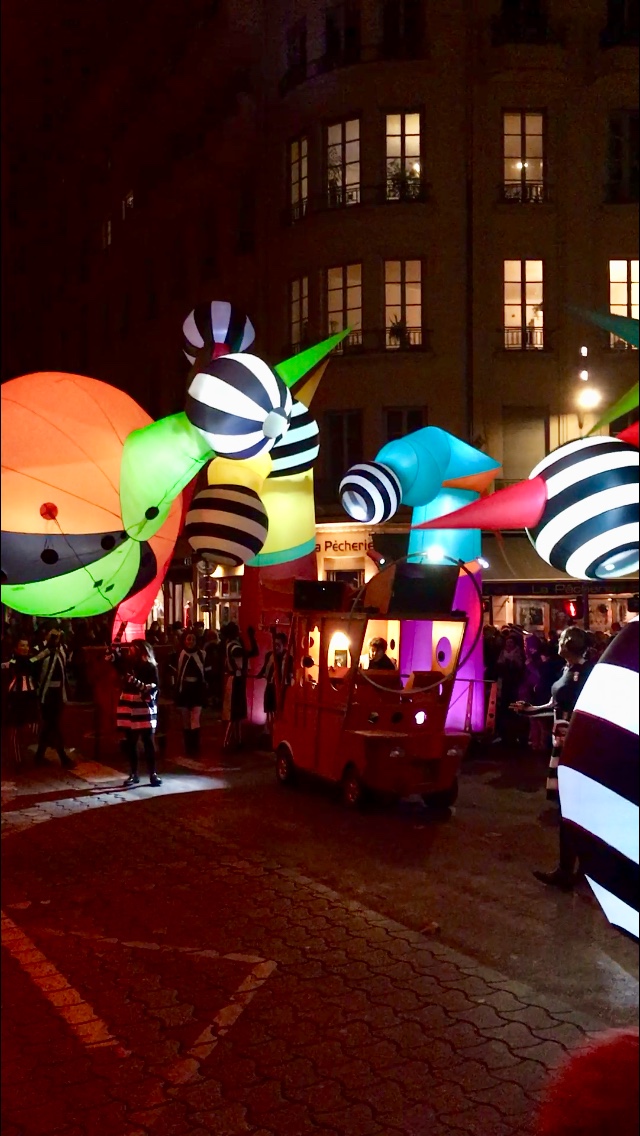 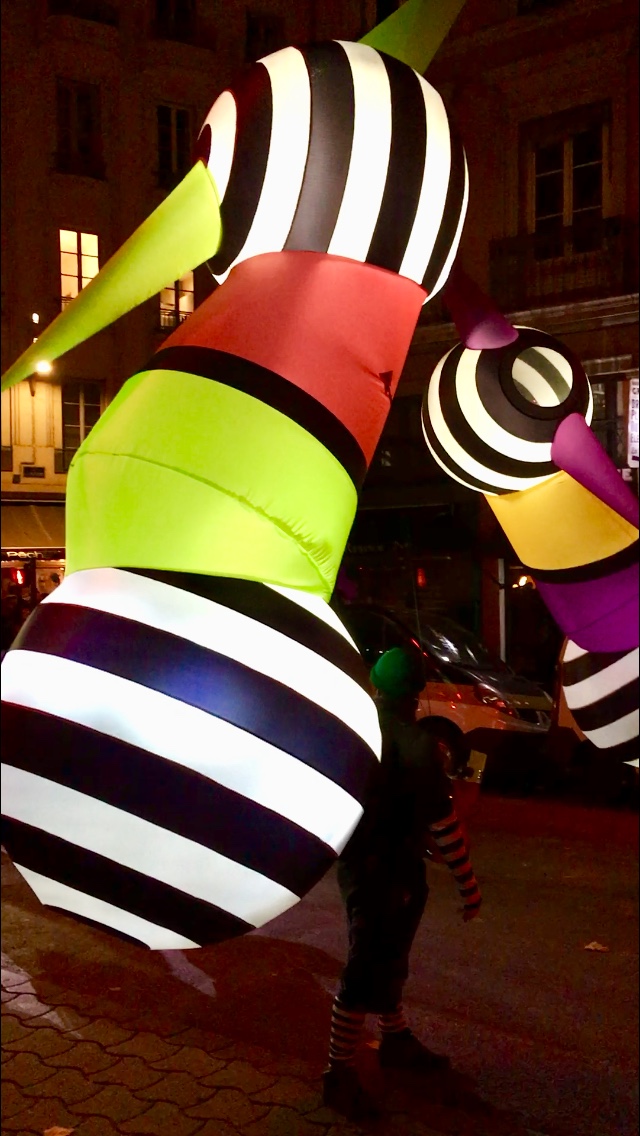 Across the river Saône there was an alternative route that included the projection Odysseus – Flashka Design on the Gâre Saint-Paul. This had funky music and black holes where the windows were. On other buildings the windows were painted white to allow projections over them. 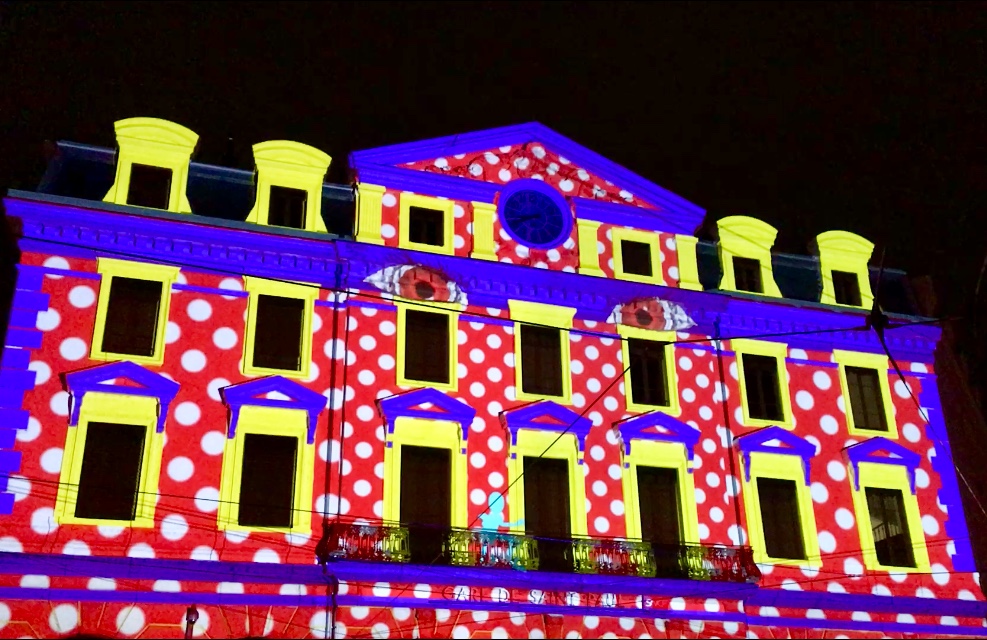 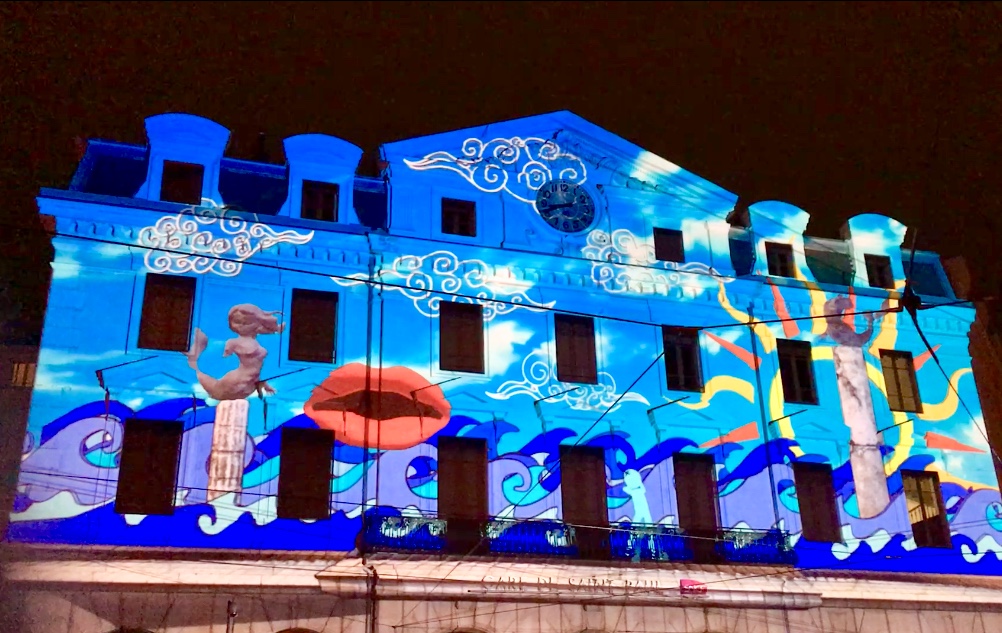 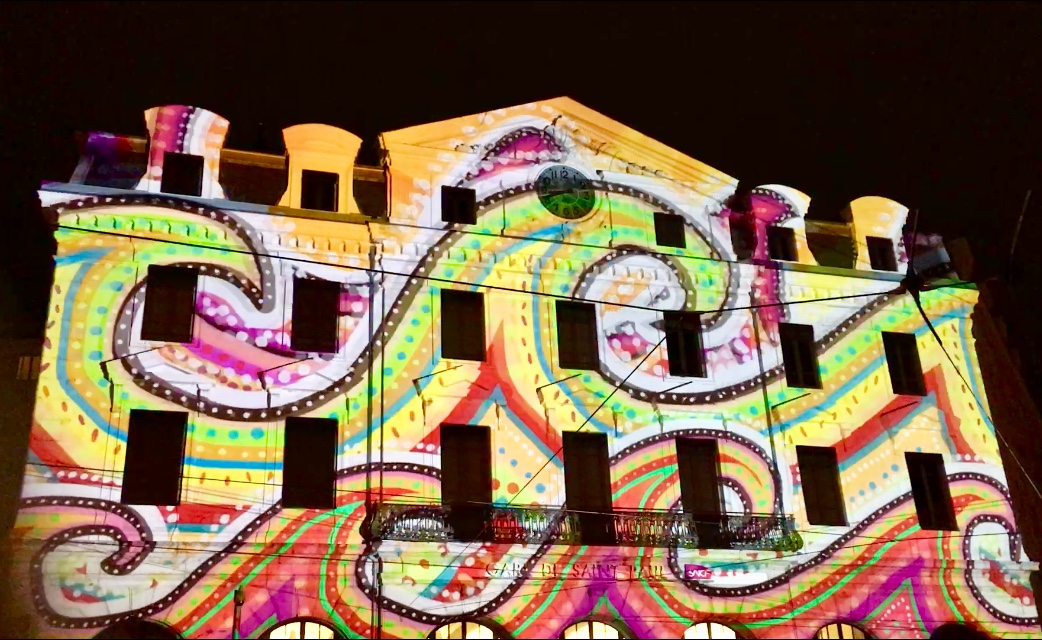 Unison – Helen Eastwood et Laurent Brun was a much loved projection on the Cathédrale Saint-Jean and was one of the few that received a huge cheer from the crowd. I was blown away by all the art but I guess the locals are less impressed. 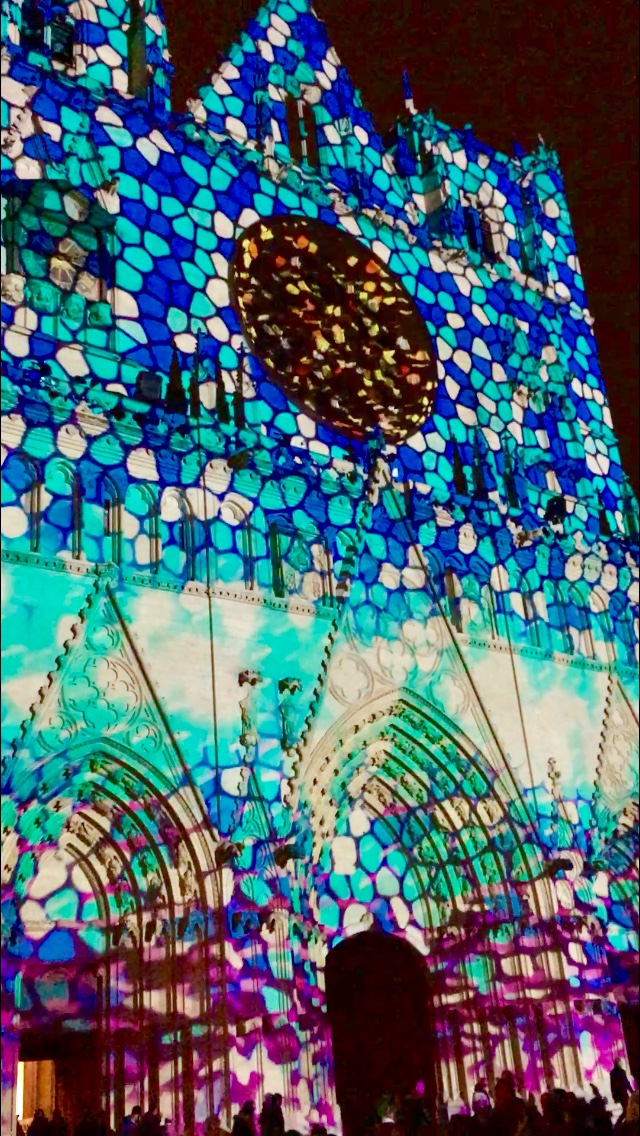 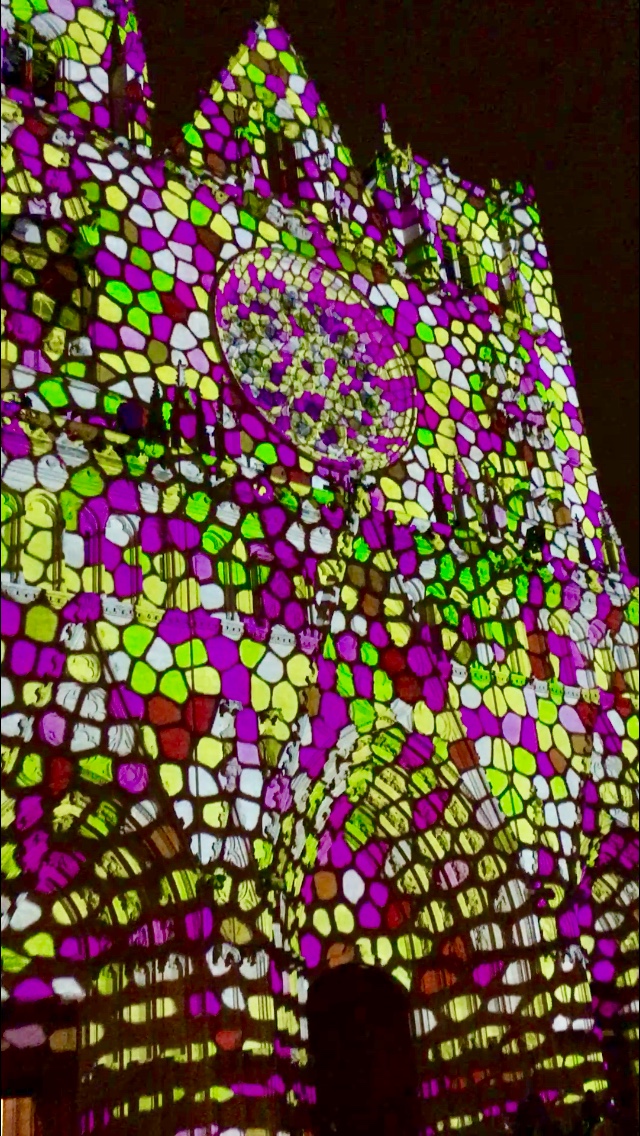 Strolling back along to the centre of town with the surge of the crowd I was swept into Place Bellecour. The largest pedestrian square in Europe which contains no greenery or trees until the Fête and the beautiful illuminated plants they pack into the square. 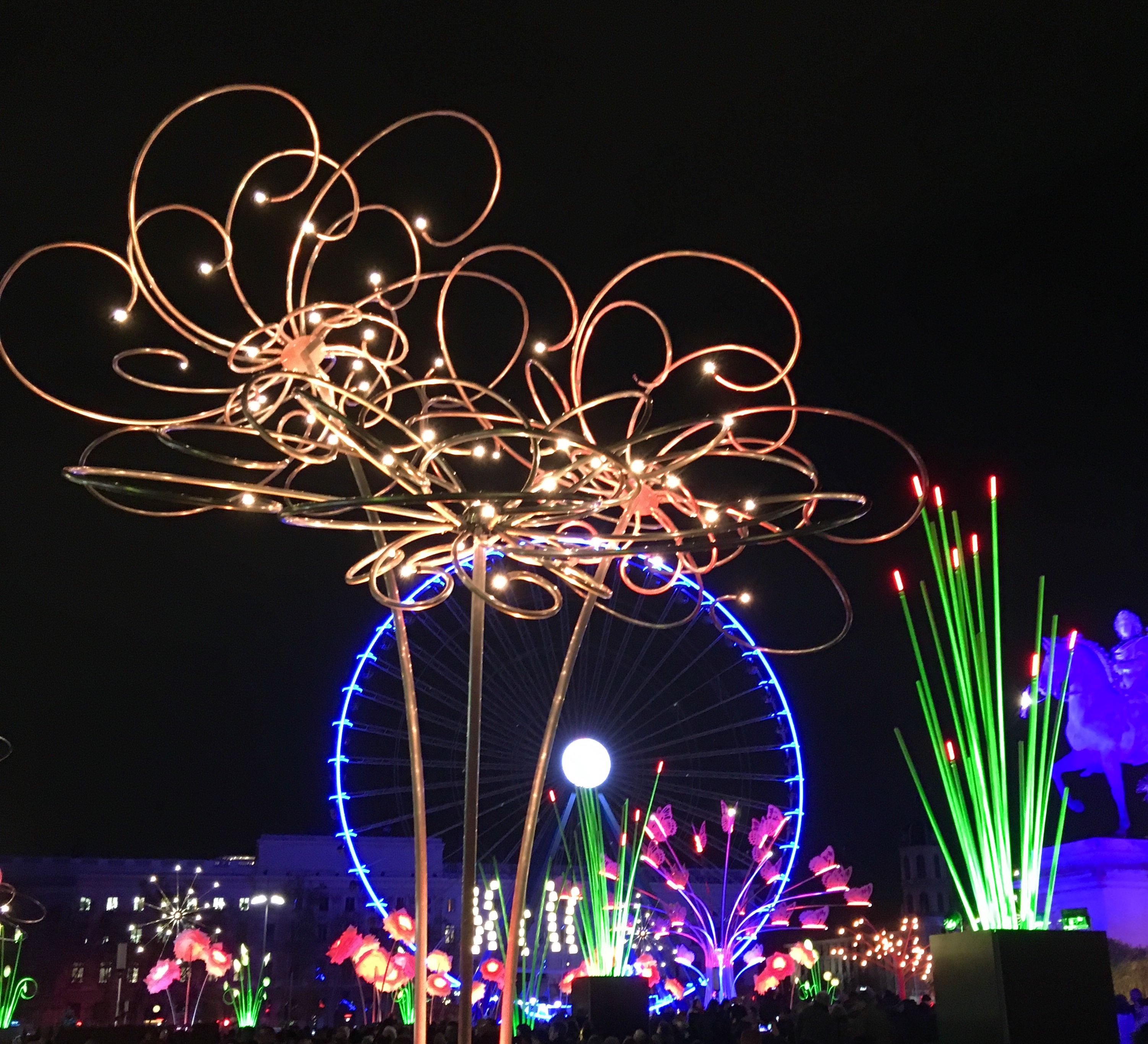 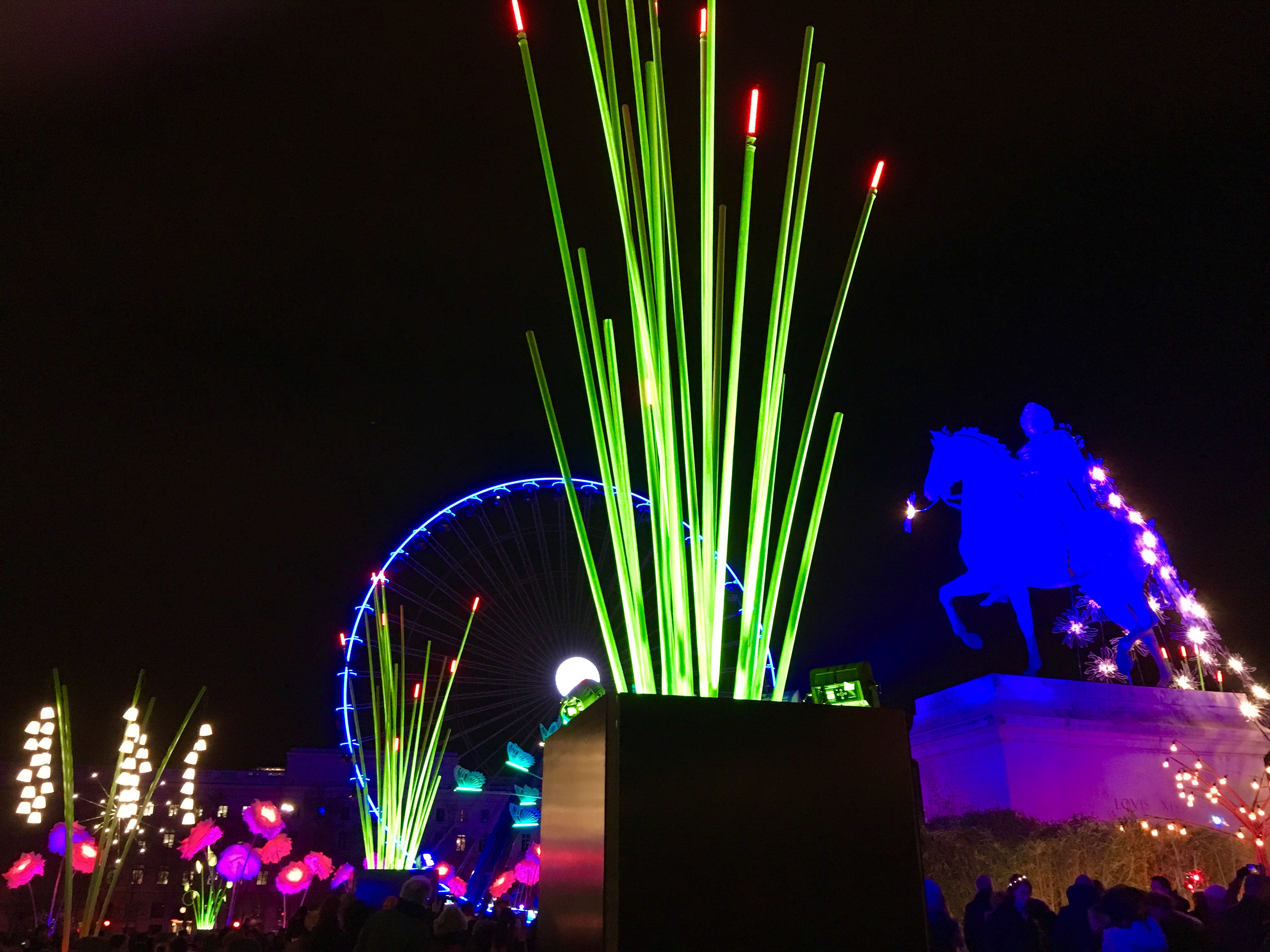 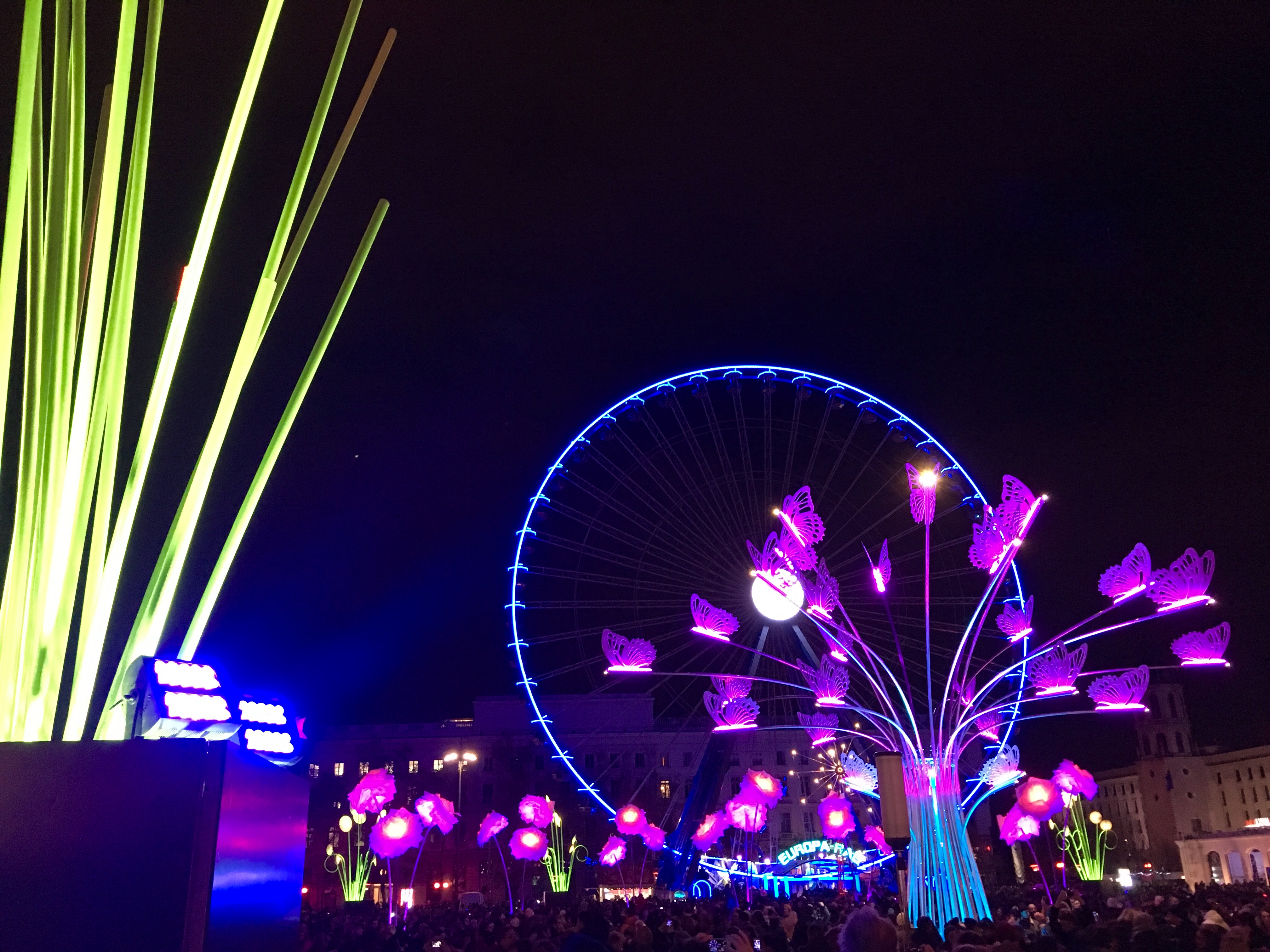 The square also includes the 60m ferris wheel during December and this is illuminated in blue bulbs all around its vast circumference. Jumping ahead three days while Adrian was with me we thought it would be a grand idea to take a ride high into the air. As soon as we had paid our cash and joined the queue inside we immediately knew it was a bad idea. The tiny carriages were open! Yes open! Worse still the guys who operate the ride spin the seats as they reach the bottom! I thought what a great way to get over my fear of heights. How wrong I was. As soon as we set off I wanted to get out.It was windy and freezing cold and I had no gloves. I gripped the central pole and shut my eyes so tight. I had intended to snap some photos at height but I feared dropped my camera from my stiff icy fingers. Besides which I was in total terror as we rolled round and round. It was the total nightmare of feeling gravity pulling on my body throughout that made me so petrified. Never again. I say that but like this restaurant I can be a bit of a fat head. I do always want to show off to myself and others and prove I can do the impossible. 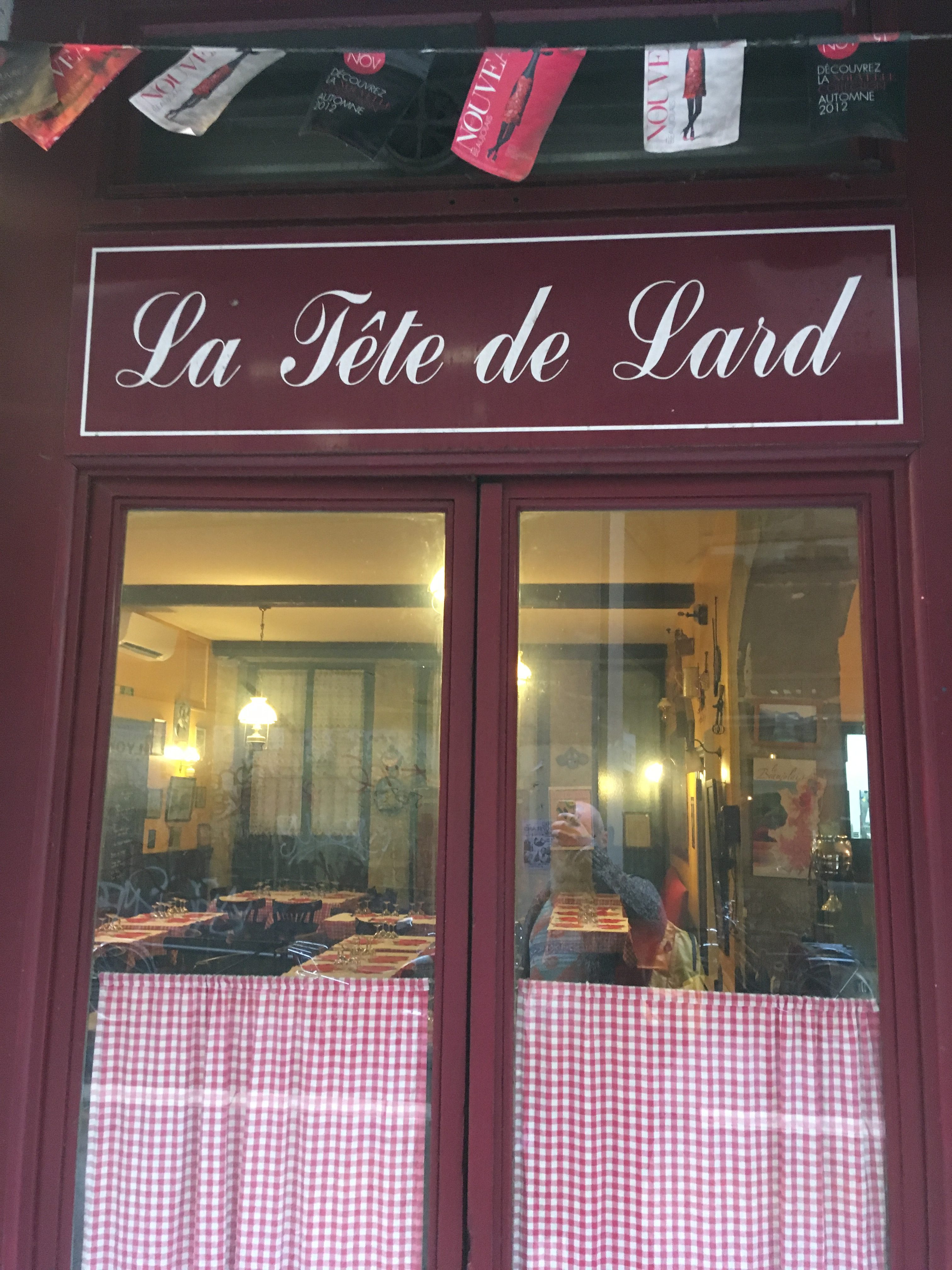 Check out the Guardian review and feel pleased that you got to see my photos first. They’re much better than these and I’ve more to come in my next blog. Yeah I’m getting cocky but I’m growing in confidence as I write ever more on here.