It was time to plan my magical dream trip to Machu Picchu. With my wonderful friend Arturo we went to the Peru Rail offices to look at the options. I’d already done a little research on The Man in Seat 61 website, the go-to person for all rail journeys. We weighed up all the options and decided that the fabulous Hiram Bingham service was the one for us. 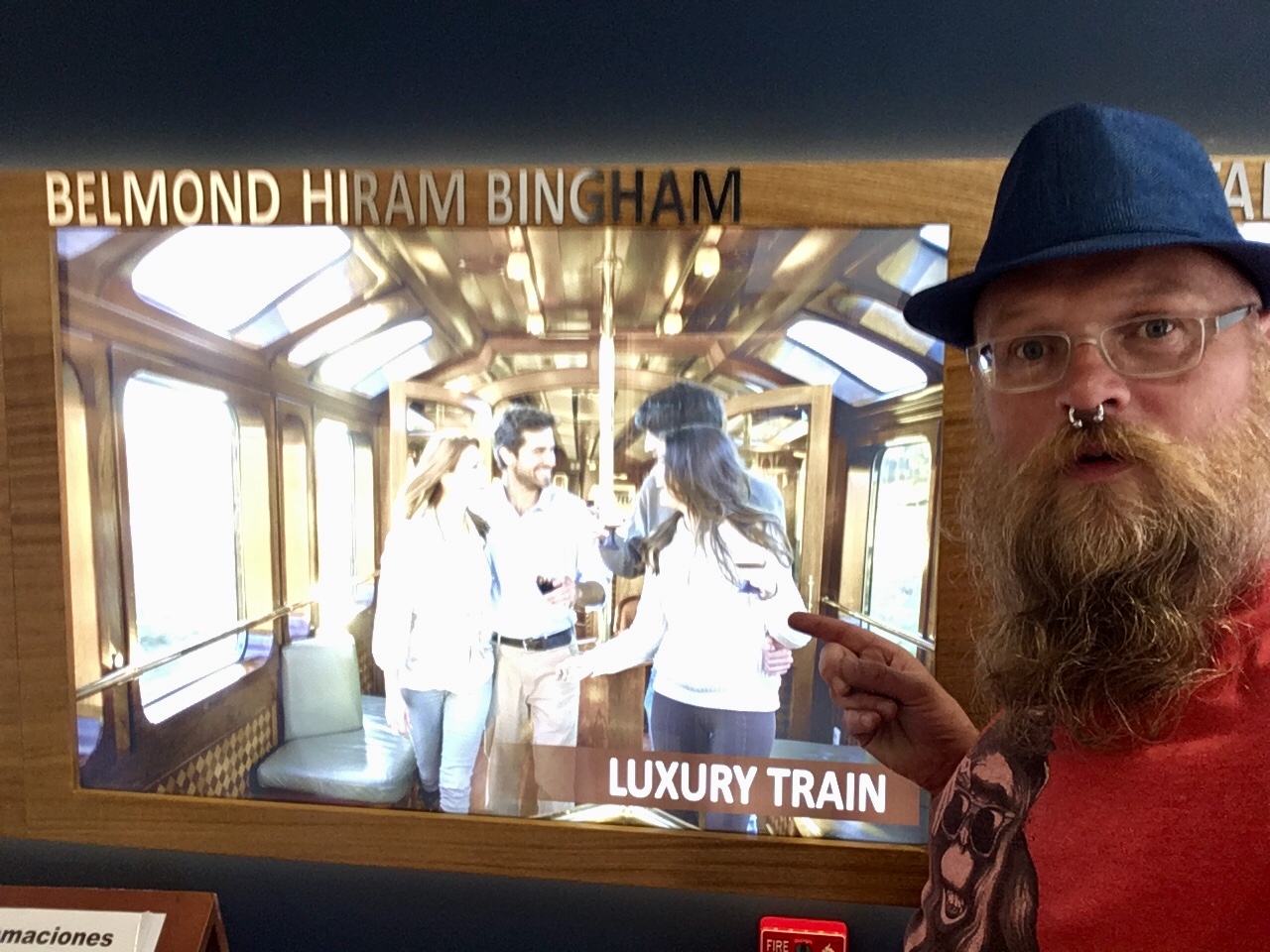 OK it’s the most expensive but this was a trip of a lifetime for me so I wanted everything to be special from the start to the finish. It promised to be like a Merchant Ivory period film complete with high tea or an Agatha Christie novel, hopefully without the snow storm and murder. 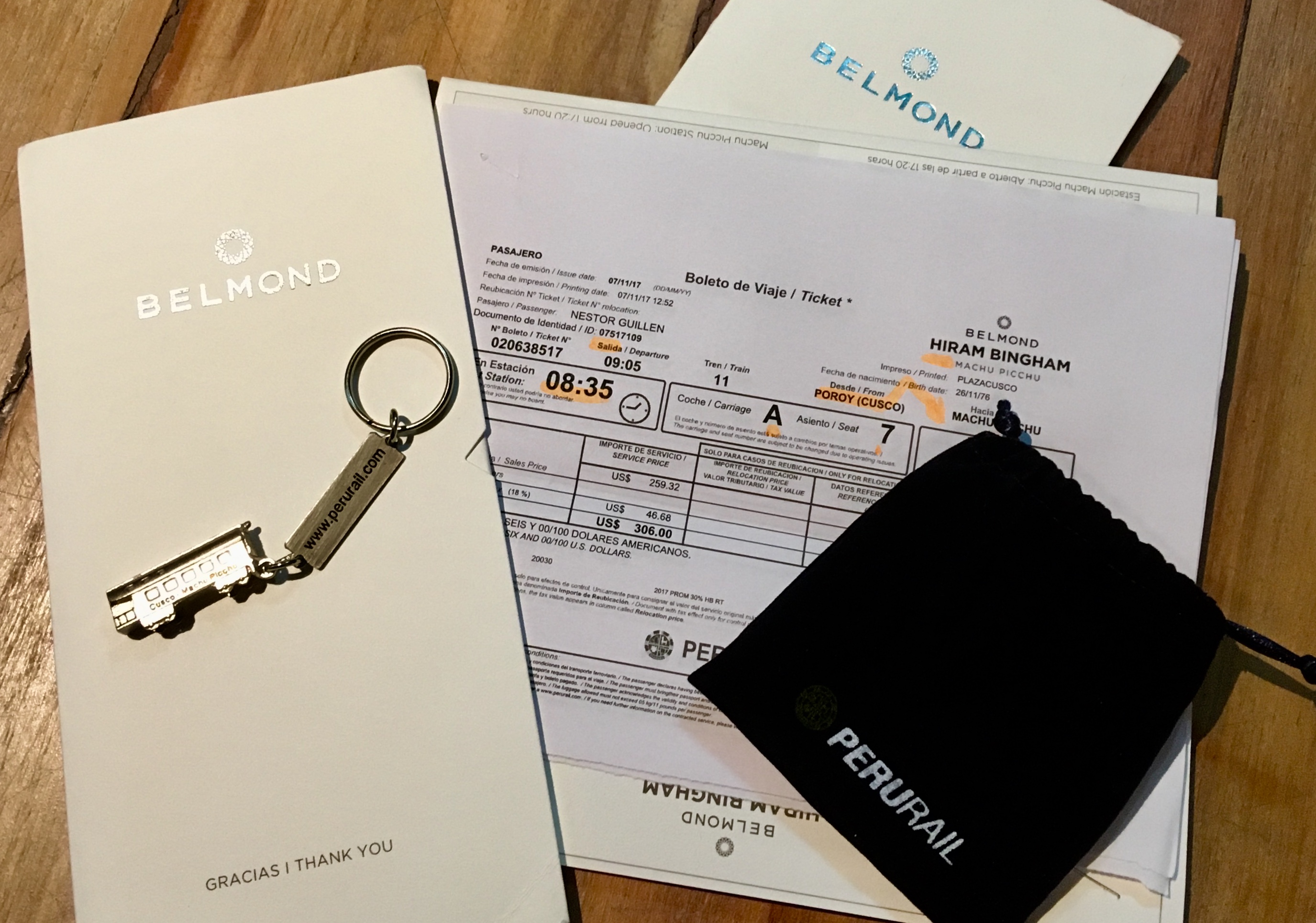 Our taxi took us to Poroy train station about 40 minutes over a high mountain and down the other side to a world outside Cusco that remains hidden from view within the city. The station was beautiful and full of comforts as we waited for the resplendent train to pull in. 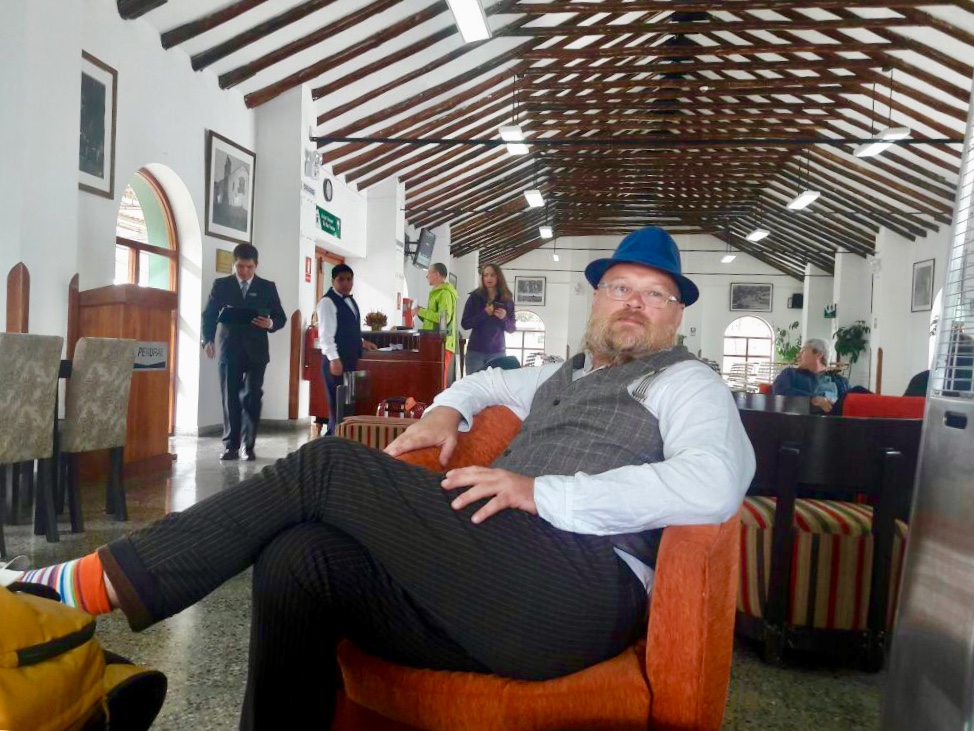 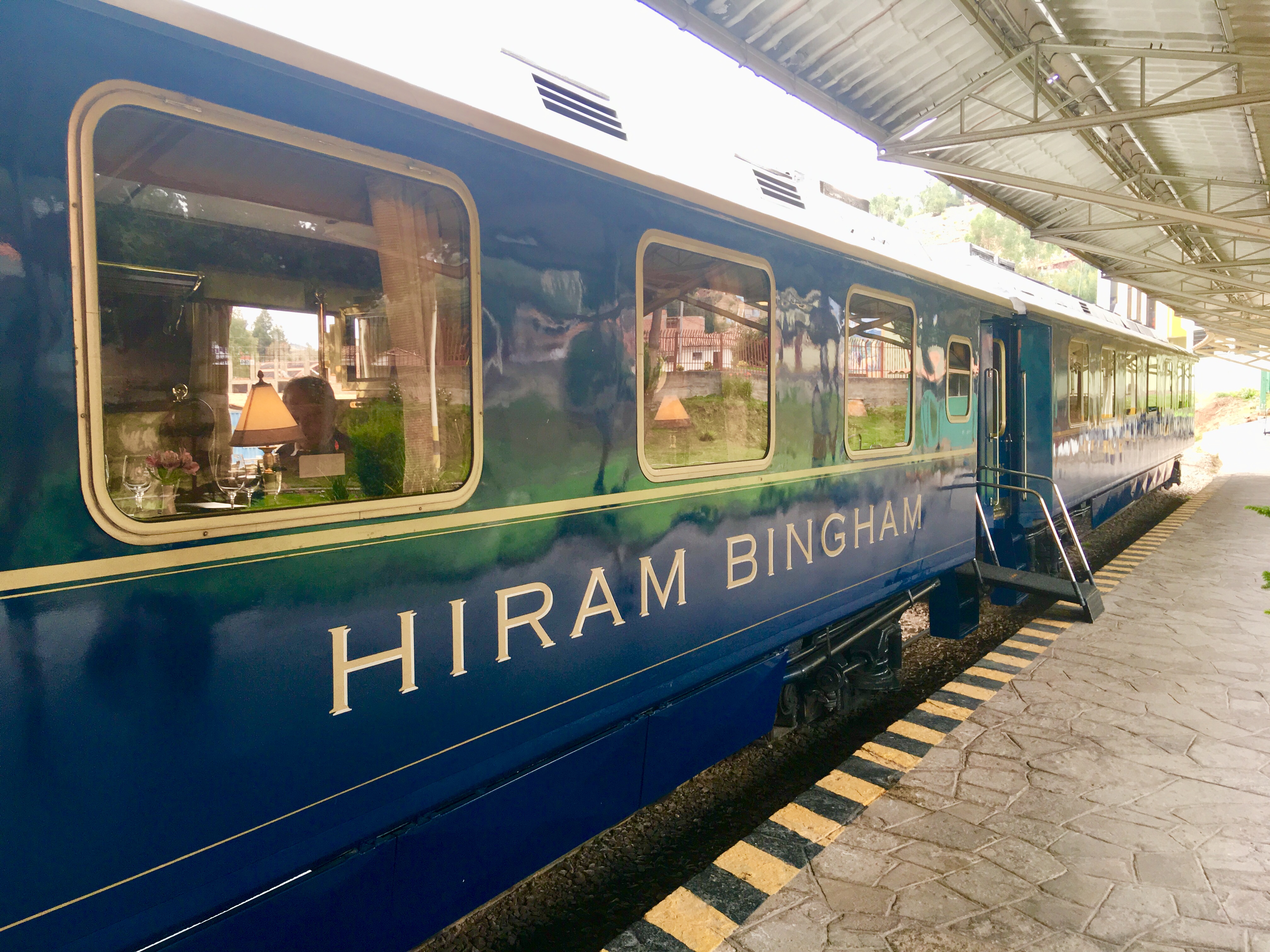 When it arrived I was like a child on Christmas morning. We were taken to our seats to drop off our bags, all of which are dining cars in glorious Art Deco splendour. 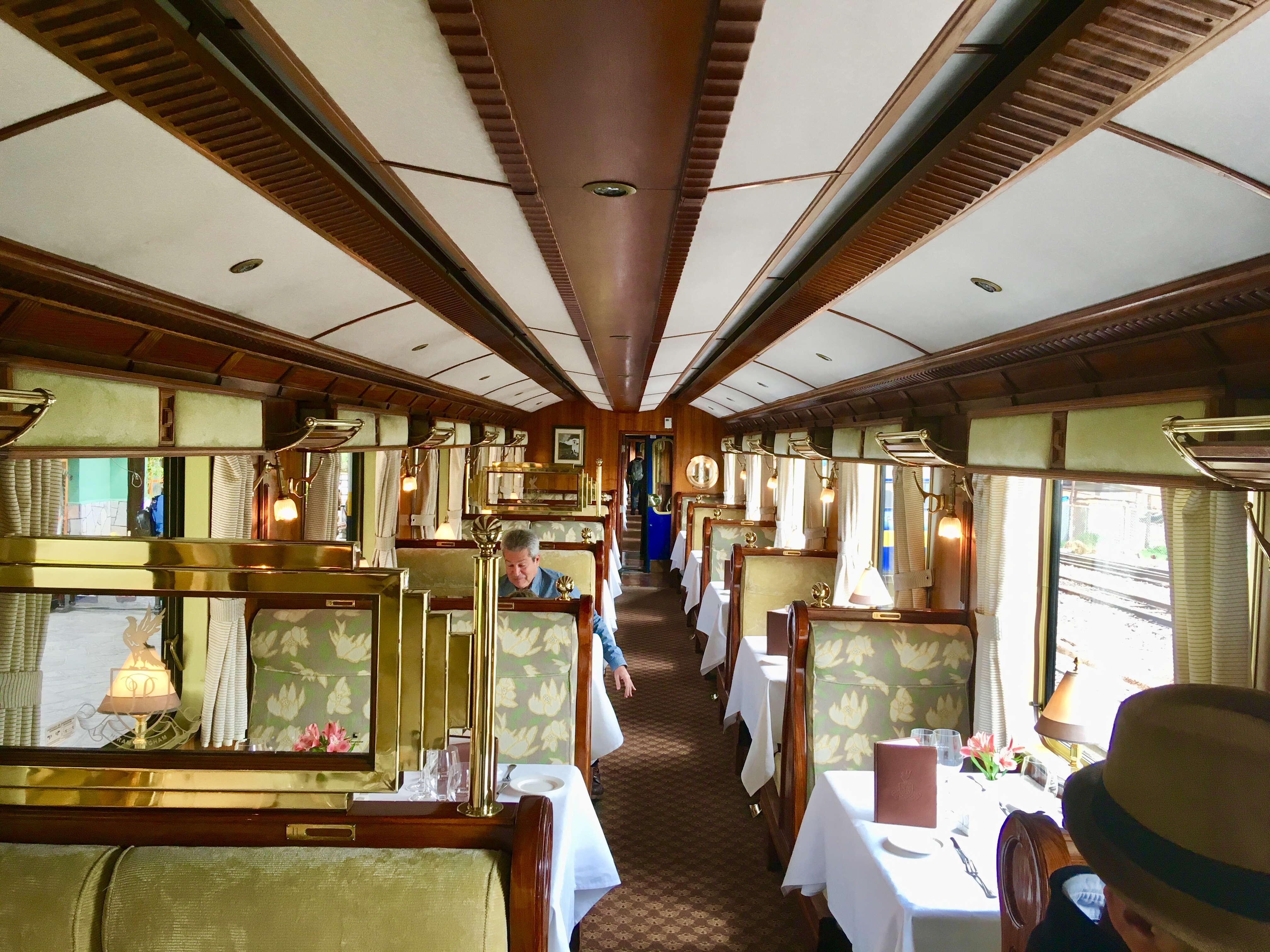 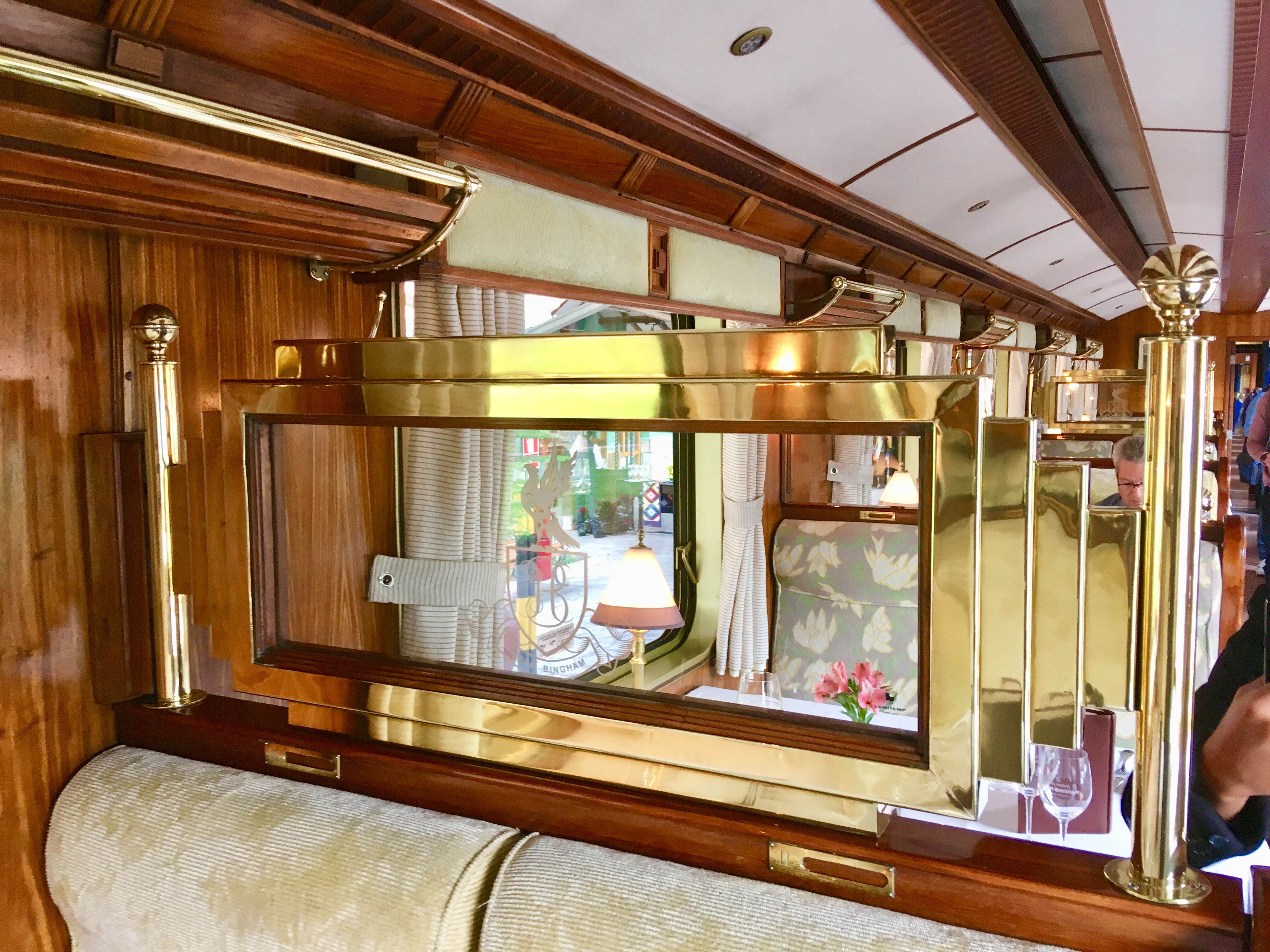 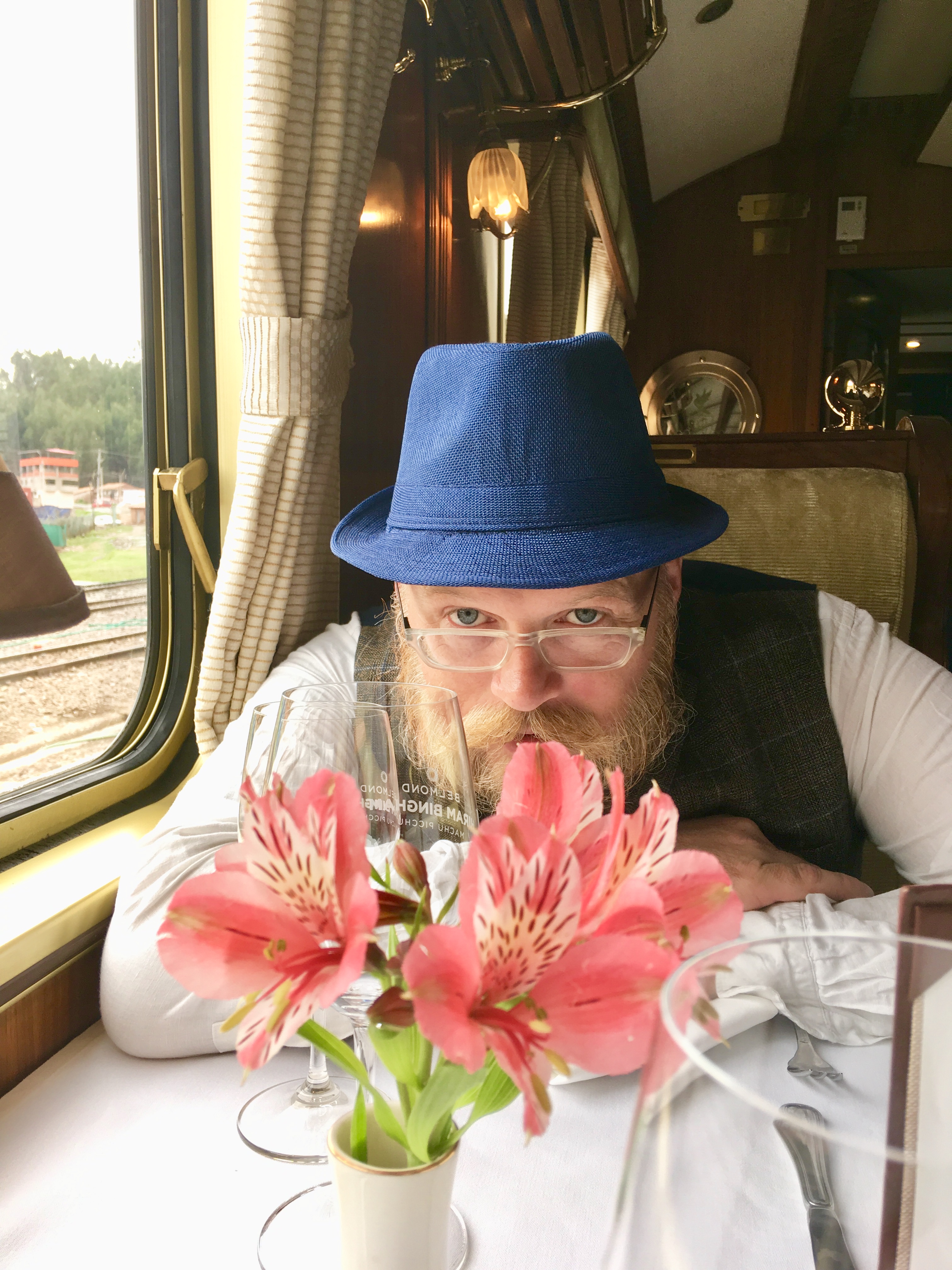 Then after exploring the train we returned to the platform where we were given a champagne reception and a fantastic performance of traditional dances and music from various regions. Check out my Instagram account to see and hear them properly. 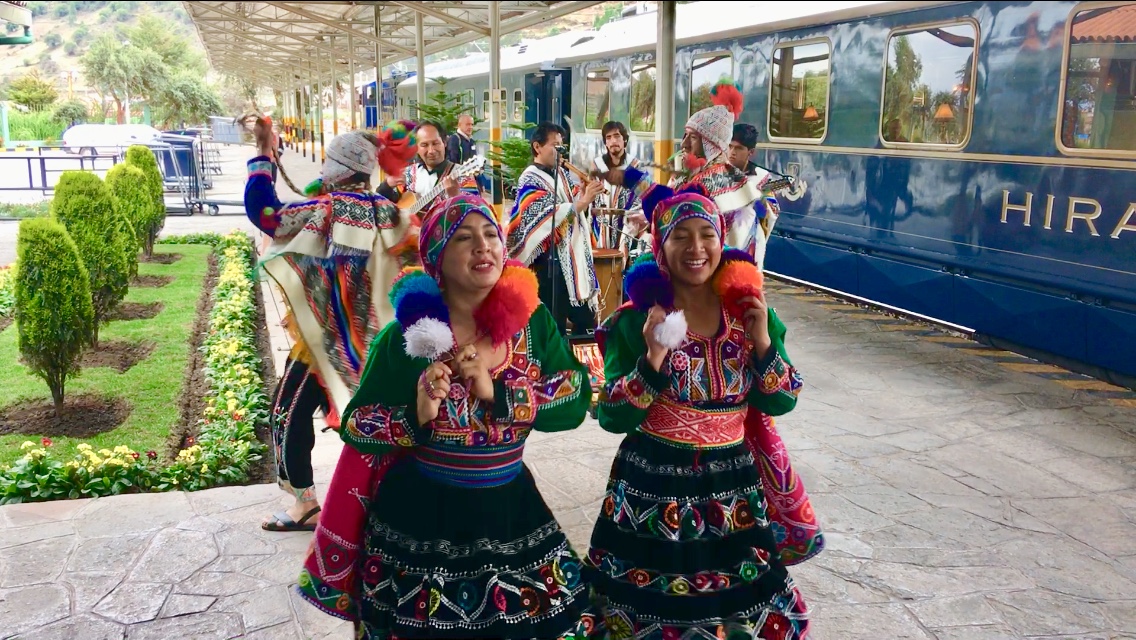 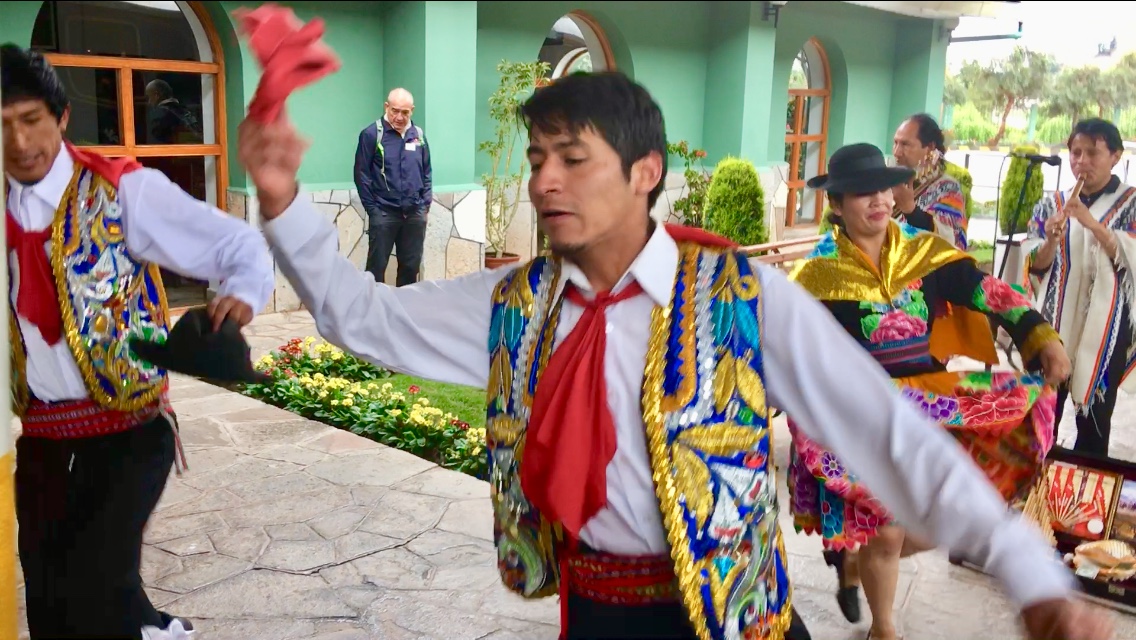 Most amazing was the lounge bar carriage at the end of the train with an open deck at the very rear. The kind of carriage you see in old western films and with the most beautiful views of mountains shrouded in mist, gushing white rapids and tiny farmsteads all the way. 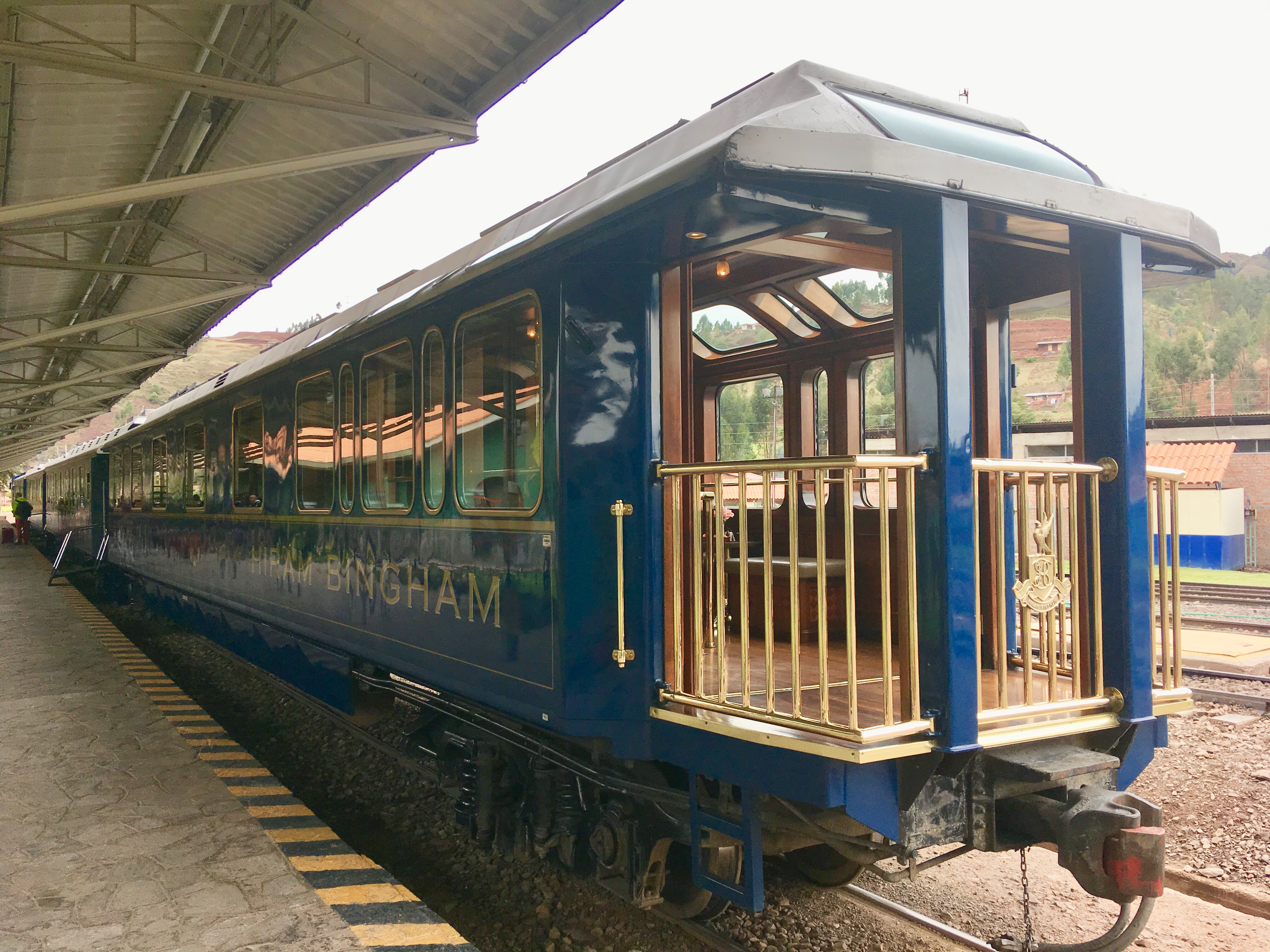 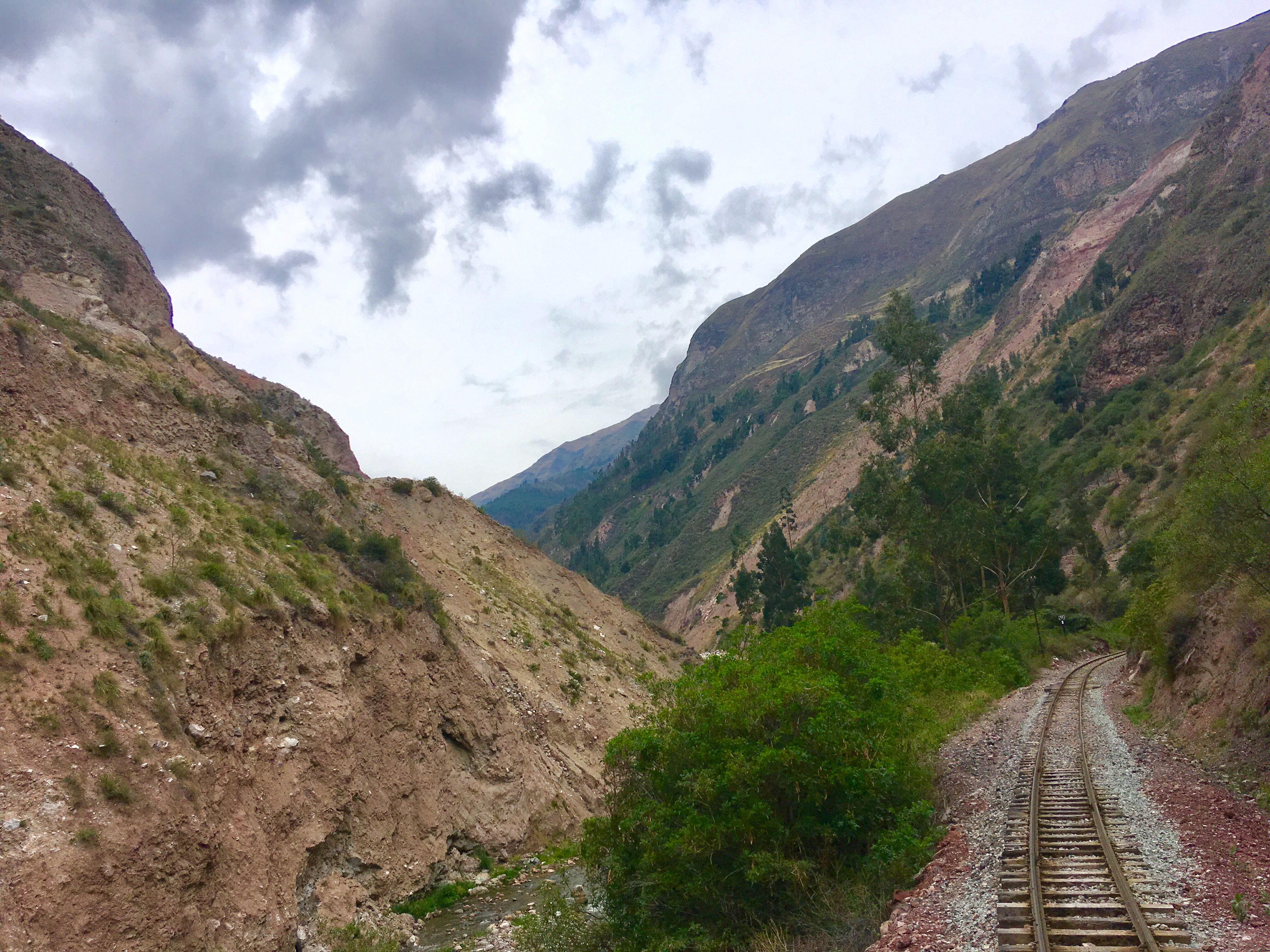 The train rocked and jiggled and clattered along the tiny gauge line adding to the feel of bygone times. The rail also has a couple of zig zags that it has to reverse down and switch to the next line to continue the marathon journey. 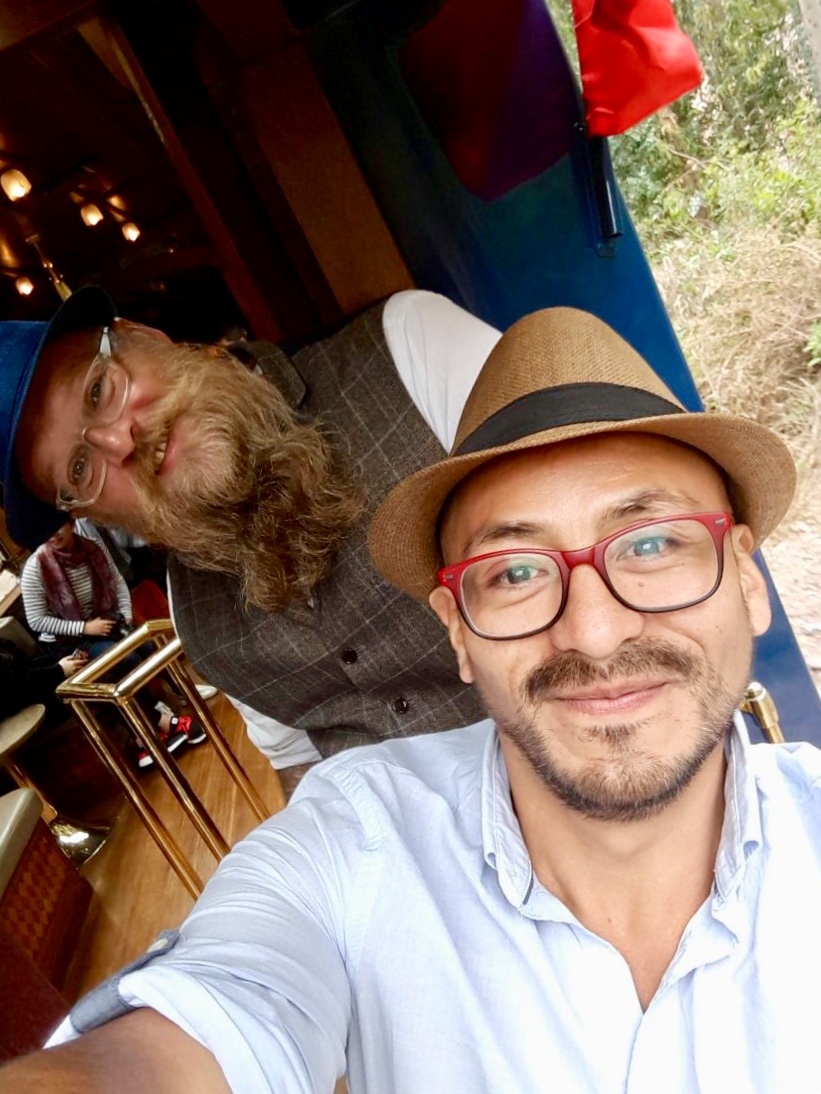 It takes three and a half hours to reach the destination and we were to be entertained with music and fine dining throughout the journey along the Sacred Valley. 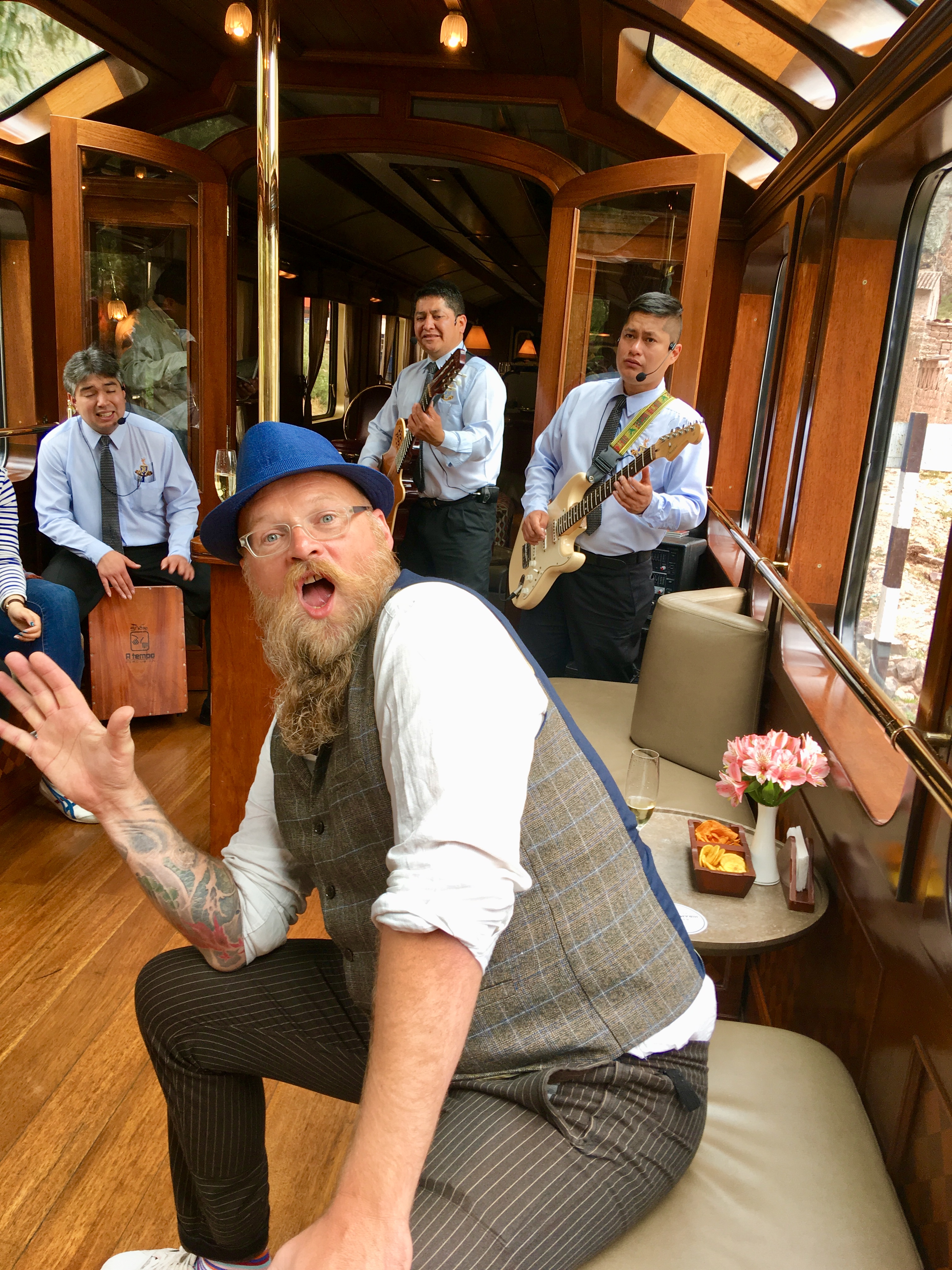 All the guests were as excited as we were by the magnificence of the train and the scenery. While we all snapped photographs from the open rear of the train a three piece band sang Latin classics and some Beatles and Rolling Stones tunes with a Peruvian twist. 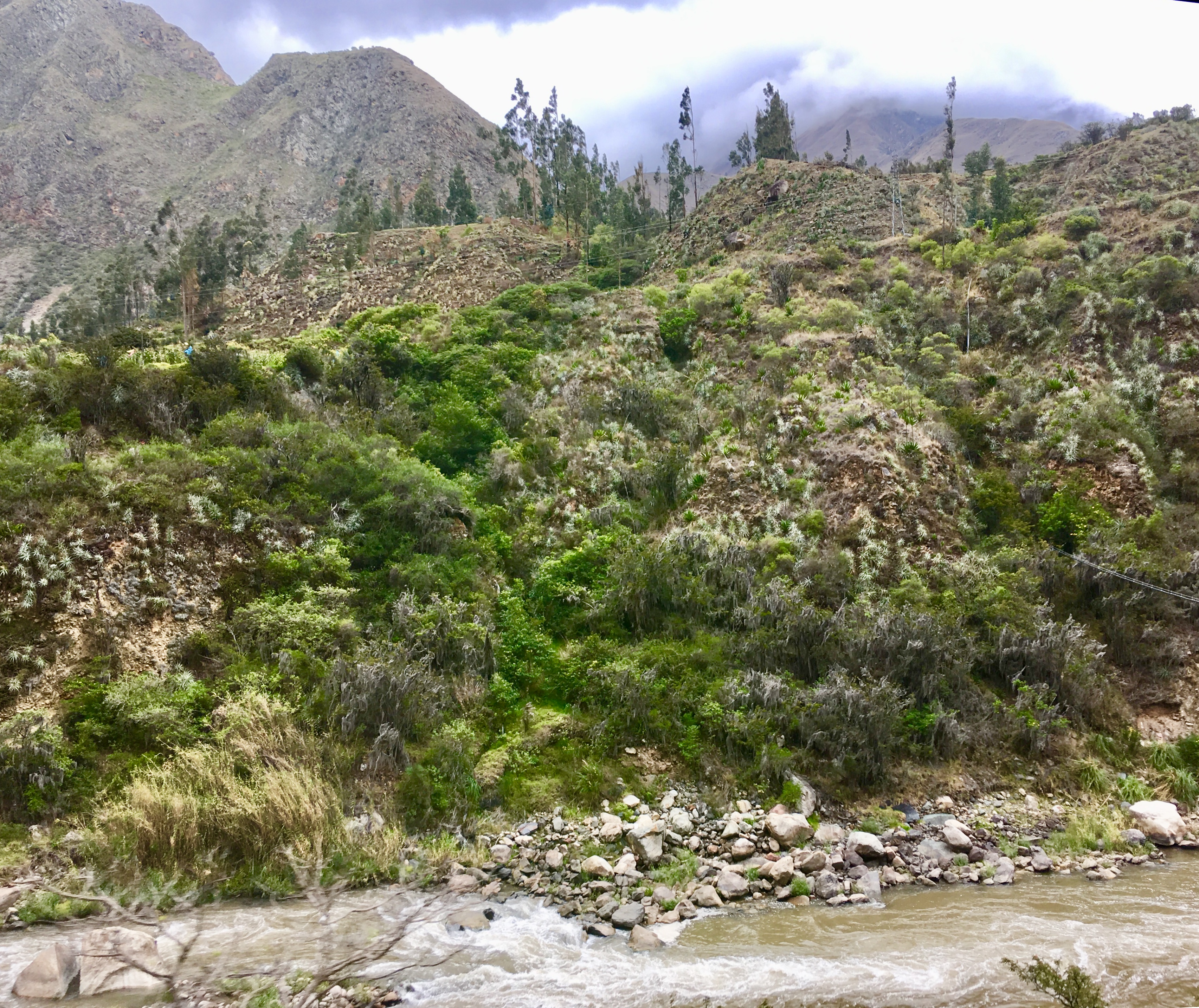 After we stopped at the station in the Sacred valley to pick up more passengers we were asked to take our seats for the gastronomic 5 course luncheon. Delicious wines flowed and we were treated to local produce served up with such beauty that we all felt very much in heaven. 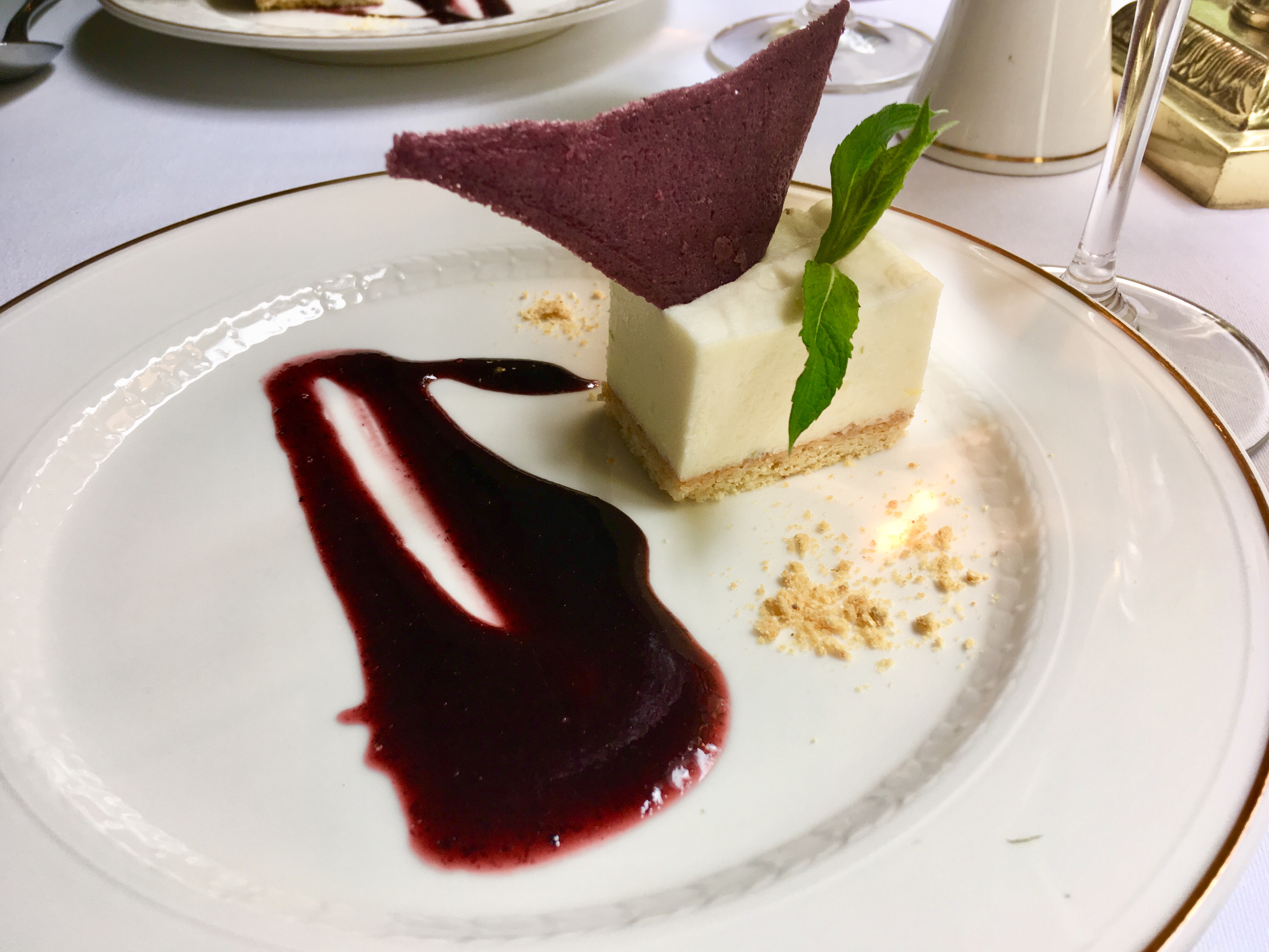 Everything was so perfectly timed that the coffee and hand crafted chocolates were consumed as we reached our destination. 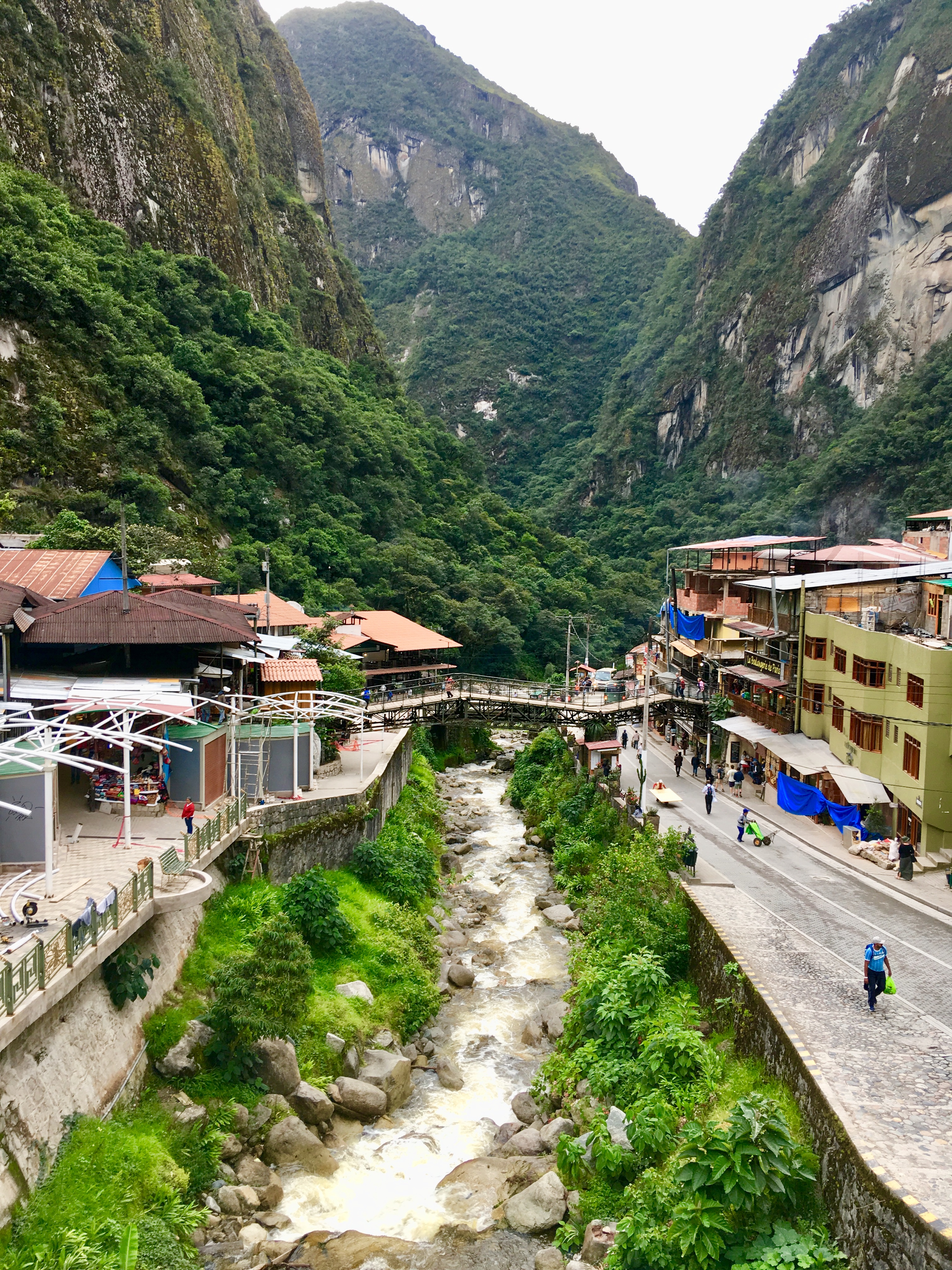 In the station I changed into shorts and my favourite but now faded Jeremy Corbyn as Christ T-Shirt by Peter Quinnell ready for the hike around the ruins of Machu Picchu when a disaster occurred. I left my blue hat on the train and that beautiful train had pulled out of the station!!! Luckily there were many stall and shops as we walked 5 minutes to the buses to drive us up the mountain and so I was able to purchase a new green hat. Much better to coordinate with the lush greens of the Inca settlement. 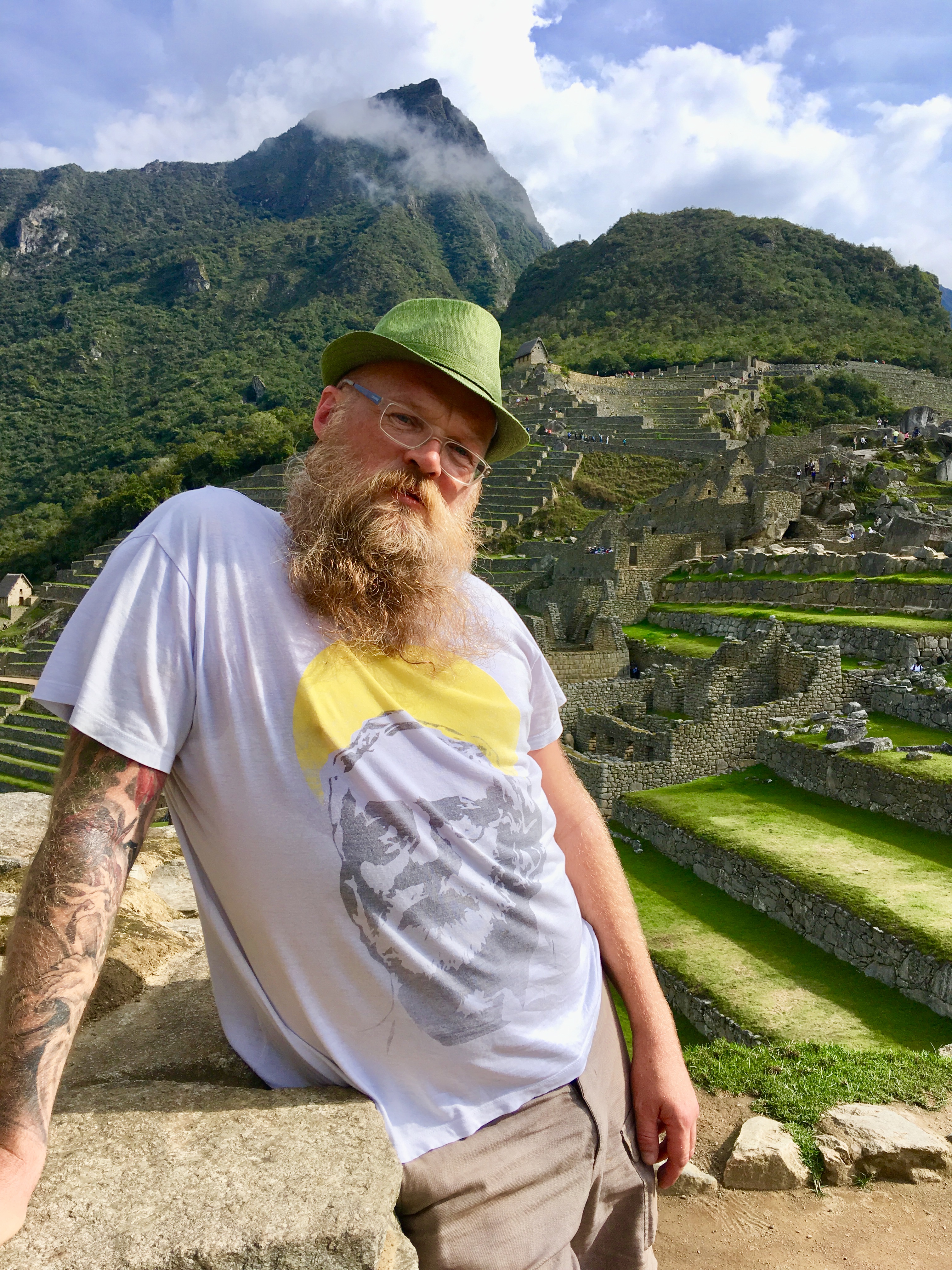 The bus journey up the mountain fed into my feeling of vertigo. While everyone kept pointing at the incredible views of the enormous mountains all around us I had to keep peeping briefly as I was feeling very sick. The buses drive this road all day everyday and know the numerous hairpin bends like the back of their hands but with the slight feeling of being tipsy from lunch I just couldn’t relax until we reached the top and alighted from the bus. Still I amused all my fellow passengers. We arrived and the views are so stunning. 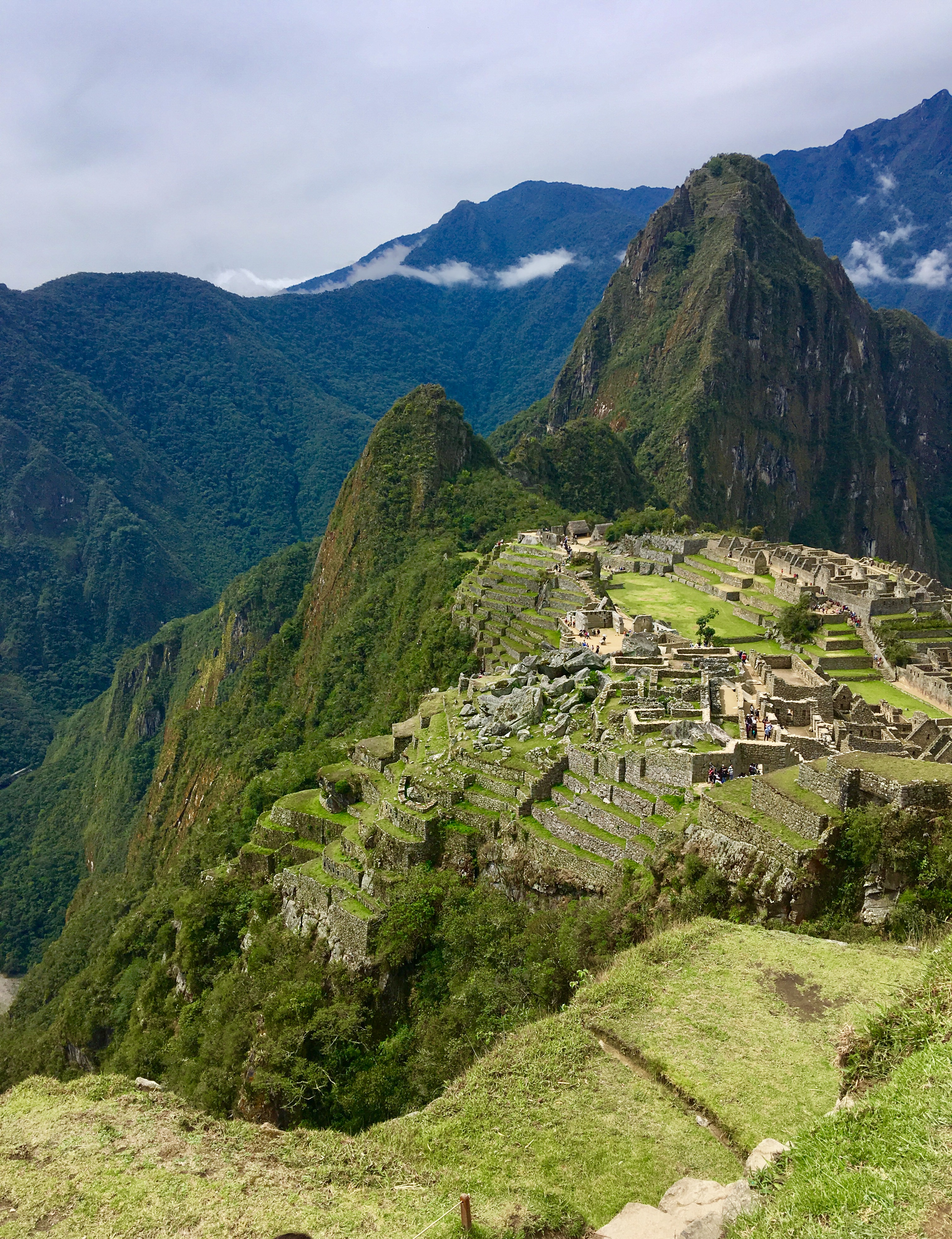 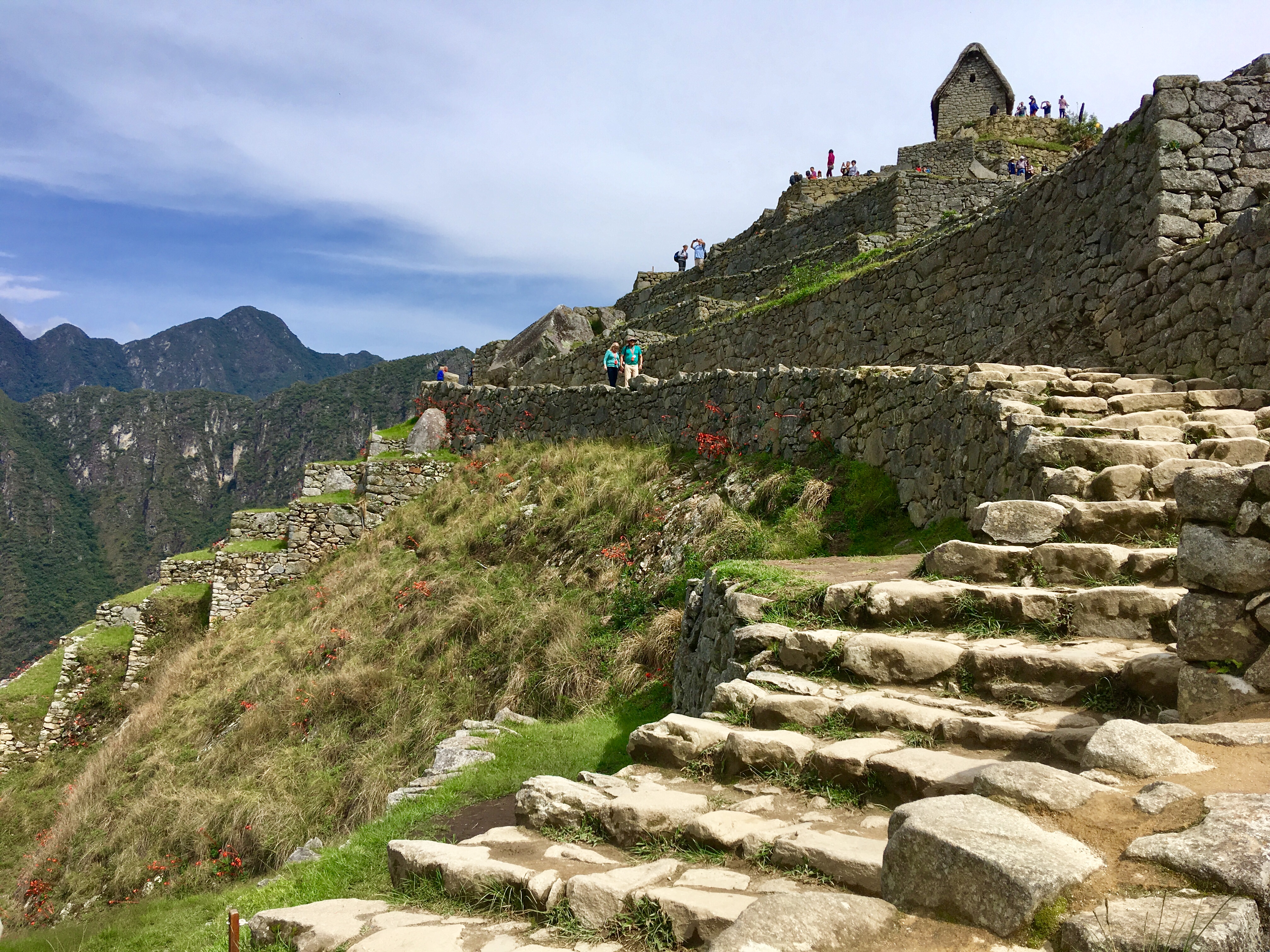 As most of the group required a Spanish speaking guide Arturo and I were the only two that needed the tour in English. This made the experience even more amazing. 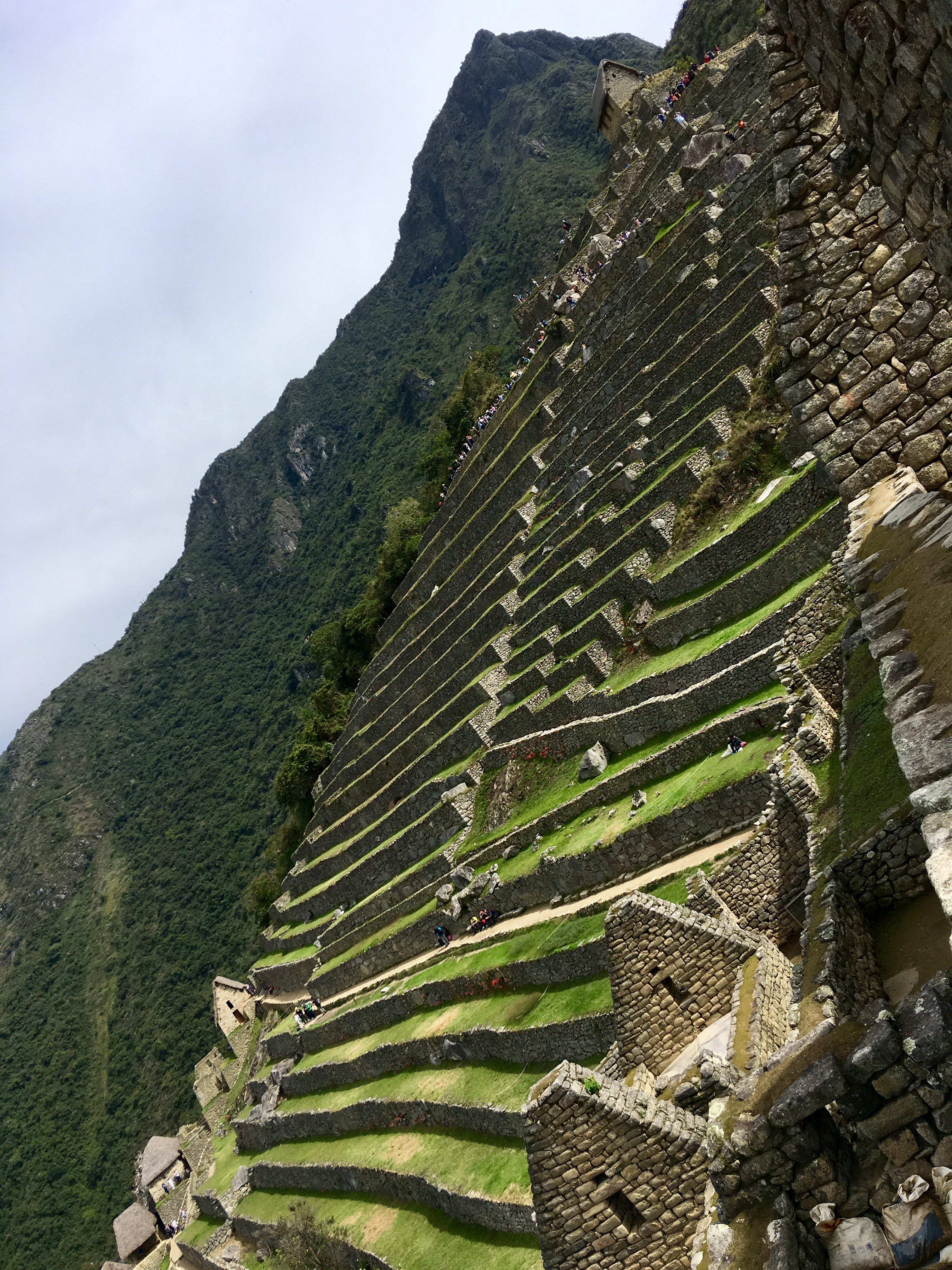 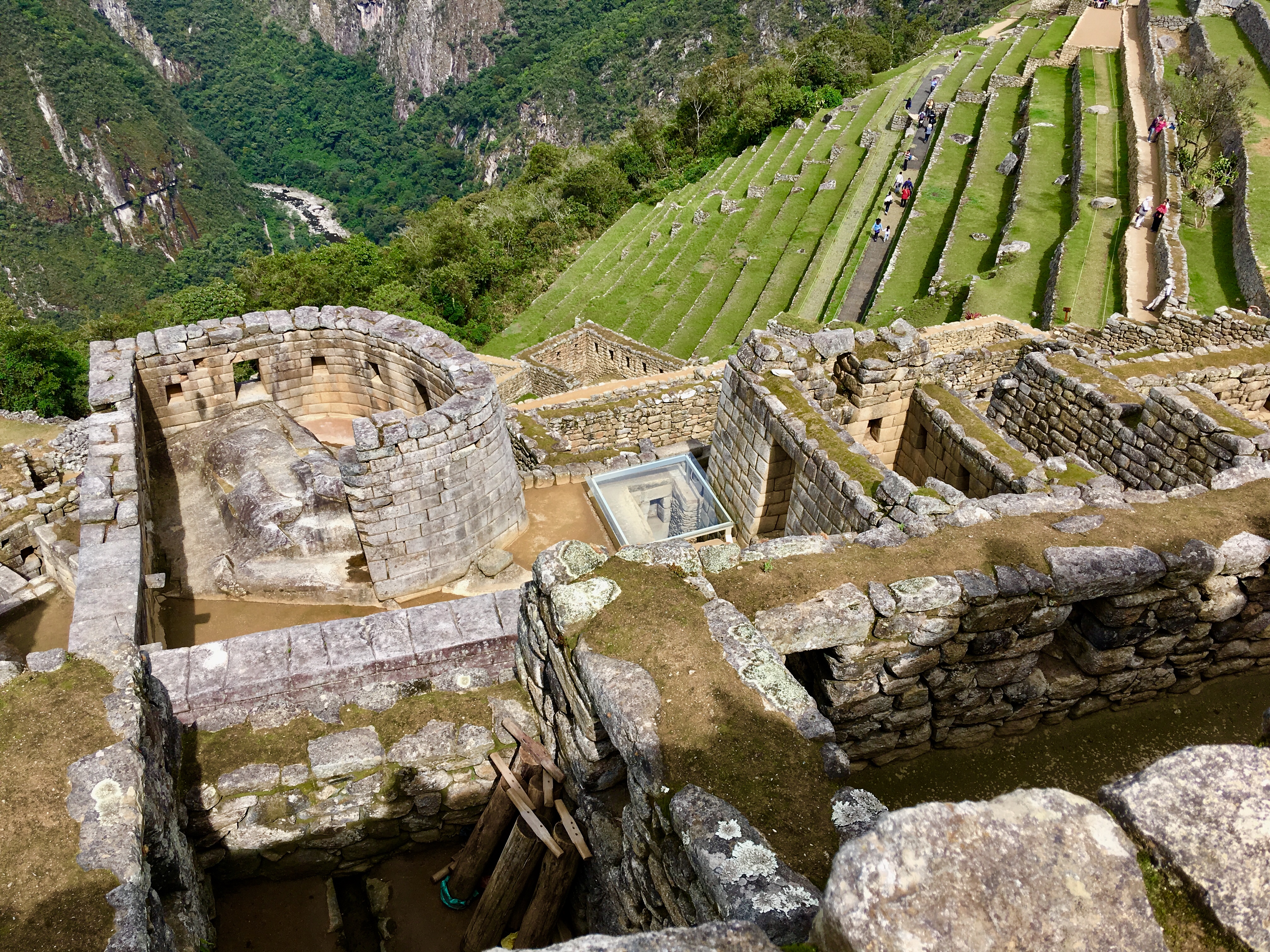 What can I say about this settlement hidden high up on a mountain surround by giant mountains on all sides. This is a destination that everyone should visit. It is totally without compare. Here’s how to make a magnificent mountain look tiny hehe. 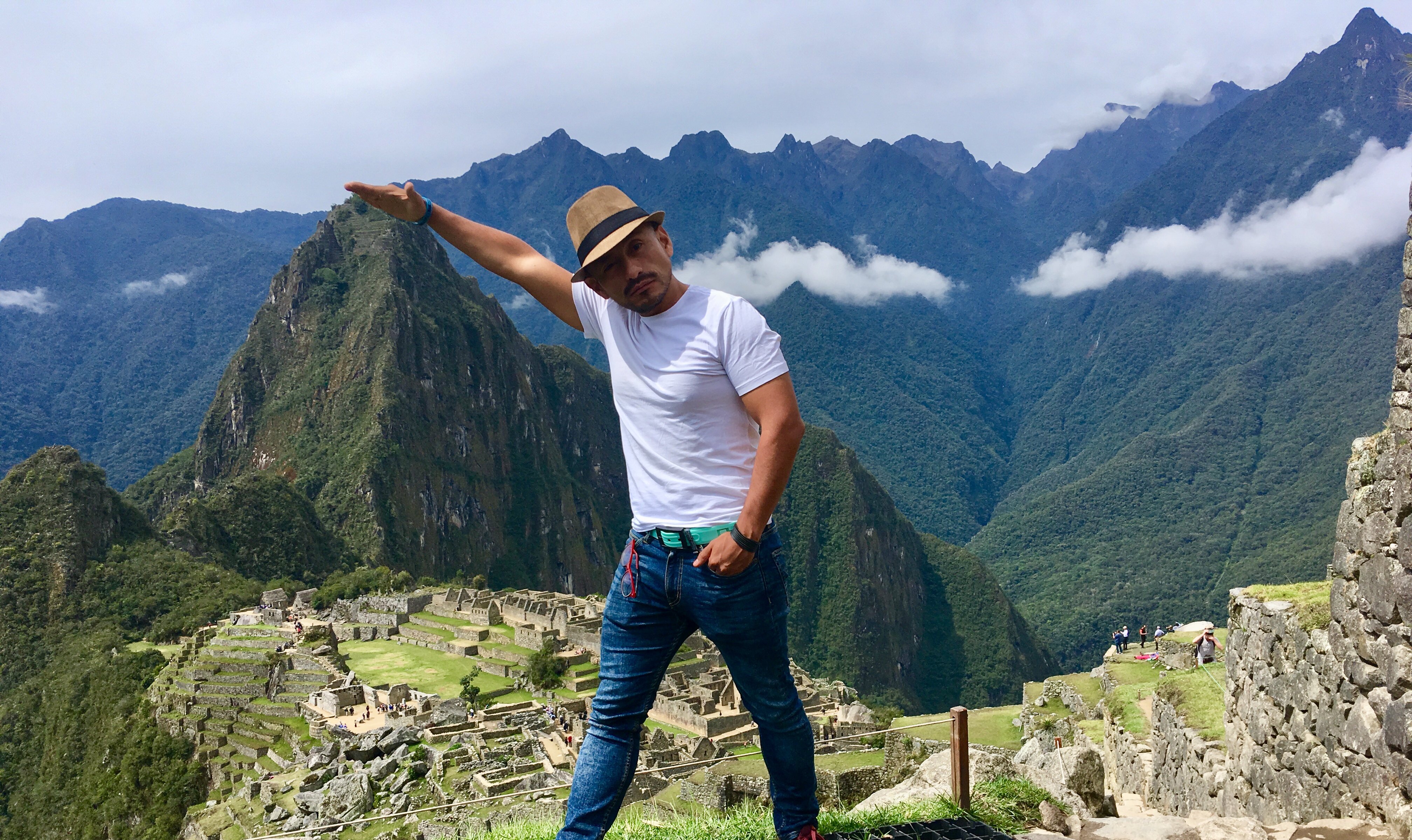 It’s was as the story goes rediscovered by the American academic and explorer Hiram Bingham in 1911. He was looking for an El Dorado when a local told him of an Inca world high in the mountains. On arrival there he found the settlement rather overgrown but inhabited by some locals. After all the Incas had built it with terraces of rocks that allowed the city to cling to the mountain edges and to provide spaces to grow foods. So it wasn’t really a lost city. it was a living one still. 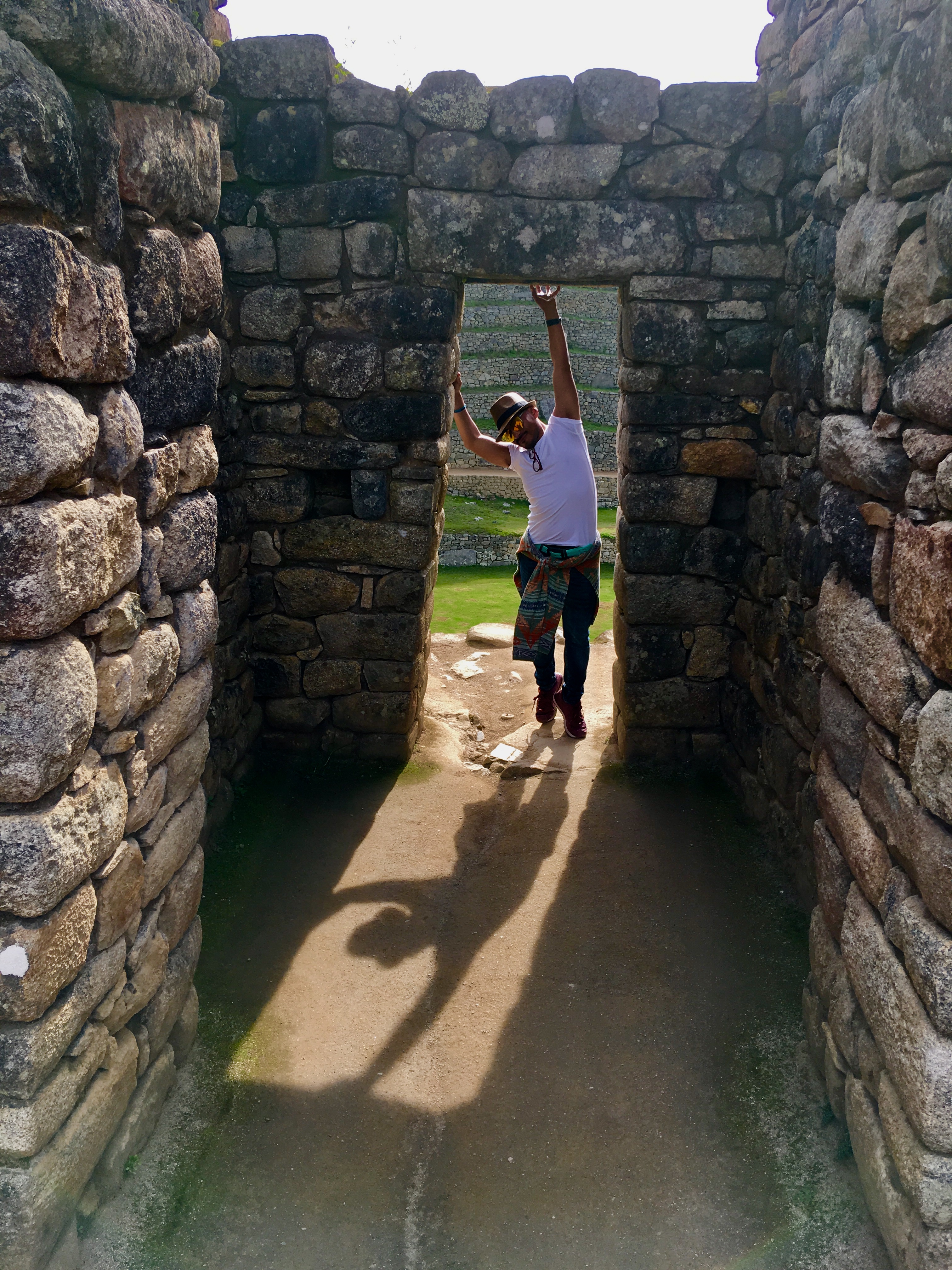 He stayed for several years to excavate it but he wasn’t an archaeologist given that archeology was a new growing science flourishing in Egypt at the pyramids. His early ideas were heavily based on the notions of Christian societies and he misinterpreted the many bones and skeletons there as only women and children and so claimed the settlement was most likely a convent. Later archeology has corrected many of the early misconceptions and a far better understanding of the site now exists. Including the fact that it was never completed and was systematically evacuated. They know that it was unfinished as several stones remain waiting to be finally carved. 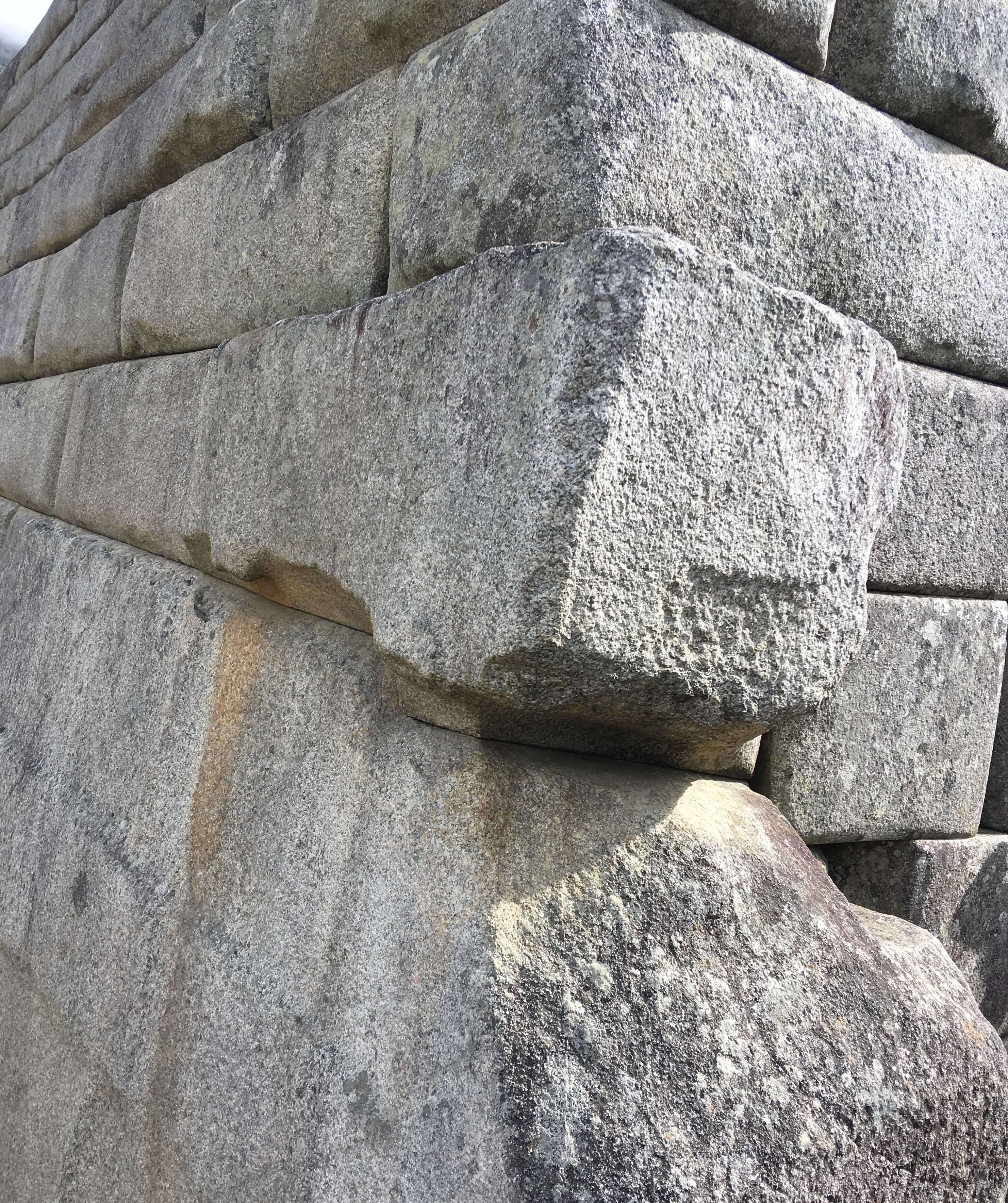 There are temples to the sun and alters to the many mountains around the site. Large rocks are incorporated into the structures of the buildings which as I’ve mentioned before are very typical of Inca architecture. This is the temple of the condor. The triangle on the ground represents the head and the natural rock and stones, the open wings. 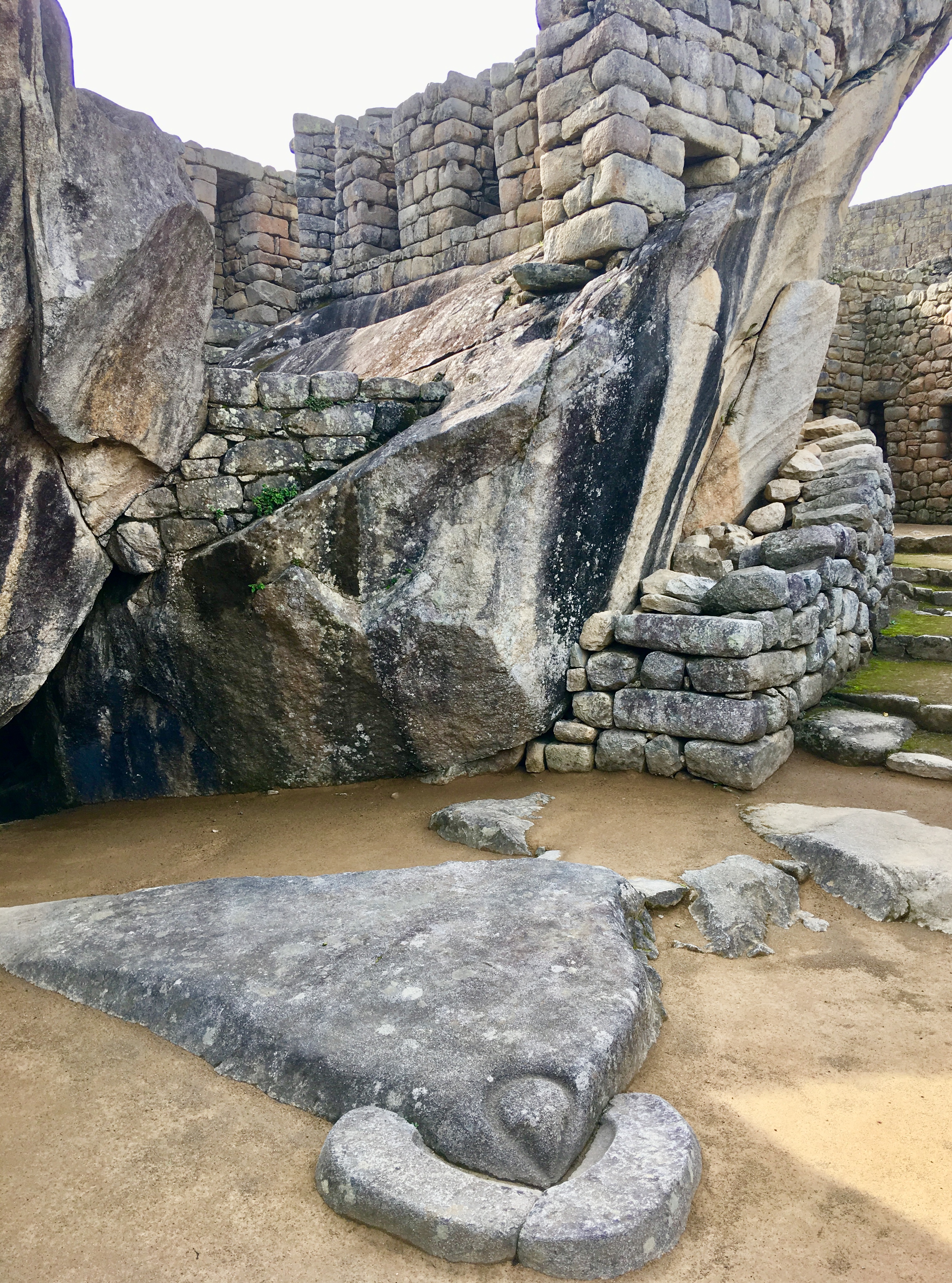 Their other great achievement is the collection of rain water to create fountains and springs in the city to provide water for the inhabitants and to nourish the food growing on their terraces. Remarkable and breathtaking vistas surround the city. At this altitude it really was breathtaking. At least for me. I did struggle a few times to catch enough oxygen as we clambered up the many steps to ever more dizzying heights. 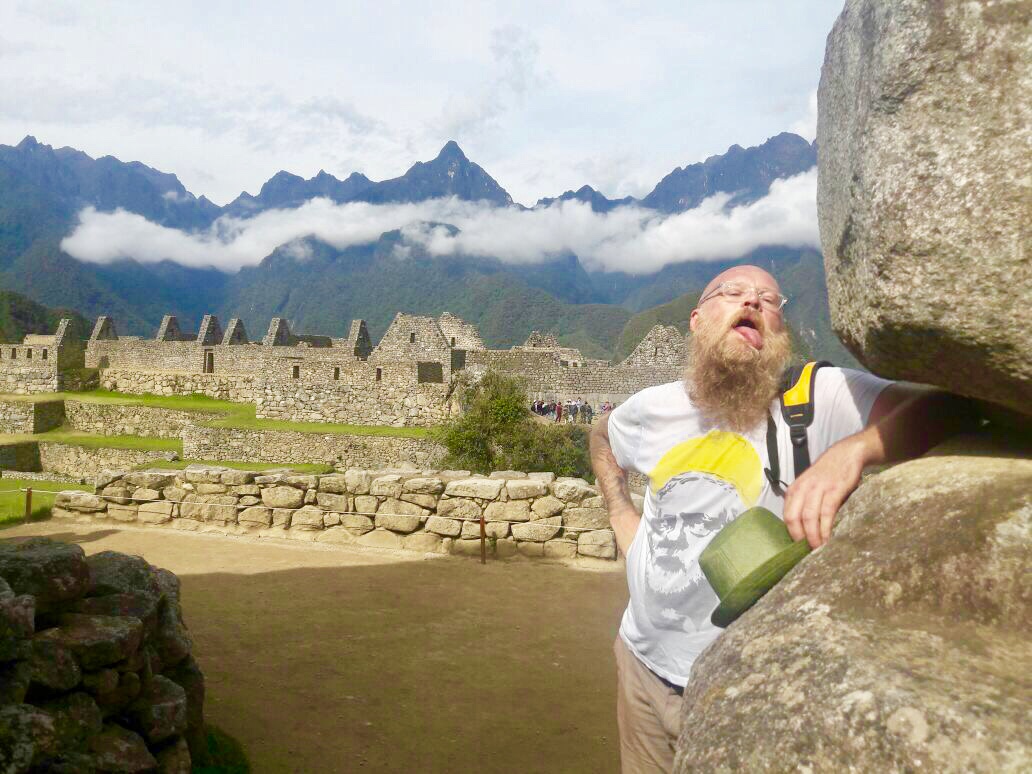 After the tour of the city we gathered in the Belmond Sanctuary Lodge for high tea and canapés before boarding buses to descend again to join the train for our return journey in the dark with dinner and music once more. And wonderfully my blue hat was returned to me at my seat. So now I have two hats. What a wonderful day and I really have to thank my wonderful new friend Arturo for helping to arrange such a perfect stay in Cusco and my trip to Machu Picchu. 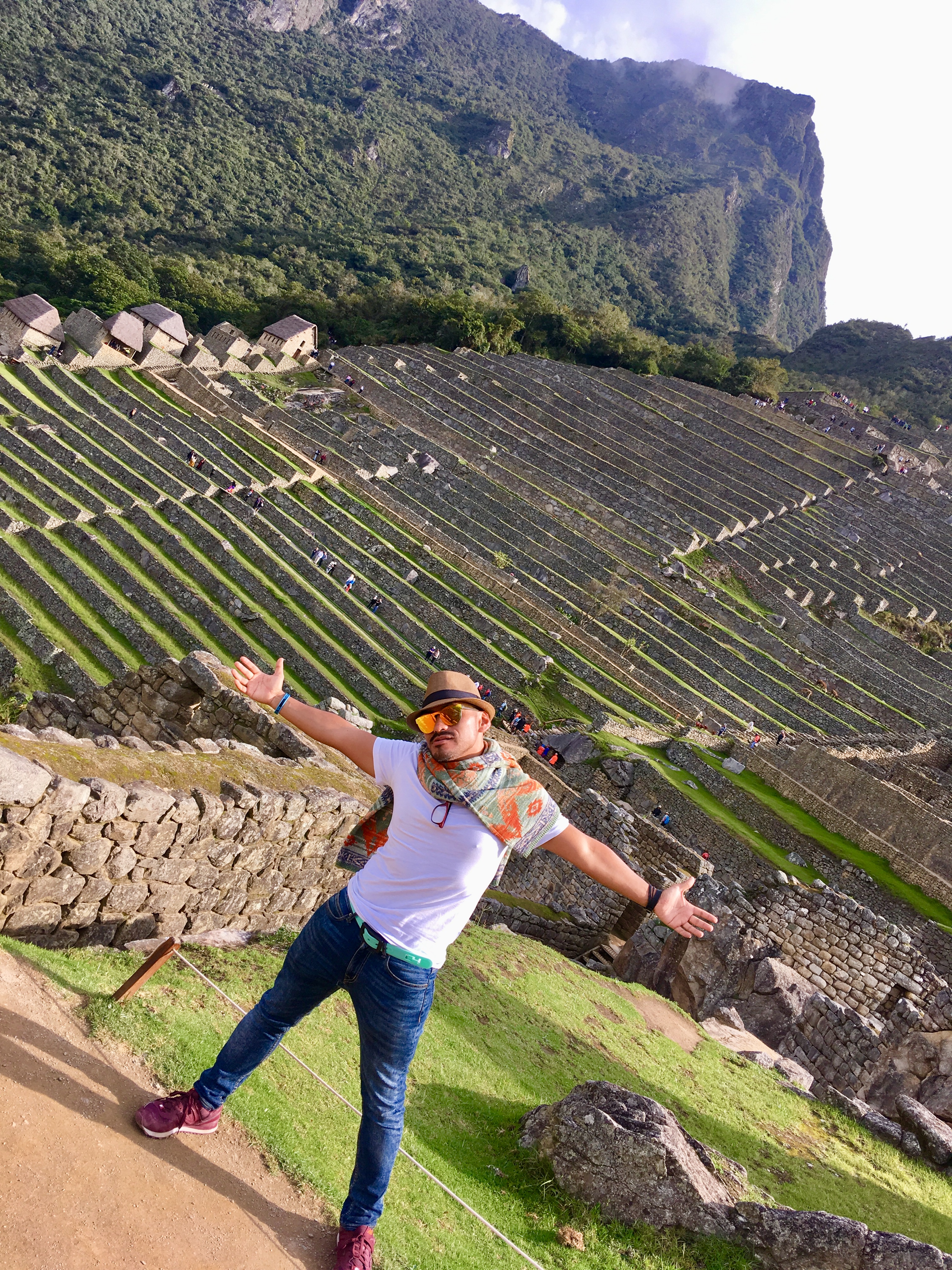 Own it Arturo. It’s in your blood. This place is your heritage. If you can when you travel try and find some wonderful local person to show you around. People from the area are full of wonderful stories, information and knowledge that would otherwise pass you by as a tourist. 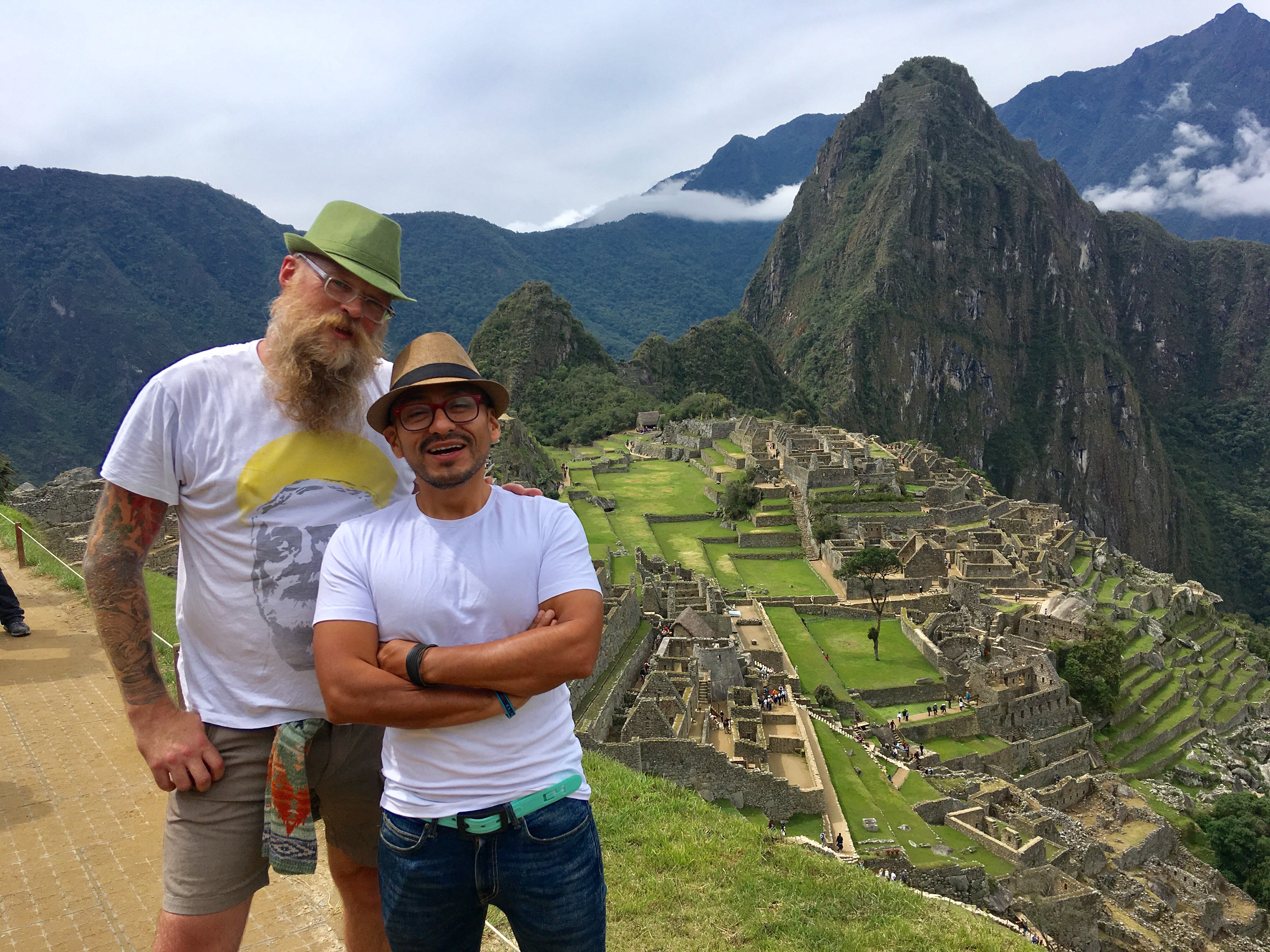 When you do decide to visit Machu Picchu I would advice you to book on the Hiram Bingham service for the most marvellous journey of a life time. Everything was taken care of by the most wonderful team onboard the train and the guides, buses and extras. Wow folks. It’s gonna be hard to top this experience but I promise to try. Llama bells are still ringing in my head though. 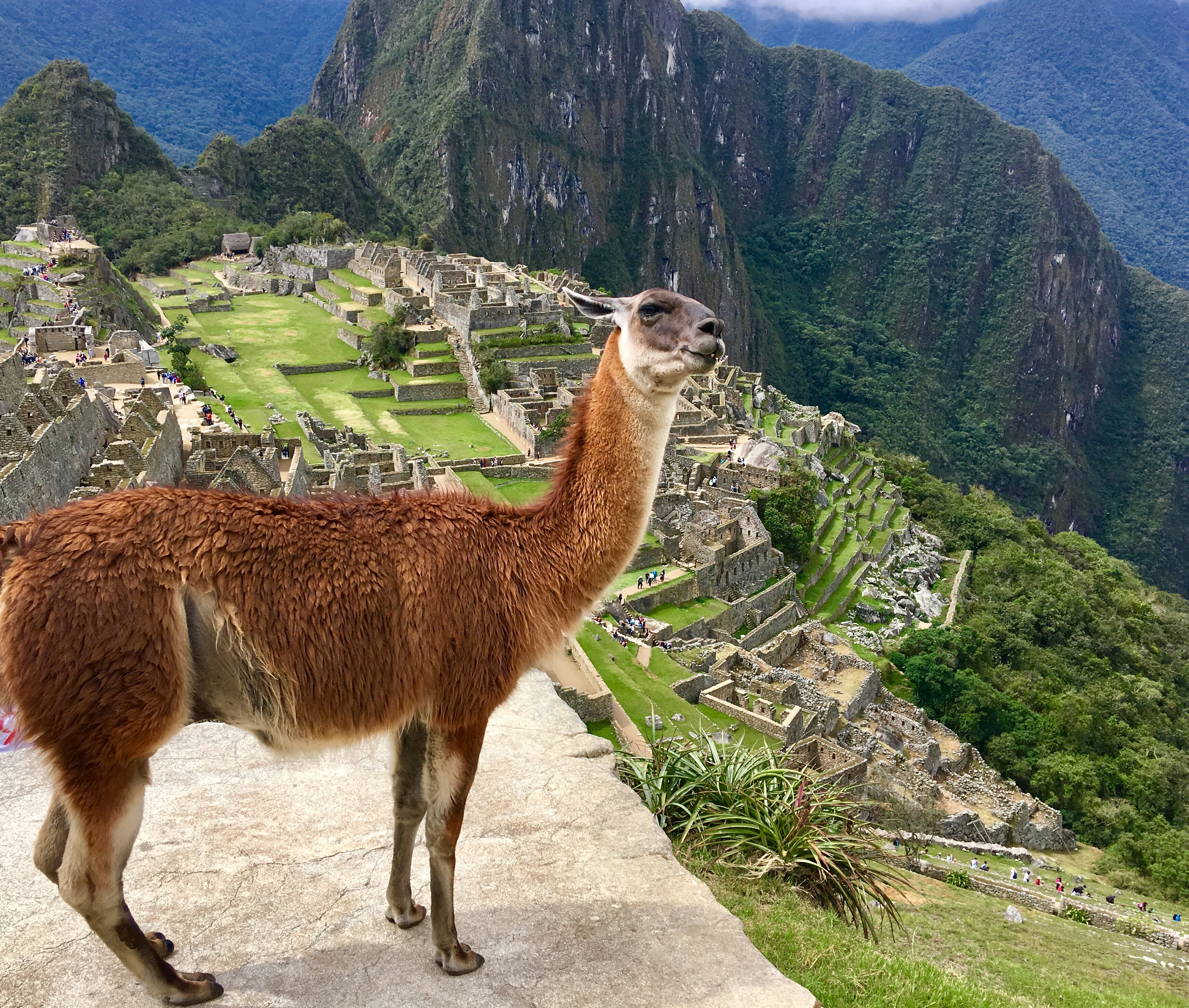 Having clocked my head a few days ago, a word of advice again to the tall. Wear a hat just so you are afforded a little defence against low doorways. 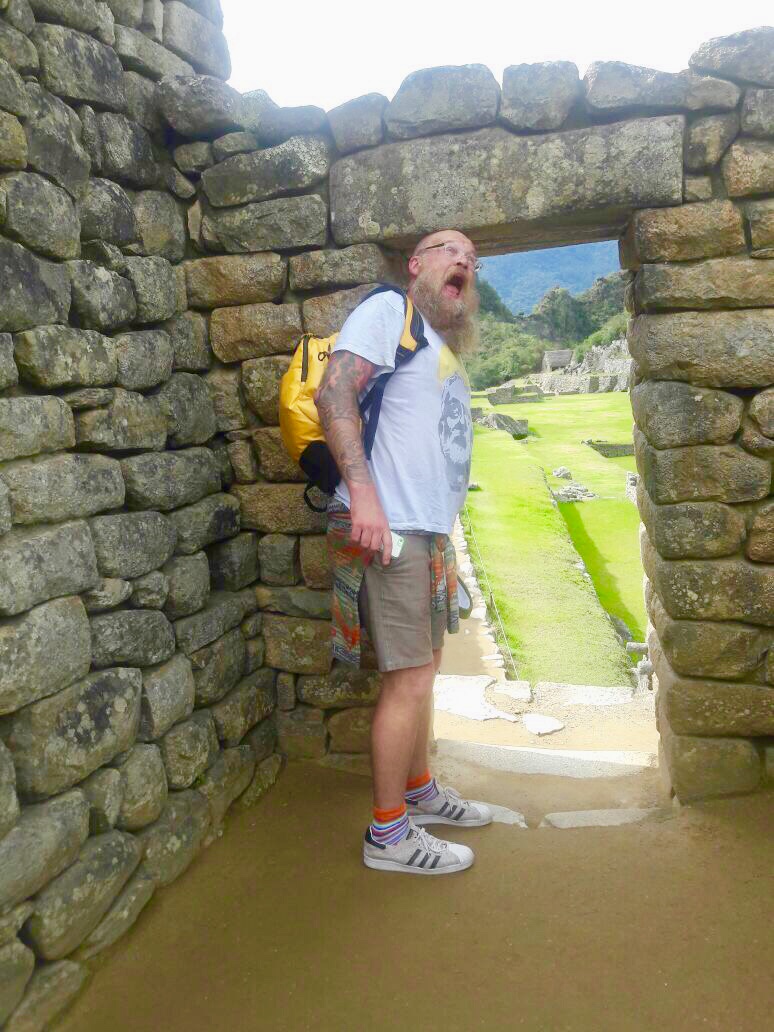