Today I woke up in Penzance. What a wonderful town, packed full of pirates. The town is really charming. Full of wonderful buildings, narrow hilly lanes,  endless terraces of Georgian and Victorian houses and some rather crazy buildings by eccentric past residents. 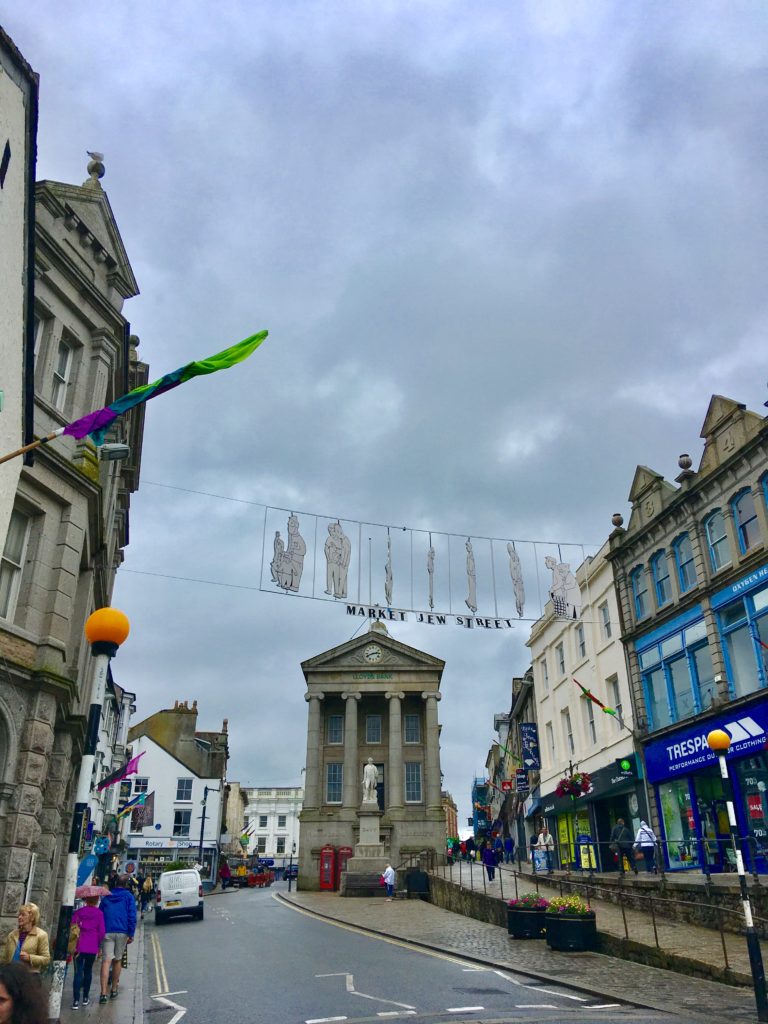 Sally said that I must visit The Minack Theatre in Porthcurno as she told me I would be utterly impressed. And I totally was. Not just the location, which must be the most impressive theatre location anywhere in the UK but the story behind it. It hugs the rocky cliff (the Cornish word for rocky is Minack) as it descends to the sea. And what a sea. Even in the rain today the waters are azure blue. One local lady told me she’d heard it was something to do with a particular algae in the tiny bay. Whatever the reason the sea looks so warm and inviting even on a windy, chilly day in late June. 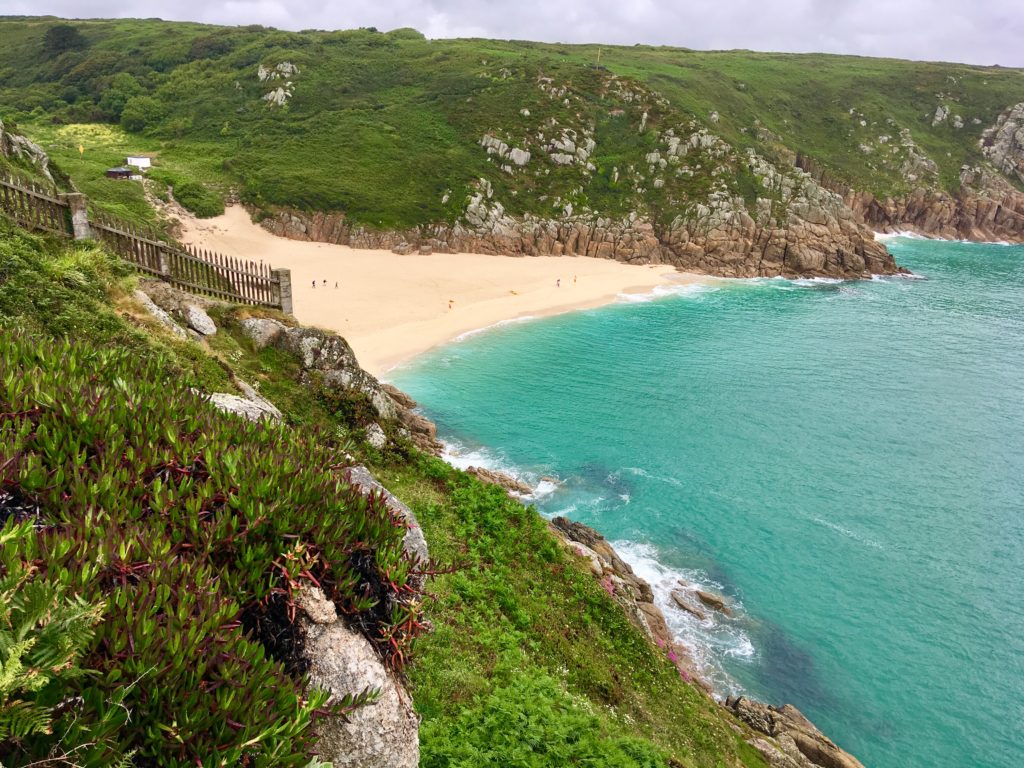 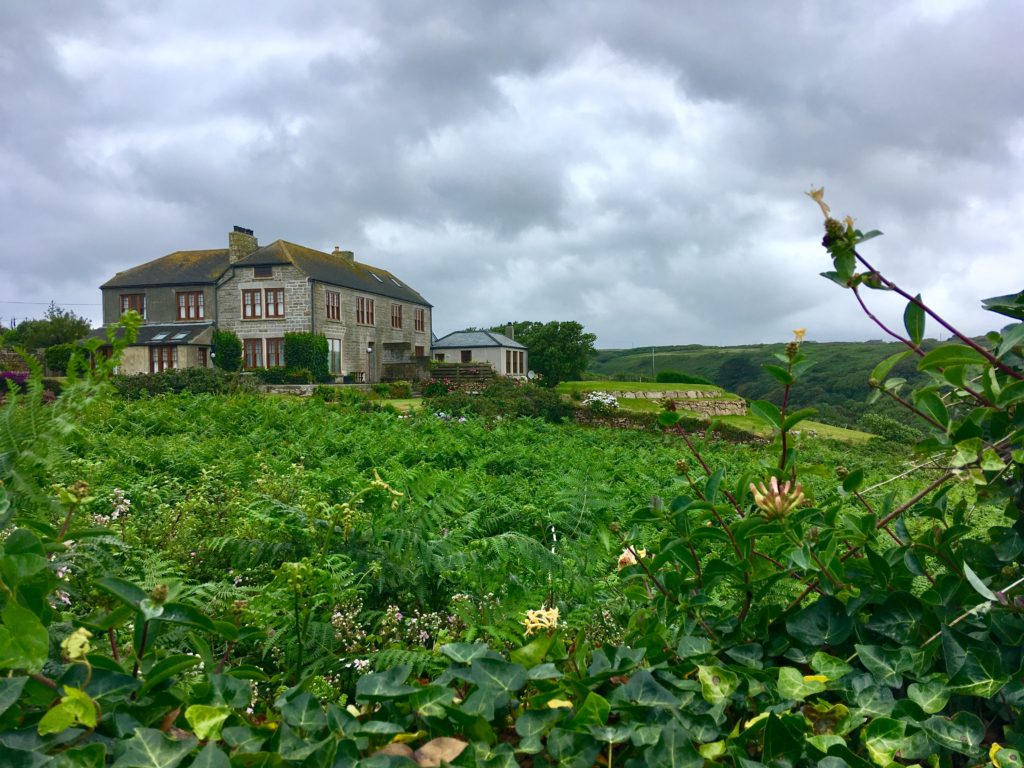 Rowena Cade (1893-1983) built a house on the cliff top for herself and her mother and in 1929 she and members of her family with friends staged a production of A Midsummer Night’s Dream in a grassy meadow near the house. The play was a great success and plans were muted to put on a production of the Tempest. Rowen decided that the perfect location would be the rocky cliffs at the bottom of her garden. Over the winter of 1931 and the start of 1932 she and her gardener, Billy Rawlings shifted granite boulders, moved earth and both tirelessly carried bucket upon bucket of sand up from the beach below to create the foundations of the lower terraces of the theatre. 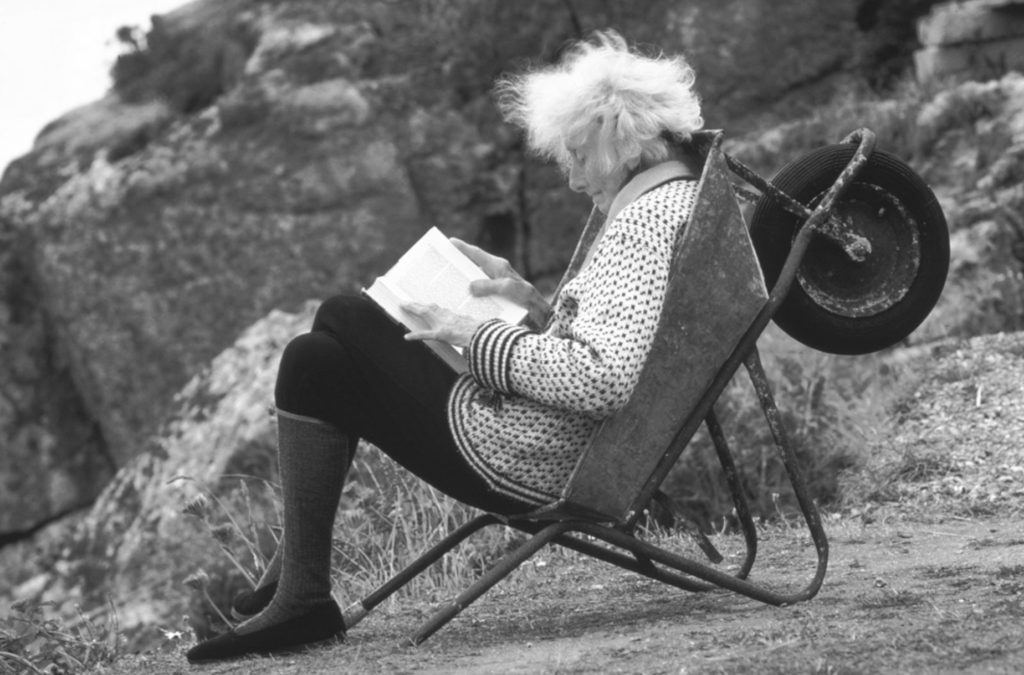 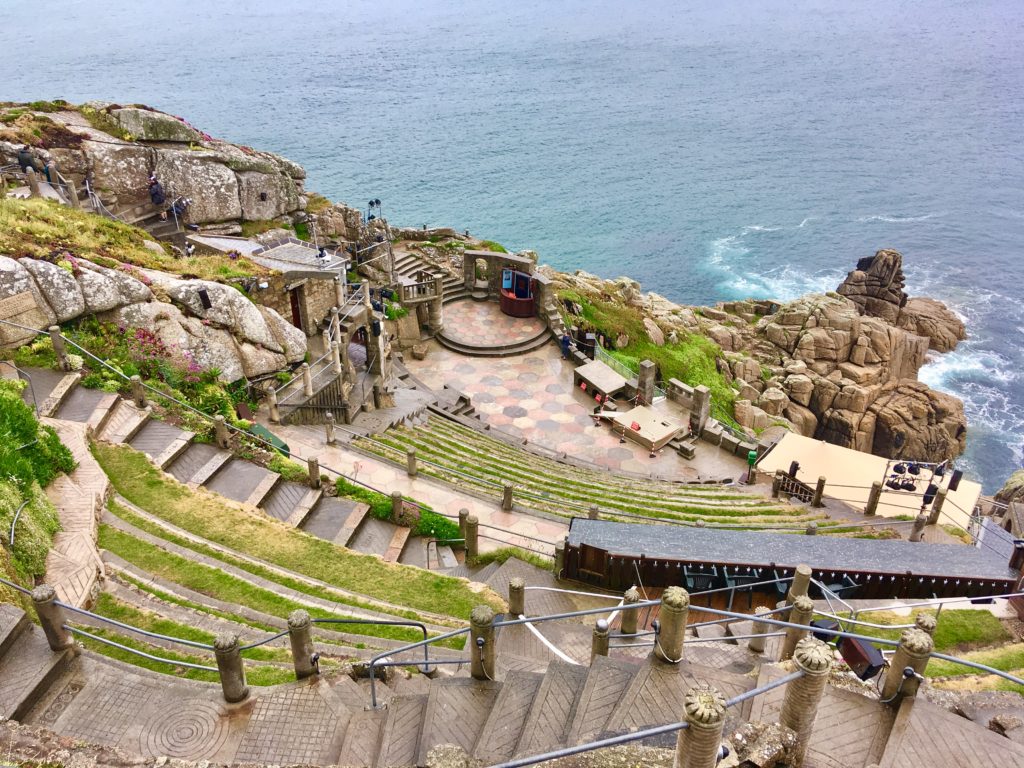 The Tempest was such a success it was reviewed in The Times. Over the next few decades with Tom Angrove, Rowena’s ‘Builder’s Mate’, the work continued and the theatre we see today took shape. 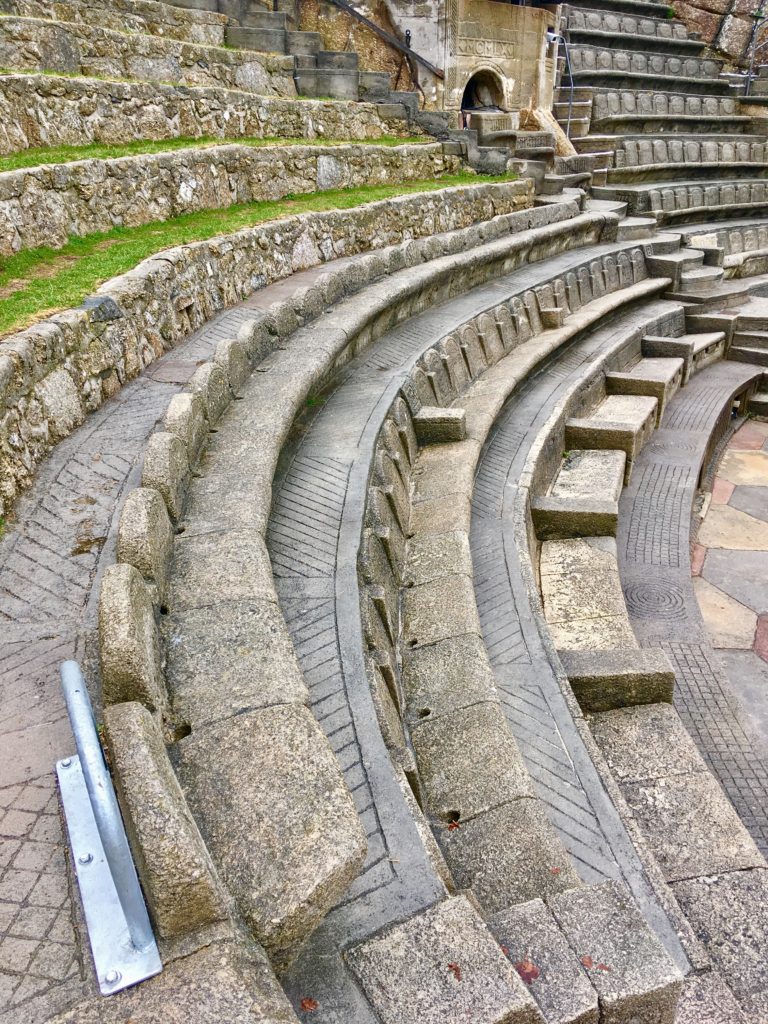 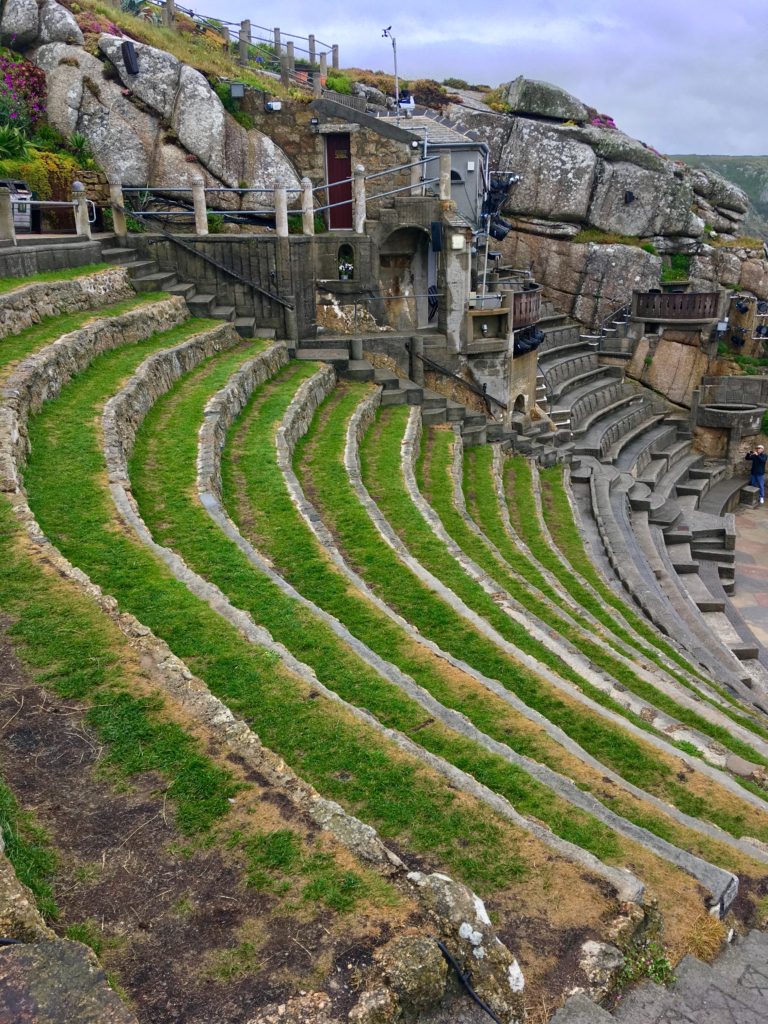 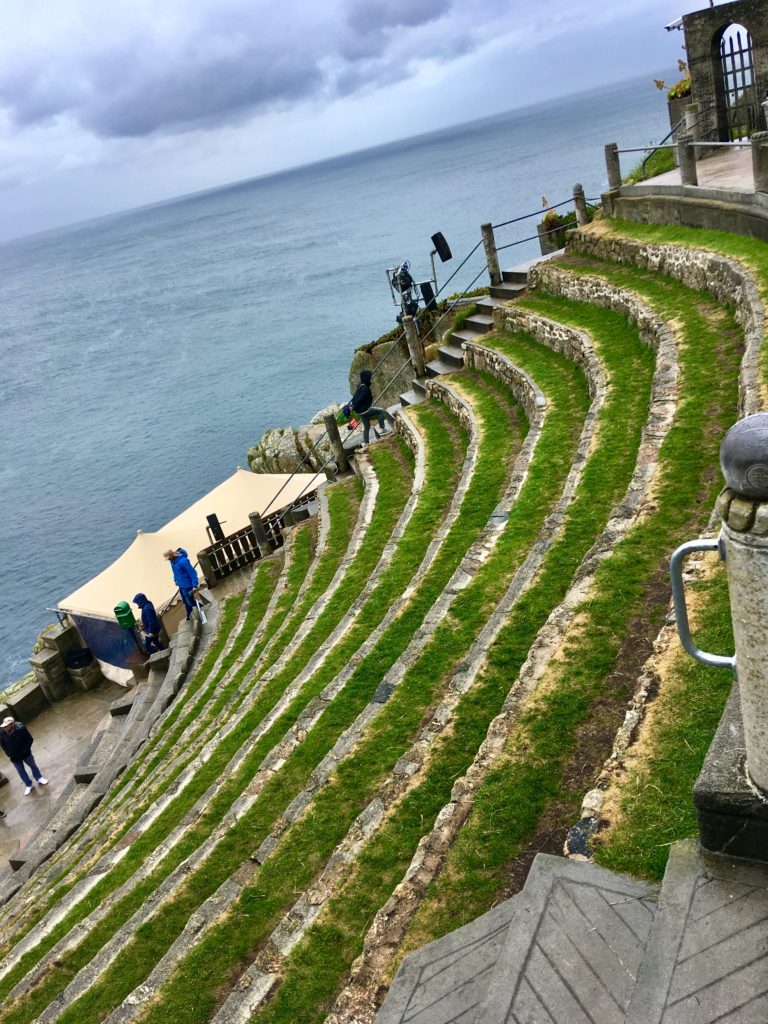 Tom recalled that Rowena carried twelve 15 foot wooden beams single handedly up from the beach to create the original dressing rooms. The beams were salvage from a Spanish freighter. Customs men met Rowena on the beach to ask if she had seen the timber. She admitted that she had carried some wood up from the beach and suggested that they come up and see it. Judging her to be too frail to hoist such beams up alone they went on their way without checking. She later remarked “I didn’t tell them a lie, now did I?” This ‘frail’ looking wonder woman worked tirelessly through each winter, in all weathers to continue building her dream until she was in her mid-eighties. What an amazing lady she must have been. 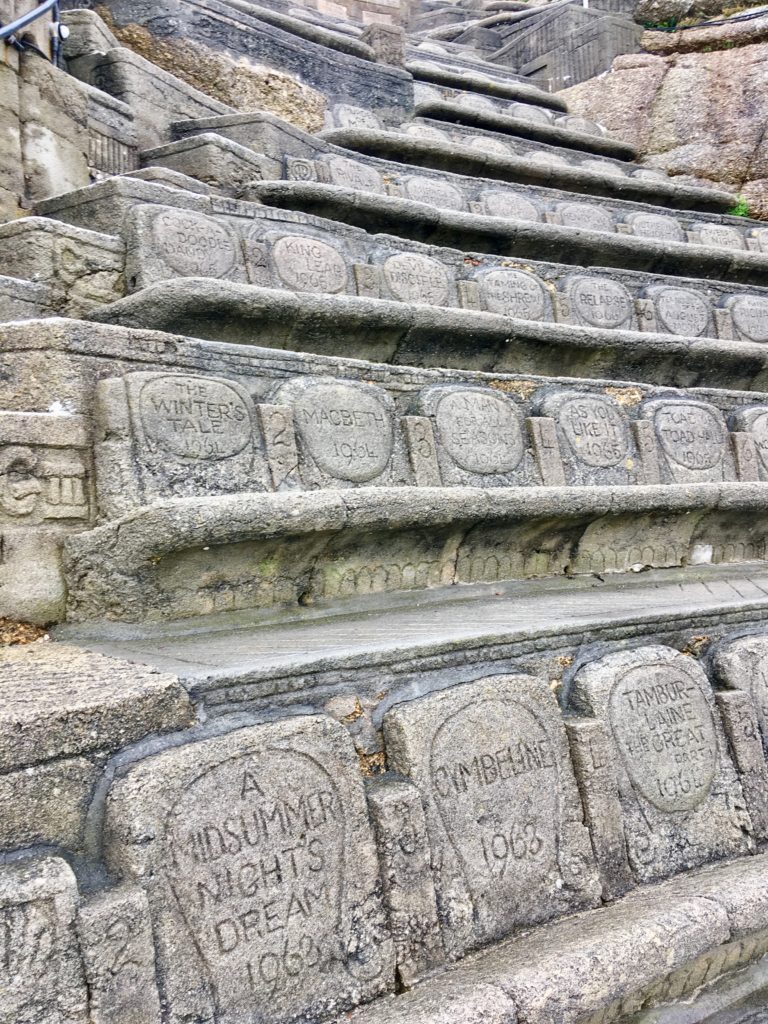 As the years passed and the number of productions increased, each show was literally written in stone in the back of the stone terraced seating. The steep banked seating is broken by huge beds of tropical succulents that create a sweeping palette of architectural plants and flowers. 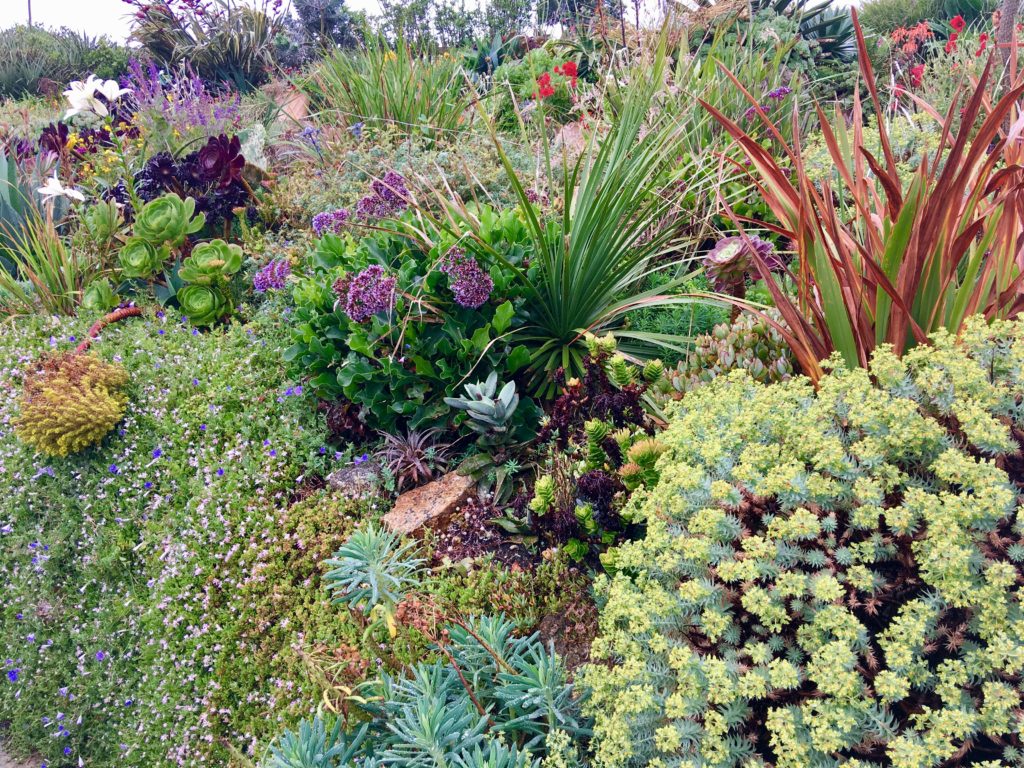 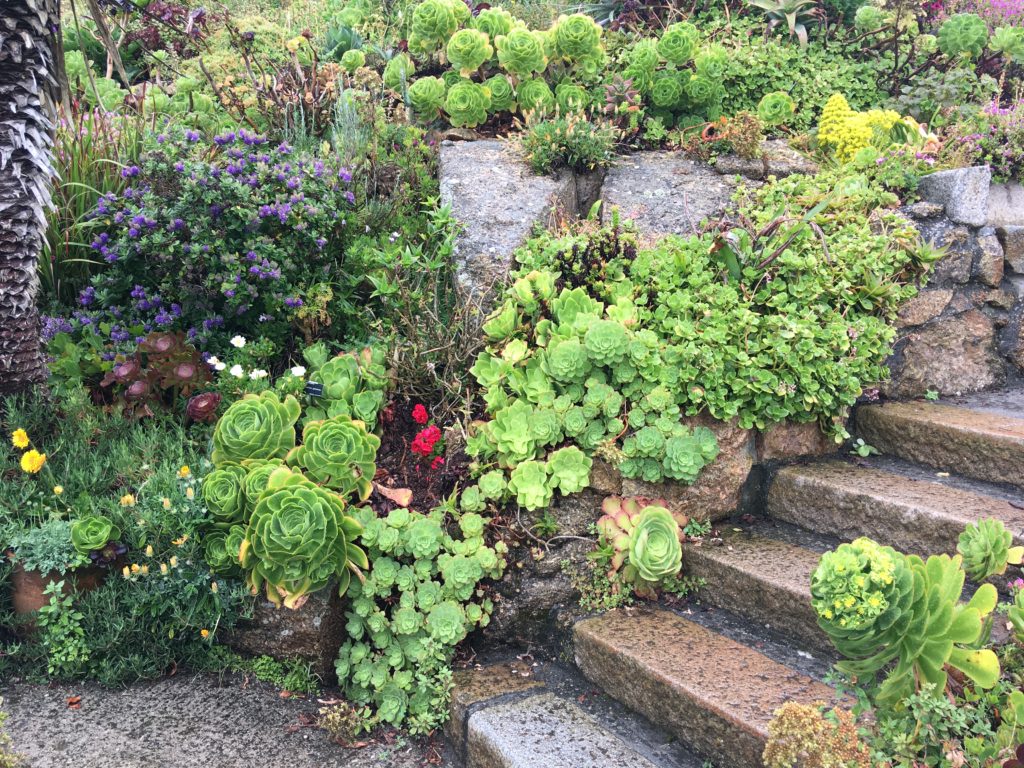 With all the rocky terrain and stone seating an essential part of the equipment needed for each show is cushions. Stacks of them. 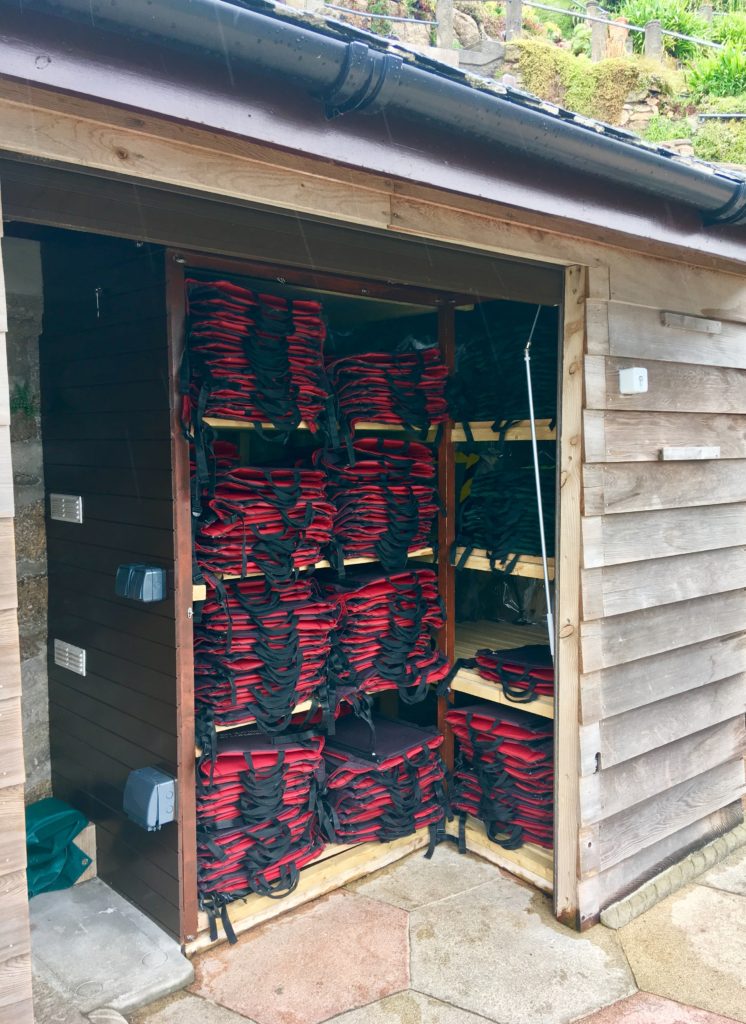 At the very top of the site there are modern toilets and a cafe that seems to float over the cliff edge like something from a Bond movie. 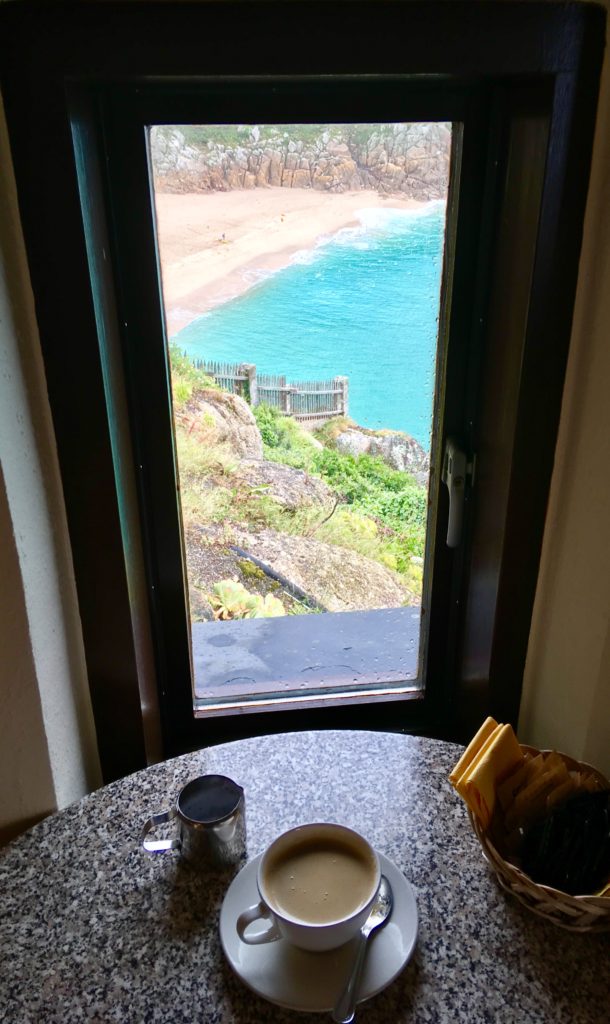 I was so impressed with everything about this theatre. The location, the space, the design, the seating, the facilities and most of all the vision of one woman and all that she achieved. 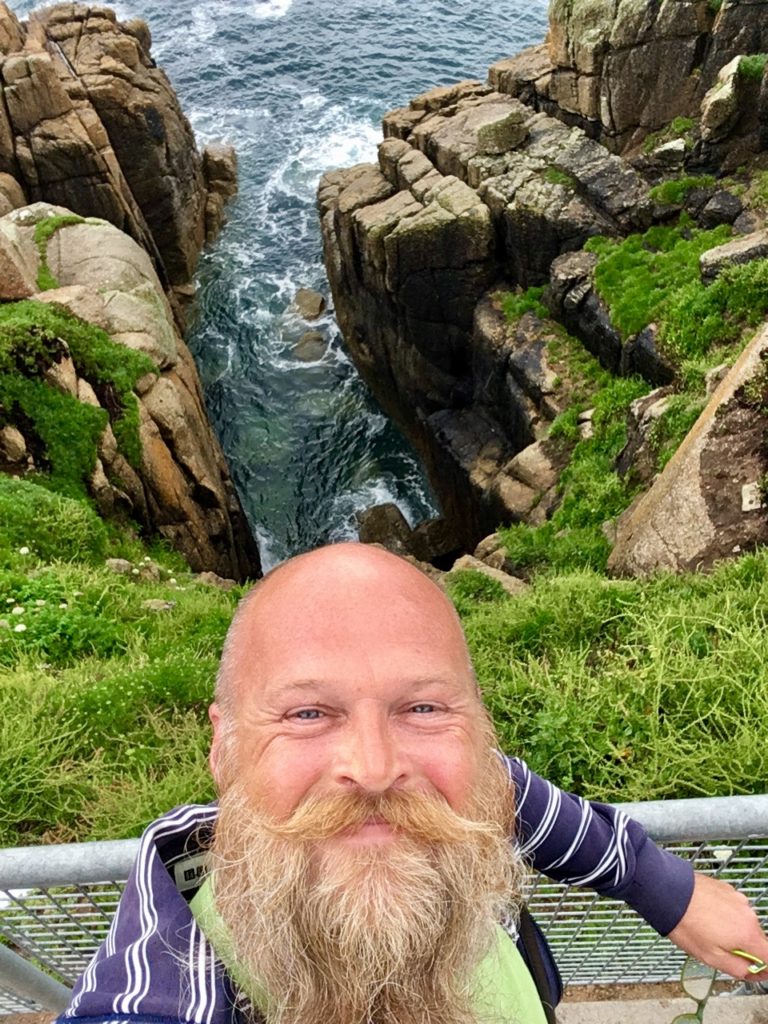 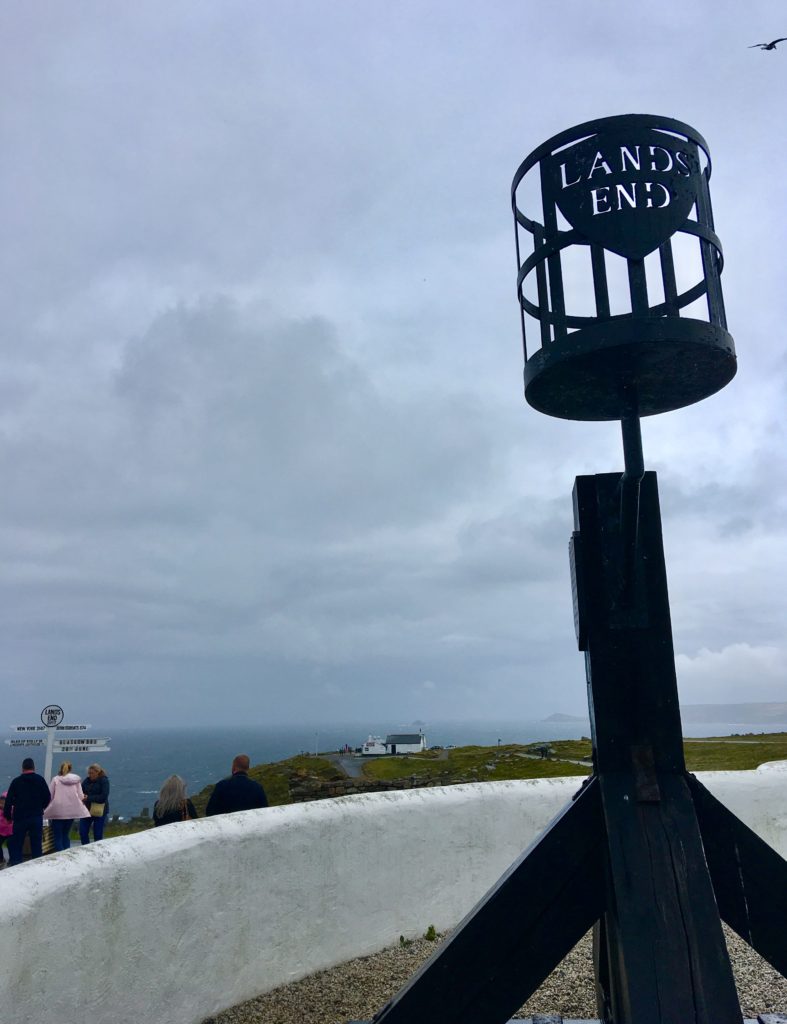 Just a few miles away is Land’s End. I thought it would be churlish not to visit there too. 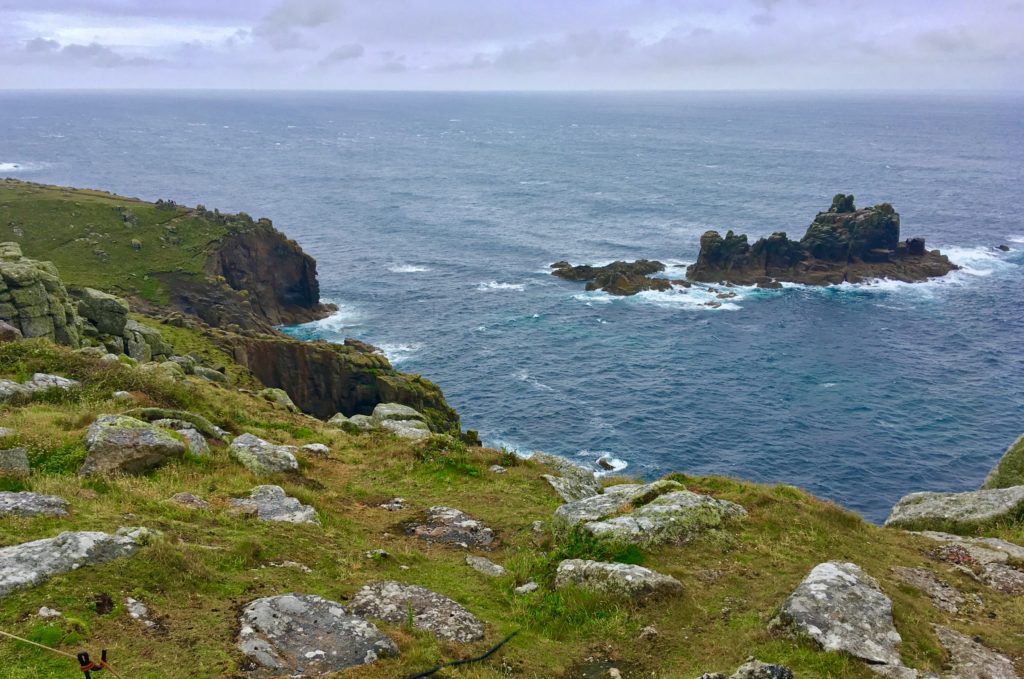 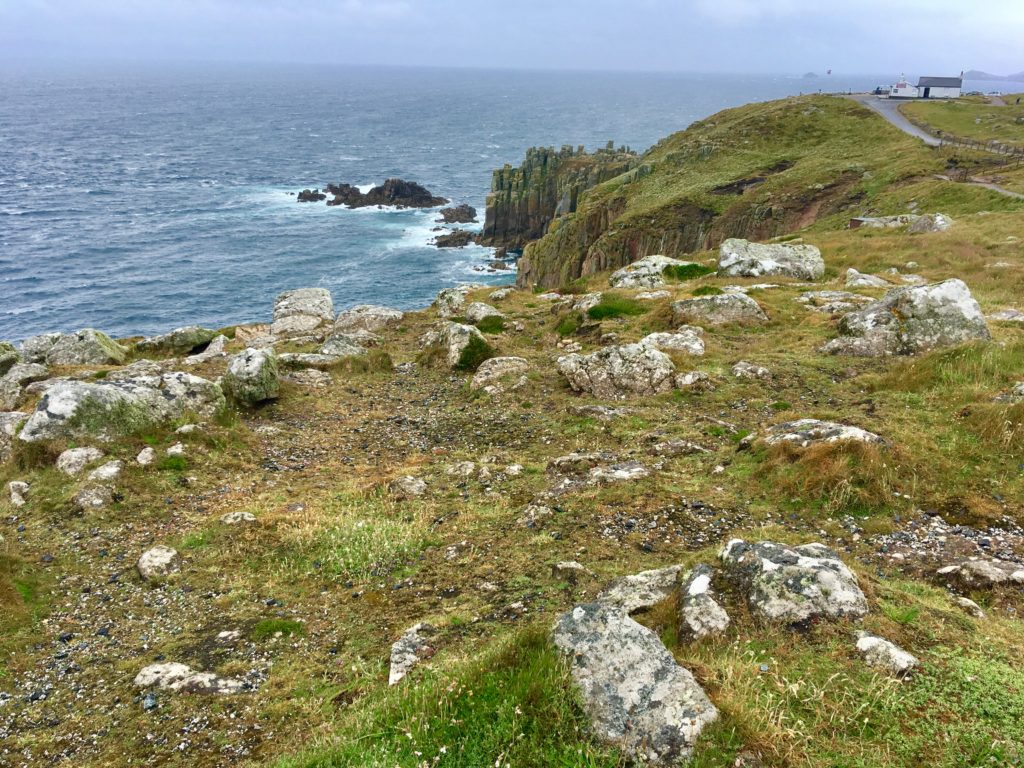 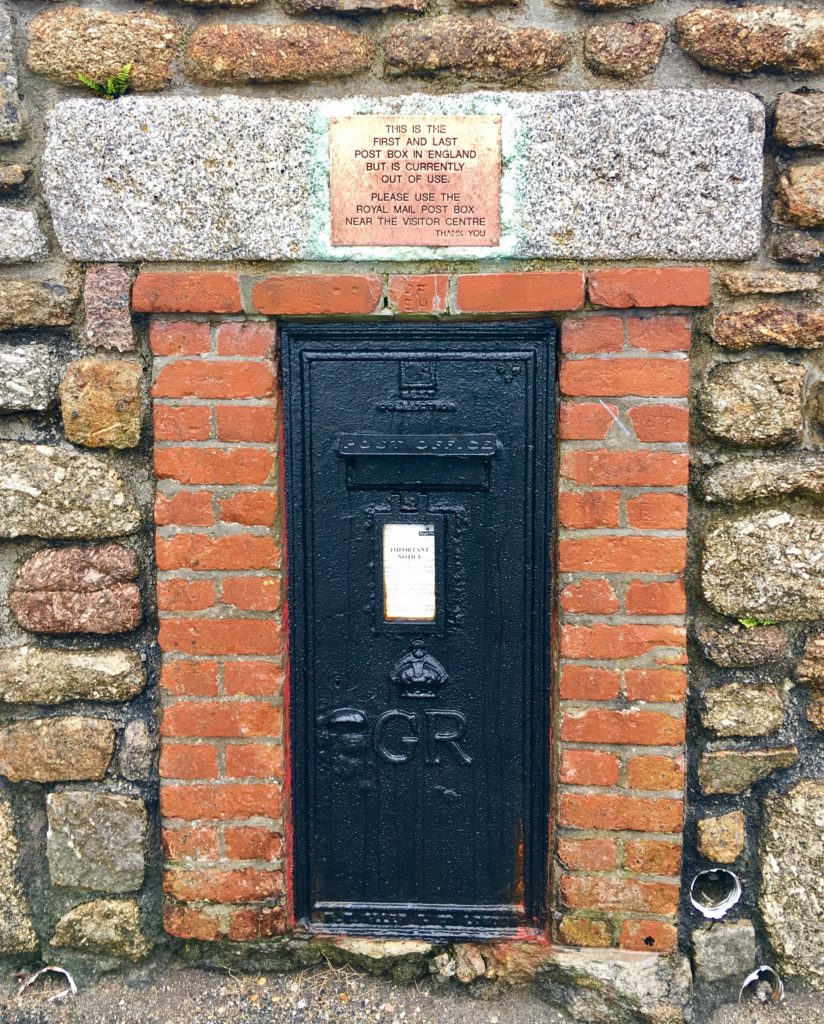 After the sheer glory of the Minack I was rather disappointed with this iconic landmark. Not the natural beauty of the place which is rugged and wild but the commercial buildings that have been added over the decades. It would be great fun for children though and is the most South Westerly point of mainland Britain. 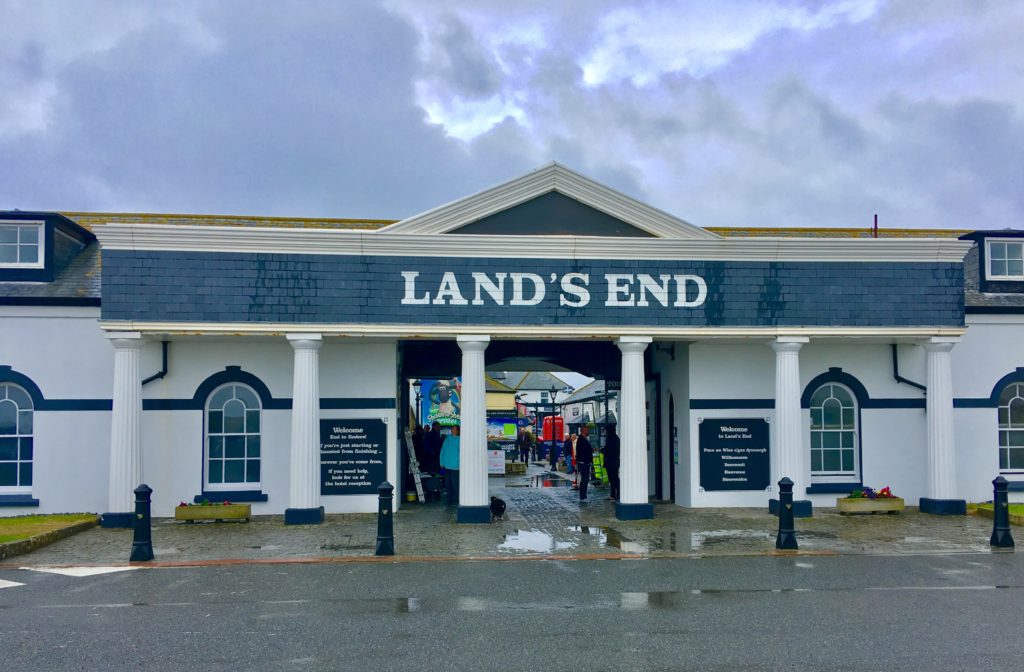 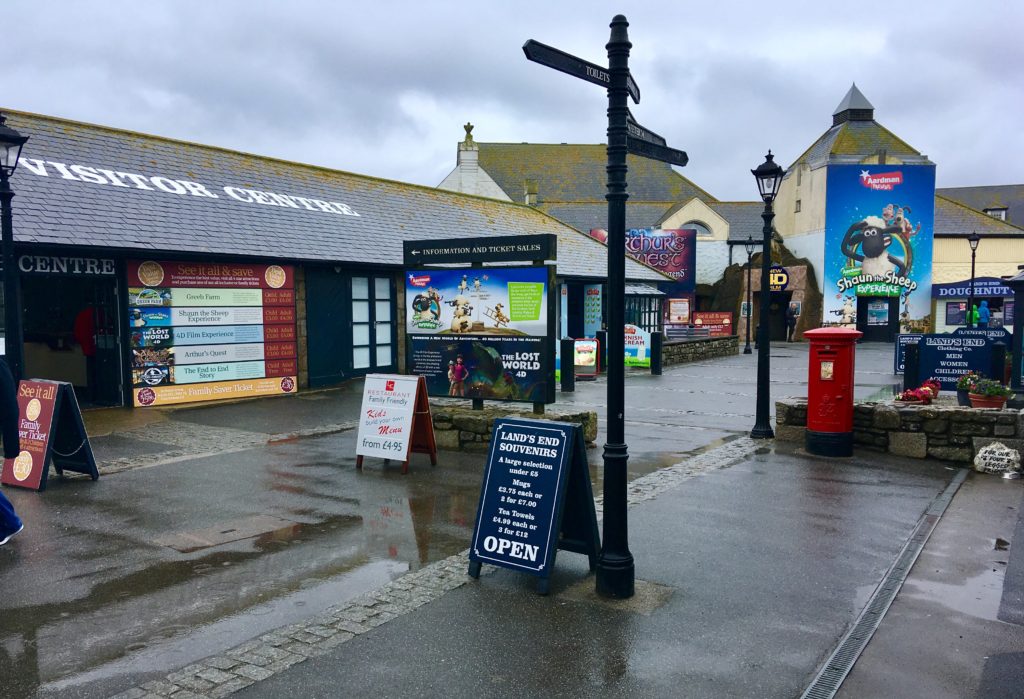 It did however make me laugh in the exhibition about the many people who have famously walked there from John O’Groats. Seeing Steve ‘Naked Rambler’ Gough so proudly displayed, though pixilated as he has been arrested many times for not wearing clothes while walking. Here behind glass was the only clothing he did wear. His boots! 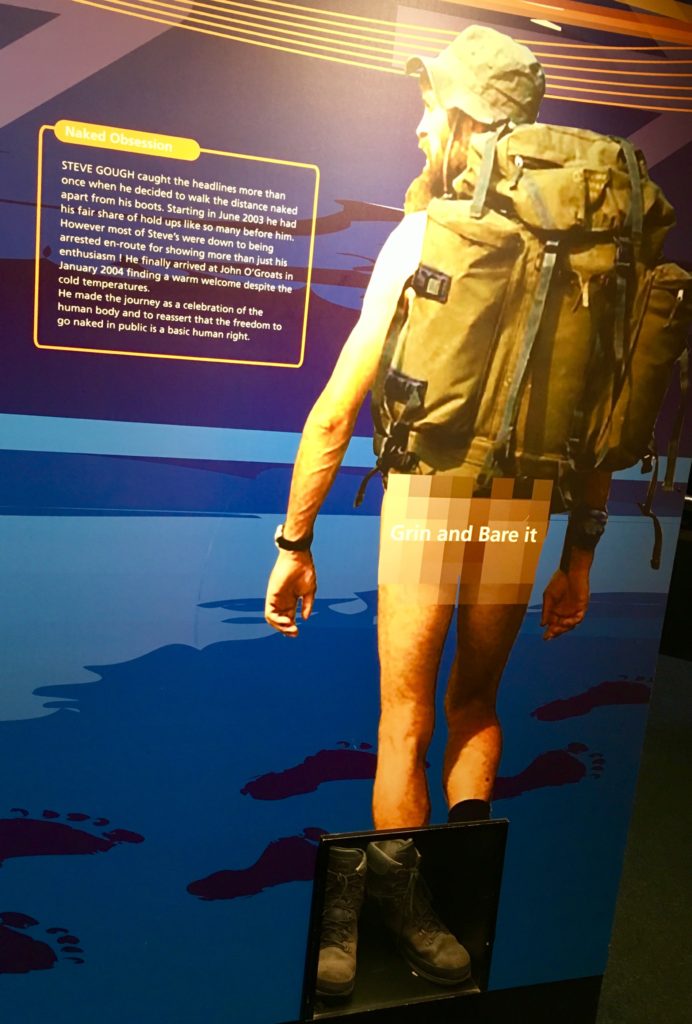