Today I set off to get my first proper look of Historic Dover. I strolled down the road and began to think I’d got lost already. UH! 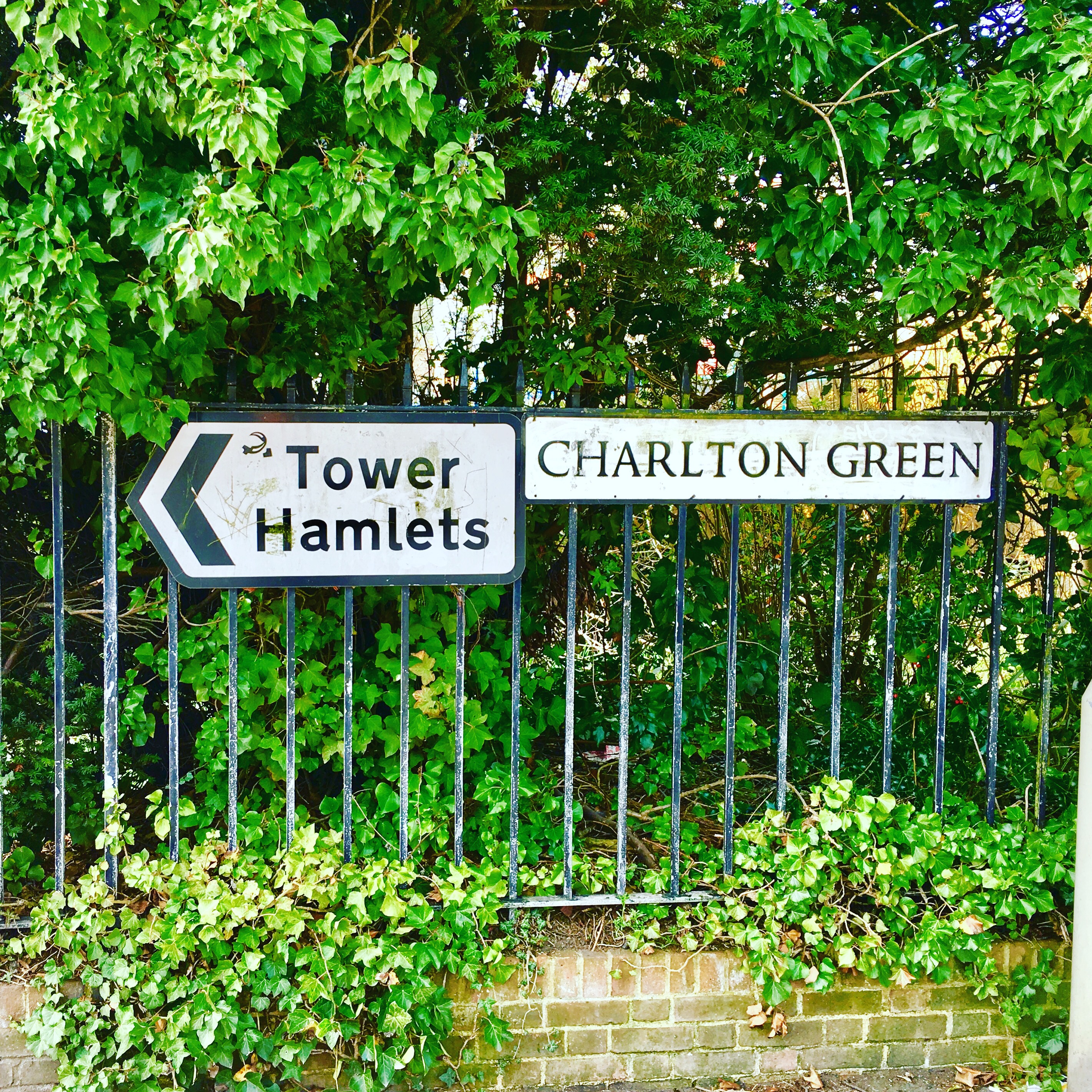 So where am I?  London or Dover? Having really only ever been to limited parts of Dover, the entire town was just Dover. I hadn’t thought about it being made up of differently named locales. So my education begins today with  this. Note to self – All towns have their own historic areas with their own names. I feel sleepy still. Need a coffee. A quick whizz into town and at least I’m already feeling more welcome. 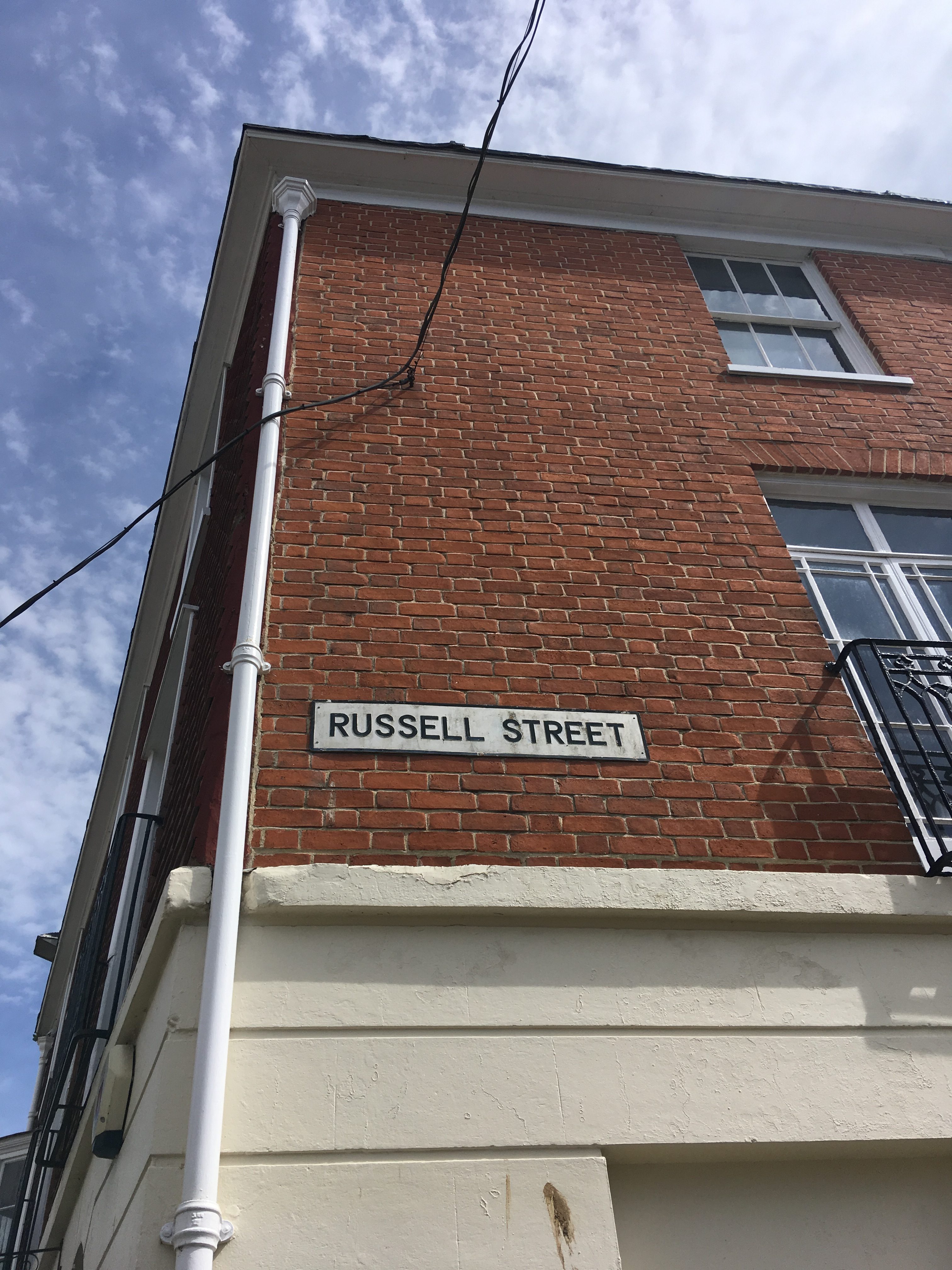 Sign was too high to squeeze myself in and I definitely needed a good strong coffee to wake my face up before the camera turns on me. So I whipped out my phone and opened the Bean Hunter app to resolve the burning issue: Where in Dover serves the best coffee? 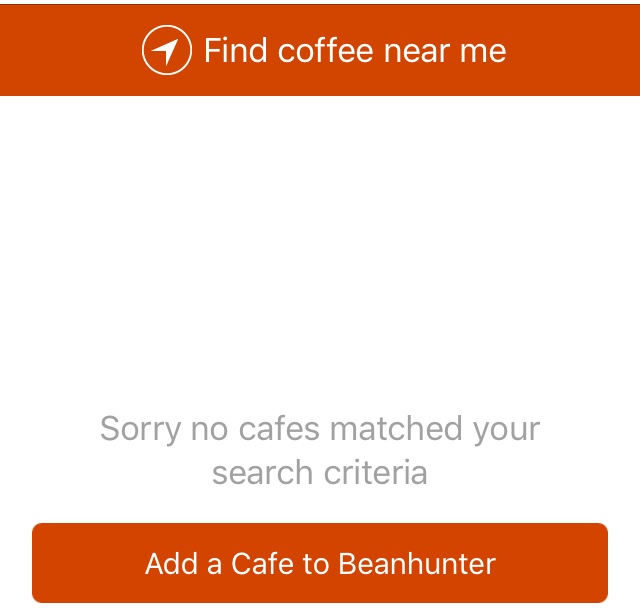 And sorry to say that so far, a coffee worthy of adding to your app eludes me. I love living in Sussex but my county of birth is Kent. And I whop the air whenever I pass a ‘Welcome to Kent’ sign. I often sing to welcome myself home too. So I was unable to resist this butcher’s sign. Grow up Russ. 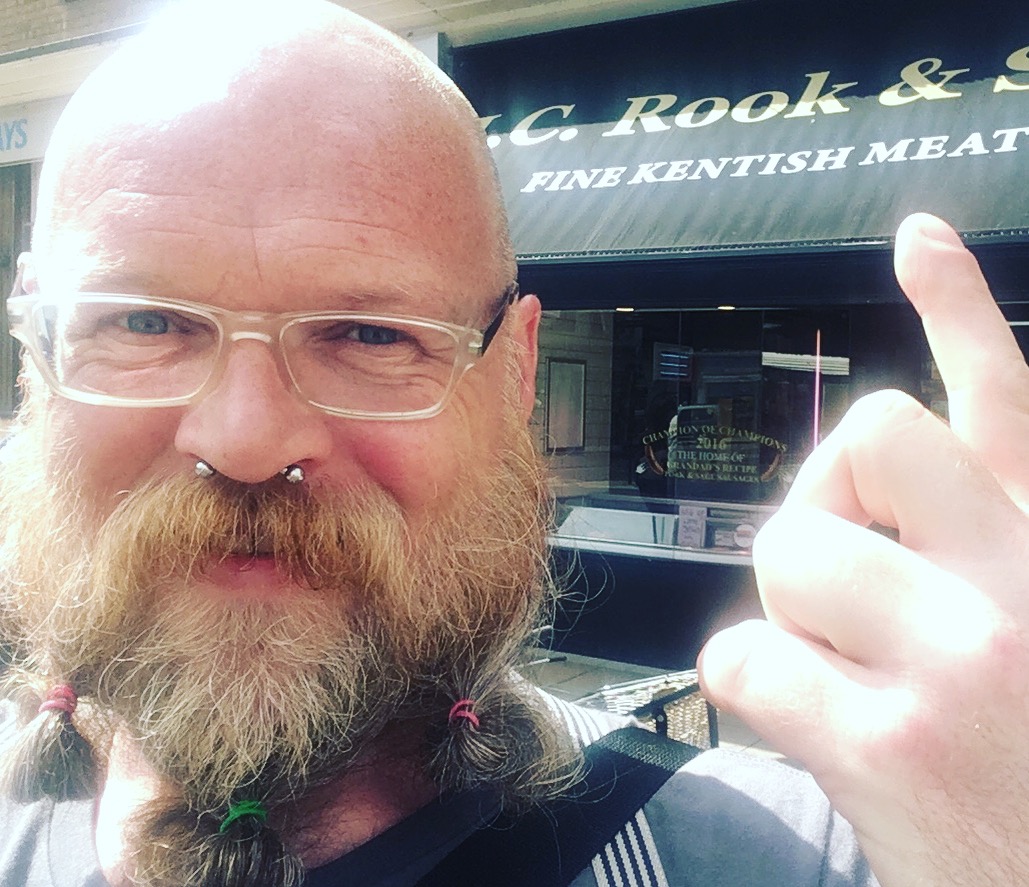 Lots of empty shops in town sadly, just now. It’s a huge town centre though for a population of only 28,000. So empty shops are hardly surprising in the current costal towns austerity and with the high rents charged by greedy landlords. A huge modern cinema and shopping complex has now been built between the port and the town centre which will further choke the footfall to the town centre. Town planners! So I was surprised to see this huge sign and its grand declaration of the wonderful generic chain stores you will delight in when you step inside our empty units. Speaking with locals I’m told that many chain stores from the High Street are planning to move to this new centre causing further closures on the High St. Residents are especially annoyed with M&S who will only sell food when they move. Many say they never wanted this new shopping centre but it was forced on them. 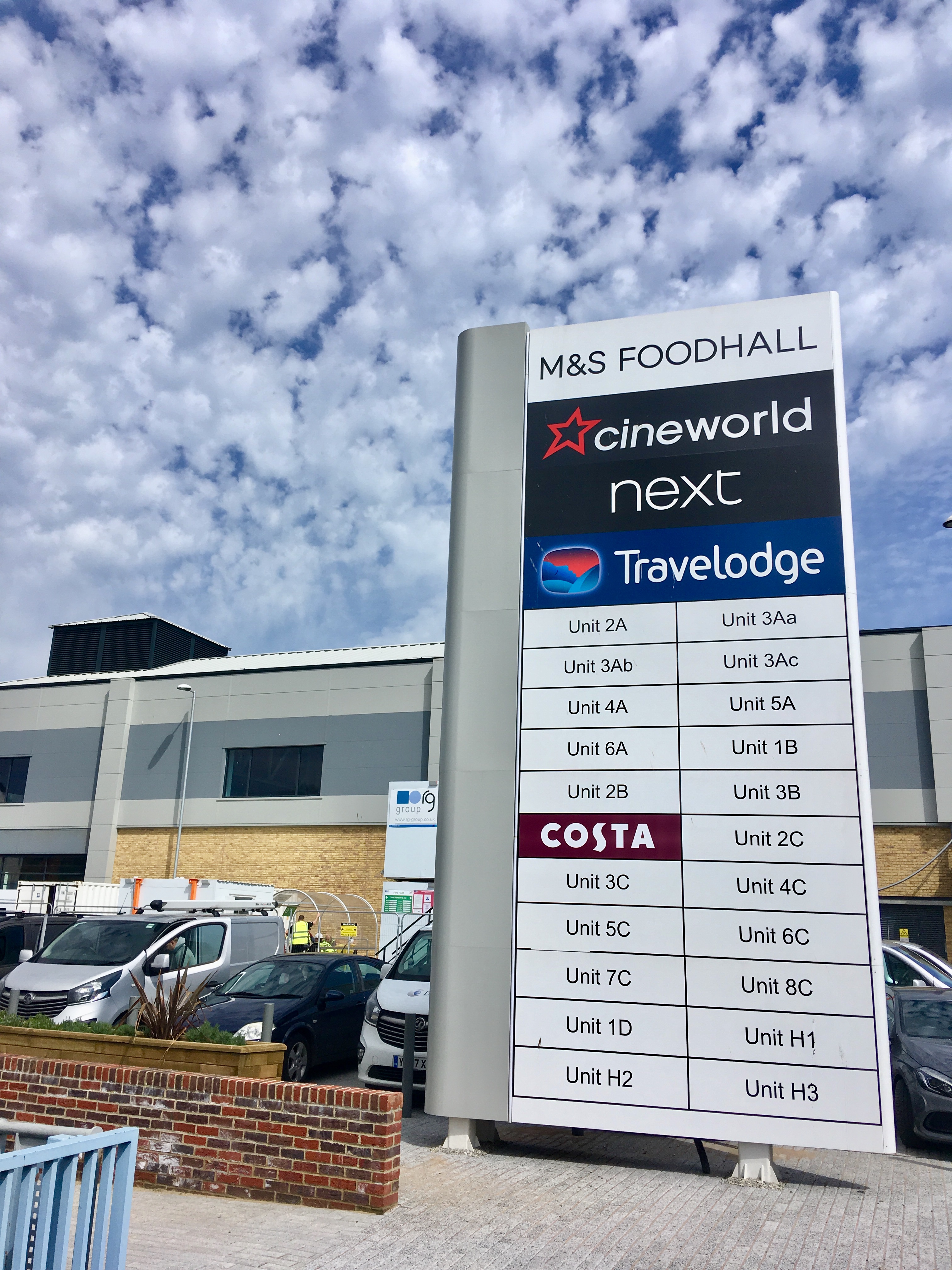 To the castle Russpunzel and let down your beard. Dover Castle sits high above the town on the eastern hill with the famous white cliffs behind. The front door to this  country in days before aviation. We were once defined by the brilliant white chalk when spied from Calais through the marvel of optics and telescopes. Ah early tech. Wonderful thought that really but with these wonderful views unfolding as I climb closer to the castle you can’t fail to feel the history hanging heavily in the air. It takes over it’s that rich. Dover has been witness to so much history and it’s thick, all over the landscape. You can’t miss it. I nearly choked on the history. I coughed up something rather nasty from the past a couple of times. 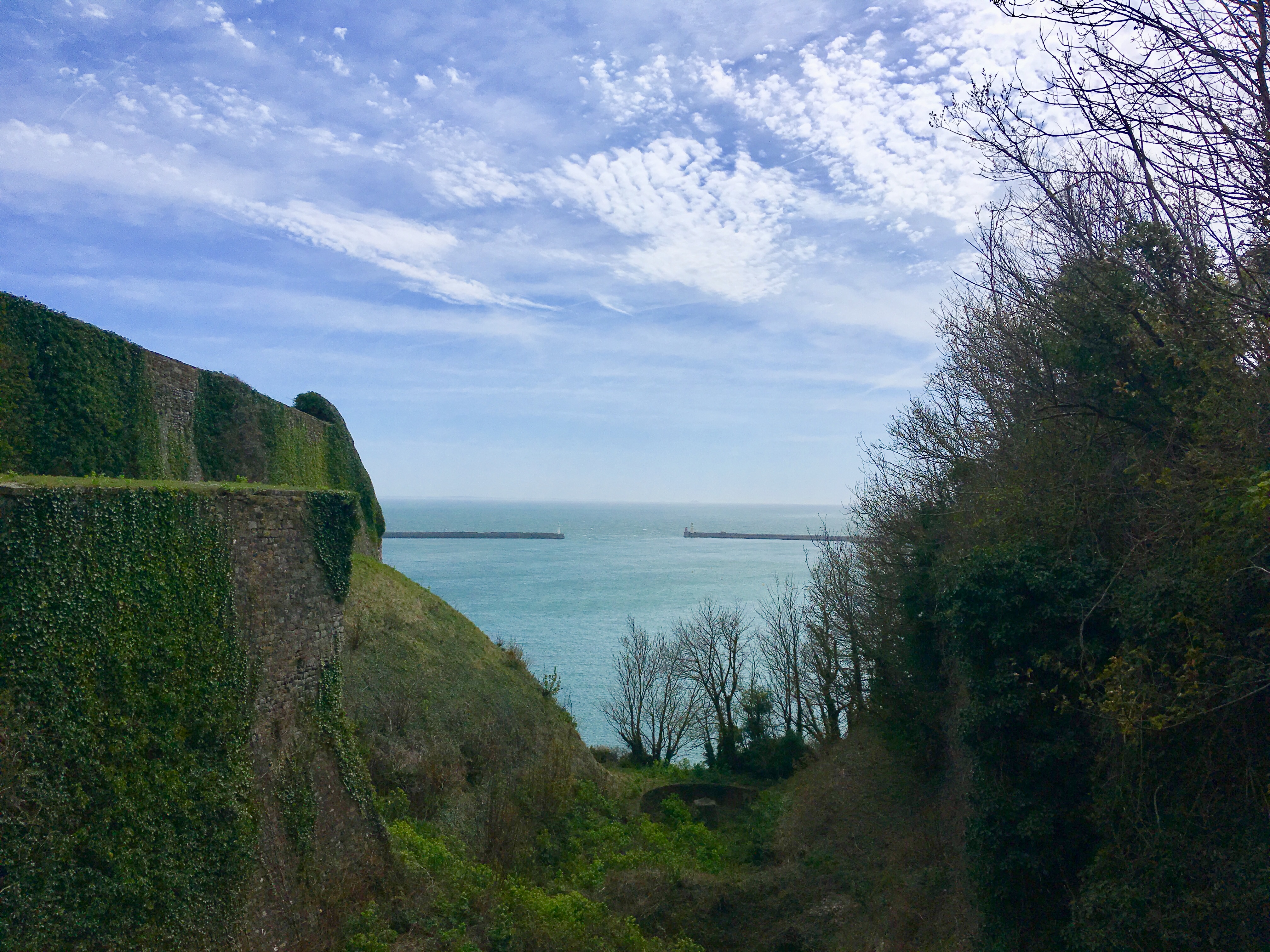 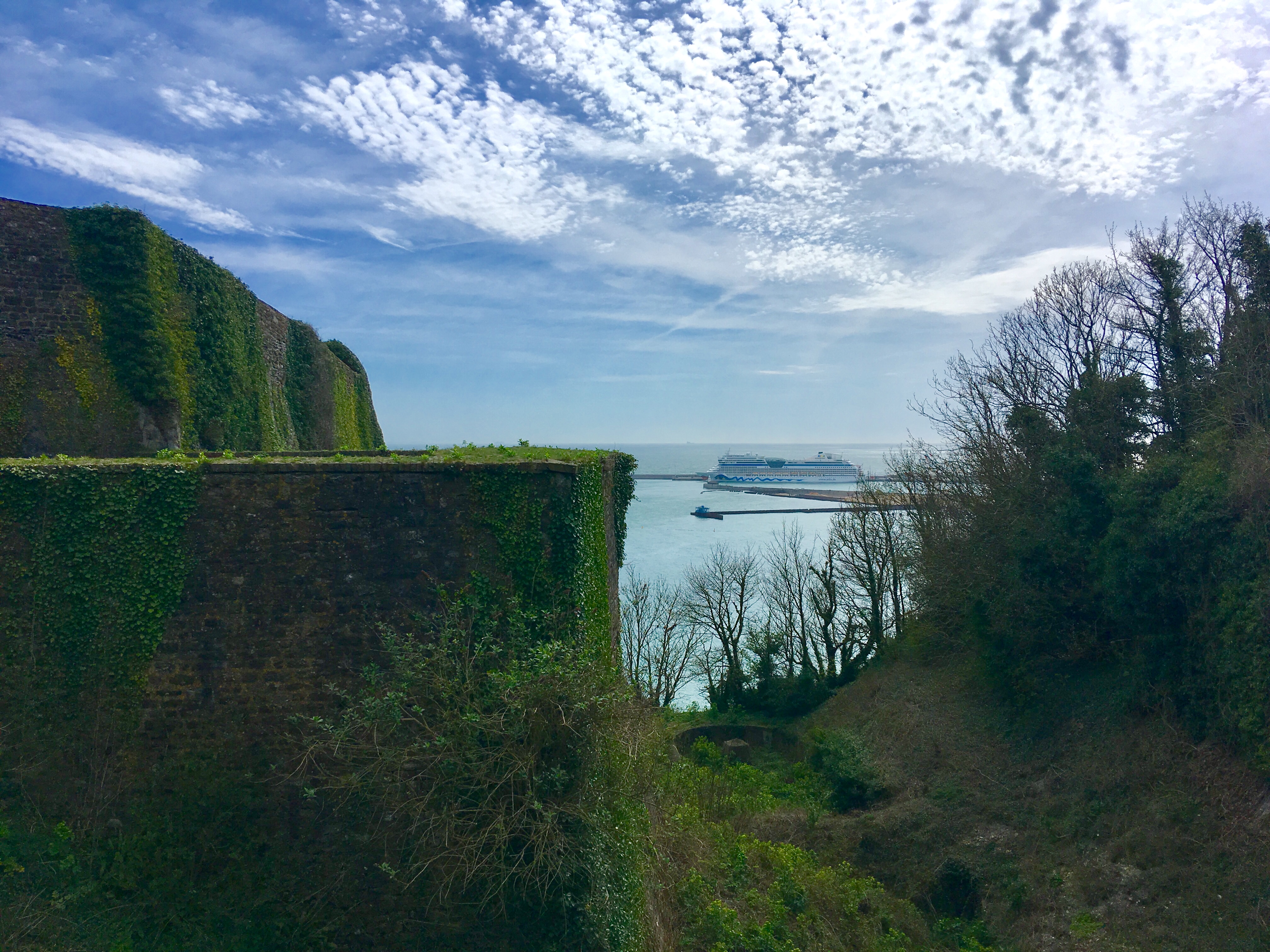 At last I reach the first and newest rampart and I’m immediately struck with a Brexit induced hallucination. A huge smoking gun pointing towards France. 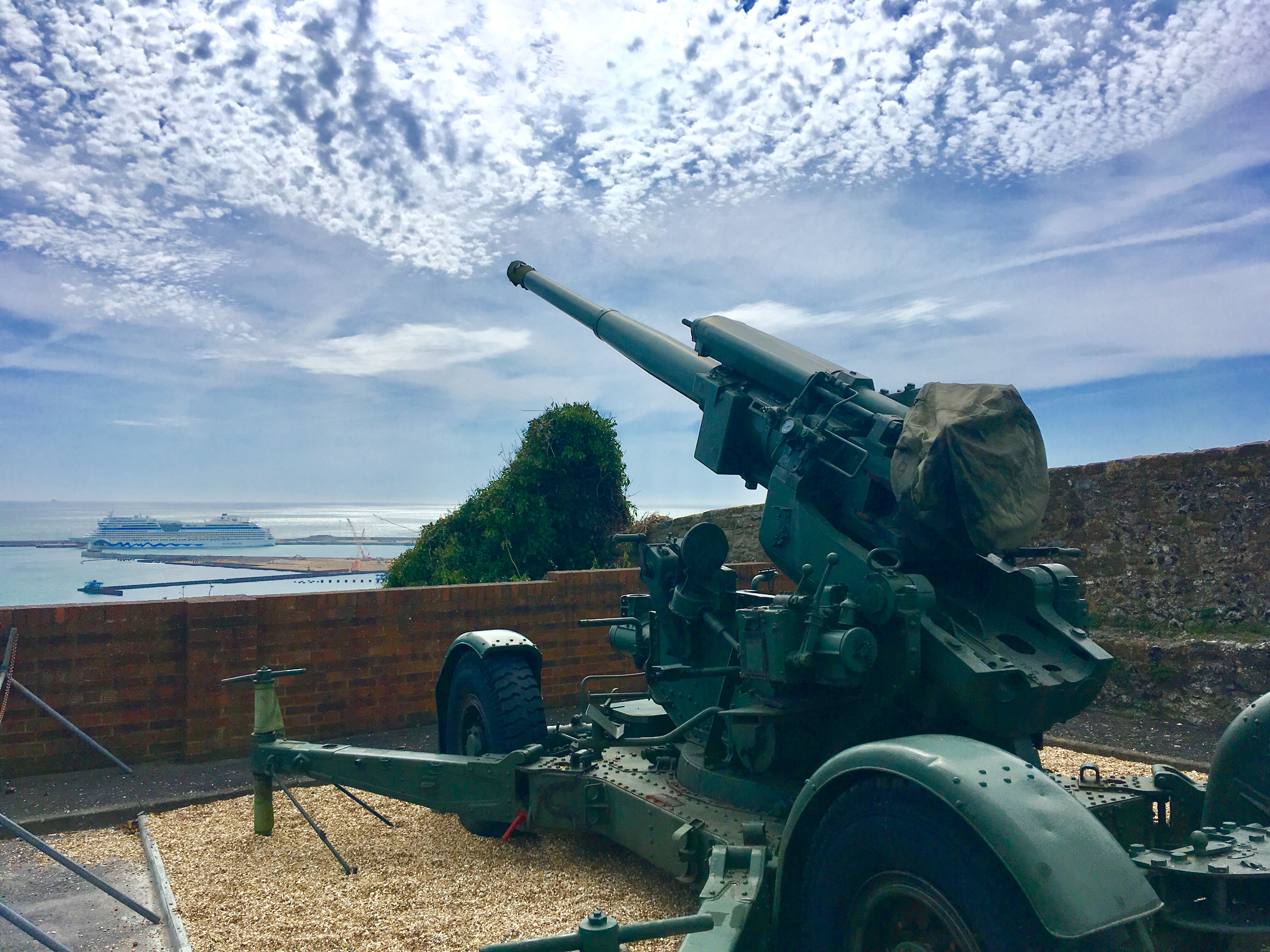 Inside the castle I discover Europeans alive and well and none the worse for political cannon balls being aimed at them daily. The castle is really busy and it’s great to see all the different groups and visitors and everyone smiling like they’re all in on a big secret. It’s fun. And they are quite chatty too. Or is that just me forcing people to talk? I talked to loads of people today but thinking about it, I instigated all the conversations. Some of the Spanish students here today have been somewhat politically minded too. This made me smile. 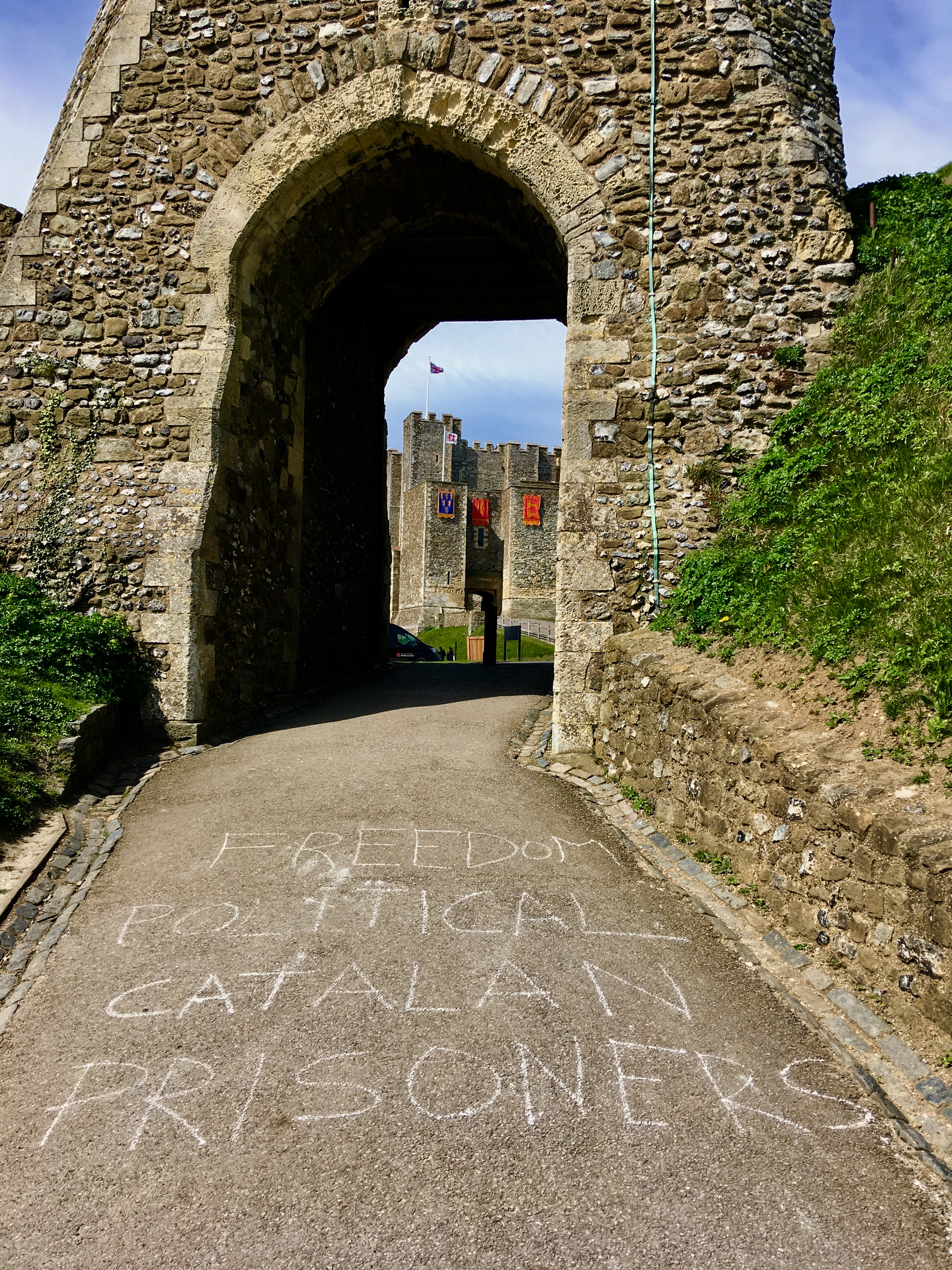 The message is just chalk and somehow quietly innocent. It’s funny too that it’s inside the castle. That most English of military castles that has never been breeched. A guide did say there was a rumour that Hitler ordered it to be spared the bombs as he wanted to symbolically take it. Or is that just a urban myth? This message reminded me of a group of fantastic Spanish students I once taught. I remember being told that some arguments within the group were about the Catalan and Basques issues and I thought how this innocent message might also upset other Spanish people. Anyway sweet message but bad English. Said the old fool that can’t speak Spanish. Shame! (ding) Shame! (ding) Shame! (ding) Shame! (ding).

My main purpose today was to begin gathering photos for my Roman Dover blog. So while I want to tell you about this Roman structure now. I will save it for my blog to come. However I will say it’s big for a surviving Roman thing in Britain. 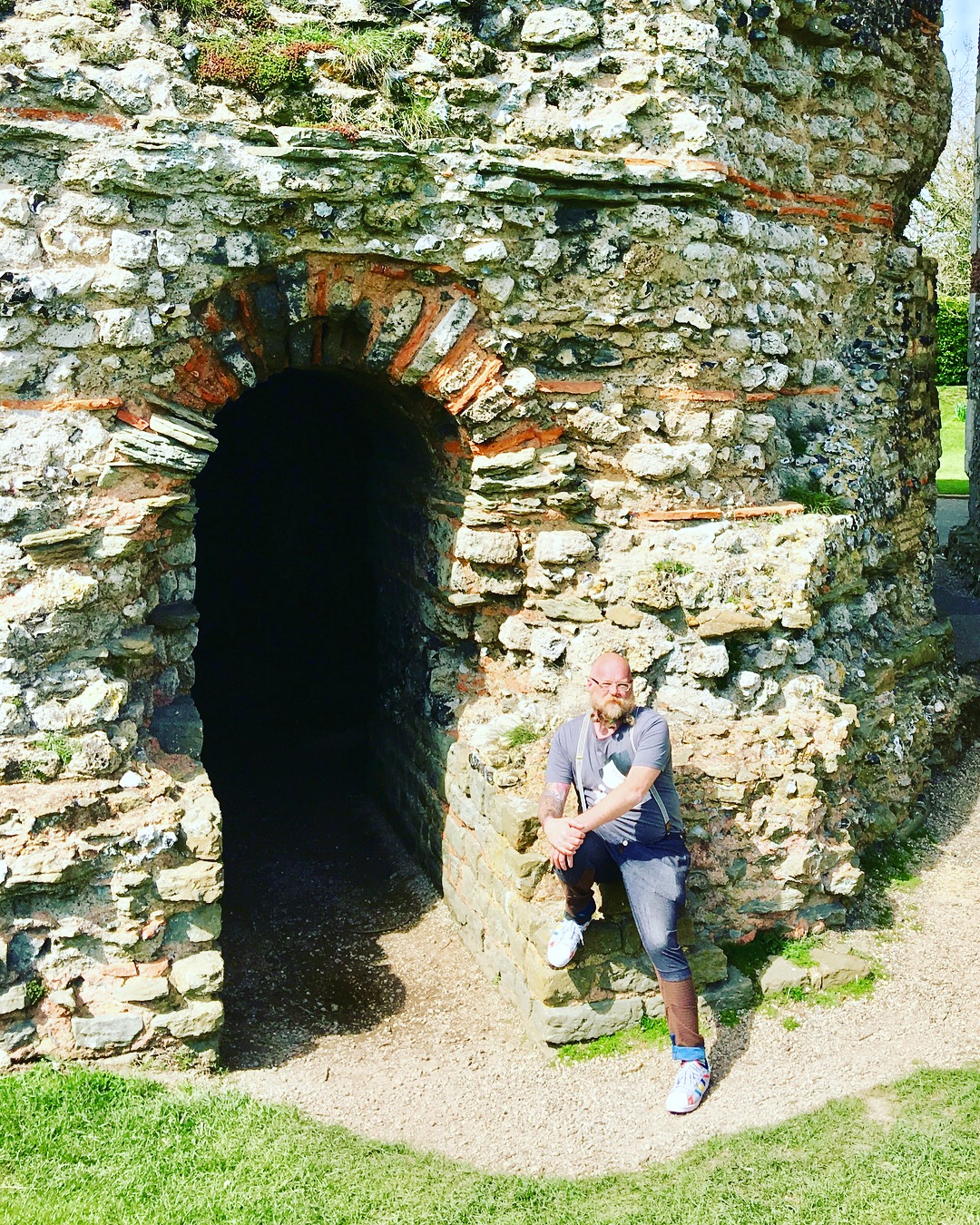 Beautiful views are everywhere and these empty barracks would make a great starting solution to Dover’s social housing needs. Come on Dover – think of the positive headlines you’d get converting this into the most desired social housing ever. It’s got a carpark too. Sort it! 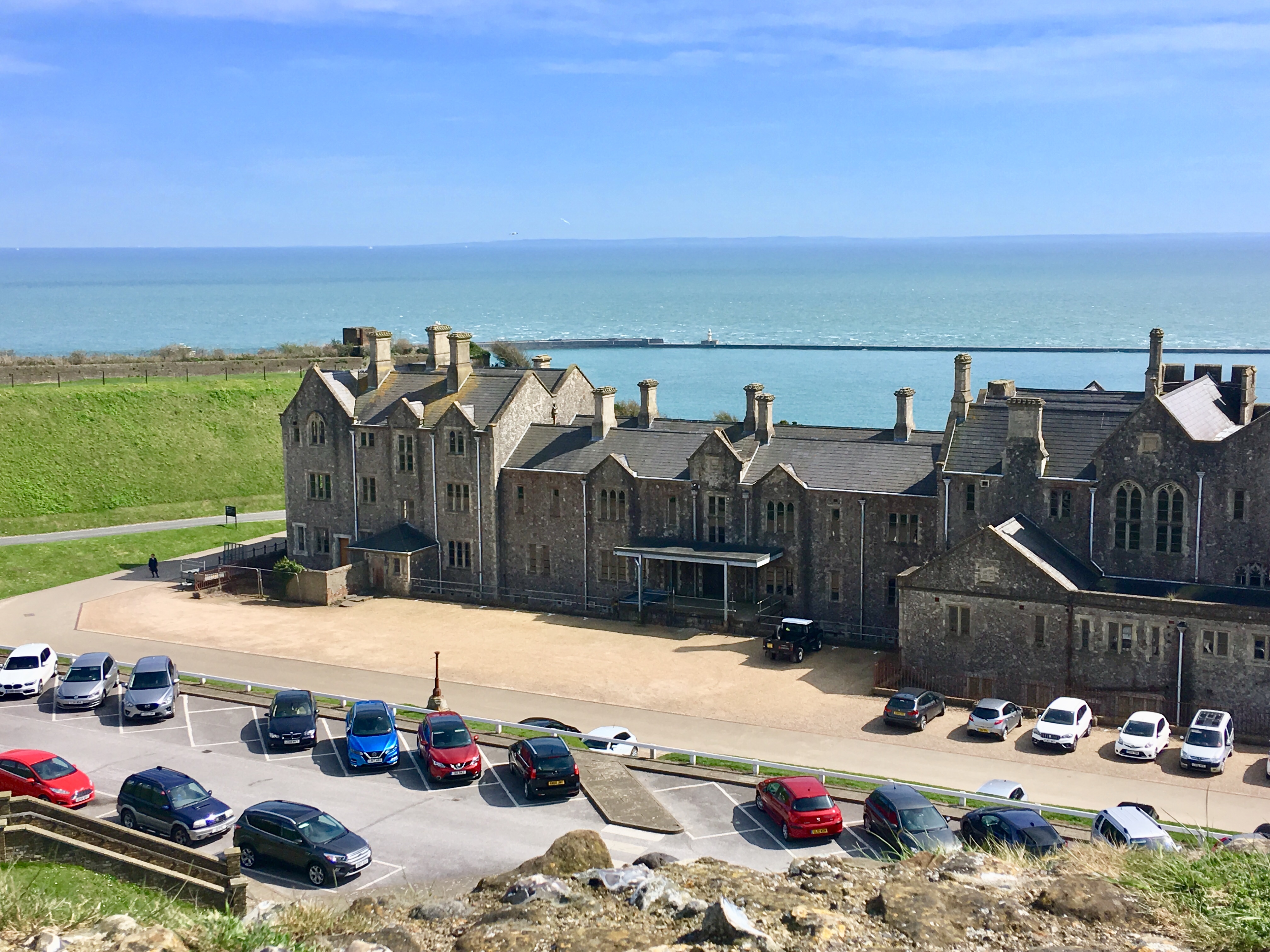 All over Dover Castle the views are vast and swing from the sea to the rich green cliff tops. Focused aspects are created by being framed in all the varied windows and openings for weapon fire that defensively face everywhere. Endless vistas. 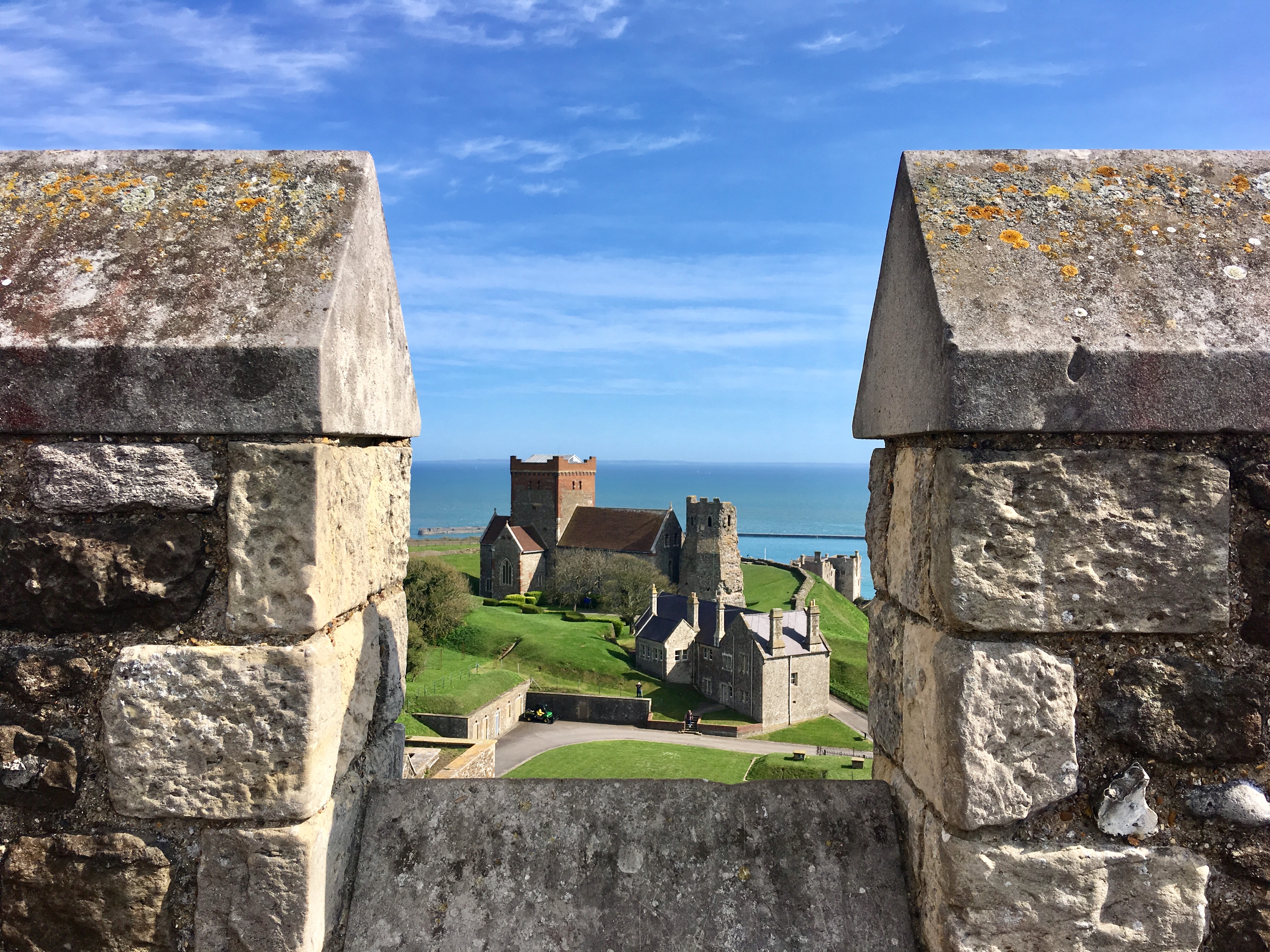 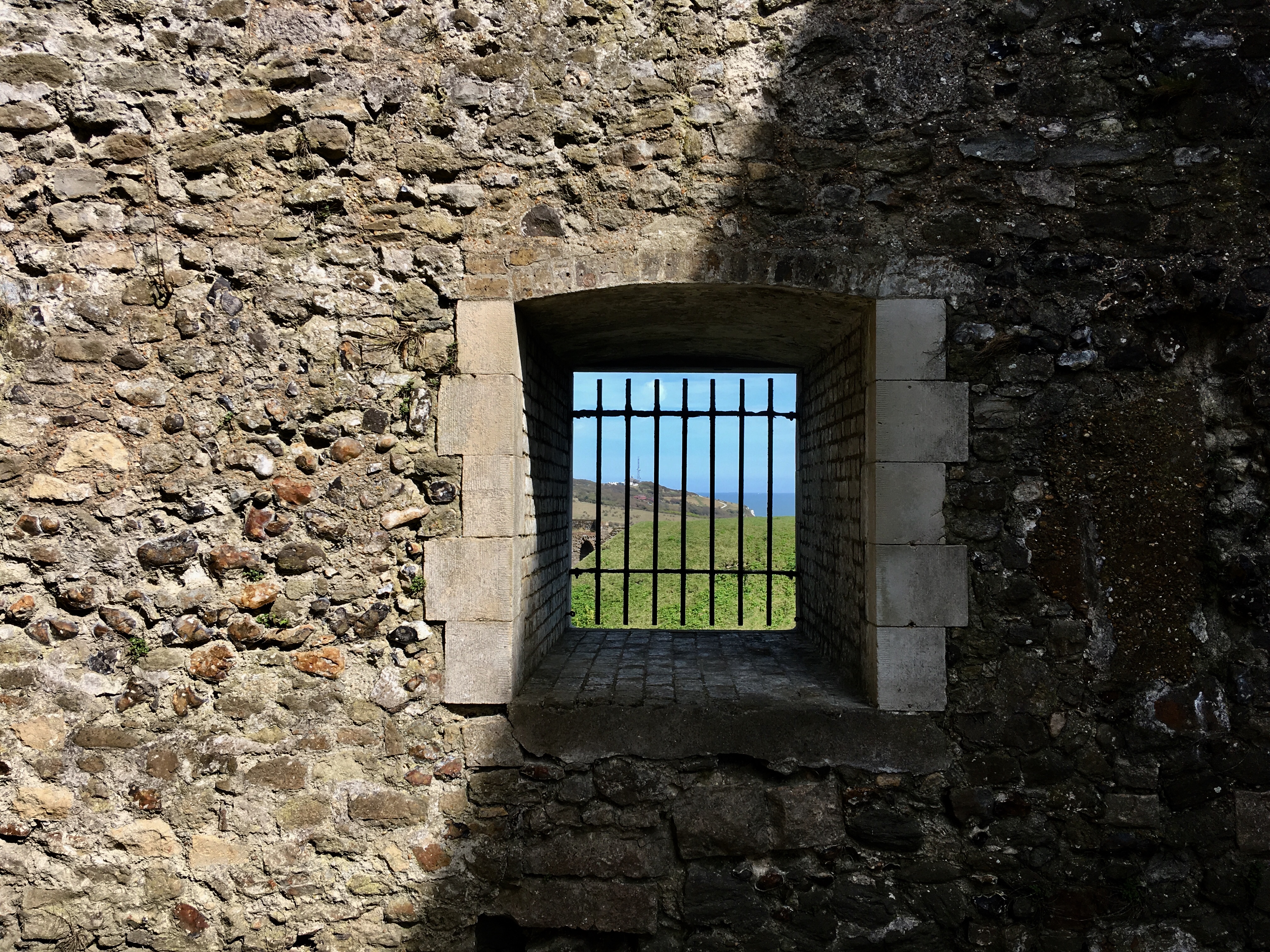 The air was now growing thick with military bravado and Russpunzel’s fairytale castle on the hill was slowly revealing itself as a vital defensive stronghold perched as close to France as it could be. All this warlike energy was beginning to have an effect on me. Whoosh and I had a Samson moment. It’s all about the strength in my beard. Suddenly I believed I could raise a draw bridge. 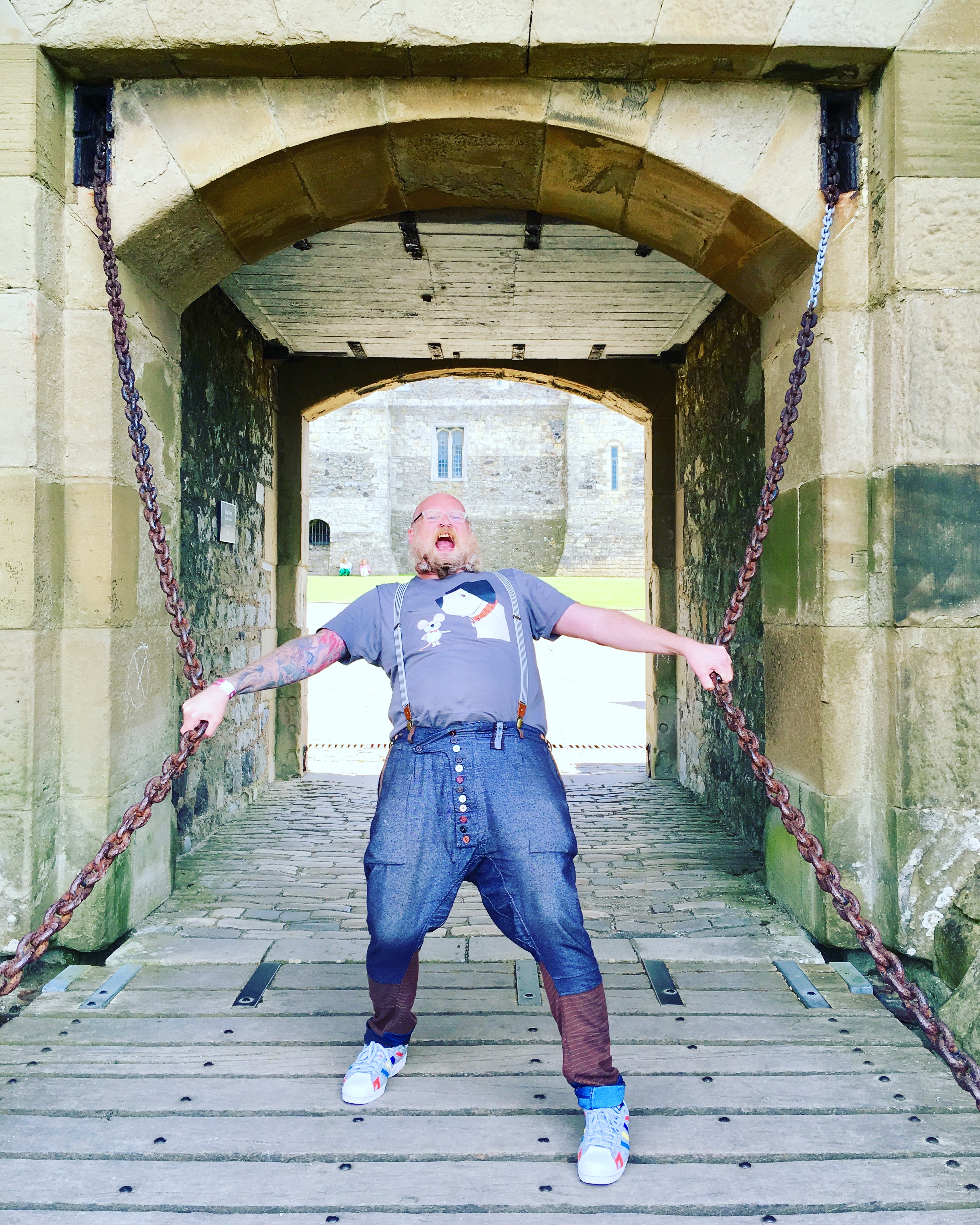 And so to the Great Tower. The innermost keep of the castle and I can see the hand of William the Conquerer and the Tower of London. So now I see why Dover also has a Tower Hamlets district. 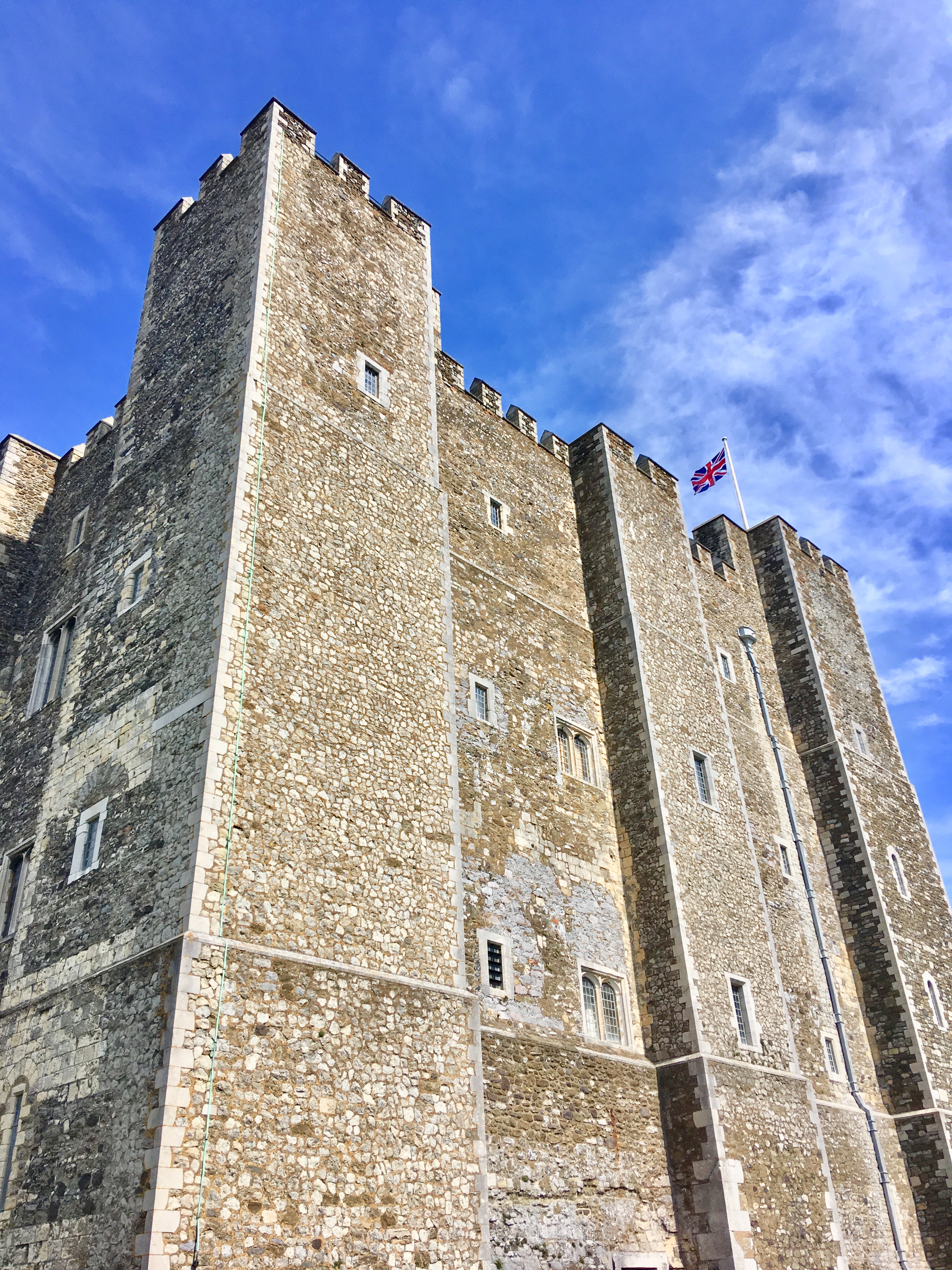 To the King’s chambers and to play out my Claim of Thrones as the rightful ruler here. Well how many castles does one monarch need? They’ve got Windsor and several others. I just want the one. Now I’m guessing this is the front door? Knock knock “I’m home. Someone fetch me a nice cuppa of tea. King Russ is back and wanting his throne!”. 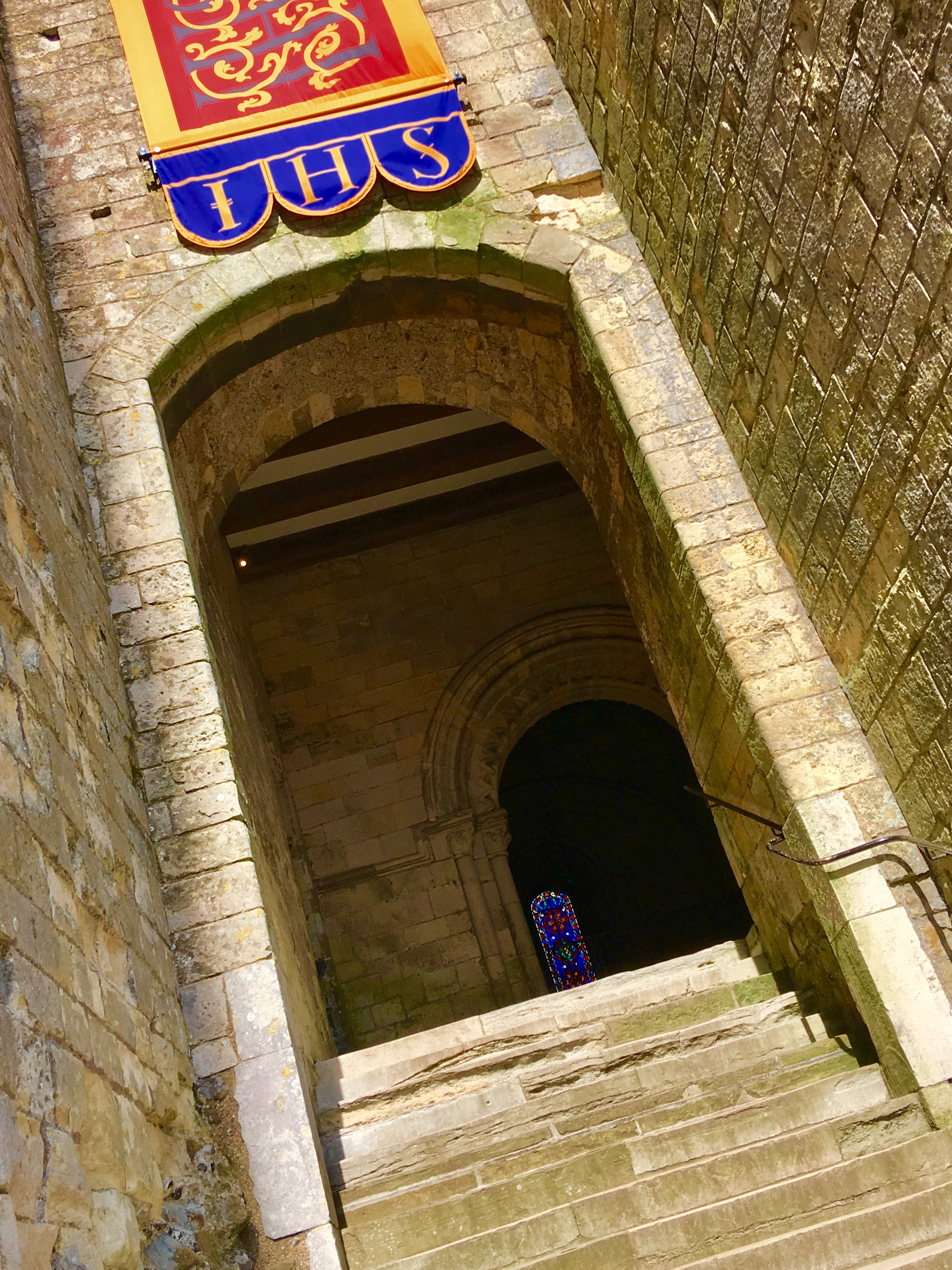 Oh it’s getting all posh in here being a Royal residence. And with this being a very sunny day too, stained glass enriched light was blooming inside every room. The deep stone work glowed with the different coloured hues from the ancient glass panels 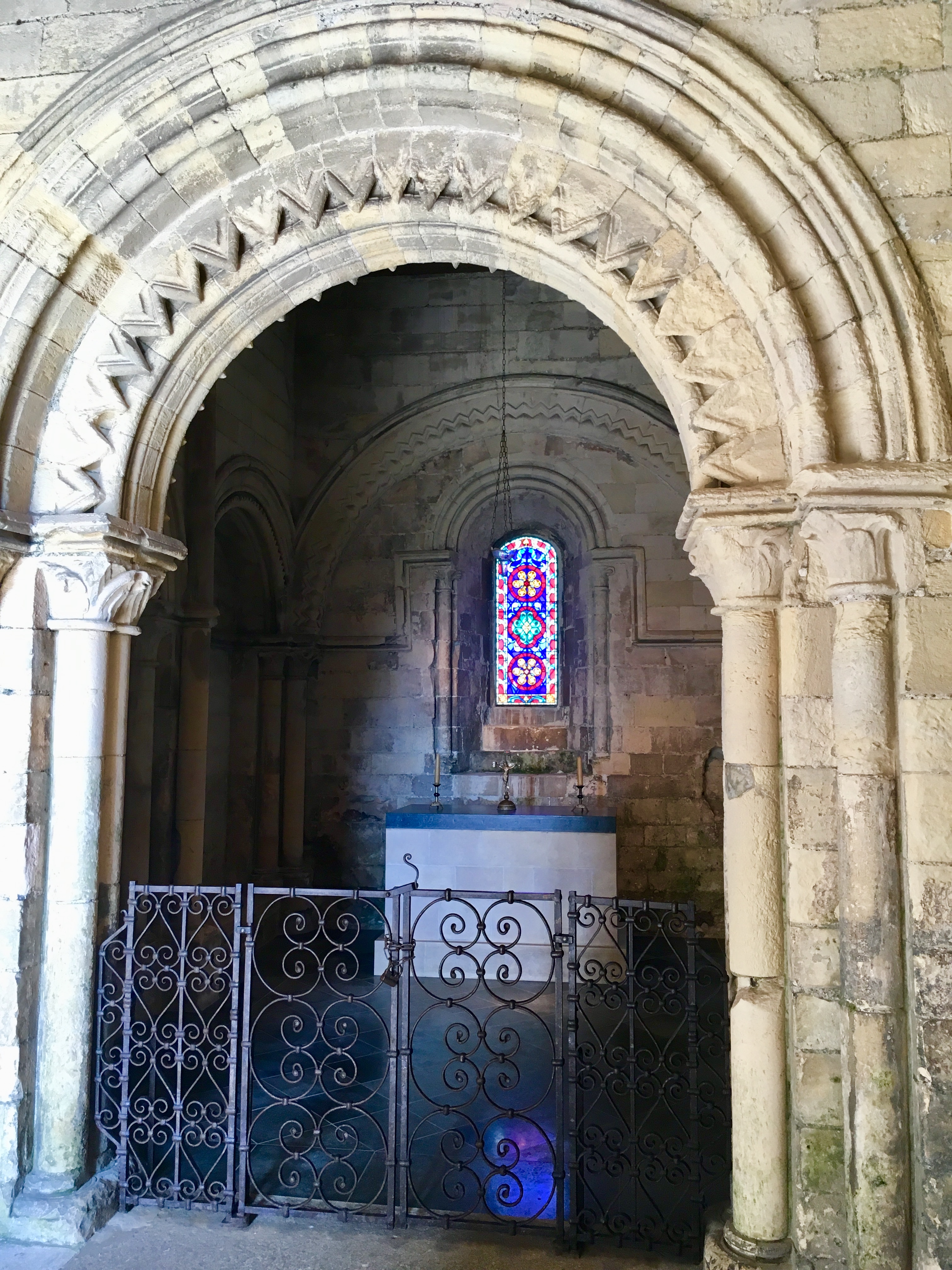 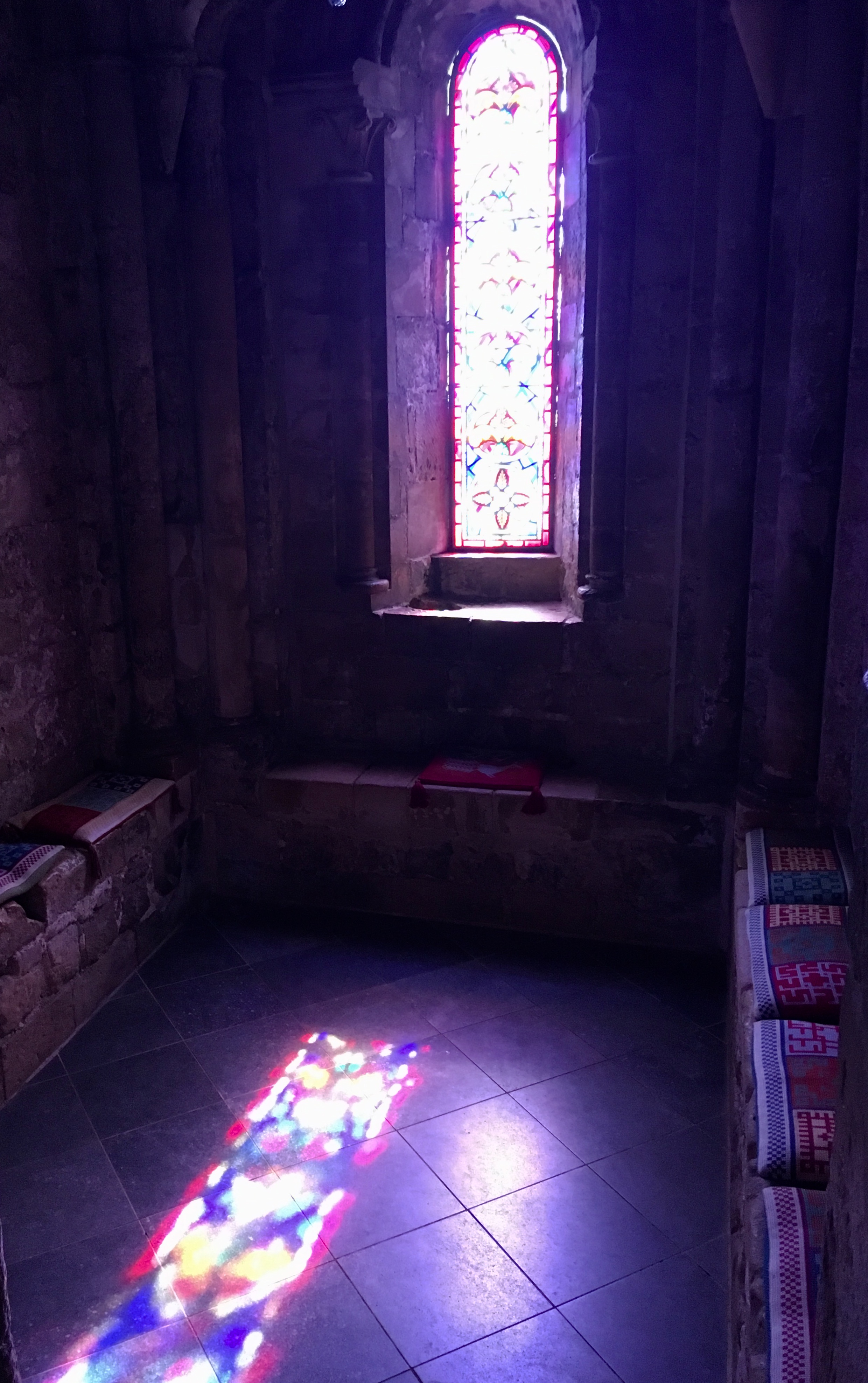 So the King’s bedroom, correction. My bedroom. Oh you’re joking? Not at all happy with the decor in here. It’s too medieval. Like something Henry II would have had. I’ll get someone in to give it a make over. Will someone ask the courtiers to leave now too I might just nap? It’s been a long climb to reach this inner Royal home of mine. I’m poofed. Puffed (yeah cheap). 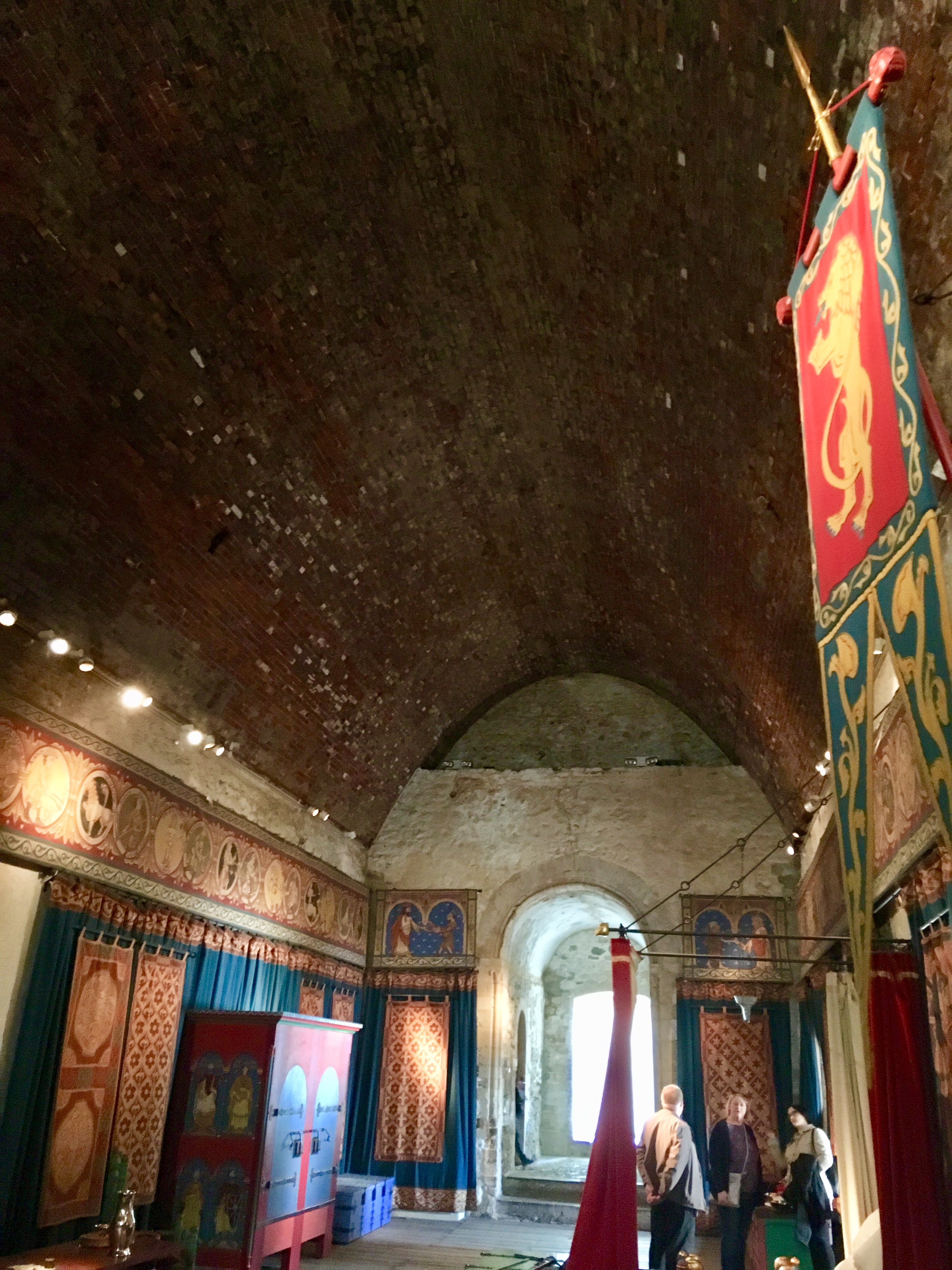 I’m mean, when was the last time you whitewashed the ceiling in here? This urban-chic brickwork is so over now. Oooo what’s through this door? Ah my Throne. God I look good sitting there. Haha.I feel mighty real. Even without the gold lamé. 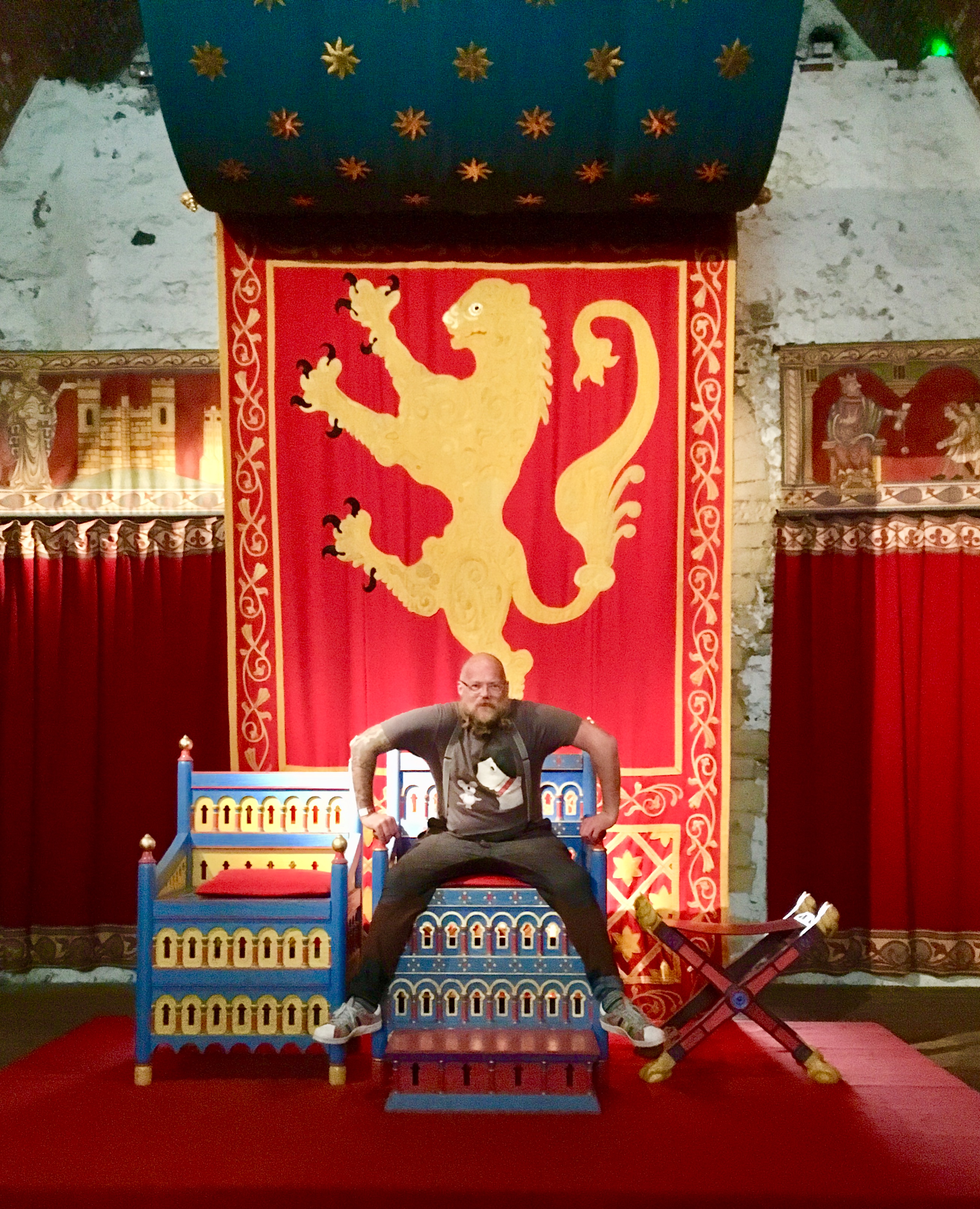 The Lion, Mungo and Midge. The three symbols of my state. So apparently I’m not the King of Kent and Dover. I am mistaken in that they keep telling me. So I’m  arrested for being and having a treasonous arse. To punish me they shacked me in a dungeon and left me there alone  for minutes. 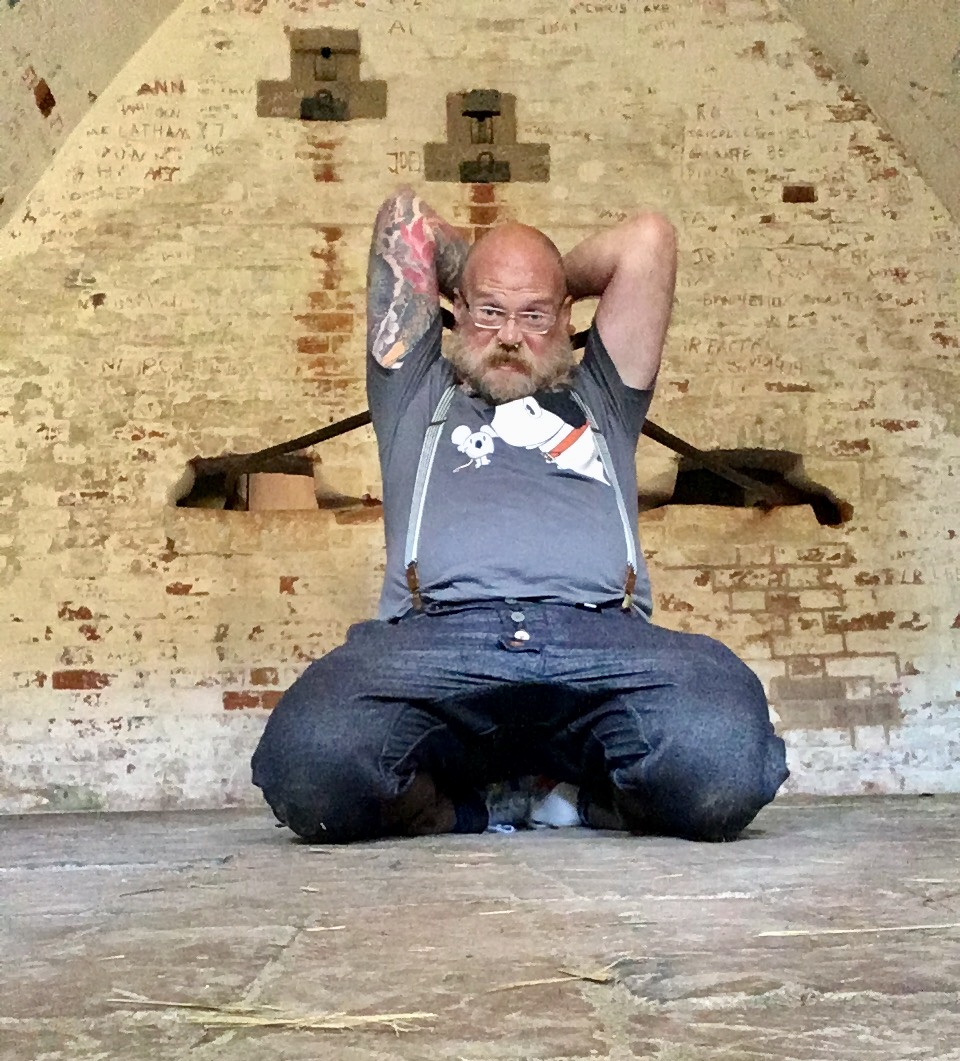 Then as penance to learn me the errors of me common ways and for getting above me station. I was forced to become the lowest skivvy in the castle kitchens stirring a cauldron of lies and propaganda. 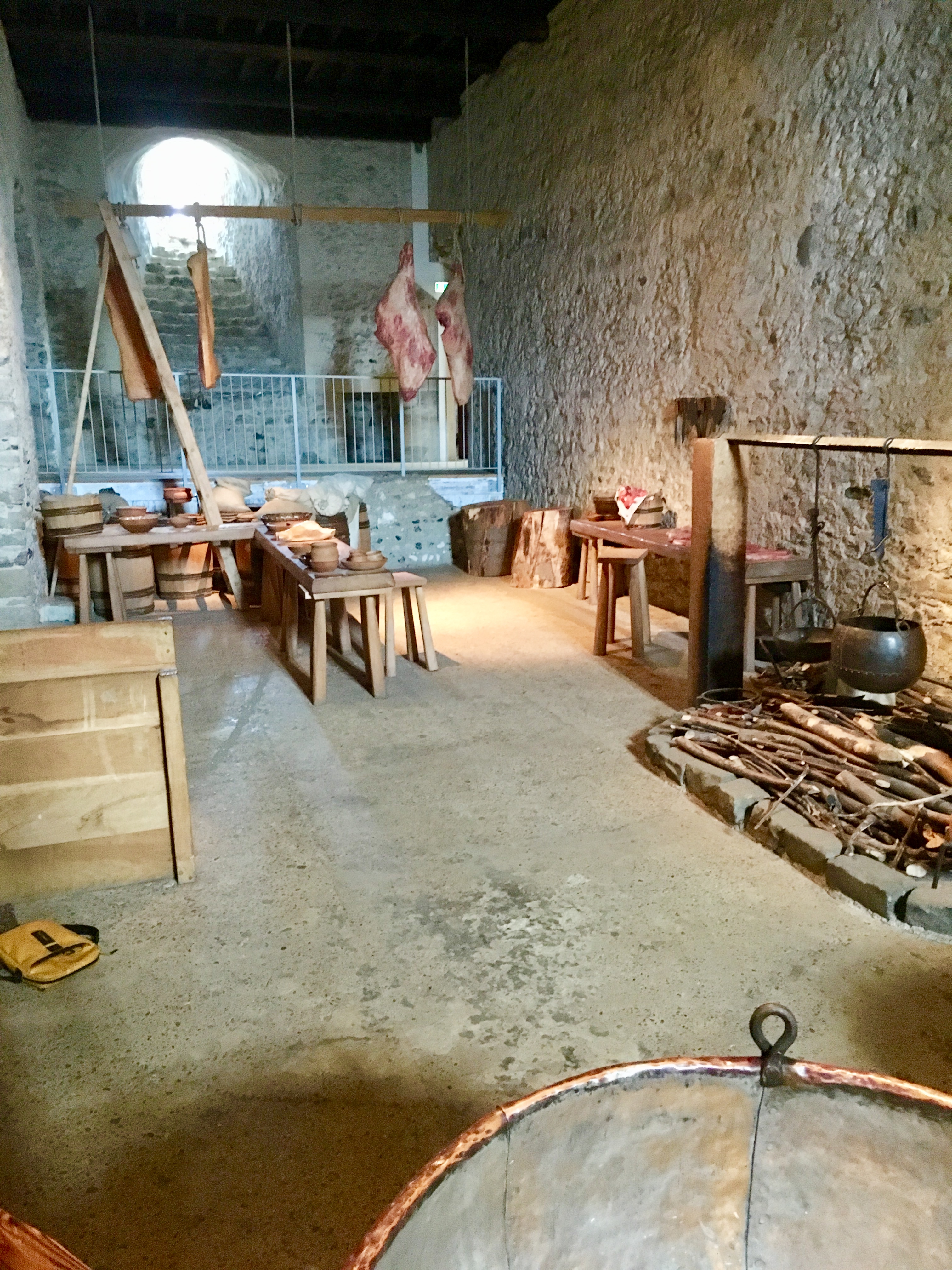 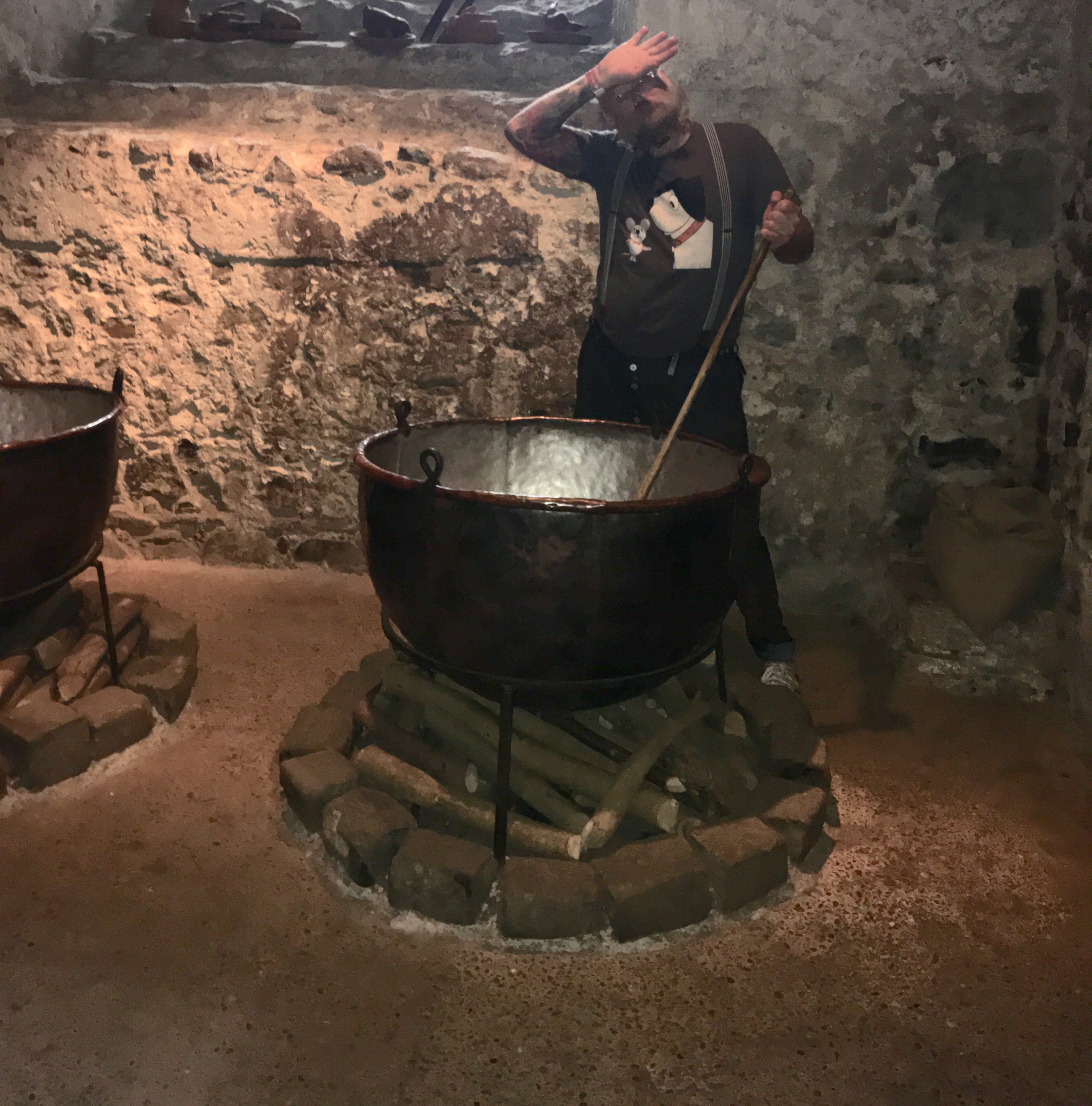 Eventually I escaped the castle and ran through the hills and valleys, parks and cemeteries to freedom. Back safely in my temporary residence the late sun poured in through coloured glass, reflected off a wall mirror and lit me like Cecil B de Milne. I was finally ready for my close up. 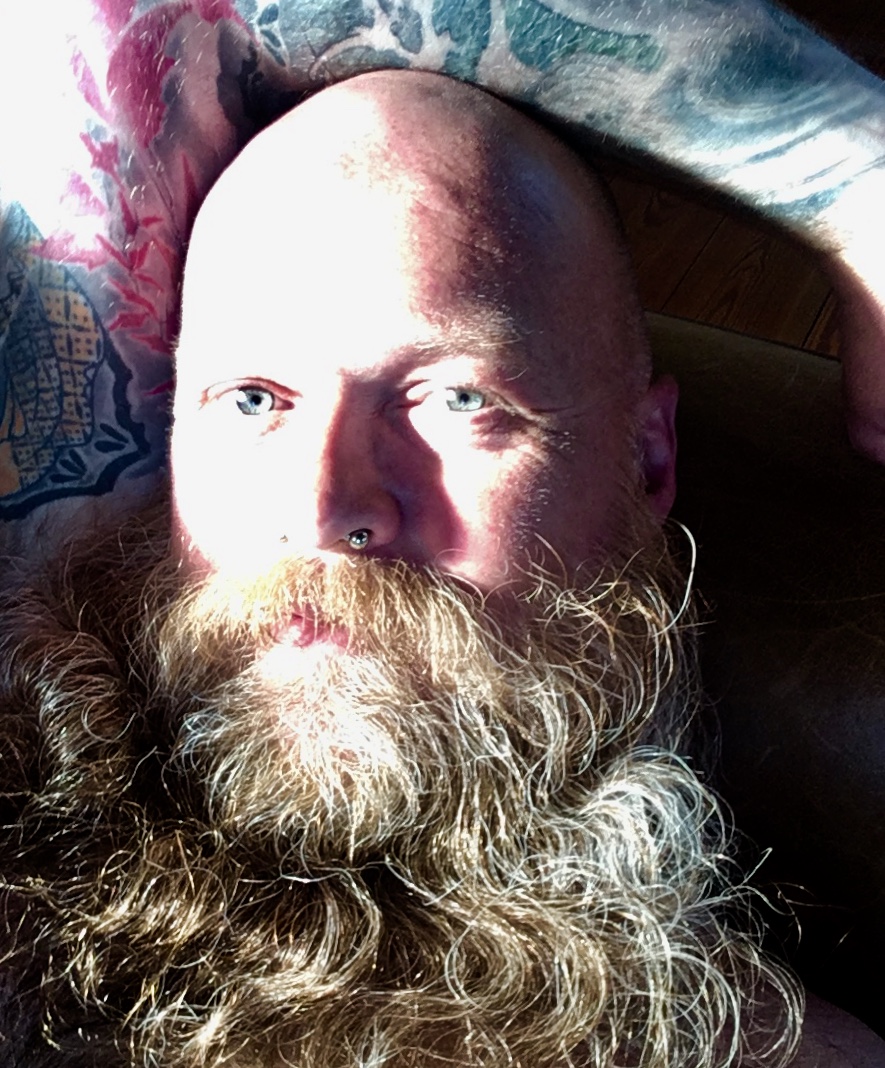 Sorry, there really ought to have been some historic facts in there about the castle. But somehow they seem to have vanished. Whoops. Oh and just as I finished writing then, all the distant drumming practise finished and a giant ship thrice blew its deep and sonorous horn. It was so gorgeous. Ah Dover you old sea dog.