It’s been over thirty years since I fell in love with Florence after watching ‘A Room with a View‘ over and over again. It seemed at the time a perfect film and indeed led to my reading all the books by EM Forster. I also became a distant stalker of Helena Bonham-Carter. I didn’t try and follow her around, just watched all her films. Though I did go to Greenwich Theatre to watch her in Wilkie Collins’ Woman in White a book I also adore. Then I grew up, came out the closest and got over Helena but never stopped loving that film and Florence. Yet I’d never been there. With much of the brilliant  script by Ruth Prawer Jhabvala seared into my head I spent many many hours chosing the most ideal place to stay. I wanted to be Lucy Honeychurch and be transfigured. And why shouldn’t I be? It happened to the Goths! I also subscribe to the notion that on one’s first visit to Florence one must have a room with a view. I wasn’t transfigured and I laughed at my lack of a view. I had a plastic wrapped National Library. 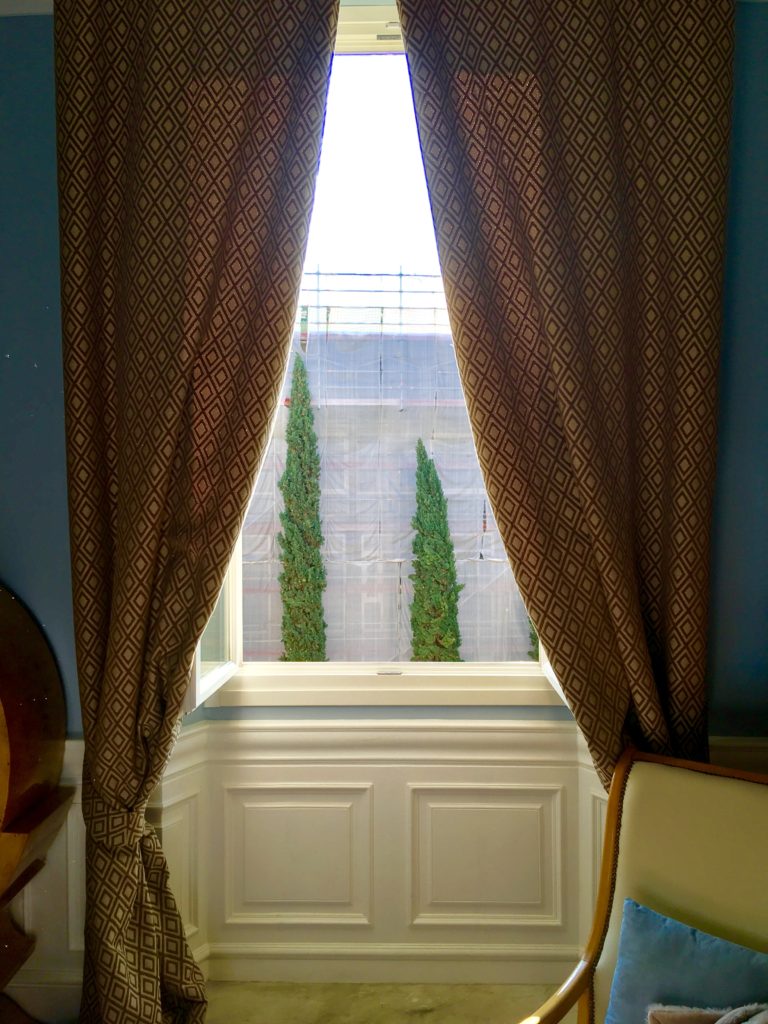 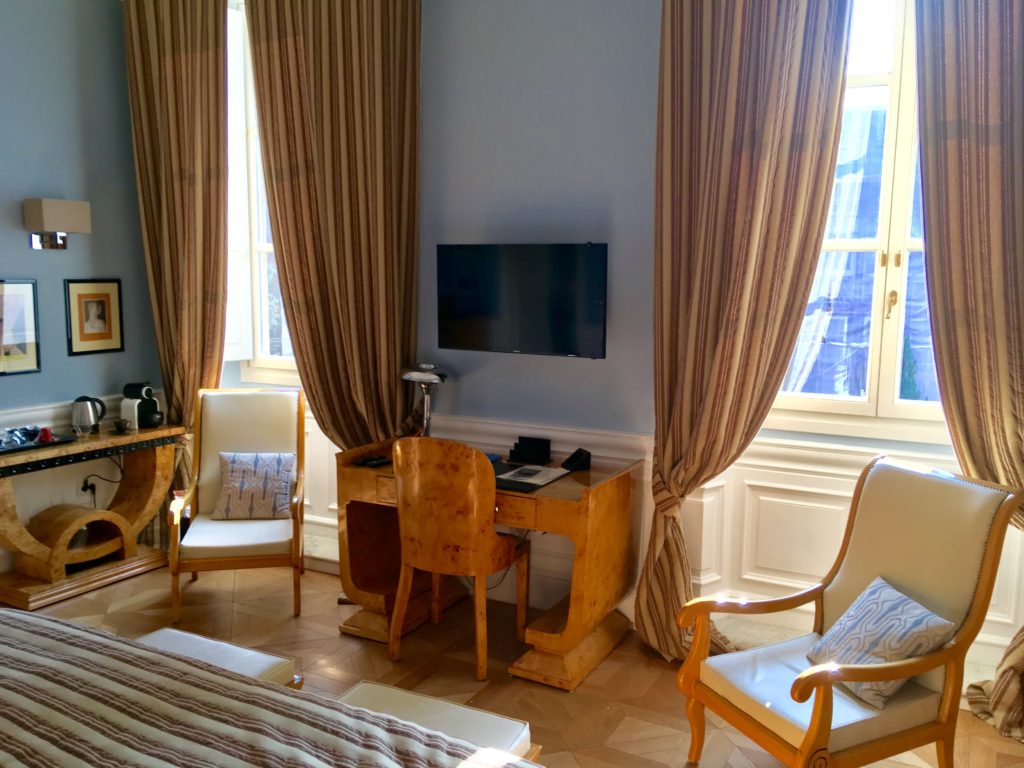 Not the fault of the hotel which was art deco heaven and just opposite the Basilica di Santa Croce and the but because Florence is such an old city that many buildings are covered in plastic to be restored. The main entrance to the library just around the corner was resplendent. 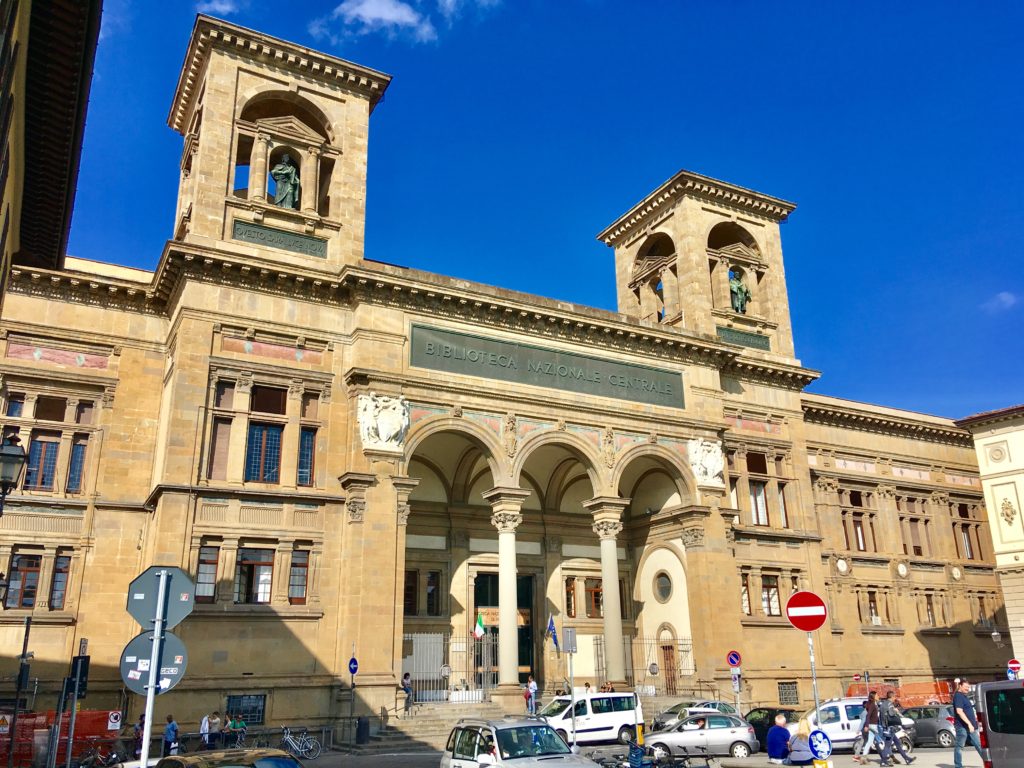 Fortunately I was able to see the funny side of my wish to live like Lucy but I also realised that trying to experience feinting in a piazza wouldn’t lead to me being caught by a handsome lover and swept to safety. But I’m telling this story the wrong way round entirely. It began as a totally over emotional experience. Before leaving Venice I downloaded the sound track to the film and with my headphones of and Kiri te Kanawa languidly pleading in my ears I set off to walk to the hotel. Those narrow tall winding streets were cool shaded relief from the hot sunshine and I was feeling overjoyed when sudden the Duomo loomed into view and I became extremely weepy. It is the most enormous and crazy cathedral I have ever seen and with Puccini swelling up in my head I was overcome by everything around me. 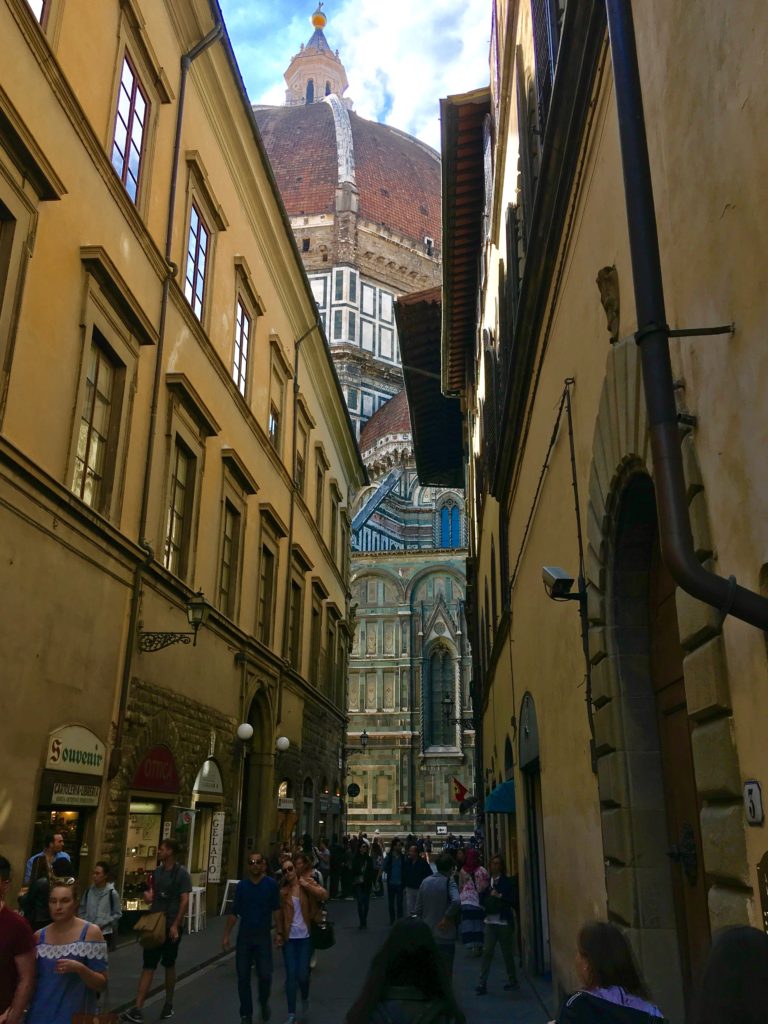 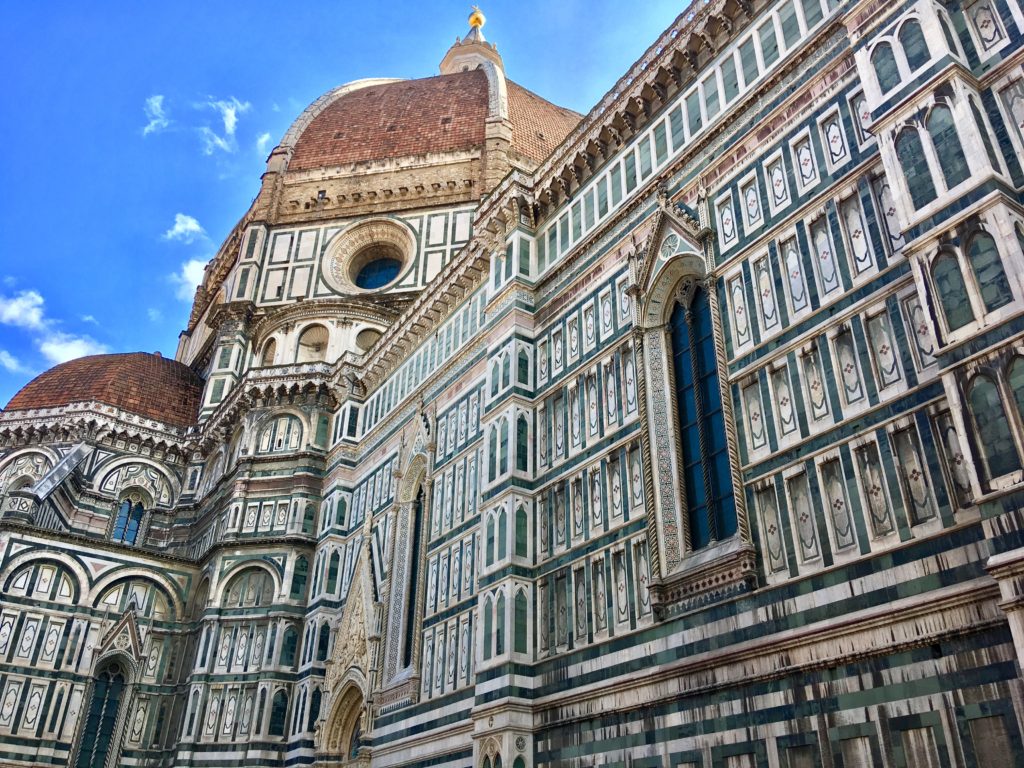 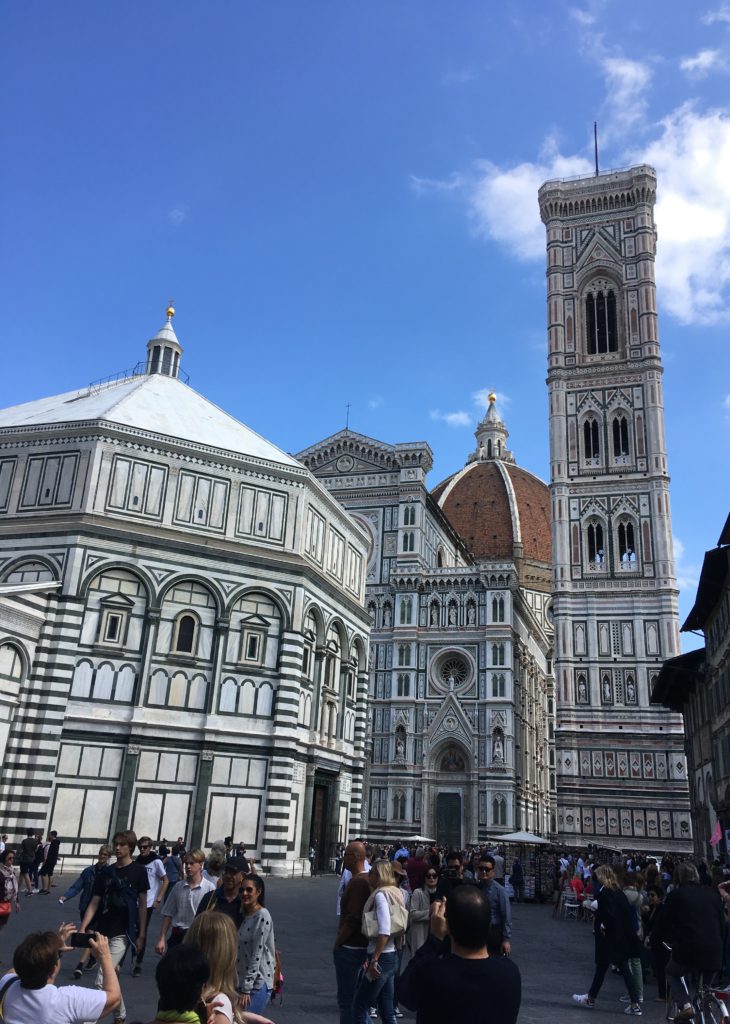 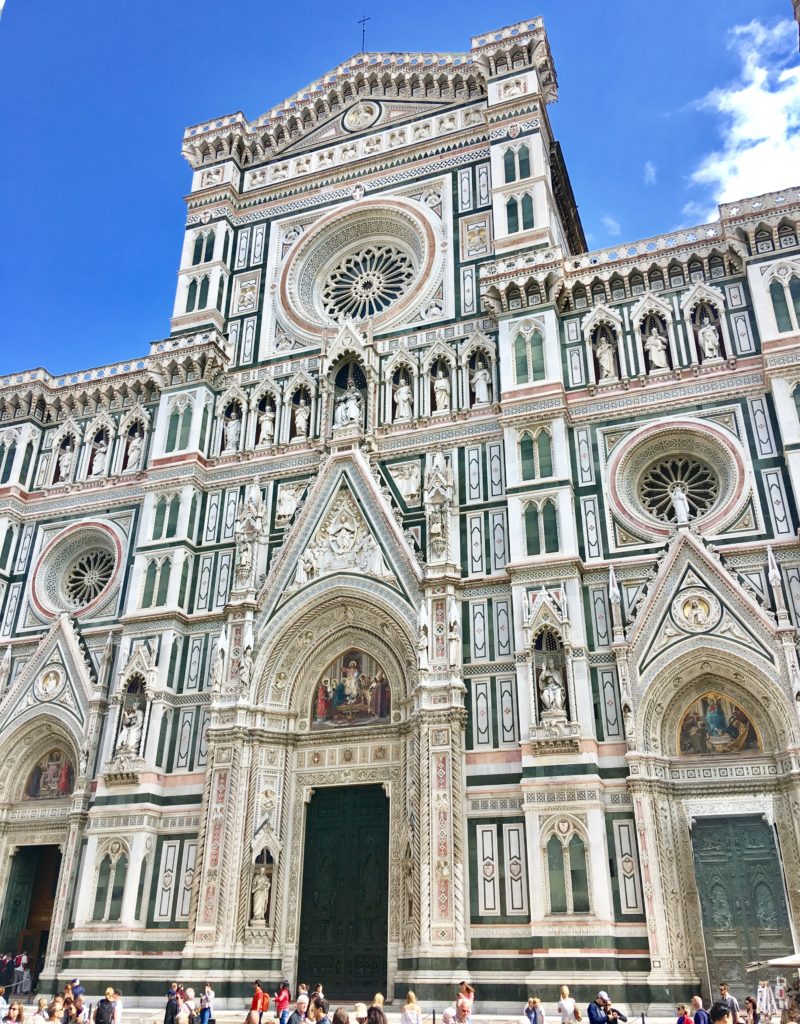 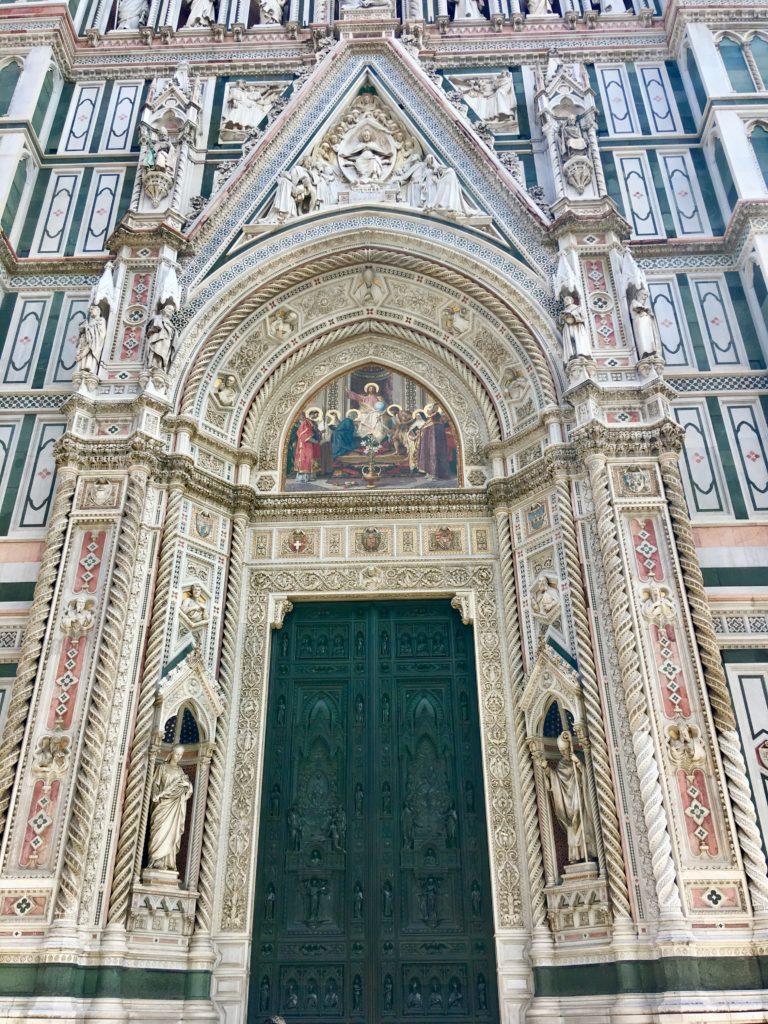 I’d never seen anywhere like this. Also the most famous images of Florence are views of the roof tops with the red tiled dome crowning the the view. Who knew the body of the building was so detailed. And pink, white and green marble! Well anyone who has been here I guess haha. But I’m a Florentine virgin as I mentioned so I was overwhelmed. Santa Croce where Lucy visits alone and without her Baedeker is only ornate on its façade. The Duomo is totally decorative on all sides. Plus theres the Baptistry and the Giotto Campanile (tower). It’s almost too much to take in. You can see why the real name of the building is Cattedrale di Santa Maria del Fiori (St. Maria of the Flowers). 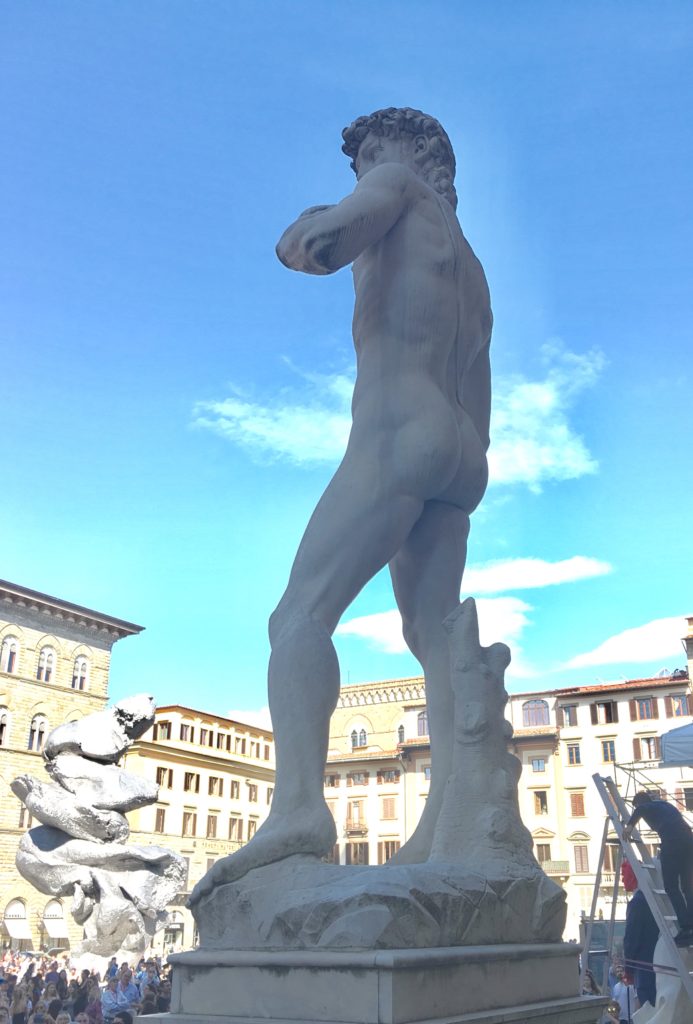 And so to Piazza della Signoria to see the famous fountain of Neptune but thanks to four teenager vandals is was damaged and is under plastic with only his head peeping out. Throughout my travels it would seem that my love of fountains is thwarted. If they’re not covered over for winter or for repairs they are empty of water. I love a fountain and yet I don’t ever seem to get to witness any in their liquid glory. If I get to Rome and the Trevi Fountain is off I’ll post a video of me wailing in despair. 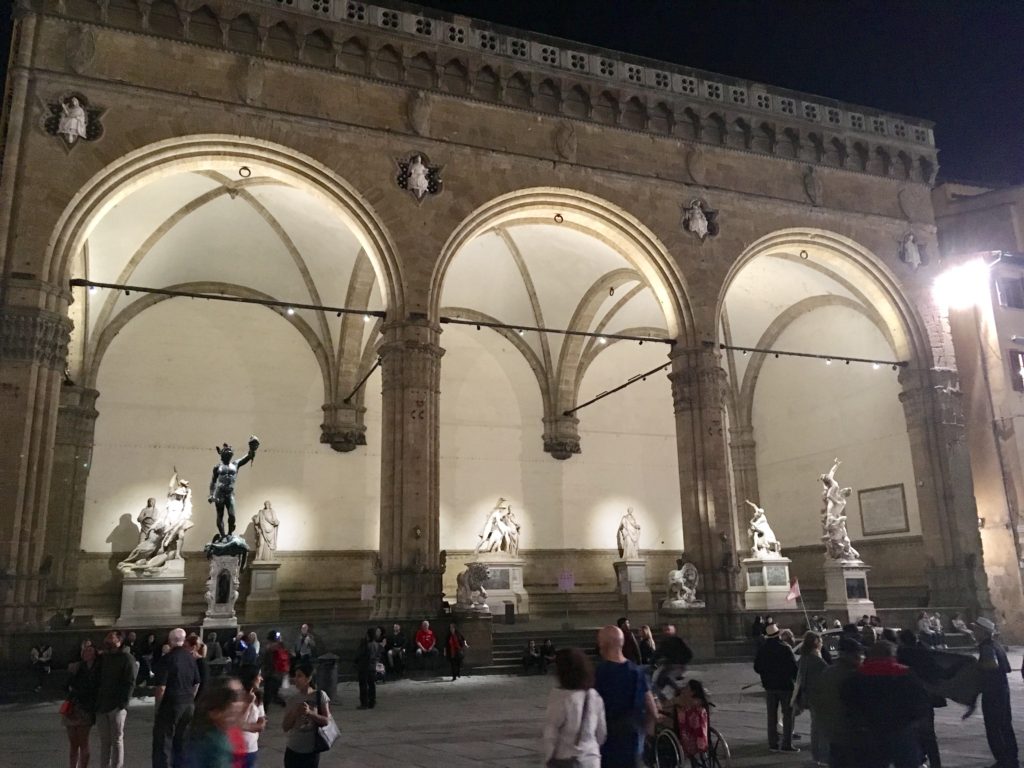 Luckily the Loggia dei Lanzi was open and here I felt I got under the skin of the Florentine psyche. The statues are all extremely beautiful images of absolute cruel violence.

This never stuck me as so real in the book or the film during the scene where Lucy witnesses the fight and murder in the square. Being here and seeing the size and the power of the sculptures is much clearer. And this is male violence on women and men.

Taut sinews rip and tear across the angry bodies of the cold marble sculptures. Now I’m not condoning violence in any way but there is a distinct homoeroticism in many of the works. Even the Rape of the Sabine Women the men seem sexualised towards each other too.

Dirty naughty Florentines. In fact David (though famously a copy) is the most mild mannered statue in the piazza.

The Herculean power symbolised by the clubbing to death of Cacus and Nessus soon became the identity of the return of the Medici family to power in !512 and 1530 and goes a long way to explain the violence depicted in the Piazza. The original ‘Bonfire of the Vanities’ took place just infront of the Fountain of Neptune in 1497. But the cruelest little snippet I discovered was that Flanders born Giambologna was never allowed to leave Florence. This great artist was held captive by the Medici family though he created such beauty for them it came at the price of his freedom.

Like the forth plinth in Trafalgar Square, London the centre of the piazza has a rolling selection of sculptures. Locals have enjoyed them all except the latest one that was unveiled this Saturday. 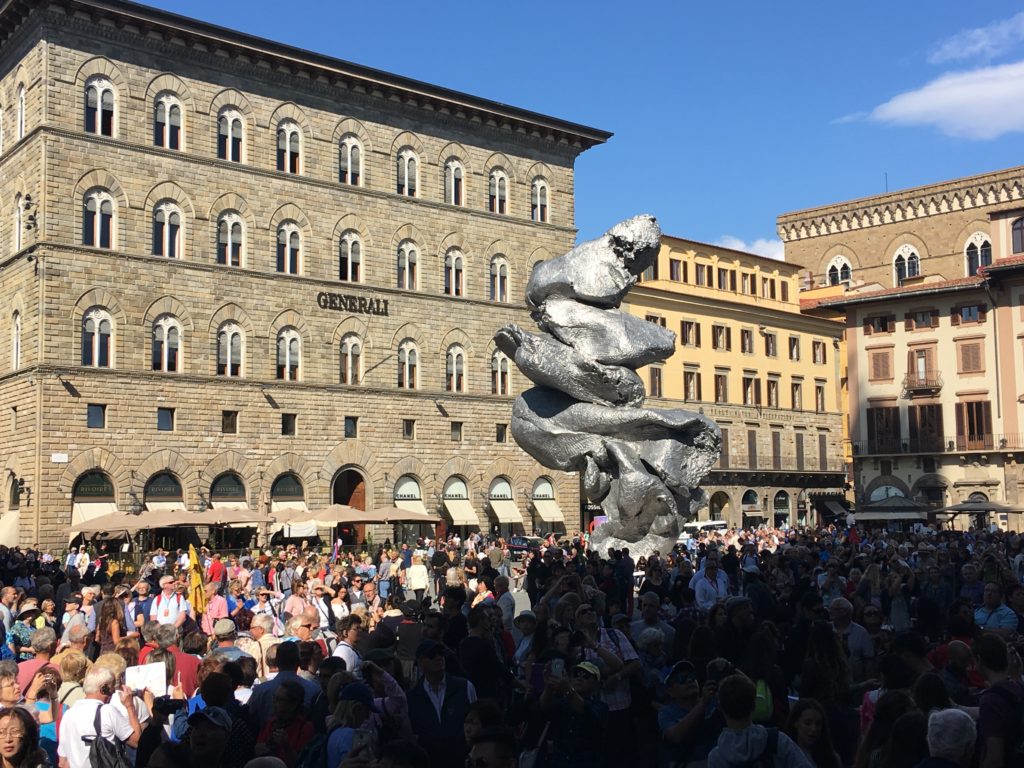 It is called ‘cold clay’ or ‘clay form’ but most Florentines are not best pleased with it and are calling it ‘God’s Turd’. I thought it looked like Pyrite or fools’ gold. Which begged the question was the artist asking you if this really is art or are we just all fools for believing it is. Yes many sculptures start out as a lump of clay but displaying it alongside some of the most beautiful marble statues ever made is a huge risk and not popular with locals. 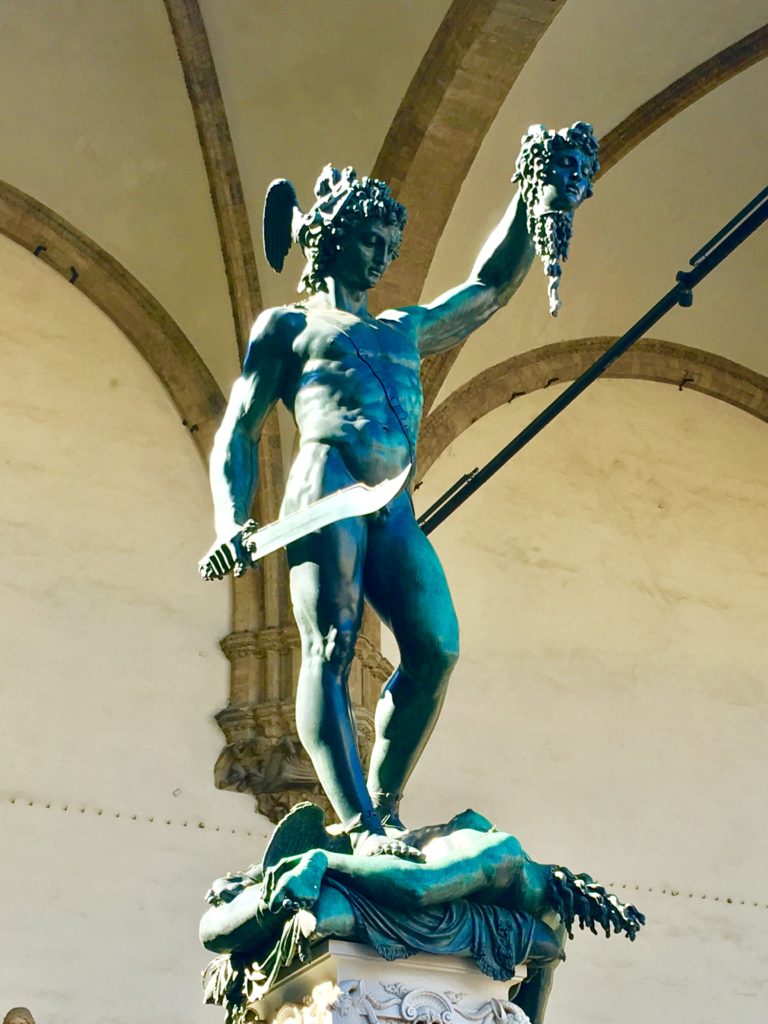 Standing out among the white marble is of course Cellini’s bronze sculpture of Perseus with the head of Medusa 1554. 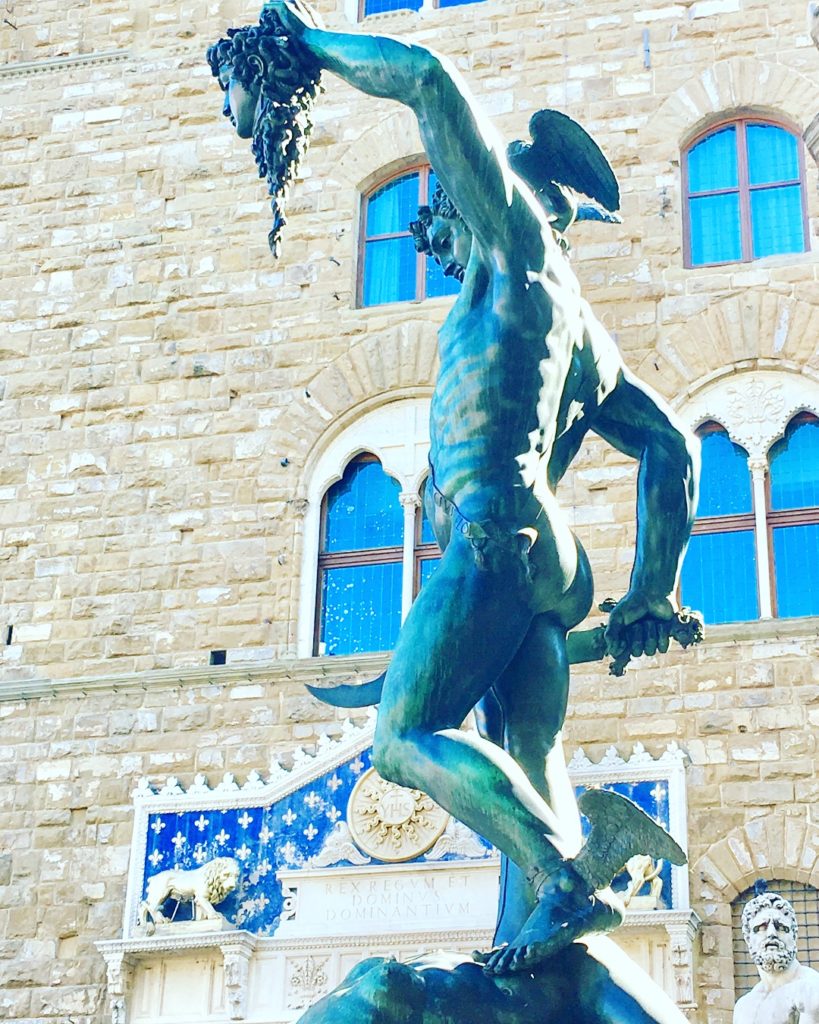 Carlos tells me he once wrote a 3000 word essay on this piece. I will end my short paragraph by saying that it continues to inspire modern art and fashion. 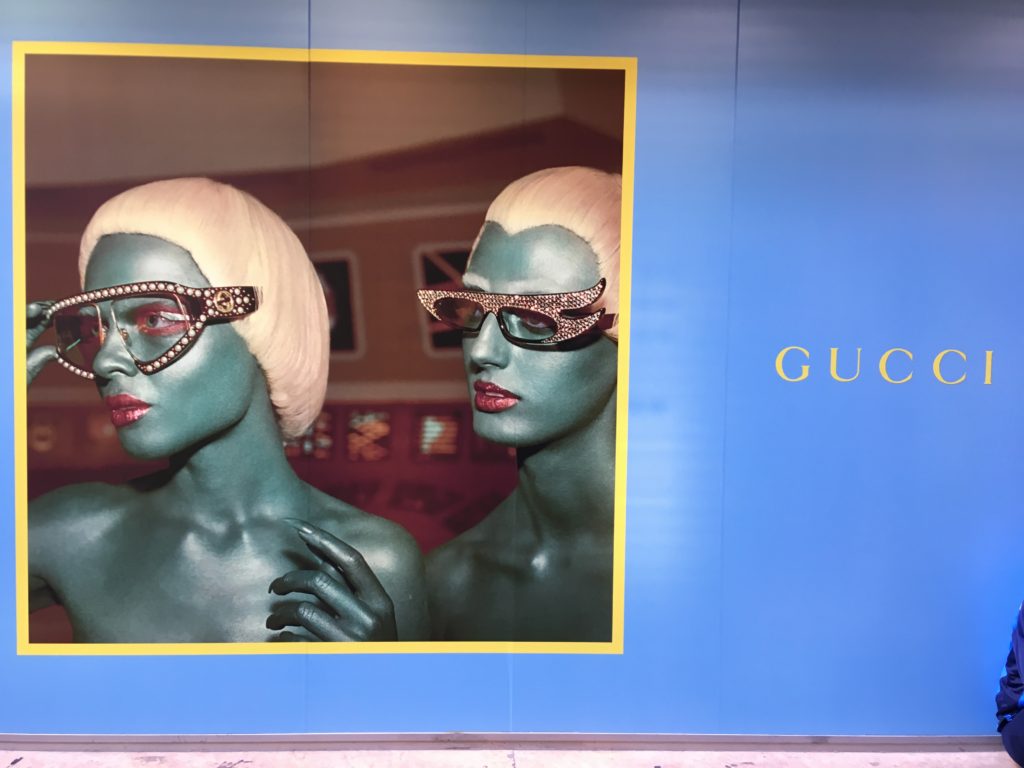 2 Replies to “a room without a view”