So people we are hearing more and more about the need for better gut bacterias all the time. Science is trying hard to crack the secret dialogue between bacterias in our bodies and the brain. So I started out with Sourdough Starters. then I was slurping back the Kefir but now I’m all plant based I am awaiting some magic Kefir Pearls to make a non dairy drink but in the meantime I bring you Kombucha. The magical fermented tea from… well that’s just it. Its origins have been lost. But it cam from China or Japan. The name is Japanese/Korean. In 415CE the Emperor Inyko was treated with a fermented tea by a Korean doctor called Kombu. Cha means tea so the name Kombucha certainly comes from this. But the Chinese have long been obsessed with creating longevity elixirs. This of the heavenly peaches that the Monkey King stole and ate making him immortal. In 220BCE Emperor Qinshi Huangdi was said to have created the ‘Immortal Tea’ but it has many other names like Sea Treasure, Stomach Treasure, Hongchajun (red tea fungus) and Chameijun (tea mould). 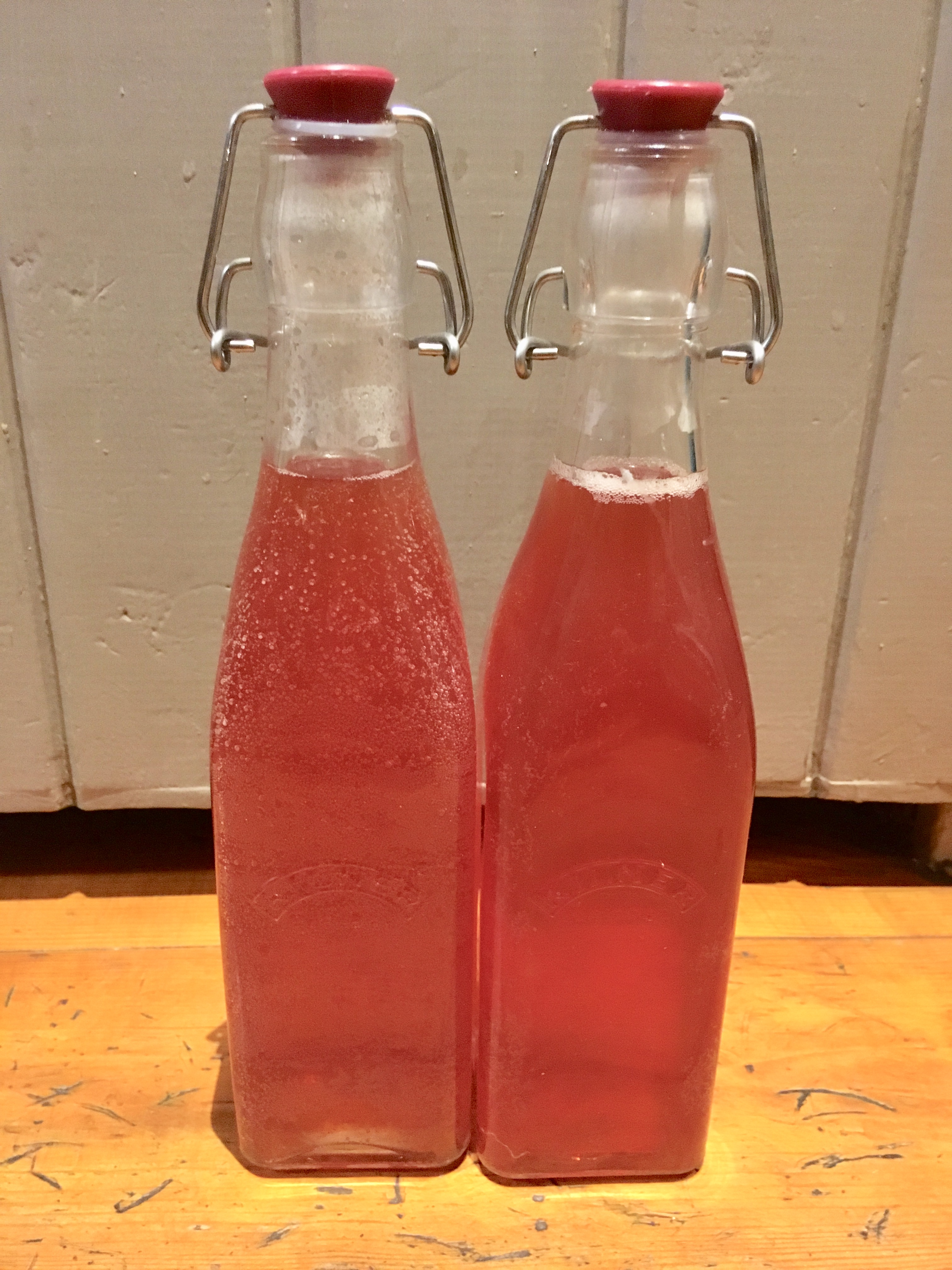 So shrouded in mystery and legend Kombucha is linked to warriors as a strength-giving elixir in both Japan and by the hoards of men rampaging with Genghis Kahn. Like most wonderful things from afar it travelled the Silk Road to get to us in Europe. It is especially popular in Russia and may have its true origins there where it is legendary in it’s magical anti-radiation properties! So let’s get brewing and consuming this magic gaseous potion. 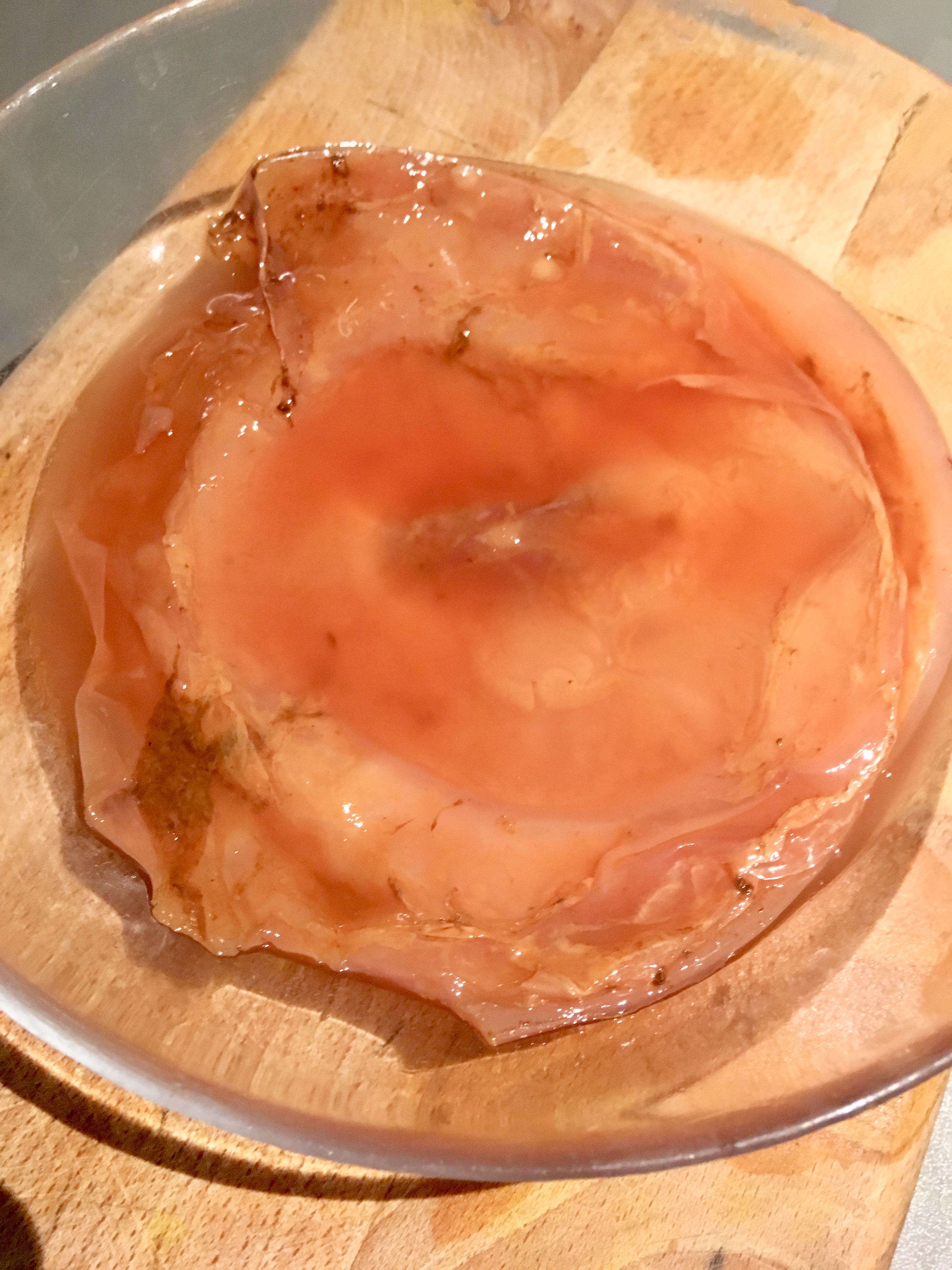 The key ingredient you will need is a S.C.O.B.Y which sadly stands for Symbiotic Culture of Bacterial Yeast. It should be called a tea fungus or a tea-creature as it looks like a jelly fish. I got mine from Polly Kombucha (her last name is Kombucha!! I know!) who works in our local health food store. Along with 200ml of fermented tea starter to set me up in the brewing business. For this recipe I have created the amounts for a single litre brew but you will need to make more than that. This way you can find a ceramic jar or Rumtopf Pot and see how many litres it will hold and multiply upwards. Many recipes talk about glass jars and over fizzing causing explosive results. Polly says sunlight will kill the creature like a vampire so a darkened ceramic jar is better. 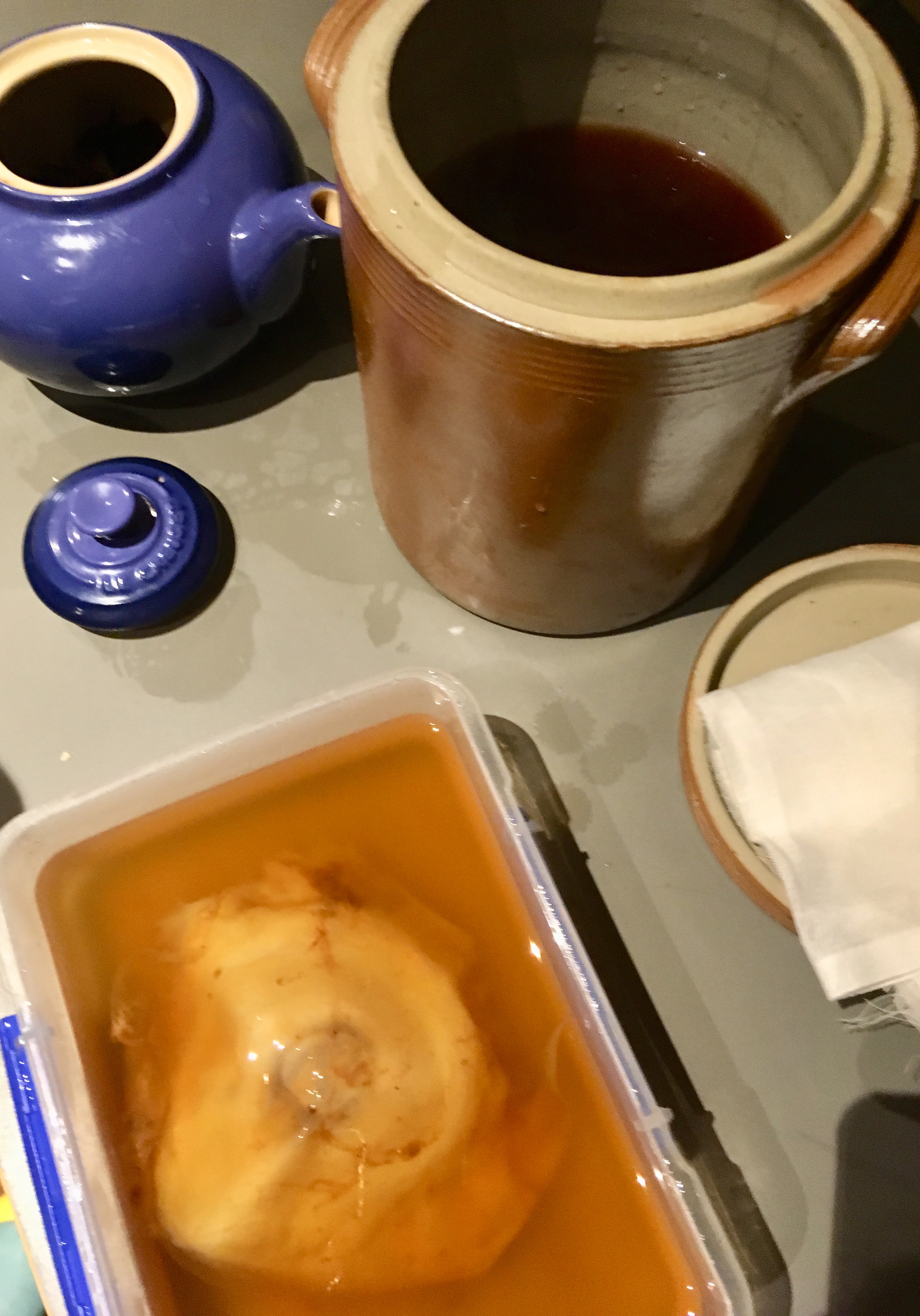 Make a large pot of tea and let draw for 10 minutes. I have a six litre jar so I made 2 large pots of tea. Well one pot and one jug. 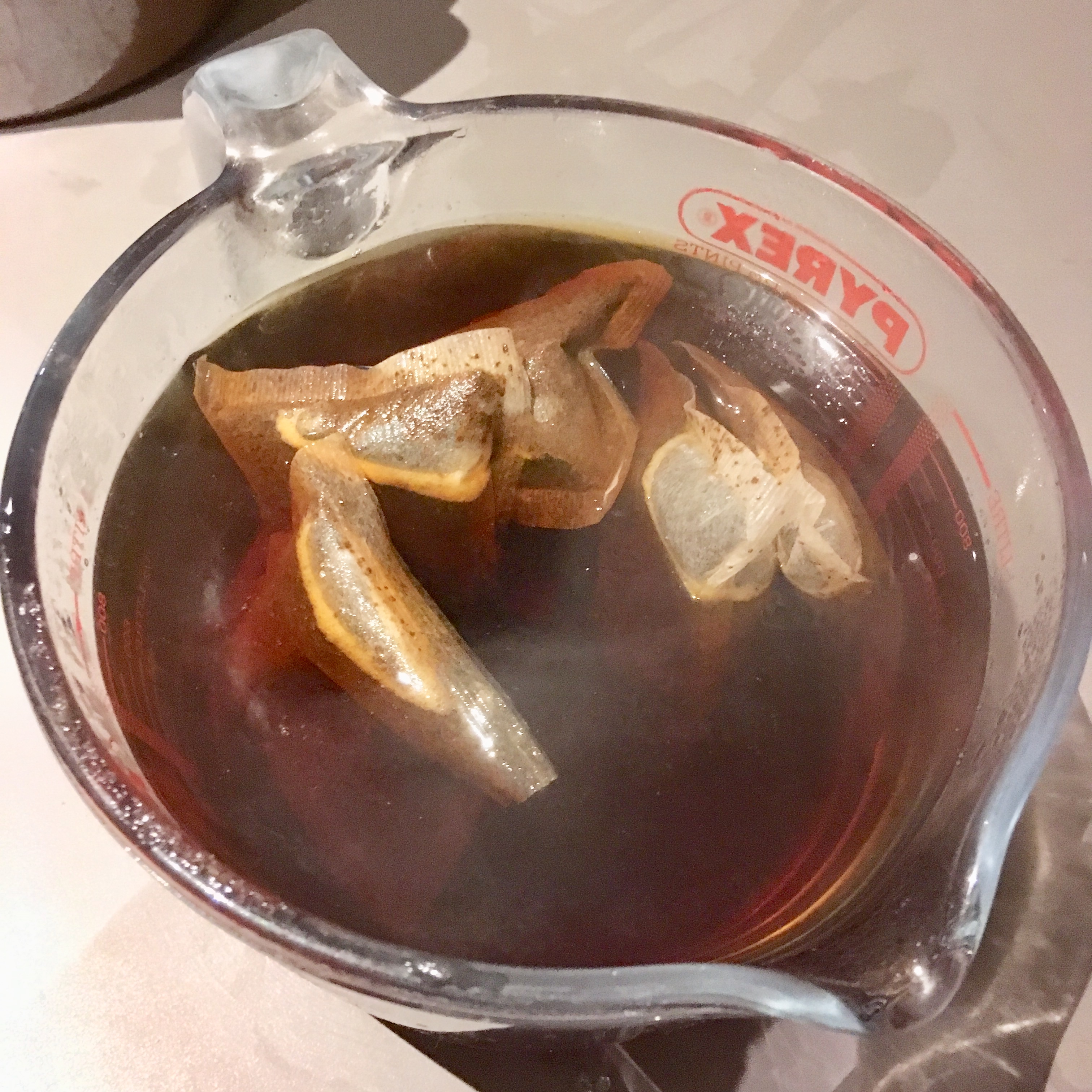 I dissolved 480g of raw caster sugar in a litre of boiling water. I did this directly in the bottom of the 6 lt pot I was using. Luckily it didn’t shatter. Phew. But it did create a lovely light golden coloured liquid. 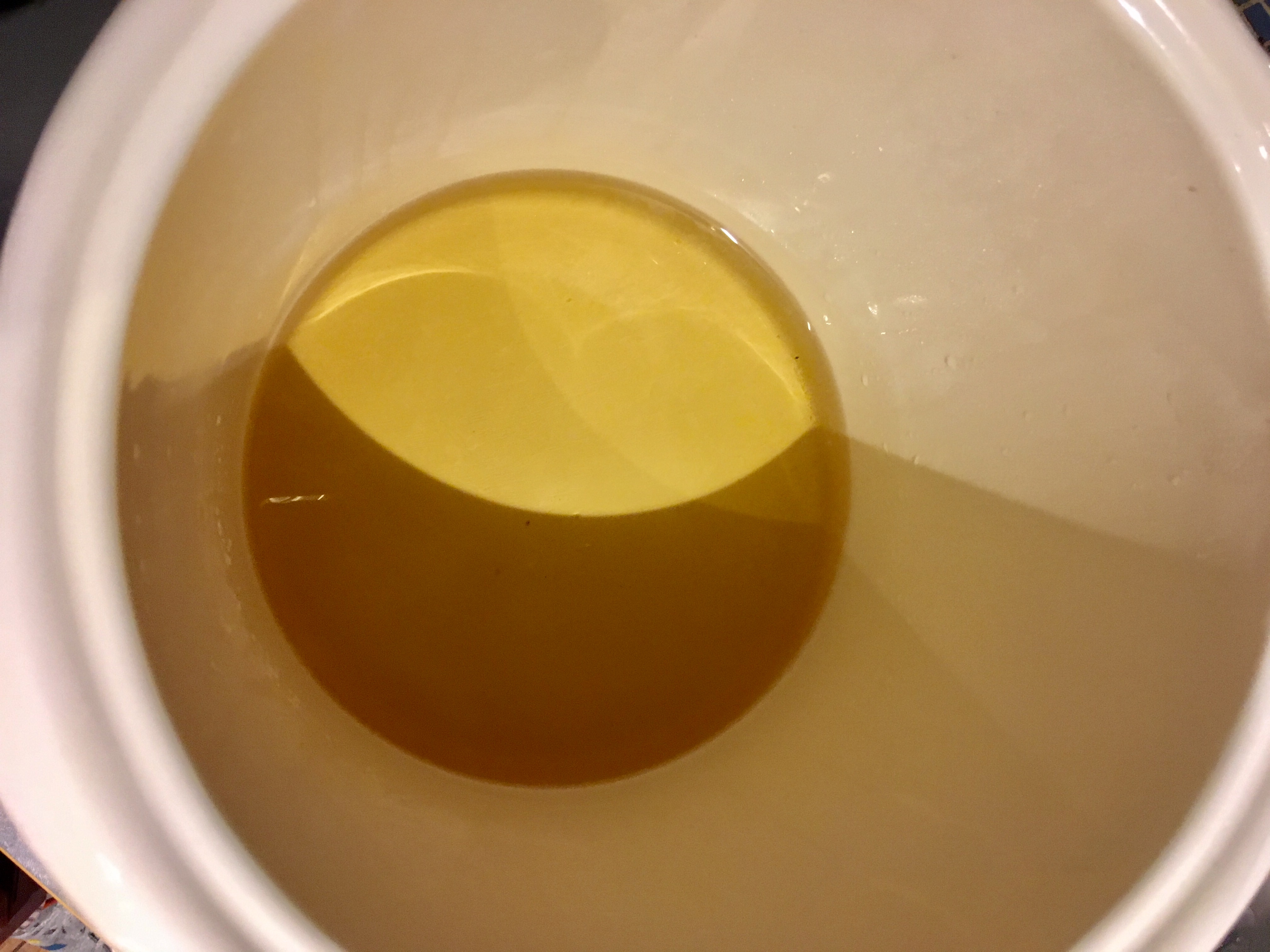 Another litre of boiling water was poured over the hibiscus flowers and they were left to steep too. I love the rich red colour of hibiscus tea and often make an iced cold summer one with honey and lime. 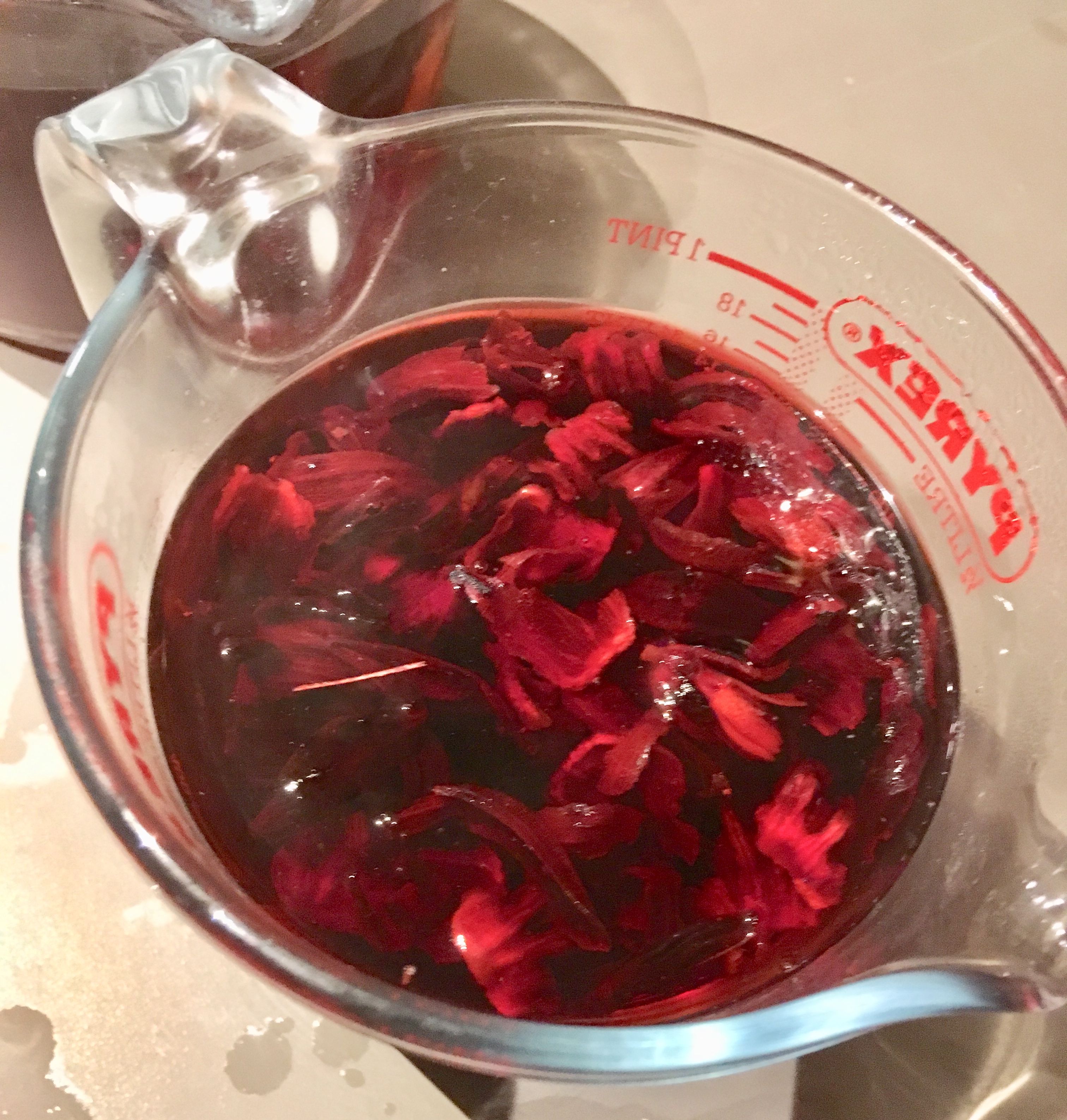 Strain out the flowers and remove the teabags. Then I poured the two pots of tea the hibiscus tisane and the sugared water into my jug and topped it up with cold water. Many people talk about using filtered and boiled water only but I’ve always been a tap watering kettle kind of guy. It is important that the temperature is no hotter than 28C before the magic is added. 600ml of the last batch of Kombucha was added and then the S.C.O.B.Y. was placed on the top. Here is my starter from my first batch ready to help create a new brew. There is 0.5% alcohol is Kombucha Tea. 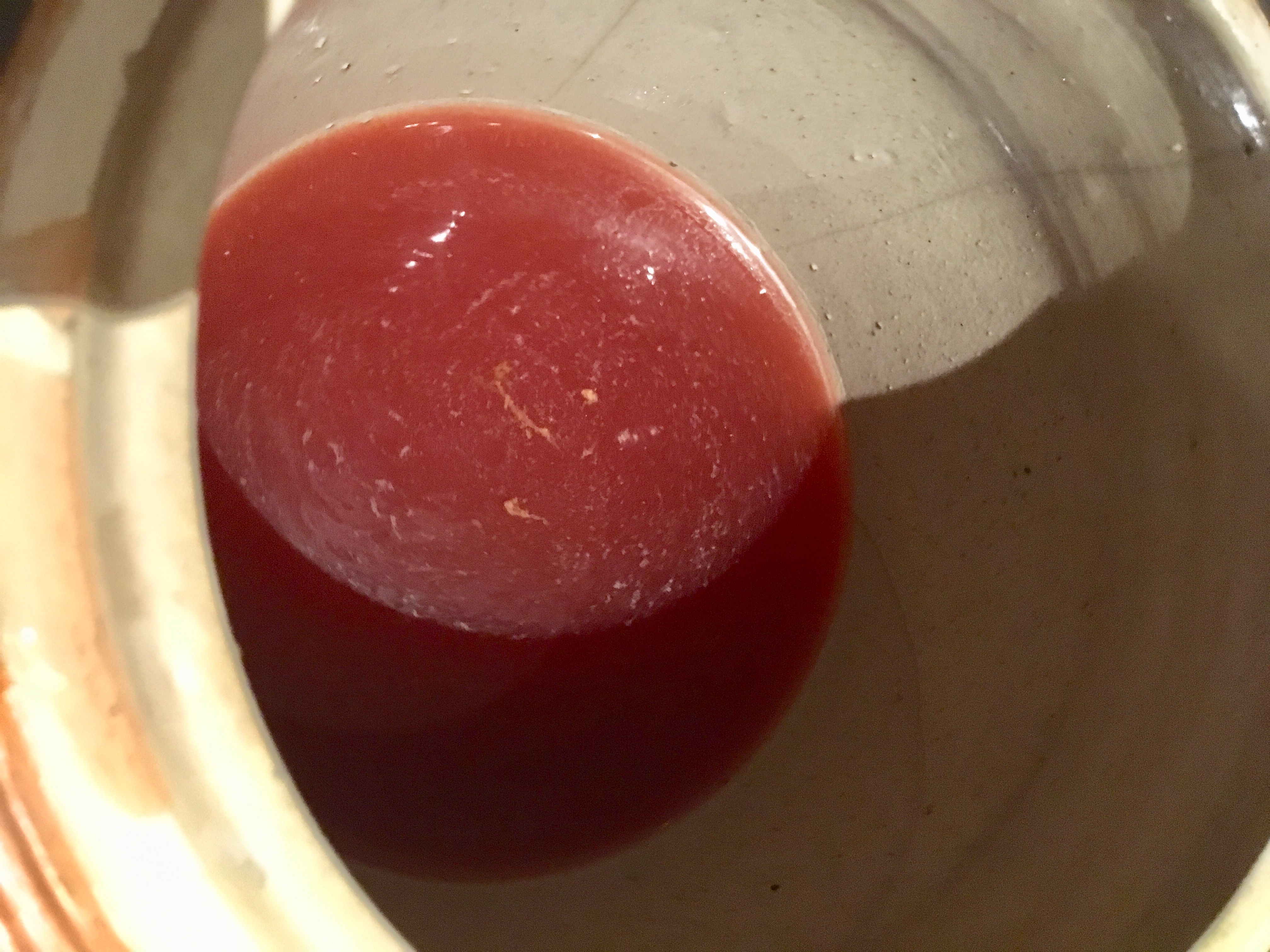 When I made my first batch my S.C.O.B.Y. had made a baby underneath it. This meant that I could peel the new growth off from underneath and use that to make 2 litres of green tea and mint Kombucha too in my old jar. These are then covered with folded layers of muslin and the ceramic lid popped back on keeping the liquid dark but able to breath. The fermenting process is always a different time period depending on the heat and weather. Two to three weeks is normal. But you will have to keep trying it. The fizz should vanish but if you don’t catch it at the correct moment then the entire batch will turn vinegary. Still drinkable but much less pleasant. 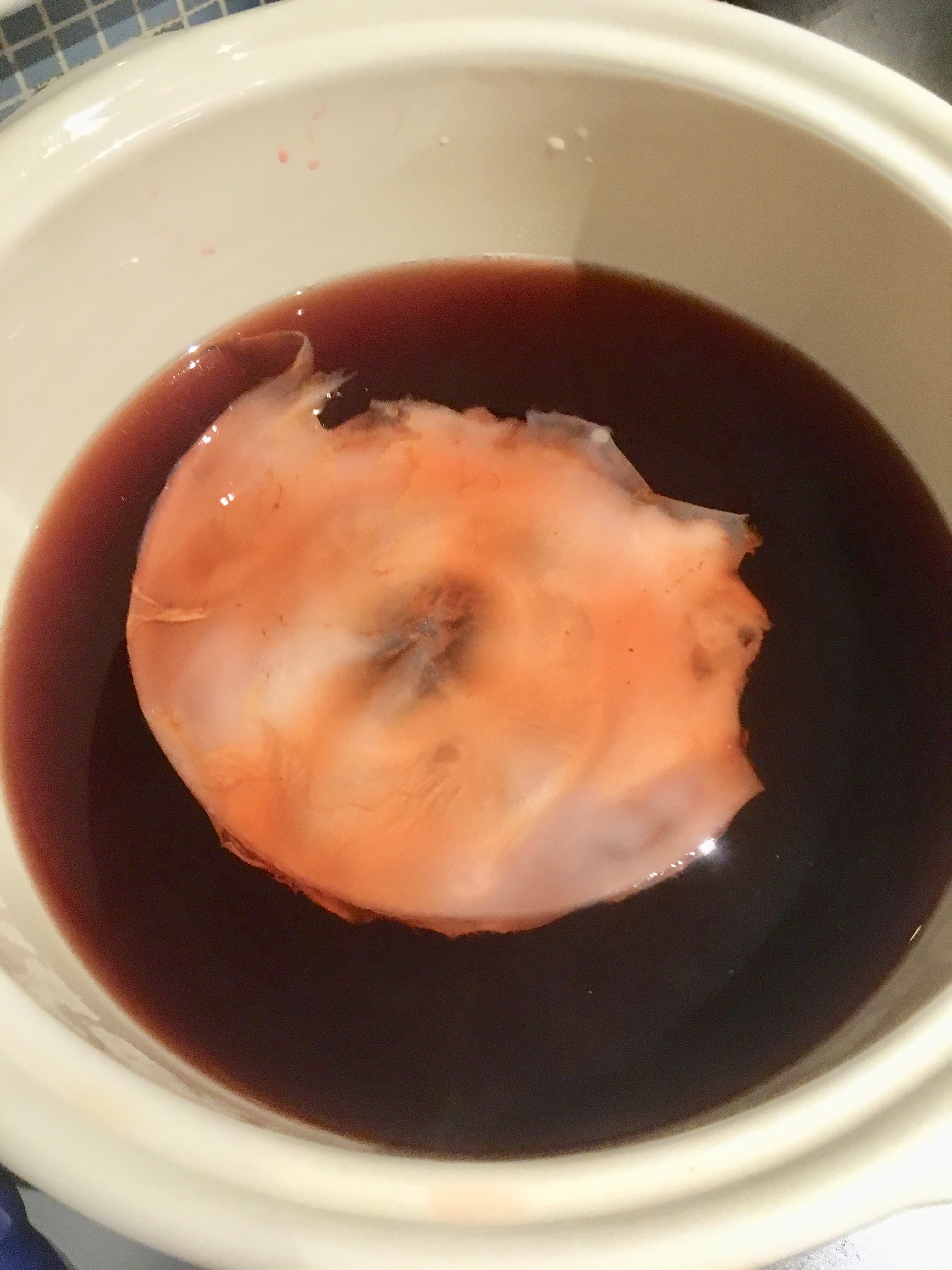 Don’t worry if the S.C.O.B.Y. sinks to the bottom it will rise up as the fizz develops. Just let nature do its magical best and keep sipping it after 2 weeks to catch the optimal moment to bottle it and refrigerate it. There are many conflicting health claims and safety fears around Kombucha but not enough to put me off.