Driving back from London to Hastings along the A21 is my most favourite farm shop, Eggs to Apples. Here they sell the finest local produce all inside a stunning modern Scandinavian building. They also sell traditional Jersey Royals that taste the same as they did when I was a small child when the potato farmers used to collect seaweed from the beaches and drag it up to their fields and use it to prepare the soil. This seaweed magic gets deep into the potatoes and adds that flavour edge that is lacking in most potatoes grown with modern fertilisers. Today though I was looking for another absolute favourite. Purple Vitelotte potatoes. 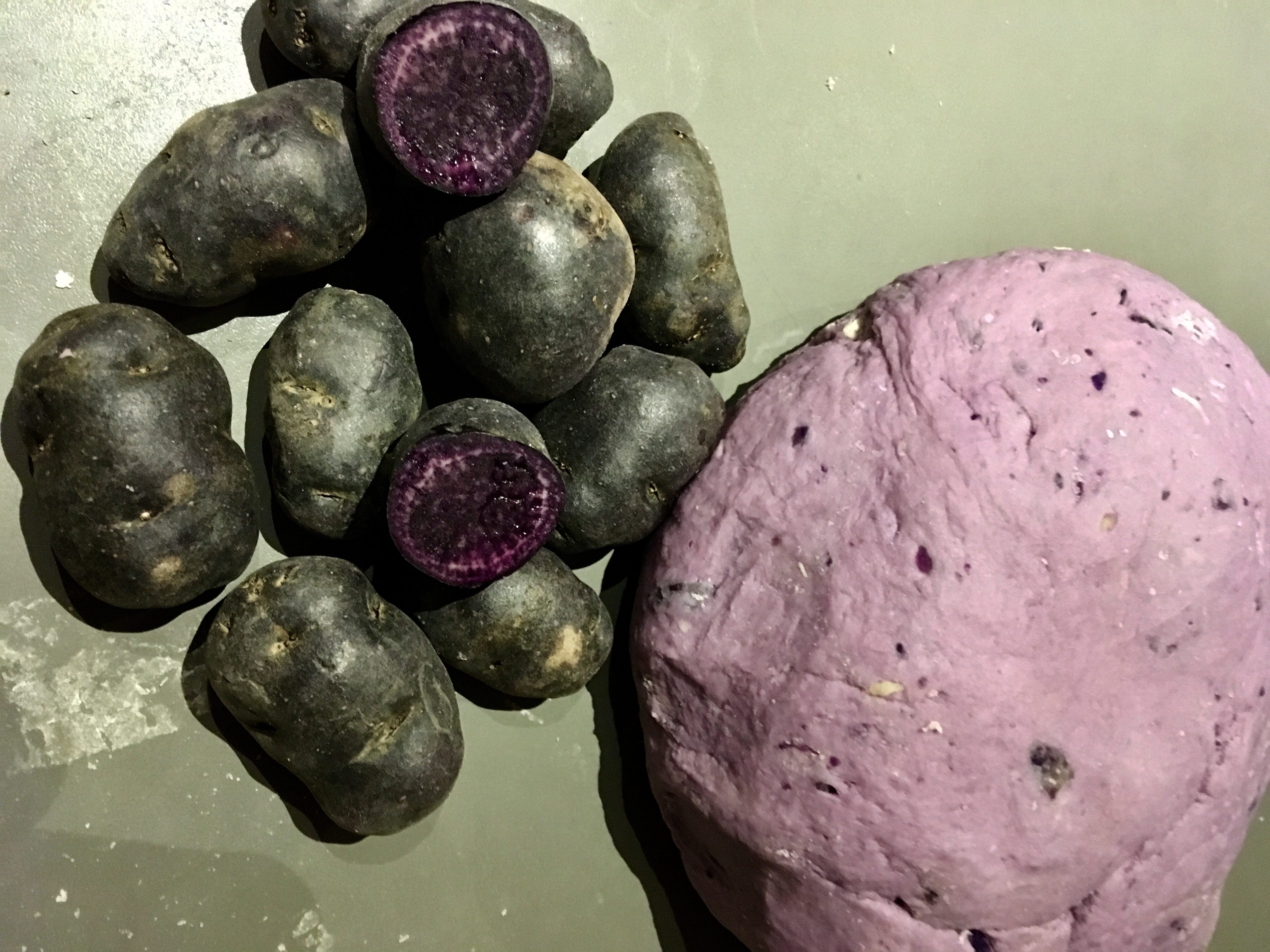 This French gourmet cultivar is a deep blue purple colour and none of the colour is diminished during the cooking process. In fact it seems to increase in brightness. I love to use them to make purple potato bread. And this bread has a magic alchemy that happens when you toast it. The pale violet colour becomes a rich ‘Purple Rain’ purple. Or Bat Girl bread. I’ve long had a obsession with Yvonne Craig as Bat Girl in the Adam West 60s TV show. She was the original Librarian Super Woman. What’s not to love. And unlike the Bat Boys in their safe and enclosed Batmobile – Barbara Gordon rode wild on a motorbike without a crash helmet. Just a ginger wig and Lycra mask for protection – what a woman. 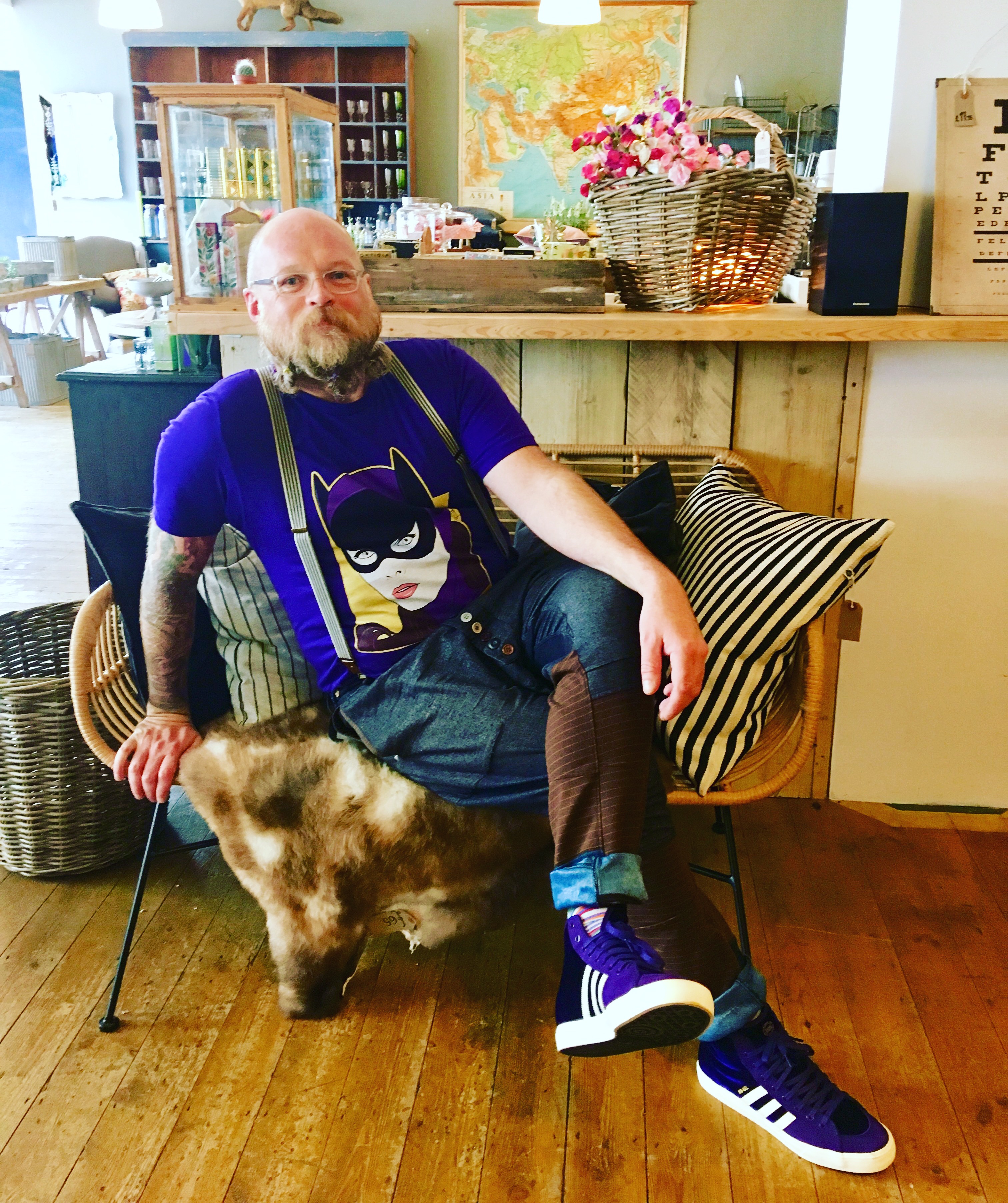 Usually when I make potato bread I peel the potatoes before boiling to keep the texture of the bread pure white but for this one the skins create wonderful deep purple flecks throughout the bread so I just weigh the potatoes in their skins and boil them for 15 minutes. Save the cooking water. We need some later. It is the most marvellous clear deep green colour. 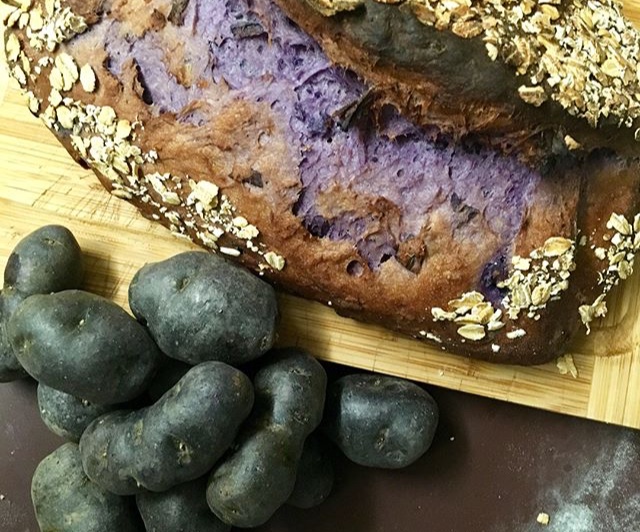 Boil the potatoes for 15 minutes in their skins. Drain them and reserve the cooking liquor. Mash the potatoes along with the salt and oil. This needs to be as smooth as possible.Dissolve the sugar in the 150ml of cooled cooking water and stir in the yeast and leave to get foamy. Once it is happy and alive pour the yeast mix into the creamed potatoes and stir. Then add the flour a little at a time. This will look almost impossible. But keep going. When the dough seems to refuse to absorb anymore flour, turn out onto a work surface and knead in the remaining flour. There is no need to knead this longer than to get all the flour into the dough. Pop into a large oiled bowl. Cover with a lid or clingfilm and leave for an hour to bloom to double in size. 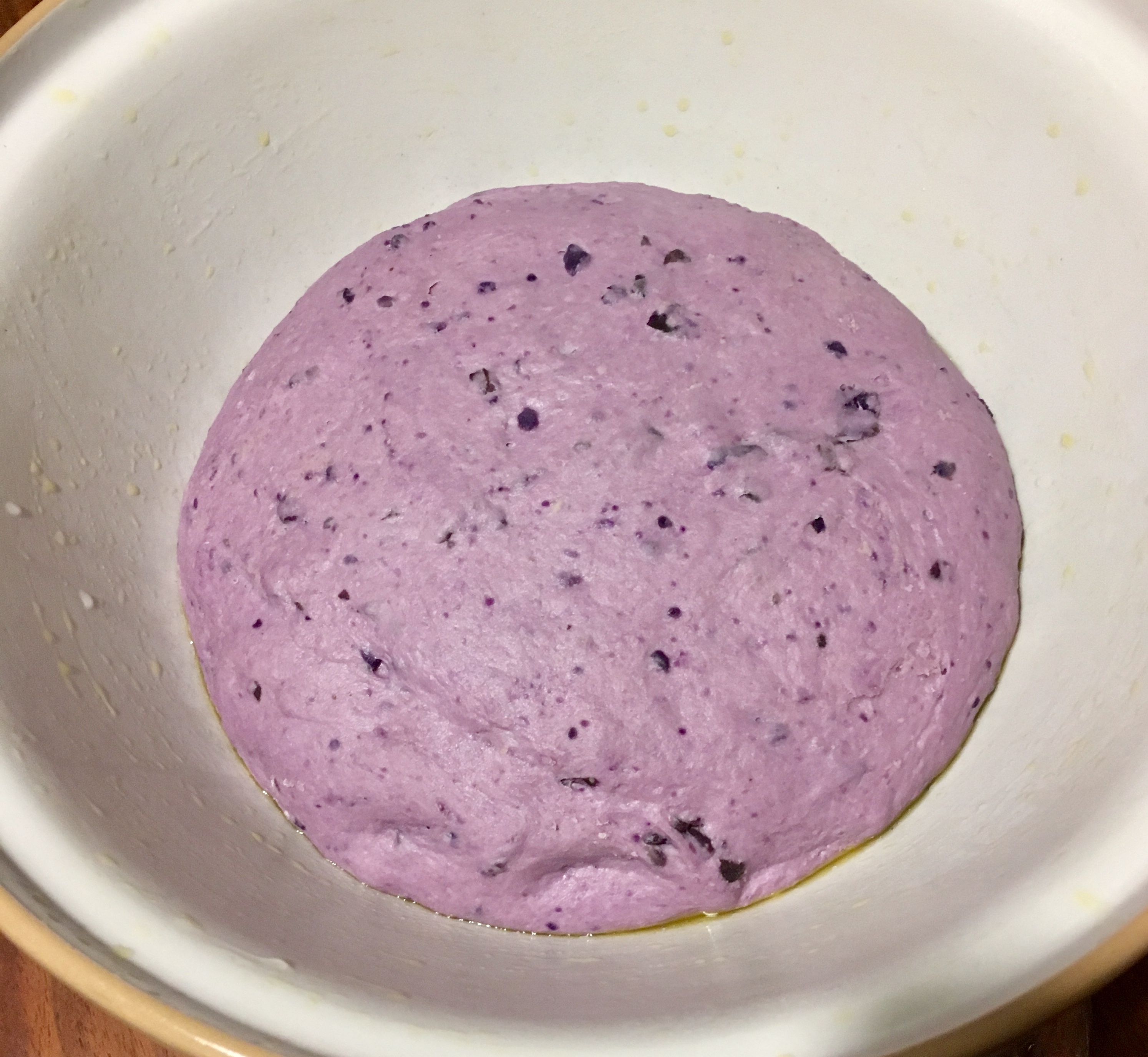 Remove the dough and knock back. Weigh the dough and divide in half. Roll out into two rectangles about 2-3cm thick and fold in thirds so the top has a seam along one edge. Either place on baking  sheet or in a low sided tin to create twin batch loaves as I did today. Leave this to rise for 30-40 minutes. 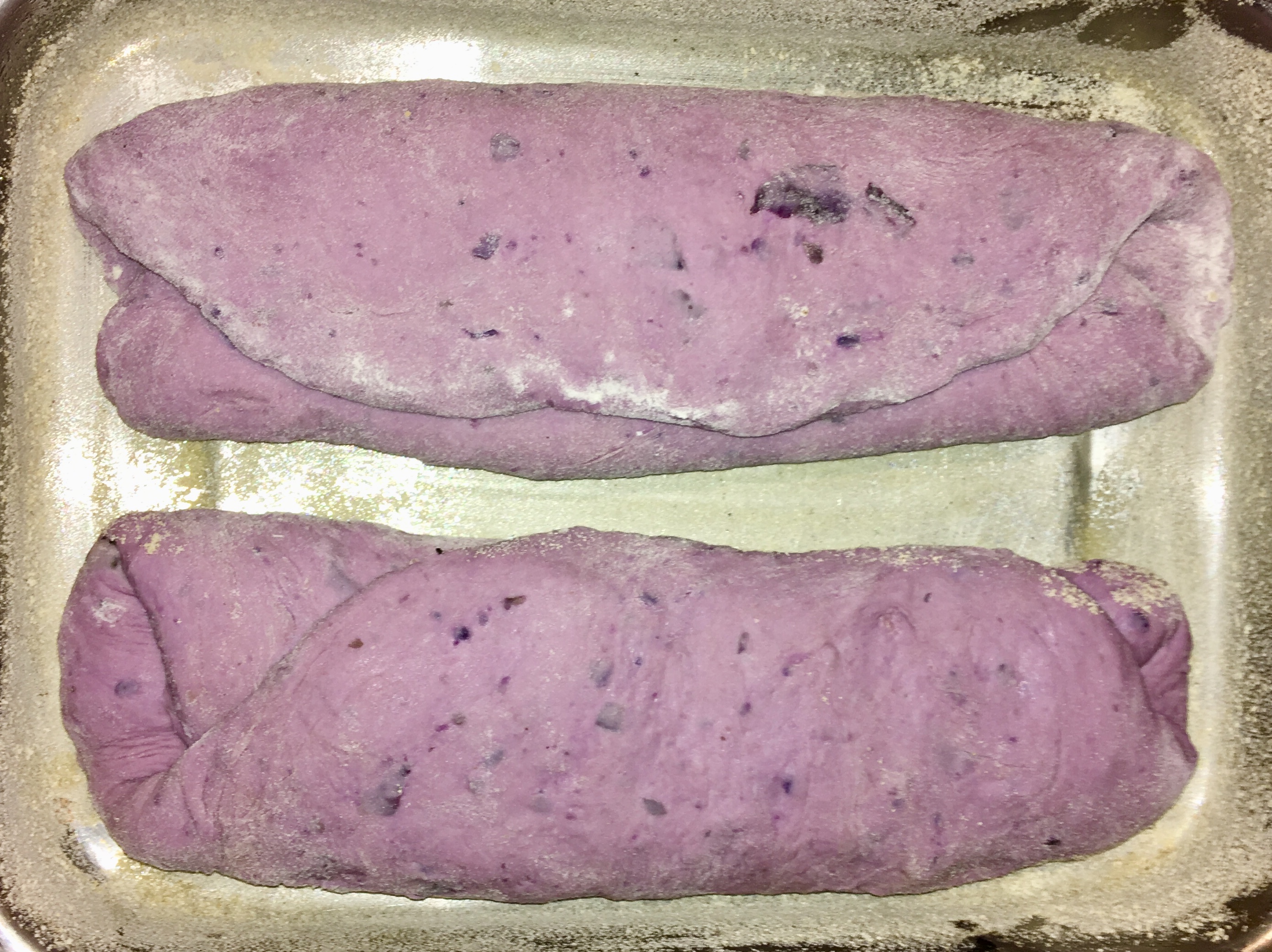 Brush the surface with water and scatter blue poppy seeds on top. Either leave like this or cut lines into the top with an oiled knife. Pop into the oven at 200C (400F GM7 ) for 40 minutes. After 10 minutes reduce the temperature to 180C (350F GM5 ) or the crust will become too dark. 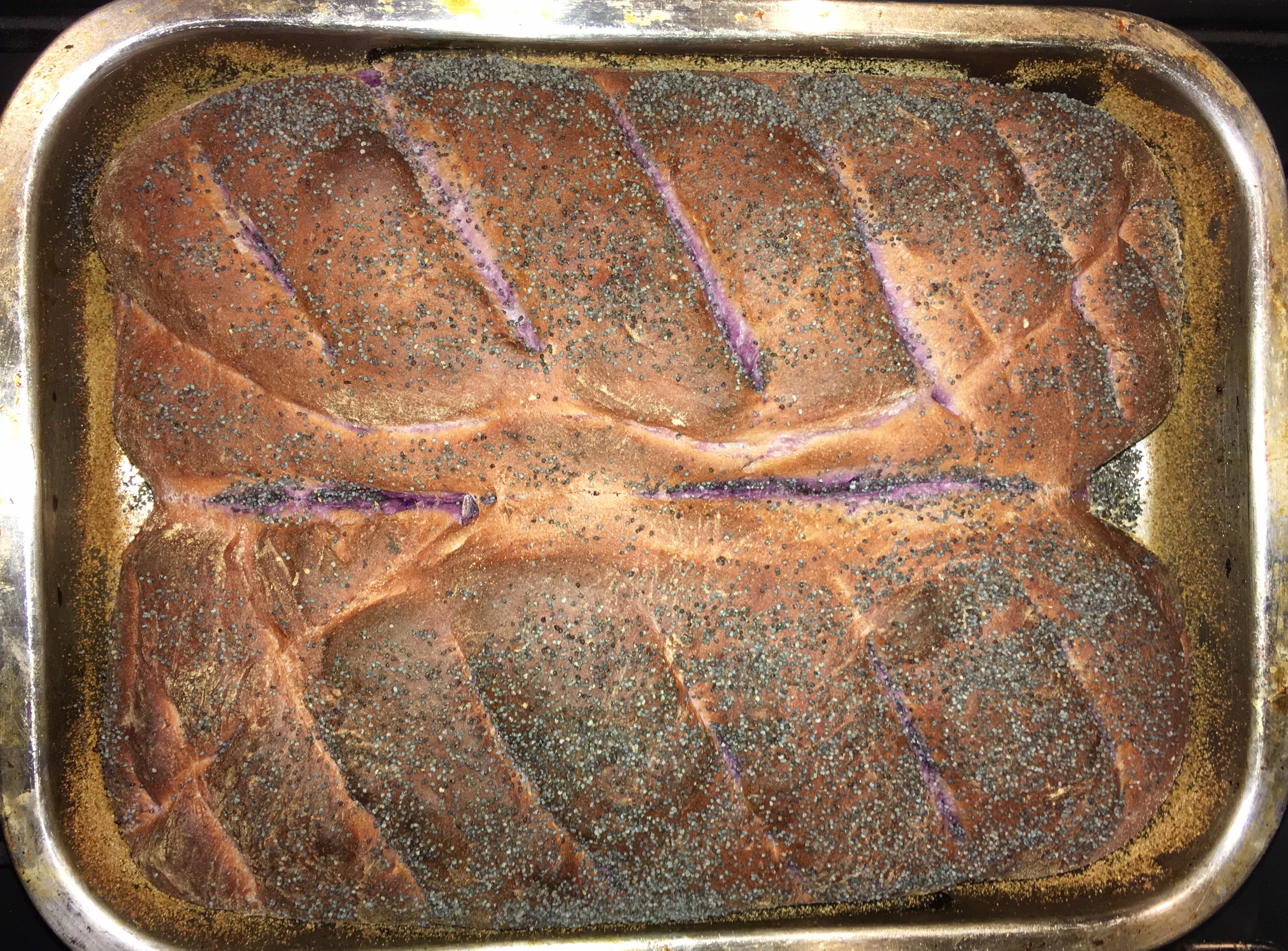 This bread is such a joyous colour and the texture is so soft and light. The flavour is rich and slightly nutty taste with a hint of the scent of chestnuts. Tearing the two loaves apart it the best feeling and reveals if the bread is cooked through. It it looks damp them close the seam back up and pop back in the oven. I also like the contrast of oats against the brown crust and purple centre. This is an all round wonder centre piece for so many meals. Try it with my orange Thai carrot and lentil soup. 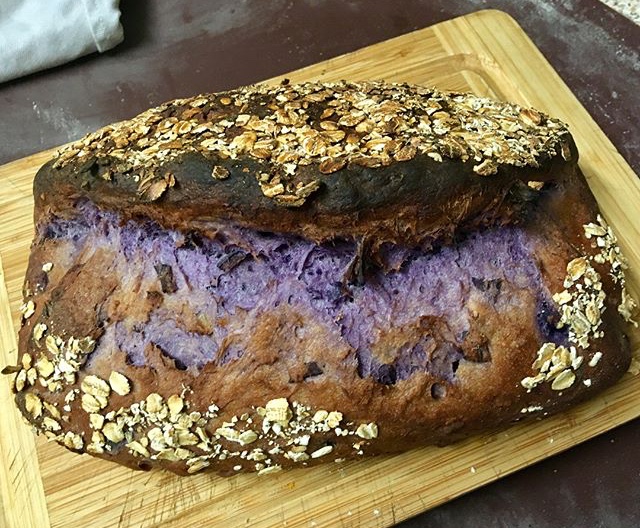 One Reply to “batgirl bread for busy librarians”