So I touched down from my perfect tiny flight from London City Airport to Venice Marco Polo. From inside the terminal you follow the signs to the Water Bus! I know! There’s a tube style map and all the routes are canals. It’s marvellous. The Vaporetto will take you to all the islands that make up the city of Venice. A pass cost me 40€ for 72hrs and they run all night. How long did London waited to get all night tubes? Mind you you can’t walk home in Venice unless like Jesus you can walk on water. 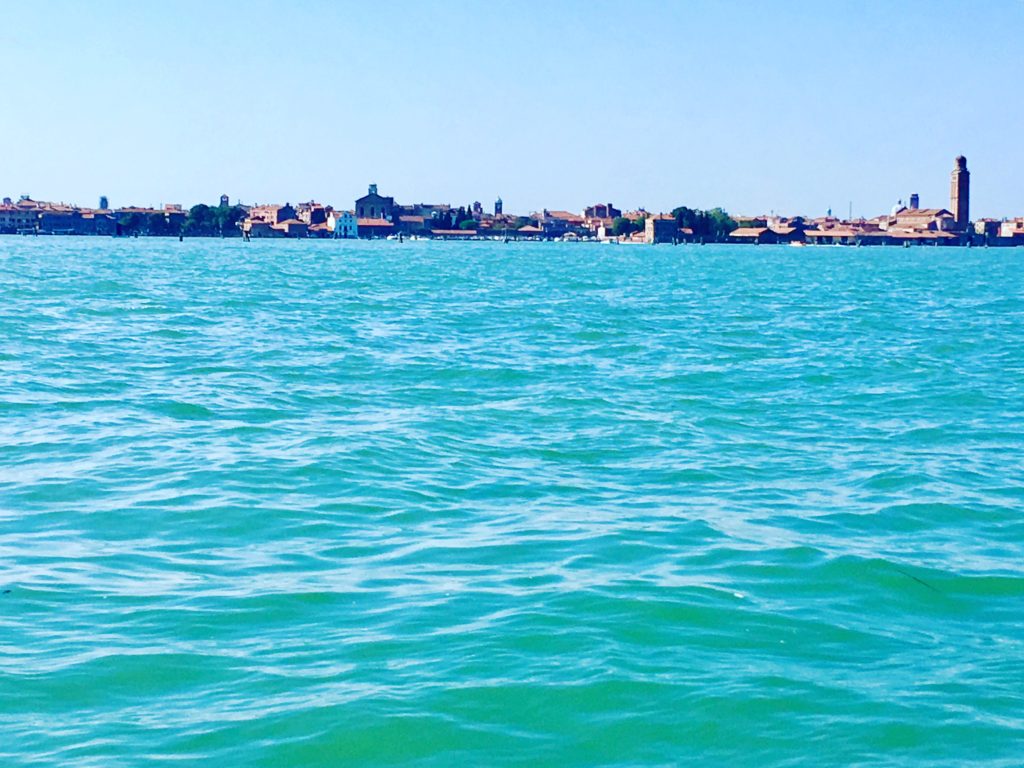 My hotel is on the Lido. A long stretched spit of land with a beach along one edge and yes… this was the first Lido and the first tourist beach. Wow. Also it is the home of the Venice Film Festival. It is also one of the the few parts of Venice that allows cars. The petrol station I pass walking to my hotel has a separate waterside set of pumps for filling up the many boats here. 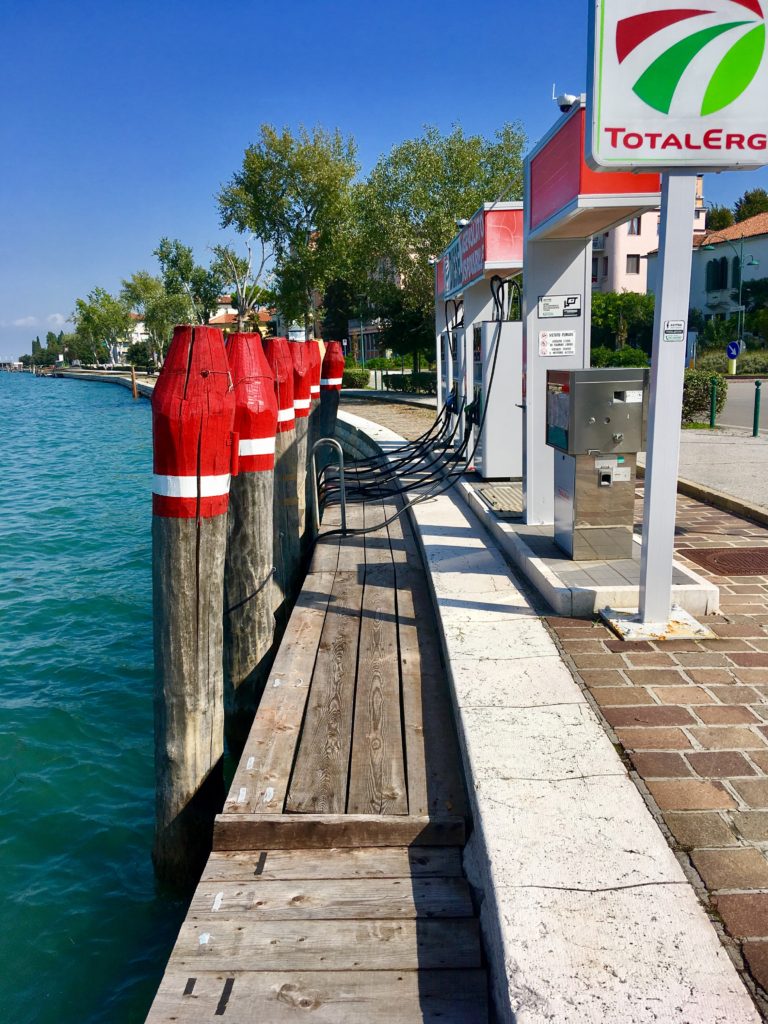 It has a giant golf course at one end and a lighthouse at the other. It is bursting with beach residences and trees bursting with starlings and tiny tanned sparrow-like Gucci encrusted older ladies looking fabulous. Everywhere is a vista of sheer delight. Even the water bus stop frames the city in its open air archway. 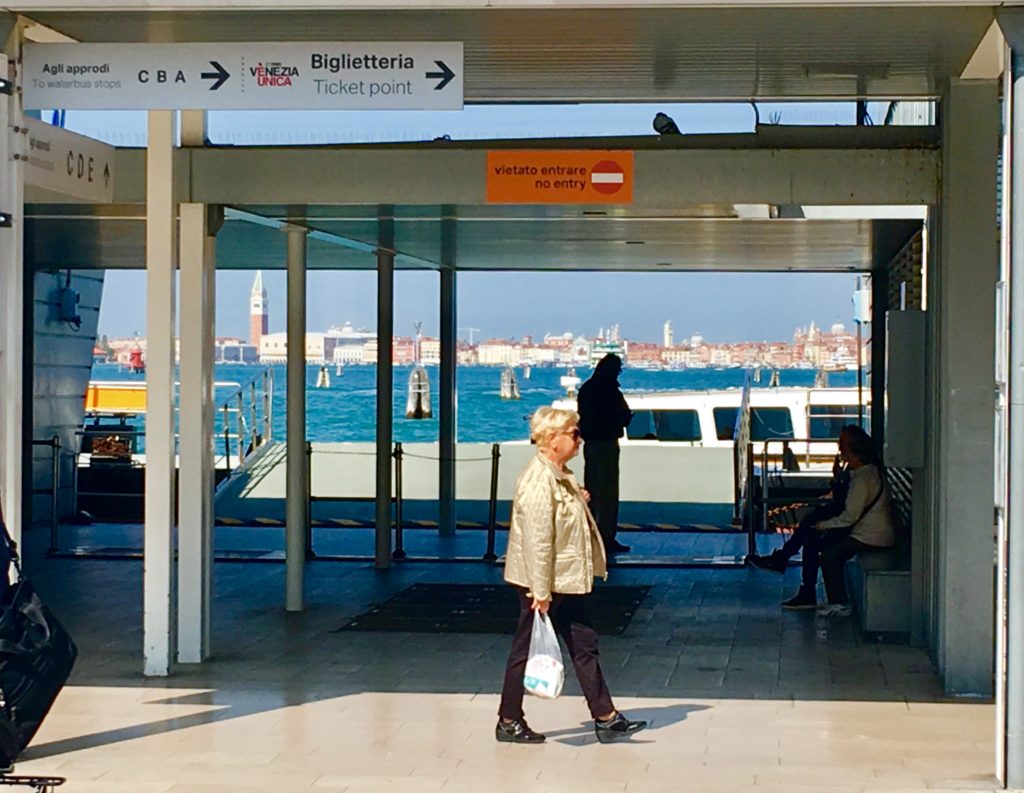 A stroll down the main drag leads quickly to an enormous stretch of sandy beach punctuated with sunbrellas and locals catching late September rays to enhance their deep tans. Sexy strains of samba fill the air from the bars and caffès. 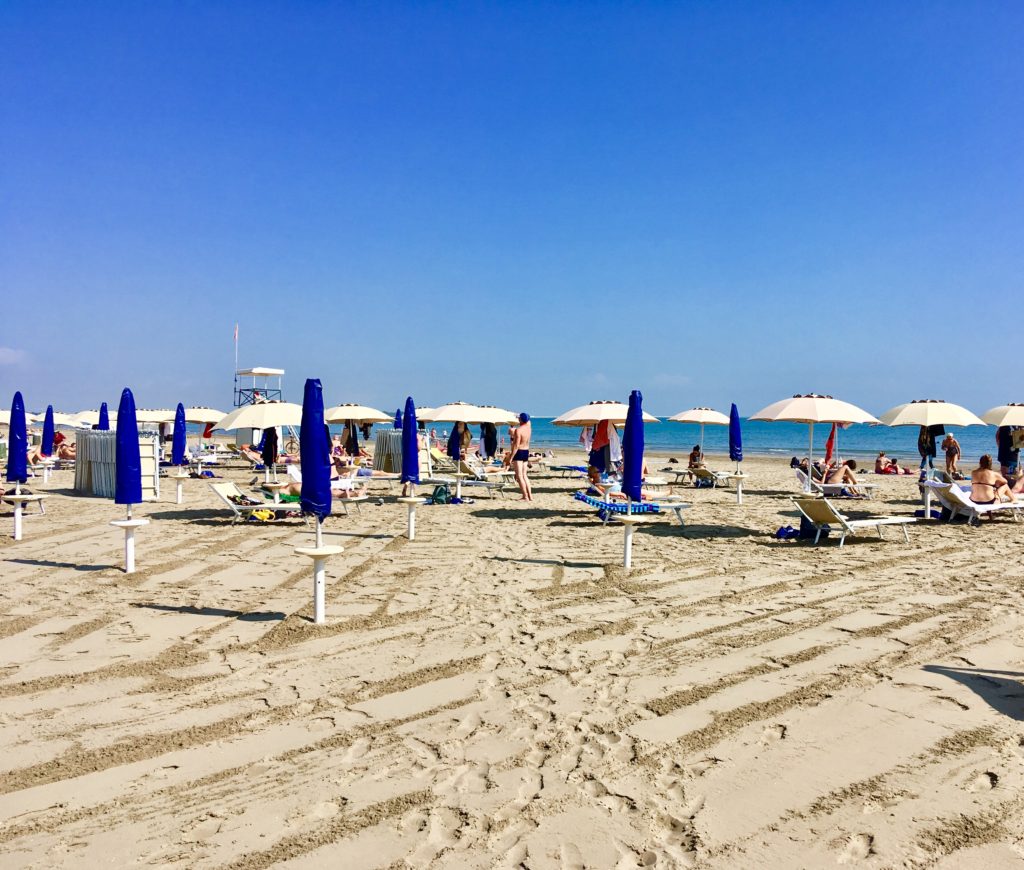 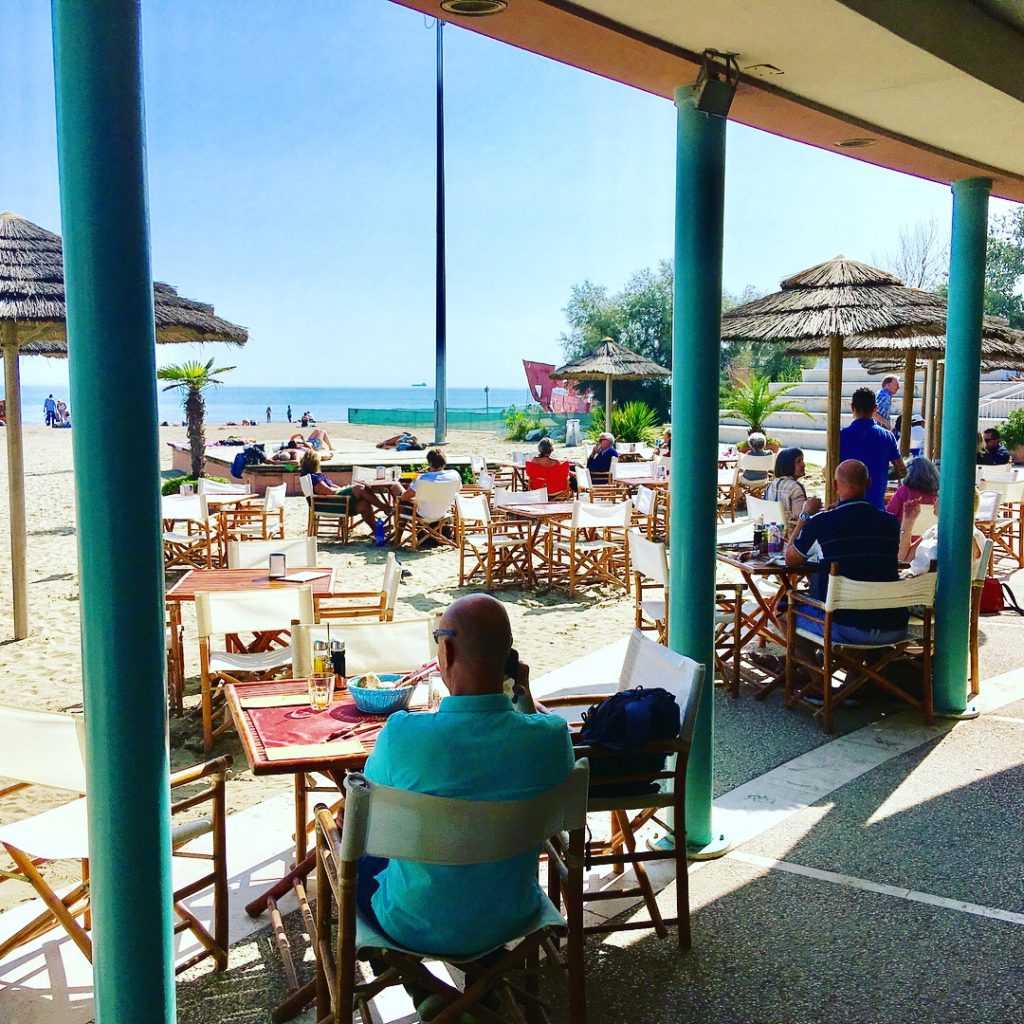 After a long wander round the Lido I wait until dark to set off for Venice proper.  As I head for the water bus the sun begins to sink and the water comes alive with with soft pinks like a Canaletto painting. 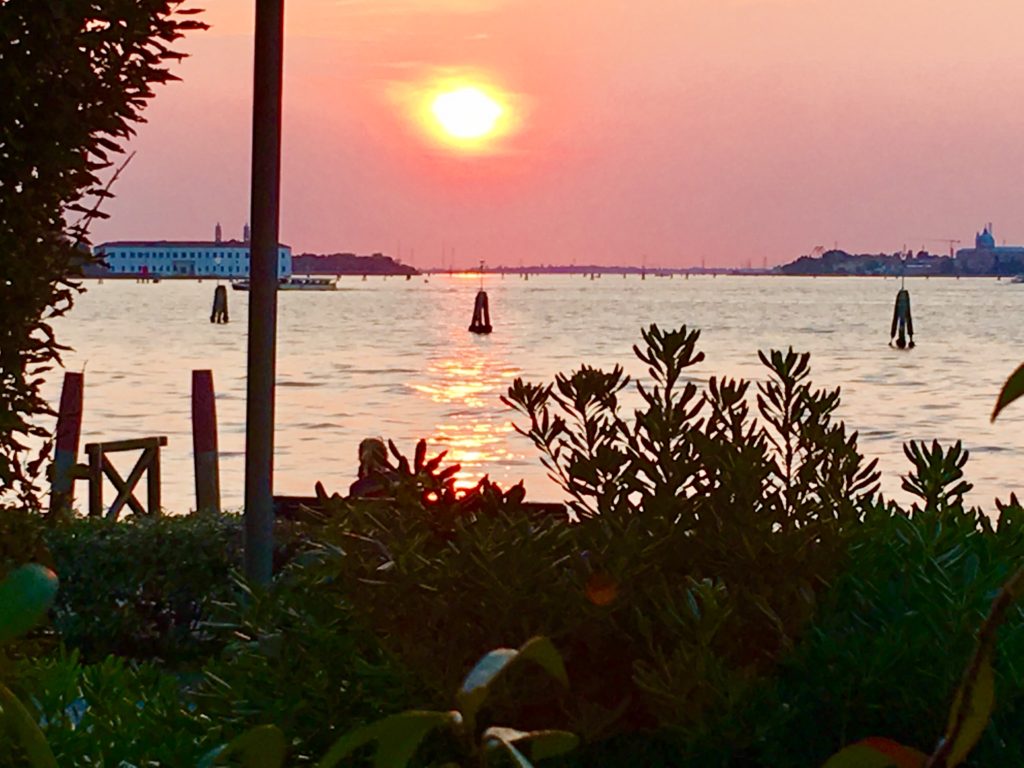 The water bus glides into the Grand Canal and i head for St. Mark’s Square. The giant armchair of the world. Once a canal ran through the centre but was covered over so that the square could, at the time hold the entire population of the city. I decided that I wanted my first glimpse here to be lit by the hundreds of brass trident lampposts crowned with rose tinted Murano glass shades that are pink to compliment the sunsets over Venice. I wasn’t disappointed. 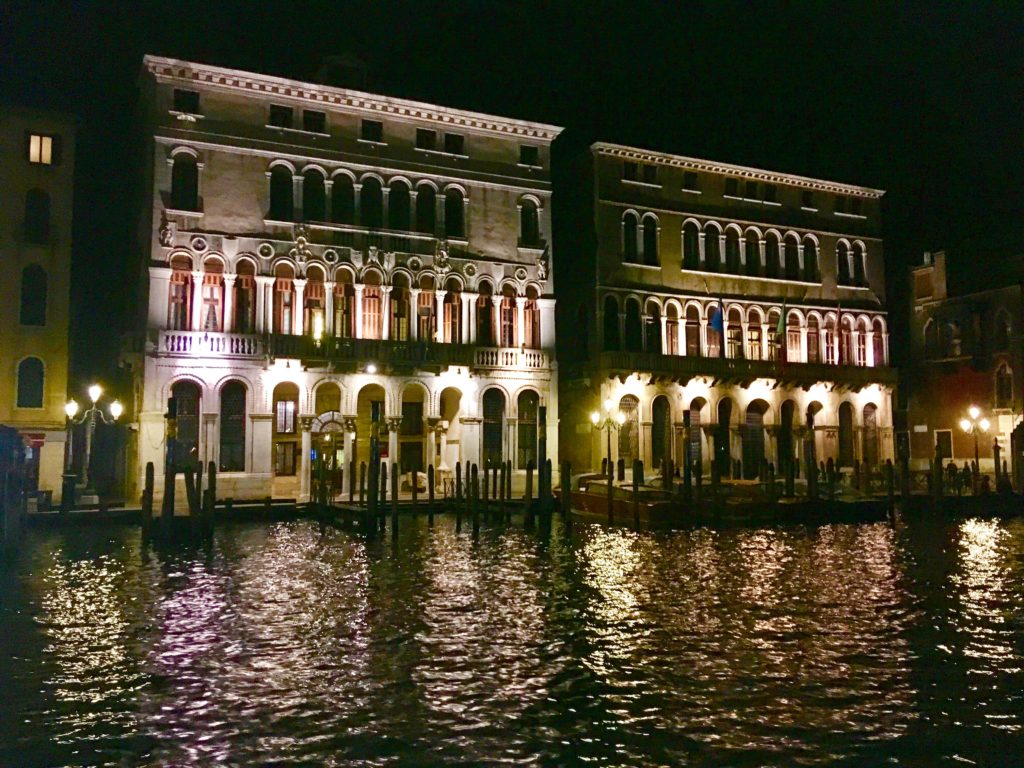 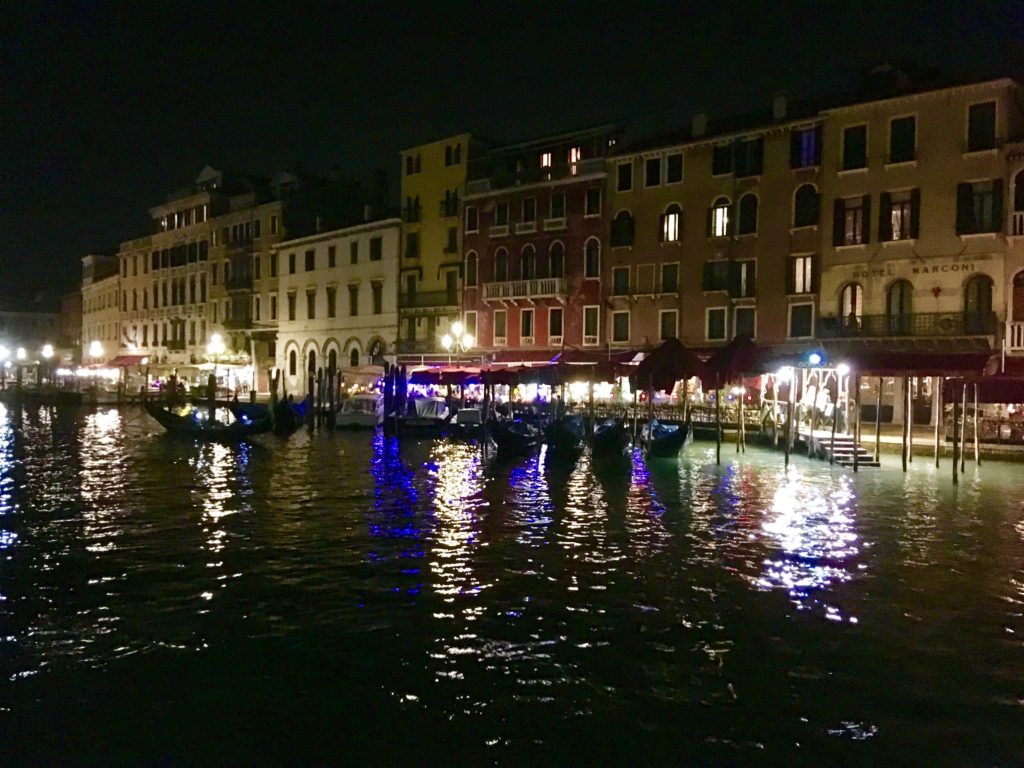 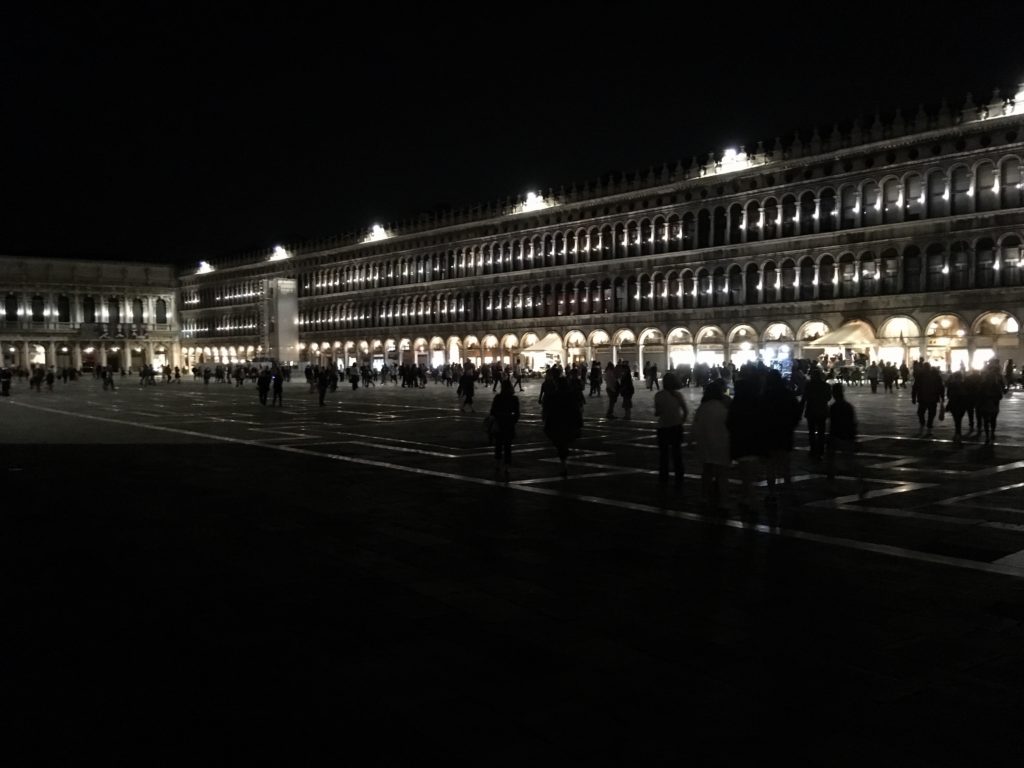 All around the square are al fresco eateries with small chamber ensembles outside on tiny stages playing popular classics. Personally the choice of music was not my cup of tea. tunes from Dr. Zhivago, Zorba the Greek, New York New York and Abba hits. There’s a wealth of Venetian music and some of the most iconic Baroque pieces were composed right here. But that is the ugly face of tourism. A musical rash in the most stunningly beautiful architectural jewels in the world. I know I am a tourist but the best part of visiting at night is that the day trippers who throng the square during the day have all left and this allowed me to appreciate the sheer size of this space. The Basilica and all the surrounding architecture is so sculpted and busy that you just can’t take it all in. 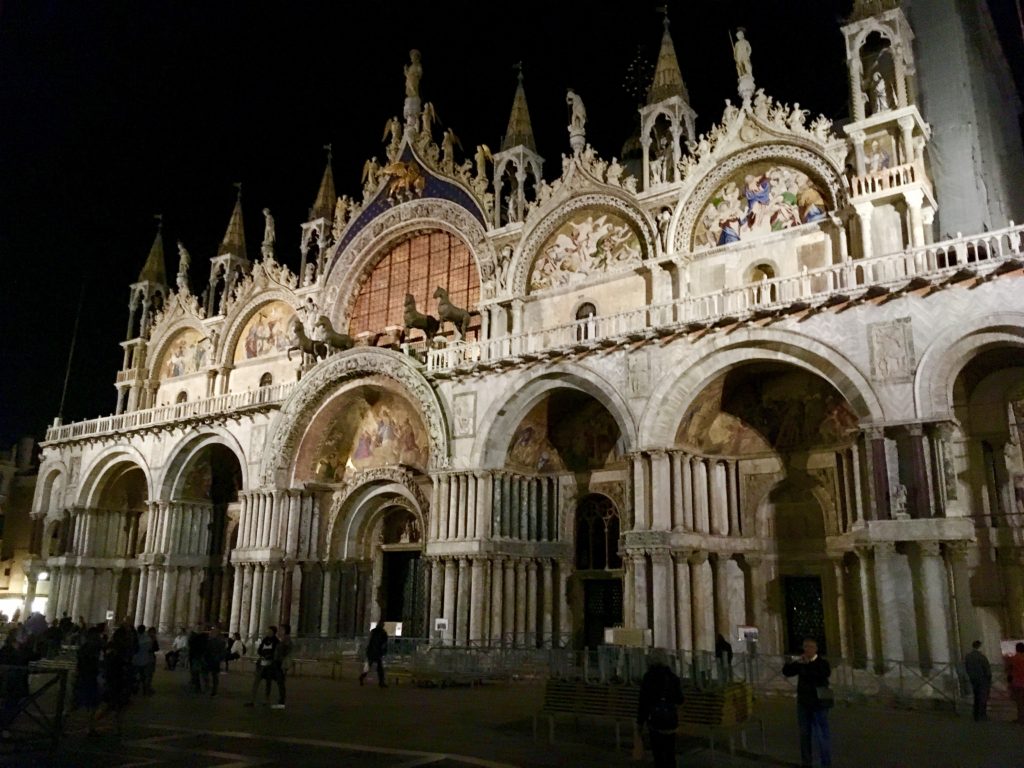 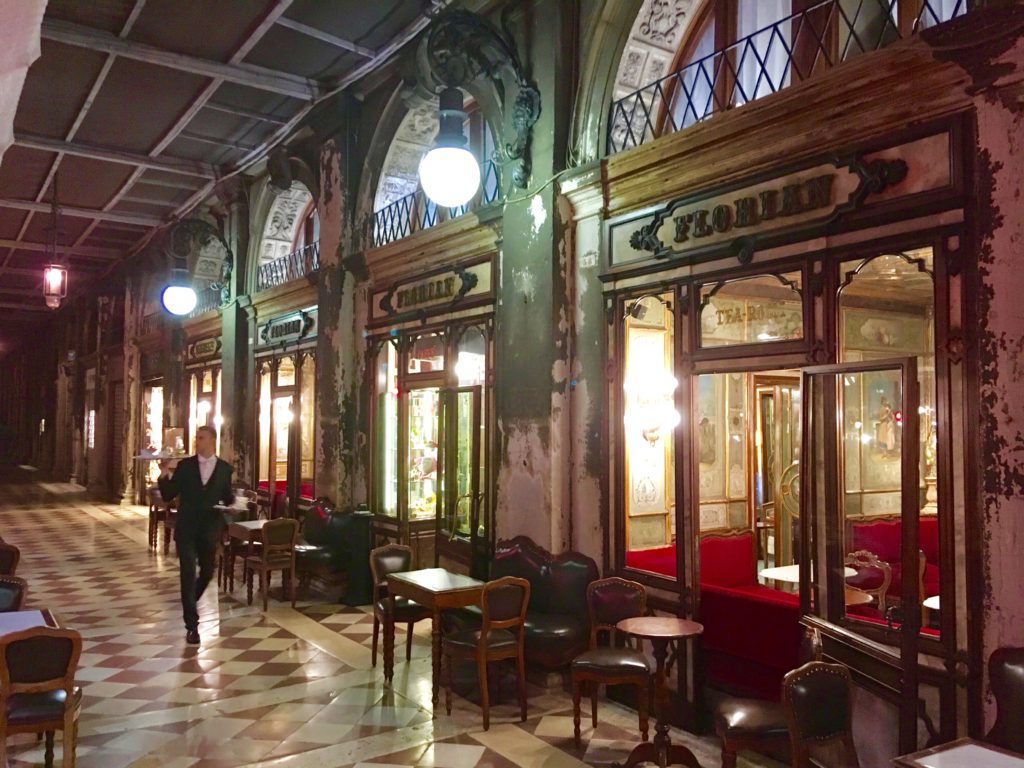 Along of edge of the Piazza there sits what is described as the world’s oldest caffè. Caffè Florian started serving in 1720 and most of the worlds greatest artist and philosophers have chewed over their ideas alongside the amazing food. The caffè stretches along many sections and each room is wall to ceiling ‘verre eglomisé’. Rear painted and guided mirrors and glass covered art. 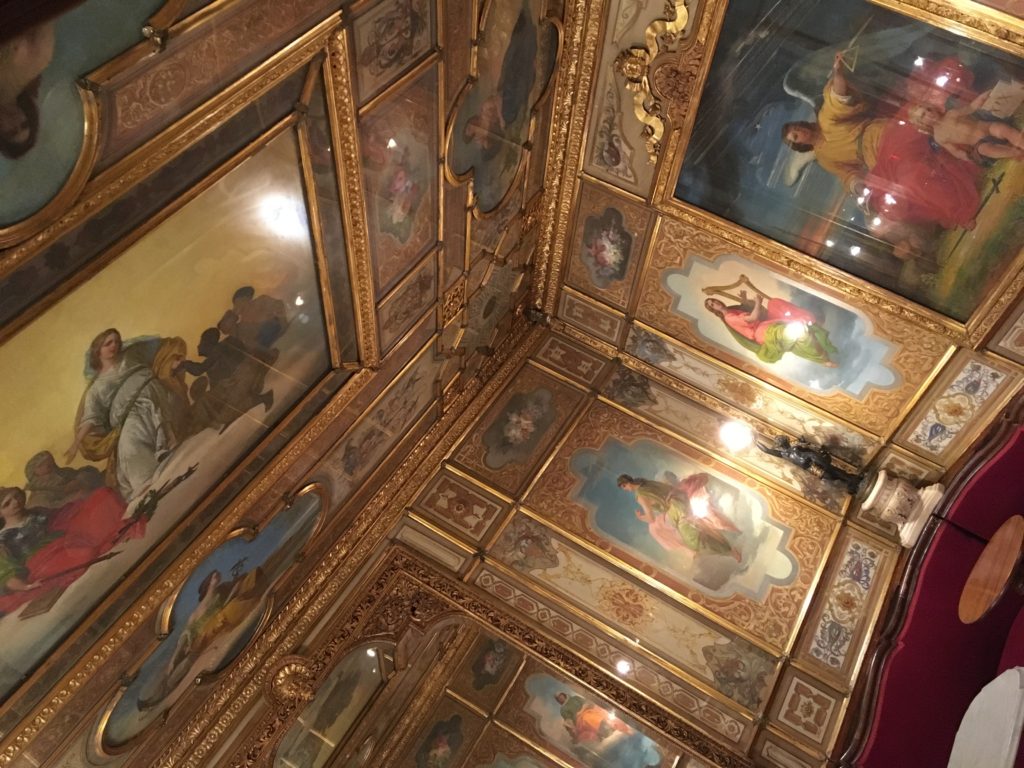 With all the guests outside listening to the pianist I was privileged to have an entire tea room to myself to indulge in the splendour of their menu. Mmm… sweet treats. 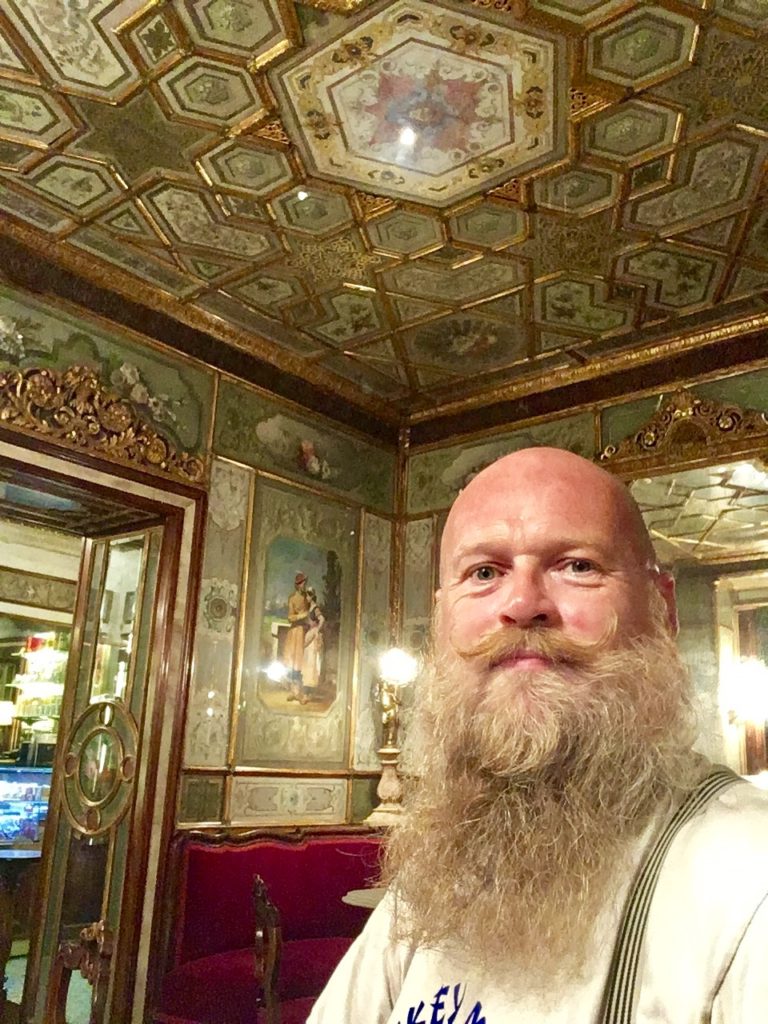 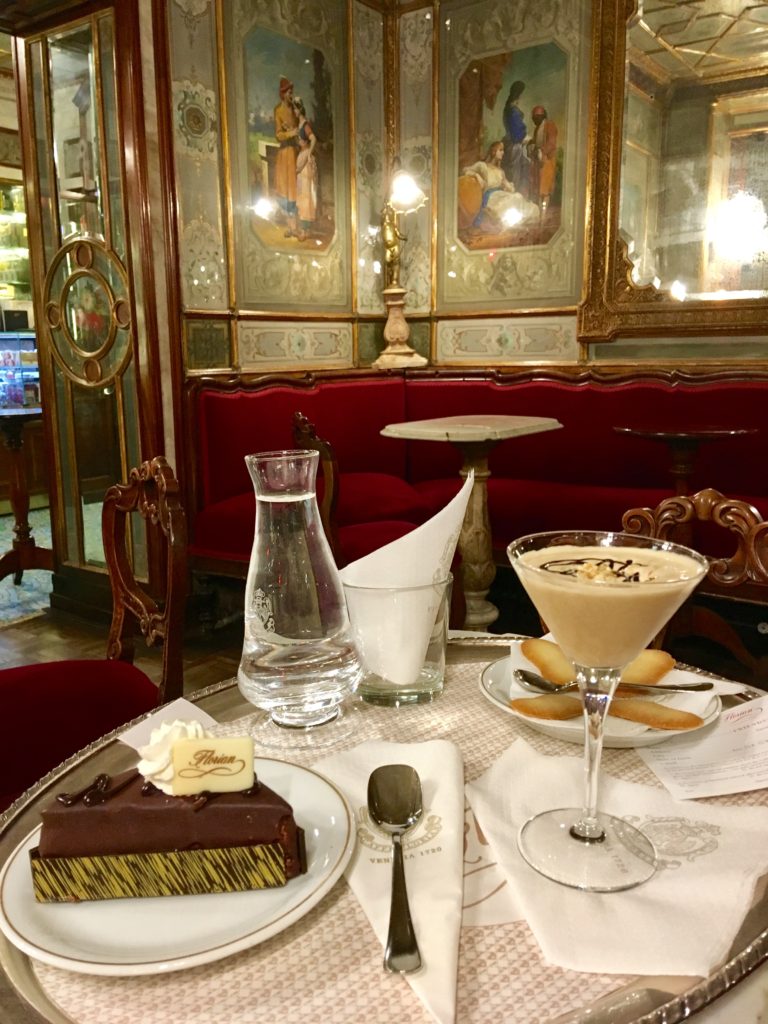 With my belly fully I set of to stroll the canals and eventually stumbled upon the very famous Rialto Bridge from where I hopped onto the water bus back to my hotel. 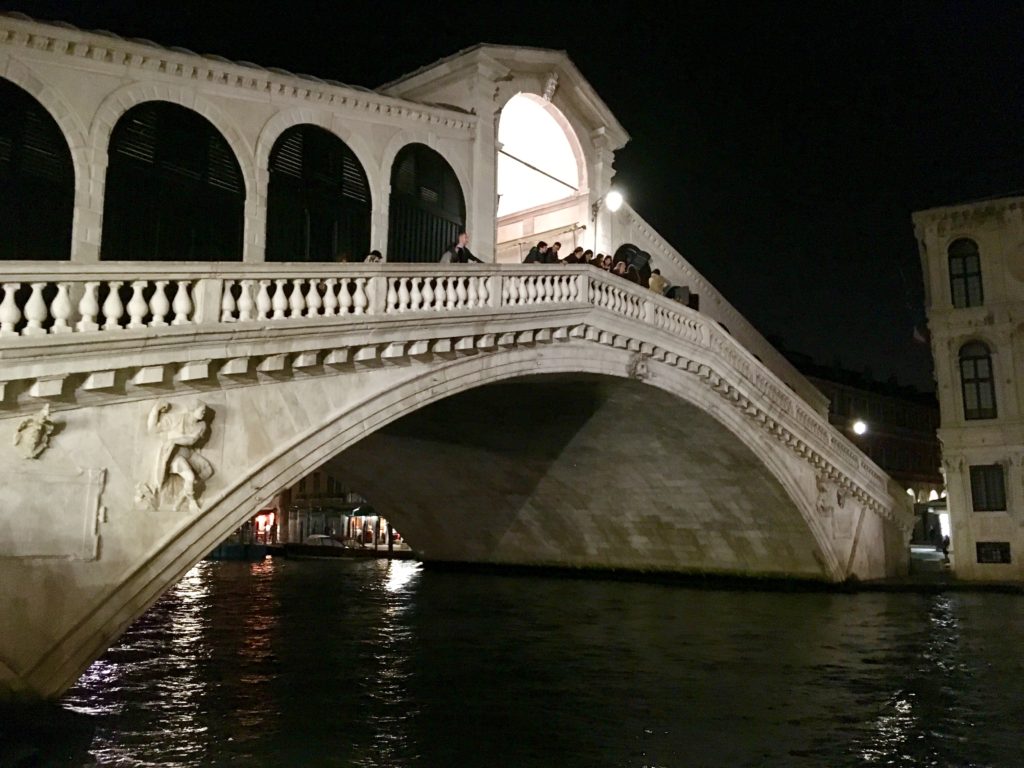