Post breakfast and a short cab ride up the hill from my hotel I arrive at the Inca ruins of Sacsayhuamán. A citadel on the northern outskirts of Cusco. The earliest parts were built by the Killke culture in about 1100CE. They occupied the area from about 900CE but it was expanded upon by the Inca Empire in the 13th century. 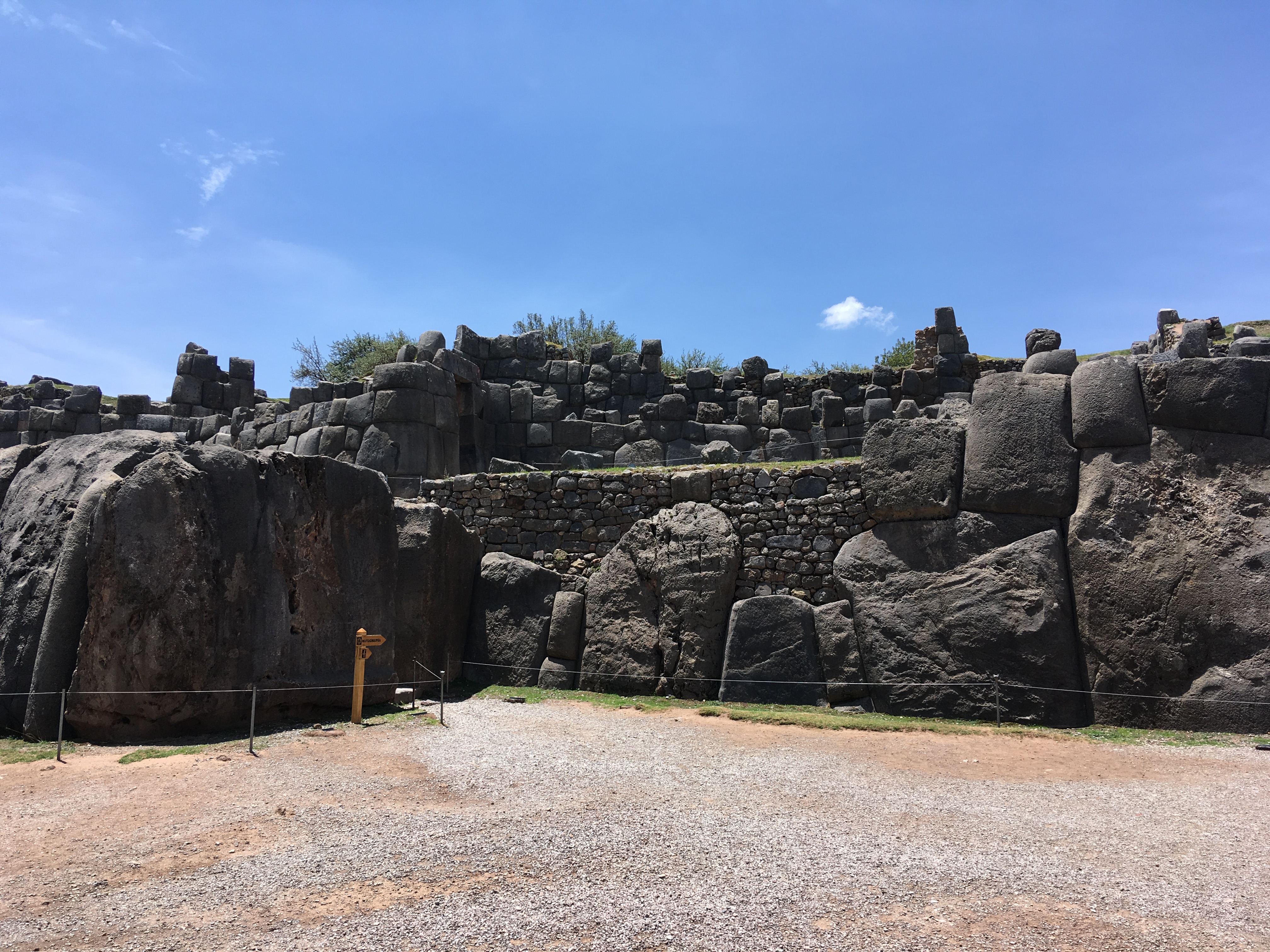 The size of the blocks up here is immense. It is also impressive that no mortar is need to hold them together. Instead lumps and matching holes allow the rocks to grip each other. 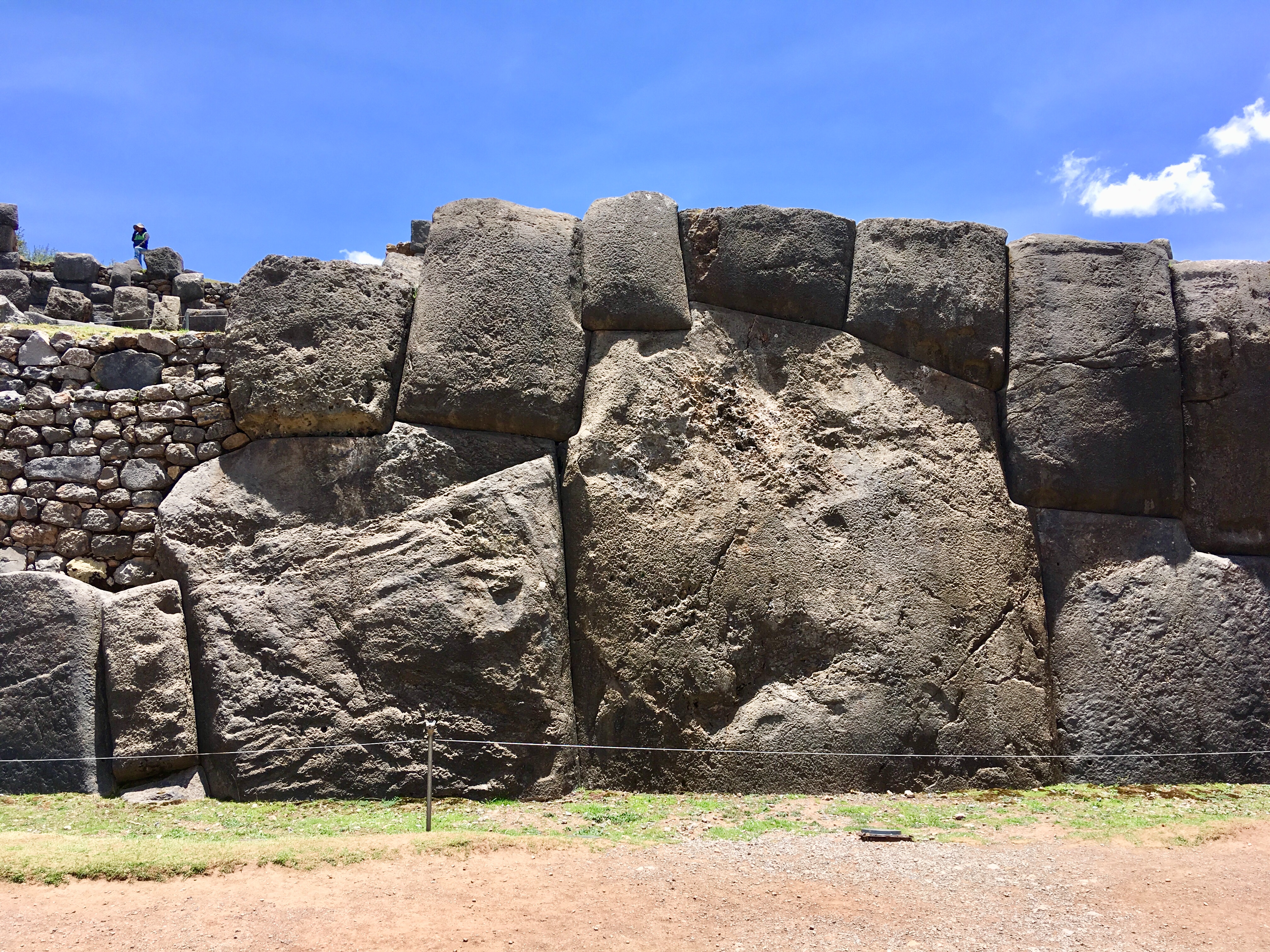 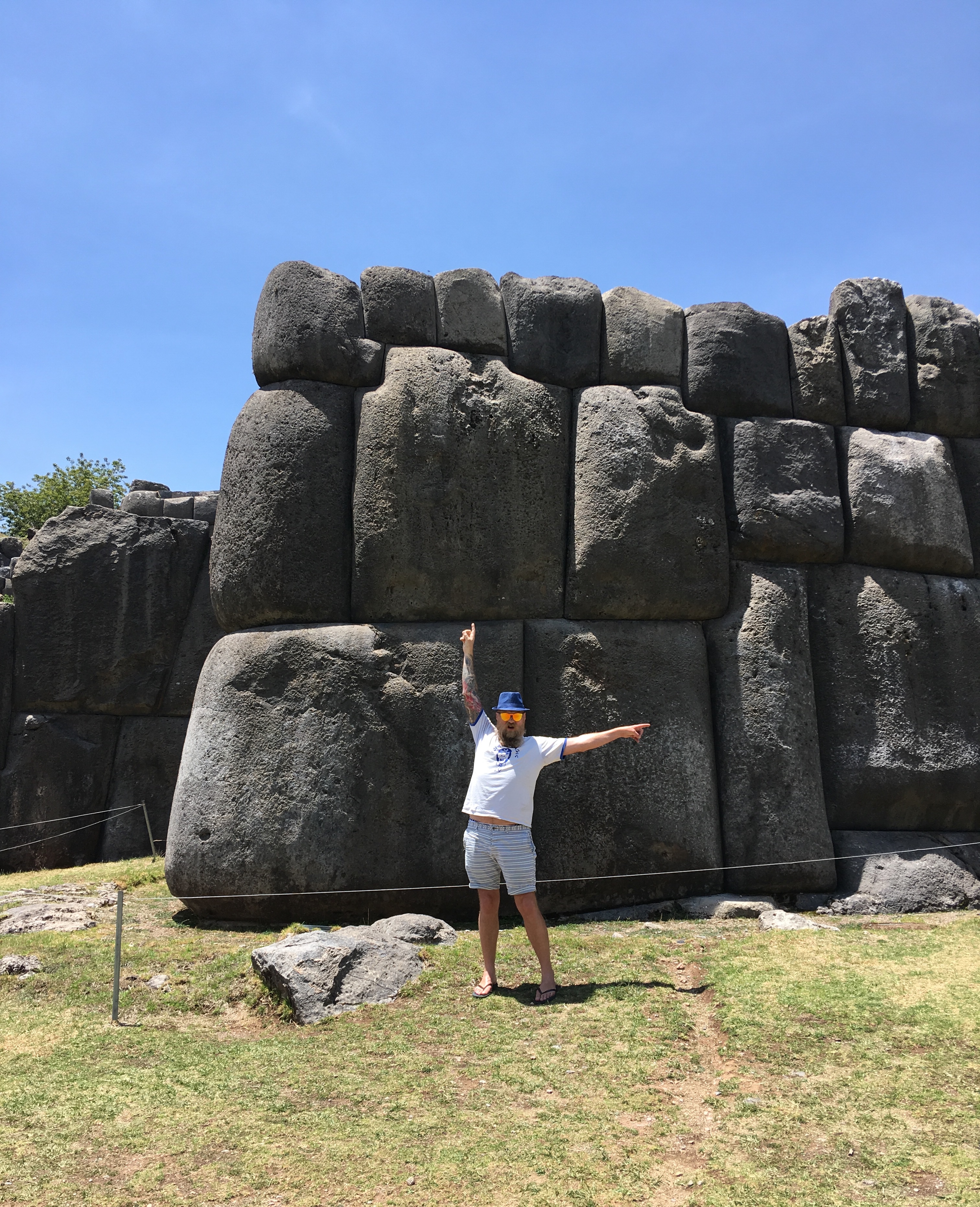 Here I see llamas in their natural habitat munching on grass rather than dressed up and being led around the town by costumed locals posing for tourist photos. 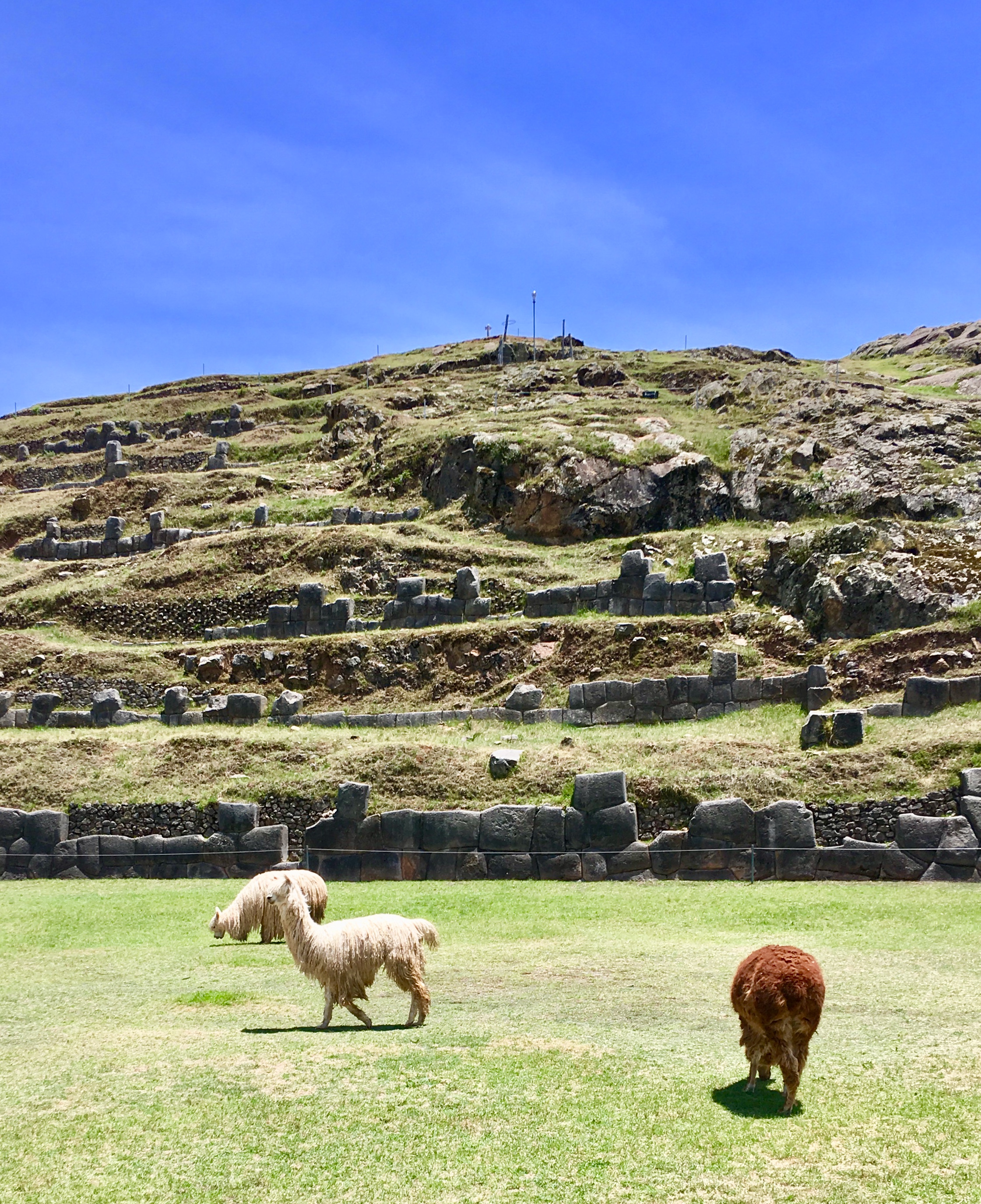 The complex is vast and made up of two different sections. One half is all stone blocks and steps. The temple of the sun. It is believe that this was a religious complex above Qosqo (original pronunciation prior to the Spanish calling it Cusco. All Incan words are written using the Spanish pronunciation and alphabet) the Incan capital. 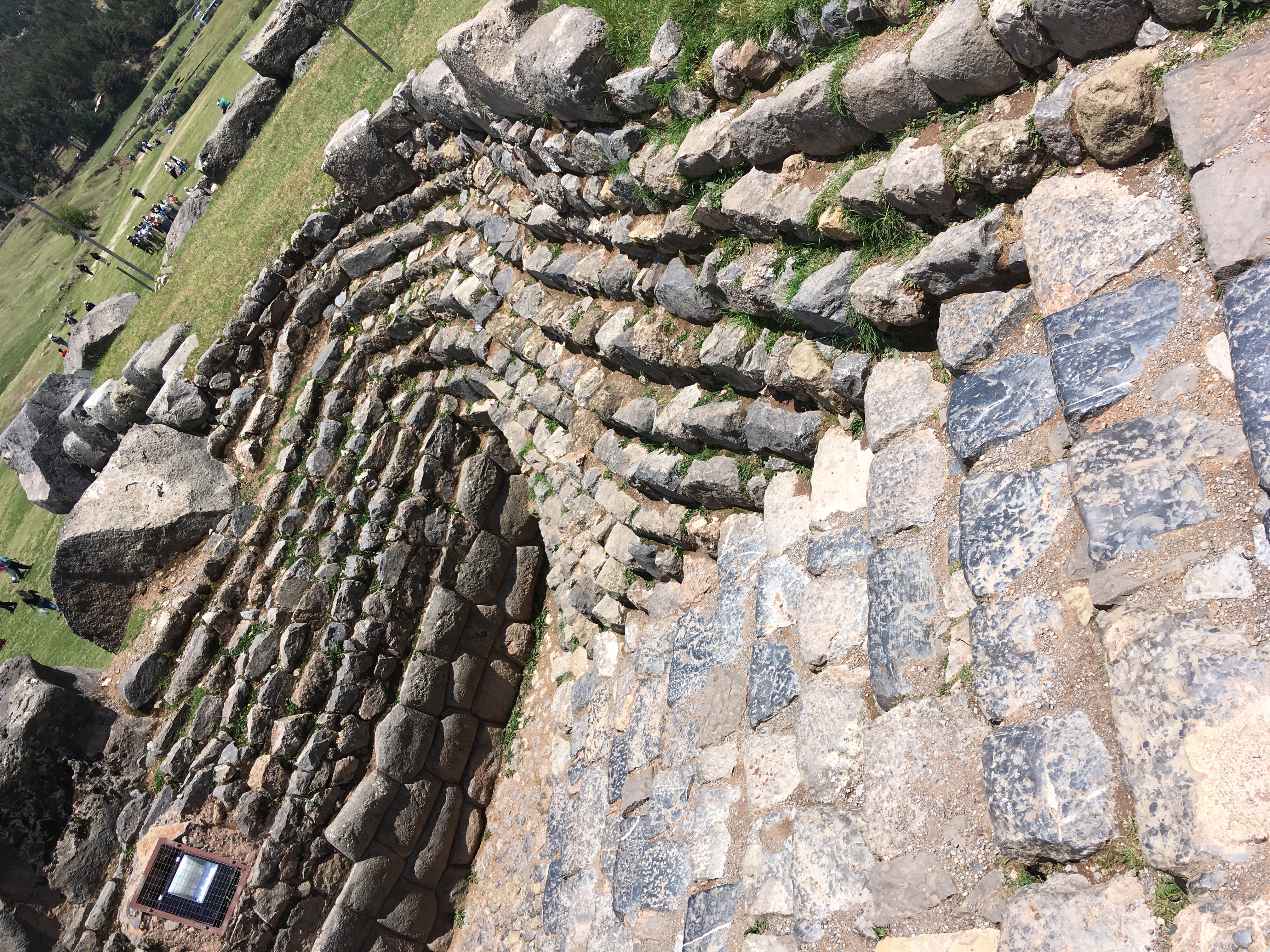 The other side is curved and created around the organic shapes of the natural rocks that form the hill. This organic type of building is very common in Incan architecture. The rocks are rippling curves of smooth stone that erupt like waves from the ground. 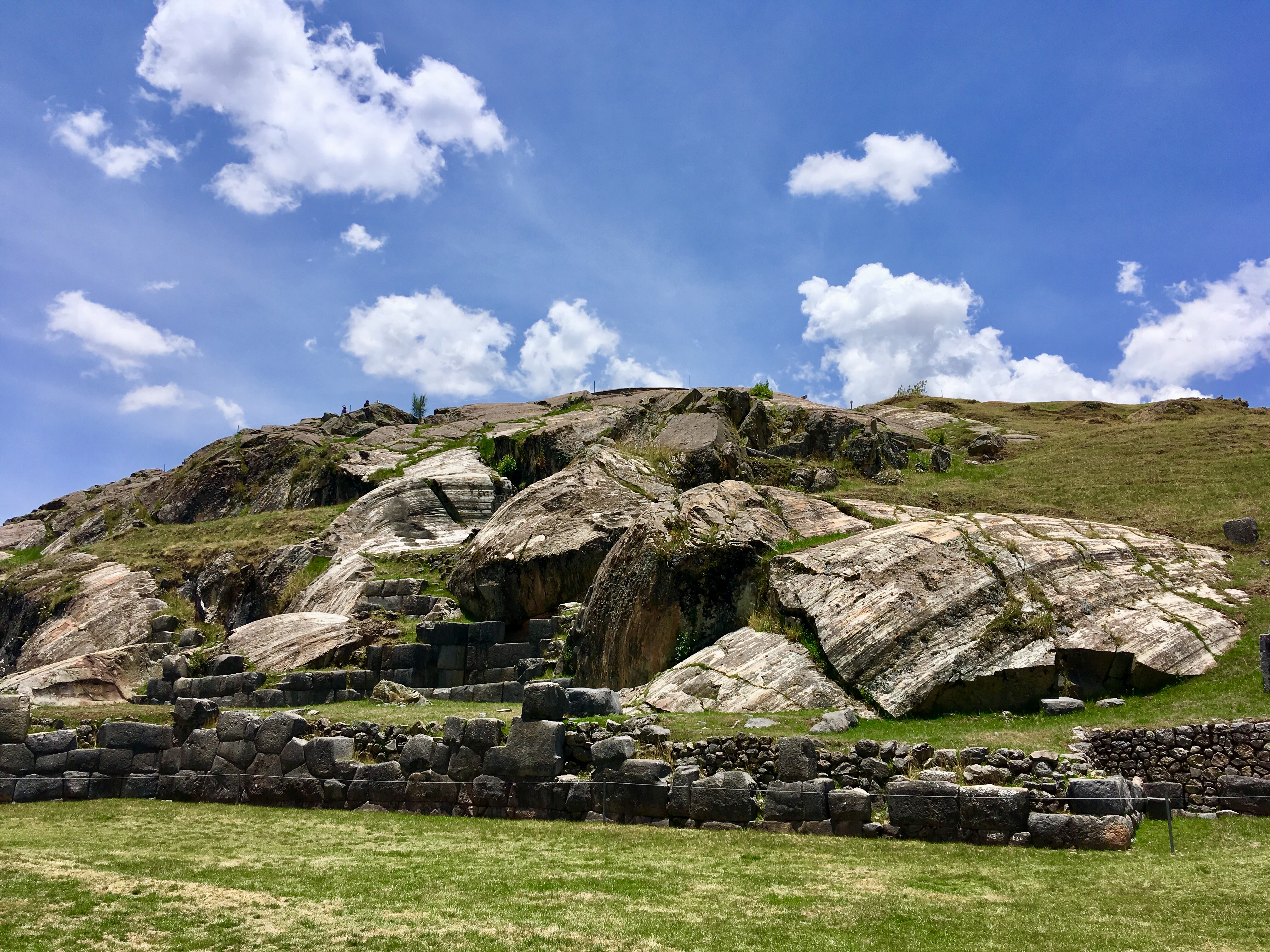 I must say that this was at a higher altitude than the town and hotel and I did have a few moments where my body went into a panic as it felt it didn’t have enough oxygen. Light headed I sat down in the glorious sun and sucked a coca sweet. 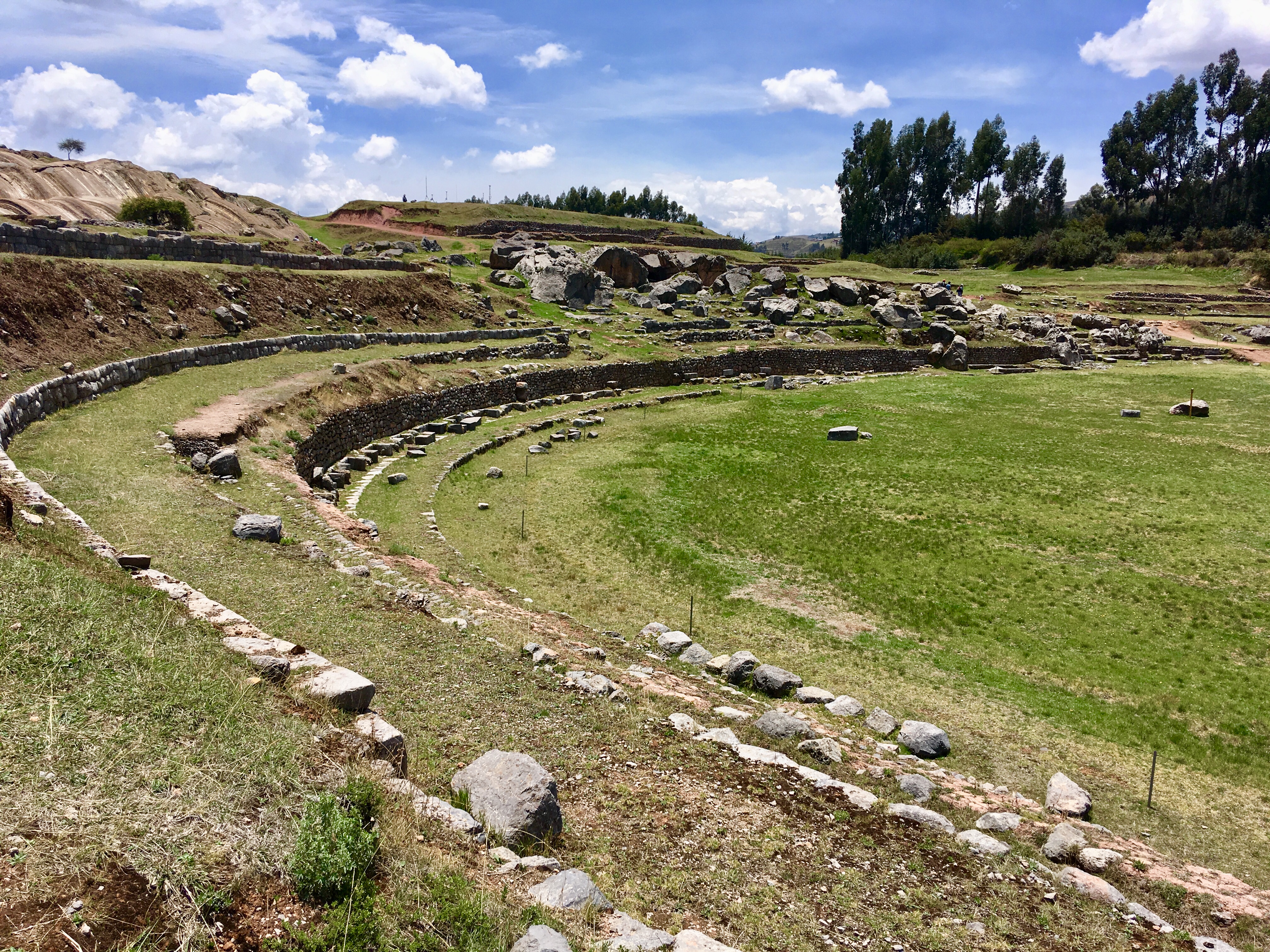 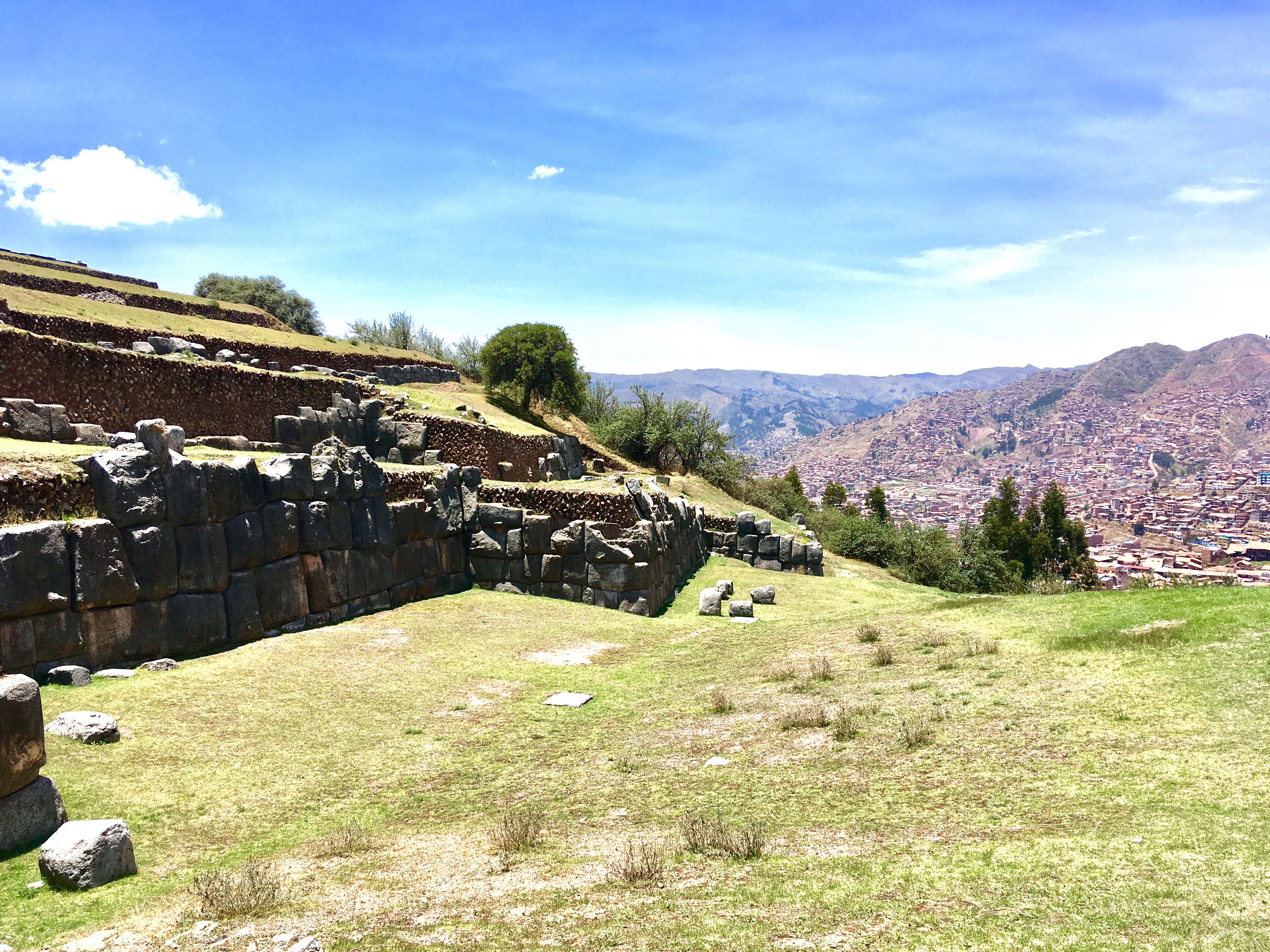 Warping the time line slightly I return to the latter half of my day yesterday. I couldn’t fit the second half of my day in the previous blog. Hence the change of clothing back to the red monkey shirt and blue shorts. I’m not a dirty bugger. I bought plenty of clothes and all are clean. I love the traffic lights and the street signs all over Cusco. The traffic lights have countdowns for cars and pedestrians and are quite large with their road and district information running almost across half the street, with the tangle of cables and wires. 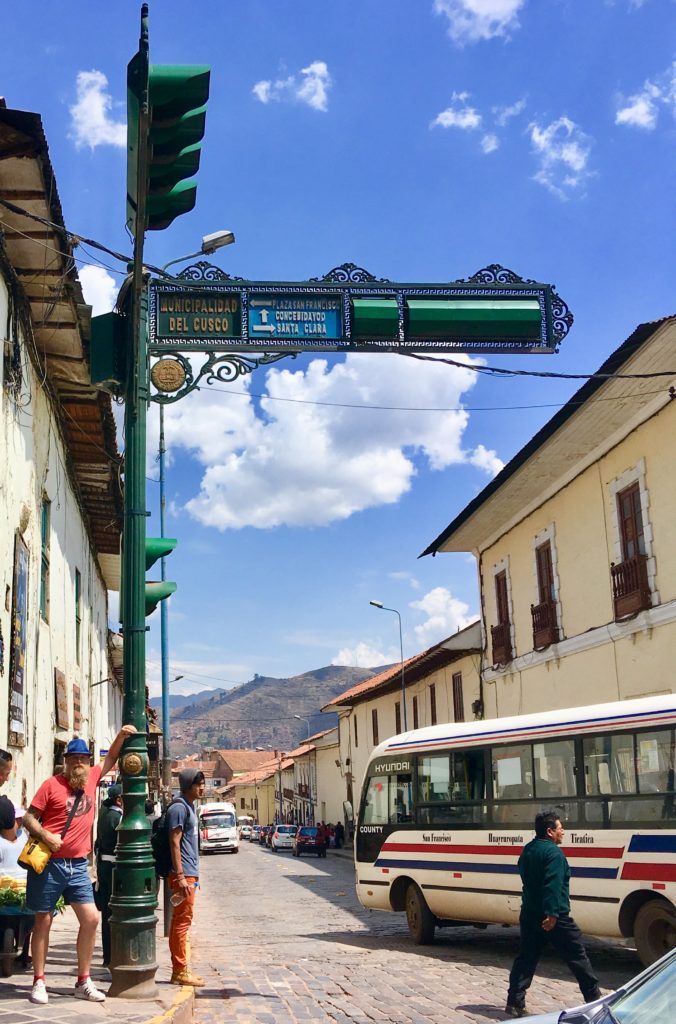 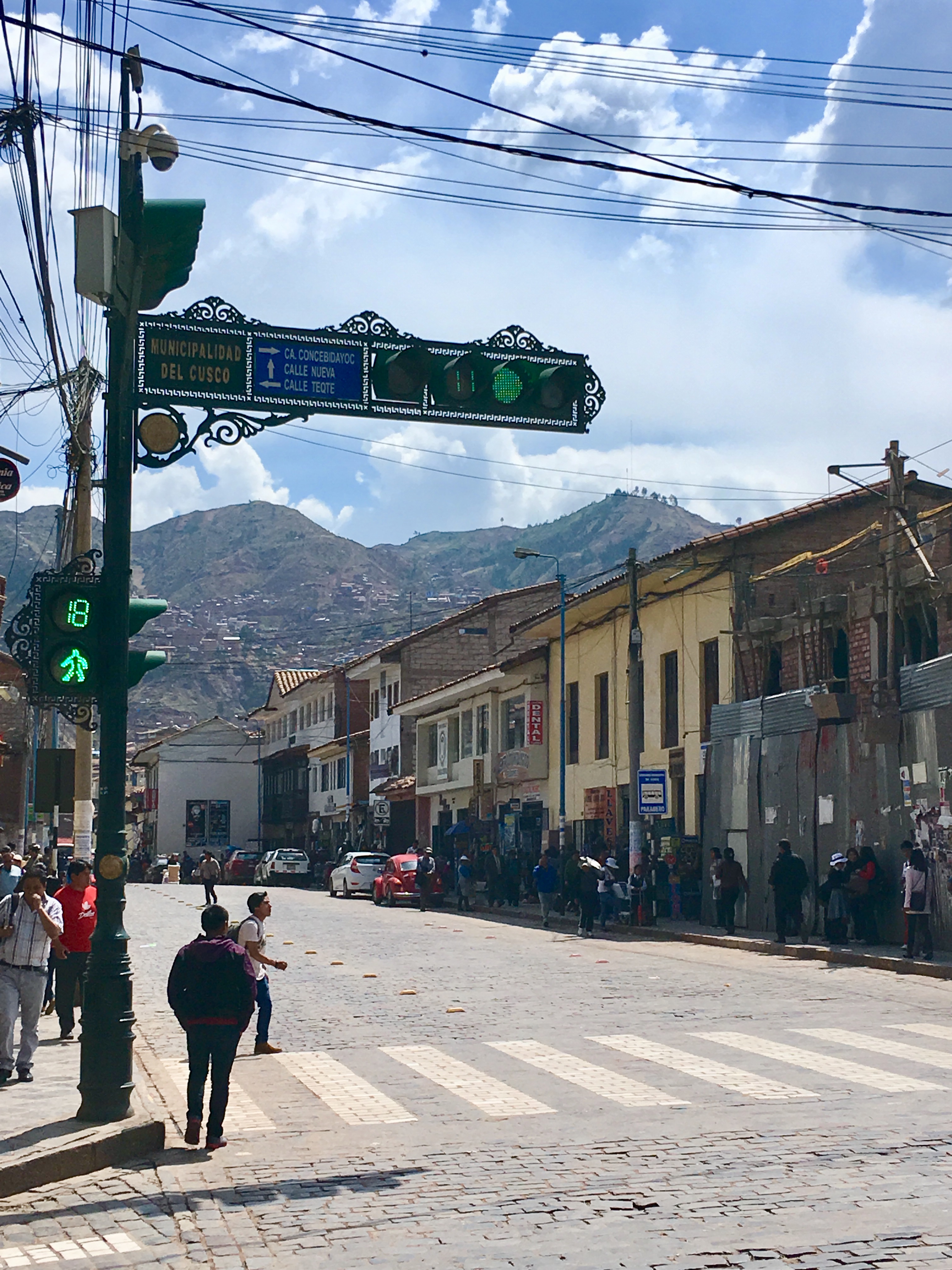 The street signs are as ornately edged but they also have flowers dripping from them. Quite the prettiest street signs I’ve ever seen. 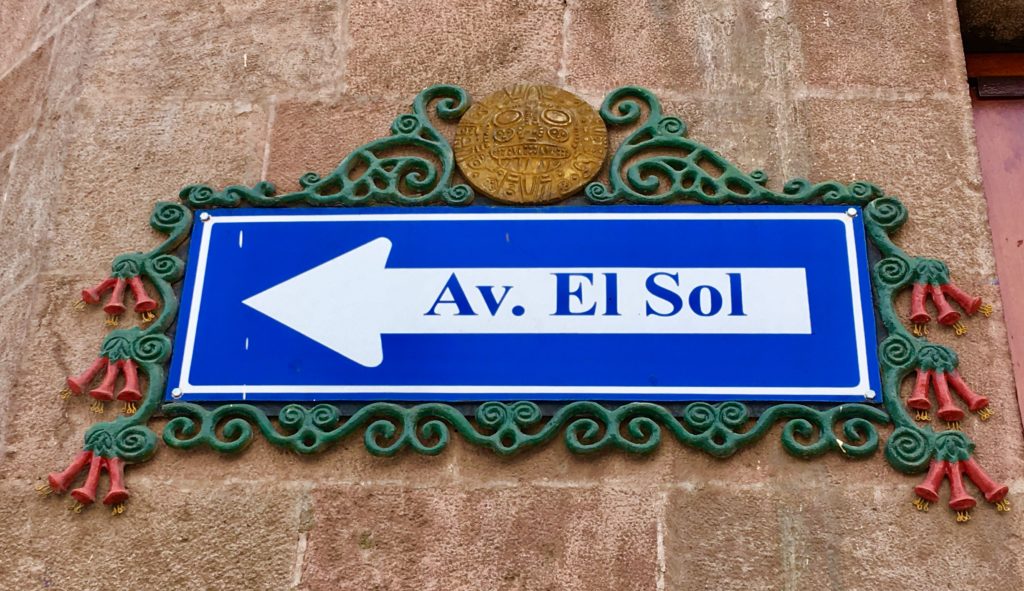 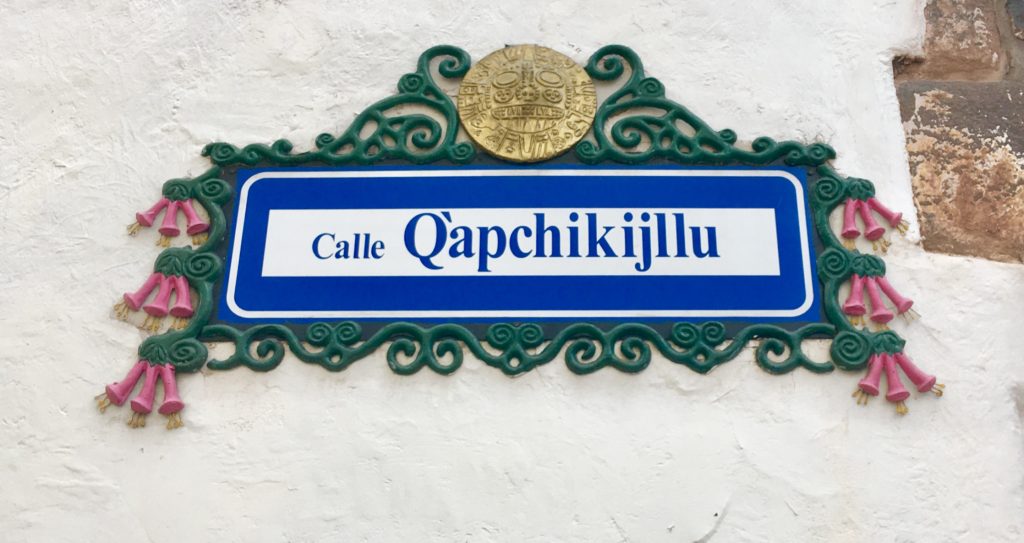 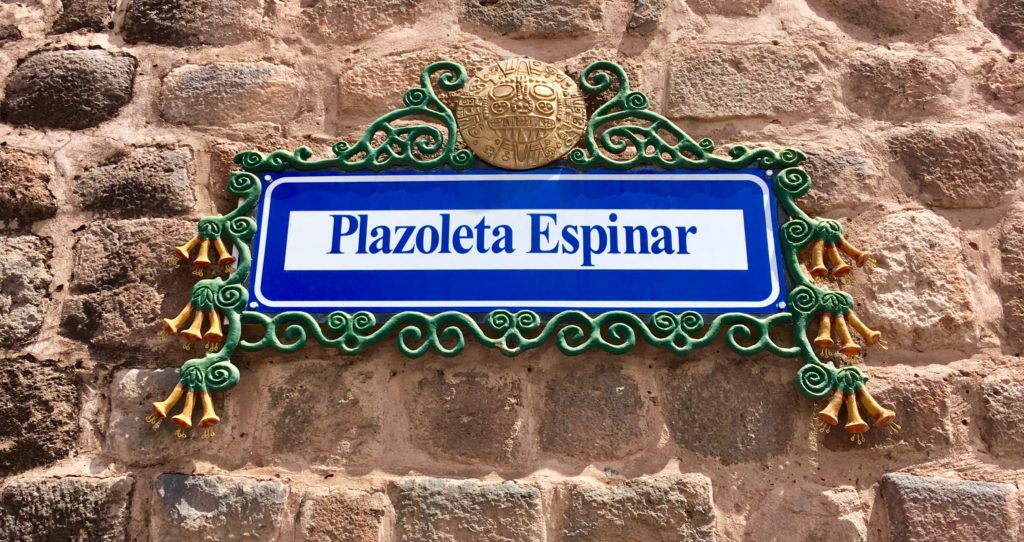 And so we come to the church and the convent of Santo Domingo which was built on the foundations of the Korikancha. The Inca temple of the sun. 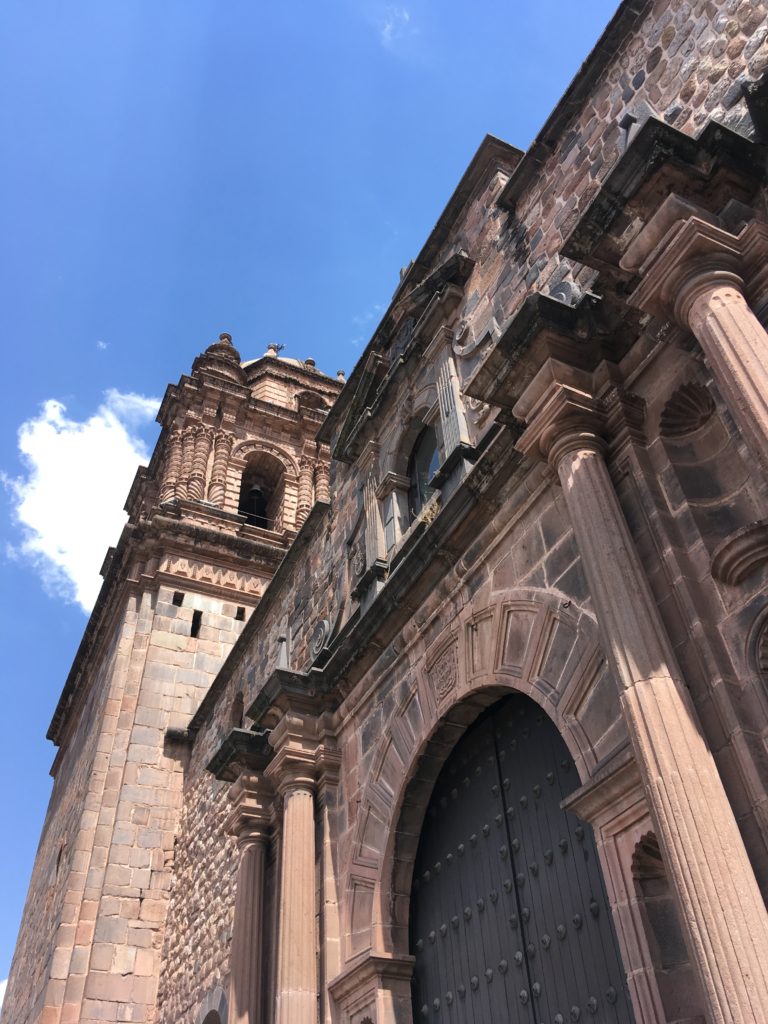 Even the crosses get dressed up to go to church. Well to stand outside the churches. High on one of the many hilltops overlooking Cusco there is a large cross that is also wrapped in fabric as it can be seen to billow and flap in the wind. 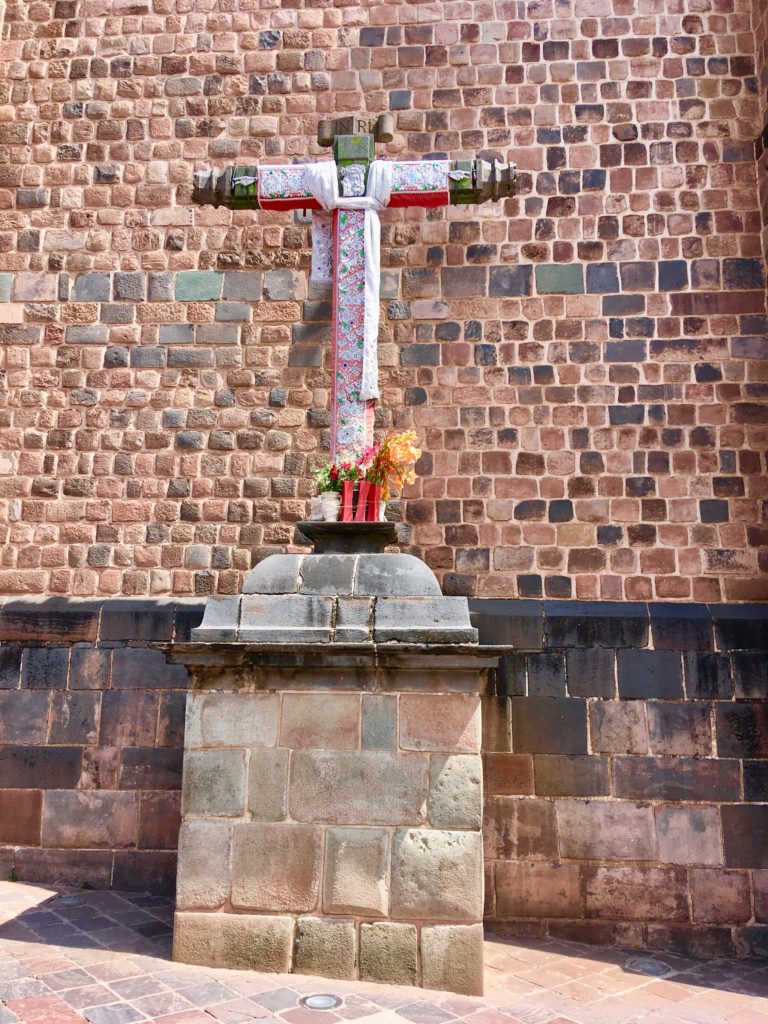 These Peruvian cherubs above the arches along the knave of the church are particularly striking. Their faces are so photo realistic that they look like local children who might have died in childhood. These startlingly lifelike faces are alongside more cartoon-like,  bloodied images of Jesus. 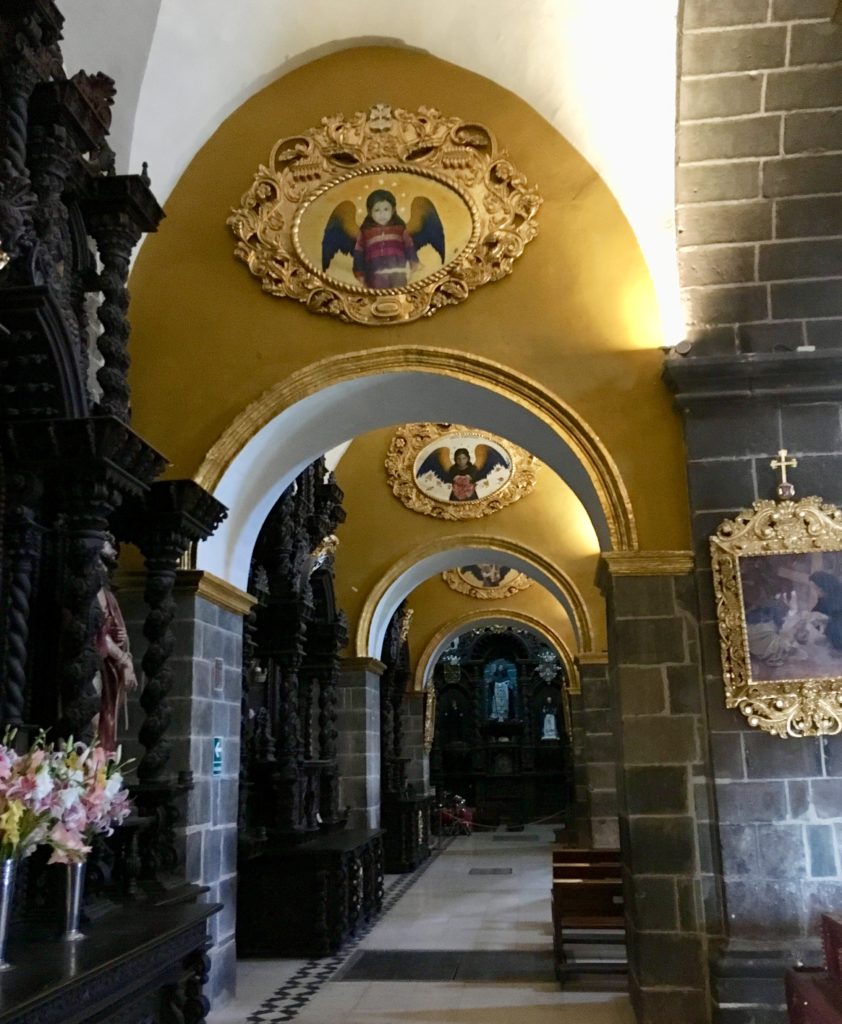 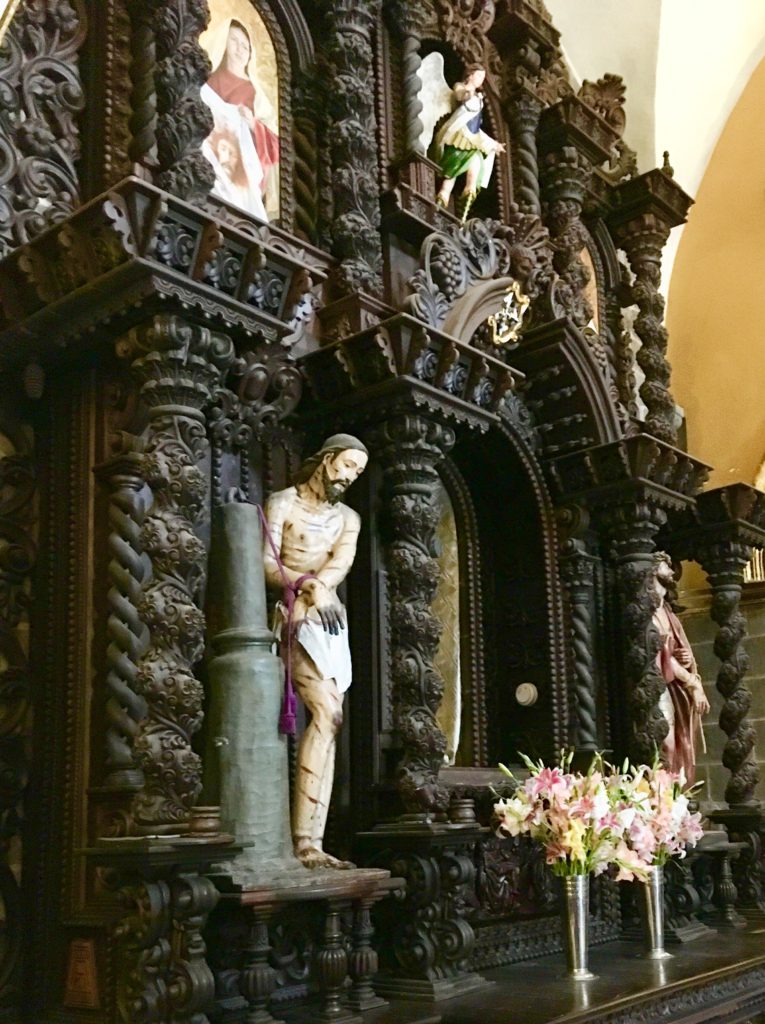 On entering the complex there is a beautiful painted ceiling. Seeing the colours and details is truly amazing. This is the entrance to the old temple of the sun. 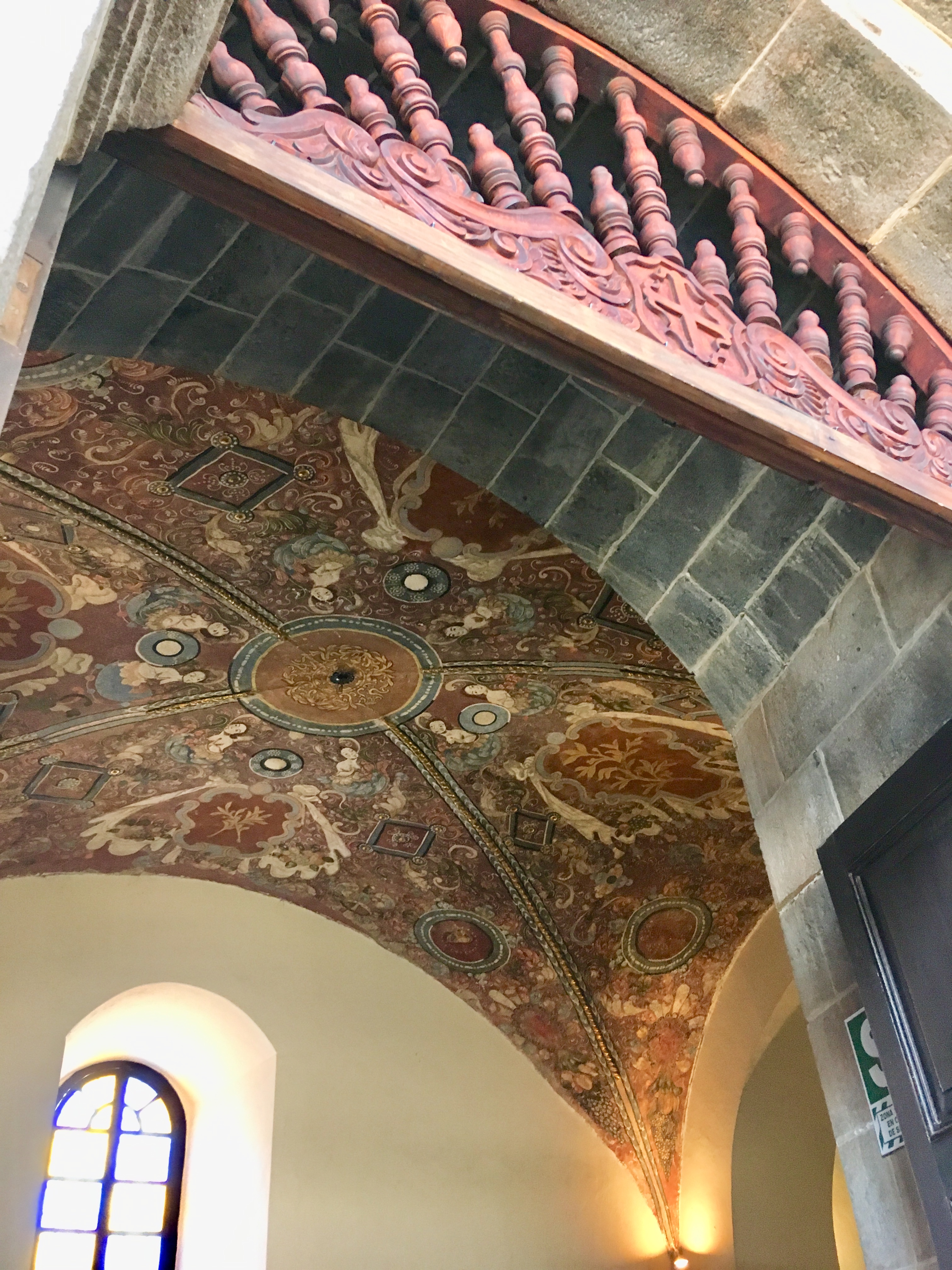 Behind the church is the cloisters. Four sides of two story arches peppered with pink flowers cascading from the upper floor. 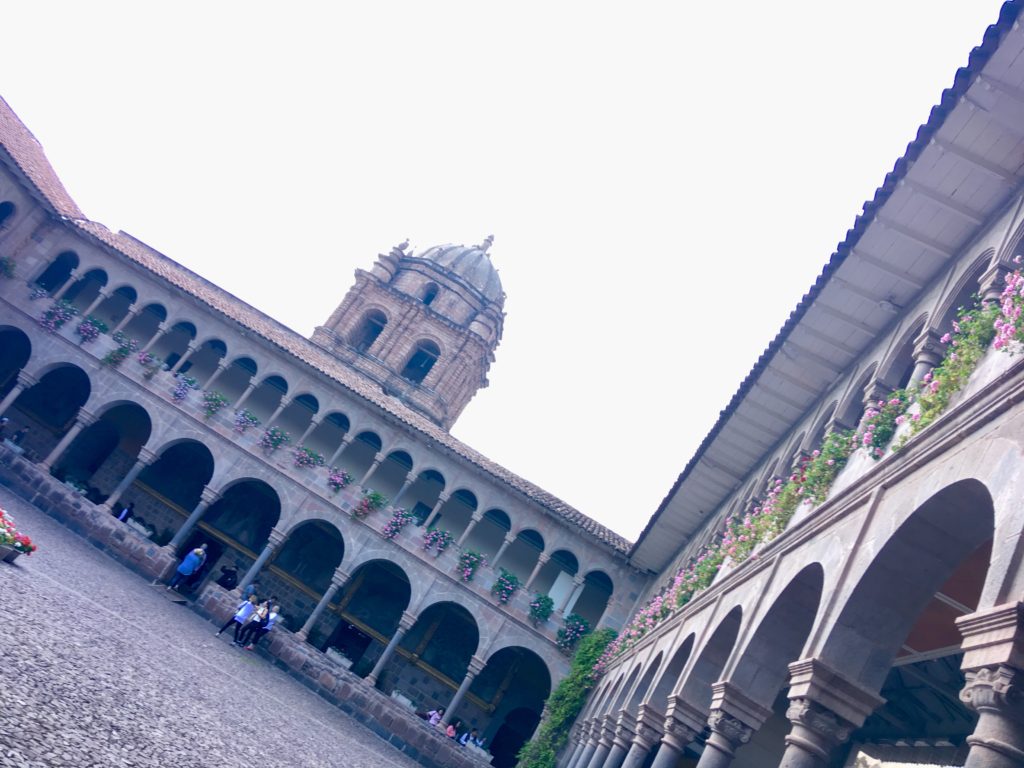 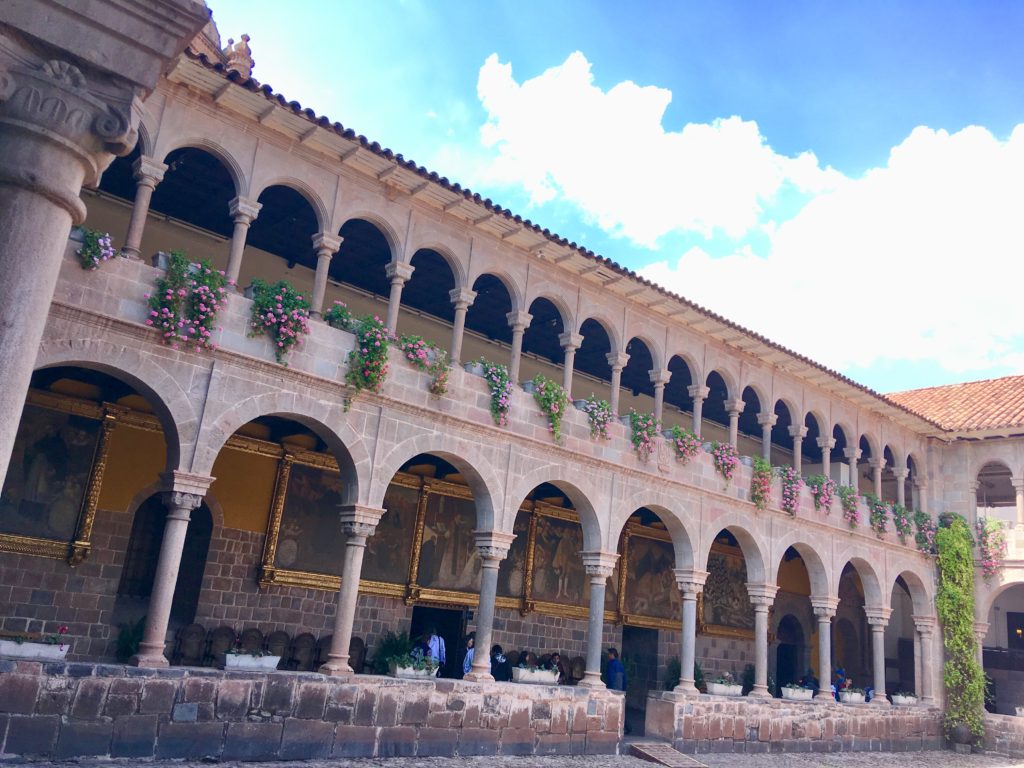 I get that the Catholic church often tore down sacred buildings of earlier civilisations to build churches over them. I even understand that the early civilisations left ready supplies of stone and marble but I still find this fact quite distressing. However here many of the features that couldn’t be removed, remain. There are rooms and chambers along the edges of the cloisters that can still be viewed. So the Inca temple is remarkably well preserved by the churches presence. 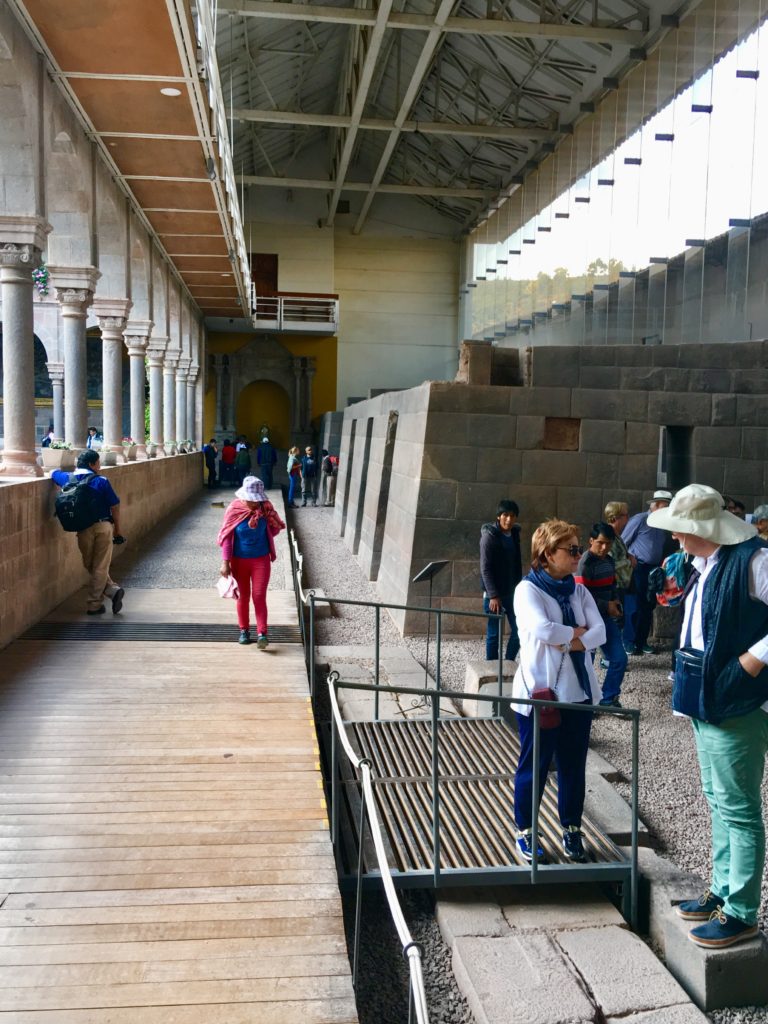 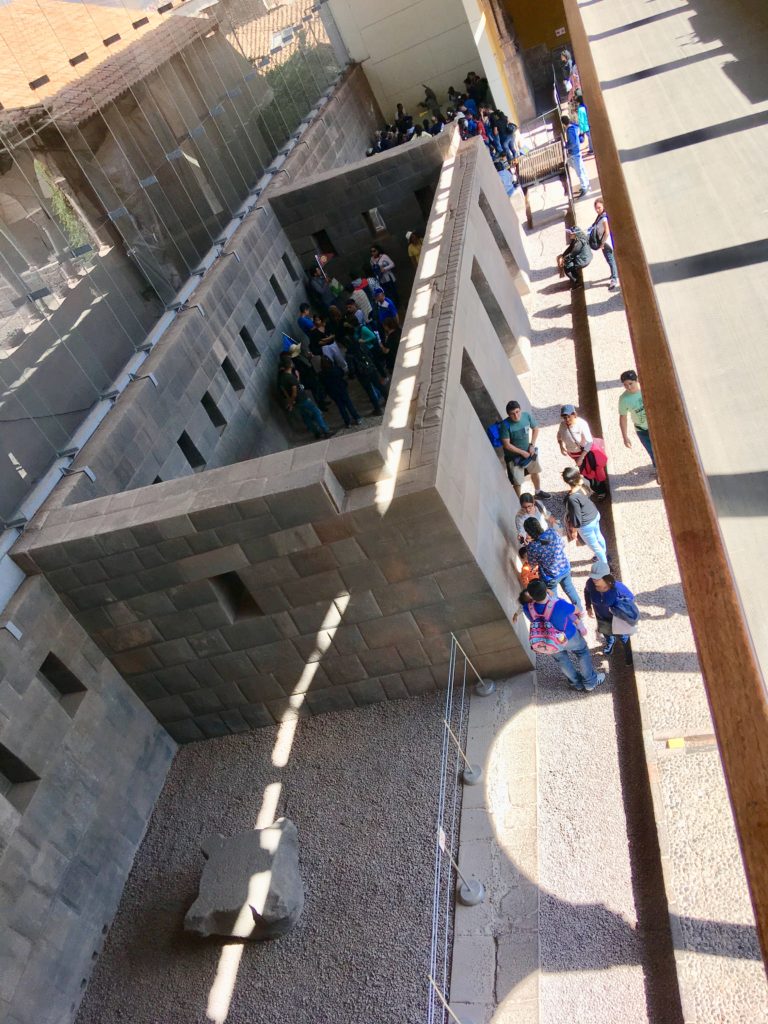 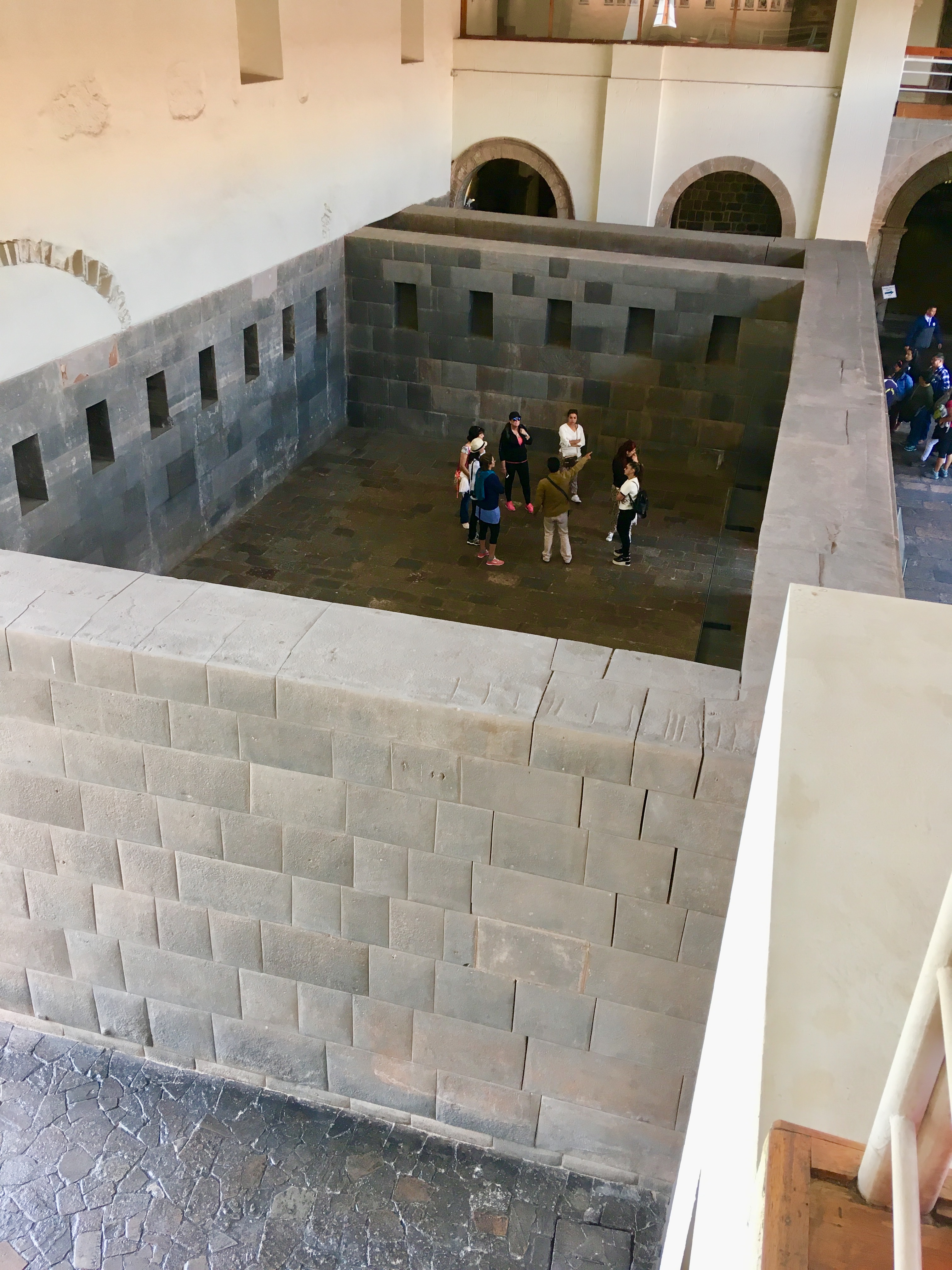 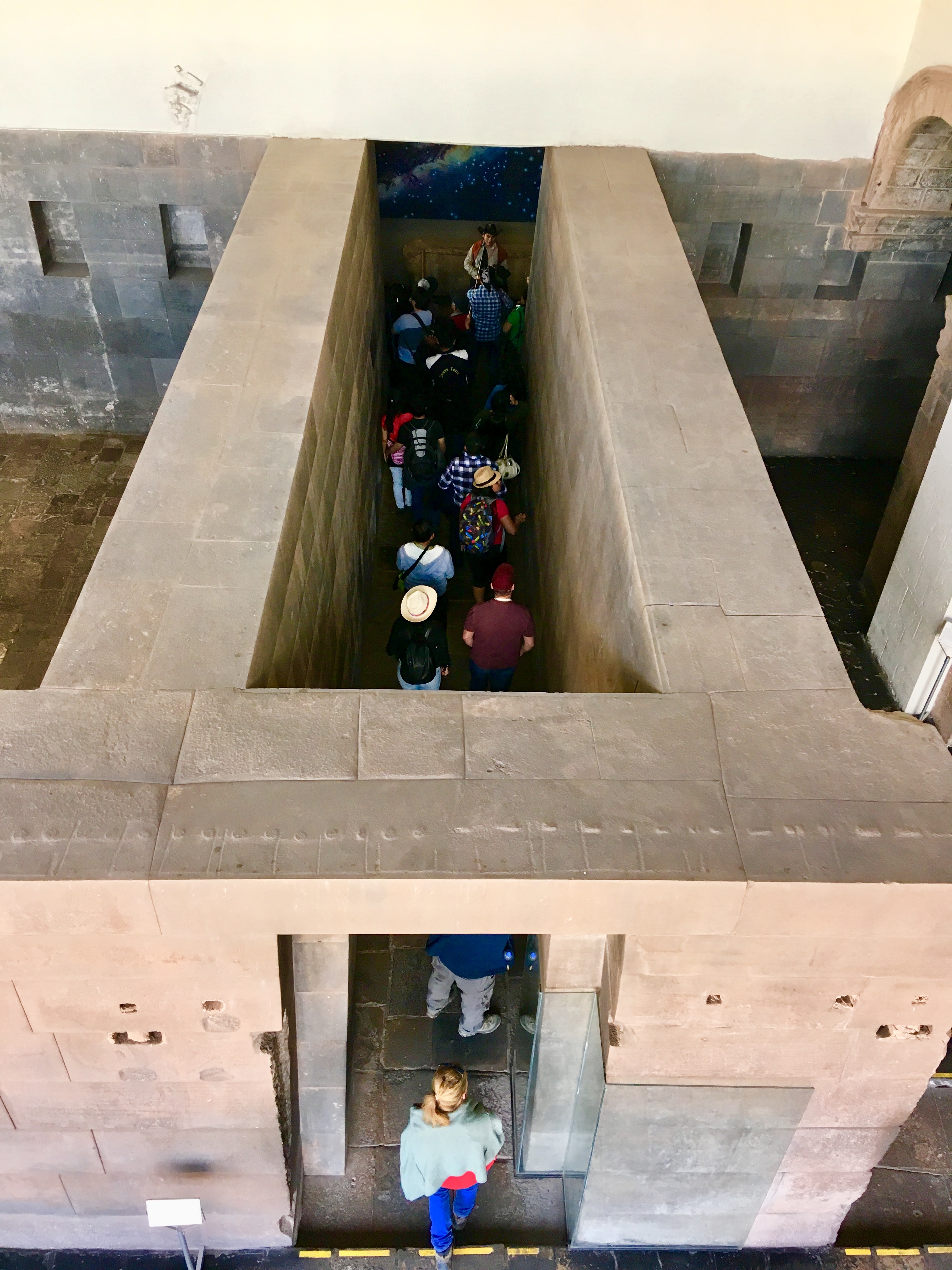 Outside the rear of the church are the giant thick walls that were part of the sacred sun temple. The Incas were good at building windows through which the sun would perfectly align with the summer and winter solstices. 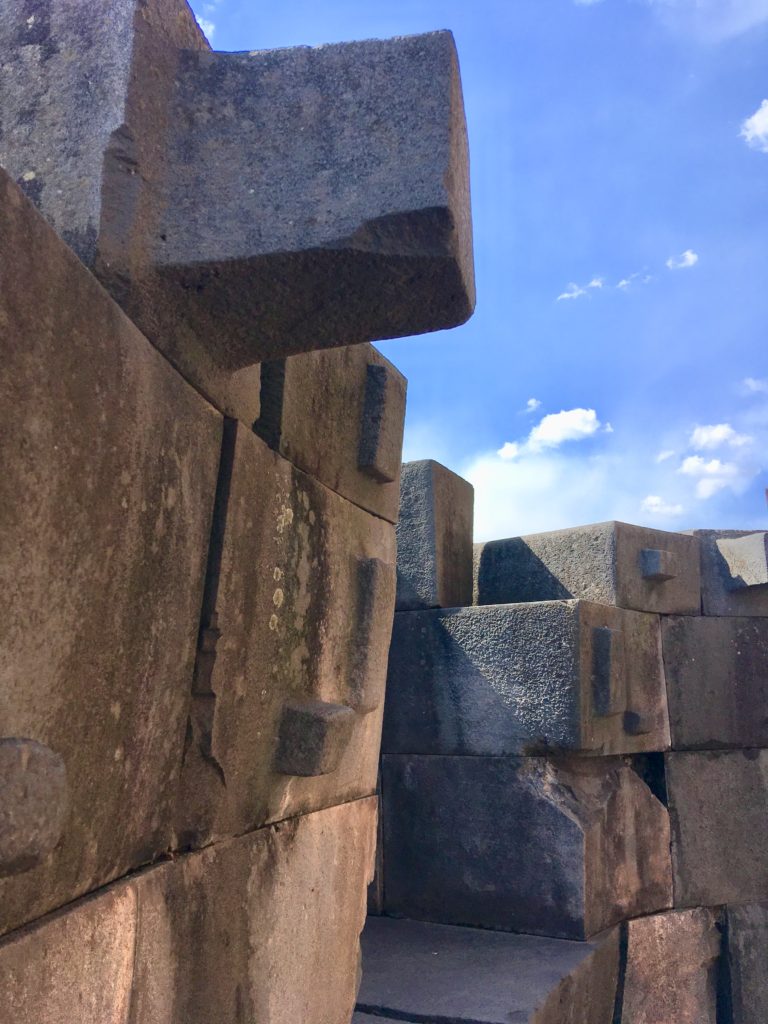 Much of this has been destroyed slightly to build the church but the scale of the walls is evident. Avenue El Sol runs up from the bottom of the gardens behind the once temple complex. 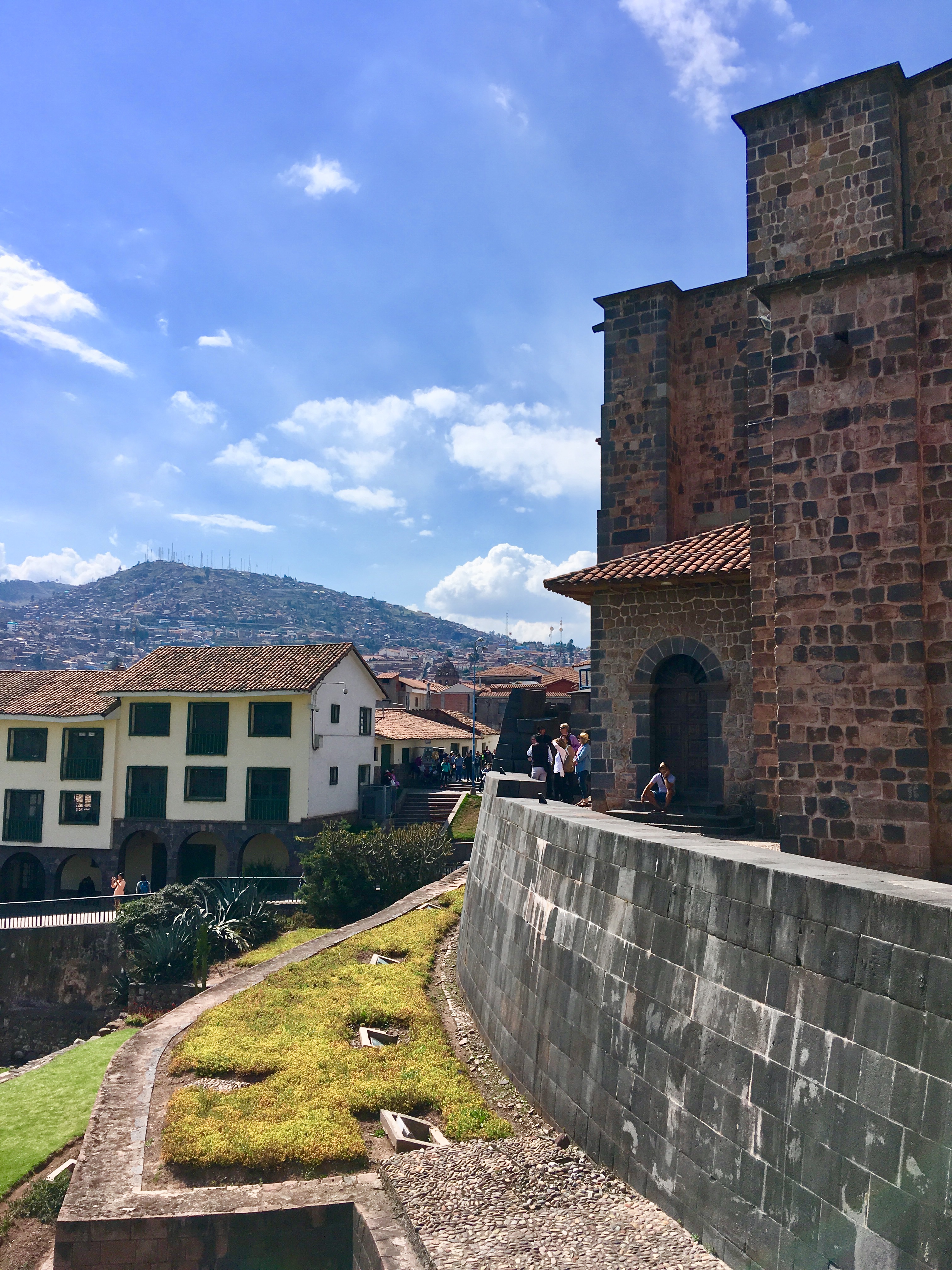 Rather too late I am shocked when I pass by a sign and discover the camera rules here. 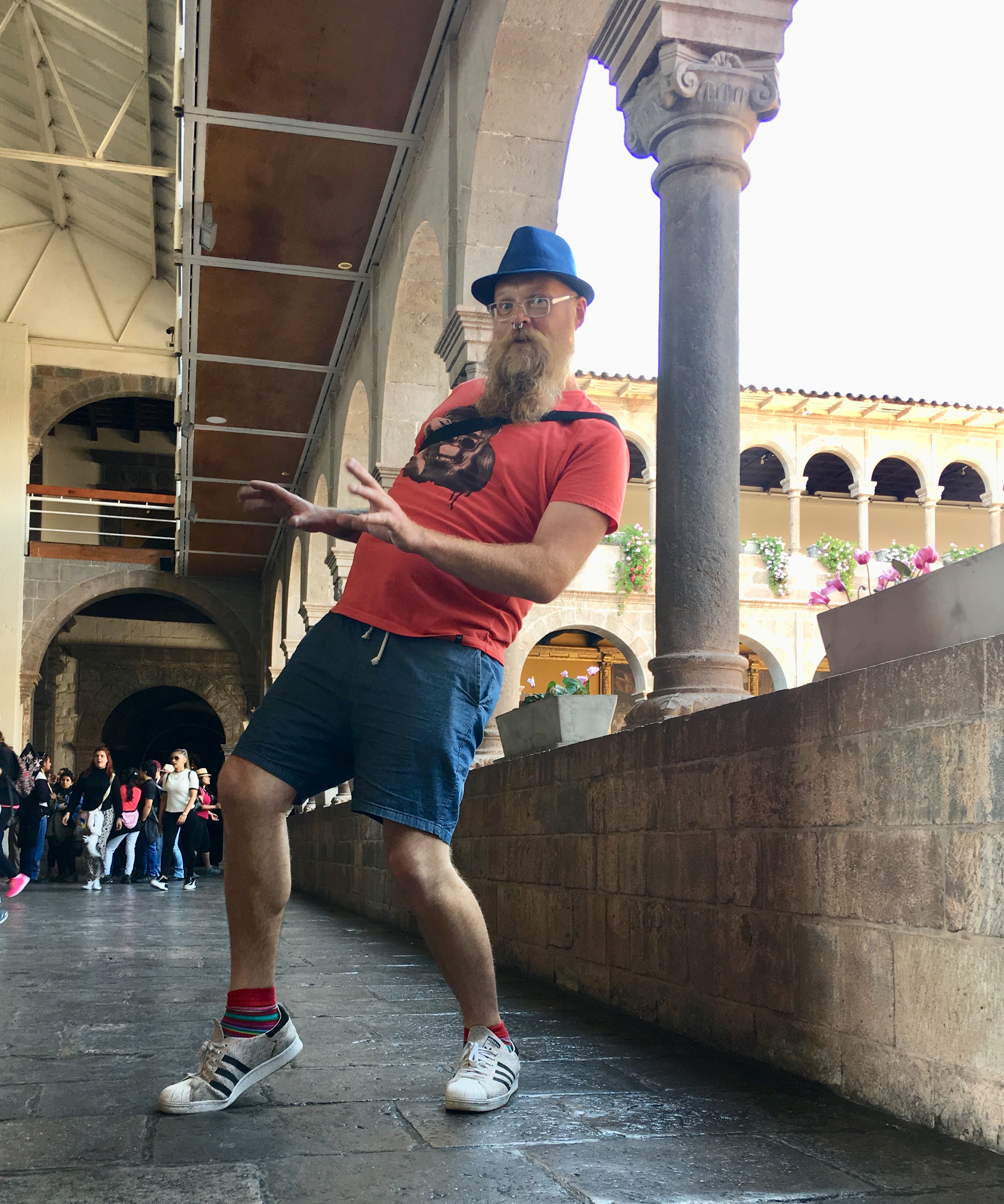 And I have broken them several times already. I didn’t use a flash mind you and I didn’t sit down or touch anything I shouldn’t as other signs informed me. Would be easier to just say no flash photography. Posting online and on Instagram allows us to share and tempt others to visit after all. 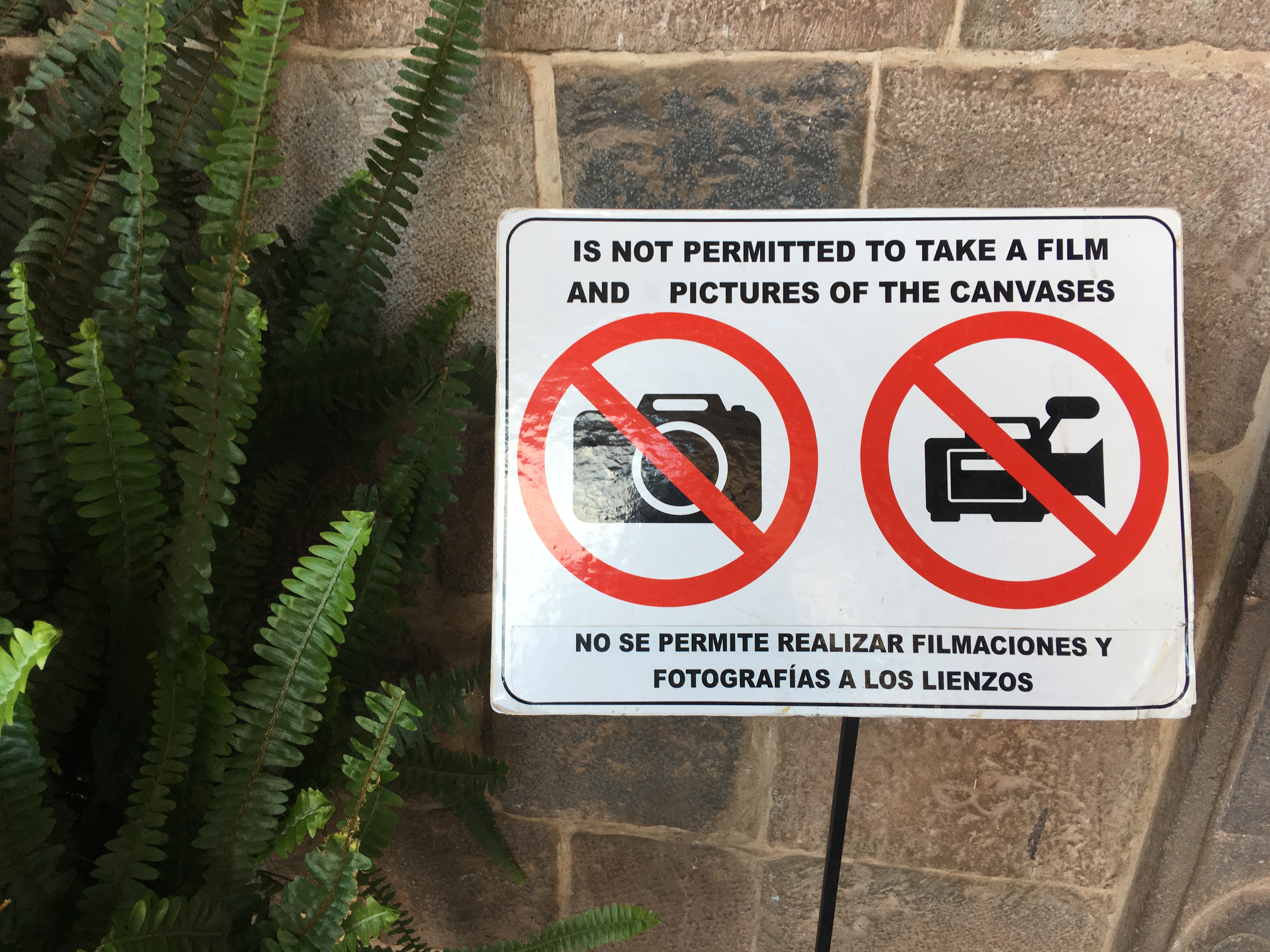 It wasn’t just the canvases but many parts of the complex were no photography zones so I had to be creative and illegal to bring you this blog. Don’t tell the authorities or they’ll send the tourism police to arrest me and trash my phone. 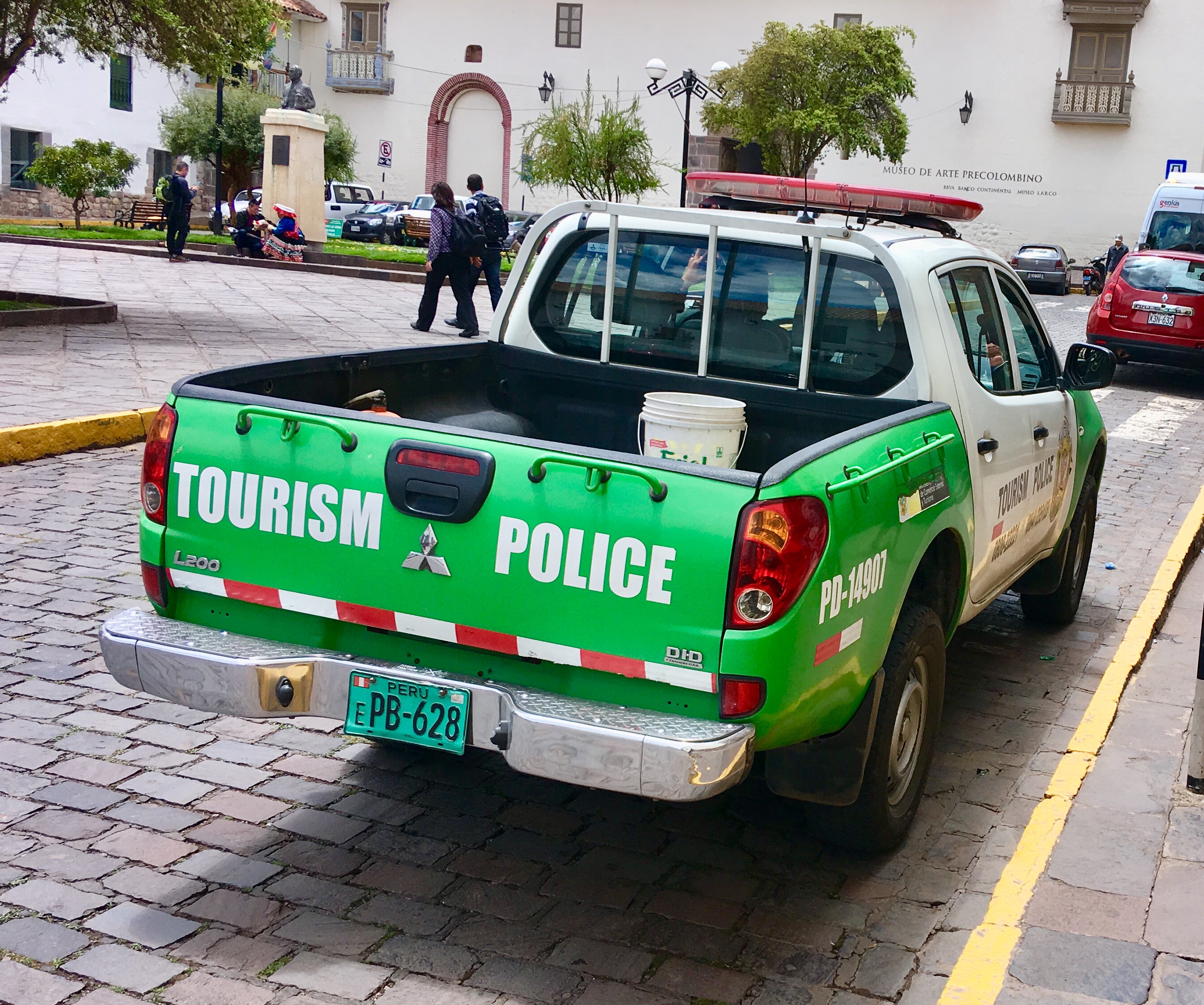